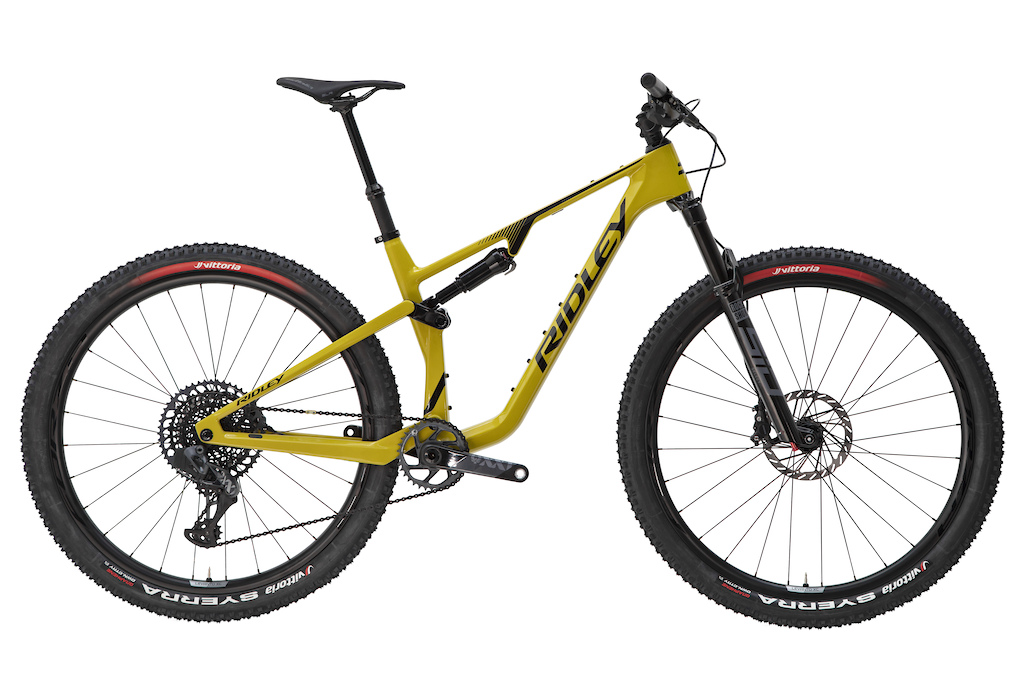 Ridley, much like their home country of Belgium, are perhaps a lot better known for their road and cyclocross exploits than their mountain bike range. However, they've released two new models to their range that, while far more suited to cross-country than more extreme forms of riding, are by far the most progressive off-road bikes Ridley have released.

The refreshed range is made up of two models: the Raft and the Prone RS. The former being a short travel 29” XC race bike, and the latter being a hardtail.

The Raft, according to Ridley, “absolutely shreds on rough and rowdy trails.” Which, even with the new wave of certified downcountry-fied short travel bikes seems somewhat out-there. In fact, a lot of the language used to describe the Raft could have been pulled straight from a Brett Tippie interview. 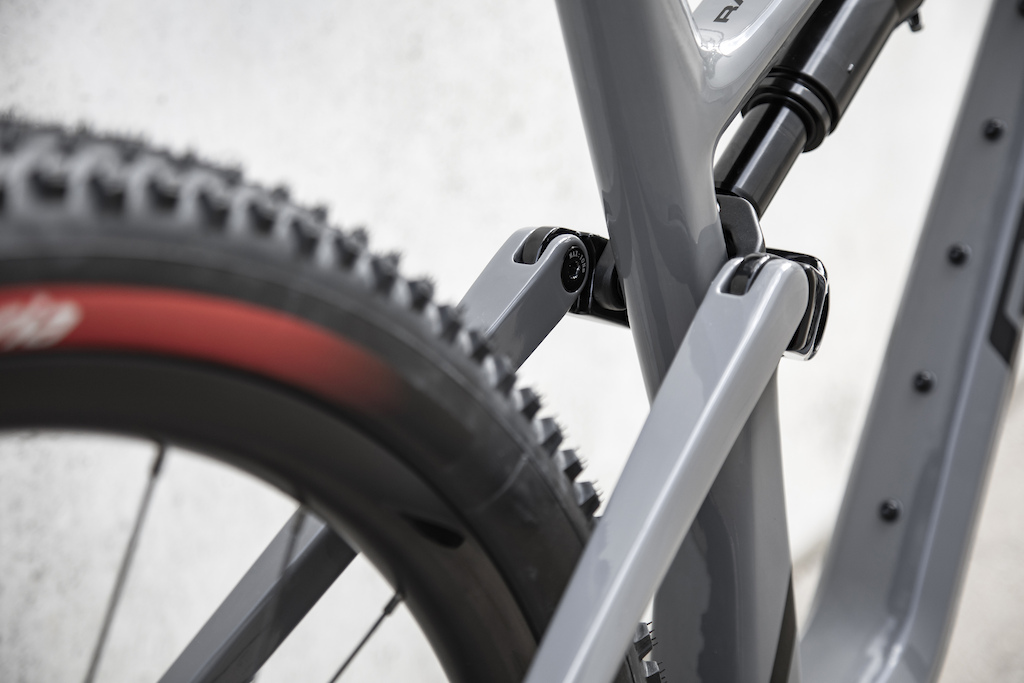 Changing the axle-to-crown length on any bike will tip the frame upwards and backwards, resulting in a slackening of the seat tube angle. The Raft is no different, and the 0.9-degree change in the head angle between the two models is repeated in the seat tube angle, with 75.1 and 76-degrees respectively.

The bike uses a flex-stay rear end, and makes use of seat stays without a bridge to give ample clearance. 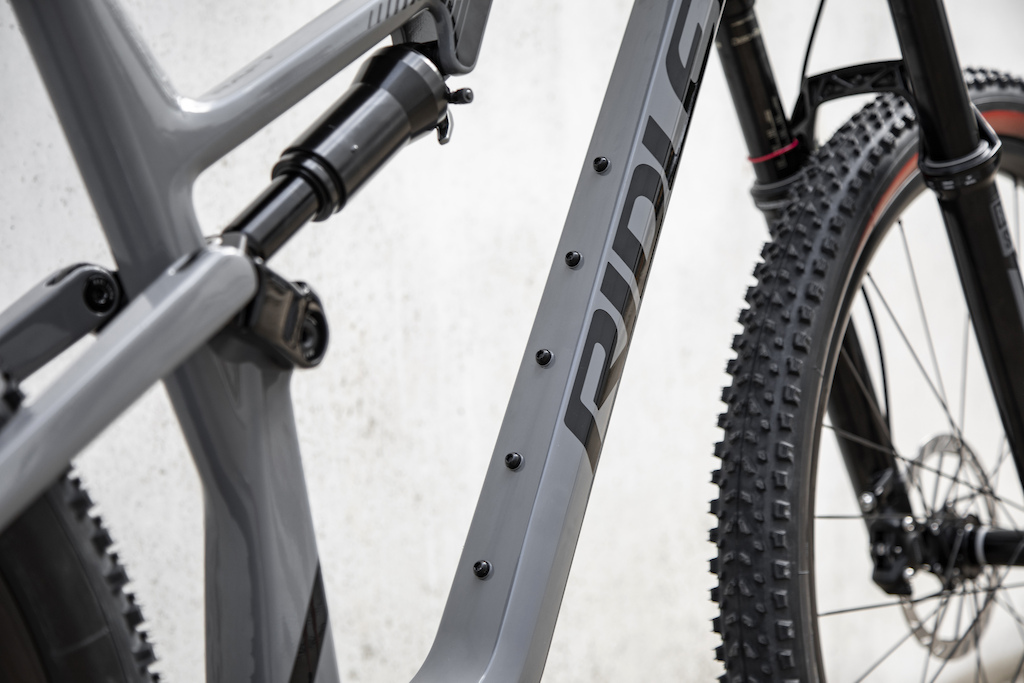 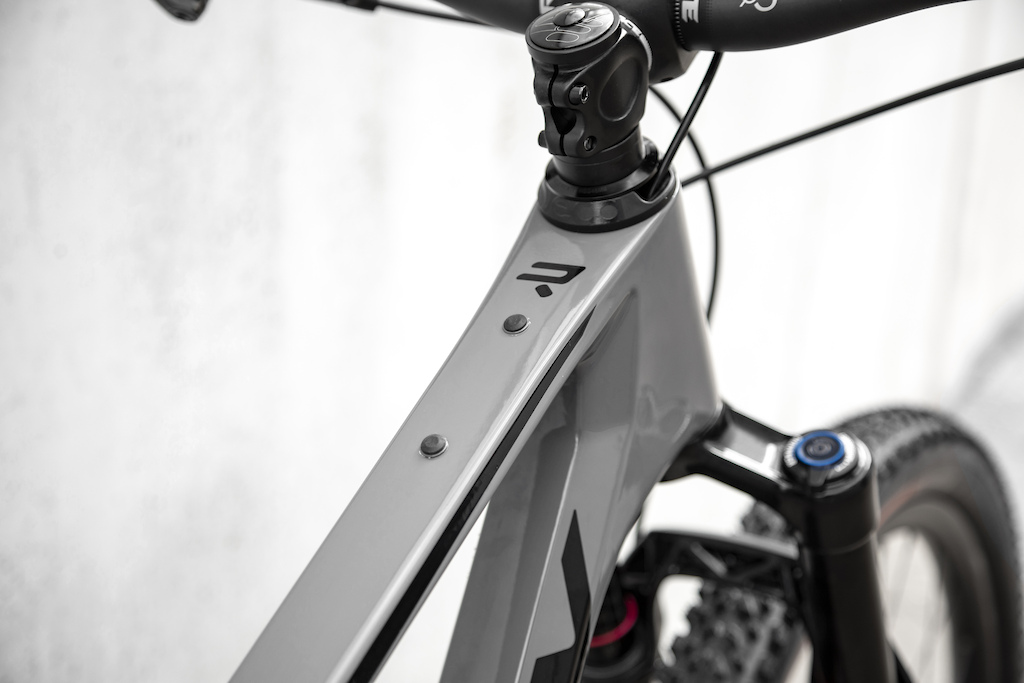 The frame also has mounts, and rather a lot of them. In all sizes but small, there are five individual mounts on the downtube, two on the seat tube and then an additional set on the top tube.

The Raft comes with SRAM’s universal derailleur hanger and will be available in stock in Spring 2023, and available in Ridley’s online configuration tool from January. 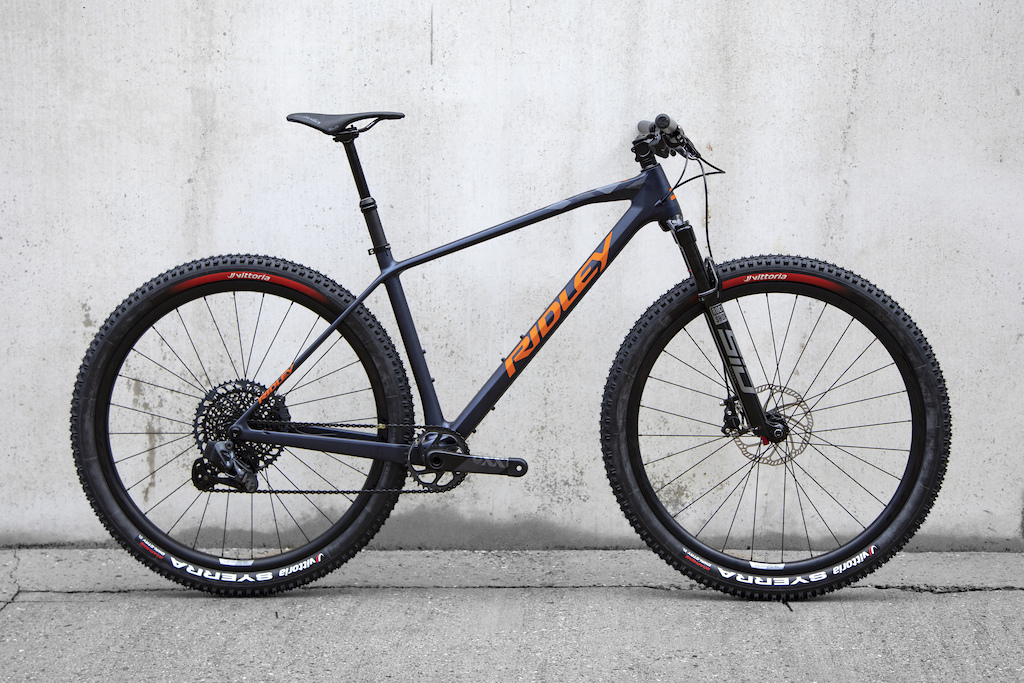 The other new release is the Probe RS hardtail. The bike, Ridley says, uses their Advanced Position Geometry, which gives the bike the best weight bias for tackling steep and technical climbs.

Similar to the Raft, the Probe is compatible with both 100 and 120 mm forks. The weight for an unpainted size medium is a rather svelte 760 grams. The Probe RS is equipped with a total of 3 bottle cage positions: two inside the front triangle and one under the down tube, and uses a universal derailleur hanger and has flat mount brakes, a BB92 and an integrated headset. 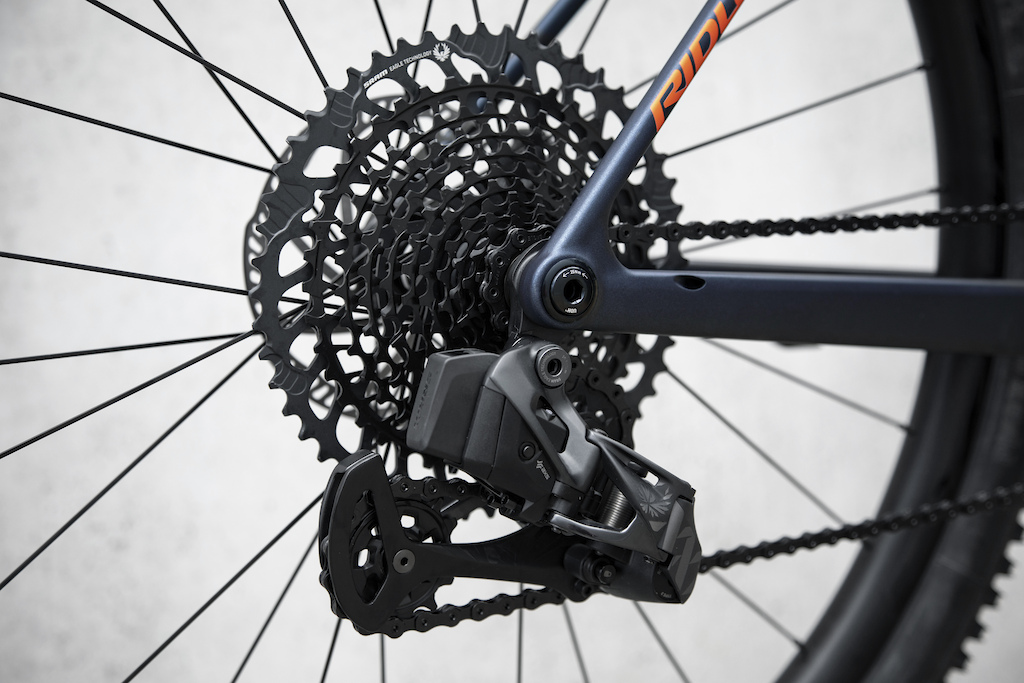 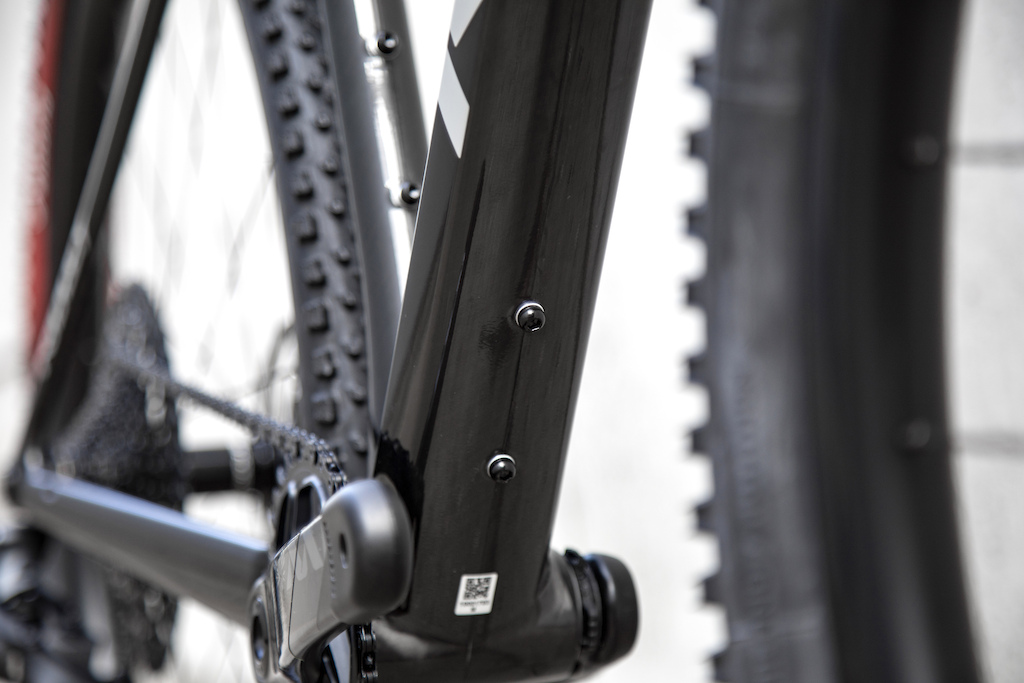 The Probe has the same lead times as the Raft for both stock and availability in Ridley’s configurator, and can be expected in early 2023. For more information please visit ridley-bikes.com

naisemaj (Oct 7, 2022 at 11:10)
Selling a hardtail called the probe gives away the intentions of the bike a bit too well. Does it come with a saddle?

By Odin's Spear I hope this trend dies soon.

sumbuddy (Oct 7, 2022 at 11:23)
Did Ridley consult @mikelevy when wondering how many bottle mounts to offer? That Raft has more than the original Grim Donut drawing

chaoscacca (Oct 7, 2022 at 11:39)
It takes a special breed of psychos to come up with partial headset routing.

DaneL (Oct 7, 2022 at 12:11)
At least they didn't route the rear brake through it. This way, you at least have the option of going with a wireless shifter and dropper to get rid of the headset routing. It's definitely not a good design, but they could have done worse. This is actually how I've been expecting manufacturers to use the headset routing.

WestC0astWanderer (Oct 7, 2022 at 11:23)
I love it when Road bike brands make Mountain bikes and through around all the buzzwords when they market them.

More like "How do you do, fellow mountain bikers?"

caltife (Oct 7, 2022 at 13:40)
My name's Ridley bikes and I'm here today To teach all you kids about the Mountain Bike Way I'm the raddest newcomer on the scene Since Scott dropped the Spark in 2016 Progressive geometry is way overrated Better stick with design cues that are allegedly outdated Absolutely shreds on trails that are rough and rowdy Even if my angles are looking kinda dowdy Listen up y'all to this hot lesson I'm about to teach There's way more to life than having super long reach Don't believe the hype about short seat tubes With a saddle in your ass your can still pwn all the noobs The most important choice you don't wanna regret Make sure your route your cables through your sealed headset Top it all off with some carbon copy flex stays And that's how you do the Mountain Bike Way

generictrailrider (Oct 7, 2022 at 17:23)
They definitely through those words around.

Rexuis-Twin (Oct 7, 2022 at 11:41)
You're right, that's quite a bit. Maybe the next feature for the industry is a swat water bottle (swater?) system. Possibly route the drinking tube internally through frame, and out through the headset.

vinay (Oct 8, 2022 at 14:04)
Can't we just be happy and consider this bike a compensation for when a bike without bottle mounts is being released? I suggest Pinkbike does a long tern review making full use of the mounts. And then start moaning about a lack of internal frame storage. And of course reveal what the probe has discovered. And test how well the raft floats.

Danmcdan (Oct 7, 2022 at 13:50)
So if the frame is a flat mount brake, and the fork is a post mount brake…..are brake manufacturers going to get on the mullet bandwagon???

st-alfie (Oct 7, 2022 at 16:50)
Riding a probe is rarely a personal choice. Perhaps Ridley are planning on just turning up and forcing people to take it.