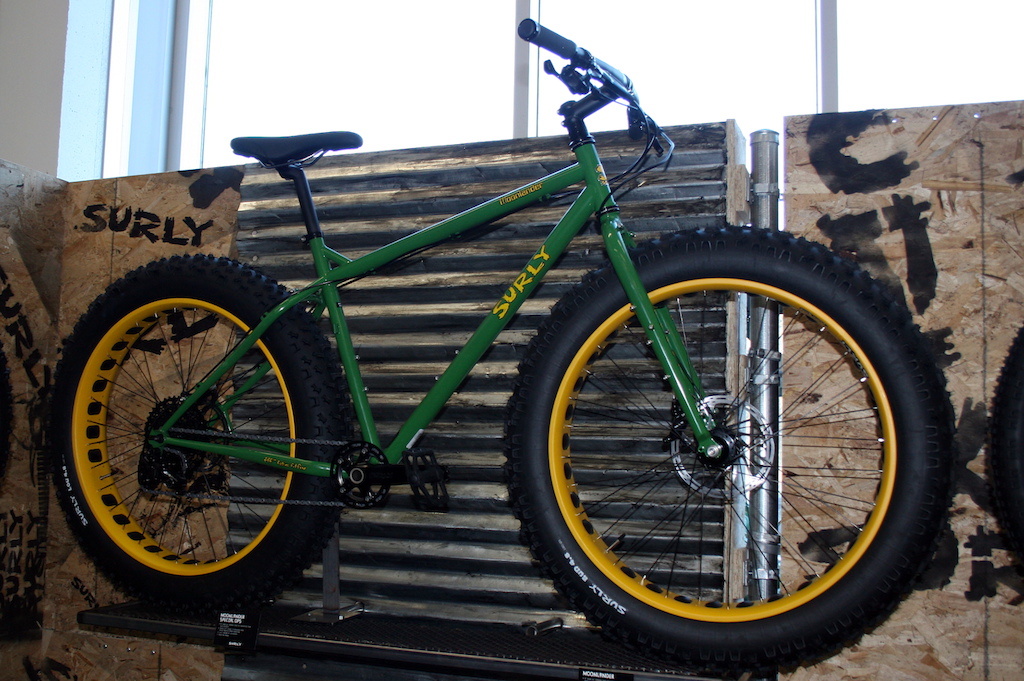 A main frame made from 4130 and 4.8' tires than run below 15psi, Surly's new Moonlander Special Ops was one of the fat bikes on display that seemed to be everywhere at Frostbike 2015.The Moonlander Ops has 1x Sram drivetrain with a X-Sync licensed, narrow-wide stainless steel chainring.
Fat bikes might be thought of as a blessing or an abomination depending on your current bike and point of view, but like bikes, opinions tend to change and evolve over time. That seems to be happening as fat bikes are approaching critical mass and gaining more and more traction with the general mountain bike crowd. The top brass at bike manufacturers and retailers are likely salivating at the money-making potential when a whole new sales category is exploding. Living in a generally snow-free part of Canada known for its technical forest trails, fat bikes might be viewed with a strange detached curiosity. However, for lots of off-road riders in other parts of the world fat bikes have enabled them to continue riding in all types of trail and weather conditions year round. Along with the snowshoe effect some fat bike fans claim the large volume super low pressure tires provide unparalleled stability and traction. Where it all goes we'll just have to wait and see.The rise of fat bikes has hopefully expanded the realm of cycling as opposed to cannibalizing it. 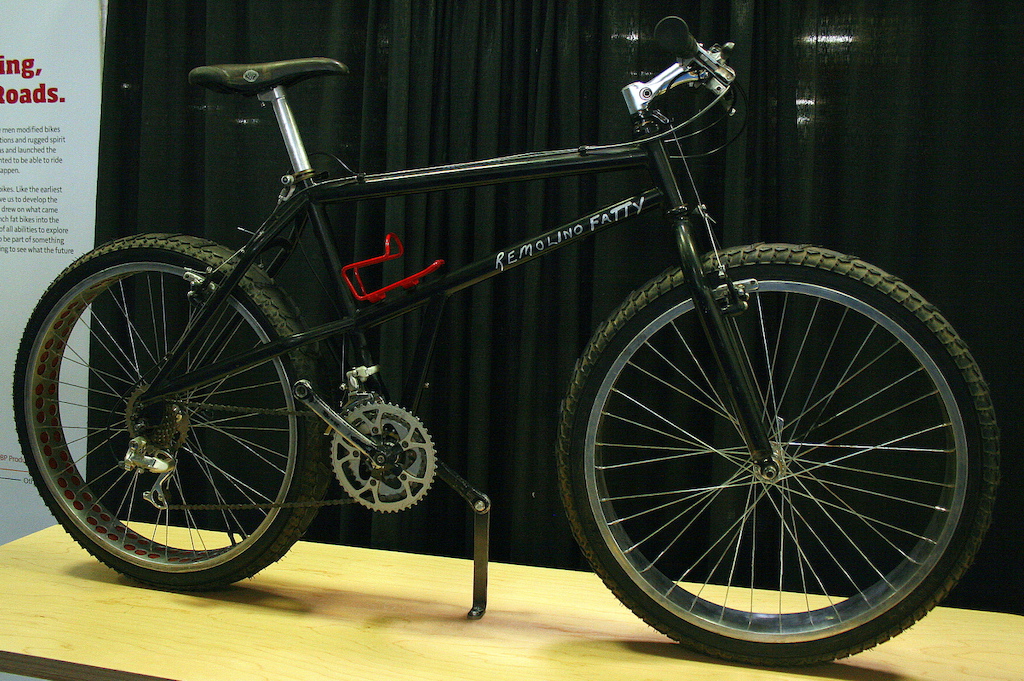 Ray Molino's superwide rim back in the late 80"s replaced the bizarre concept of joining two rims side by side to stay on top of he snow or sand. The Alaska Iditabike was a tough testing ground for new ideas. 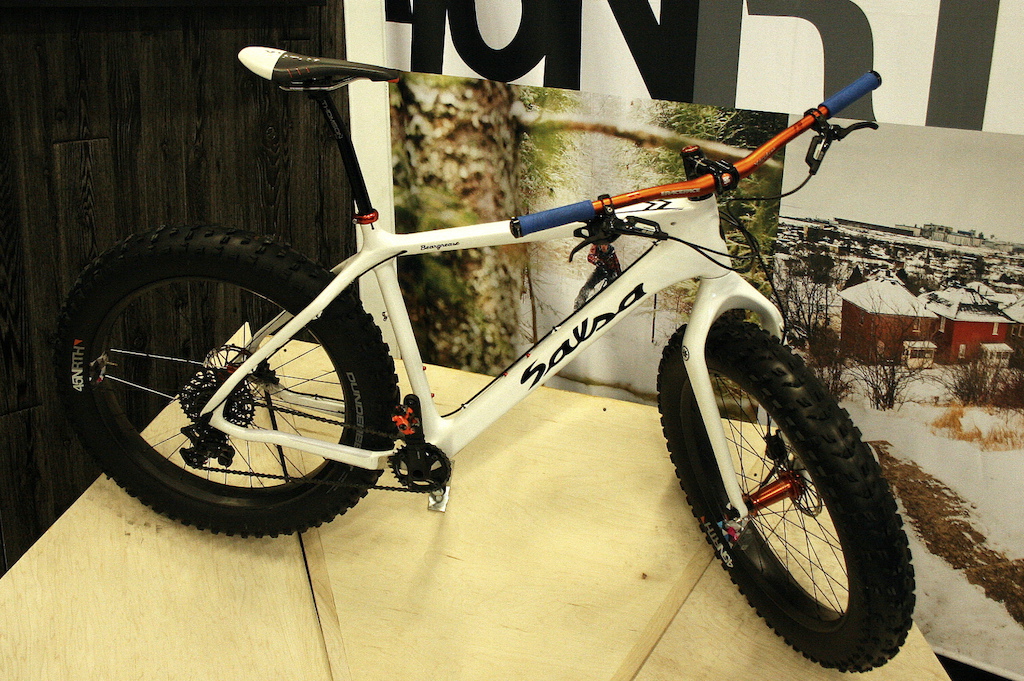 Under 28lbs, the Carbon Salsa Beargrease is light and refined for a fat bike, more race ready than an utilitarian go anywhere backcountry machine. $3700USD 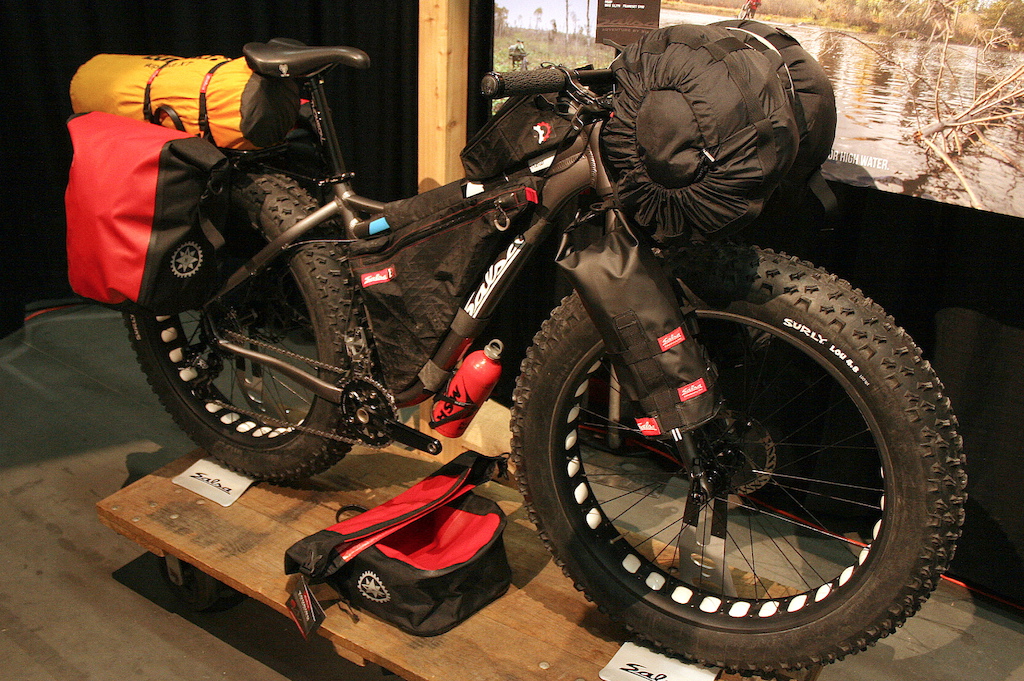 Fat bikes can be fully equipped for backcountry survivalists or world travellers. 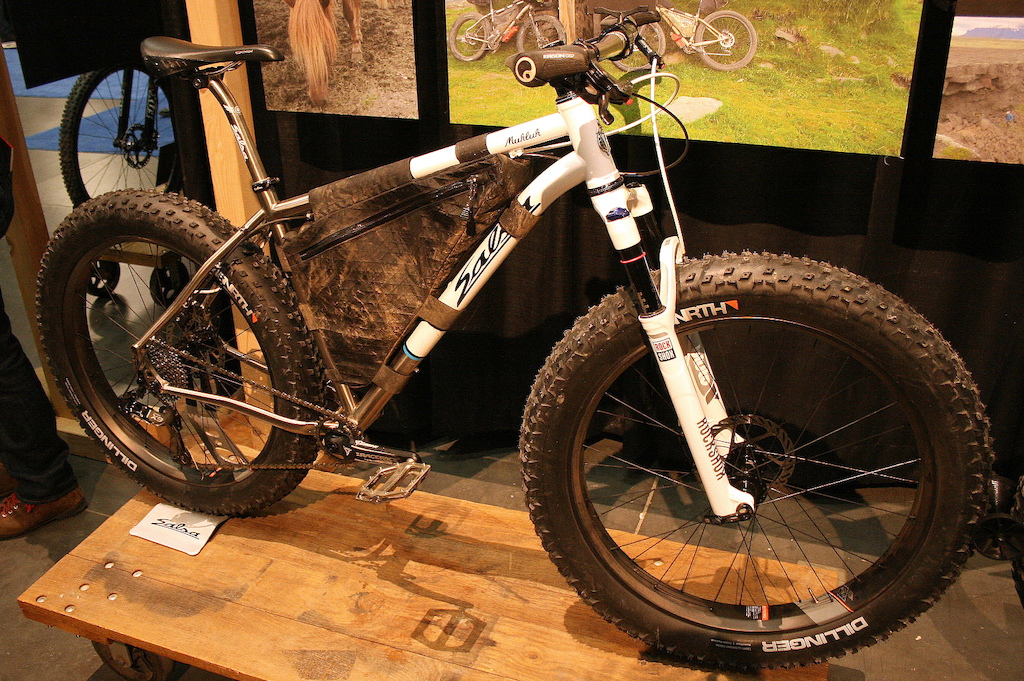 A 26" wheels that roll like a 29".The Mukluk Ti with alternator dropouts for $4900USD. Super wide 100mm travel RockShox Bluto that provides a real front suspension option for fat bikes. 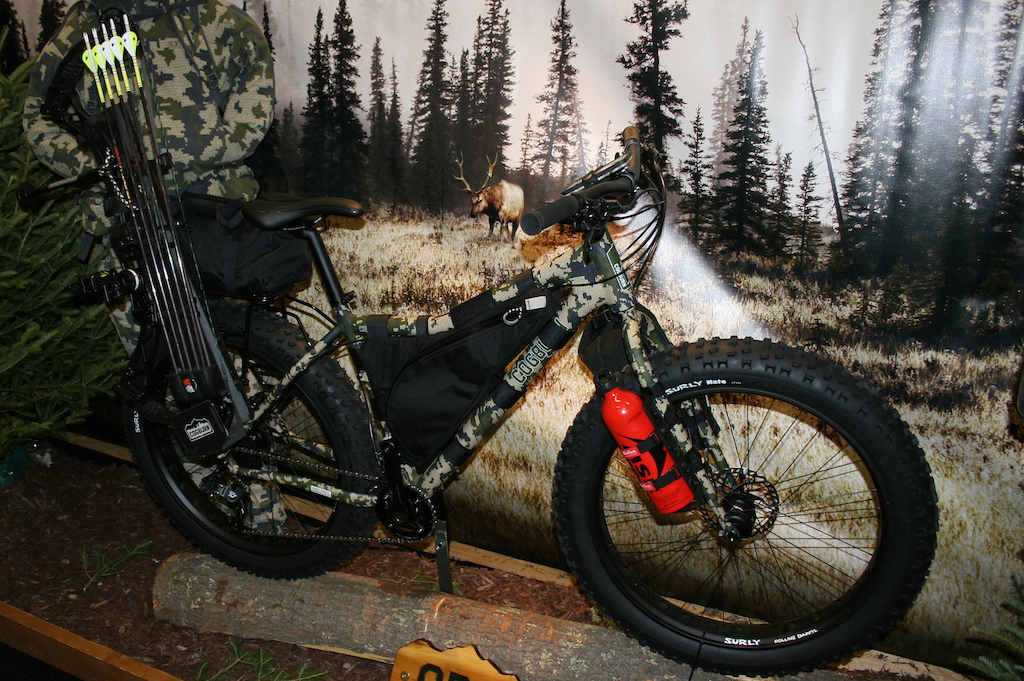 Cogburn CB4 human powered all terrain vehicle - Gun rack not included. That deer won't hear or see you coming but neither will the grizzly bear. You can't deny these folks are pushing the limits of cycling. 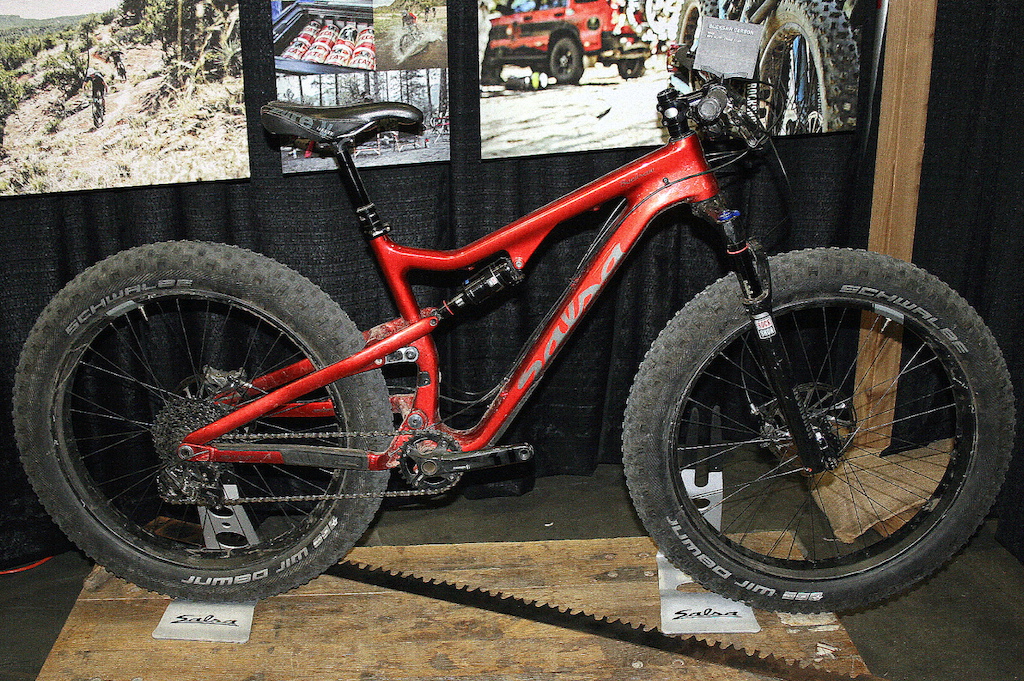 Salsa Carbon Bucksaw with split pivot suspension and Reverb stealth dropper post sells for $6500. To be seen on a technical descent near you? 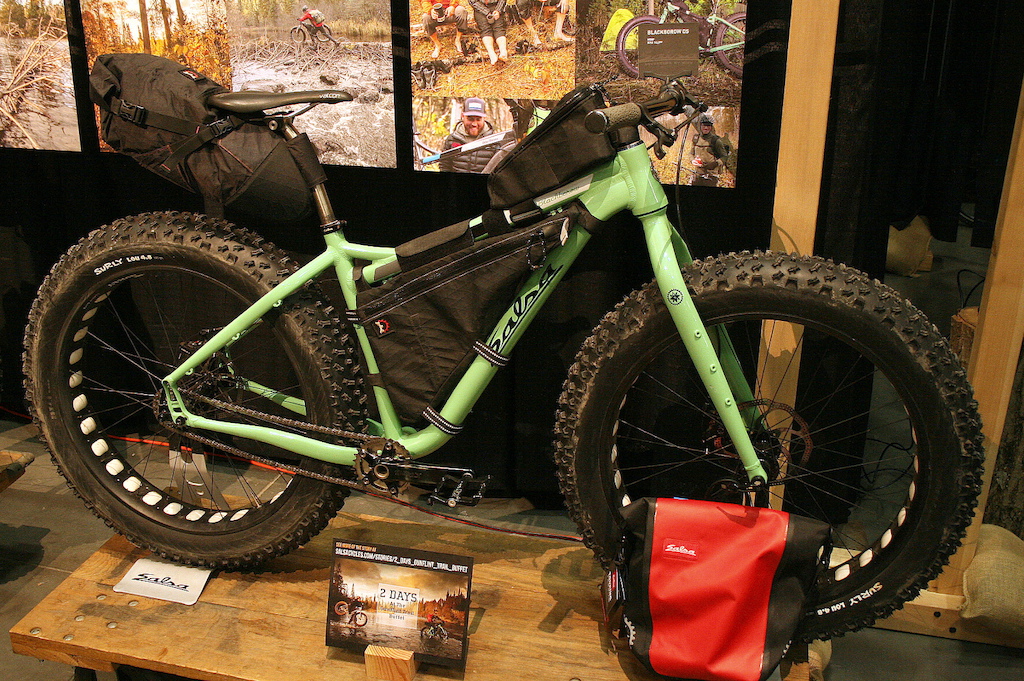 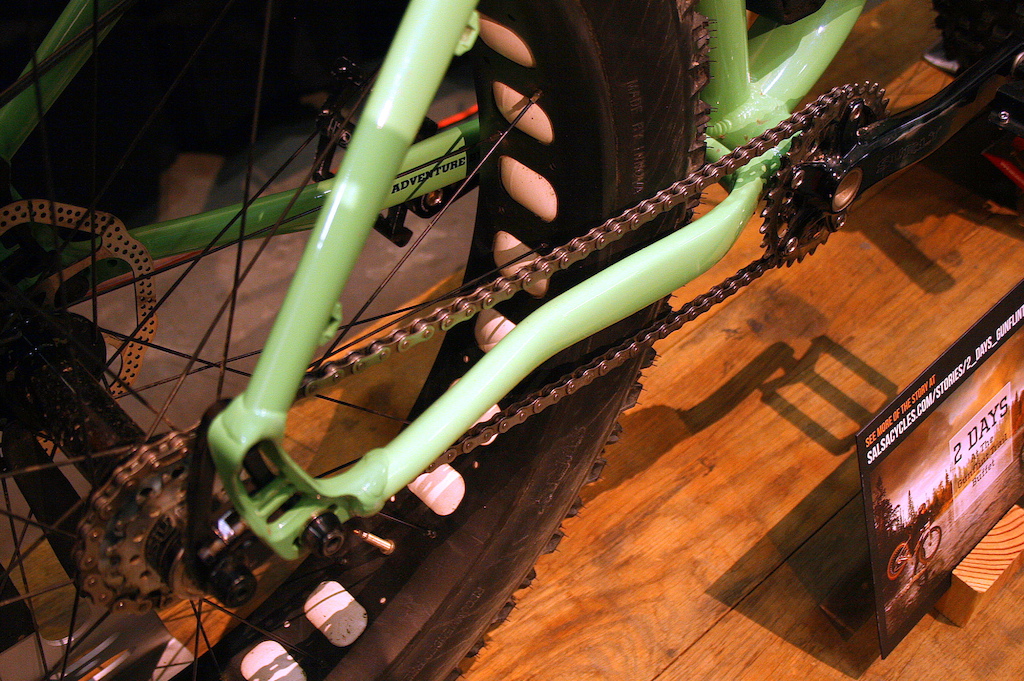 Shifting simplified. You get one high and one low gear by swapping positions by hand. Chain length and tension is matched for both gears, but you can also adjust the dropouts. 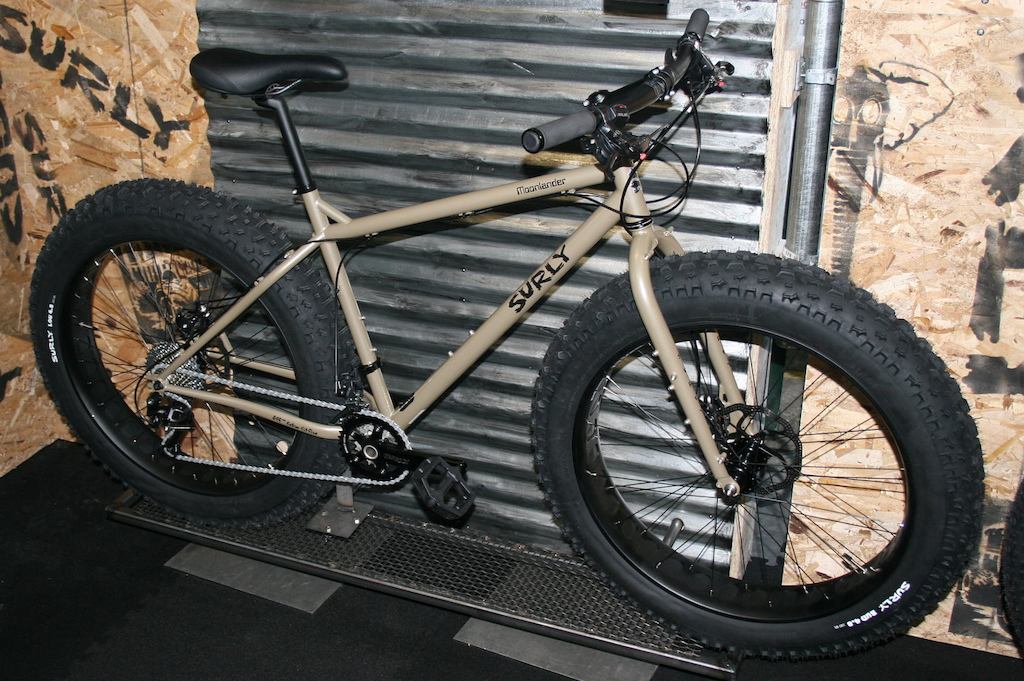 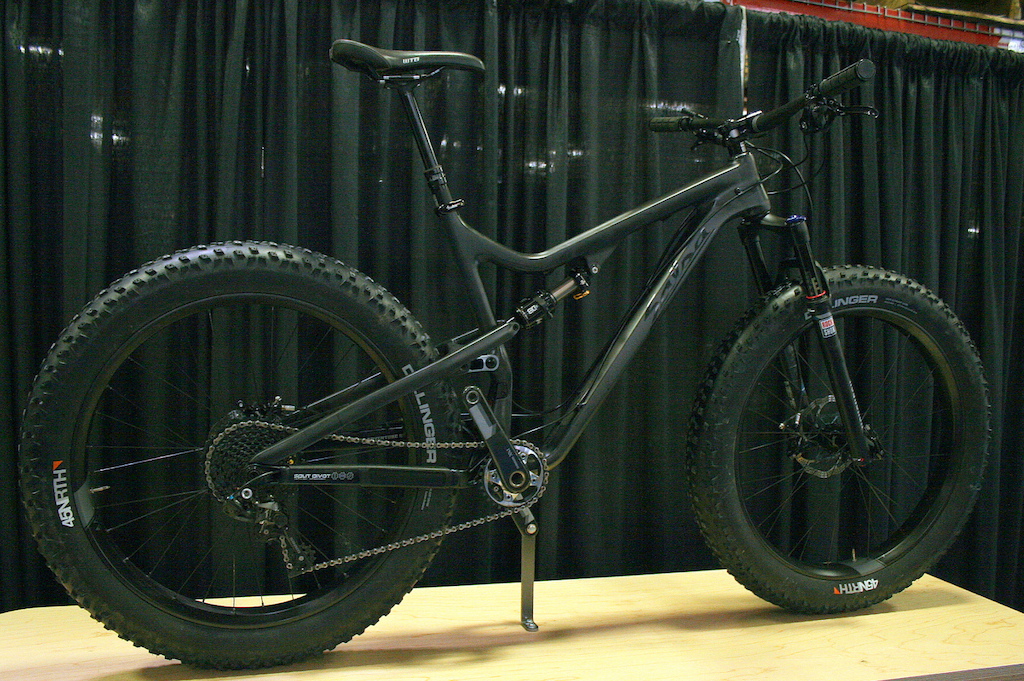 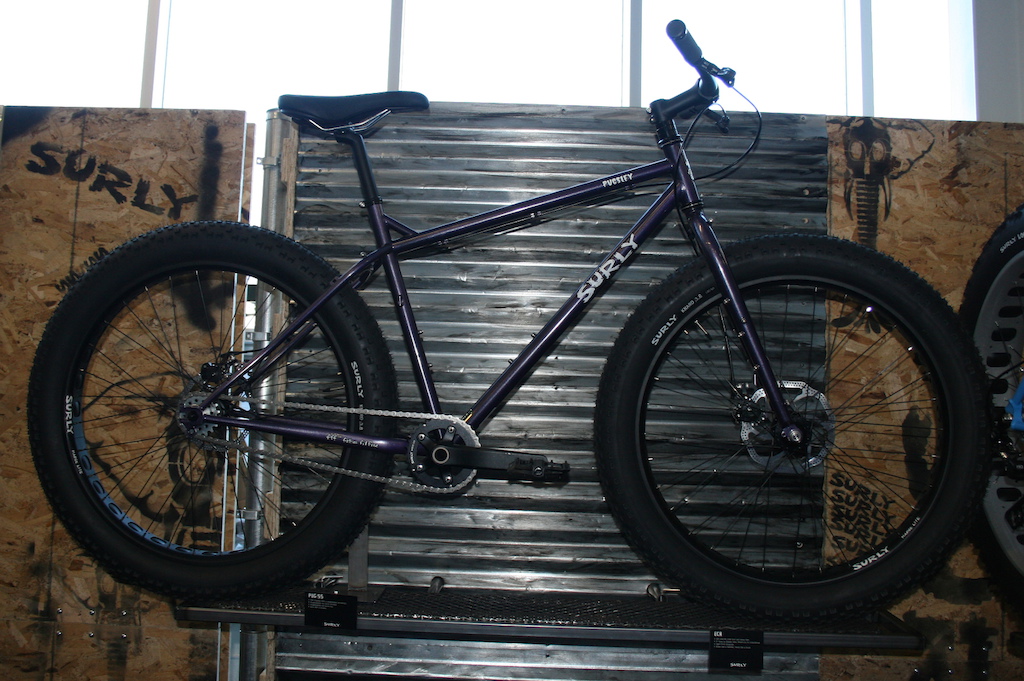 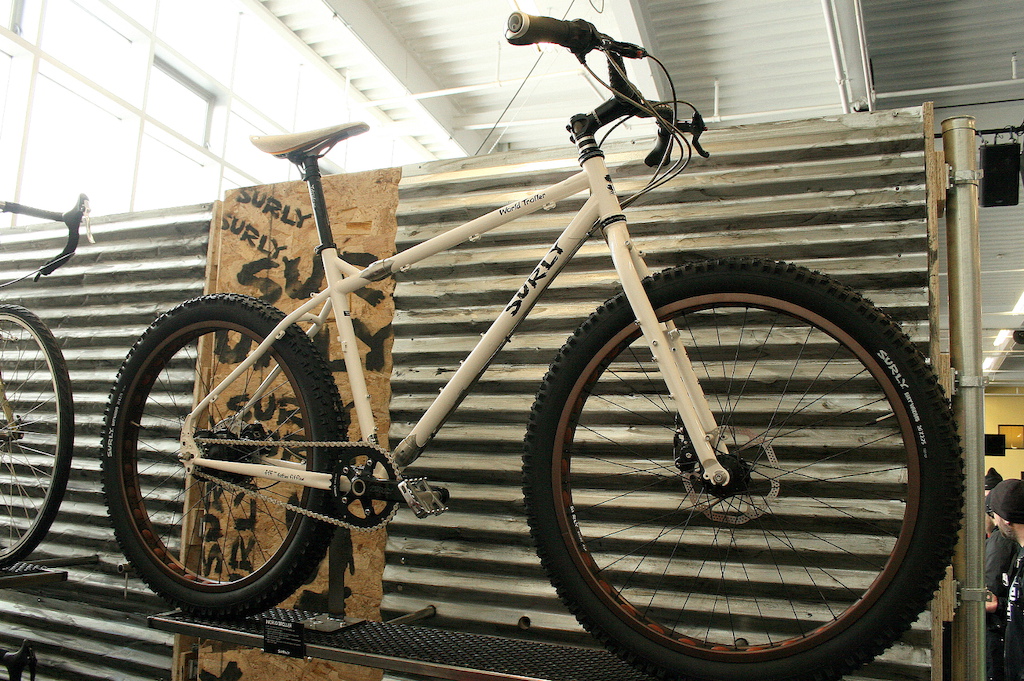 Surly World Troller designed for travellers has two couplers to fold and go. 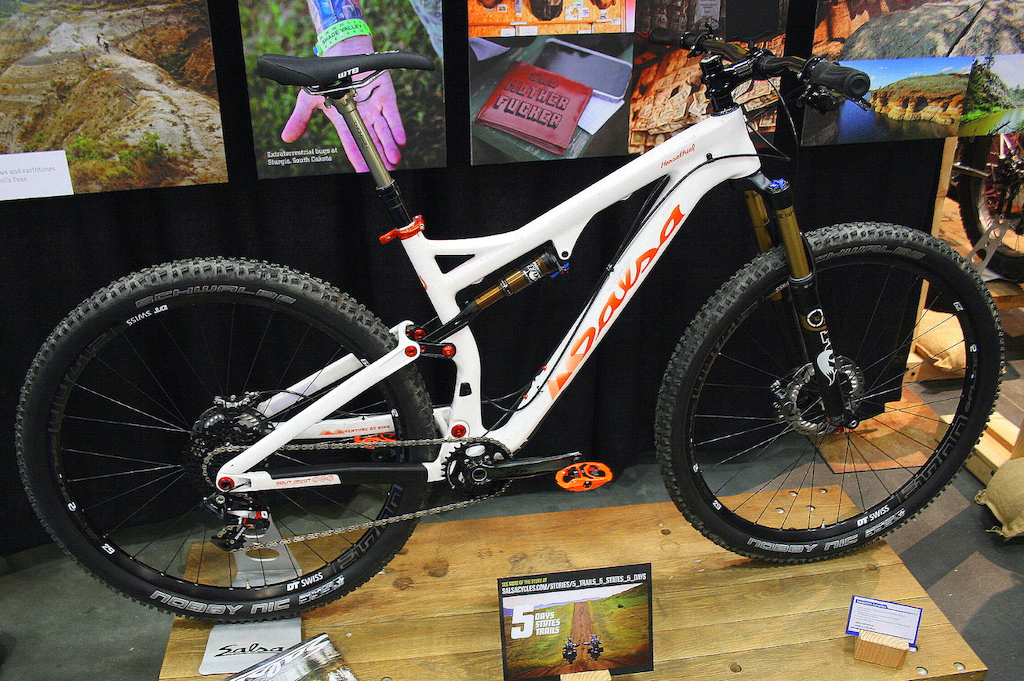 Its not a fat bike, but the Salsa Horsethief made an impression. 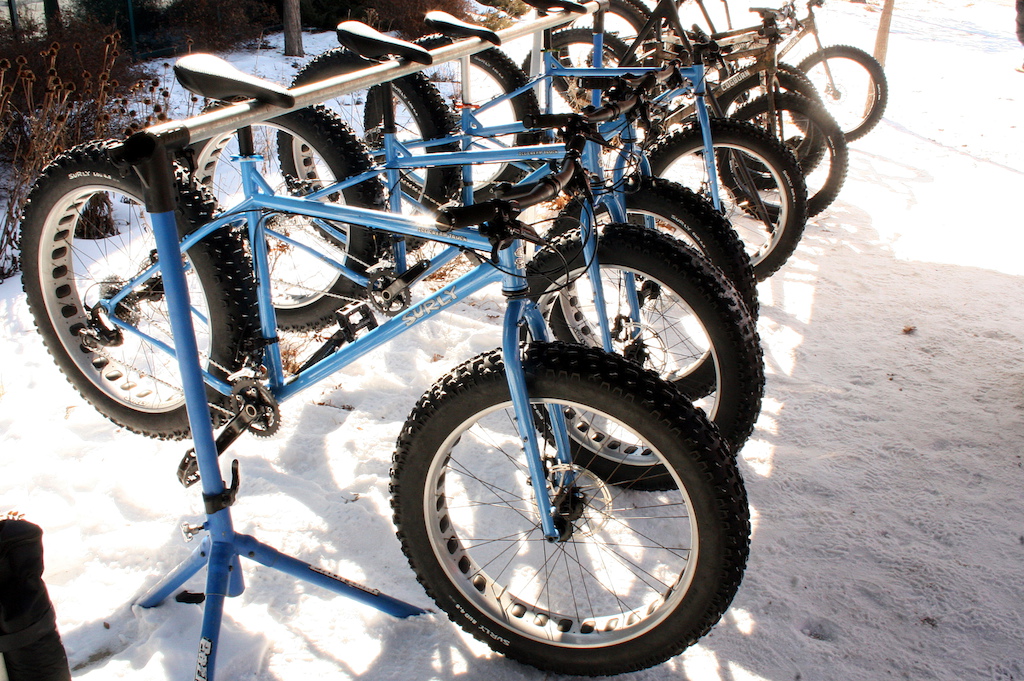 The Frostbike crowd had the chance to put on a helmet and take a Surly Ice Cream Truck out of a ride in the snow.

dtax (Feb 26, 2015 at 10:49)
Putting that regular bike picture in there is like when a regular looking girl hangs out with fat ugly girls just to make herself look better....

mfbeast12 (Feb 26, 2015 at 21:46)
1) you gotta admit the blacked out bucksaw is sexy as f*ck.
2) that horsetheif (the "regular bike") is one of the hottest bikes I have ever seen. holy shit. also the first bike that has made the new XTR cranks look cool. wouldn't change a thing on it except the cockpit.

getschwiftyclub (Mar 1, 2015 at 19:40)
@mfbeast12
Agree with you 110%
1) Never thought Fat Bike and Full-Suspension should ever go together or look good but...
2) The Horsethief frame has such great lines, except for that stem.

rrsport (Feb 26, 2015 at 10:59)
I saw a full sus fat bike the other day down the local downhill trails absolutely shredding, he was over taking guys on dh bikes while hitting all the biggest features on the track. While it looked really weird, have to say he looked he was having a hell of a lot of fun while showing everyone that it's not the bike but the rider that makes you fast

ryan83 (Feb 26, 2015 at 14:41)
This genre is not about speed but about fun. Bigger tires enable you to ride trails you may never have before or during winter months when you are relegated to the trainer or god forbid some other sport. They also allow you to take lines that would have other wise seemed stupid on a more normal trail bike. Because of this I've got one of these clown bikes on my radar...

flipoffthemonkeys (Feb 26, 2015 at 12:18)
i did a fatty demo last week. once you get used to them they are really fast-tires just stay glued to the ground, and they have a weird tendency to over steer. drifting is not an option. lots of fun.

skiomax (Feb 27, 2015 at 11:38)
Shifting simplified. You get one high and one low gear by swapping positions by hand. Chain length and tension is matched for both gears, but you can also adjust the dropouts. how is this worthy of a bike might as well have a single speed... not a fan of the concept look like the disigner forgot to put deraileur in place.

mhoshal (Feb 26, 2015 at 15:20)
That world troller though like did you steal the front end off a Walmart bike thats just fugly in so many way. all the other bikes look sick though!!!

So you get a steel rigid bike with no gears and you pay 10x more than an equivalent 26" wheel bike because it's got fat tyres?

You're telling me that those tyres and wheels are worth a £900 hike in price?


It's insane that anyone would pay that sort of price for what is essentially a supermarket special with big tyres.

Not my cup of tea at all.

enduroelite (Feb 27, 2015 at 6:49)
I would ride the tires off of any of these bikes. You would need to have an equally long snow season as you do warm season to appreciate these beauties.

Canada has exactly that and plenty of trails to go with it. The only wast of money I see here is driving my car to the store to but one of these.

BTW I don't drink tea, I drink coffee, then whiskey then beer, then coffee again. Tea is for "bloody wankers"