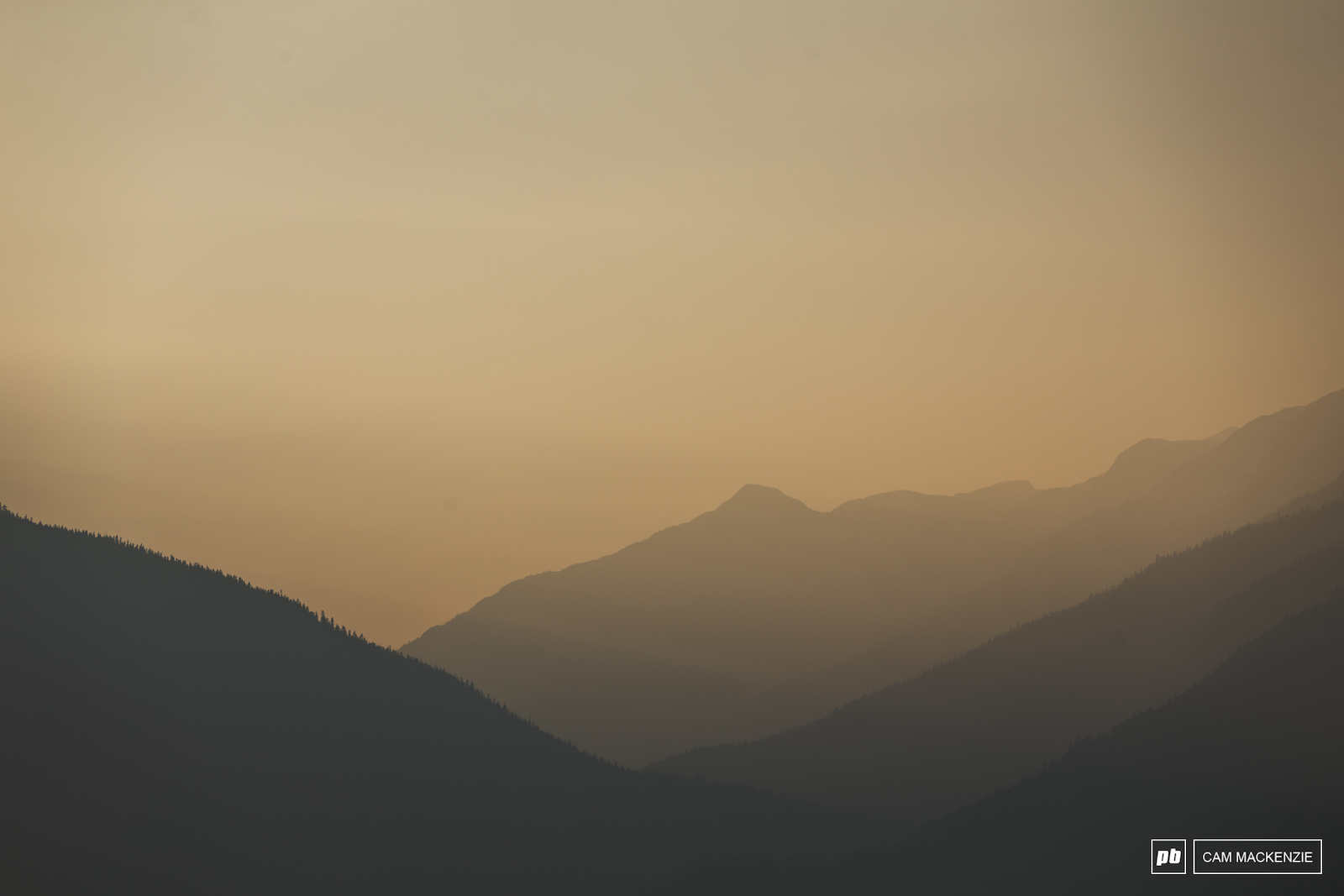 After the sunbleached Whip-Off World Championships over at Crabapple Hits earlier in the day, there was little time for riders to take a rest before hitting the pristine RockShox Ultimate Pumptrack Challenge track to the side of the Slopestyle course on the infamous Boneyard hillside.

As riders drew closer to the semi-finals things began to speed up and hot up under the unusually clear evening Whistler sky. For the overall Pumptrack World Championship, the winners revealed themselves early on. In the Men’s field, it was a French battle between Thomas Lemoine and Chaney Guennet who were tied at 250 points going into the event. With Guennet managing to cross the line 0.06 seconds up from Lemoine in the first heat. Not a bad deficit to make up on but in the second heat Lemoine looked nervous and when the gate was down it wasn’t too long until Guennet sped ahead. The nerves took their toll and Lemoine would end up losing his line on the final straight, as well as his bike. Lemoine would eventually limp home and gift the overall title to Guennet.

In the Women’s overall competition, it was once again Jill Kintner who reigned supreme, although being on 400 points compared to Kialani Hines on 275 it wasn’t going to be too difficult, particularly as Hines was suffering from a broken rib going into the competition. Kintner would face Hines in the semi-final and would comprehensively take the win in the heat and the overall title. 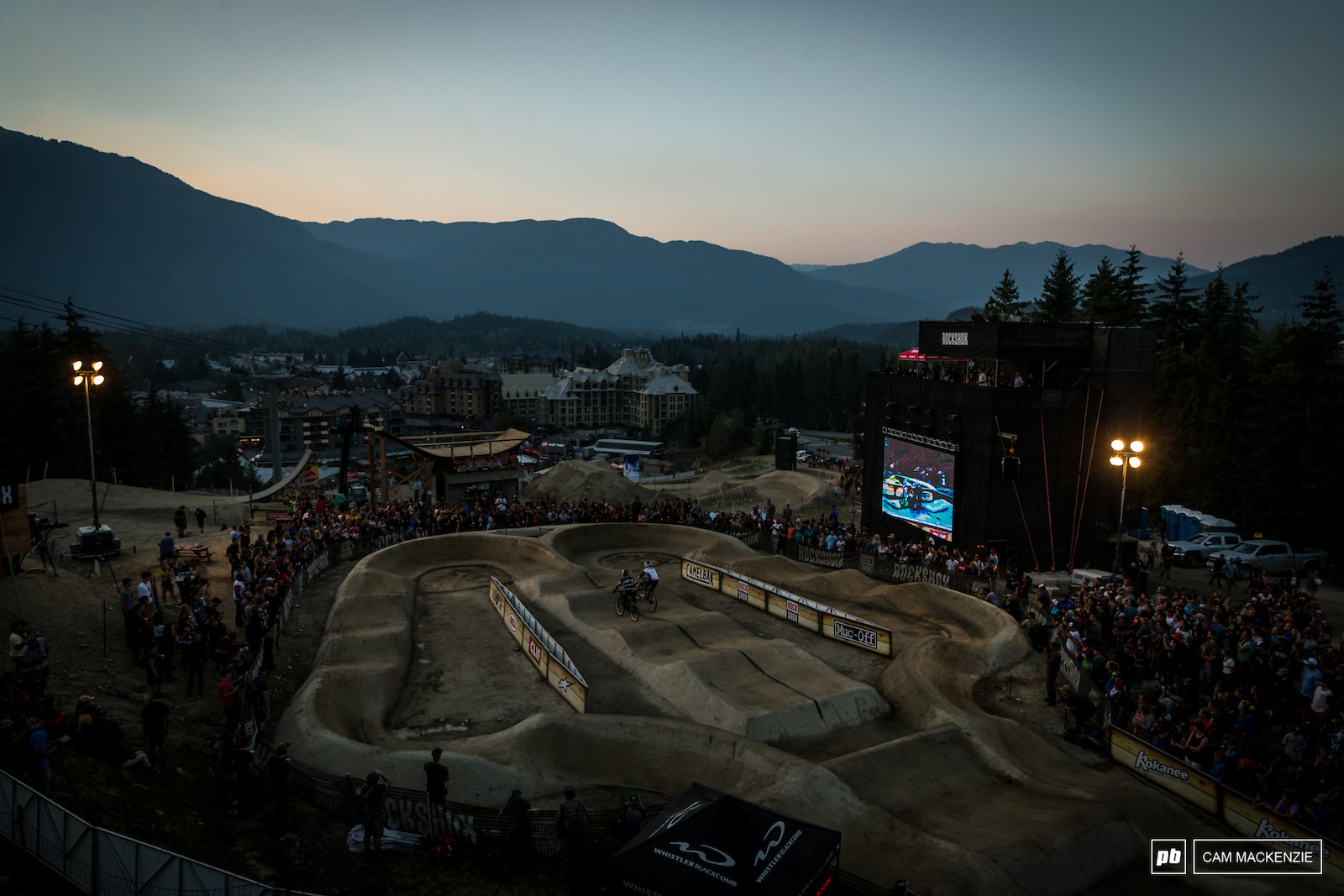 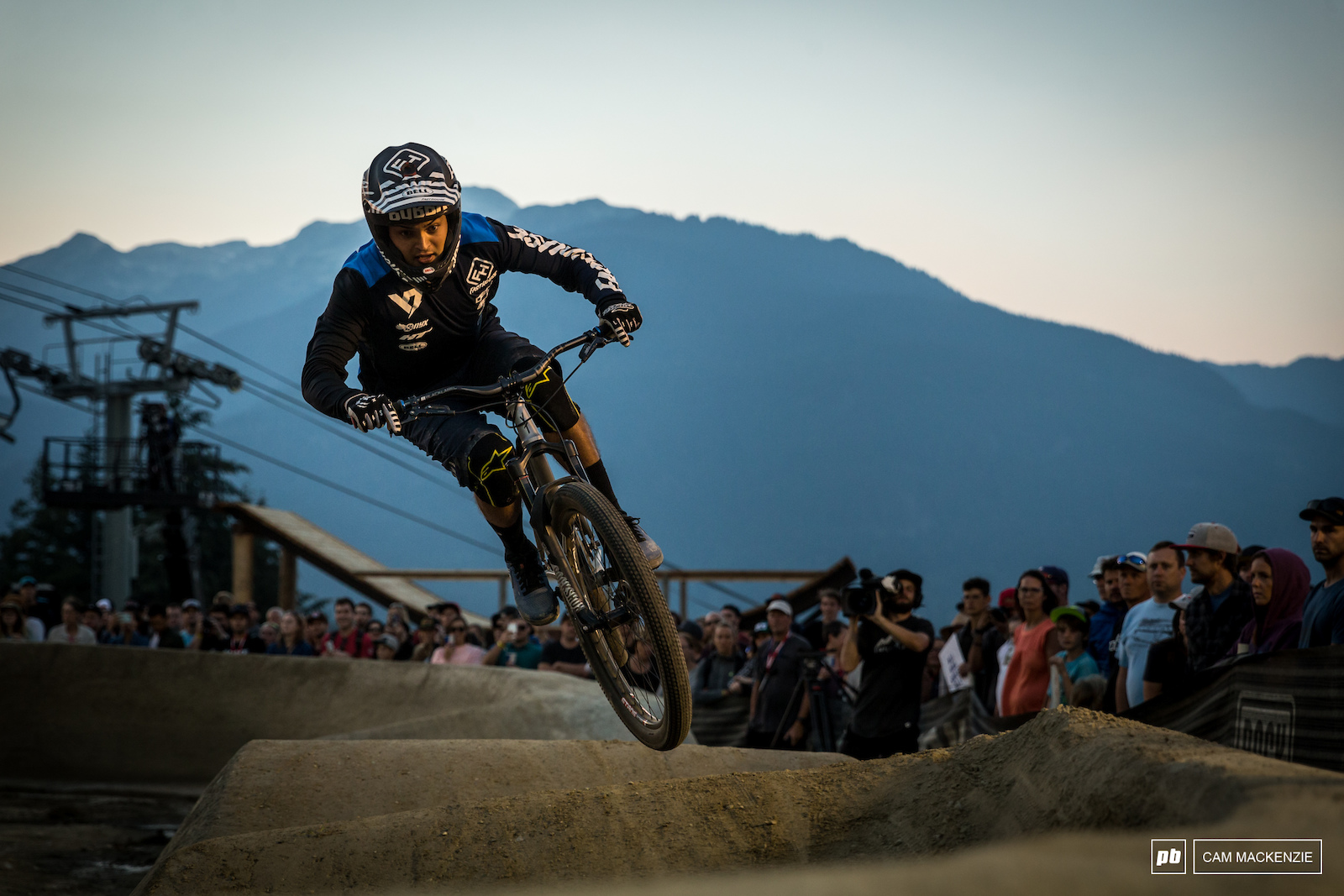 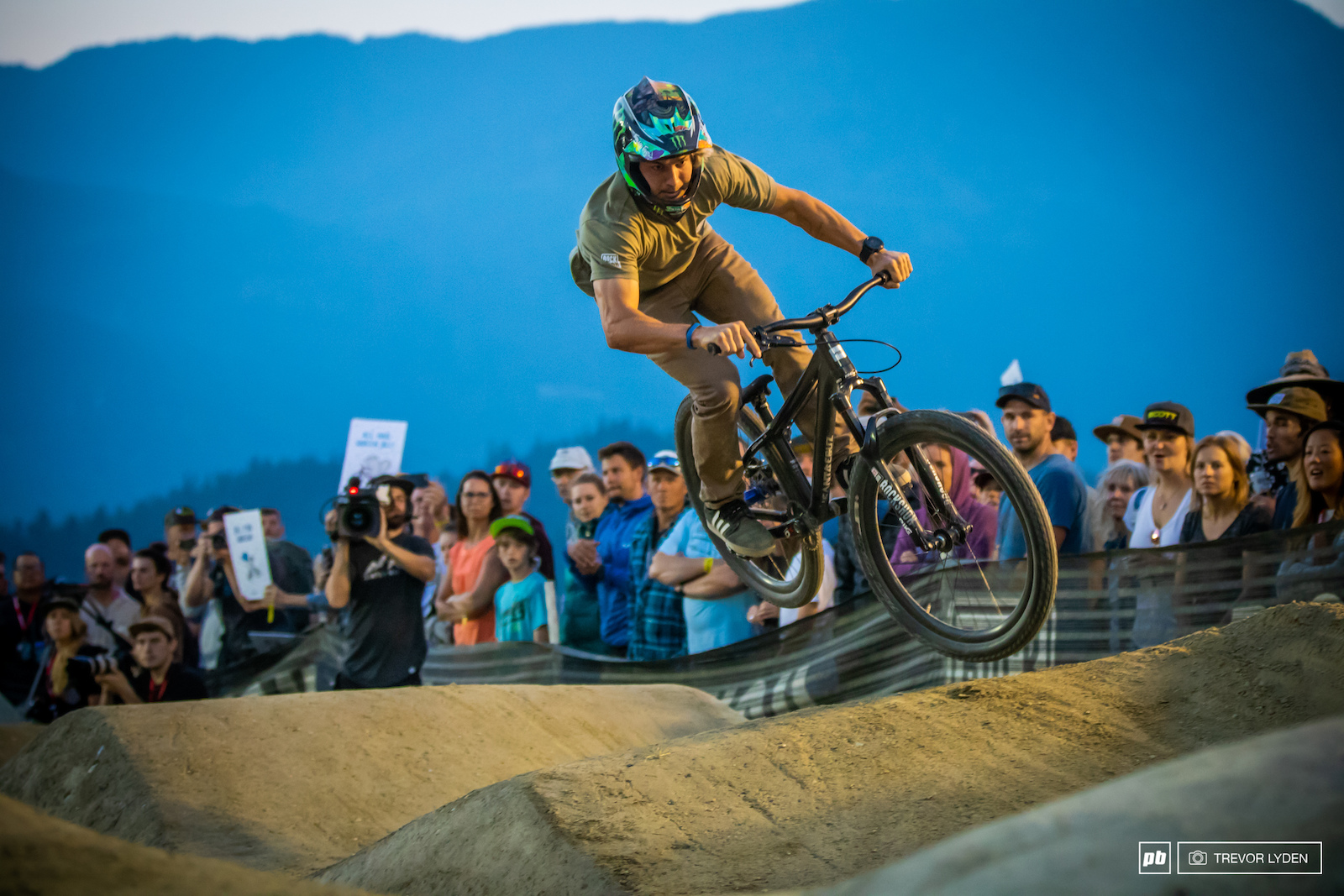 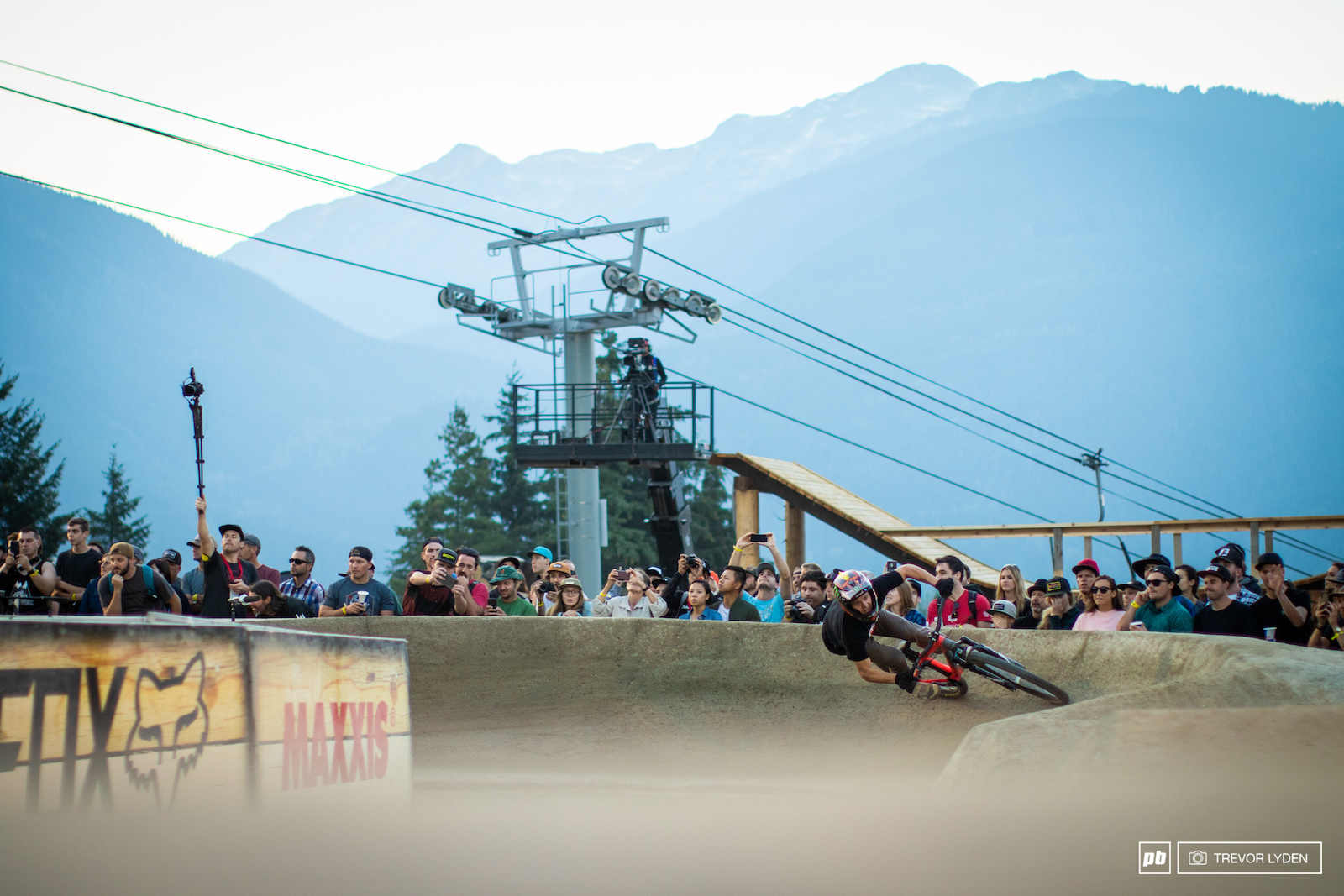 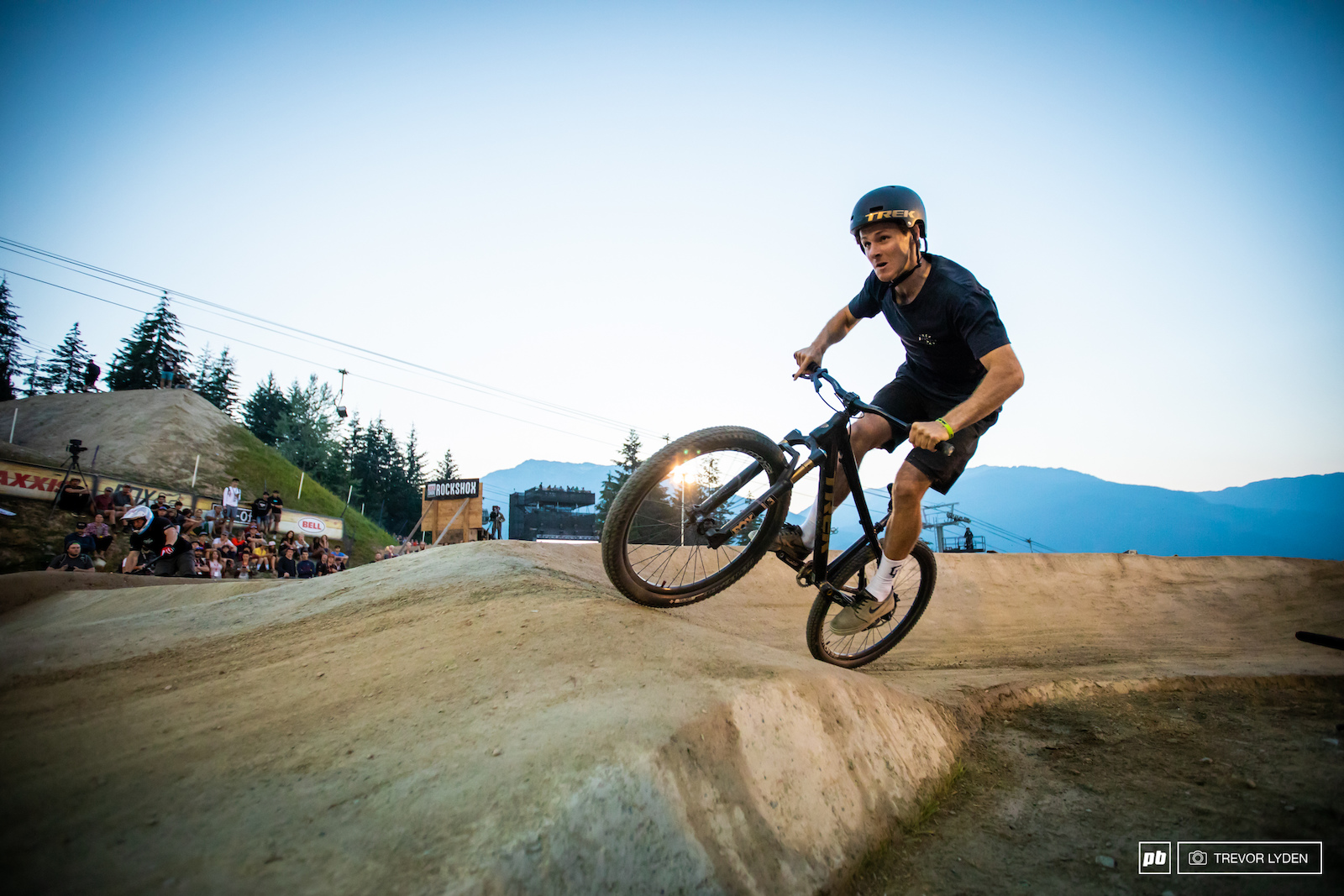 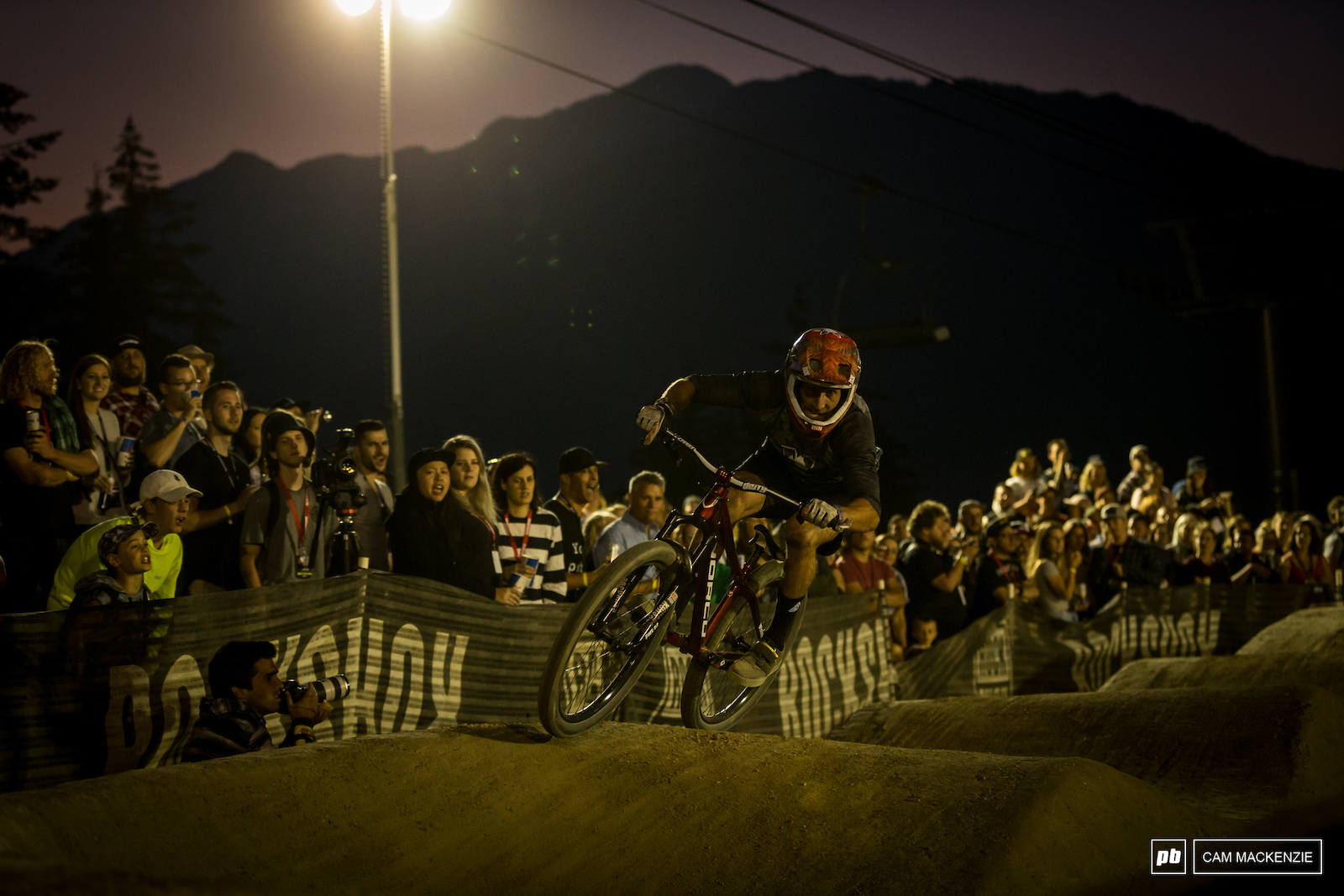 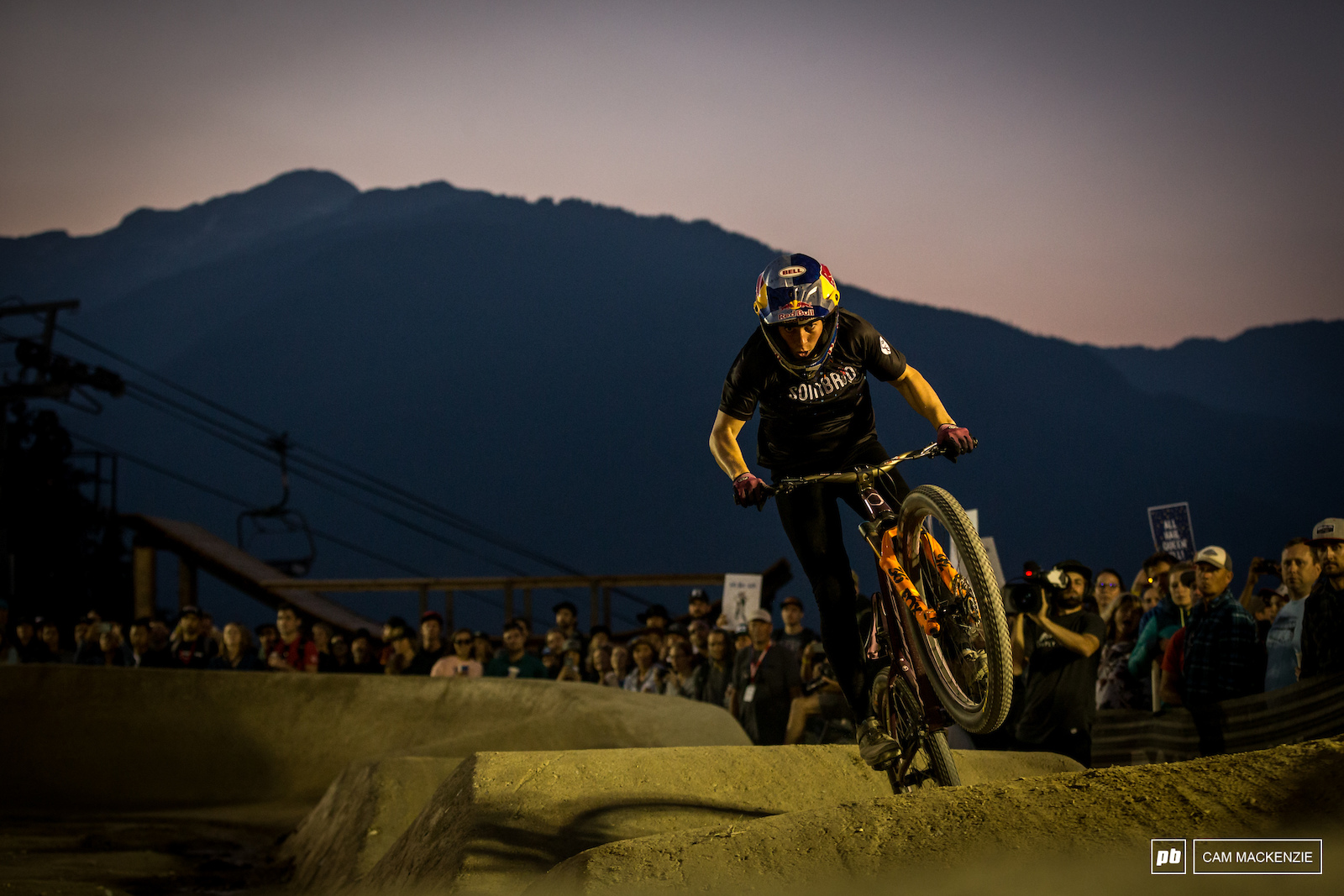 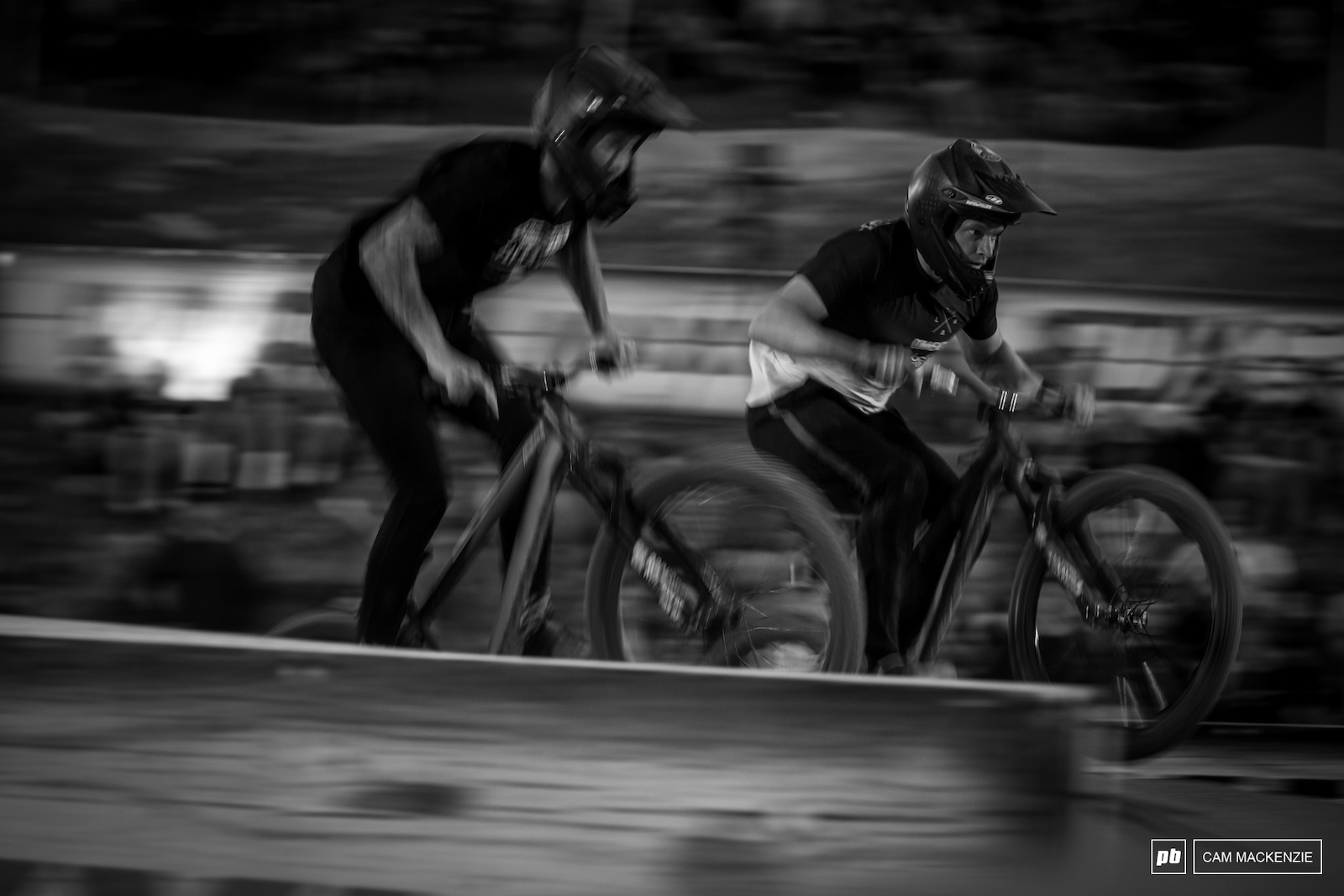 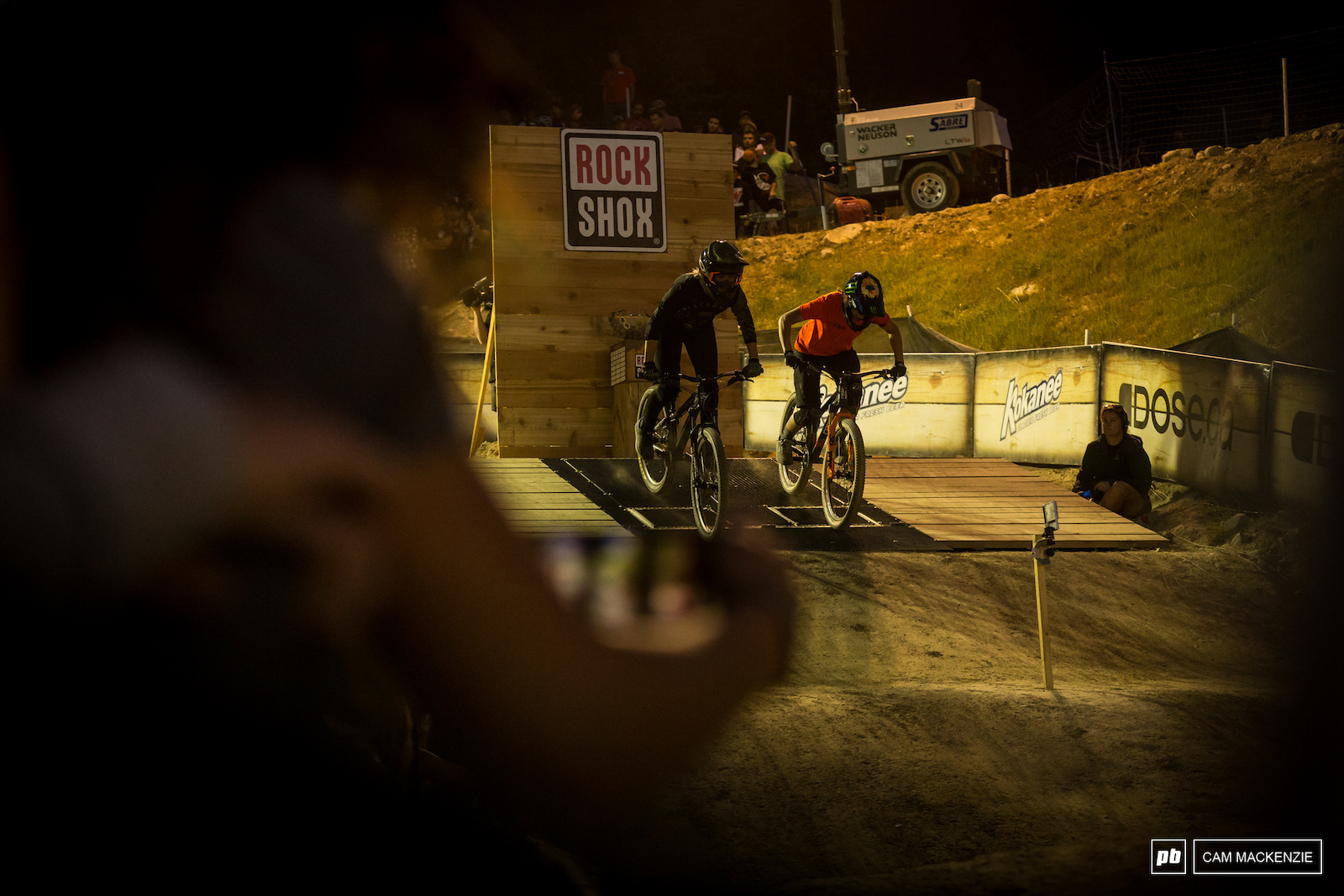 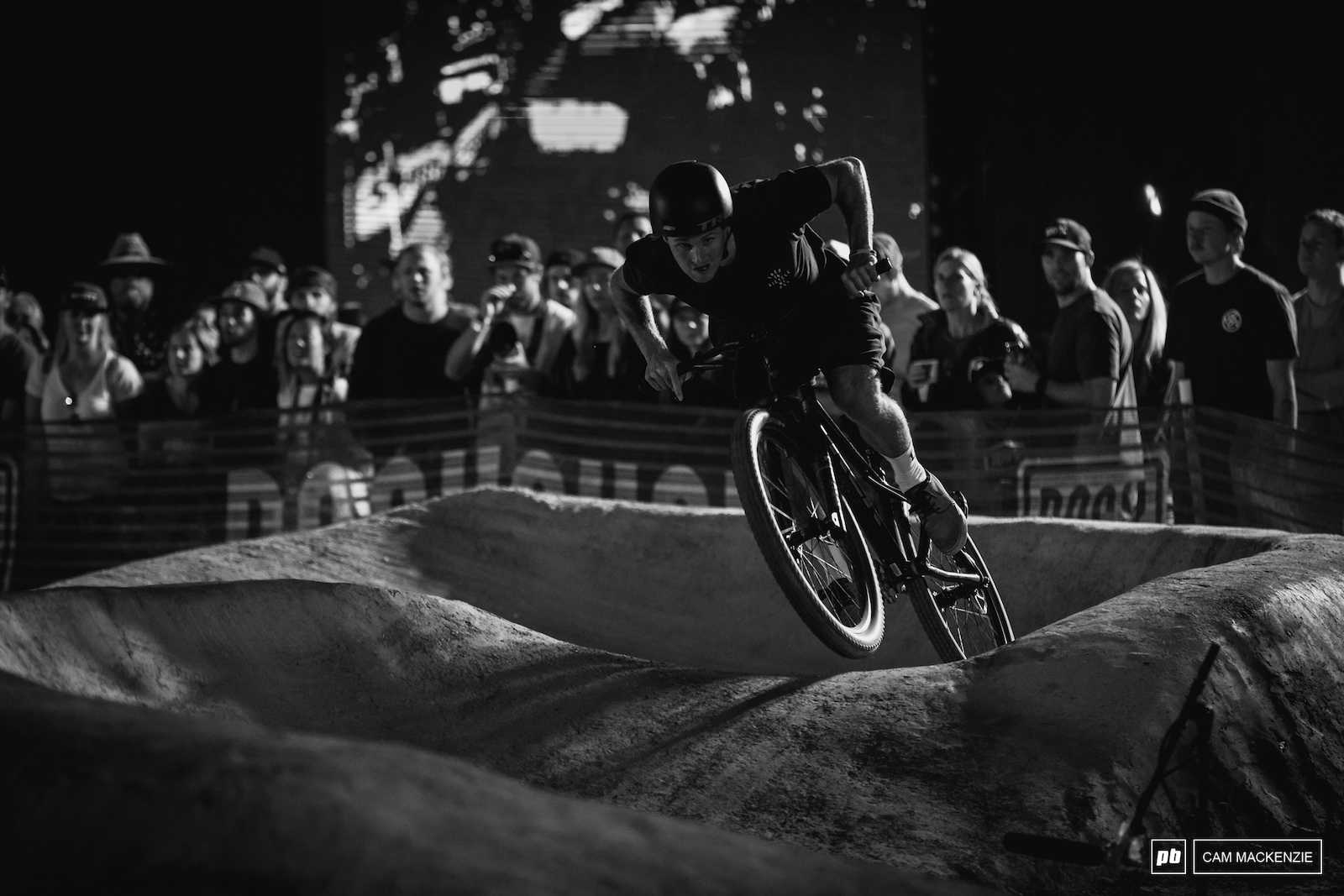 In the Men’s final, it was the newcomer to Crankworx and BMXer Colin Hudson against Chaney Guennet. In the first heat, both were clean through the double-double but Hudson was clearly pushing more and crossed the line in the ahead of Chaney by eight-hundredths of a second. Going into the final heat, both riders were neck and neck in the into the first straight, but Hudson would start to pull away coming out of the first corner, leaving Guennet in his dust. Hudson would be yet another newcomer with a BMX heritage that would create a stir in the pumptrack world, and no doubt we’ll be seeing more of Hudson in competitions to come.

In the Women’s final, it was the same matchup as last year’s final, although this year Caroline Buchanan would be coming back from a heavy injury, having spent most of the season recuperating. Up against the Australian was Crankworx dominator Jill Kintner who was obviously feeling that the overall pumptrack championship wasn’t enough for one night. In the first heat of the final, both managed to start well but Buchanan pulled away into the final straight crossing the line with a hefty 0.29-second advantage. In the final heat Buchanan had a good start and despite her best efforts, Kintner couldn’t gain the advantage.

Buchanan would cross the line first and take the win, making it a back-to-back Whistler win for the Australian. Buchanan would later say in the post-race interview that this win meant a lot to her; her redemption from coming back from what she called her worst year yet was achieved. It wasn’t all gloom for Kintner. She didn’t take home the gold but she did not only secure the overall win but also the Queen of Crankworx 2018 title. Not bad for coming second.

In third place for the Men, it was Lemoine who also gained a little redemption after his unlucky semi-final. Lemoine would race against Keegan Wright for the bronze, and he would take the win against the New Zealander as well as securing valuable points for the title of King of Crankworx. In the Women’s field, it would be Kialani Hines against Jordan Scott for bronze. With Scott 0.26 back going into the second run, Hines would take advantage of the substantial margin and take the lead in the final straight, and with that the bronze. 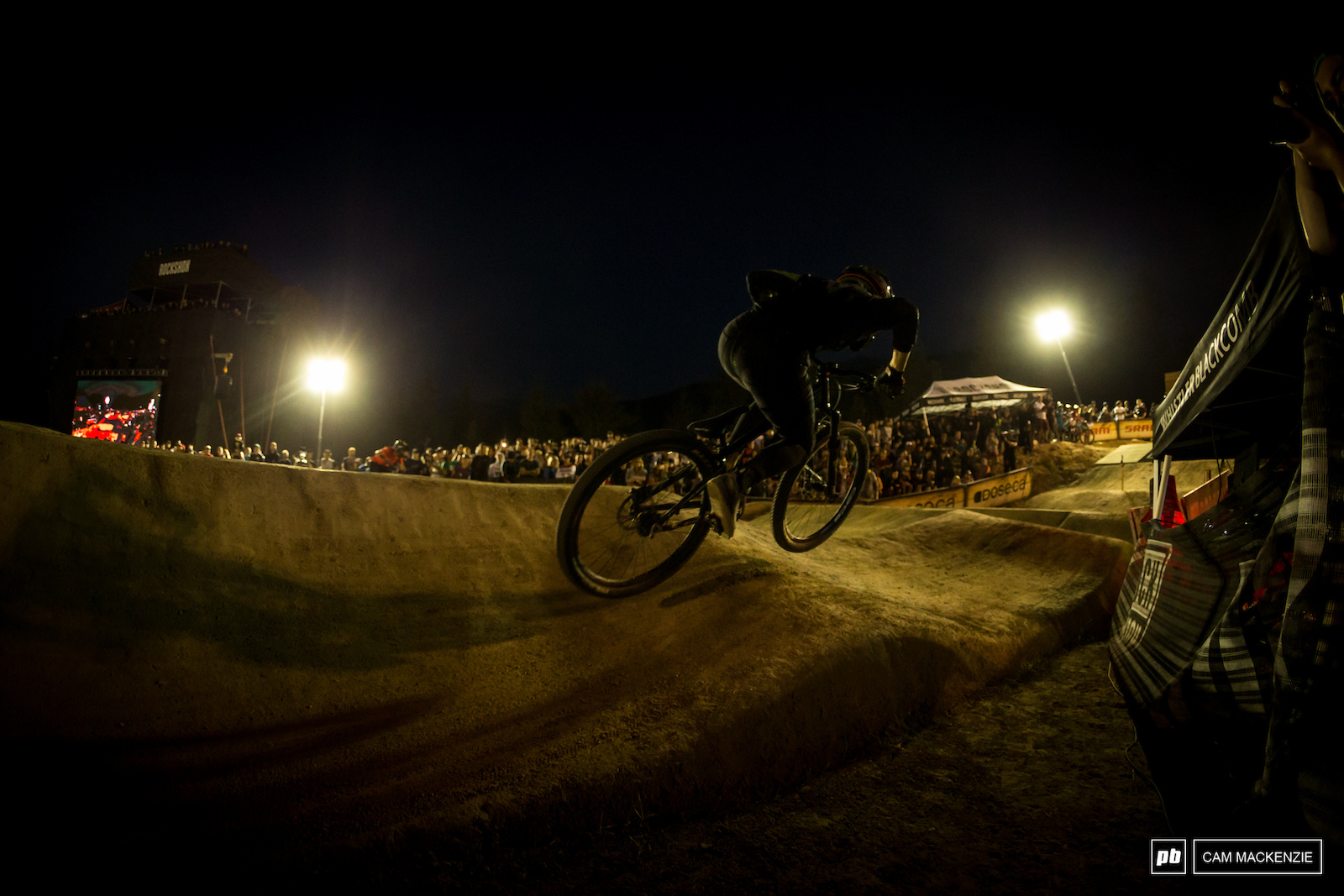 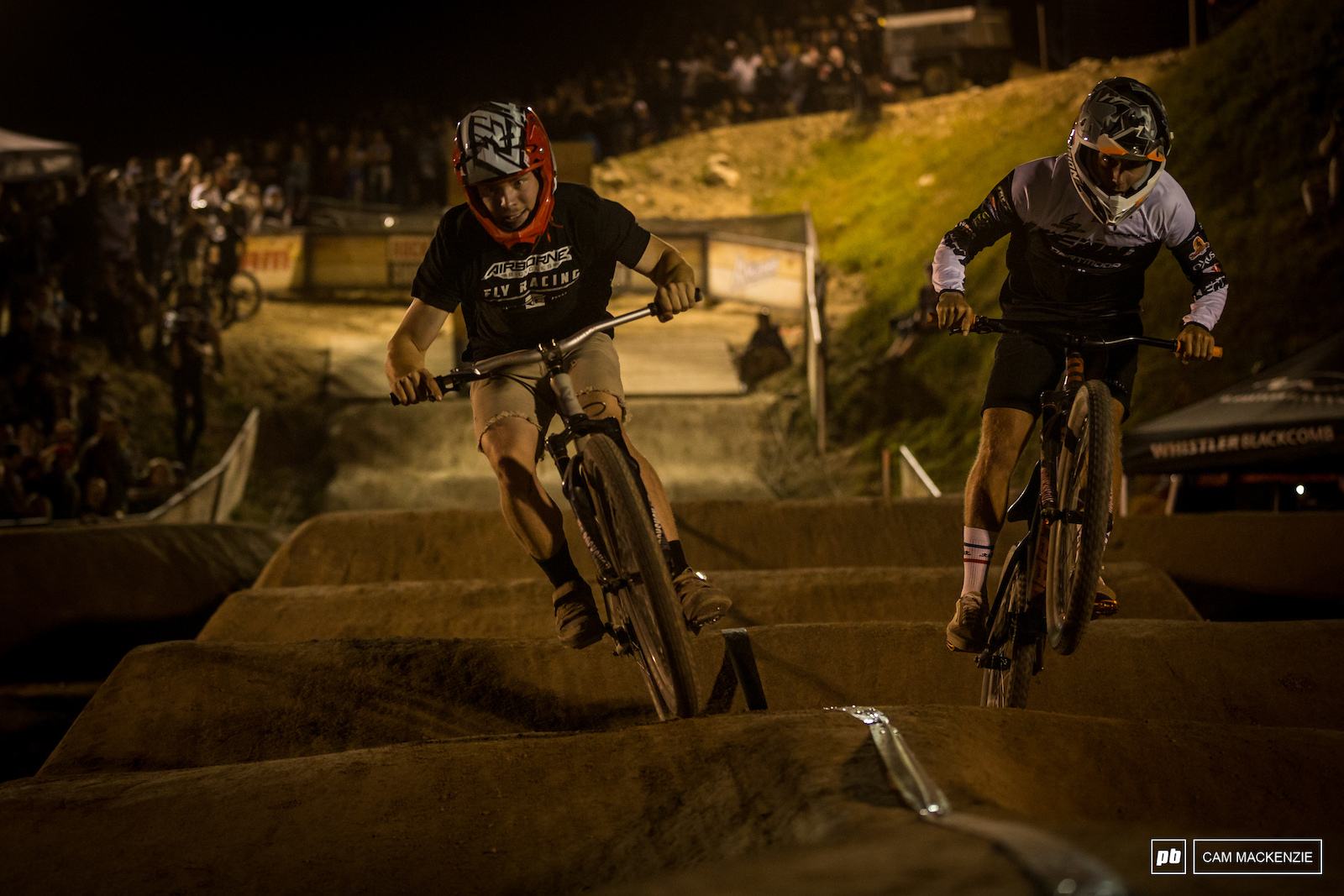 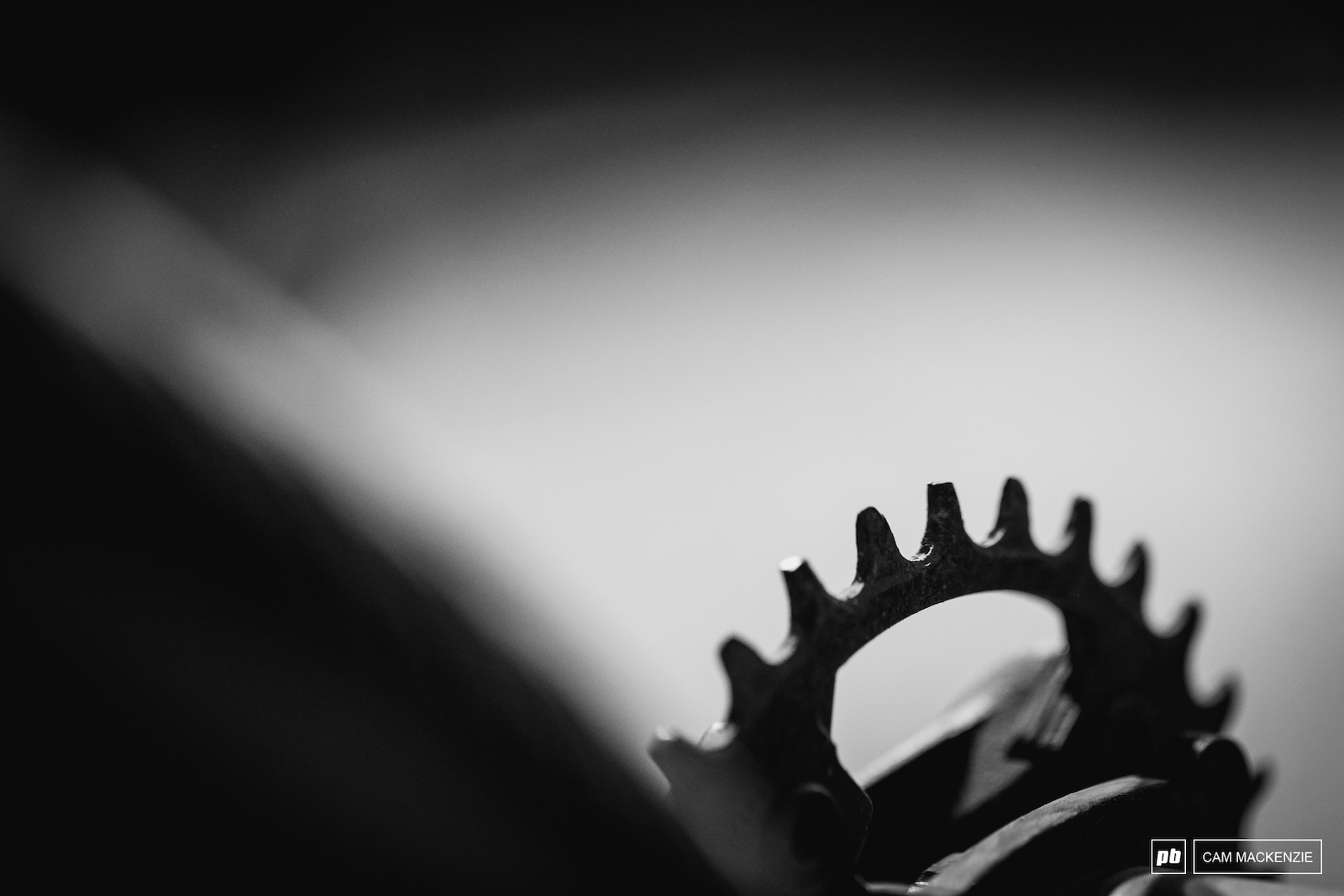 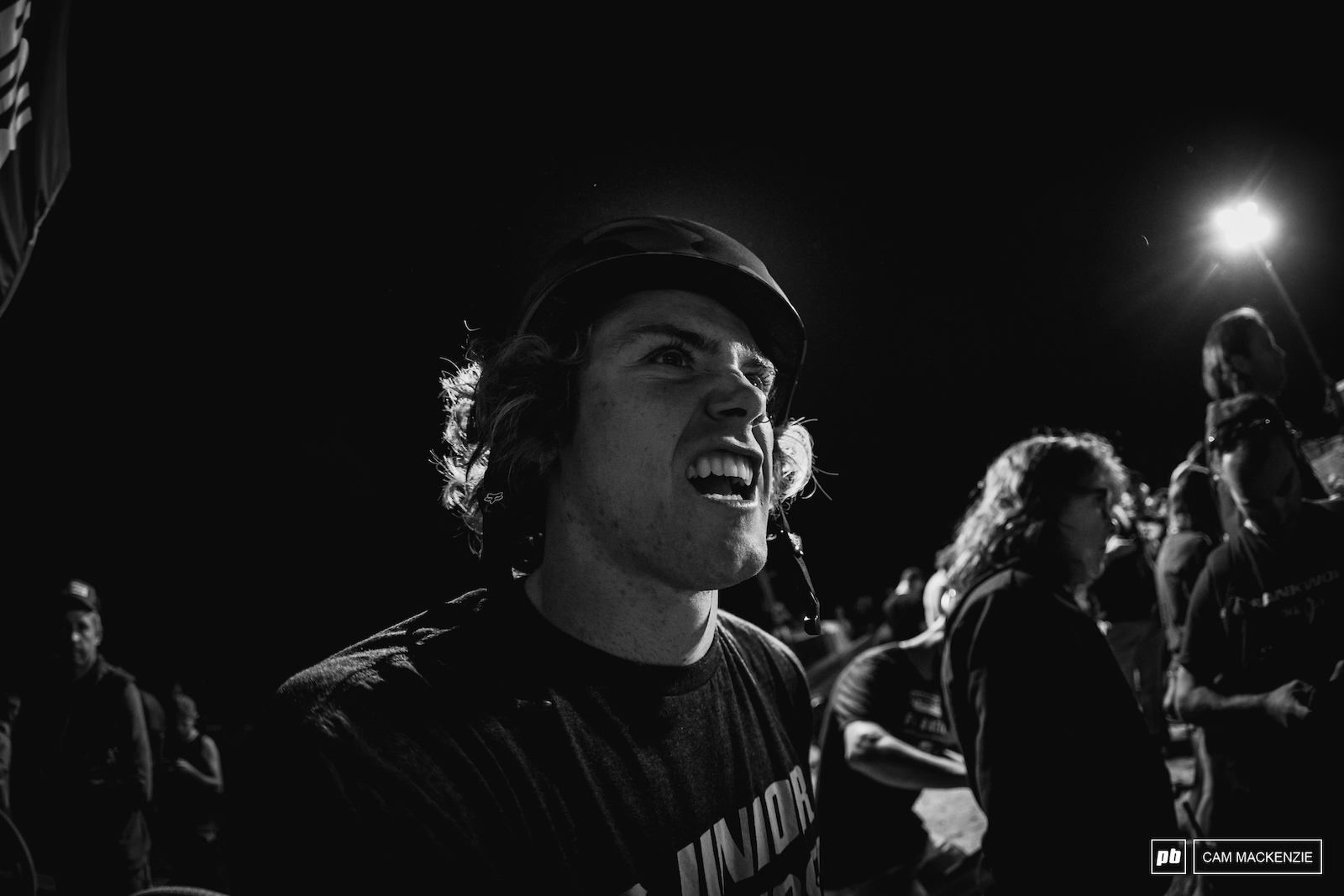 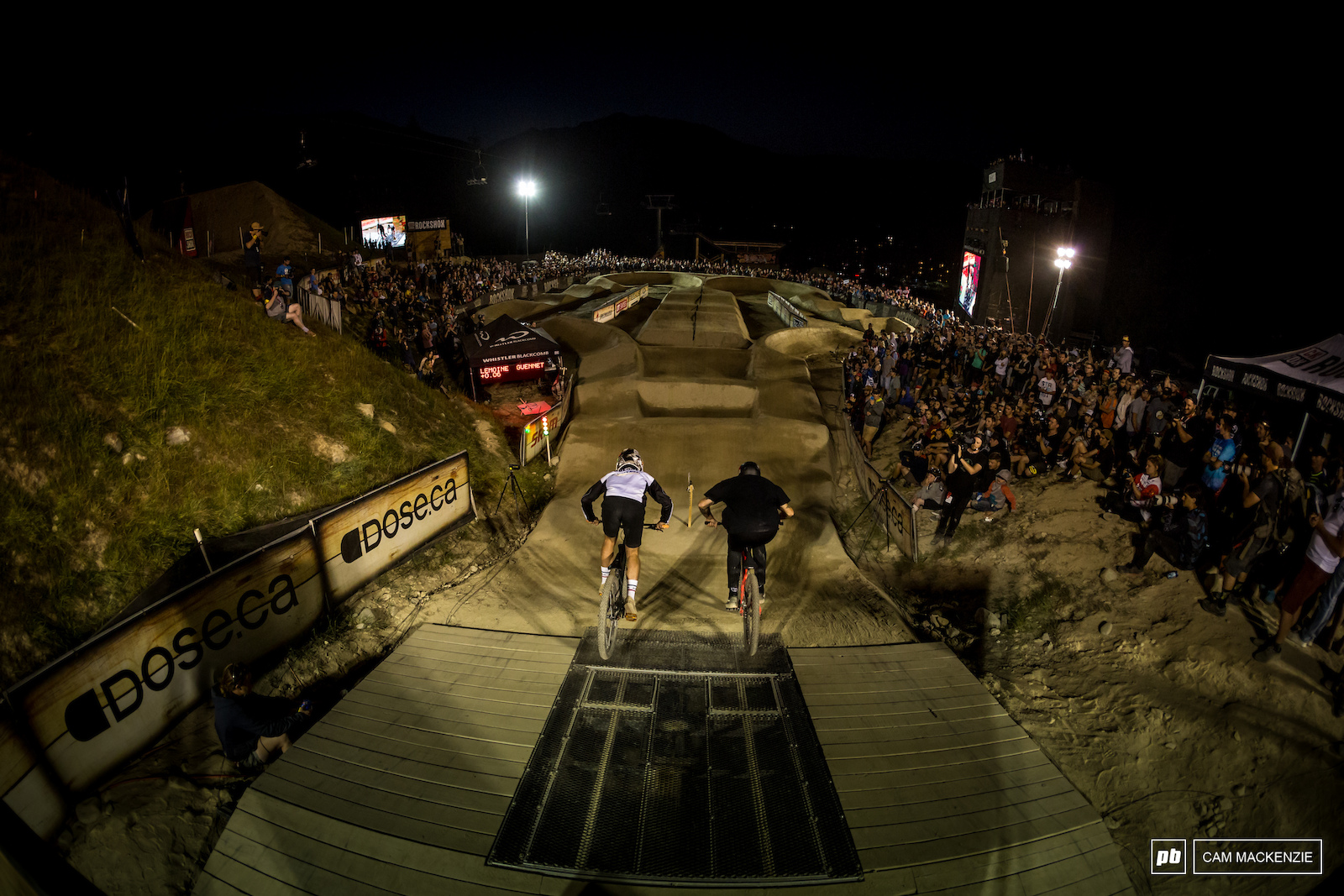 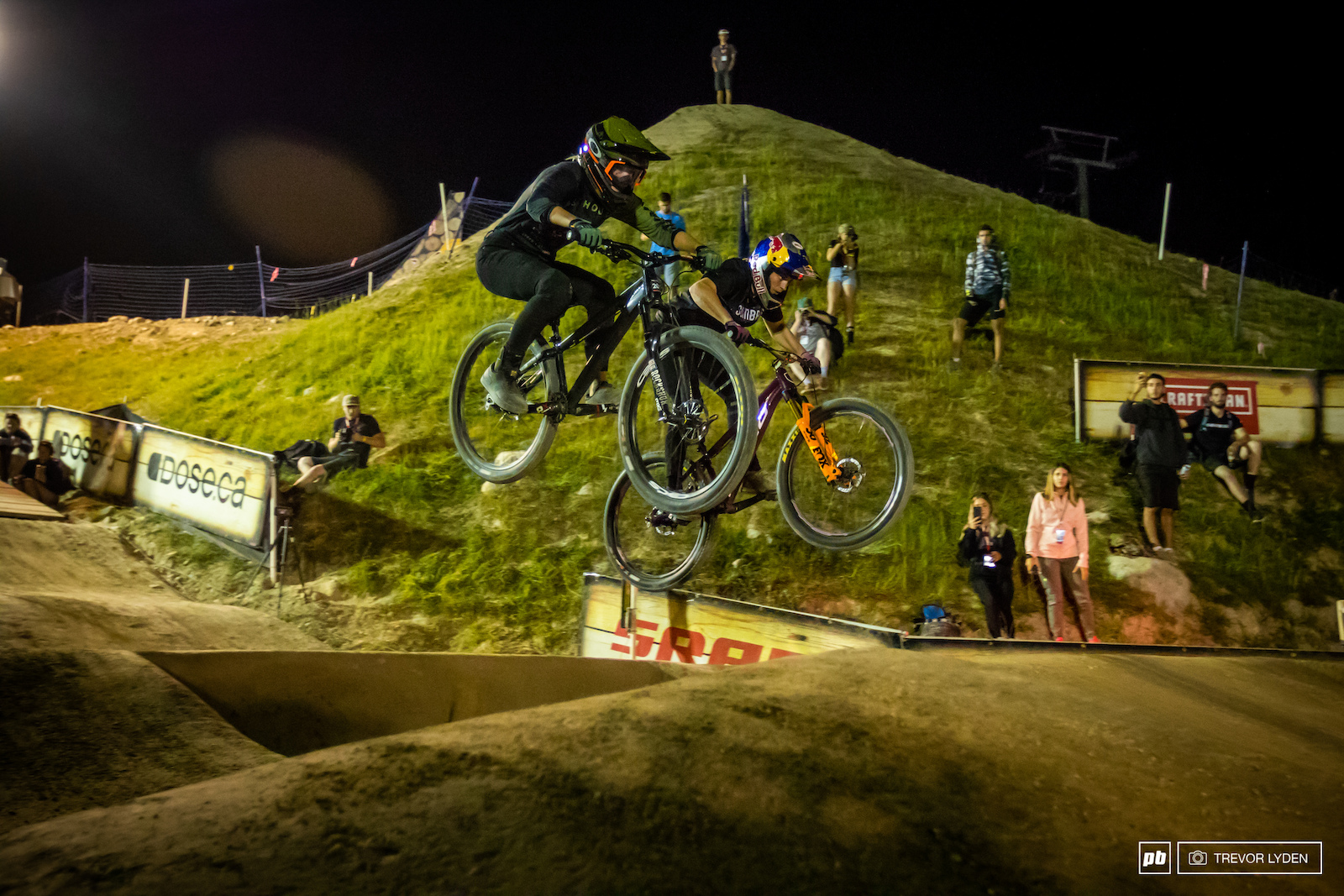 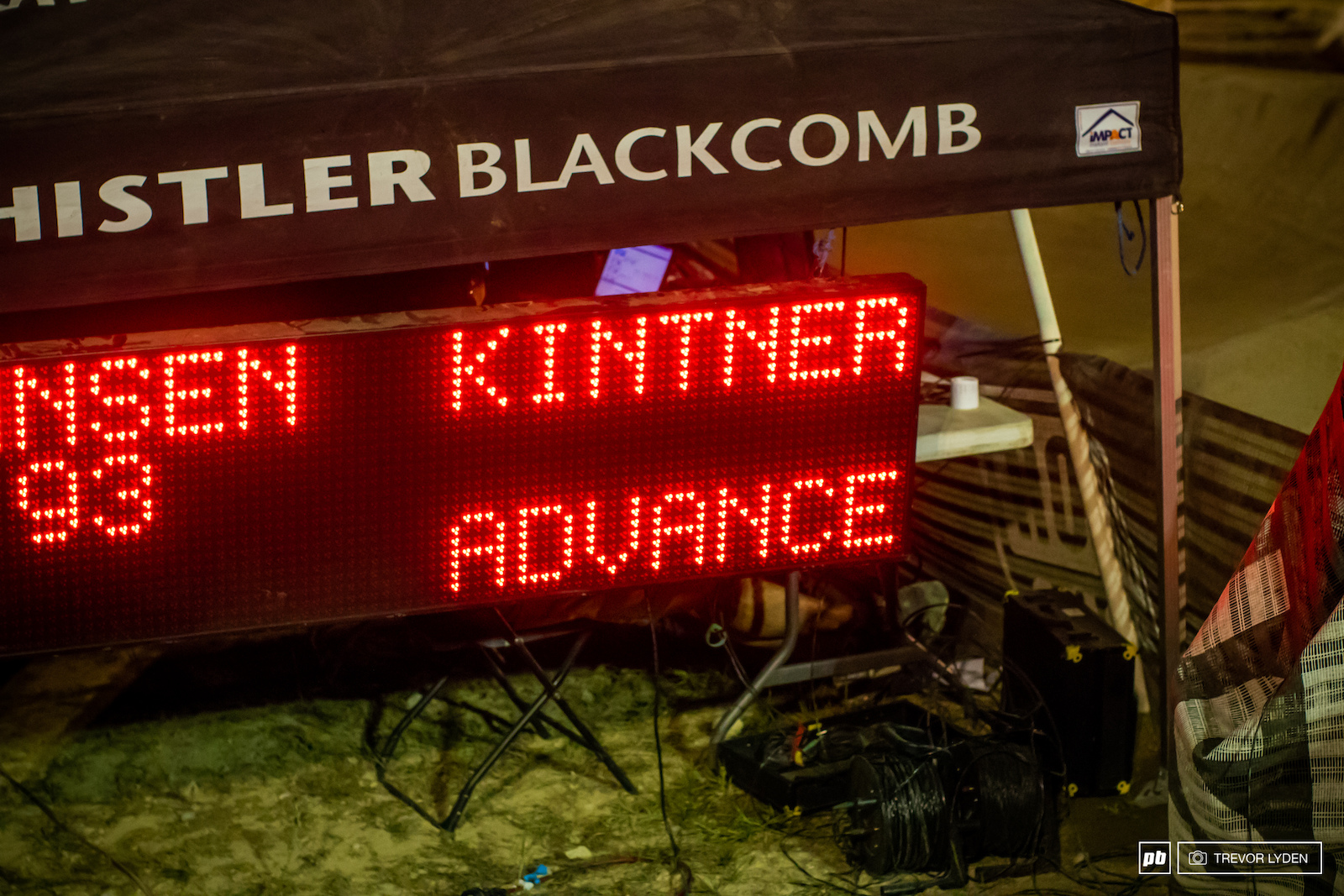 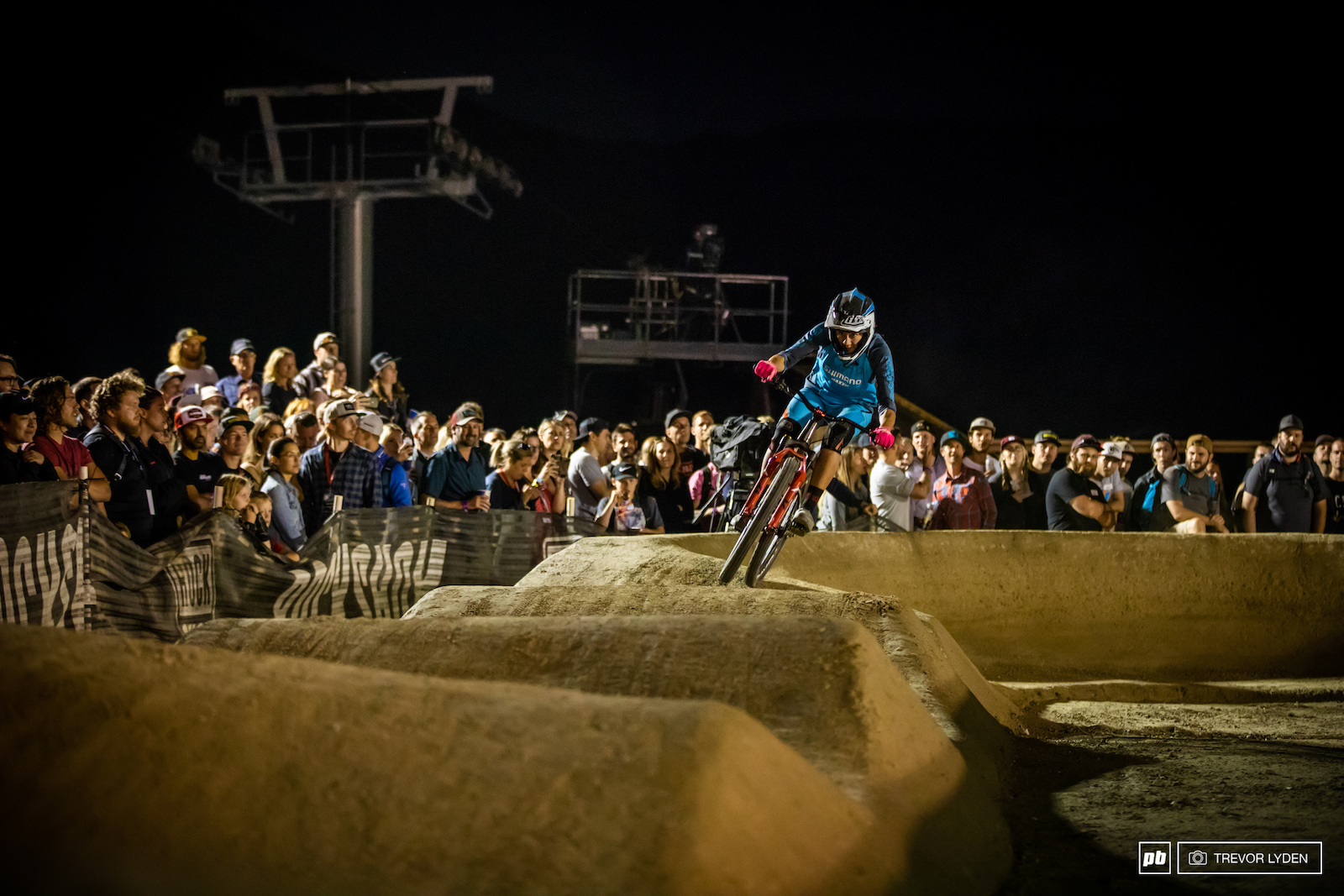 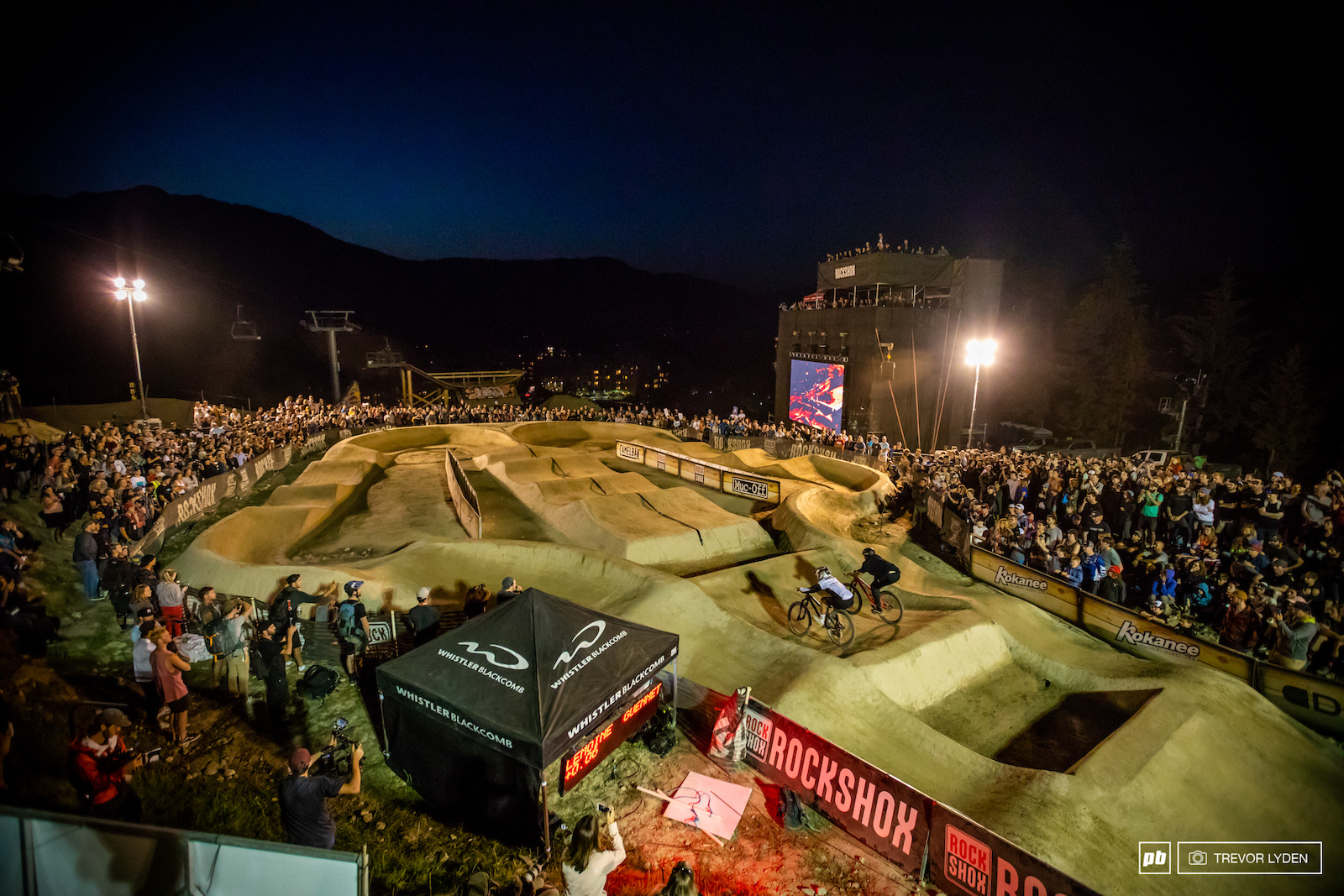 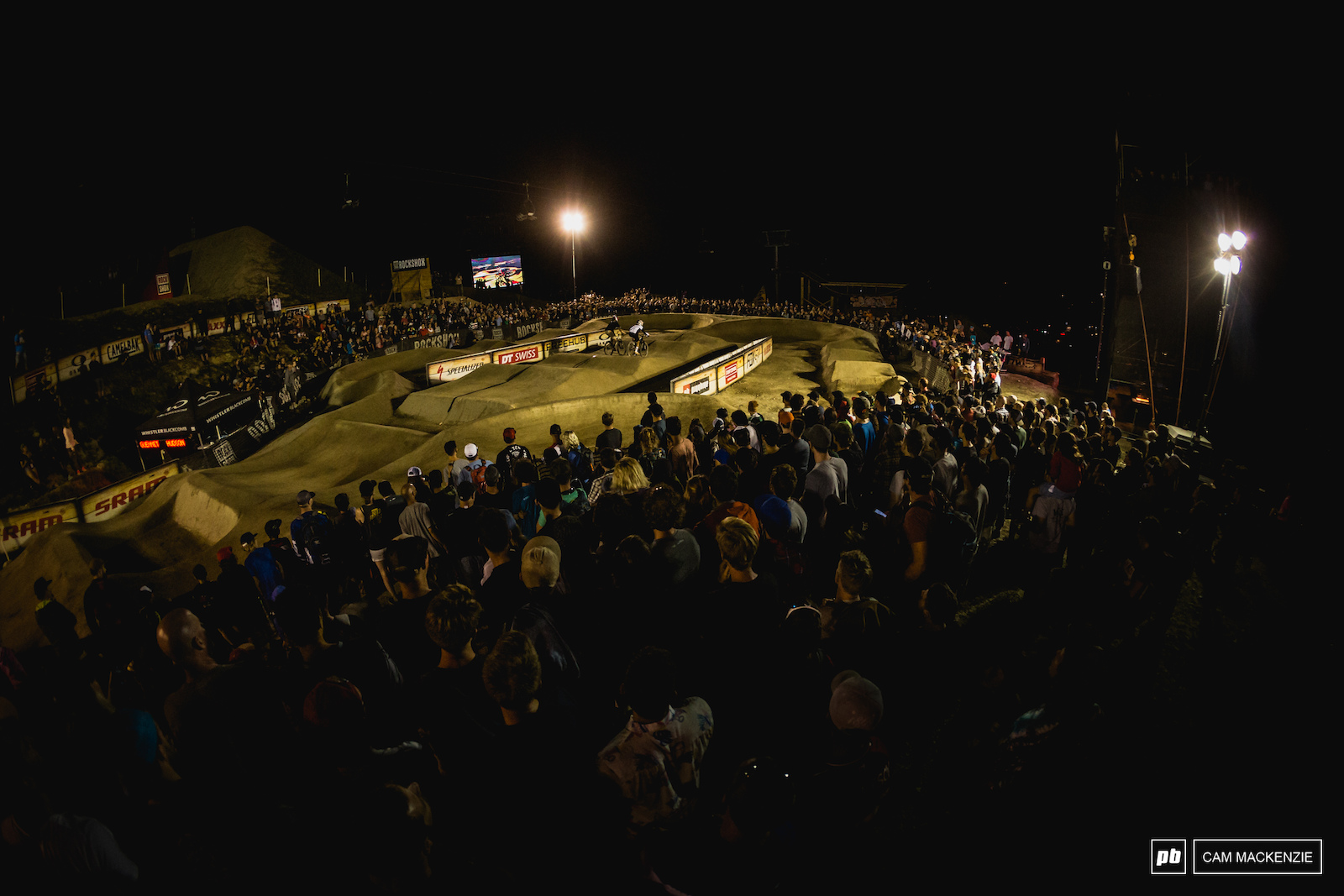 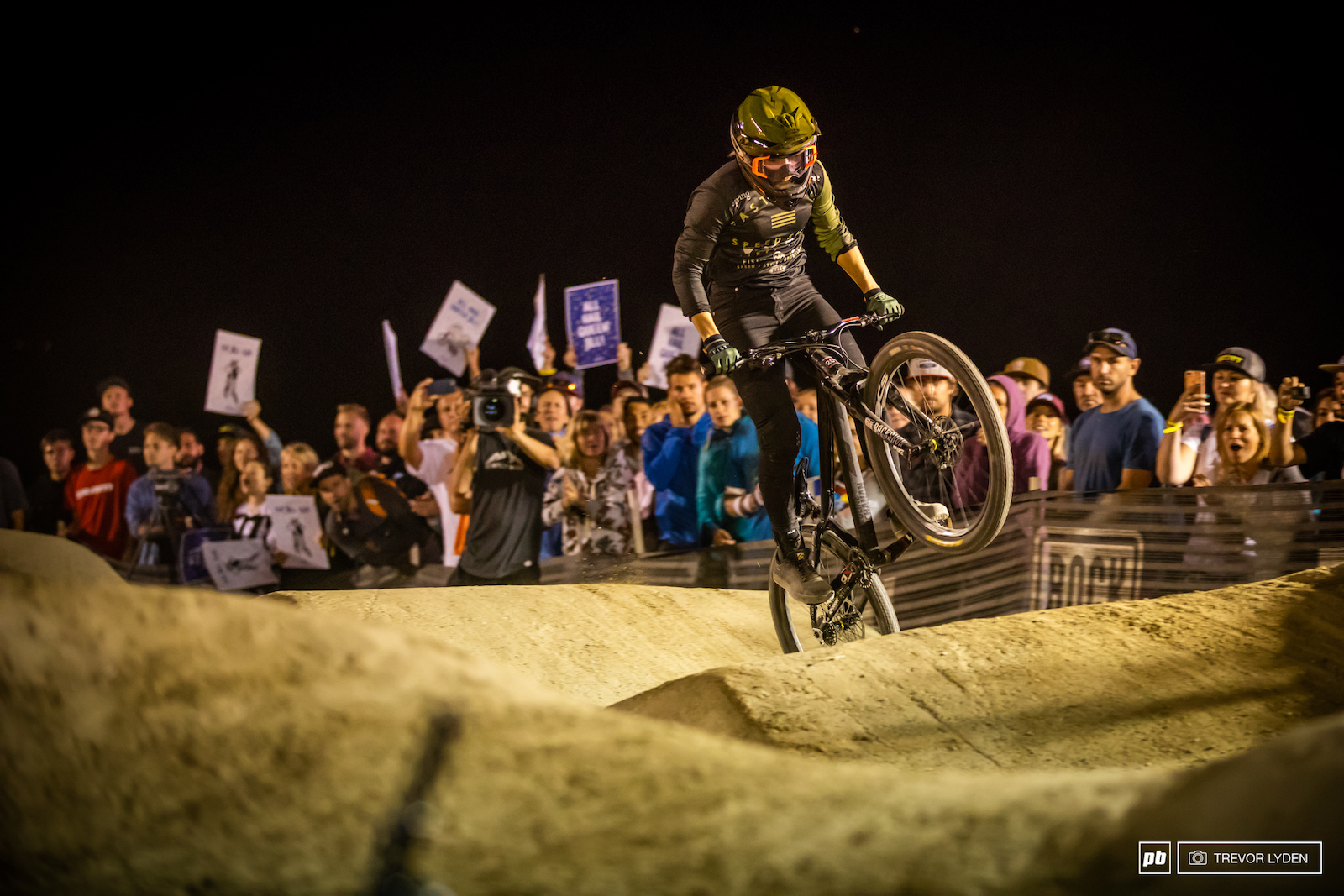 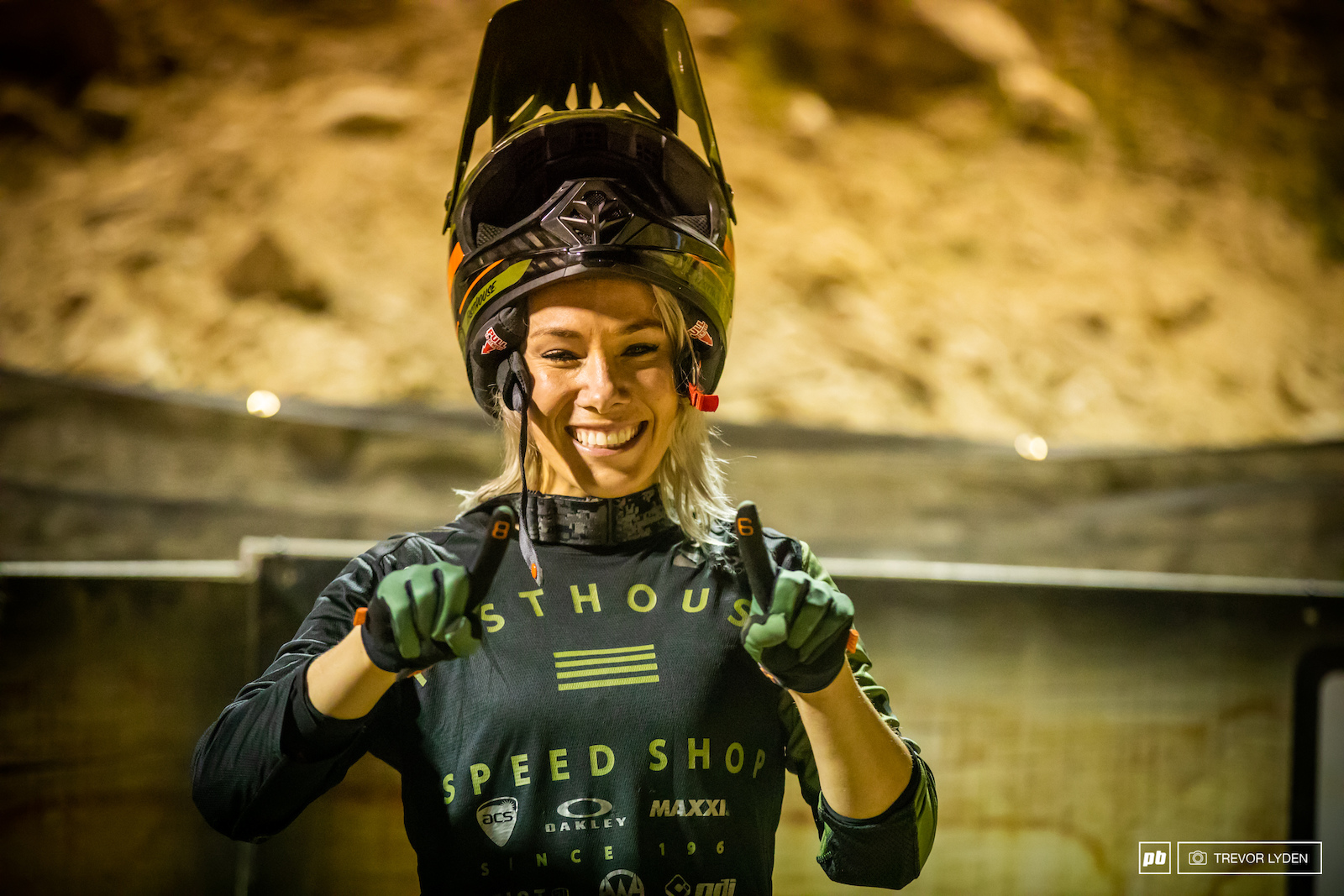 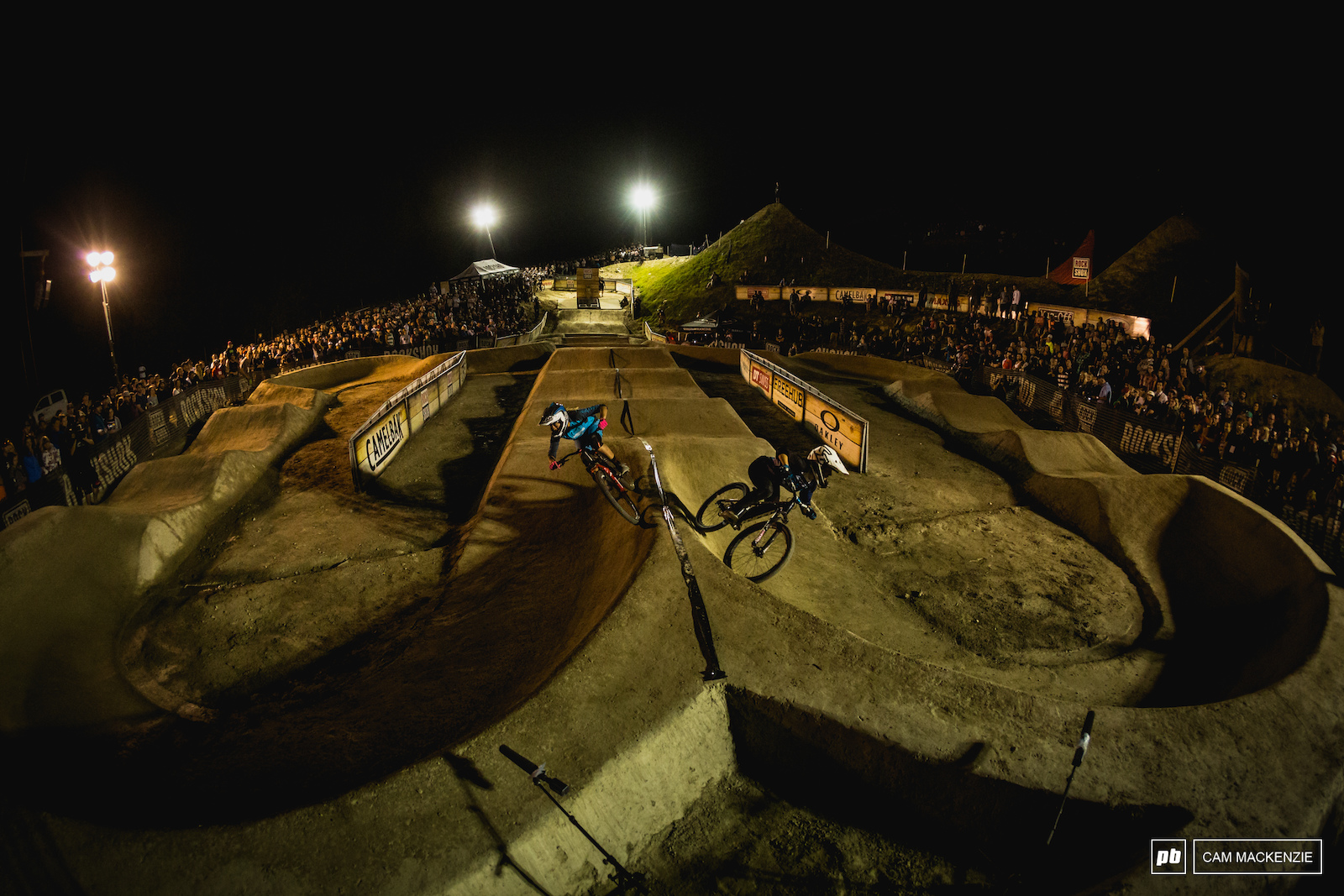 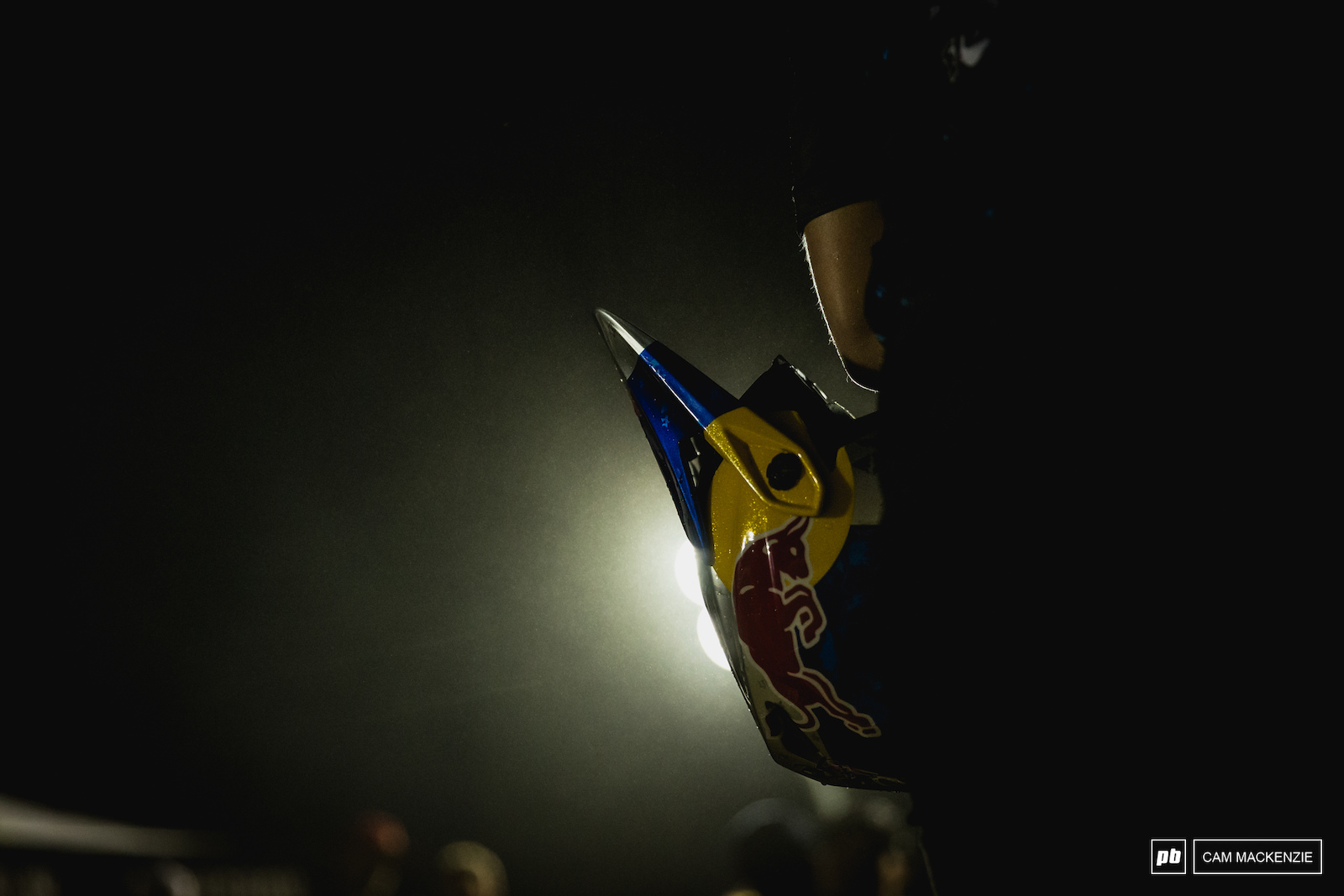 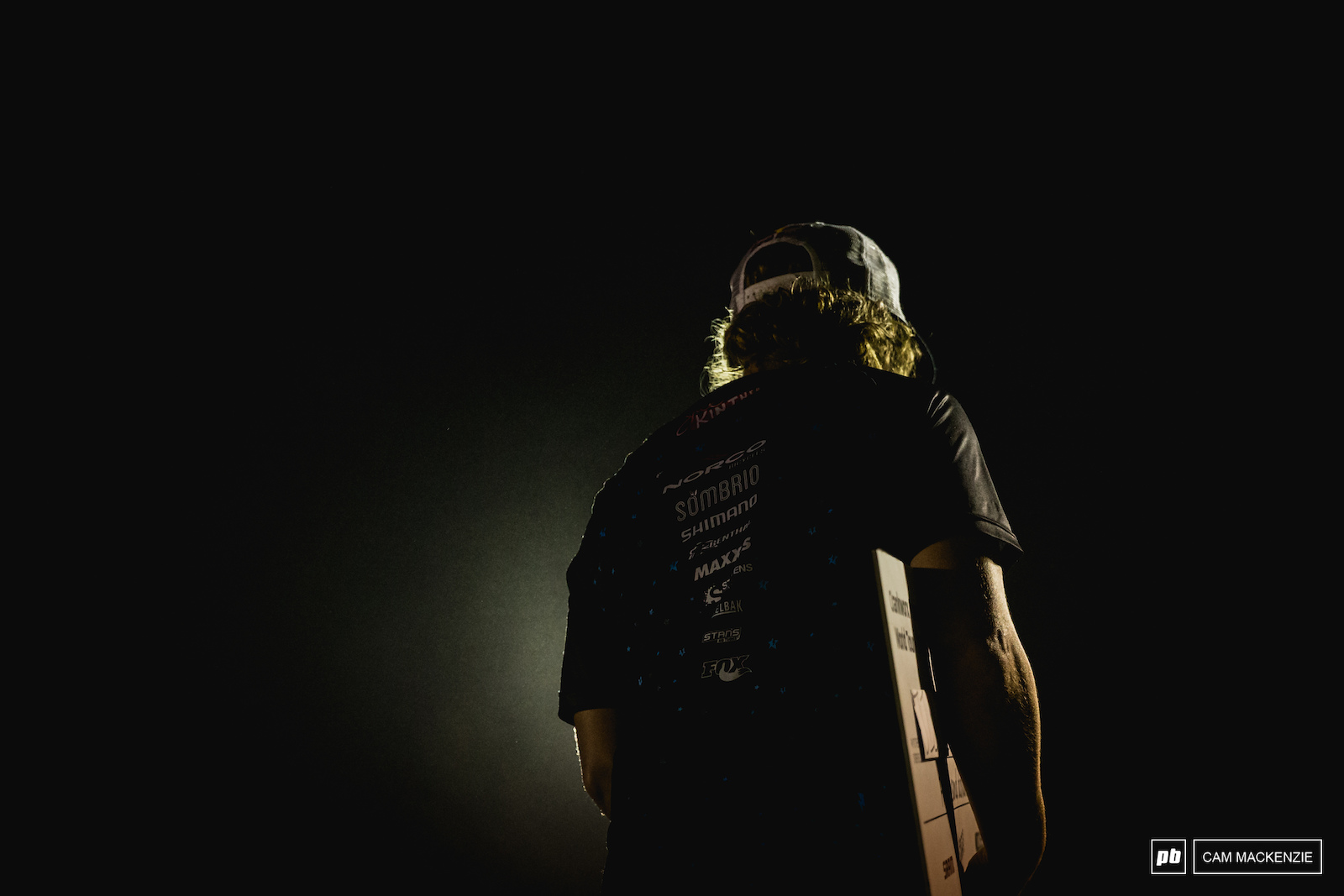 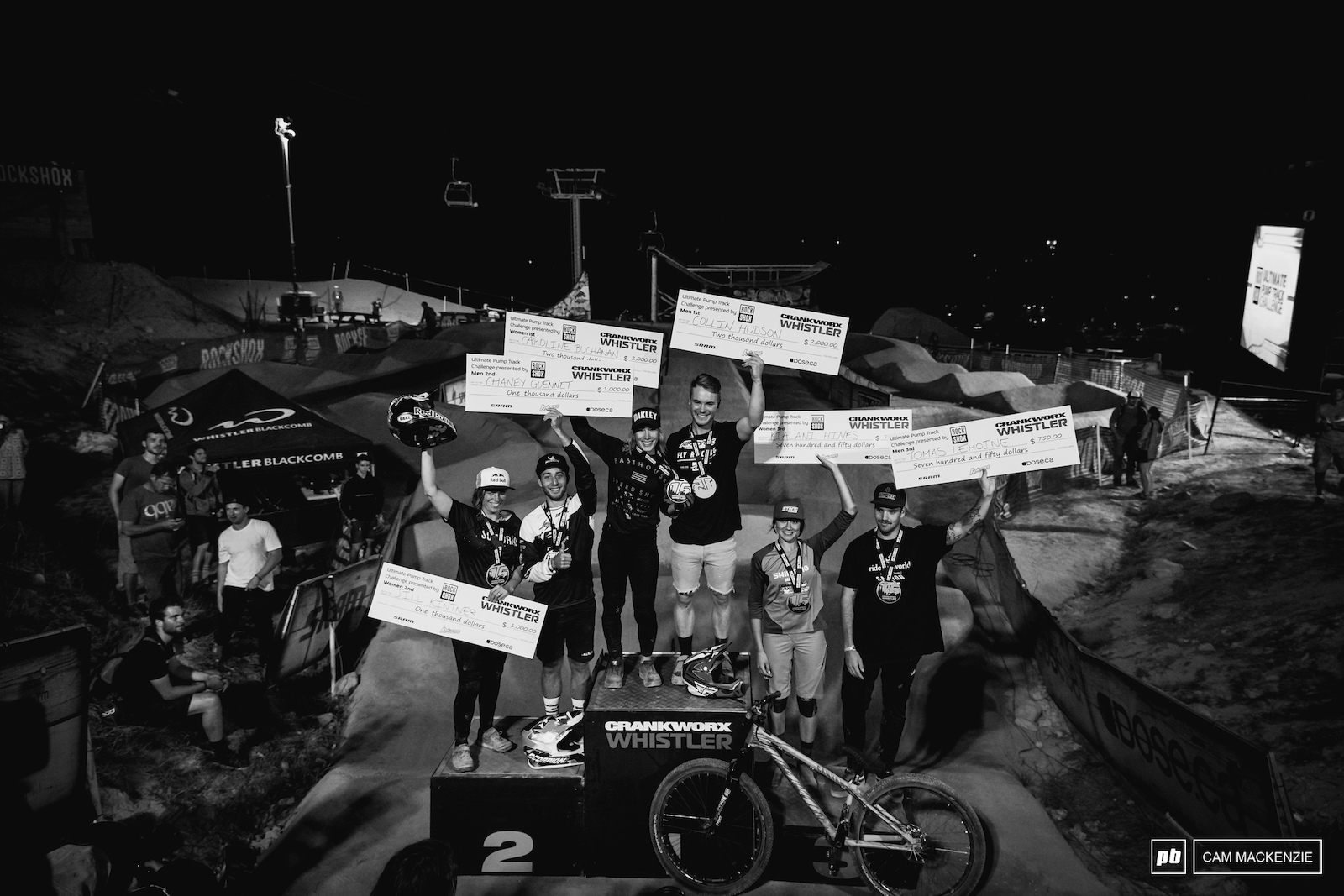 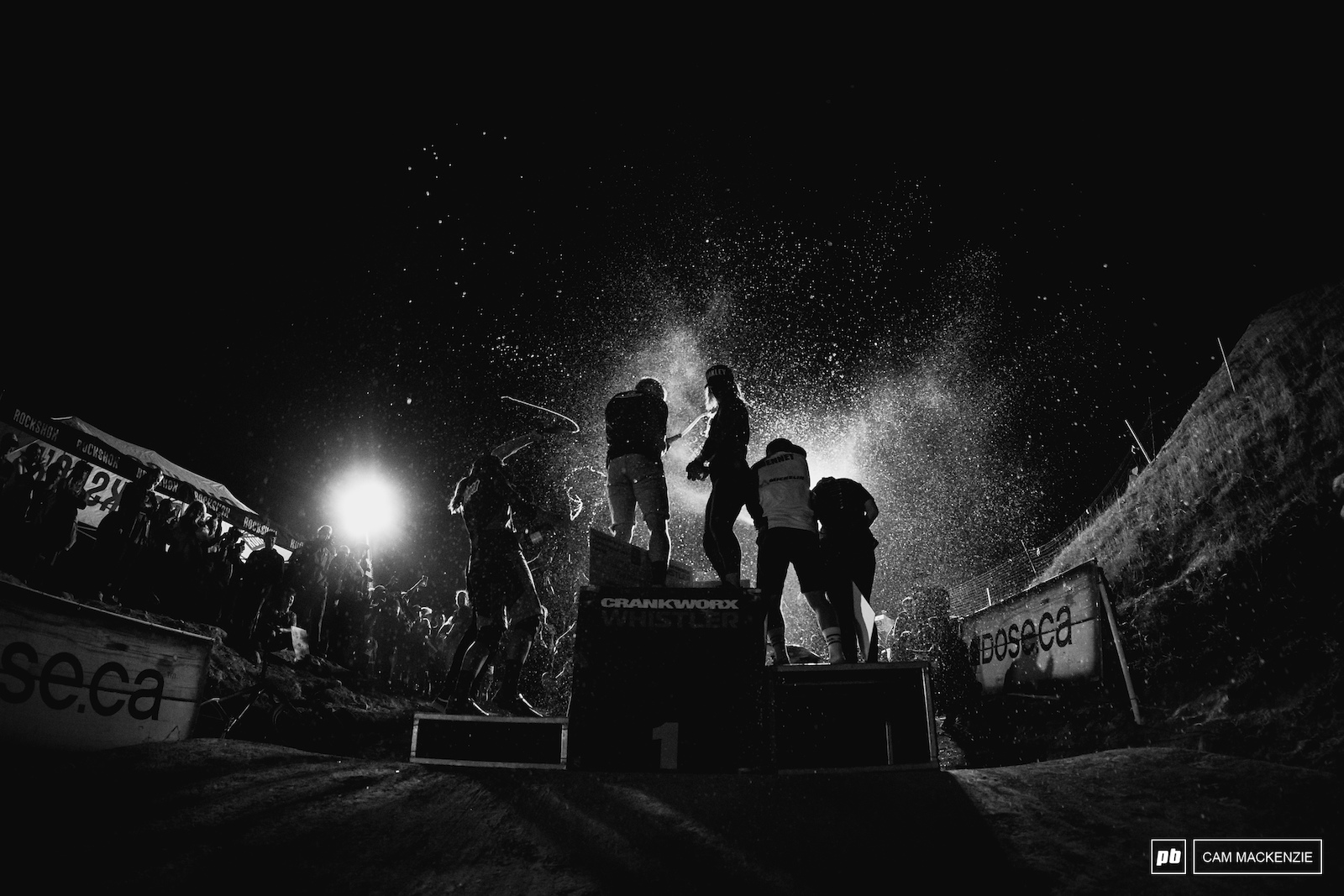 mattbrown9 (Aug 17, 2018 at 7:20)
Anyone else just hope a rider on a Fox fork wins a RockShox sponsored race (or vice versa)? Didn't happen this time, but I'm always slightly entertained when that happens.

WAKIdesigns (Aug 17, 2018 at 12:08)
@bikebike69: I am surprised nobody shows up on a race BMX. You know why? Because I have no fkng clue about riding pumptrack challenge at Crankworx!

blowmyfuse (Aug 17, 2018 at 10:01)
wonder why no one has come up with a set of pegs at the bottom bracket with pedals mounted on it if they're going chainless?

Or maybe a set of 125mm cranks mounted at the same position on the clock to a standard BB?

@cameronmackenzie: wouldn't Caroline (as the winner) deserve to be featured on the thumbnail of the post (instead of Jill)? I guess Jill sells more as a brand?

BryceBorlick (Aug 17, 2018 at 9:37)
Track is so perfectly sculpted! Ive always wanted to put one in the yard but always known id be over it after a few sessions

Zaeius (Aug 17, 2018 at 17:29)
Jill did not race against Kialani in the semi-final.
Below threshold threads are hidden