Join Pinkbike  Login
The winners of the Red Bull Illume action and adventure sports imagery contest were announced November 20th in South Tyrol, Italy. The contest crowned an Overall Winner and 11 Category Winners, many of which were won by mountain bike-related media.

The Image Quest 2019 was the fifth edition and included two new categories; Best of Instagram by SanDisk and the Moving Image category which Rupert Walker won for the opening shot in Parallel. The voting panel consisted of 50 photo editors and digital experts and a record-breaking 59,551 images were submitted by thousands of photographers with entries from all around the world.

Images that demonstrate the force that powers an action and show the energy, speed and strength required for an athlete to perform. 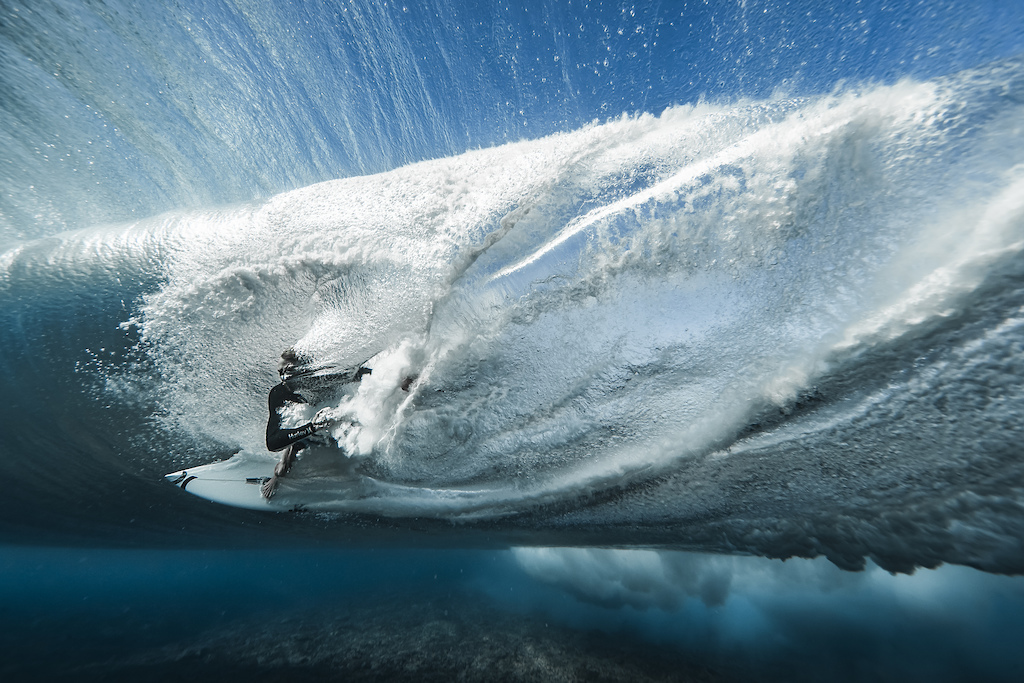 Ben Thouard, France, shows the power of surfing with this underwater shot of Ace Buchan kicking out from the barrel through the wave in Teahupo’o, Tahiti, French Polynesia.

Images submitted on Instagram – photographer’s most gram-worthy moments of show-stopping adventure and action sports. Stuff so cool you have to stop scrolling. 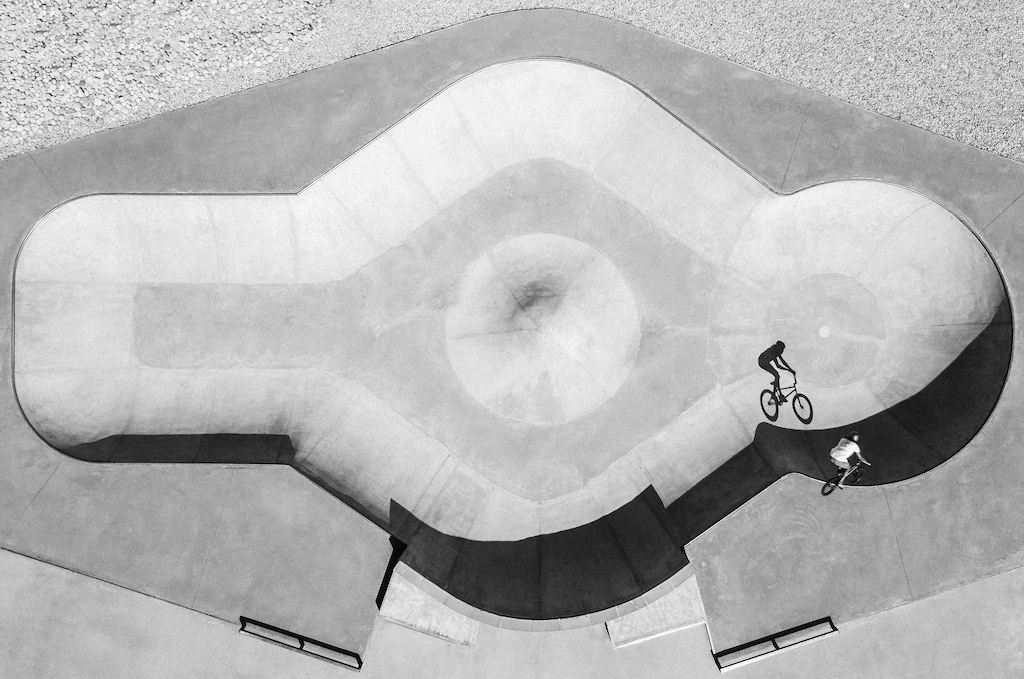 Baptiste Fauchille, France, with a shot from a buddies trip with a business goal showing Alex Bibollet’s shadow in the bowl of Fillinges, France.

Images that have been enhanced digitally or in the darkroom through alterations made in the production or digital editing process. This is an open category so anything goes! 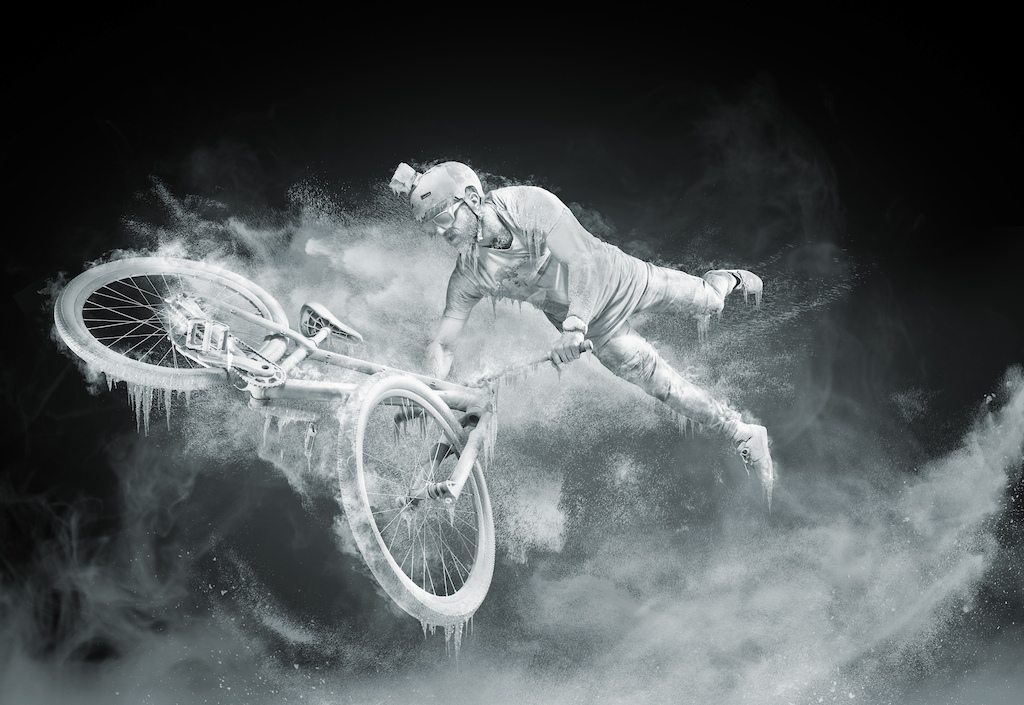 Denis Klero, Russia, for his visually striking image of Paul Alekhin to celebrate the change of season in Streetfire Club, Moscow, Russia.

A fresh approach offers new angles. The up-and-coming category is for rising talents to compete on similar footing – submissions accepted only from photographers 25 years old or less. No video, no image manipulation. Show us your greatest capture! 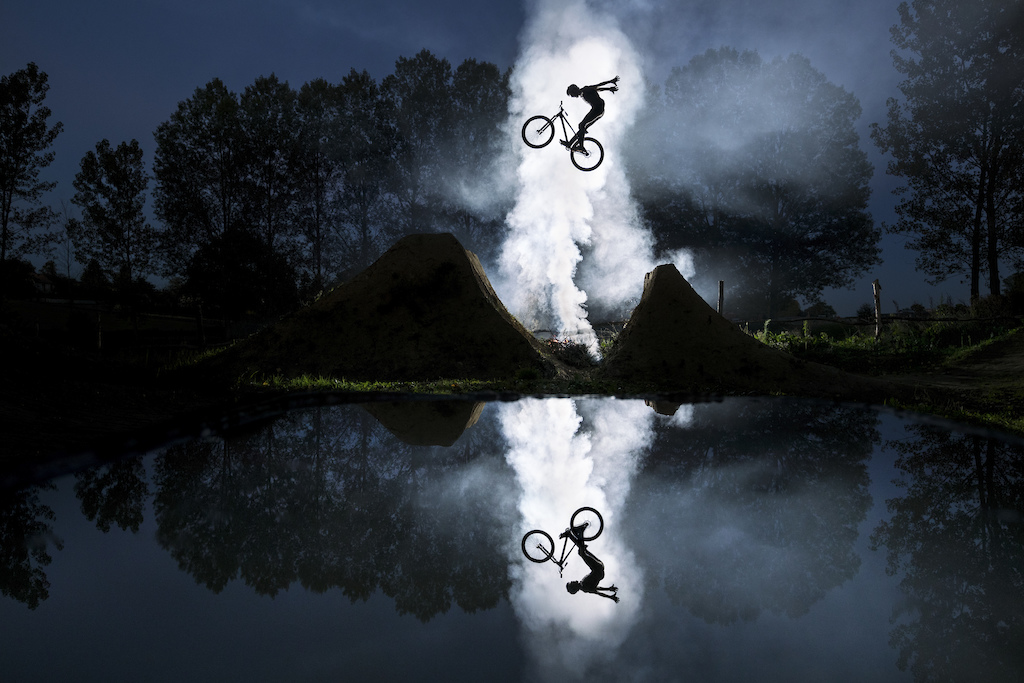 Jean-Baptiste Liautard, France, joins the big leagues with this mirrored shot of Jeremy Berthier at his trail in Bourgoin-Jallieu, France.

Images that reveal a unique angle, a visual idea, a different format, light and flash effects... something never seen before! It's the purely creative image. 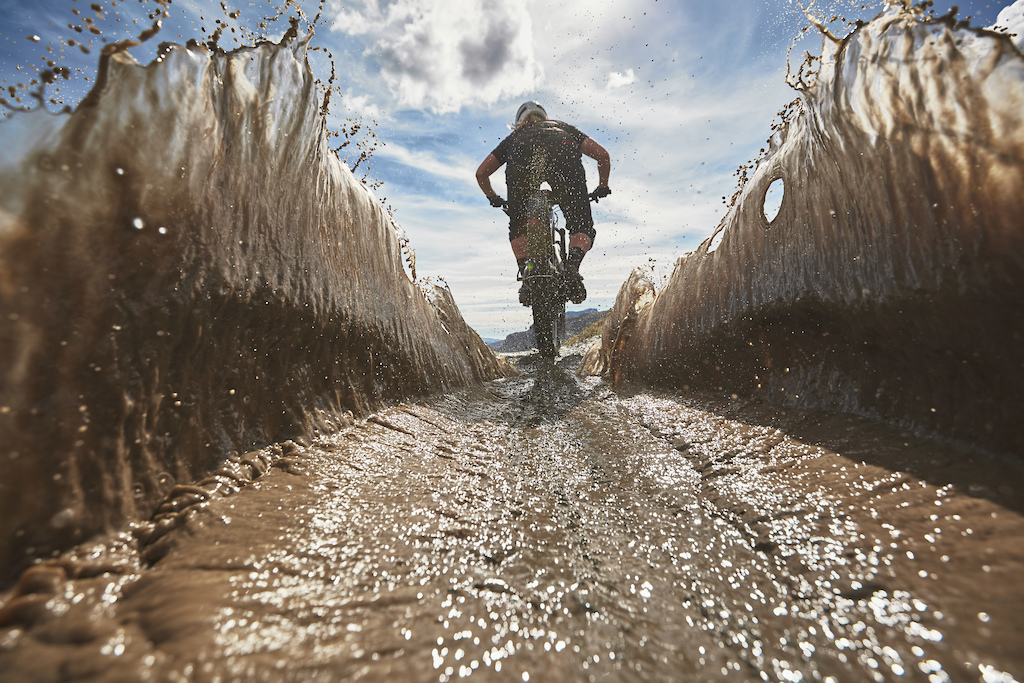 Laurence Crossman-Emms, United Kingdom, takes the imagination by storm with this image of Katy Winton riding through a puddle at Blaenau Ffestiniog, North Wales, United Kingdom.

Images that visually capture the creativity of the lifestyle, music and culture that surrounds action and freesports, or represents what happens before, between, and after the action. 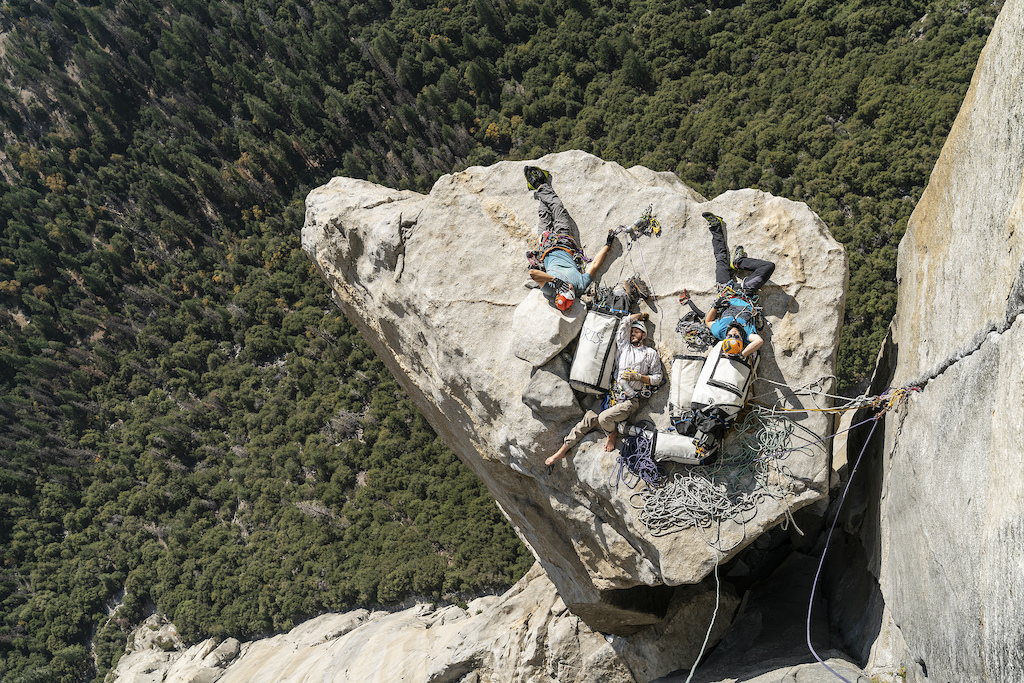 
Mastepiece by EyeEm:
Images that illuminate your artistic skill, your personal best, your unique style - give us your best shot! 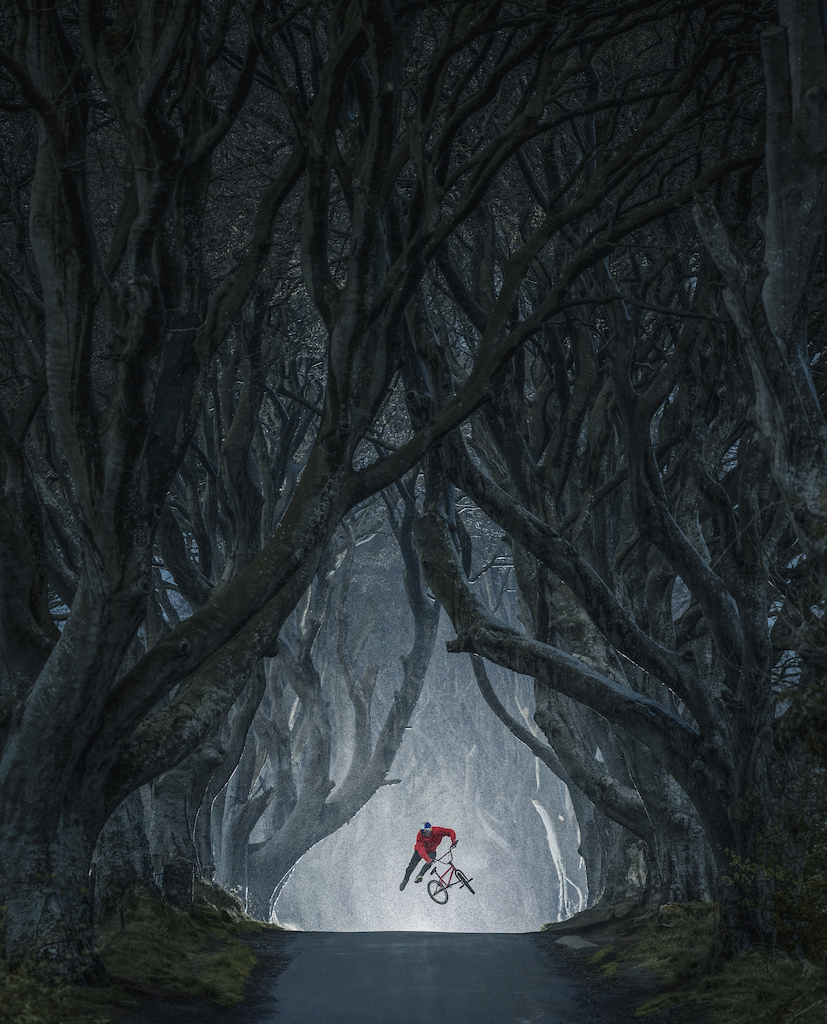 Lorenz Holder, Germany, for his shot of Senad Grosic flying in the magical Game of Thrones location, The Dark Hedges, Northern Ireland.

Images are no longer standing still. The Moving Image category is an open playing field for video sequences between 5 and 30 seconds. Ready… set… action!

Images that showcase the landscapes, locations, platforms and environments in which athletes play. 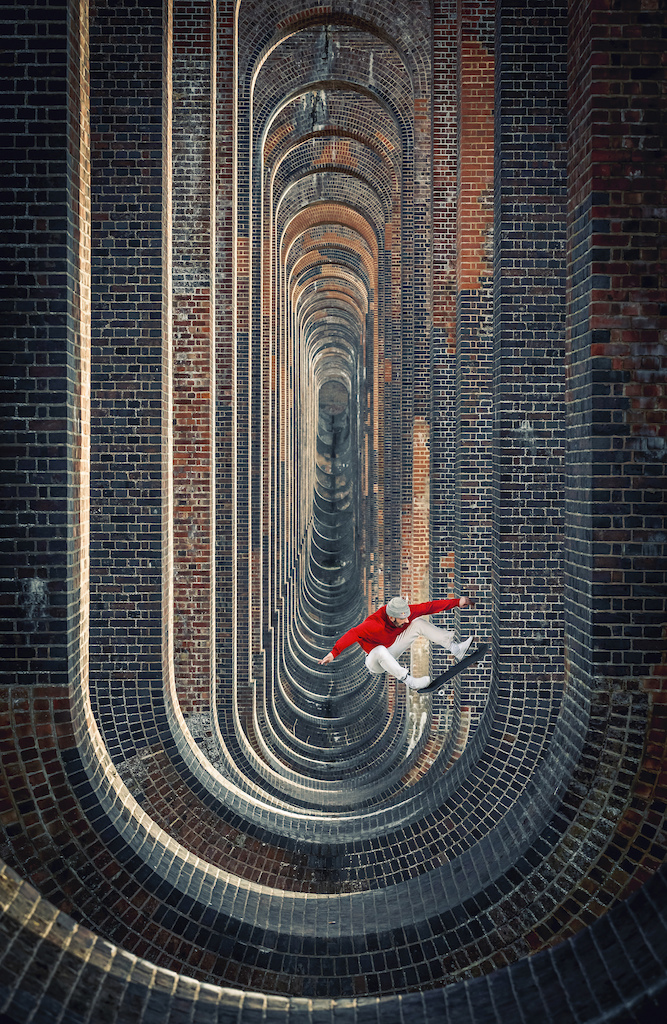 Shots that are straight out of the camera showcasing the real image. Composition, exposure, lighting done in front of the lens and in the scene, not behind a screen. That’s the RAW category: un-cropped, un-touched, no filter. 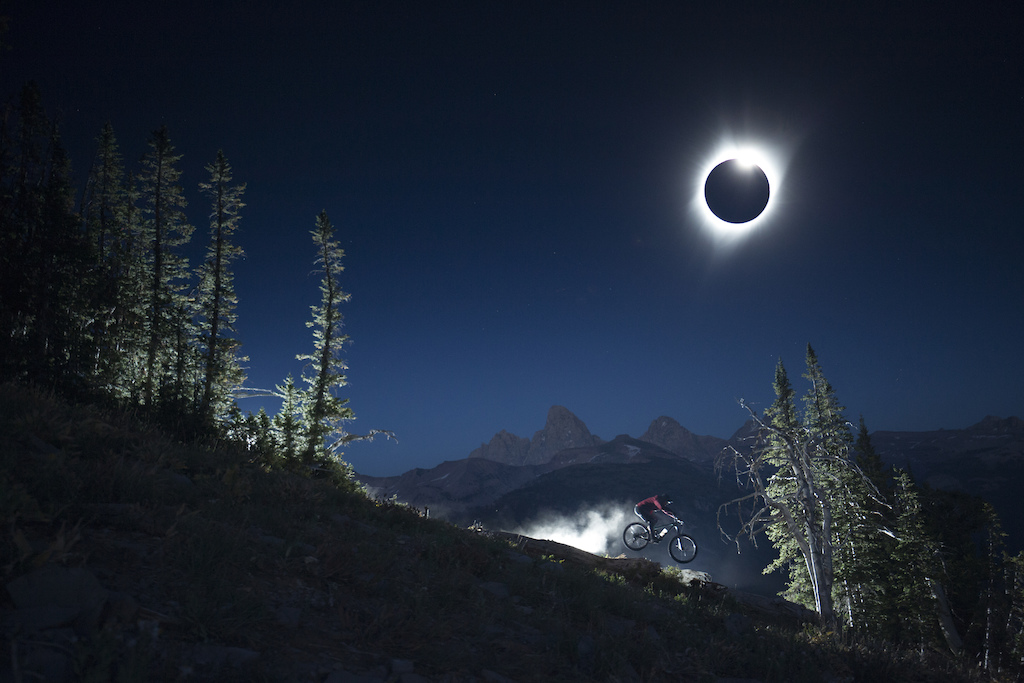 Noah Wetzel, USA, for his shot of Chris Bule riding under the Total Solar Eclipse in Teton Valley, Wyoming, USA.

Images that capture the point in a performance in which the athlete jumps, catches air, free falls, soars. 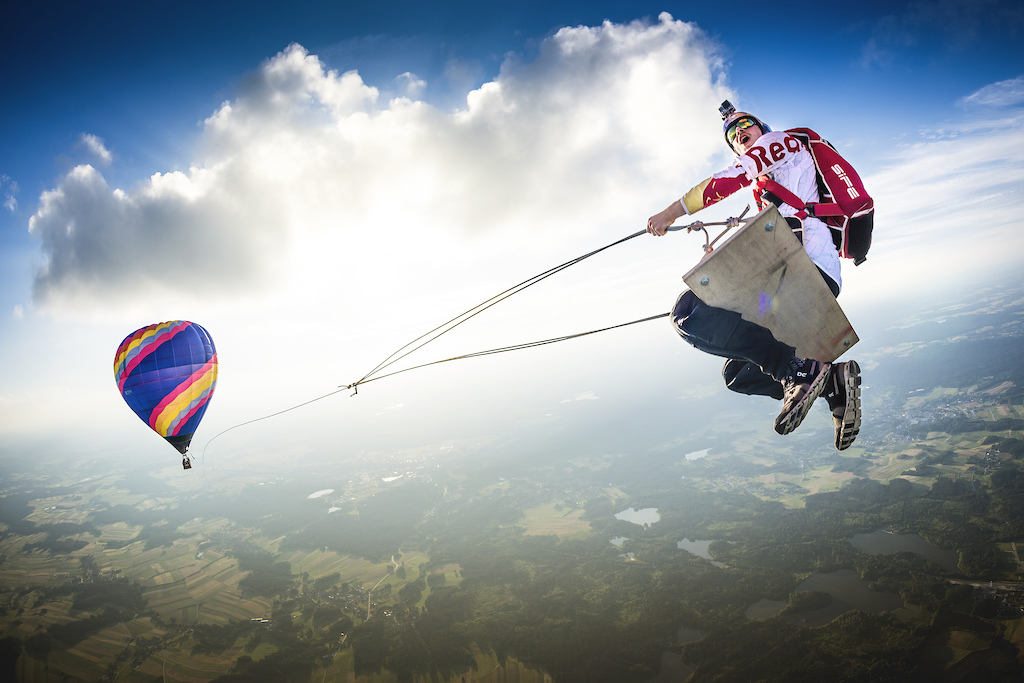 
Learn more about the stories behind the images at redbullillume.com.

szandras (Nov 21, 2019 at 1:53)
Parallel is the best MTB clip I have ever seen. Perfect choreography, amazing execution and an electrifying vibe. Thank you Rupert Walker, Brandon Semenuk and Ryan Howard!

cmrn (Nov 21, 2019 at 8:04)
absolutely. When I came across it I got *that* feeling of seeing something really special. With the wealth of incredible edits that we're spoiled with every year, it's really something to get your mind blown that hard.

szandras (Nov 21, 2019 at 8:27)
@rrolly: I am watching those with my eyes half closed, head slightly turned away from the monitor and every 5 seconds checking that my own bones are still in one piece... this must have been the reason I missed the cinematographic value in those. ;o)

Chilliwacker (Nov 21, 2019 at 2:22)
Totally. Yet more misrepresentation and misunderstanding of our sport. This time by companies meant to be promoting it! No doubt it'll be some suit in the office whose job is to caption a load of photos that they nothing about.

She is simply bicycle motocrossing regardless of the wheel size lol

mtbmaniatv Plus (Nov 25, 2019 at 13:08)
@JOHN8LAZE: Don't know why you're getting defensive, it was a question followed by a silly statement. Not familiar with the area obviously.

JOHN8LAZE (Dec 2, 2019 at 1:55)
@mtbmaniatv: Not defensive mate, was just explaining the intention as think my joke missed the mark here. I get it was only relevant that know the place.

wibblywobbly (Nov 21, 2019 at 5:11)
God help us all if/when Red Bull stops or is forced to stop supporting action sports.

g-42 (Nov 21, 2019 at 7:00)
They've been supporting action sports starting way back with windsurfing (which, for Europe, was the gateway drug I to what we think of actionsports culture these days), and they haven't stopped branching out yet. Given all they produce (Red Bill Media House) and sponsor/support, that's a fair chunk of change. So I'm left to wonder whether the caffeinated sugar water market is just more lucrative than my little brain can imagine or they're perhaps just laundering money for the Austrian Mafia...

ski-bike-repeat (Nov 21, 2019 at 0:17)
Great choices that encapsulated each of their categories. Really enjoyed that, thx

JOHN8LAZE (Nov 21, 2019 at 4:22)
I have always had an interest in photography an dthis year bought my first proper camera in about 20 years, really impressed with my progress and some shots then I saw these.... Thanks a lot PinkBike!

MattyBoyR6 (Nov 21, 2019 at 6:04)
you thought mountain biking was expensive... These are some great inspirational shots. Makes me want to grab my camera and get after it again.

Here's a vid of the full length version of the song......

vandall (Nov 21, 2019 at 6:11)
There is so much incredible action in Parallel that you have to watch it multiple times.

Acid11 (Nov 21, 2019 at 9:45)
Yeah this is my favourite, mind-blowing shot. Only 2 minutes window to get the shot. I drove down from Vancouver to OR to watch the eclipse, the image gives me chills! Does anyone know where you can see more shots from the shoot or more backstory?

martn (Nov 21, 2019 at 12:15)
@Acid11: There's a bit of backstory over on the RB Illume page: www.redbullillume.com/stories/article/category-winner-raw-noah-wetzel.html

Which actually leaves me a bit confused. Either it is a true double exposure resulting in one raw file, which would mean they somehow covered the lens or sensor between the two events in the picture. Or it's a composite of two separate exposures done in post, which would raise the question how it qualifies as being raw …

Tdubbsbikes (Nov 21, 2019 at 19:13)
@Acid11: The photo is amazing but it is not what you would have seen if you were standing next to the photographer. The sun was almost straight up in the sky at 11:00 am in the morning. The sun was much smaller then this in true perspective. The artist took two images at different focal lengths to create this image. One image of the biker with a flash strobe behind the biker. The second exposure was zoomed in on the eclipse putting the eclipse into the right corner of the frame. You cand double expose images digitally in the settings of any camera. Super fun to do and very artistic. The skill of the artist is impressive but the lack of transperity is frustrating.

NoahWetzel (Nov 22, 2019 at 14:48)
First off, thank you to all of you for your support! With that said, I'm only going to post this one comment. Just remember there's a lot that goes into these images. If every semifinalist was required to go into the most extreme detail about their image... the ceremony would have lasted 3 days and the book would be 800 pages long haha. If I remember, I only had 150 words to write this explanation... to explain the whole story behind this shot. There's so much that went into it. I mentioned more details about the shot originally, but had to boil things down even more to fit other details in. It's my job to describe the image as easily as possible without confusing anyone with extra detail...and for an image that took 3 months of planning and conceptualizing...to days of scouting...to the actual pressure intense moments that created this image...it's just simply hard with 150 words to do justice. Regardless, thank you so much for all your interest in the image, literally it can be summed up as....extremely calculated and extremely difficult. If you still can't understand how the image was captured, don't worry, you're not alone. For me, I thought long and hard for 3 months of how I could pull this off, and finally one night it came to me. I haven't had much luck with other in-camera double exposures because it is extremely difficult and very hard to grasp. But, you can bet your ass I have some more ideas that I'll be trying to make happen...and those start now. That is the beautiful thing about photography, a lot of imagery you see...will be hard to understand and truly figure out how the photographer captured it...that's what makes it so special. At least in this scenario, you know it was captured as a raw image, and there's no discussion as to whether manipulation in photoshop was involved

. With that said...one last thing...of course a contest of this nature would check the RAW file in the RAW category before they finalized everything, I mean...common people haha ha it's one file...it's an in camera double exposure as explained. Thank you and goodnight!

fattyheadshok (Nov 21, 2019 at 10:16)
These photos are all stunning. Everyone. The eclipse shot is particularly stark.

el-nombre (Nov 21, 2019 at 5:06)
The viaduct is near me. I tried to ride it a long time ago. It didn't go that well. It's super tight, and that was on a BMX rather than MTB. Skateboard is probably a bit more suited in that sense.

jesse-effing-edwards (Nov 21, 2019 at 7:40)
So much photographic gold. Lorenz Holder is incredible. And Rupert's scene is a bit mindblowing. Drone footage?

Then you click on the movie to watch a 30 second clip that goes for 2:40

joeadnan (Nov 22, 2019 at 3:08)
Can someone explain how the Katy Wynton photo was shot? It would have meant that she would have to ride through the camera? I can’t figure it out

teocalli (Nov 21, 2019 at 8:25)
Anyone know where you can buy the photobook in the USA ?
Shipping is too expensive from the UK through COOPH