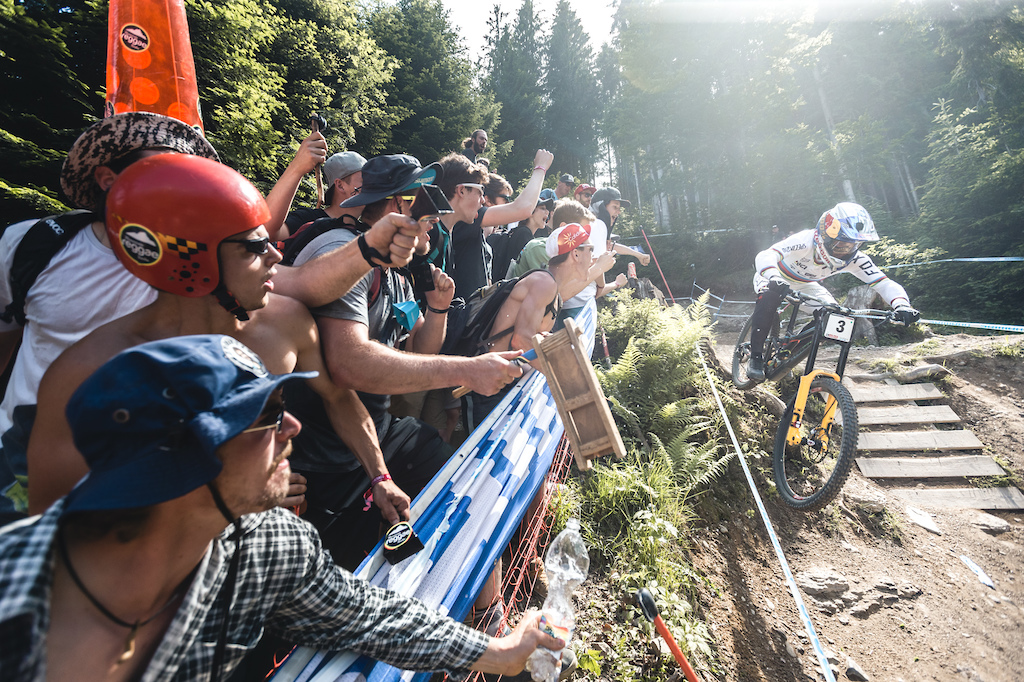 Saalfelden Leogang will once again become the focal venue for the mountain bike scene on a grand scale: The UCI Mountain Bike World Championships in Downhill and Pump Track, originally planned for September 4th to 6th, 2020 at Epic Bikepark Leogang, will be moved to October and extended with two extra disciplines. From 7th to 11th October 2020 Saalfelden Leogang will host the UCI Mountain Bike World Championships and in addition to the already confirmed disciplines of Downhill and Pump Track, Cross-Country and E-Mountain Biking will also take place in the Pinzgau region. 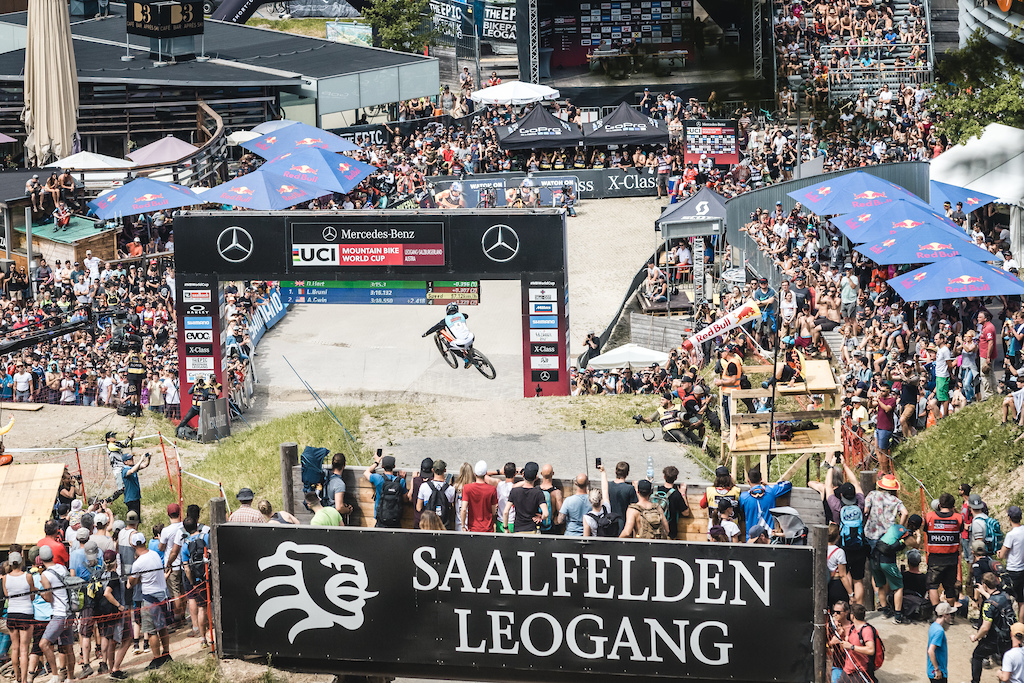 The UCI, the Austrian Cycling Federation and the region Saalfelden Leogang announce good news for the bike scene: this year will be the second time the UCI Mountain Bike World Championship will take place in Saalfelden Leogang after 2012. As previously confirmed, UCI title battles in Downhill and Pump Track (postponed by more than a month) as well as the two additional disciplines of Cross-Country and E-MTB make this the quadruple World Championships. The world's best riders will transform Epic Bikepark Leogang into the ultimate bike hotspot from October 7th to 11th, 2020 and compete for the coveted rainbow jerseys. The Cross-Country and E-MTB competitions were originally scheduled for the end of June 2020 in Albstadt (GER), but fell victim to the corona crisis. Eight years ago, the picturesque mountain range Leoganger Steinberge and the Steinerne Meer were the backdrop for four World Championship disciplines: Downhill, Cross-Country, Four Cross and Trials. 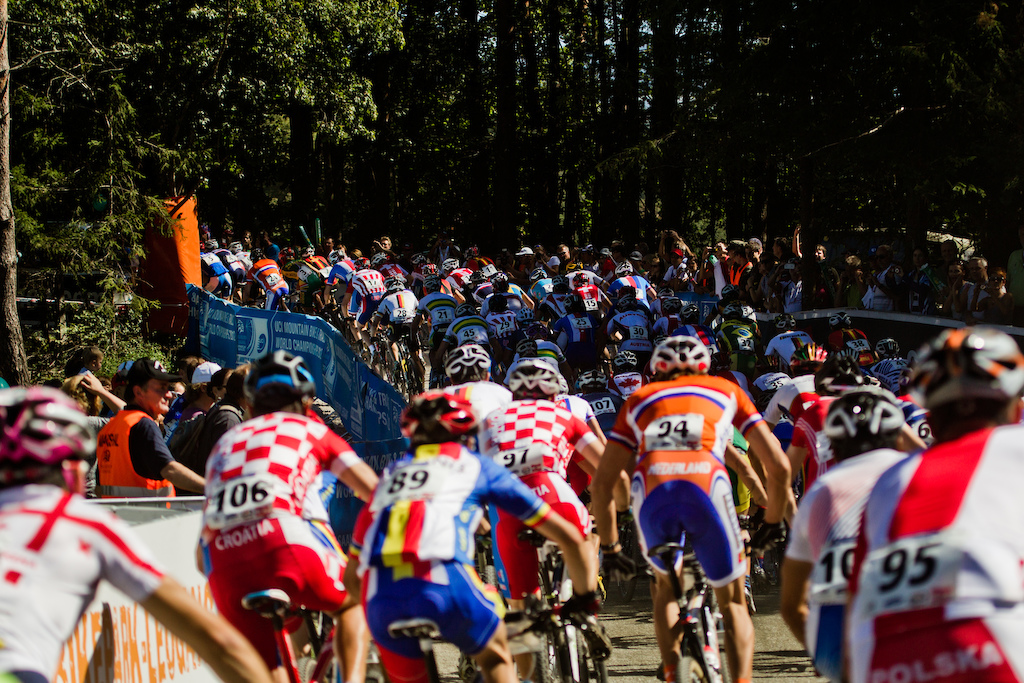 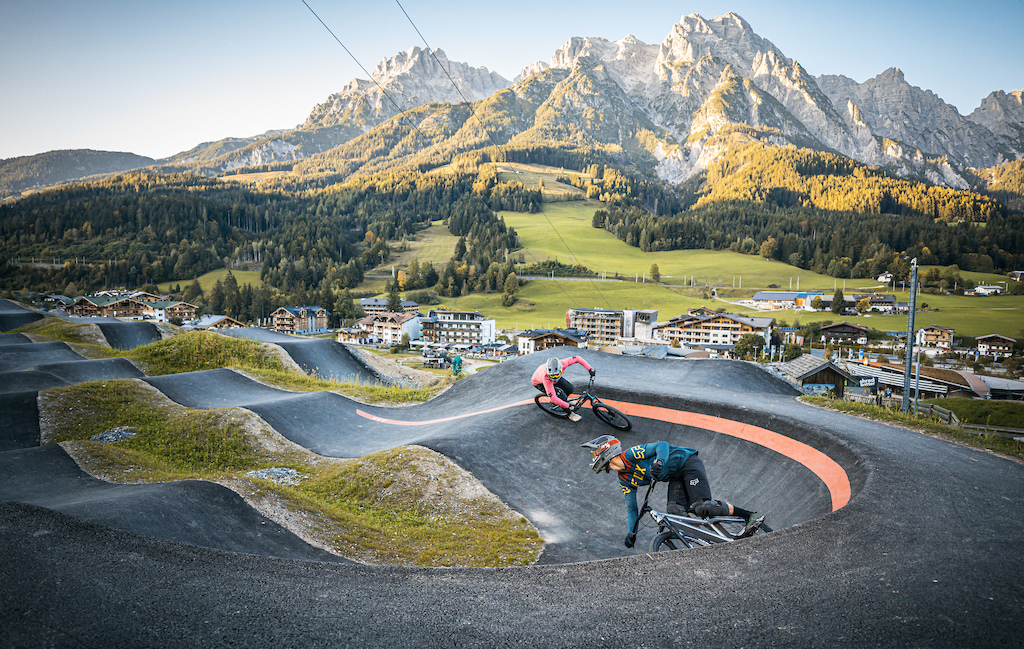 Marco Pointner, World Championship organizer and CEO of Saalfelden Leogang Touristik is also enthusiastic: "The past two months have been very nerve-wracking in many aspects. Unfortunately, the World Champs in Albstadt along with some World Cup races have been cancelled, with other World Cup races postponed, to commence not before September. As a result, we have seen ourselves increasingly responsible for making a mountain bike World Championship possible for the riders, teams and sponsors, but also for the fans. The fact that we now have certainty is a great relief and brings huge anticipation for all of us. If the competitions can still take place with fans and spectators trackside, that would of course be the icing on the cake." 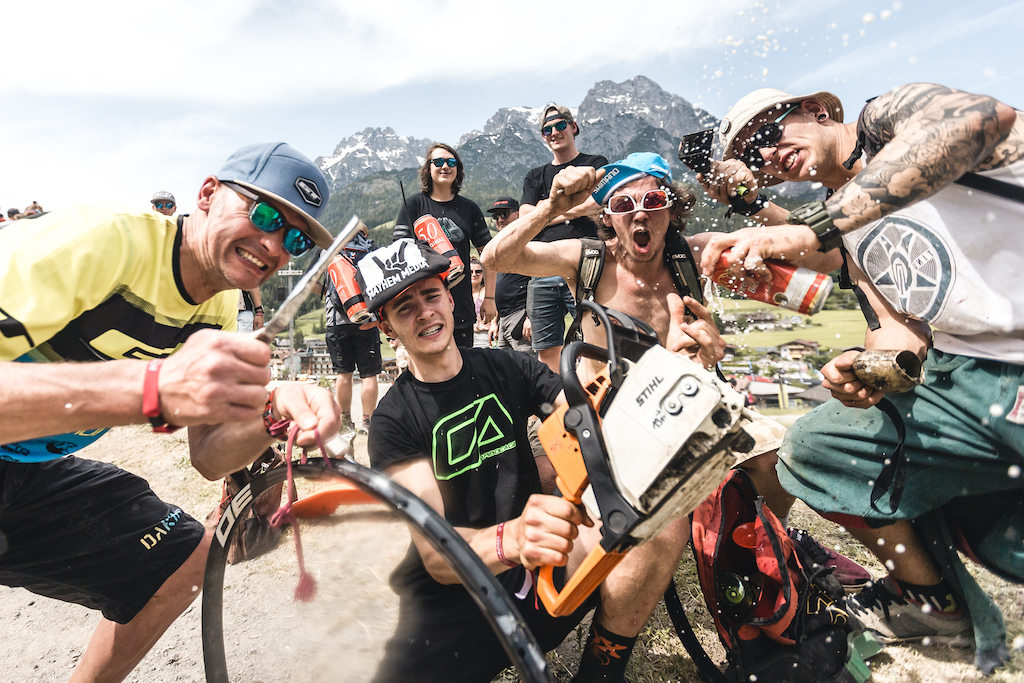 Whether the UCI Mountain Bike World Championships can take place in front of an audience, as well as information about the schedule, course layout, supporting program and much more, will be announced in the next few weeks. All details are also available at: www.bikewm2020.com

Pure riding fun in Austria's largest bike region
With the relocation and expansion of the UCI Mountain Bike World Championships, the good news continues for the Saalfelden Leogang region. Recently, the opening of the Epic Bikepark Leogang on 29 May 2020 was announced. There will be pure riding fun from 11 June when Saalfelden Leogang joins forces with Saalbach Hinterglemm and Fieberbrunn to form Austria's largest bike region. Over 70 kilometers of single trails, downhill tracks and flow lines with the corresponding nine mountain railways are included in the new joint bike ticket. 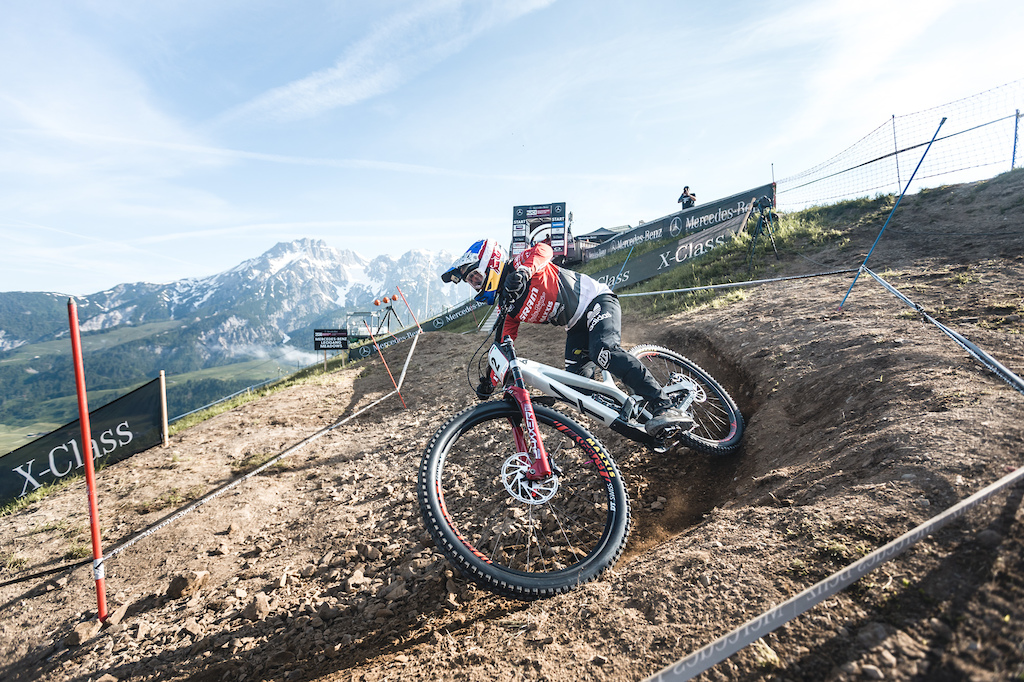 Further information about the Epic Bikepark Leogang can be found on: bikepark-leogang.com.

Upon request, all tours can be accompanied and led by qualified guides of the school Element Outdoorsports as well as an individual training to improve your skills. To make your biking holiday absolutely perfect, special bike hotels such as Salzburger Hof, Bio Hotel Rupertus, Hotel Bacher, Hotel Riederalm, Hotel Ritzenhof, Mama Thresl, Hotel Krallerhof, Hotel Forsthofalm and Hotel Der Löwe and competent bike shops such as Sport Mitterer or Sport 2000 Simon are at your service here . 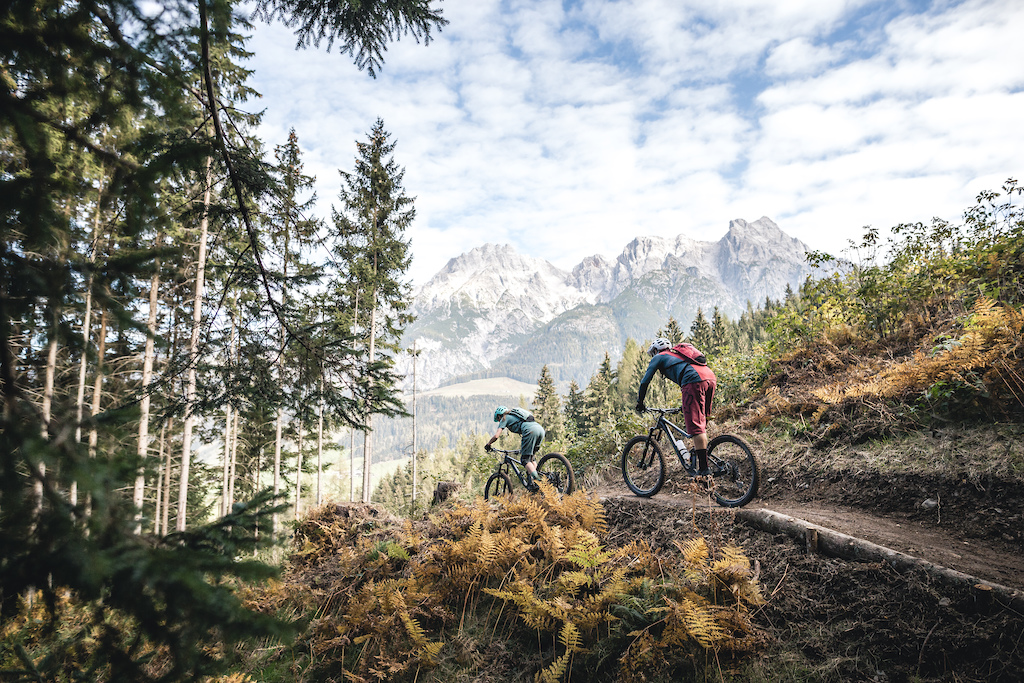 Tweet
Must Read This Week
Interview: Trek's Travis Brown On Experimenting With 32" & 36" Wheels
85892 views
First Ride: Cannondale's All-New Scalpel SE
72364 views
Ridden & Rated: 4 of the Best eMTB Motor Systems for 2020 - Bosch vs Brose vs Shimano vs Fazua
61883 views
Pinkbike Poll: If You Had to Ride One Bike for the Rest of Your Life, What Would It Be?
53430 views
Video: Conflict Arises Between 17 Year Old UK Rider & Apparent "Trail Saboteurs"
52242 views
First Look: ShockTune is a Free Suspension Setup App
46530 views
Video: Claudio Caluori Tries to Keep up With Nino Schurter on his Home Trails
45454 views
Bike Check: Ben Cathro's Santa Cruz V10
35572 views

Anyway, fingers crossed for World Champs, it'll be amazing if it happens.

liketoride1 (May 16, 2020 at 7:41)
Specialized will take care of that as soon as they get wind of someone using their word

Sshredder (May 16, 2020 at 8:51)
E mtb race? I'd rather watch real motor cycles in an MX race verses gutless electric bikes. Can you imagine admitting you are an Electric mountain bike racer ? Sounds comical.

ldhbaker (May 16, 2020 at 7:30)
I just don’t get why e-mtb world champs exist. The world champs in every discipline are meant to test the best of human / gravity powered biking. E-mtb just waters that down and makes it about, what, the bike? Can’t wait to not watch all the B, C, and D level racers that probably never raced at a high level before whizz around a track using external power sources.

felixlongpre (May 16, 2020 at 9:45)
I think E-mtb requires more technical skills and climbing VO2max than traditional XC (the races are won on the really steep parts only and use DH trails), and doesn't require any power on the flats (more than 25km/h). I raced to two top 30s in XCo world cups and raced the Ebike world champs last year in MSA after borrowing a bike the day before. Really played into my strenghts and had the best time ever in a bike race. Felt like mario kart at max heart rate!
But the concept of crowning a world champion is indeed a bit weird.

jaame (May 16, 2020 at 10:57) (Below Threshold)
By the same token, isn't it cheating to use gravitational assistance?
Should suspension be banned, because motorcycles have suspension?
Should course marker tape be allowed, because they use that in running races?
Should the competitors be allowed to wear clothing, because they wear clothing in tennis. So like, it's basically tennis if you wear clothes.

DylanH93 (May 16, 2020 at 13:16)
@jaame: Seriously, I ride a rigid single speed and feel like I'm the only authentic rider out there. You want suspension? You want a drivetrain and different gear ratios? Just go ride a motorcycle fool!

jaame (May 16, 2020 at 13:26)
@DylanH93: hellz yeah. I ditched the singlespeed when I realised it was basically a motorbike - it had handlebars and two wheels FFS. Who was I kidding? Only myself.

Now I ride everywhere on my small horse. Or is that a pony?

felixlongpre (May 17, 2020 at 5:05)
@headshot: Were you here last september? How do you rate La Tordue in terms of DH trail? You are right it was raced up steep ski hills and DOWN the DH trails. But to be fair the fact that the bikes have big travel made it the equivalent of regular XC, just more fun in my opinion as a participant.

styriabeef (May 17, 2020 at 10:28)
@felixlongpre: I don't question e-mtb racing either. But I think there should exist a solid global series, with refined rules and a deep competitive field. Just like enduro. Oh, wait...

jaame (May 16, 2020 at 0:14)
World cup/world championship week.
They have one full round on every track for as many days as it takes to exhaust all the tracks. If they only have three they could go old school and have DH races down the uphill parts of the cross country track.
A full red bull feed every afternoon for a week. The points tallying up. World cup champs crowned on Saturday night but no partying because the world championship will be on the Sunday. The whole season in a week! Picture the excitement!

GrandMasterOrge (May 16, 2020 at 4:45)
Epic Bike Park? They haven't been taken over by the Epic/Vail lift pass lot from the US have they?

Here's hoping (but not expecting) they finally sort a better track out at Leogang, 11 years after being granted the event. I'm aware they have land access issues around the track but that doesn't make the current track any good.

Floho (May 16, 2020 at 6:17)
I certainly don't expect that there will be a completely new track, maybe some small changes. And for a regular season, I actually think leogang is just fine, it brings something unusual into the mix. But for world champs ? Not so sure if the austrian bikepark-autobahn is the right track.
Actually its quite sad that we only saw Leogang recently, because there are some seriously great DH tracks in the austrian alps, deserving of a big race.

scantregard (May 16, 2020 at 6:57)
I've ridden Leogang, they have the trails already higher up the mountain. the current DH course starts roughly halfway up, certainly the middle lift station. red bull need shorter courses for filming. all that said they could easily route an off piste DH course purely for world & only use short sections of the built bikepark stuff... not sure why they havent done more of that previously.. likely cost related

The track issues are apparently caused by land owner issues in the woods surrounding the bike park. Back in 2010 before they had the first race there, I had a chat with the resort marketing manager at the time and he reckoned they'd be building a complete new track for the WC race if it became a regular thing, it's just a shame 11 years on that never happened. It's not like it was investment for a one off event and that track was battered in 2010!

I don't really care what Red Bull want from a track, I know they pay for the coverage but they should cover the best tracks out there not dilute the tracks for the benefit of making it look appealing on screen to non-riders.

drmantistobogganmd (May 18, 2020 at 0:31)
Would of been a good idea to get a month or even more of league rounds in near the region. Within a relatively short driving distance close by you have Maribor, Schmladig, Innsbrook, Kranjska, Krvavec. All in two countrys that haven't really been effected by covid. From what I hear, Maribor is open for business today!

felimocl (May 16, 2020 at 13:18)
@mtbikemccoy: agreed pump tracks are great fun. But surely 4x or even dual slalom are a better representation of athletes and their respective disciplines and mtb as a whole.
Like it seems that the pump track event at crankworx is more of a social/media event where athletes from different disciplines can compete against eachother. Pump track world champs makes about as much sense as that new XC discipline racing around a course in a city.

likehell (May 18, 2020 at 0:49)
@felimocl: What is the point of any world champs?
Best one wins, here we have a mix of BMX, DH, Dirt.. talent going for it.
Pumptracks will be the ultimate thing in cities to bring the kids to riding bikes, and why not have championships?

I am all for Dual Slalom as well, because it is easy to do nearly everywhere.. just a small hill needed.

I mean, who rides 4X anyway?

But anything is better than ebike racing, lol.. so we can agree to kick that, and add Dual World Champs instead!