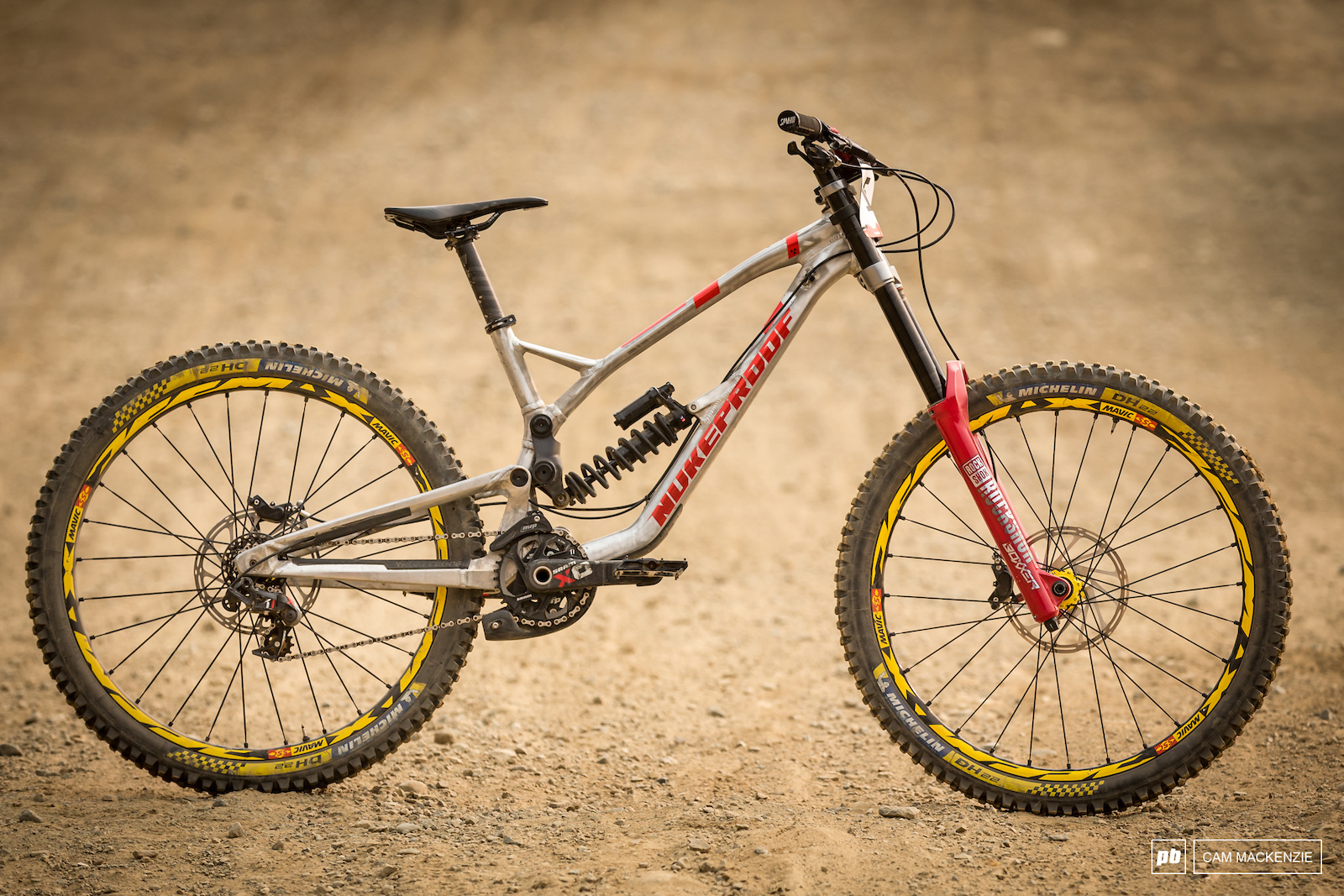 Sam Hill's Prototype Nukeproof DH Bike
Sam Hill may have made the switch to full-time enduro racer, but he's still a force to be reckoned with on the downhill bike, as his victory in the Garbanzo DH at Crankworx Whistler clearly shows. There's also the fact that it was only his second ride on the prototype Nukeproof he was aboard (the first ride took place the day before).

The 27.5" bike does have similarities to the current Pulse, but it's more of a test mule than a fully refined and finished product - the final result is going to look a bit different, and there's a good chance that it'll also have a new name when it's officially released. At the moment, the most visible change has to do with where the rocker link is positioned - it now sits outside of the seat tube, rather than being tucked inside a split in the frame. Moving away from that clamshell design helps to shed some weight, and it also means there's the possibility this suspension layout could make its way onto a bike that's not strictly designed for DH riding. 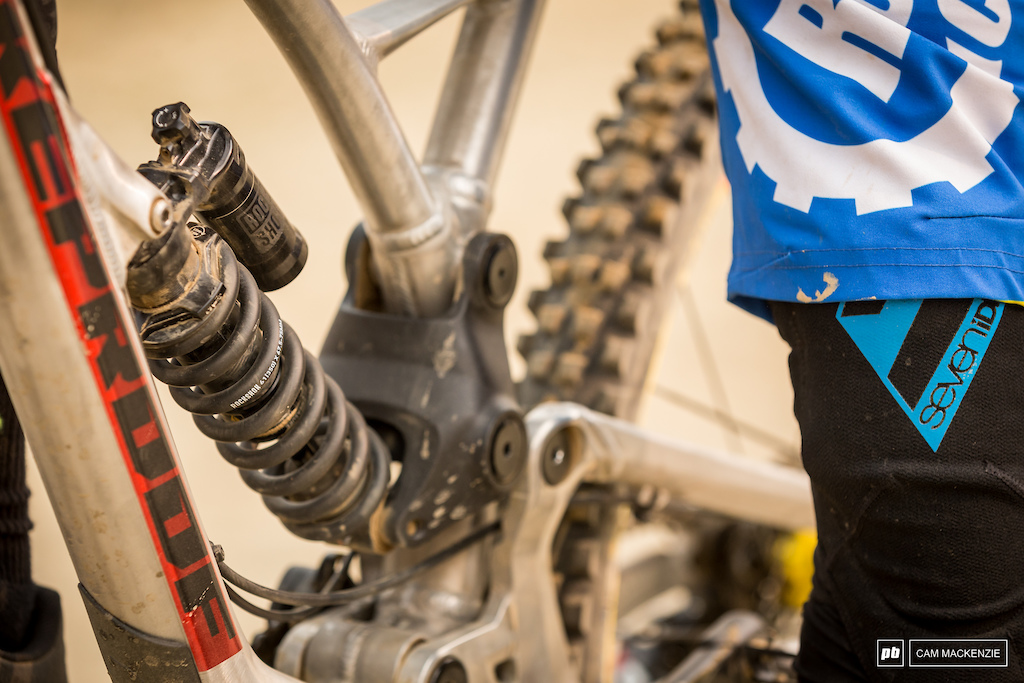 The mule in its current form... 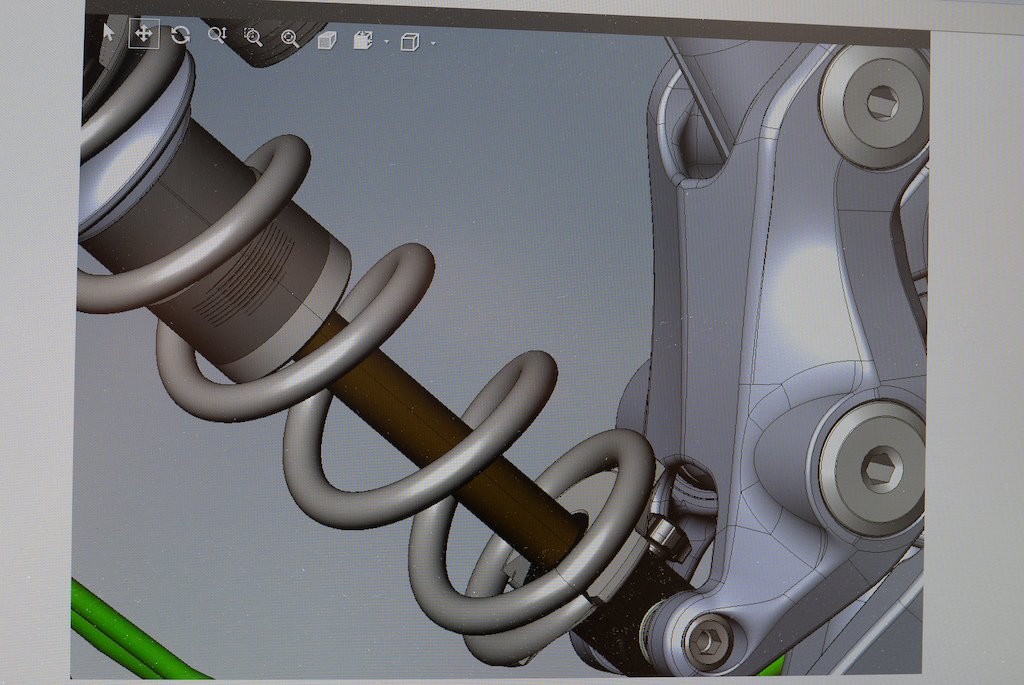 ...And a computer rendering of what the final upper link will look like.

One interesting feature that's not immediately evident is the ability to change the position of the bike's main pivot in order to alter how progressive the suspension is. It's not uncommon for World Cup race teams to use different custom machined links to alter a bike's suspension feel for different riders, but with this feature a similar result should be possible by undoing the non-drive side main pivot bolt and selecting another position. Exactly how many positions there will be has yet to be determined - more testing is in the works to figure out what works best. 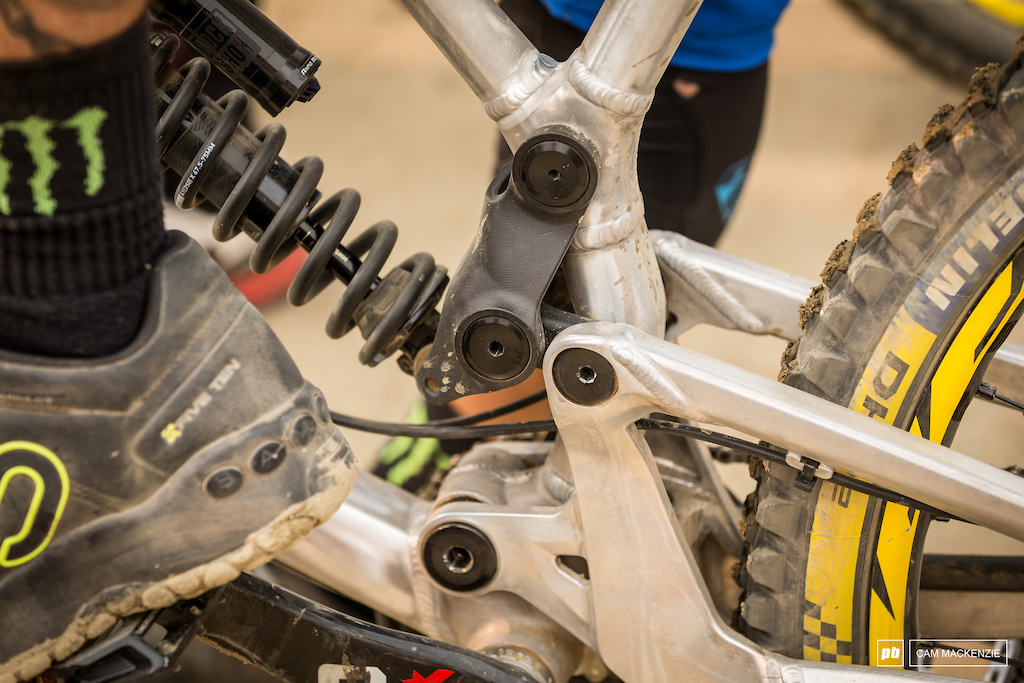 The bike has 200mm of travel, and multiple positions for the main pivot in order to alter how progressive the suspension feels. 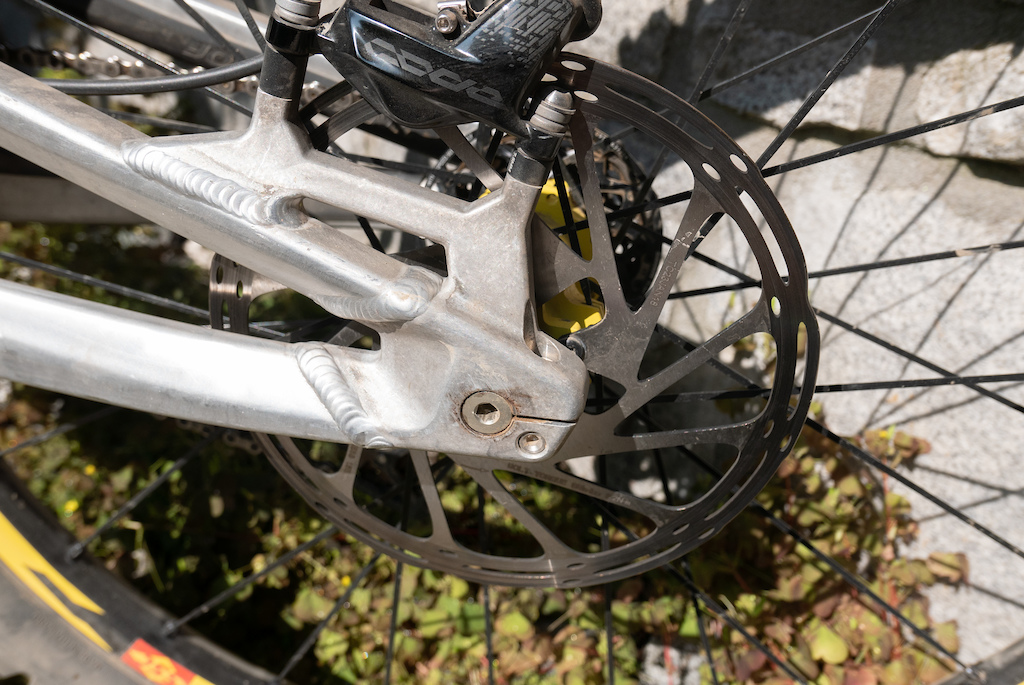 This version has a fixed chainstay lengthy, but having two axle positions hasn't been completely ruled out.
There were rumblings of Nukeproof making a carbon DH bike a few years back, but at the moment there still aren't any plans to go that route with the new bike. According to Nukeproof, they're able to hit the weight goals they want with aluminum and don't see any need to go with carbon, at least not yet.

When the new bike comes to market sometime next year it will also have a 29"-wheeled counterpart, but there will be two different, unique frames, rather than one frame that accepts both wheels sizes. Steve Jamison, Nukeproof's product manager, said that he sees the two options as being more related to rider height rather than anything else - taller riders will likely gravitate towards the 29" version, and smaller riders will pick the 27.5" option. 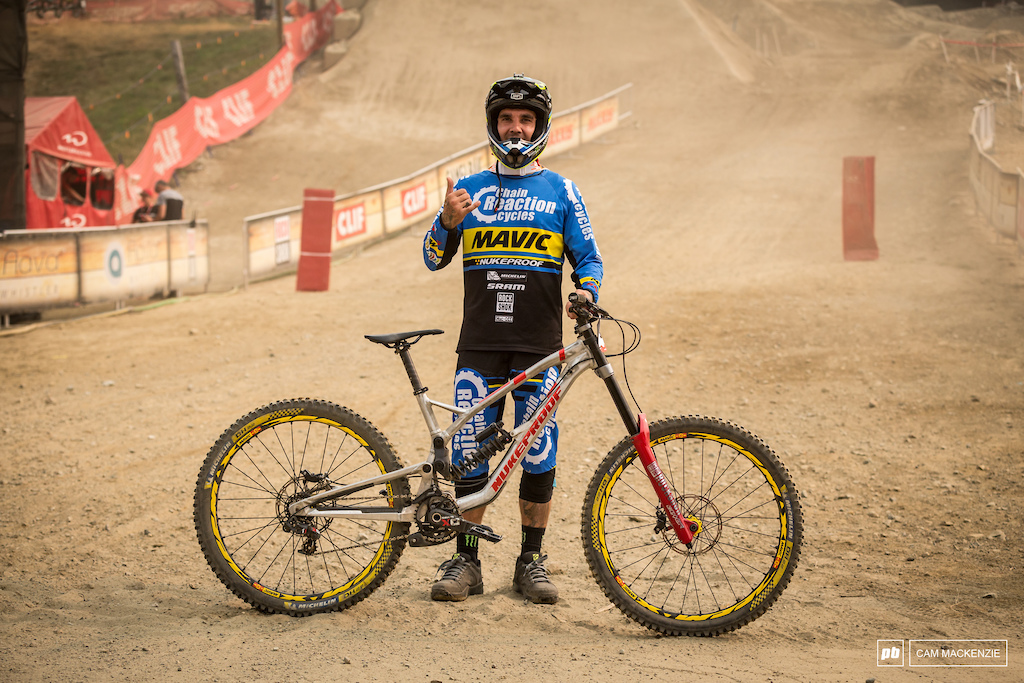 grundletroll (Aug 15, 2018 at 16:36)
@fecalmaster: not unless he rides atleast one uci dh race this year. last year he said it was his last world champs, that's why he did the fort William's race

heavyp (Aug 15, 2018 at 17:15)
Over on Vital the rumour is Nukeproof are pulling out of DH if this is anything to go by they should get back on the DH bandwagon with some new riders

fecalmaster (Aug 16, 2018 at 4:35) (Below Threshold)
29erds can kiss someone's ass,,, seriously whoever makes it down first wins. #wheelsizematters?

Jimmy0 (Aug 15, 2018 at 13:59)
I'm 6'5" and like 27.5. Raced both, timed both, and am faster on 27.5 probably because I like it.
I get the height argument but we tall folk also are long limbed with a high center of gravity, making straights easier and corners harder (generally, comparitively).
So ya that's my opinion thank you all for not asking for it.

Rubberelli (Aug 15, 2018 at 14:18)
The last paragraph says the choice is based off rider height, not personal preference.

mkotowski1 (Aug 15, 2018 at 14:51)
@Rubberelli: it’s implied, hence the line “gravitate towards.” He’s not saying the either bike is just for shorter or taller riders.

fecalmaster (Aug 19, 2018 at 0:13)
@southoftheborder: Luckily I don't live or ride by any mandates, money means nothing when you have a stethoscope up your ass.

Rubberelli (Aug 21, 2018 at 14:38)
@bizutch: which also prevents any bike maker from developing one if they have a WC team they spinsor. You can do it yourself, but you would slacken the HA and raise the BB, so maybe less than ideal.

Pinkbike: "Sam Hill took the win in the Garbanzo DH on a [new] prototype Nukeproof, a bike he'd only ridden once before."

Damn, cobwebs must develop fast in his garage!

vinay (Aug 23, 2018 at 23:27)
If it is a prototype, the engineers and testers at Nukeproof probably had a fair few runs on this bike before it even reached Sam Hill. You want to be sure the bike is at least half decent before you waste his time.

atrokz (Aug 25, 2018 at 7:53)
@BaeckerX1: I think we should all get angry about something we know 0 about and start downvoting eachother like it maters like a bunch of idiots.

BaeckerX1 (Aug 28, 2018 at 12:07)
@atrokz: I agree. Maybe you should have just left the comment alone (which was a joke by the way) instead of contributing your contrary 2 cents and then defending yourself trying to be right. Ha.

atrokz (Aug 30, 2018 at 4:46)
@BaeckerX1: I just gave 2 cents about test rigs being old before being seeing by public. It was merely an opinion people decided to be dicks about. But hey, par for the course on PB. I should know since Ive been here since day 1.

BaeckerX1 (Aug 31, 2018 at 8:38)
@atrokz: No offense, but your comment was the one that sounded like you were being a dick, replying to an obvious JOKE with a know-it-all comment (which was pure speculation, by the way). That's what you're not getting. You should just think about it and not get so defensive. At this point, the post is 16 days old and you're still complaining about it. Just move on and live your life.

I seriously don't understand people on the internet.

atrokz (Sep 2, 2018 at 5:49)
@BaeckerX1: the only reason Im replying is because you keep brining it up. I dont care if you thought a harmless comment was being a dick. Just shows how much of an a*shole you are. f*ck off and go ride a bike. Done.

BaeckerX1 (Sep 3, 2018 at 19:24)
@atrokz: Wow. Talk about having to have the last word. Read your comment again and look who is being immature. Haha. You are something else man.

qldmtb (Aug 15, 2018 at 14:36)
Might be getting the prototype sorted for next season, do a few world cups, then have a crack at the worlds in MSA where he has done well in the past.

showmethemountains (Aug 15, 2018 at 15:25)
Nukeproof Fridge. Indiana has already been testing a prototype

Milko3D (Aug 16, 2018 at 7:15)
@Nukeproofinternational: asking the public for a name, you know you're gonna end up with Nukey McProofface or something

westagil (Aug 15, 2018 at 13:58)
i like that it uses the super deluxe coil with a ballbearing on the rocker eyelet. but it seems that in the cad drawing they went with the standard bushings. just keep the ball bearing, if it works now why go away. runs more smoothly than the normal bushing.

spaceofades (Aug 15, 2018 at 14:12)
Best to design your frame around a cheaper option, than to raise your prices for low end builds because you wanted a bearing eyelet

spaceofades (Aug 15, 2018 at 14:15)
@westagil: bearing takes a little more space, but both will fit. Same dealing as the Nomad 4, lower end builds have bushings while the linkage is still compatible with a bearing eyelet.

Mntneer (Aug 15, 2018 at 13:51)
I love what nukeprkof puts out, but their bikes are never available when I'm in the market for a new bike. At least not the particular model I want. This is looking promising

anchoricex (Aug 15, 2018 at 14:38)
hello my name is sergey nukeprkof would u like to buy beautiful bmw 4 door sedan? never wreck before, you dont need to see carfax. i assure you, car is clean

Shreddywhip (Aug 15, 2018 at 19:14)
What I got out of the last paragraph: there's two sides to every coin, so we are going to offer two wheel sizes. People who obsess about either one & who are overly vocal about it, will gravitate towards being a douchebag. Btw, huge congrats to Sam!! "I'm gonna ride this bike a little & see if I can grab a win tomorrow".

zyoungson (Aug 15, 2018 at 15:58)
Finally someone talking sense about wheel size, larger riders will tend to go with 29, just personal preference and sizing

Hetman64 (Aug 15, 2018 at 14:57)
Hopefully this new rear suspension design won't have similar design flaws as the current Pulse does.

Hetman64 (Aug 16, 2018 at 0:32)
@jibb: Front and rear triangle colliding during bottom out of rear suspension causing the frame to crack in one spot.

Hetman64 (Aug 16, 2018 at 6:27)
@jibb: I have heard several people saying that the shock is too short so it's most likely that. If it was literally couple mm longer there would be no problem. I'm on my second frame with this issue and trying to sort it out through warranty again.

Dannbryant (Aug 15, 2018 at 16:44)
Does anyone know what program they use to design this bike and other bikes? AutoCad Inventor?

patrickbatemanworldtour89 (Aug 15, 2018 at 14:12)
It's kind of like being invisible as a kid, it definitely works as long as no one is around to see and you believe hard enough.

energetik (Aug 16, 2018 at 5:25)
Oh yeah! Now I see it... No really some one needs to pry that brand away from Dorel and resurrect it with a proper business model this time.

patrickbatemanworldtour89 (Aug 16, 2018 at 9:13)
I was hoping for two linkage rockers top and bottom with a solid rear triangle when I first looked, that old Sunday DW linkage look.

@energetik Yes they do! Can you imagine the Sunday with updated manufacturing methods and geometry? Or a Yakuza? Iron Horse in their prime had the most lust worthy bikes.

godfried (Aug 15, 2018 at 15:20)
Let's put the skill level aside. Riders with bigger wheel size definitely have a better chance in winning a race over the smaller wheel riders.....
here is something to think about. Just to be fair to each single rider who wants to join a race event. Should we have 3 separate wheel sizes' classes for any kind of race event like what we have been using in different classes categorized by age groups or skill levels like Pros, Masters, Experts, Beginners, Juniors, etc.?

takeiteasyridehard (Aug 15, 2018 at 17:48)
@zyoungson: I think opinions like his are for justifying their own bike purchases to themselves....