Join Pinkbike  Login
The City of San Jose is no stranger to the action sports scene. The Lake Cunningham Regional Skate Park is the largest skate park in California at 68,000 square feet. Featuring the world’s largest cradle, tallest vert wall, and largest full pipe, the LCRSP offers a wide variety of terrain for all skill levels to learn and enjoy. The LCRSP is open to bikes, skateboards, scooters, and inline. It is home to the annual Tim Brauch Memorial Bowl Contest, part of the annual World Cup of Skateboarding Tour. The addition of the Bike Park will expand the action sports offerings to 10 full acres. 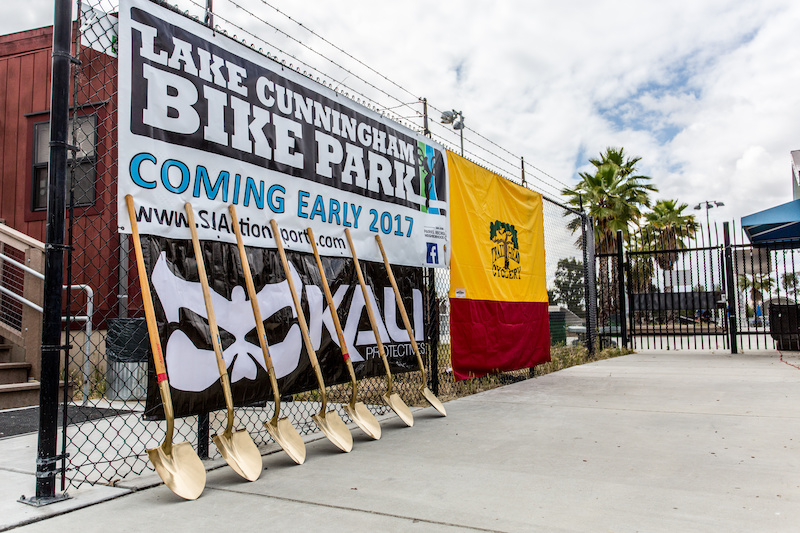 The Golden Shovels were lined up for the groundbreaking ceremony of the Lake Cunningham Bike Park, coming in early 2017. 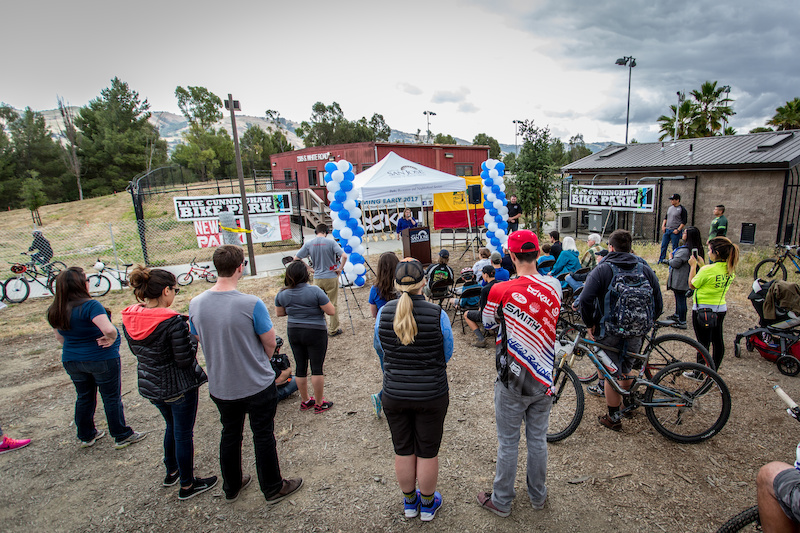 A good sized crowd showed up to the Groundbreaking, with nearly 100 attendees on hand.

This vision for a world-class bike park was no whim. The Bike Park steering committee, made up of industry leaders from Specialized Bicycles, Fox Racing, Kali Protectives, pro riders, local bike shop owners and community members began meeting with Parks, Recreation & Neighborhood Services (PRNS) staff in 2011. In the summer of 2012, a conceptual plan was initiated for a bike park at Lake Cunningham. The plan was developed by the Trails Solution program of the International Mountain Bicycling Association. The conceptual plan offered a viable and compelling vision for enhancing the park and meeting a community need. 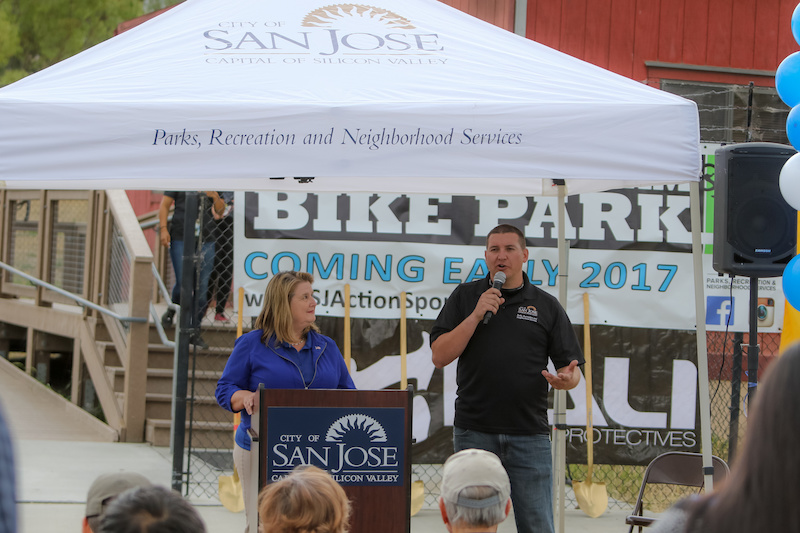 Justin Beck, Action Sports Specialist with the City of San Jose, introduces Vice Mayor Rose Herrera. The Vice Mayor was enthusiastic about breaking ground on the project. "The East Side needs this. I can see at risk youth being drawn into programs here at the bike park", Vice Mayor Herrera exclaimed. 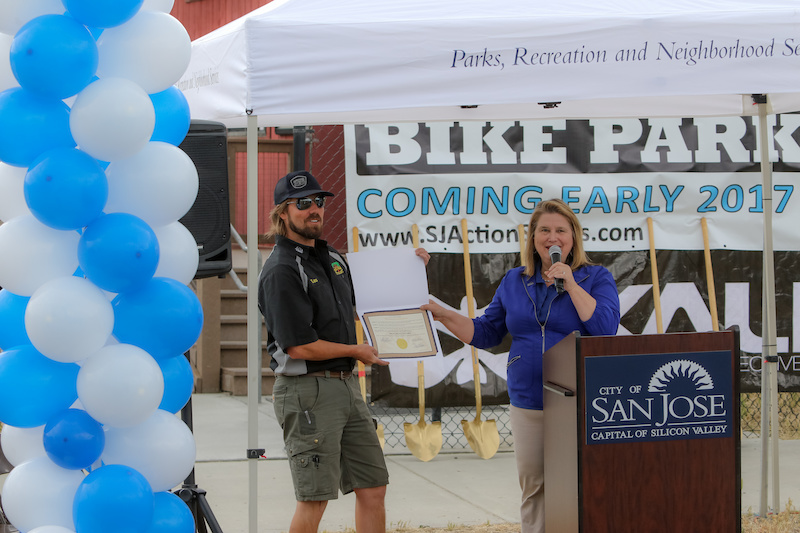 Vice Mayor Rose Herrera hands an award of accommodation to Lars Thomsen, owner of Trail Head Cyclery. Trail Head Cyclery is a local bike shop who supports lots of local riders and community projects including the famous flow trail at Soquel Demonstration Forest. When asked how he felt the park would impact the shop, Lars said "It will be great for us. We will add a rental fleet of DJ bikes and will stock parts and accessories for that rider group". He mentioned other locations such as Calabazas, a place where local Haro rider, Ryan Nyquist grew up. "Calabazas was a good place," Thomsen said, "but it had a rougher crowd and was a place that wasn't closely monitored, whereas Cunningham is a city run venue with supervision and it's super family friendly". 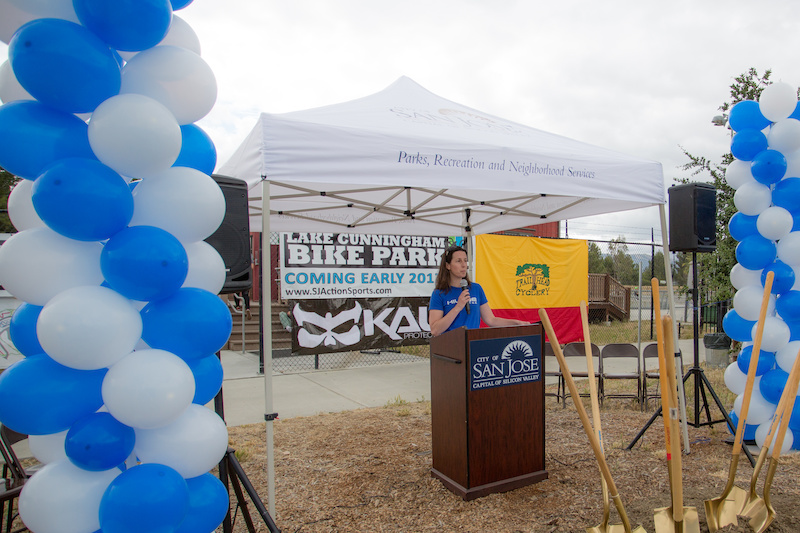 Rachael Lopes, from Hilride, talks about how they worked with Wormhoudt Inc and Verde Design to design a park for all ages and abilities. After the dignitaries were done on the microphone, they grabbed the shovels and made it official. 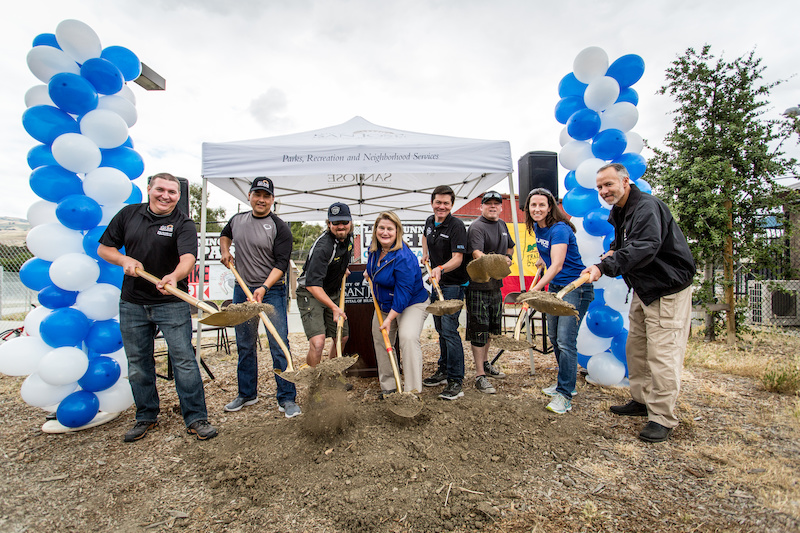 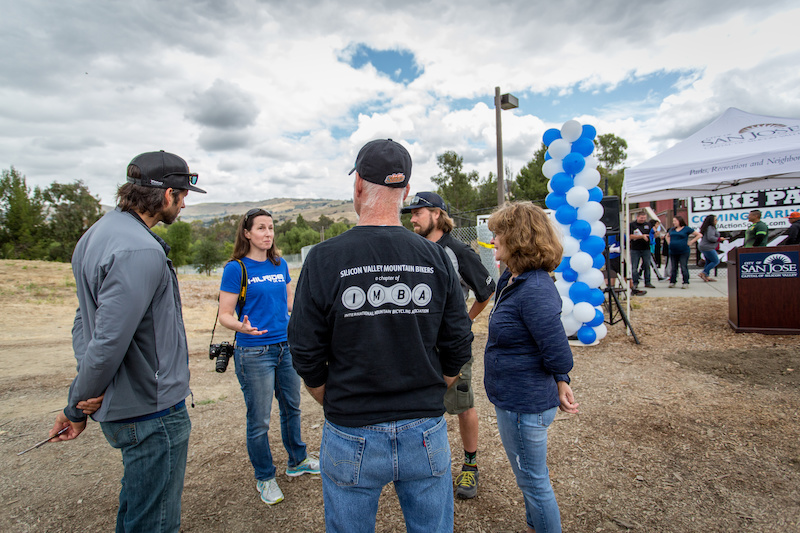 Sean McKenna, President of the Silicon Valley Mountain Bikers, a local IMBA chapter, was on hand to celebrate. With Ground Broken, the festivities began. 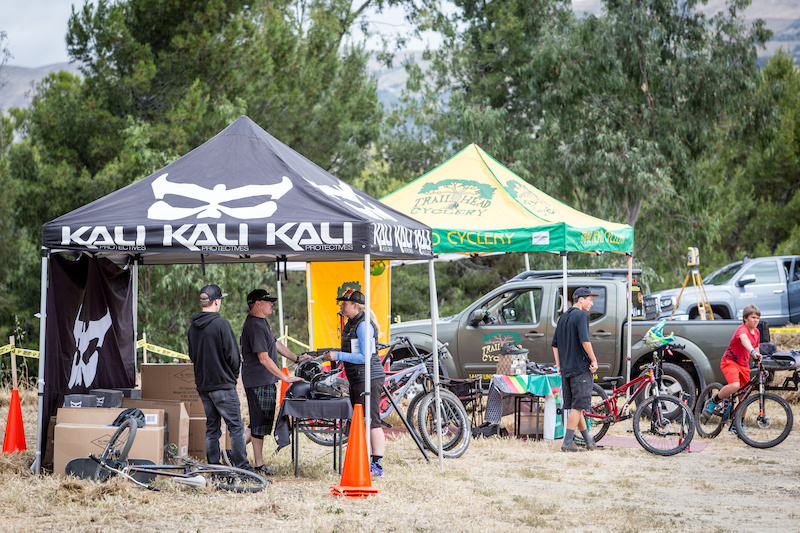 Kali Protectives is a local protectives brand from Morgan Hill, CA and has been very supportive of the project moving forward. Trail Head Cyclery has been involved from the get-go. Both companies were on hand to spread the stoke for the project and frame a photo of project supporters from all walks of life. 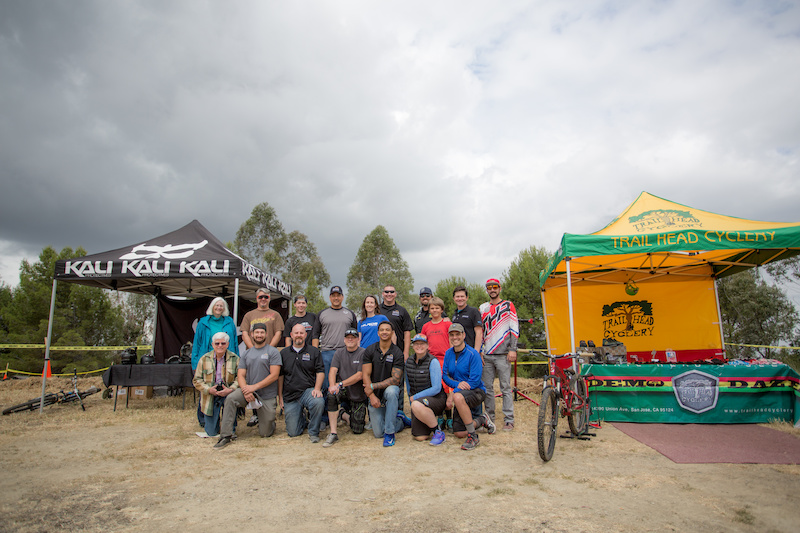 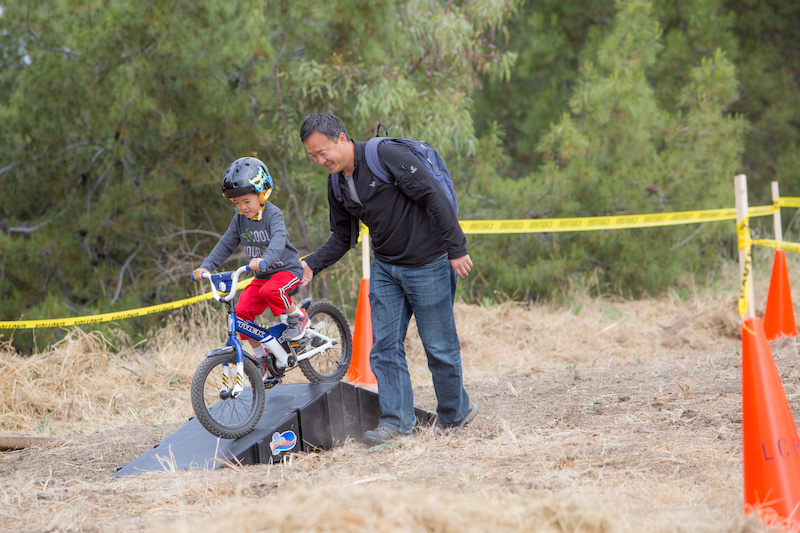 "Building Community Through Fun" is how the City of San Jose Department of PRNS serves its community. 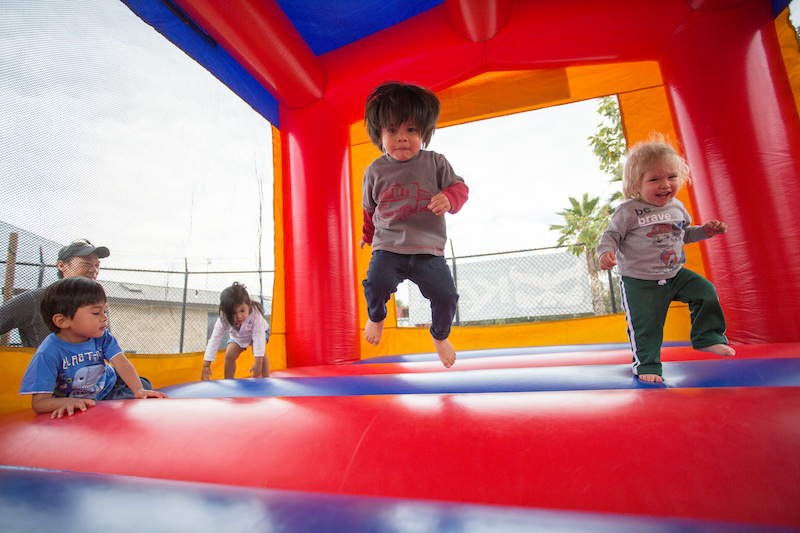 During the groundbreaking, families were encouraged to bring the whole family. Bounce houses and face painting for the little ones was a big hit. A seven-stop self-guided tour showcased the bike park's expansive footprint. 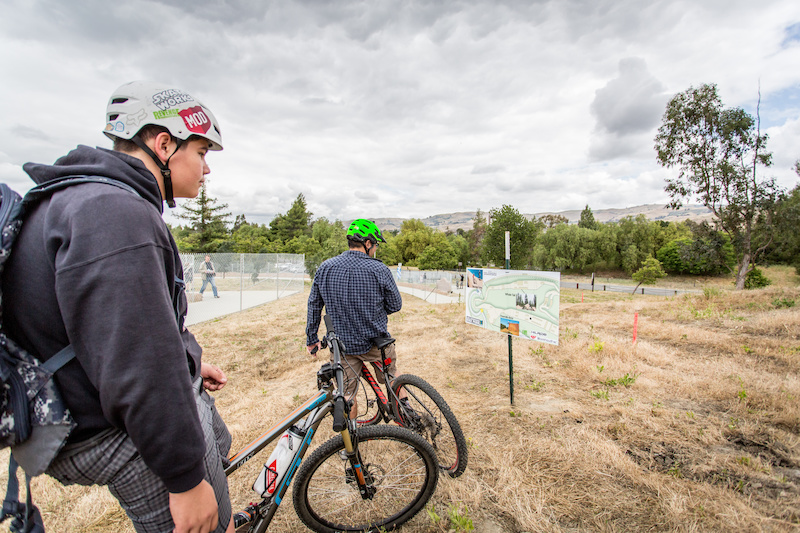 Victor Solanoy and his son, Myles, who are regulars at the skate park, drool over the tour sign for the Slopestyle Park. The Freeride Zone will feature several wood features from Progressive Bike Ramps including a Whale Tail and multiple Talladega wall rides over 30 feet long. 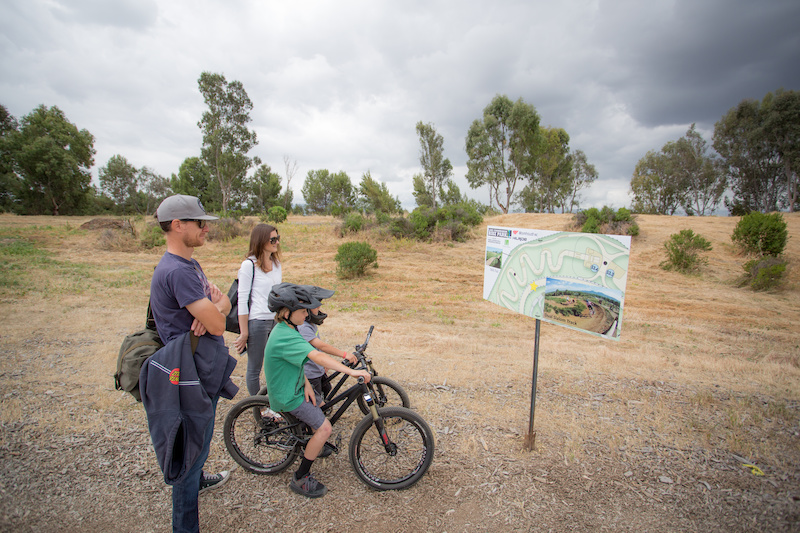 Dustin Vaughn-Luma, his wife Lindsay and their two boys, Luke, and Dominic took the tour of the plans for the upcoming bike park. Here they look at the Dual Slalom course. The City is planning on hosting a monthly race series for Dual Slalom and Pump Track, something the Vaughn-Luma's are excited about. 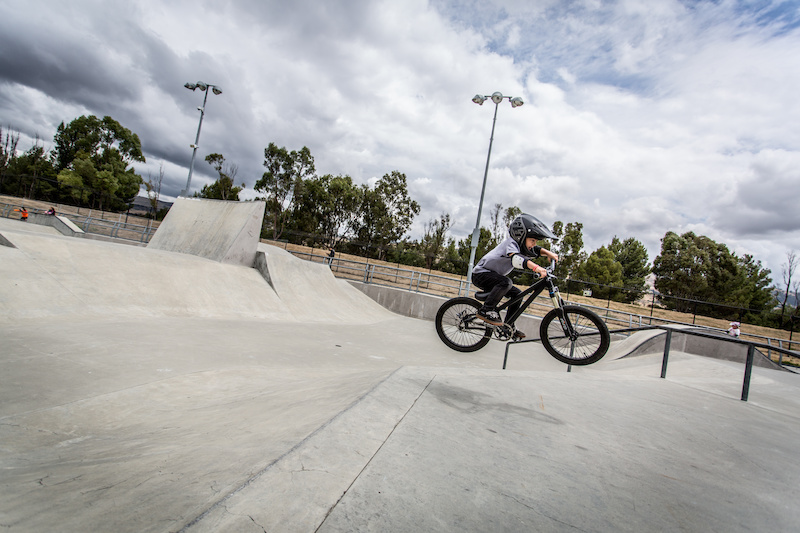 Both of the Vaughn-Luma kids already ride the park on their bmx bikes. Luke, only 7 years old, gets some air. The bigger kids wanted to hit the fun zone too. 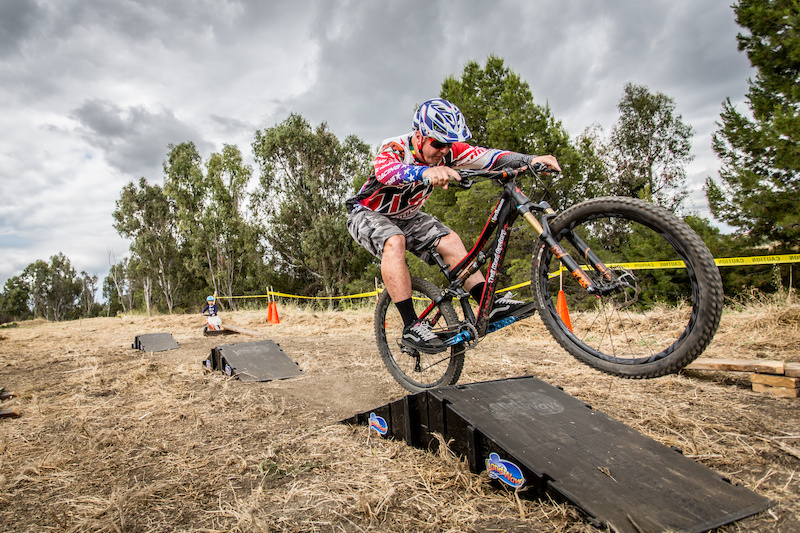 Shawne Portman, Trail Head Racing rider, pokes it out in the Fun Zone. 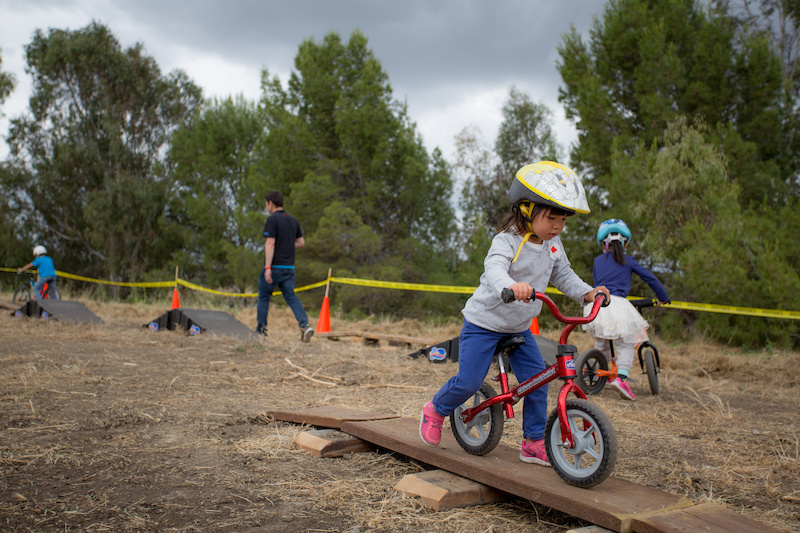 Even the little tykes on the push bikes were having a great time in the fun zone. 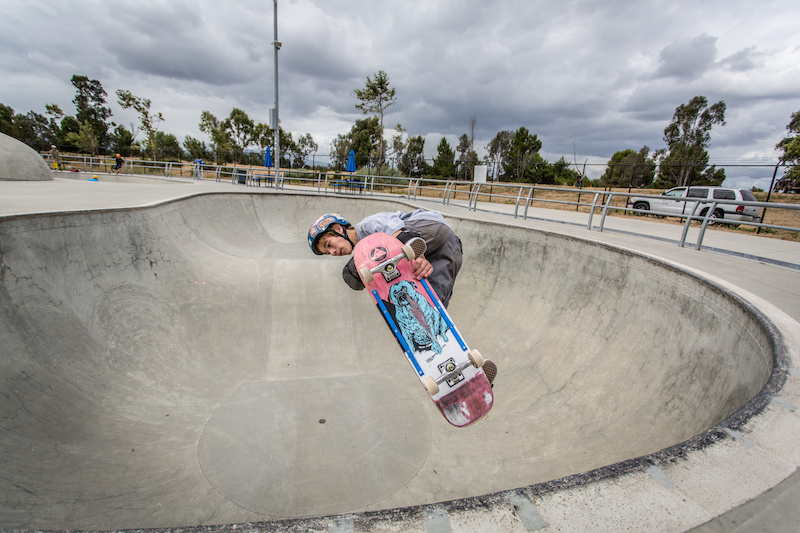 Alex Minton from San Jose is a 15-year-old shredder on a board. He sends it out of his favorite feature the Skull Bowl. 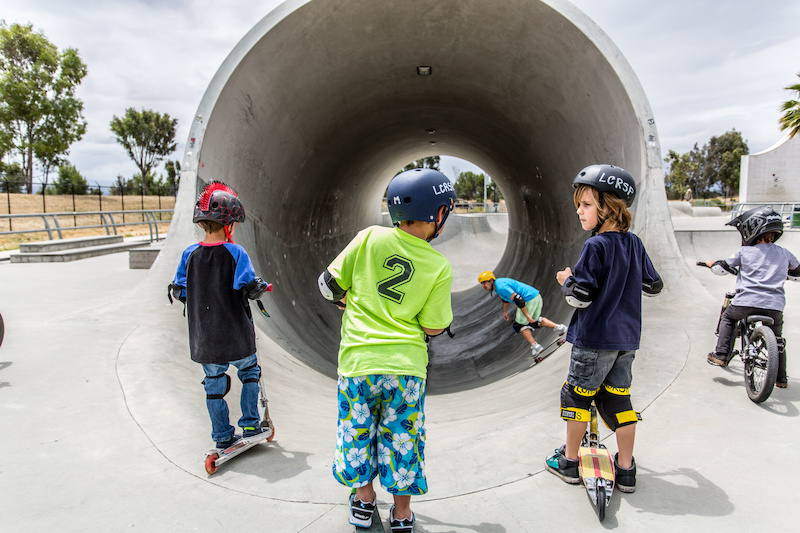 Little groms watch as a veteran skater rides the world's largest full pipe. Don't want to make the full investment into the sport yet? The LCRSP rents a full line of skate, scoot, bike and pads. 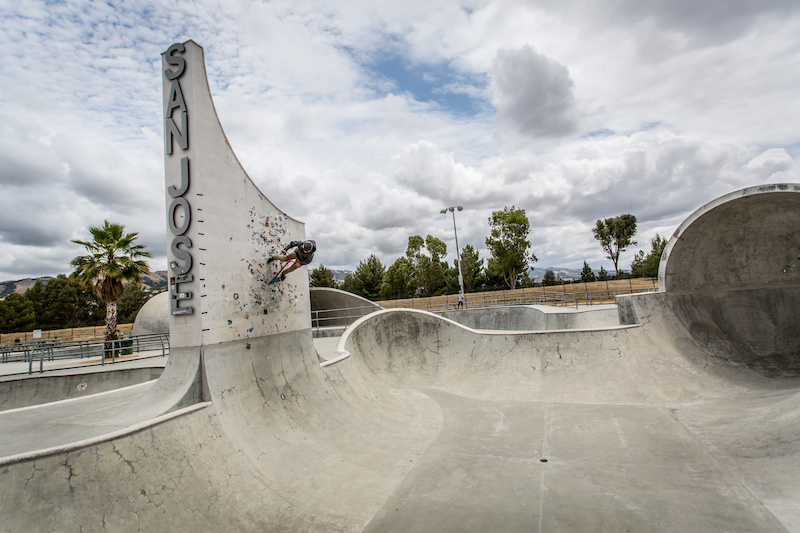 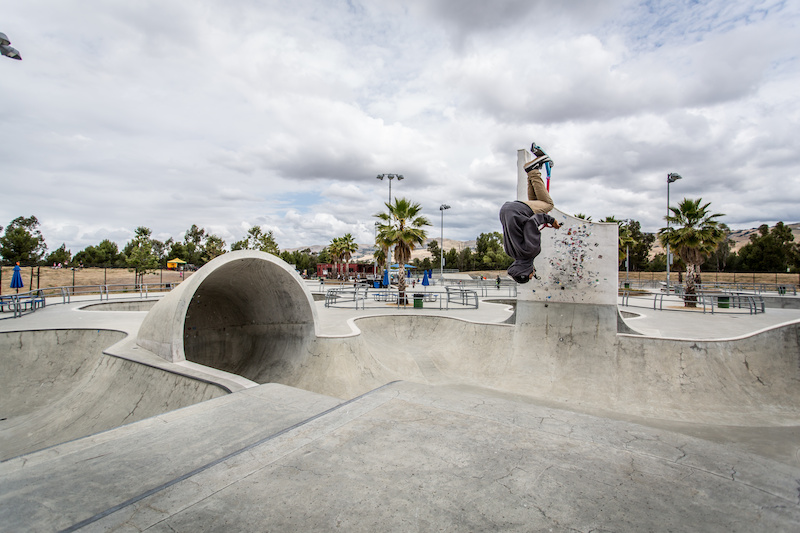 Cody and many others can't flipping wait for the bike park to open. 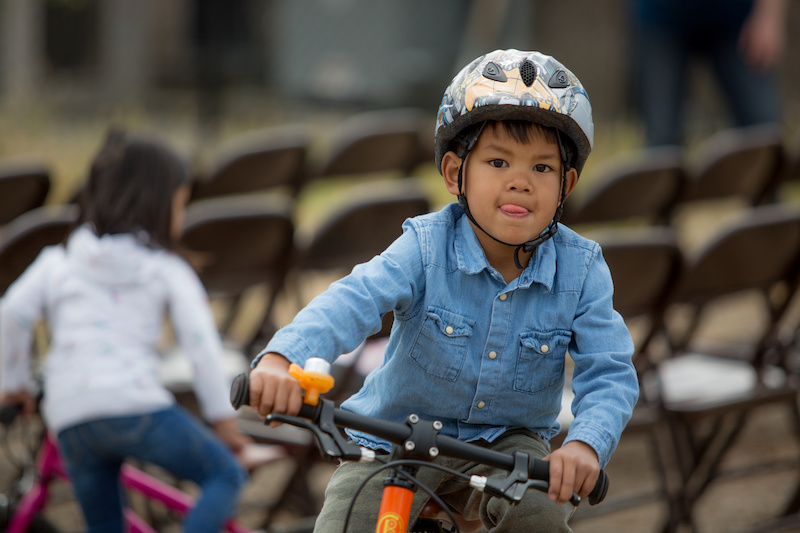 Full concentration with the tongue out is what it will take for this to come together by early 2017 and I'm excited to see it happen!

MikeSF77 (May 24, 2016 at 10:04)
HUGE THANK YOU to everyone involved with this, especially the Brad from Kali and Lars from Trailhead. Though San Jose is an hour drive from our home in the east bay, this will be huge for our family. What I wouldn't give to see a park like this get built in Concord/PH/Martinez though.... until that gets sorted, we just have to keep sending our business to the surrounding areas. Kali stoked so many kids at Sea Otter too with the helmet trade ins, props to them for being such a great advocate!

THCLars (May 24, 2016 at 19:52)
This is huge on so many levels... Super pumped to see all the stoke here! With so many supporters within an hour's drive, this place is going to be one fun place to hang out... Big thanks to all showing some THC love here. Smooches!

IsaacO (May 24, 2016 at 8:14)
Finalllly another real Bay Area bike park. Doesn't look like mclaren bike park is ever gonna open but I'll settle for an hour drive! Great news!

Here's a link to an old PB thread with course maps etc......

sunnycovemtb (May 24, 2016 at 14:00)
This is so great for kids and the local area around there, great for the sport, and great for bike businesses. Thank you so much to the city and to the sponsors, especially to Trail Head and Calmar, for supporting and bringing this project to life. Just so awesome. I will be out there with my daughter as soon as she's tall enough to reach the pedals :-)

JeffWeed Plus (May 25, 2016 at 10:15)
How awesome! Big thanks to both Kali and TrailHead!!! How cool that the owners of both companies made personal appearances at the event? That's rad- and speaks volumes about both companies as well! Support local businesses who support the sport!

kameraguy (May 24, 2016 at 18:22)
Literally down the street from me. Glad to see Lake Cunningham expand out to MTB related activities. Most of that land looked like a waste of space prior. And it's well supervised unlike Calabazas which would have it's share of seedy activities. This hopefully will mean a safe and inviting place for all to learn new skills and have fun on their bike.

mrgonzo (May 24, 2016 at 7:43)
They should totally have a stage of an enduro race through the"fun zone." Body armor is recommended.

bryan46 (May 24, 2016 at 9:02)
I remember cutting class or another to attend the first meeting years ago, and I'm so happy that things are finally rolling!