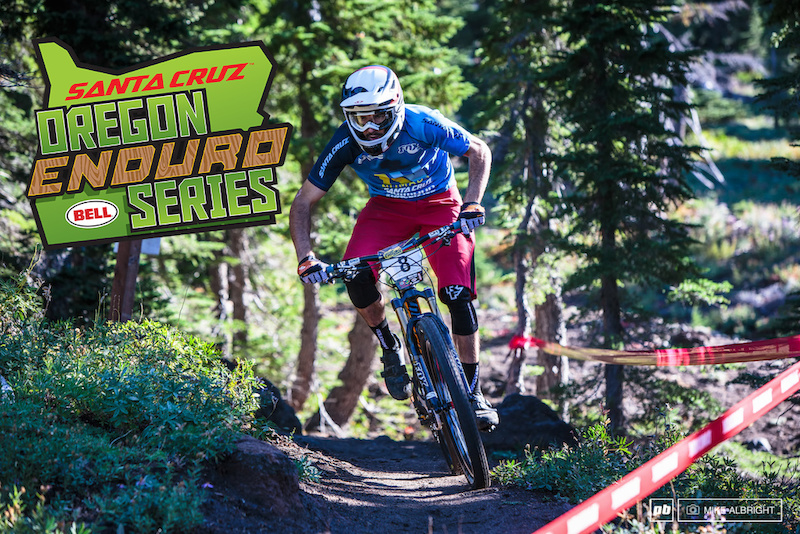 Santa Cruz Bicycles and Bell Helmets continue their long-term commitment to the Oregon Enduro Series by signing a two-year title sponsorship deal through 2014 and 2015. The two bike industry leaders agreed to share title sponsorship in order to raise the resources needed to keep the Series at the forefront of North American enduro racing.

Santa Cruz and Bell are also joined by presenting partners Shimano components and Kenda Tires for 2014. The Santa Cruz & Bell Oregon Enduro Series presented by Shimano & Kenda Tires (as it will be officially known) embarks on its third consecutive season, having pioneered the first enduro series in North America and helped create the North American Enduro Tour (NAET) four years ago. 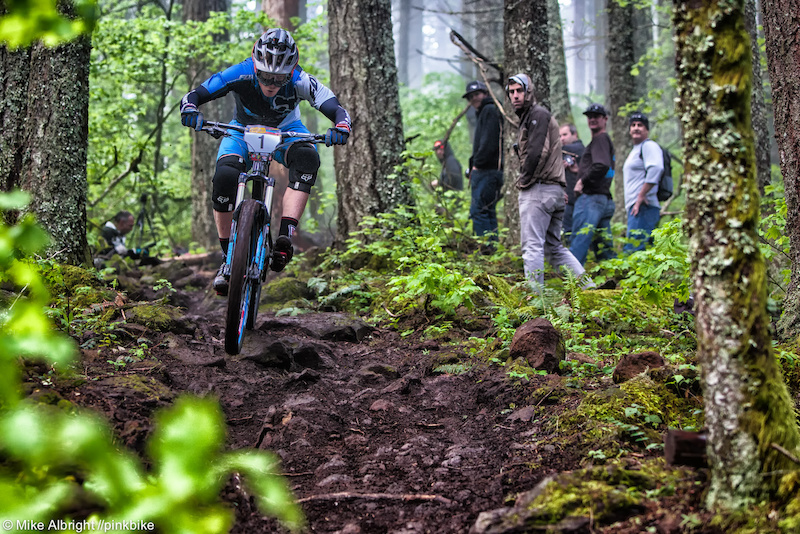 Since its creation, the Oregon Enduro Series has been sponsored by Santa Cruz Bicycles and the Series is proud to have the tradition carry on for at least another two years. Santa Cruz has been building progressive full-suspension mountain bikes since 1994. Santa Cruz Bicycles continue to rattle industry standards with designs such as their carbon VPP™ bikes and new Juliana brand for women. 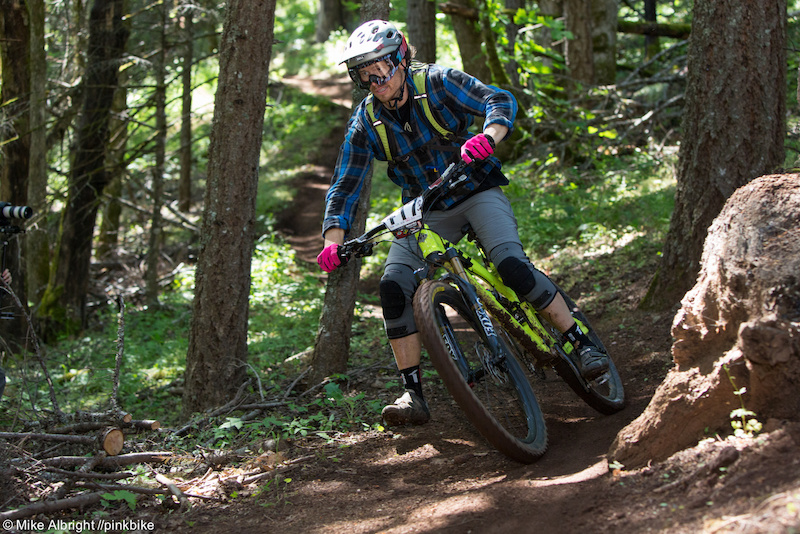 Participants will have the opportunity to win unrivaled amounts of Bell helmets and Santa Cruz bikes throughout the two-year partnership. With over $180,000 in cash and prizes to give out this year, everyone wins at the Oregon Enduro Series.

jserna69 (Mar 4, 2014 at 14:04)
The Original promoter of the Ashland Super D grew up in Ashland not California. The original promoter not only donates time and money to the Ashland trail organization but also to every trail organization where there is an Oregon Enduro Series event. In addition the OES created a special Team Challenge that donated thousands of dollars to the winning teams charity of choice. We understand that you all have a choice and that we may not be everything to everyone, however we have learned from our mistakes and we have taken great strides to improve the Oregon Enduro Series. Our goal once again, is to create a memorable event for all to enjoy... We welcome everyone to experience the camaraderie and excitement that the Oregon Enduro Series offers. Cheers!

SeaToad (Mar 4, 2014 at 16:26)
I will say that OES is hands down, evolving to be a stellar event. I've worked with these folks for Hood River Area Trail Stewards, as well as Hood River County Forest Department Trail Committee, to help OES create a community event. As part of the volunteer work I do, with events and outreach for HRATS, a non-profit IMBA sanctioned group, OES has been nothing but proactive in their involvement with putting on a race and reaching out to the community. From coming to pretty much all of our work parties, donating swag to work party raffles and movie fundraisers, they are nothing but gracious and truly want to be involved. Feedback is one thing, but complaining about complaining is another. Lets focus on the positive and move forward. I've had the pleasure to see this organization continue to grow...and with great passion and a true stoke to inspire all levels of racing. The female cats are spread out enough to invite all levels of racers and for this, I'm even more appreciative. Promoting women in mt. biking/racing, is something I feel OES does, as well as giveback. Anything I've reached out to OES crew on, for trail help, course clean up check ins etc. has been nothing but a team effort and proactive. Hood River is an amazing place to ride and OES appreciates and reciprocates. The bottom line is, OES has been extremely diligent with Hood River Area Trail Stewards, as well as Hood River County Forestry Trail Committee. I will continue to work with OES on all levels, from trail advocacy, outreach, work parties/events locally and beyond. And of course, myself and the mt. bike team I race on, will hands down...show up for the entire series. Outside of my playground, I cannot speak for other stops of the OES, but I can say, that in working for my local trails, I make sure to be involved in outside venues coming to town and in doing so, it always becomes a positive experience.

thuren (Mar 4, 2014 at 20:12)
I think the races this year are going to be more dialed myself. I can't imagine the coordination it takes to get all this gear out in the remote forest, timing set up, communication with no cell service, etc. Learning and improving takes time!

$95 bucks down the drain. Awesome.

"I think people are going to dig it," said Roussel, who took the race over in 2010 from Lyons.

POWsLAYER (Mar 4, 2014 at 14:49)
The 2013 AMC race was my first ever race and I gotta say, it was a hectic experience from the get go. I registered in Cat 1 Open Pro (which is actually not the pro cat, Elite is. Confusing right?) but my registration was "lost" so day of race, when i go to pick up my # plate, the registration manager looks at me like i have three heads and finally lets me pay and get my number plate. She says i am supposed to start after the last rider in my cat so i have a couple hours till i start. I head up to to catch my shuttle w/1.5 hours till my start time and the guys working the event tell me they aren't running another shuttle for another 45 mins and then there is a pedal up after that. They say i am going to miss my start time and "tough titty, we ain't movin" i keep getting hustled around like i am late for everything and come to find out, it's all because my number plate designates me as an "elite" rider (ie a pro) it was a negative experience all the way through waiting around forever for results and when they were posted, i wasn't anywhere to be found. I finally made my first complaint to the race crew that, having paid $80, i would at least like to know where I placed. about an hour later, someone finally tells me i got 7th. I knew i had a rough go on course that day but 7th out of 7 in Cat 1 seemed pretty bad. Turns out i got 7th in Elite but i didn't find that out for a couple of weeks after when a friend checked the results on obra's site. I am looking forward to the OES race run exclusively by the OES crew.

POWsLAYER (Mar 4, 2014 at 14:49)
I raced the rest of the OES races and while there were some kinks with timing and other logistics at the Camas race, Mt Hood went super smooth logistically, especially with two different venues over two days. It seems like they have gotten it together. I will be racing all of the OES races this season and really enjoyed the staff and production of the races in my first year of racing. For AMC to start a feed smearing OES and its Ashland OR raised Promoter seems childish and personal. It's riding bikes Bill, ease up. Everyone knows your the man in Ashland but i don't get why your so butt hurt about another event showcasing the sick riding y'all have down there.

Bleeder (Mar 3, 2014 at 22:00)
Cascadia cup all the way. I live in Oregon, but will be taking my $$, and my bike to Washington. For many reasons I won't get into on here. They (OES) could have had the best regional series in the country, but are throwing it all away. I hope they change their ways soon. But they lost my $$.

JDFF (Mar 4, 2014 at 11:09)
Having raced both Cascadia and Oregon Series, I too agree that my time and money is going to CDC (already has bought my season pass registration on Sat). Better courses, timing and organization with CDC. I do admit that I may do Oregon Series Sandy Ridge/Hood ala carte, because it is a fun course.

wsor1337 (Mar 3, 2014 at 21:22)
Really thinking about doing one of these again this year...
But are you guys going to sell sell extra raffle tickets to people again?
It's really annoying for those of us less well off to see a few people that spent $100 plus bucks on extra tickets walk away with all that swag you guys boast about...

wiscodh (Mar 3, 2014 at 21:40)
If you are on the fence about the oes Do the cascadia dirt cup and you will be more than pleased with the courses, organization, swag, vibe, and the non profit organizers.

GirlOutside (Mar 10, 2014 at 10:34)
While not perfect - these guys are always improving and moving in the right direction. I've always felt that the OES team is approachable and open for suggestions to make the participant experience a great one. In my past life, I've been involved in all levels of races from small community events like Boggs Mountain to unsanctioned illegal races to large scale events like Sea Otter, World Cup and the Northstar Series - so I've seen first-hand the logistics puzzle that putting on these events can become. I feel that Devon and his team really focus on improvement and learning from every race - and even from every stage. With all of the updates they will implement on from last year - I think this year will be a ton of fun and worth every penny. There isn't a line-up of race directors to come in and take the place of OES - so if we want to race, the athlete community needs to support these events...or they go away. It's a labor of love....they aren't making millions putting on this event and they give up their whole summer to make the OES happen. Hope to see you all out there this season - It'll be a good one!

chezotron (Mar 4, 2014 at 9:16)
No, Dan. The goggle/XC lid thing is a new trend. Goggles are fine on full face helmets with high speed but this is just ridiculous.
I don't even wear glasses when I'm riding. In the Northwet light changes too damn much.

POWsLAYER (Mar 4, 2014 at 19:04)
Maybe if you actually went fast enough you would see why sometimes its advantageous to wear goggles

gotshovel (Mar 4, 2014 at 22:37)
I always ride with goggles regardless of which helmet I brought. Why?
#1 the trails I ride are steep and fast. I often hit 35-40mph.
#2 I ride up so I can ride back down, and caring a full face on my camelback sucks.
#3 I wear contacts and used to loose them at speed wearing clear glasses. Never lost one wearing goggles. Not one.
#4 your opinion of how others look in a half shell and googles is fashion based and ignorant.
Rant over.

drivereight (Mar 5, 2014 at 0:56)
While you guys were ranting, I was out riding my bike. Good luck on a 40mph downhill crash on a half shell. I got 2 cracked full face carbon helmets to show for it.

konadan (Mar 4, 2014 at 8:07)
Ever shattered a pair of sunglasses or safety glasses while wearing them? Scary.

Its not a trend, its been done since helmets have existed and the mountains have been cold.

drivereight (Mar 4, 2014 at 11:12)
@konadan...no, I know of only single pane moto googles, dual panes are snow googles...even the best, they all fog if you don't clean them and reapply some anti fog treatment.

POWsLAYER (Mar 4, 2014 at 19:24)
just because you only know of single pane moto lenses doesnt mean they dont exist or are only "snow" goggles. true, any goggle will fog with out proper ventilation. In an enduro race, you typically moving fast enough to keep the lenses clear, even in the peddley sections of the timed stages, just take them off when you are transferring stages.