Join Pinkbike  Login
Since its introduction in 2005, the Blur LT has gone on to become our best selling bike. It’s a long-legged, lightweight but surprisingly durable workhorse that defies being lumped into any one category, and is at home everywhere from mellow XC terrain to the steepest and rockiest slices of the back of beyond.

Why then, if something is so popular, so tough, and so capable, would we go and scrap it for something new? Much as we love the old LT, not long after it hit the trails, we began to pick it apart to try and find ways of making it better. Now, after an exhaustive two years of intensive design and prototyping, we’re ready to unveil the next generation of Blur LT.Here are the Cliff Notes to the evolution:

*No other design can be manipulated to allow the degree of change in shock rates that VPP suspension can. With regard to the new LT, the shock rates have actually been mellowed out somewhat, for a more active early suspension feel and a more linear action toward bottom-out.

*Both upper and lower links have been totally redesigned. The alloy lower link has grease ports and intricate labyrinth seals to operate in a clean, quiet, contaminant-free environment. The upper link is now molded from carbon fiber and the shock mount is isolated from the pivot axles. Beefy 15mm diameter pivot axles bolt into the frame on one end, and feature trick collett-heads on the other end to lock them into the frame and eliminate any chance of loosening or slop. 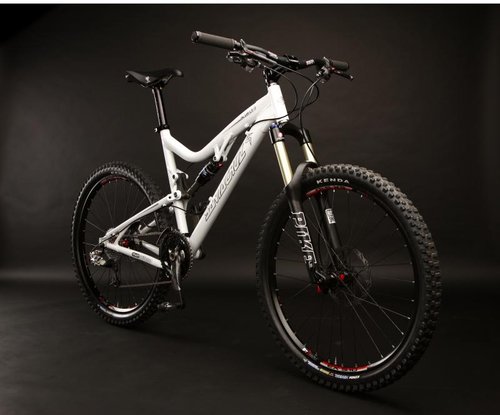 *Available mid-April, 2008, in the usual array of SCB powdercoat colors as well as anodized black and skidmark 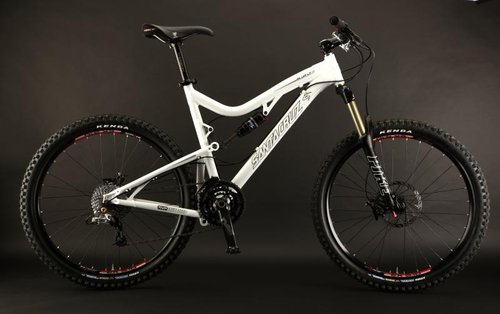 lehucker (Feb 26, 2008 at 8:06)
Harrlem when you're in your 30s, getting fat and your knees (and other body parts) are thrashed from DH and jumping...you'll be looking for something a little more lowkey stay in the sport. The fact that most bike manufacturers are concentrating their R&D on 5/6 inch travel all mountain bikes for XC and freeride should tell you something about how popular it is.

Haarlem (Feb 27, 2008 at 1:23) (Below Threshold)
most of my body parts are already thrashed how it is... doesnt make you stop because of an odd ache here and their!

Uzzihuck (Feb 26, 2008 at 8:30)
The bend looks sick!, through the old legs through and whoocha! sweet. I agree with lowering the top of the seat tube just a few inches. you can't run the top tube streight. it would end up in to top pivot!

Bikes are being made lighter because trail building is better nowadays! who needs 10" when you have a landing you could park a pickup truck on.

vpsriding (Feb 26, 2008 at 12:00)
(haarlem) i bet u have never even ridden xc before. i like dh more aswell but xc is still fun. and for every massive hill u clim, that means there is dh later. really nice lookin bike though

nateb (Feb 26, 2008 at 14:27)
Agree with everyone else about the seat collar being so high....who knows maybe this is an xl frame we are looking at, they always look goofier than the more common mediums..... anyway, my blur lt is sick, when it dies I will for sure get another one. Hope they only change them for the better though, cause there is nothing I dislike right now about mine.

crewsdawg (Feb 27, 2008 at 5:20)
I have friends who ride Blur LTs and I rode an Intense 5.5 for years (basically same bike)...awesome bike to say the least but the linkage WEARS OUT very quickly, meaning replacement. But guess what: Santa Cruz guarantees their bearings for life which means if you send in your old bearings and proof that you're the original frame owner, they'll send you new bearings for FREE! This bike has 140mm of rear travel, and is arguably the most efficient climbing XC/All Mtn rig out there, but its DEFINITELY NOT a bike you could take to Whistler. Trust me, you'd snap the linkage on your first run...I've watched my buddies do it on easier trails than A-Line.

crewsdawg (Feb 27, 2008 at 5:23)
Oh yeah, and Haarlem - we don't believe for a second that you're riding a freeride bike 52 miles. Know why? Because unless you clock several hours a week road riding or XC riding you won't have the fitness to do it! Downhilling doesn't build endurance buddy.

tgunn (Feb 27, 2008 at 9:31)
"Yep, just another xc-hybrid machine from the "losers" at Santa Cruz".....you mean losers like Steve Peat, Nathan Rennie, Greg Minaar and the man that started it all...Rob Roskopp....your the loser mate

Gout-Scout (Feb 27, 2008 at 12:39)
What I really meant to say is that Sam Hill should just quit DH as he is such a slug on a bike. Lopes and Krokop should retire, because they don't know what they're doing. Gracia should give up cycling and open a child day care center somewhere.Kovaric should just stick to scrabble and other board games.Get it? harharhar

keaton-george (Feb 27, 2008 at 17:07)
ya man i will hate santa cruz if they do the same with the new 4x it better stay the same because this new low bb and curvy crap is killing me

instigator (Feb 27, 2008 at 7:04)
why is it that i find out about new santa cruz models here, when im a dealer for them? They need to let us in on these secrets

cr8urban (Feb 27, 2008 at 13:16)
Soo true! My roommate just bought an lt from the shop that i work at, and I would have liked to tell him about this first! But my lt is perfect, and so it's hard to imagine this is that much better.

thrice (Feb 26, 2008 at 8:26)
So you can raise the seat, without having the frame break because of the leverage generated from the high seat, and low seat clamp.

Haarlem (Feb 26, 2008 at 6:49)
just luks like another dull xc bike tbh like, xc sucks theres no fun involved just hard work, i like fun... i love downhill and jumps, downhill trails especialy... i just hate xc... most boring thing to watch and take part in!!

zekedoobie (Feb 26, 2008 at 7:49)
I like DH and jumping too Haarlem, but there are a lot of people who dont and this bike would be awesome for xc all mountain. looks great.

pbdsolutions (Feb 26, 2008 at 9:08)
some people dont have amazing downhill tracks or jumps or whatever wherever they live so xc is just a good way of gettin out on your bike.

jazzboy (Feb 26, 2008 at 9:58)
this is the kind of creature that gets trails closed! remember, people that are bored are invariably boring!

Gout-Scout (Feb 26, 2008 at 16:54) (Below Threshold)
Yep, just another xc-hybrid machine from the "losers" at Santa Cruz. They should just shut it down now since they have absolutely no clue what they are doing. They have done jack squat for mountainbiking, especially for fr and dh, in the last ten years. Peaty, Rennie, and now Minaar, don't want to hurt any feelings at SC and are just toughing-out their purgatory there.

jazzboy (Feb 26, 2008 at 20:48)
Only one solution here....we must unleash Mark Weir upon the non-believers. I think they should put there money where their mouths are compete in the next Hell Ride. hahahahahaha....

Haarlem (Feb 27, 2008 at 1:21) (Below Threshold)
im not the kind of rider that loves to have a seat wedged in his ass for 4/5 th's of a trail... not mind kinda sport... would rather be freeriding, having my seat as far down as can be and only use it when im being a lazy git after a 26 mile treck and having a 5 minute sit down, so unless most of you intend on joining me on a nice 52 mile ride with youre free-ride bike i suggest you dont tell me how to live my life, i was merely putting out my opinion, not trying to warp minds into hating the sport, if people like skinny seats up their arse for hours on end thats their problem!