Join Pinkbike  Login
70 Comments
Santa Cruz used their 104 Bronson blog to take the covers off of their latest dream ride, a carbon fiber 29'er hardtail. Information is slim, but have a look inside to see more photos of their latest pony. 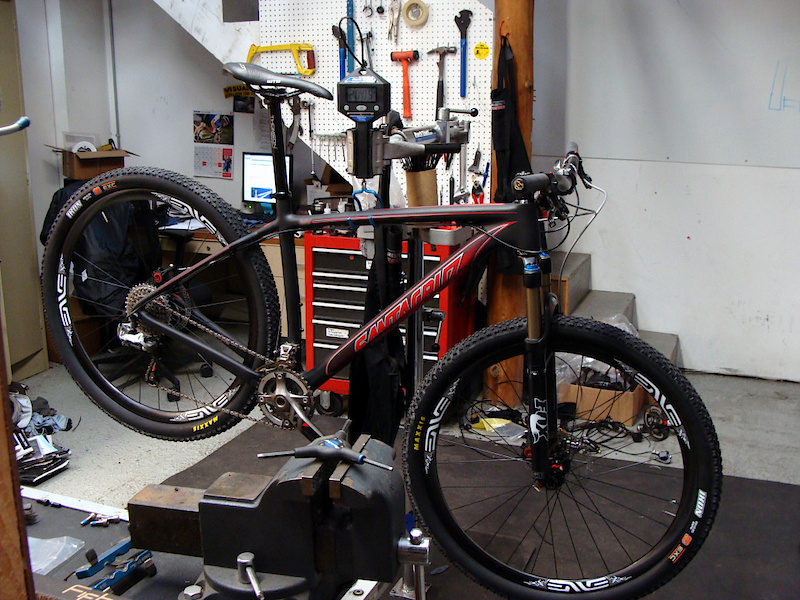 Let's hope that the matte finish makes it into production

While big travel steeds and All-Mountain sleds rule the roost around here, there's more to life than carbon downhill bikes and 6" travel All-Mountain machines for the majority of riders around the world. In a strong effort to keep the masses happy, Santa Cruz has let slip their latest wonder bike. Nope, there is no rear shock or clever suspension linkage. Yes, it does use carbon fiber and 29 inch wheels. And no, we don't know what they've decided to name it yet. The bike pictured comes to the fight weighing 20lbs 9oz, mega light for a big wheeler. The frame is undoubtedly featherweight, but it's also helped along by selection of SRAM's top tier XX group, a Fox F29RLC fork, and ENVE's carbon clincher wheelset. 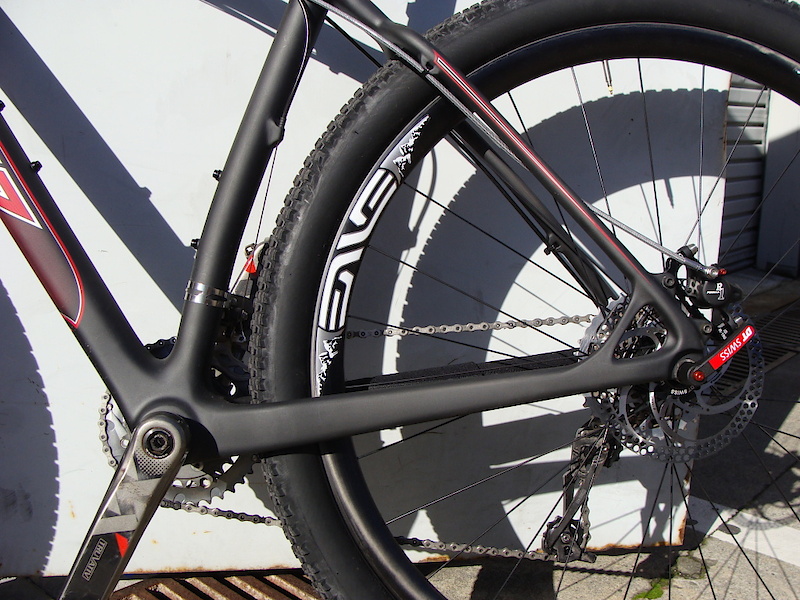 The unnamed bike looks to have short chainstays

The frame is said to use a tapered headtube up front and a standard threaded bottom bracket shell. Molded cable guides and stops, along with what looks like molded carbon International Standard brake mounts at the rear of the bike. No geometry numbers have been released at this point, but the bike looks to sport relatively short chainstays. It can be very cost prohibitive to change tooling for carbon frames so I'd expect the production bike to have very similar lines to this prototype version. Forecasted release date is said to be sometime this Spring.
At this point there are more questions than answers... Will it be single speed compatible? It's no doubt going to be light, but the weenies will want to know how light? How many Tallboy owners have printed out these photos and tacked them to the wall?

Hardtail 29'ers may not be your cup of tea, and if that's the case, take the hate elsewhere. For those who are stoked, let the guessing game begin below!

RobbyBriers (Jan 4, 2011 at 13:52)
It is. I'm pretty sure built like that it costs a fortune. Knowing Santa Cruz, the price of the frame only will be more than attractive.

Nothing2say (Jan 4, 2011 at 14:23)
Look at those lines...Can they PLEASE make a Carbon Jackal? Imagine, a Carbon DJ hardtail built to take on the abuse. Hell they have improved the strenght of the V10 by making its front triangle carbon. Go Santa Cruz! Make it and I will buy it!

Nothing2say (Jan 4, 2011 at 19:52)
I know they did! I was refering to the fact that they were able to make the Carbon V10 stronger than the older aluminium version. Knowing this, I was merely wishing they could make a JACKAL, the hardtail jump frame, using carbon.

seraph (Jan 4, 2011 at 21:15)
A carbon Jackal would cost way too much money for the average jumper, and I don't think that it would be able to hold up to the abuse of dirt jumping. The rear end on the V.10C is aluminum, and also sports 8-10 inches of travel, helping to soften the blow when casing a jump or landing a drop. A hard tail doesn't have this luxury.

Nothing2say (Jan 5, 2011 at 12:22)
The reason why the rear end of the V10 is Aluminum is to keep things snappy on the accelerations. I think carbon layered thick enough has the strenght to take big hits but also the flexibility to provide a confortable ride . THe problem I see with carbon is it is subject to failure upon impact...That could be fixed i guess. However I completely agree about the price and I only put it on here because I think carbon frame are very flowy and look the part. Maybe in the future, Carbon costs will go down and be as affordable as Aluminium or steel.

Nothing2say (Jan 5, 2011 at 12:24)
Btw Seprah, not hating or picking a e-fight so I hope I did not sound too upfront or stupidly agressive in my previous post. Also your Jackal looks the bomb.

seraph (Jan 5, 2011 at 12:37)
No worries. I agree with you that carbon has a great feel, but I maintain that it wouldn't be able to hold up the kind of abuse that dirt jumpers subject their bikes to. The thing that makes cheap dirt jump frames great is that when they do get damaged, it doesn't cost an arm and a leg to replace them.

layflow26 (Jan 6, 2011 at 20:52)
whats with 29ers. I've ridden them and nothing special, poor turning radius.silly just another way to be different. whats next a 29er single speed...oh wait already be done. gay

Stampers (Jan 4, 2011 at 16:57)
It sure does look like a blazin fast fun ride. I'd love to have one in my stable as a trail/road rocket alternative to the dually.

iamamodel (Jan 4, 2011 at 18:26)
I would be SO surprised if it came out with Enve rims - they are just so expensive that it would turn many people away. It could be in the 'top' build kit, but that would be one hell of an expensive kit. Gotta hand it to the graphic designer that, firstly, made the word 'Edge' read upside down and then, changed it the letters to 'Enve' and at first glance looks like their has been no change at all.

bplatte (Jan 4, 2011 at 20:04)
With Niner making the WFO and Banshee potentially making a long travel full suspension 29r, a tall boy LT would not surprise me.

RobbyBriers (Jan 4, 2011 at 15:54)
As your names suggests, you are not familiar with Santa Cruz, Mr. savage. After a bike like the Nomad Carbon, that makes the Cannondale Jekyll blush, I'm pretty sure this frame will be awesome. And pay for the logo? Even if it would be a cheap ass Taiwanese frame, you'd pay for good customer service, warranty and looks. But you're wrong, since Santa Cruz offers very good price/quality frames

wa2wider (Jan 4, 2011 at 16:11)
Agreed! A few years ago I called my local (500kms away) SC dealer about purchasing new bushings and linkage parts for a newly purchased Heckler. They told me I would have wait until they put out a bulk order, would not take a Visa # over the phone and would require local pick up of parts... again local beings (500kms). When those parts finally arrived I had a friend pick them up. Anyway, wrong parts. I called SC directly with this issue and within days had the correct parts in hand! Customer service done right. I'm currently looking at replacing a frame in my fleet of bikes and its either going to be a Tall Boy, Blur XC or perhaps one of these steeds. Nice ride and great customer service...

megabyte (Jan 4, 2011 at 18:04)
I'm a little confused. What's wrong with Taiwanese frames? In actuality, most bikes are made in Taiwan, however most carbon stuff is made in China (much cheaper labour etc.) rather than Taiwan, including the Jekyll. Wouldn't be surprised if this was made in China too, and no, that's not a bad thing at all.

But yeah, many companies have their carbon frames made in China, like Ibis.

scottvt (Jan 4, 2011 at 19:12)
Looks like a great bike. And I also agree about their customer service. I bought a used Nomad frame that was missing the head tube badge. I was going to purchase one for $10 off there website, but the checkout deal was screwed up. So I called SC on the phone explained the situation, and even with them knowing I bought the frame used, sent me the $10 item for free, I didnt even have to pay for shipping, and it was here fast. So despite there higher price tags, I will strongly consider Santa Cruz first for all future bike purchases.

lilwalters (Jan 4, 2011 at 19:24)
why is it that everyone knocks offshore manufacturing? If you ask me, those that knock it, are just showing the public how naive and uneducated they really are... offshore manufacturing is in most respects superior to domestic manufacturing... yes, labour is less expensive in most cases, but you're more likely to have skilled workers as they're often not unionized overseas... workers ACTUALLY have to work (and work well i might add) to keep their jobs... and if they suck at it, there's like a billion other people lined up to take over... Unions have killed domestic manufacturing because half-wit workers can sit on their ass, screw around, and know their job is protected...

benshreds (Jan 5, 2011 at 21:18)
@RobbyBriers
The Carbon Nomad is sick, but that new Carbon Jekyll is going to be even sicker. The Jekyll has some things that the Nomad does not have. First, BallisTec carbon used for armoring tanks in the Japanese army is used in the frame. That's not just any carbon. Its used in baseball bats and armoring, so its ultra dent proof. Second is the new Fox DYAD RT2 shock that's two in one with totally separate air pressures, compressions, and rebounds. I loved riding the Nomad, but I'm stoked to get on a Jekyll.

I love what you said lilwalters, so right on!

RobbyBriers (Jan 4, 2011 at 15:50)
That last pound is all in the legs and in the mind rather than off the bike... Who cares anyways? Weight weenies have nothing to say because they don't know what a stiff bike is, all they care about is having the lightest bike ever.