Kurt Adams, the only Canadian man to compete in the fifth edition of the Santa Cruz Hell Ride in California, returned to Fernie with the winner's title and a brand new Santa Cruz Nomad bicycle valued at over $5,500. Considered by many bike riders as one of the toughest mountain bike races around, this year's Hell Ride featured 4,420 meters of climbing and a total of 106 kilometers of riding."It is definitely the most difficult hell ride we’ve ever put on in terms of course," said [L=http://www.santacruzmtb.com/home/]Santa Cruz’s[/L] Mike Ferrentino. "It was brutal." The race was held in Downieville, California, on a loose rocky and dusty trail on August 2, a very hot day. The eight contestants started the race at 7 a.m., an hour ahead of the two professional mountain bikers, Mike Weir and Rachel, who were chasing them. With a time of 10 hours and 45 minutes on the trail, Adams was one of only four contestants to finish the course.

"I walked some downhill stuff for sure, some of it was pretty tough," said Adams adding that the terrain was not comparable to any trails in Fernie. Although Adams did not beat Weir on the trail (Weir finished the course in eight hours and 24 minutes), he was the only one to beat Weir on paper after the time bonuses were taken into account.

"It’s hard to explain, because there were no rules," said Adams. "As the weekend went on, things were constantly changing." In order to give the competitors a little bit more hope to win the Hell Ride, a series of fun competitions were organized. From holding their breath under cold water to riding a circus bike, participants were given a chance to gain bonuses time. However, Ferrentino still believes that the Fernie carpenter did well. 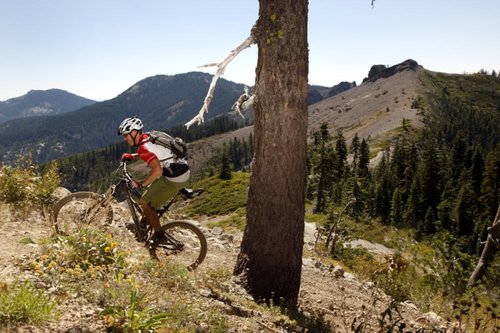 "He rode a phenomenally long, hard ride at a very good pace that most expert level mountain bike racers would be really happy to sustain," he said.

According to Ferrentino, the last two winners of the Hell Ride ended up being sponsored for endurance races. "They didn’t necessary do that well," he said. "In fact, I think that they probably would have done worse than Kurt did." For Adams, the Hell Ride experience was "a sweet weekend away", which allowed him to discover a new side of riding. "There are tons of people in town that could do this," said Adams who believes that Fernie has some of the best riding and is home of many strong riders.

And as Ferrentino said, "We could put on a Hell Ride in Fernie, you have all the ingredients."

Congrats to Kurt Adams from Fernie for doing so well in the Santa Cruz Hell Ride.

Also, Thanks to Wyldebill for tracking down this story.

marleyjoeb (Aug 22, 2008 at 16:50)
Kurt is a cool guy - I was there and watched him ride.s uper tough trail, ultra beautiful - nice people, mostly...it was like a college frat house with the santa cruz guys - they got me wasted on tequilla and then hazed me out of their club - i was not supposed to be there i guess, my wife was competing - the new nomad is by far the sickest bike i have ridden - joeb

stephbowcycle (Aug 22, 2008 at 13:05)
Sweet, I'm driving to Fernie in 5 hours... if I can track this guy down I'll definitely shake his hand and congratulate him. That's so awesome! What a trooper.

dirtbagluvin (Aug 22, 2008 at 15:37)
Walked downhill? WTF?!!!!!!!!!! D Huck should have been a finalist....he would have CRUSHED those trails seeing as he used to live there....too bad the finalists are judged by a popularity contest. Huck just got off the Colorado Trl (Denver to Durango) and would have been in prime shape to give Mark his most fierce competition yet....nice job to all anyways...Downieville is fo real.

martins (Aug 22, 2008 at 20:58)
My guess is that Kurt was pretty tired, he is a very good DHer too as well as a very strong rider, I was surprised to read that quote though. I'll ask him tomorrow morning to see if it is correct... Mark Weir apparently said Kurt was his toughest competition yet.