Oh, no, not another bike from Santa Cruz...

Following in the footsteps of the Blur LT's redesign earlier this year, the Nomad is the latest recipient of SCB's next generation VPP.The Cliff Notes for this redesign are as follows:

The "why" of this requires a little more explanation:

The VPP revision results in a flatter shock rate, meaning a less dramatic falling rate at the beginning of travel, and less of a rising rate near bottom-out. The instant center of the rear suspension now sits lower than before, and the new design has less chain growth than the old one. These elements make the new bike pedal and climb more efficiently than before. The geometry of the bike still ensures excellent stability, but the suspension feels more lively and the new Nomad feels more snappy and responsive everywhere.

The new linkage design features 15mm diameter alloy axles bolting directly into the frame that are locked in place with ultra-trick collet heads. These control preload on the angular contact bearings in the lower link, which are in turn easily lubed up via the grease ports in the link. Each frame comes with a grease gun. 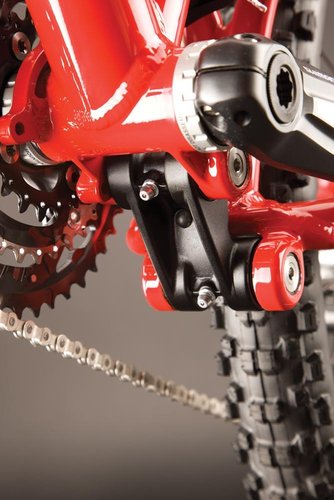 The upper link is molded carbon fiber. These changes result in vastly improved weather resistance, longer intervals between servicing, much easier user serviceability (lower link can be removed without having to take the cranks off), and improved chassis rigidity. 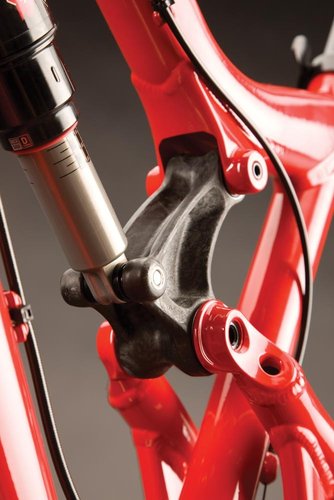 Changing from the old clamshell welded top tube design to a triple butted 6000 series aluminum front triangle allowed the engineers to increase strength and stiffness in the front end, incorporate ISCG 05 chainguide mounts and increase head tube diameter to 1.5", yet at the same time reduce frame weight by a third of a pound over the previous model. Frame weight for a large size powder coated Nomad running a RockShox Monarch 3.3 is 6.9 pounds. Smaller frames will weigh less, as will anodized frames. 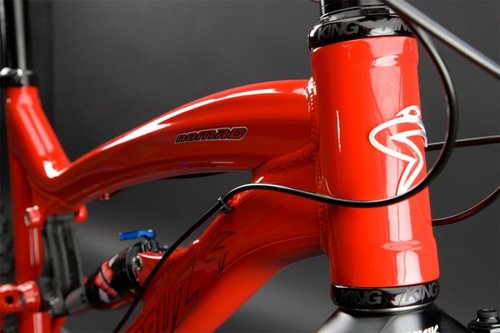 The old Nomad defied easy categorization. It spanned the gap between heavy duty long travel trail riding and aggressive terrain high performance abuse and found friends at either end of the spectrum. This redesign muddies attempts to pigeonhole the bike even further.
It's lighter and more responsive, but at the same time stronger and more stable. The territory that the Nomad calls home has grown in size.

Available late October, in the following colors - black, white, red, yellow, lime green, liquid blue, ano green and ano slate. The new Nomad will be shown at both Eurobike and Interbike, and there will be a whole raft of them available for test rides at the Interbike On- Dirt demo. 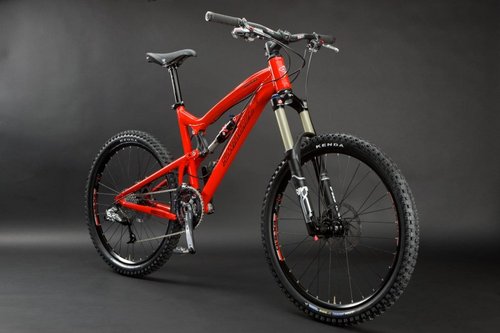 epicbiker (Jul 14, 2008 at 18:56)
looks like santa cruz has done it again. theyve taken a killer bike and made it just that much better. cant wait to see what they do with the vp-free

shawncd (Jul 14, 2008 at 19:04)
Looks good, but I would think maybe the grease nipples seem a bit exposed to possible damage both from mud,water etc as well as impact?

c0-w (Jul 14, 2008 at 21:07)
Haha that sucks mattdawg... I bought a Heckler just before Santa Cruz came out with a build kit that had basically my same spec only cheaper... That seems to be the way things go with Santa Cruz :p

xltrider (Jul 14, 2008 at 22:25)
hahaha specialized tries so hard to make their bikes super curvy and SC goes in the complete opposite direction...and pulls it off in a spectacularly graceful way.

Lonch-man (Jul 15, 2008 at 19:57)
ya I see what you mean xltrider. the very first time I saw a specialized demo i was like what the fuck is that its ugly as hell. specialized is still tight but santacruz owns. V10 nomad and jackle are all sick but dont try and look to hard core. this new one is the shit I like it.

This thing looks amazing too.

nateb (Jul 14, 2008 at 19:32)
Yah this bike looks awesome, if it's as strong as the last Nomads then this thing looks way better, like this new thinner looking frame design over the last beefier one.

LukeLikesBikes (Jul 15, 2008 at 14:42)
my view on the Santa Cruz producing a bike overseas is that it kinda kills the "soul" of a santa cruz. You ever seen the lil tickets they come with with the welders signature on them. The man/woman who spent their time hand welding your frame takes pride in their work to send you an autographed certificate of authenticity, I dunno about some of you guys but, that makes me proud to ride a santa cruz, and shit I dont even own one, 2 of my buddies do...

fatcatdj (Jul 14, 2008 at 20:16)
Good looking bike, the grease fittings look like they will get shit all over them but at least theyre there for servicing, better than not having them. The slick hydroformed tubes look like the NOMAD may be made in Taiwan now. Oh well, I guess Santa Cruz found it cheaper to get it made there. NOT like our canadian friends who still made Rocky Mountain and Cove in canuck-land.

Lonch-man (Jul 15, 2008 at 20:07)
theyve already got the nomad jackle and possibly v10 being made in portland OR. Its kinda cool cause all the cool bike shops all have a ton of santacruz. p-town is my home so its awsome.

GreatBritton (Jul 15, 2008 at 10:00)
the bike looks amazing....I really wish Santa Cruz would start using some of their paint-job skills similar to there race and team bikes on standard production.....even in limited numbers would be great. I'm a little bored with plain frames (even though this nomad pops).

norcosrule27 (Jul 15, 2008 at 17:04)
i don't know, i ride my bike every day(vpfree) and i don't need to maintain it that much, it's just the average stuff like cleaning the chain, cleaning seals and such. Never have had a problem with the pivots or anything, and no problems at all with them painting into the threads so parts don't fit properly. I think you just don't wash your bike maybe, or store it properly, it's been 2 years and no problems with pivots yet. I live in a very dry place too which might help to keep moistuer out, but dust is EVERYWHERE! in my opinion, compared to other bikes, santacruz are the shit.

Pitcrew (Jul 14, 2008 at 19:40)
Just my opinion, but it looks more XC now. I understand their using stronger metals, new designs, but for me having something a little thicker and beefy under me gives me a lil more confedence. IMHO.

norcosrule27 (Jul 14, 2008 at 20:38)
I thought it was supposed to be the vpfree coming out first, i had no idea they were working on the nomad too. It's crazy what they are doing, their bikes are amazing as is and they are making them that much better. I think they have big changes in the vpfree because the stopped the production completely this year.

lionfish (Jul 14, 2008 at 23:44)
What's wrong about a bike/frame made in Taiwan. Can you really tell where the bike was made if no one told you? Are you really want to pay additional $1K to get the same bike made in North America?

LukeLikesBikes (Jul 14, 2008 at 20:24)
Yea but Rocky is manufacturing their flatline in Taiwan now, son. Didnt you read about that? New frame looks sick can't wait to see the new V-8 VP- free incarnation.

fatcatdj (Jul 14, 2008 at 20:28)
Rocky Mountain is in taiwan now? Ok...damn! is COVE still made in Canada? I also hear some buzz about Intense moving operations in taiwan because easton is moving there as well.

norcosrule27 (Jul 14, 2008 at 20:36)
okay, so what's wrong with it being made in taiwan?? i'm sure it will be just as good, and cheaper for them to make it there. They probably won't sell them any cheaper though which is plain retarded. I think bike prices will rise too, about 20% i heard, because of the oil price, it effects almost everything for bikes.

bigburd (Jul 15, 2008 at 5:40)
There is nothing wrong with bikes made in Taiwan , Taiwan and the whole of the far east LEAD the way in maufacturing and producion of many many products and they can do it cheaper and faster and to higher tolerances

diz-or-die (Jul 15, 2008 at 10:37) (Below Threshold)
so when you crack your head open because a "made in taiwan" frame breaks, are you going to go to the cheapest fastest doctor to get your brain fixed? i doubt it!

maybe just me, but i want a bike that i know someone took their time on and ensured quality instead of quantity.

quantity, thats all it is to the companies who have their bikes made over there; cheaper + faster = Quantity = more profit. at least if its a taiwan frame make the bike more affordable

mini-dub (Jul 14, 2008 at 21:13)
well tits, i just bought an 08 nomad a few months ago. this changes look pretty sweet though, especially the ISCG mount. but it's ok because i still absolutely love my nomad

nouser (Jul 16, 2008 at 17:02)
flag LukeLikesBikes (1 days ago) (Below Threshold) show comment
I really hope this new Nomad is still handmade over here

sticker on the seat tube says: MADE IN USA ---

does that mean it's made in Chiawan? hope not

bolini (Jul 15, 2008 at 16:04)
Between the creaking pivots, the torsional sloppiness and the paint overspray that makes the hardware fit poorly, I think Santa Cruz is way overrated. My VP Free was weak and needed more maintenance than any other bike I have owned - same with my other VP Free buds, plus anyone I know with a V10. At least they are starting to improve their leverage ratio profiles. I guess looking curvy seems to be more important than actually performing well.

when this one cracks, I think I'll get a Nomad

mini-dub (Jul 16, 2008 at 10:04)
for climbing and trail riding it's much better due to the vpp suspension. the bullit is only single pivot. for freeride/dh ill assume the nomad is still better because it's a newer design, but the bullit has been around a lot longer and refined quite a bit. for sure if you ever want to pedal up anything get the nomad.

DyerRoad (Jul 15, 2008 at 9:30)
nomads climb like shit and creak like crazy. The pivots need to be rebuilt every couple of months and its a pain. A bunch of guys on the local trails have switched their nomads out for GT sanctions and couldnt be happier

xs11 (Aug 28, 2008 at 9:03)
Nomads don't climb exceptionally well because their wheelbase is long and the head is slack. Using a Talas fork and lowering it helps a little but is still not a cure. All that makes you climb harder but it all goes away when you descend stuff you wouldn't even dream of with a "good climbing" bike. My friends ride Ellsworth, Specialized, GT, etc, and we all spent at least 35K on our bikes. I got my Nomad with FOX 36 up front and the air rear (shouldâ€™ve gone coil...). But, time after time I can make the descent without the biffs or walkarounds that my friends endure. It amazes me when I get to the bottom of what I thought was an easy down and the rest of the group is struggling, kinda like I do on the climbs. I'll trade my Nomad for a new one any day. Oh, and I keep my pivots lubed and torqued every six months and there are no problems. I also take my wheels in to be trued. It's called maintenance.

emarciniak (Jul 16, 2008 at 0:06)
I like how buddy is getting negative props for voicing his personal opinion.