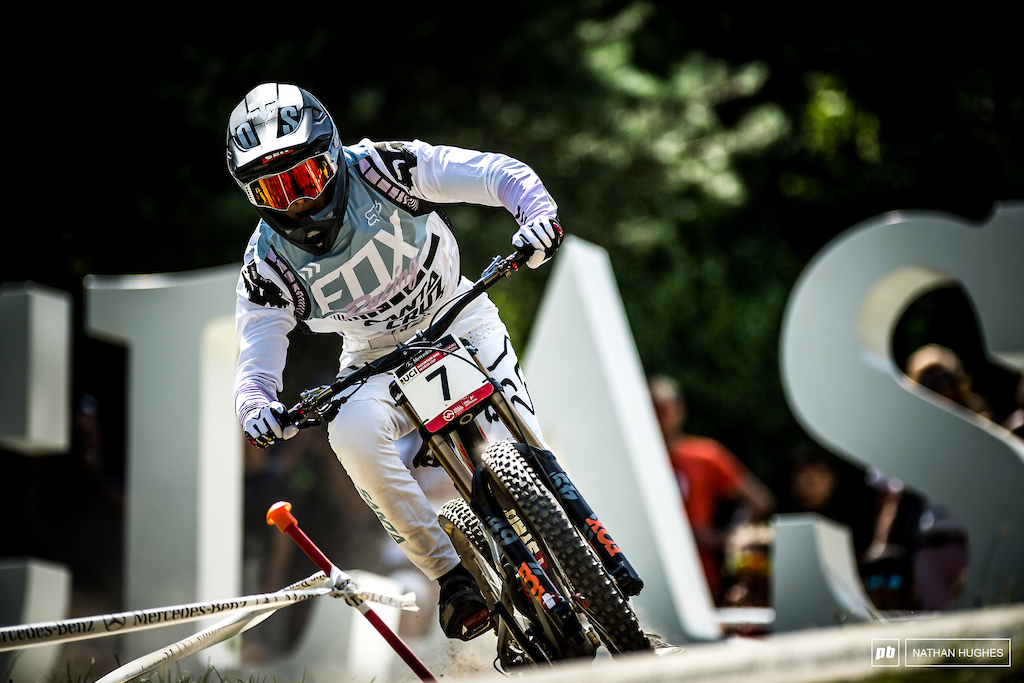 The Syndicate has announced Burgtec, N12 technologies and Silverstone Paint Technologies as new sponsors for the 2019 season.

Now officially joining the team for the 2019 season, the component company that calls Macclesfield home will be supplying the Syndicate with bars, stems and seatposts while also co-developing new grips with Greg Minnaar and Loris Vergier throughout the season. Burgtec parts have been fitted to Syndicate bikes for years but the partnership becomes official for 2019.

We spotted Greg's signature grip and prototype Syndicate DH bars at the Burgtec house show back in January, check them out here.

N12, based out of Massachusetts, USA, currently deliver the composites to Santa Cruz's engineers that allow them to create high performing Reserve Wheels. Their involvement with the Syndicate is a little hush hush at this time, keep checking Pinkbike to find out more.

The UK company behind many of the paint jobs found on the F1 circuit will be using the latest materials and finishing techniques to provide custom painting for the Syndicate's V10s. This will save weight and make the bikes "look F1 fast". 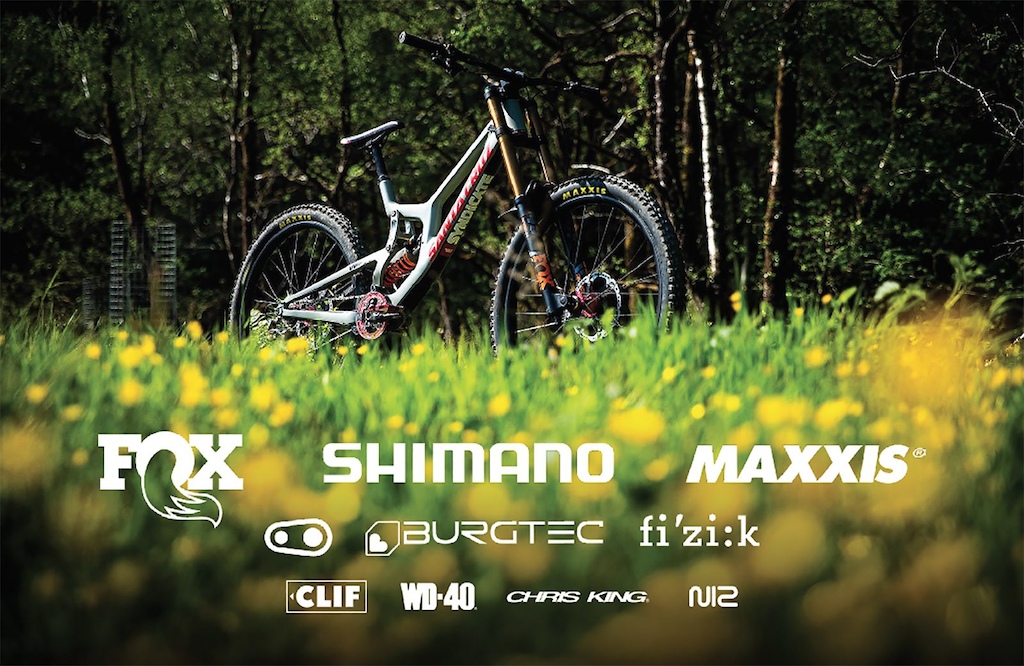 Greg Minnaar, Luca Shaw and Loris Vergier will all be returning for the next season and Steve Peat will be head coach. Check out footage of him chasing down Loris while testing in Portugal here. Kathy Sessler and mechanics Doug Hatfield, Jason Marsh and PA Roche will continue their work with the team.

Santa Cruz Syndicate return to the campaign trail for 2019 with Greg Minnaar (RSA), Luca Shaw (USA) and Loris Vergier (FRA) all voting Remain, while Steve Peat (GBR) is appointed Head Coach and Speaker of the House.

“We break down walls, not build them” explains Rob Roskopp, Team Director come President. “Despite such a well known group of riders, our policy is to keep the team as relatable as we can. It’s the motivation behind doing the web series, and the reason our approach to pit set-up is more privateer than private party. First testing for 2019 starts next week and I’m already getting revved up about the season. With the World Cup returning to the Les Gets / Morzine area and the Worlds in Mont Sainte Anne, it’s shaping up to be one of those classic years.”

Burgtec have officially joined the party now too, and will deliver bars, stems and seatposts in whatever myriad of sizes Greg is convinced he needs. They will also be co-developing grips with Minnaar and Vergier as the season unfolds.

Crank Brothers continue to ensure the riders keep their mettle to the pedals in all conditions and fi'zi:k has their back with a series of custom saddles.

Chris King deliver their touch of precision to hubs, headsets and espressos while Clif handles nutritional duties once again. And in the background, WD-40 will ensure everything’s running slicker than a Russian Facebook campaign

Two of the newest developments in camp Syndicate are the arrival of N12 Technologies and Silverstone Paint Technologies.

N12 Technologies, based out of Massachusetts USA, deliver advanced nanomaterials to our composite engineers, enabling them to create exceptionally high performing Reserve wheels. The project is still a little hush hush, but we’ll be doing a more in depth feature here soon so stay tuned!

Silverstone Paint Technologies (SPT), from the UK, are the pioneering company behind much of the best paint jobs you see on the F1 circuit. Using the latest in materials and finishing techniques SPT will be custom painting Syndicate V10s to shave yet more weight from the design and look F1-fast in the process.

So never mind the politics, the good news is that the DH season is nearly open for session once again.

See you puzzlers out on the track.

Triber66 (Mar 3, 2019 at 4:42)
What kind of gets me, is that they DID run enve for quite a while, and from my recollection didn’t have constant issues. Apparently they’re having some problems right now with their current product but they do know what they’re doing and I’m sure the quality will return. Still, that’s got to be a massive blow for them.

WAKIdesigns (Mar 3, 2019 at 4:51)
In an unexpected twist of action, Enve decided to release a new line of products using a new superior rim material, alaminym alloy. The head quality control manager Jack Splinter had this to say. We have been testing alaminym and were blown away with it’s properties for making heavy duty rims and stems. Alaminym contains lots of aluminium and therefore we have been able to lower the price by almost half. Our A70 rim will cost 400$ so the chance of riding trails and meeting others with this superior product is low, and they can still ask you whether they are worth the money and we guarantee at least 10likes per instagram post with them on it.

Our team rider Loric Varger had this to say: I am excited to cooperate with Enve Alloys, as racers we always need the best products and composite rims have been less than idea... thank you Loric! Let’s ask ur other team rider:

Greg Minnage: People bring too much attention to what they have on their bikes, they should maybe go out and... to the point Greg! - strong rims are... strong rims!

AD4M (Mar 3, 2019 at 5:06)
@Triber66: Past success is no guarantee of future success: ENVE need to get their act together, especially with competitors such as light bicycles and We Are One Composites offering superior products at lower prices.

IllestT (Mar 3, 2019 at 5:50)
@Triber66: dude are you joking?
Syndicate were getting through piles of rims per season. At the average WC their truck had a pile as tall as Greg

richardlockey (Mar 3, 2019 at 8:16)
@IllestT: were Enve wheels that bad? I had no idea? I've never read anything or heard anything about them breaking or anything?

RollinFoSho (Mar 3, 2019 at 10:10)
Meanwhile Santa Cruz is using N12 nanomaterials in their Reserve wheels. I wonder if other companies are doing something similar? Possibly WeAreOne and Guerrilla Gravity?

WAKIdesigns (Mar 3, 2019 at 10:16)
@RollinFoSho: yeah, next year they will be using N15 and intermediate state hypostatic resins giving 5% extra compliance. Danny Macaskill couldn’t wreck one on stairs, Mike Kazimer wrecked some in terrain. And they are called Reserve: when you want a pricey wheelset reminding you of overpriced restaurant selling overpriced fermented grape juice in Napa Valley.

drjonnywonderboy (Mar 3, 2019 at 10:39)
@Triber66: did you not see the run where Minnar's rim broke releasing all the air from the tyre and then disintegrated down the track?

WAKIdesigns (Mar 3, 2019 at 10:43)
@drjonnywonderboy: Minnaar has spoken very well on the Carbon rims none the less. He used to love them.

Triber66 (Mar 3, 2019 at 15:19)
No, I’m not joking. Obviously if the were going through rims they weren’t advertising the problem, but did they ever have a wheel failure during a race? @IllestT:

Triber66 (Mar 3, 2019 at 15:27)
I probably did see that, but I can’t remember it clearly. My original point is that I would expect them to fix things, but with press like this, they’ve got a tall order with trying to change opinions, especially with so many good alloy options out there. @drjonnywonderboy:

camparkinson1 (Mar 3, 2019 at 18:09)
@richardlockey: but santa cruz made there own rims and they seem to be really really strong

"whenever I look at ENVE wheels to possibly purchase them, this is what comes to my mind...

HairyLegs (Mar 4, 2019 at 5:44)
@alnavasa: Orange is just a softer version of Red, imagine how much faster it could be if they used red decals ... or switched to the Red Lyric for their #Enduro Bikes

xice (Mar 3, 2019 at 4:32)
Actually on a second read... hats off to Rob. Everyone gets pissed off with politics and those, who install politicians. Everywhere. He probably gets hurt directly by that import tax thingy. So why not payback a bit. He states his opinion. That has way more flesh than some dream team announcements and uber stoke statements by the riders.

Flowcheckers (Mar 3, 2019 at 6:46) (Below Threshold)
Considering that 9/10 of the world dislikes Trump its not offensive. But having Steve Peat play the part of Nancy Pelosi is probably offensive to both of those individuals!

Gavalar66 (Mar 3, 2019 at 7:16)
Makes sense for SC to sack ENVE off and promote their own product that they have heavily invested in, my Reserves are fabulous.

mtbforlife4 (Mar 3, 2019 at 7:51)
Always hate getting on PB and seeing anything political. Every other website just bombards you with politics, and it is nice to get away from that and just read about bikes on here.

spencer81 (Mar 3, 2019 at 6:44)
Syndicate approved weight saving haircuts and beard trims needed now too, to go with the paint job

vitality (Mar 3, 2019 at 3:32)
I told they already separated from internet and using they own runet

thenotoriousmic (Mar 5, 2019 at 2:40)
@nismo325: they break like any other carbon rim I don’t know if you’ve noticed but carbon isn’t a good material for rims why you acting surprised?

Pmrmusic26 (Mar 5, 2019 at 10:42)
Wheels always break. You should care who owns the company. Since they went public, business decisions are now based on stock price not as much as quality. They did change factorys as well....for cost and where they are now has a reputation of lower quality...... ..but PB doesn't go into that level of details....

aljoburr Plus (Mar 3, 2019 at 11:10)
Build walls too stop my trials trails flooding maybe, sorry too every one that dont get it my original comment was deleted?

aljoburr Plus (Mar 3, 2019 at 3:47)
—Rob Roskopp I can see some walls being broken down, but building walls can be just as important?