This is a letter I had hoped I would never have to write but unfortunately we had a break in on Tuesday night. Amongst various office computers, clothing, helmets and the like – the scumbags also took a decent amount of Santa Cruz and Ibis bikes, including pretty much the world's only Santa Cruz Tallboy that had been shipped over for the Eurobike launch next week. 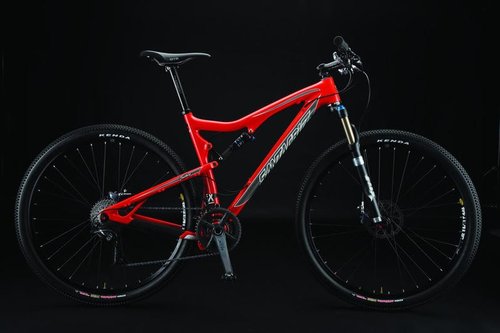 THE ONE STOLEN WAS BLACK

The Tall Boy is a 29er - 29inch wheels dumbo. So if you see some little 5ft 6ins chav(Council House and Violent) on it, don't do what we do, clothes line them and then stamp on their head. Instead grab them by the scruff of their neck and inform the Police.

This is certainly the only bike of its kind in Europe. And one of only a handful made so far – so it's going to stand out like a sore thumb on the trails. Please ask everyone out there – riders, shops and the like, to keep an eye out.

There were also several other bikes, details of which will follow once we start clearing through the mess.

Obviously your help in spreading the word on this is much appreciated – please contact Jungle Products with any information.

In 1986 POLICE 5 was directly responsible for the recovery of a set of 12 priceless medallions stolen from Kew Palace. They were sent to Shaw anonymously after he has said on the programme that "…the loser, a very distinguished lady, was not amused." They were sent to Shaw, through the post, wrapped in toilet paper.

One good medal deserves another and in 1987 Shaw Taylor was awarded an MBE… and at the investiture at Buckingham Palace ‘The distinguished lady’ thanked him personally. " I think I owe you this" she said. "With respect Your Majesty" replied Shaw "you owe me twelve." He is still waiting for the other eleven.

cranxwork (Aug 29, 2009 at 0:06)
Its so ridiculous, what do people think they're gonna do with one of the worlds rarest bikes. If they ride it they'll get caught if they sell it theyll get caught. So it probably will sit in their garage for the next 20 years. As you said, complete scum!!!

bigburd (Aug 29, 2009 at 2:15) (Below Threshold)
surely you cant complain about the native stealing things when you live on stolen land? KARMA ?

AdmanMTB (Aug 29, 2009 at 2:51)
esstential if they are someone after a quick bit of cash or a free bike they won't know that it's one of the handful in the world, making it easy to spot. They would probably rough it up first... to make it "blend it" with the 3 or 4 others in the world.

huckoveraduck (Aug 29, 2009 at 2:53)
Its going to end up hand painted green, outside a McDonalds in Liverpool. Should be back soon.

Freerider444 (Aug 29, 2009 at 5:41)
dude it was so funny, we had person last year try to steal a NEW turner dhr with new components and he couldn't fit it in his car. So as he is driving away the bike falls out the back and he doesn't notice

JonahH1992 (Aug 31, 2009 at 4:05)
Sorry but how secure is the place where this stuff was stolen? Either it isnt an the people who stoll it are mindless scum bags who saw it an went oooh shiny or the security is very good an the people who broke in are quite clever...

Themaninthenorth (Aug 31, 2009 at 10:04)
It doesn't matter how secure a place is, if the scum know what's in a building and its what they want, they will get in regardless of any amount of security.

TheLongMan (Aug 29, 2009 at 7:18)
I've had the satisfaction of running after a thief that had just stolen my friends bike and kicking he's ass as much as i could, after having stopped him by clamping the front brake very hard and making him fly over the bars.....then my friend showed up and he was of course much angryer than me...hahahaha...good times!! there is more satisfaction in kicking a thiefs ass than doing a 3 meter drop..

the-biking-whyking (Aug 29, 2009 at 12:57)
im trying to imagine the feeling of someone stealing my bike and me catching him in the act... gets my heart pumping just thinking about it

ste3le (Aug 29, 2009 at 12:21)
I hope they ride it and the bike mysteriously un screws its own QR and he tries one of his poxy wasteland DJs and the front wheel pops out and he ends up with a mouth full of mud, then the bike will mysteriously fall on top of him knocking him out and pinning him while it mysteriously called the police

sizzlin (Aug 29, 2009 at 3:12)
I actually found my bike for sale on the internet about 2 weeks after it was stolen a few years back. Huge thanks to Kona for letting me know about the ad and for the police that helped me get it back. I hope you guys are as lucky as I was. Since then I have invested in some serious bike locks.

smittyDH1 (Aug 30, 2009 at 5:35)
if your duymb enough to steal a bike that there are so very few of you would b dumb enough to put it on any site hope it turns up for you guys.. dunno wat anyone gets outta stealing to know you gotta live with the fact you have taken some1's pride and joy it must be a horrible feeling so low.. it shall turn up within time have faith

chquinn80 (Aug 29, 2009 at 9:58)
yeah, some people are real douche bags. Plus, what kind of retard steals a one of a kind bike! I wish I could be the one to kick their asses. One of my fondest memories is hitting a kid who was riding my bike in the back of the head with a rock

fantaman (Aug 29, 2009 at 2:24)
Why cain't people take their filthy hands of some ones else stuff and this sucks hard because Eurobike is next week

.I hope you find those bike thiefs

jdavidson (Aug 29, 2009 at 6:34)
eurobike next week. all new bikessss. but yeah stealing does suck, but it feels great when you catch them

SpeshAllDay (Aug 29, 2009 at 8:02)
Man that sucks. I got a sneak peak of the Tallboy at the Santa Cruz headquarters, but that one was orange. Sick bike.

itrybutstilldontwin (Aug 30, 2009 at 23:10)
see i would be smart enough to steal a really nice bike, but not one thats pretty much one of its kind duhhhh