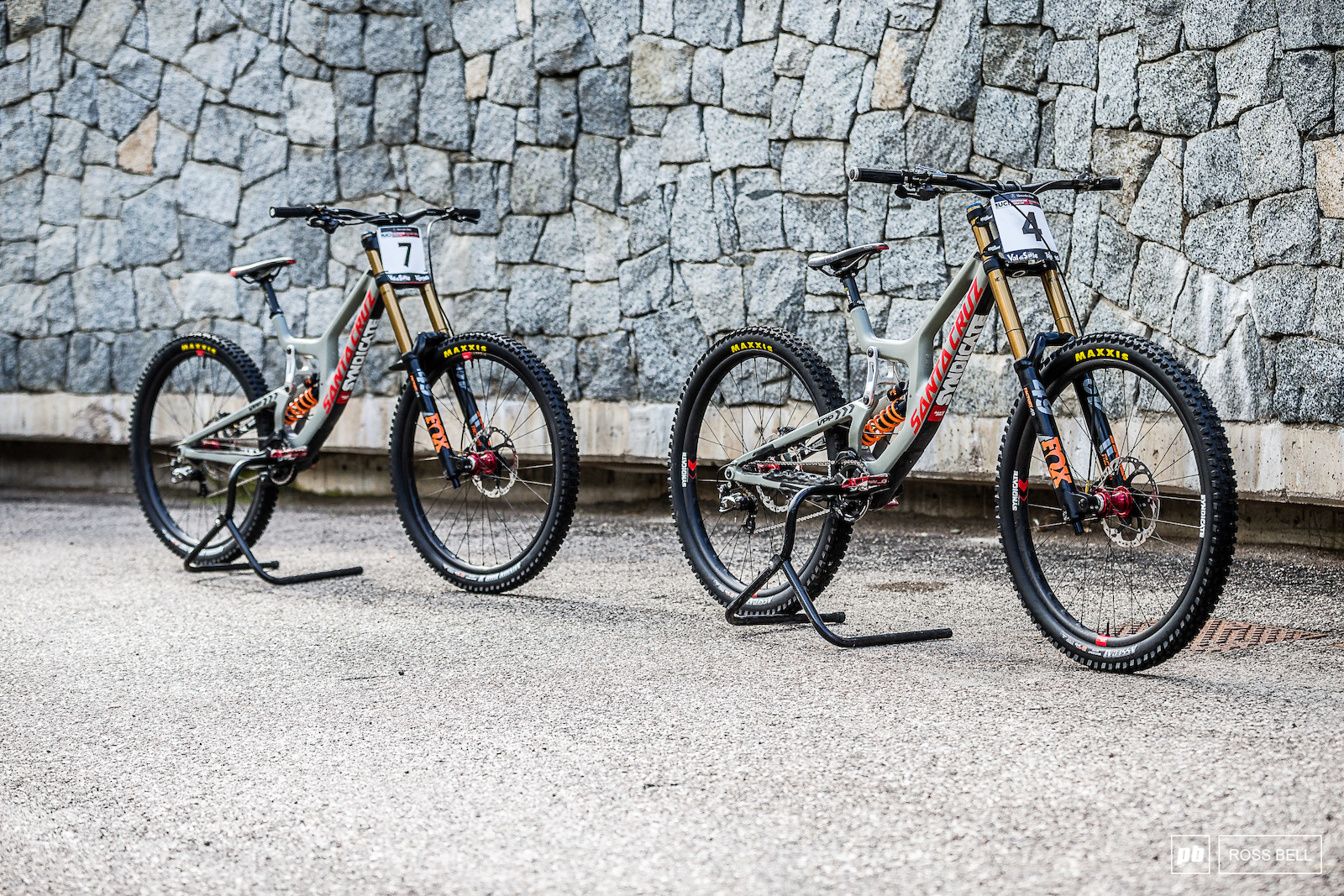 Santa Cruz's Luca Shaw has been oh so close to taking his first World Cup win at both of the last two rounds, with a flat tire and a crash knocking him out of contention. His teammate Loris Vergier has been right there as well, with a 5th in Leogang that was just 2.1-seconds off of first, and a 2nd at Fort Bill that was just 0.27-seconds off of Amaury Pierron's winning time. World Cup racing is so damn good right now, isn't it?

Both Vergier and Shaw have been on Santa Cruz's brand new and still very much not production V10 29er, and we caught up with their respective mechanics to see how their setups differ. 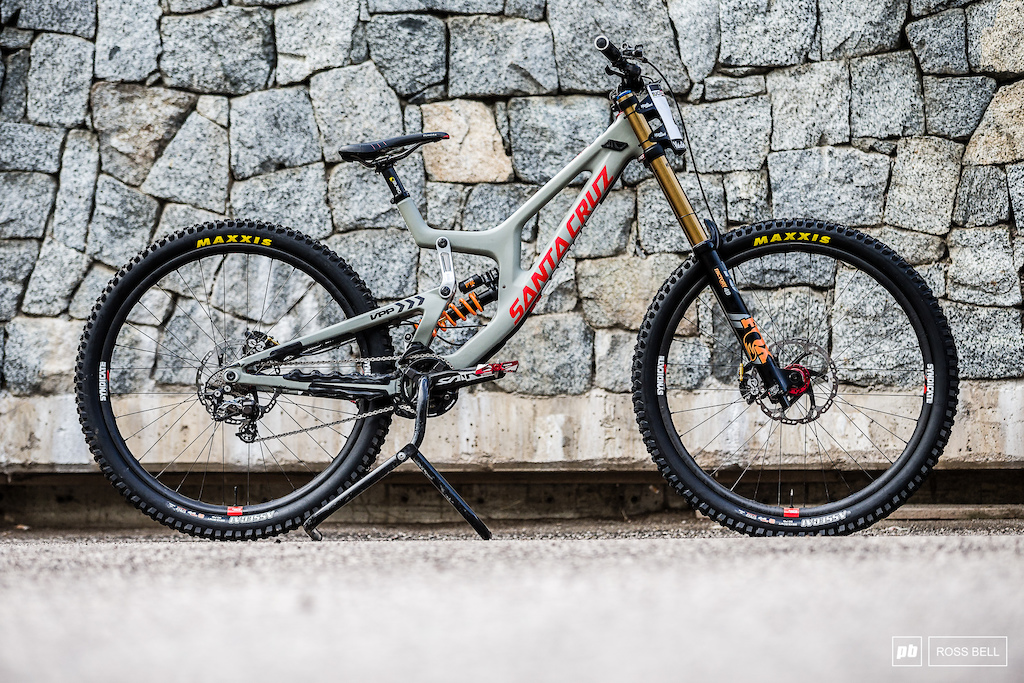 Vergier stands 5' 8'' tall and while he did start this season aboard a medium-sized prototype, he's since moved up to a large as he prefers its 460mm reach number, his mechanic, Pierre-Alexandre Roche, explained to PB photographer Ross Bell.

The decision to race a medium early in the season was based on last year's bike, which was also a prototype, as well as comparing numbers to the Specialized he was on before signing with Santa Cruz, but it looks like a large V10 with a standard headset (as opposed to a reach-lengthening headset) is just the ticket for the French racer. 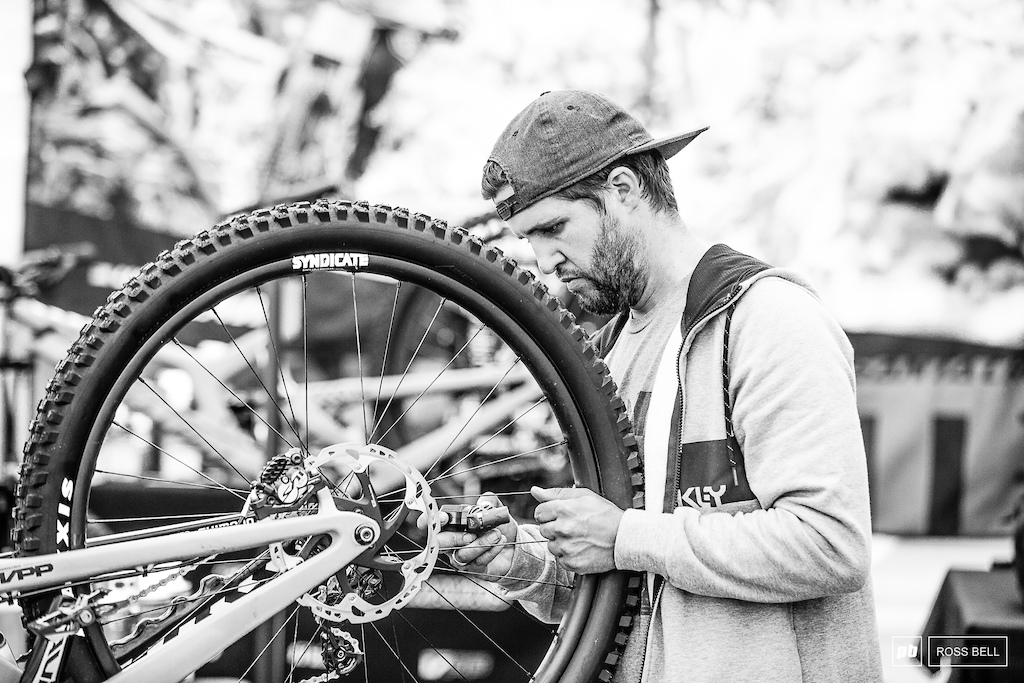 Pierre-Alexandre Roche working on Loris' V10
At 154lb, Vergier runs 80 PSI his Fox fork, and it sounds like he's all about that ramp-up, too: there are four tokens inside to keep him from bottoming too often. He prefers a relatively quick rebound speed, Roche said, but his compression settings are in the middle of the range. 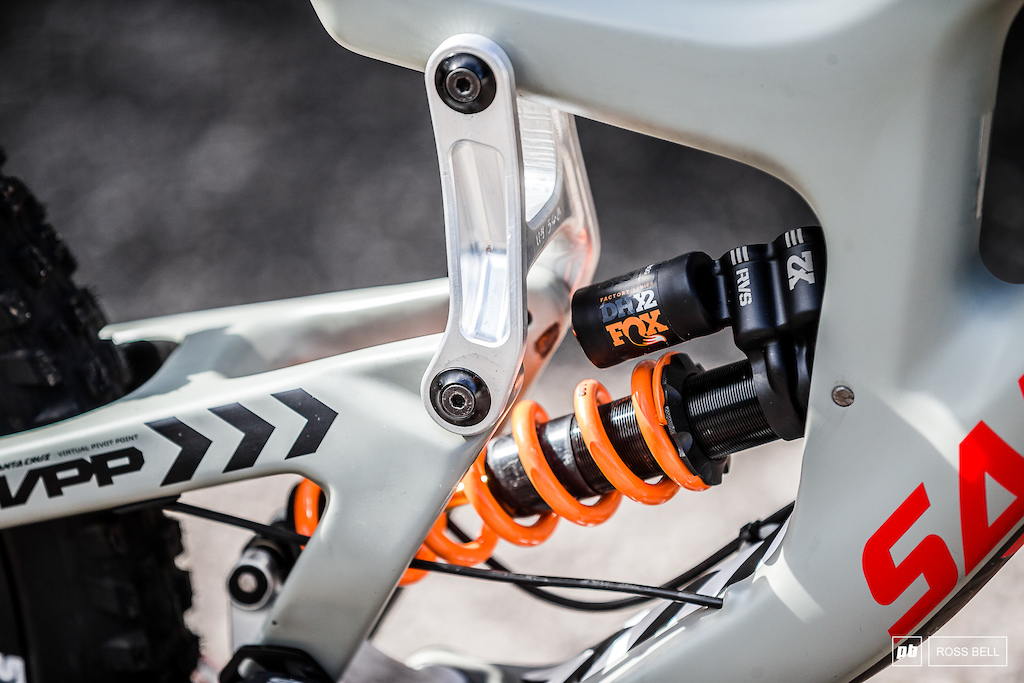 Vergier is running his V10 in the 'Hi' geometry setting in Val di Sole. 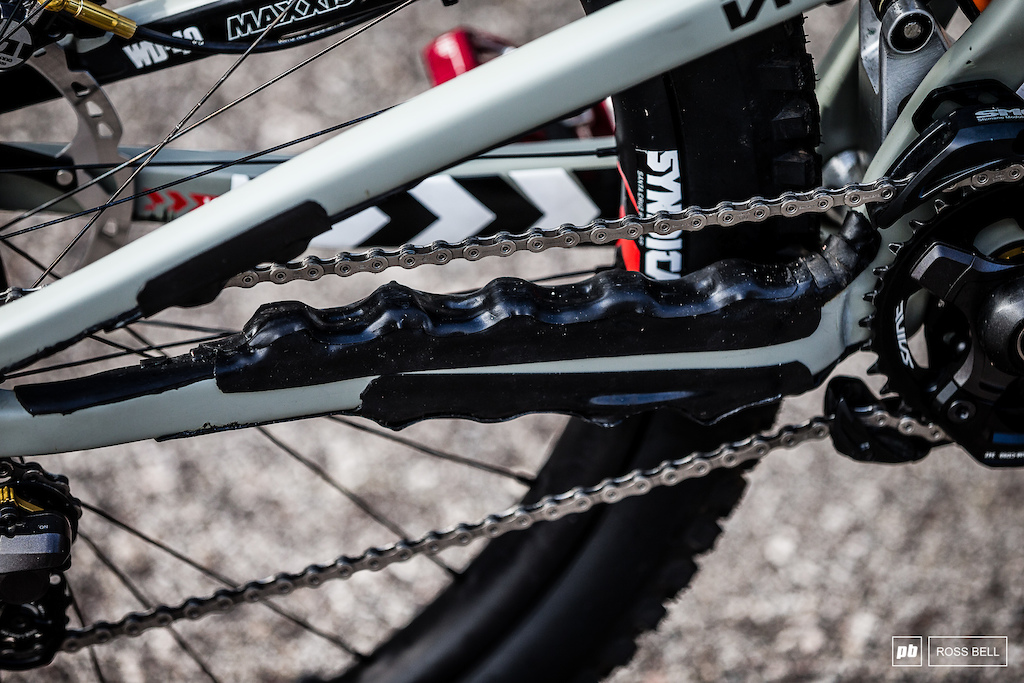 A quiet bike is a fast bike.

Out back, he's chosen a coil-sprung shock as of right now, but Roche did mention that his racer likes to experiment with both options and that Loris himself said he should have been on a coil at the Leogang World Cup. Hindsight is always 20/20, though.

It's also worth pointing out that his bike is being run in the 'Hi' geometry setting on the third-generation prototype lower link that the whole team is using, so these guys aren't always defaulting to the lowest, slackest numbers. 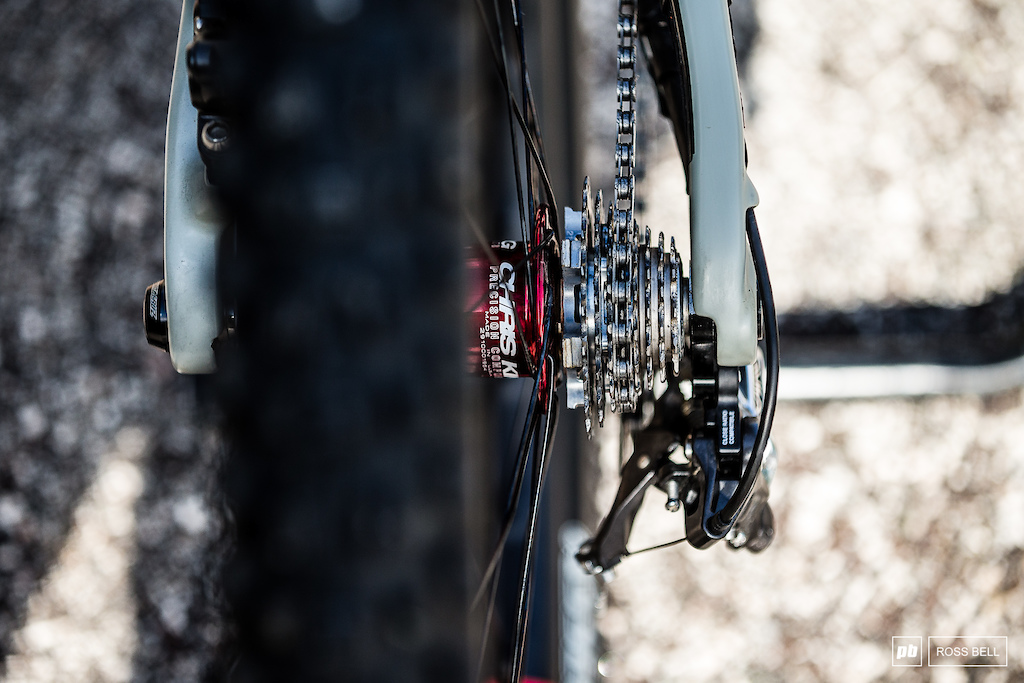 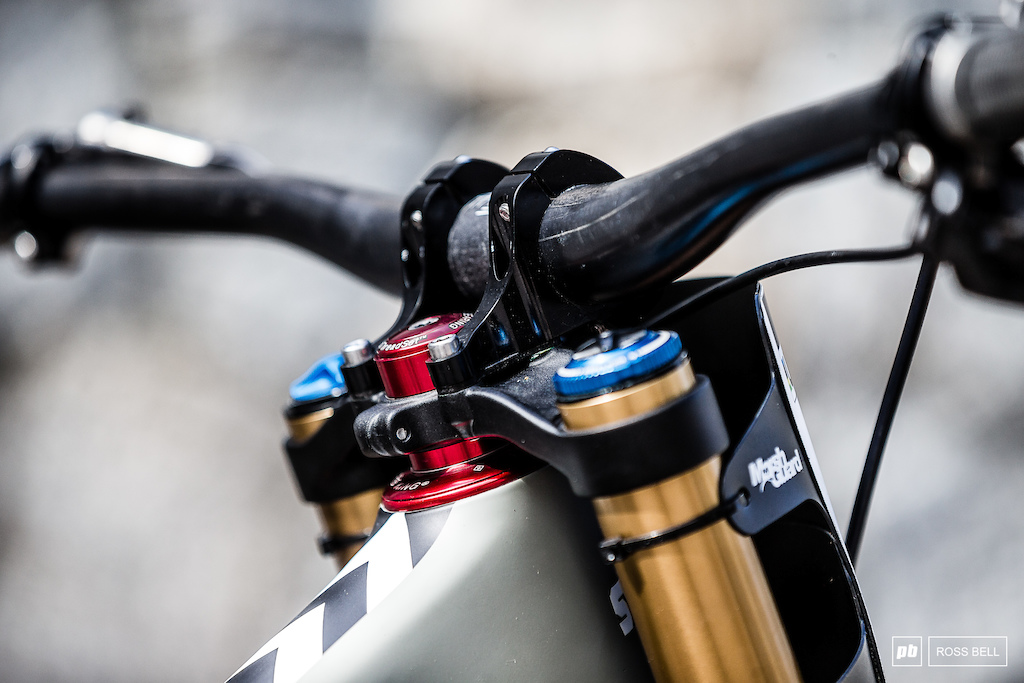 Loris' cassette used to be a 10-speed unit, but then the saw came out to delete the top two cogs. Only what's required.

Loris' cockpit is pretty straightforward, but Roche did say that they're often playing with stack height via 2.5mm spacers, depending on the track. His stem is a 45mm unit, and his 20mm rise handlebar has been cut down to 790mm. His brakes are setup moto-style, and check out the XTR / Saint combo; the straight Saint setup is too on/off for Loris' liking, Roche explained. He's quite the gram counter, too, so that could also be a factor.

The two standout component specs on Loris' machine include the prototype Santa Cruz Reserve carbon DH rims that are now the third version and apparently close to being locked down, according to Roche. The other notable spec is the cut-down 10-speed cassette that's now an 8-speed block. 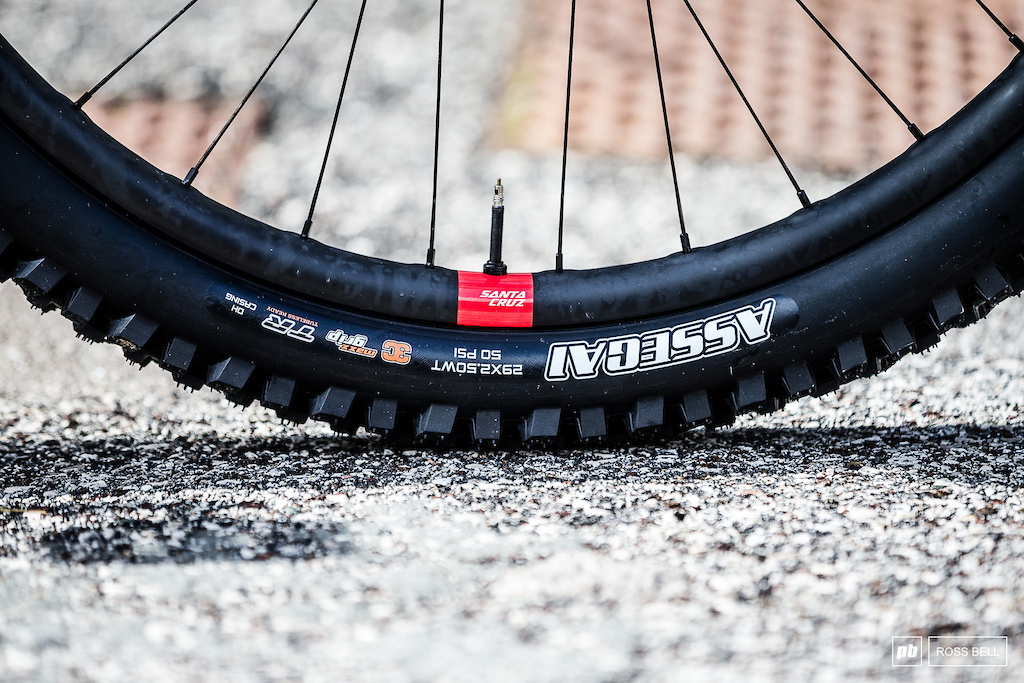 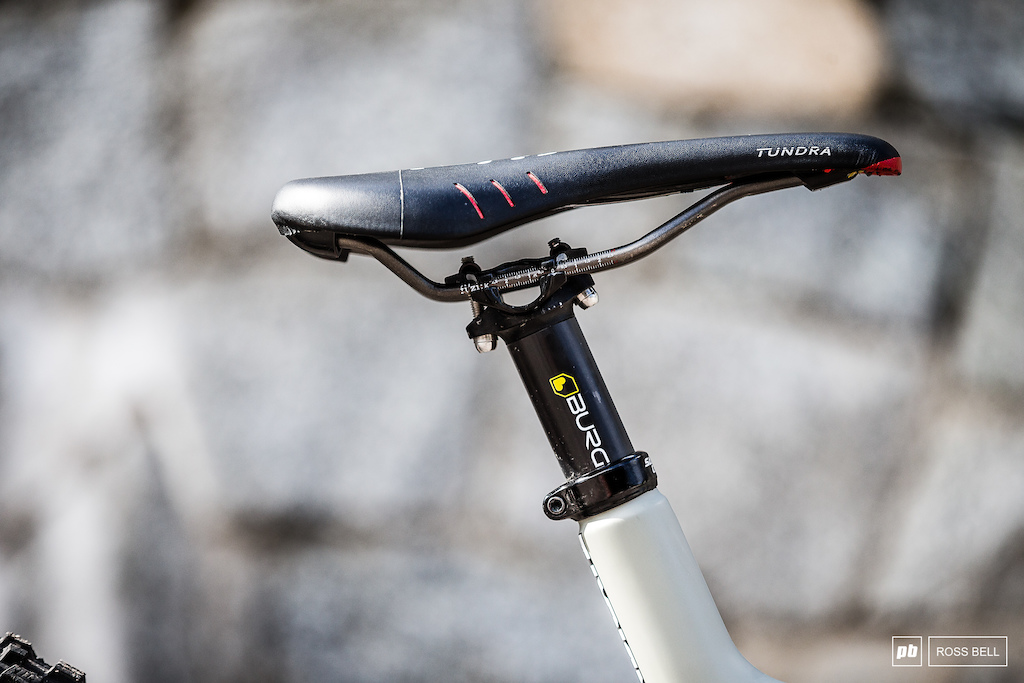 The Syndicate team has been testing Santa Cruz's Reserve carbon DH rim, and these are the third-generation prototypes that are said to be close to production. 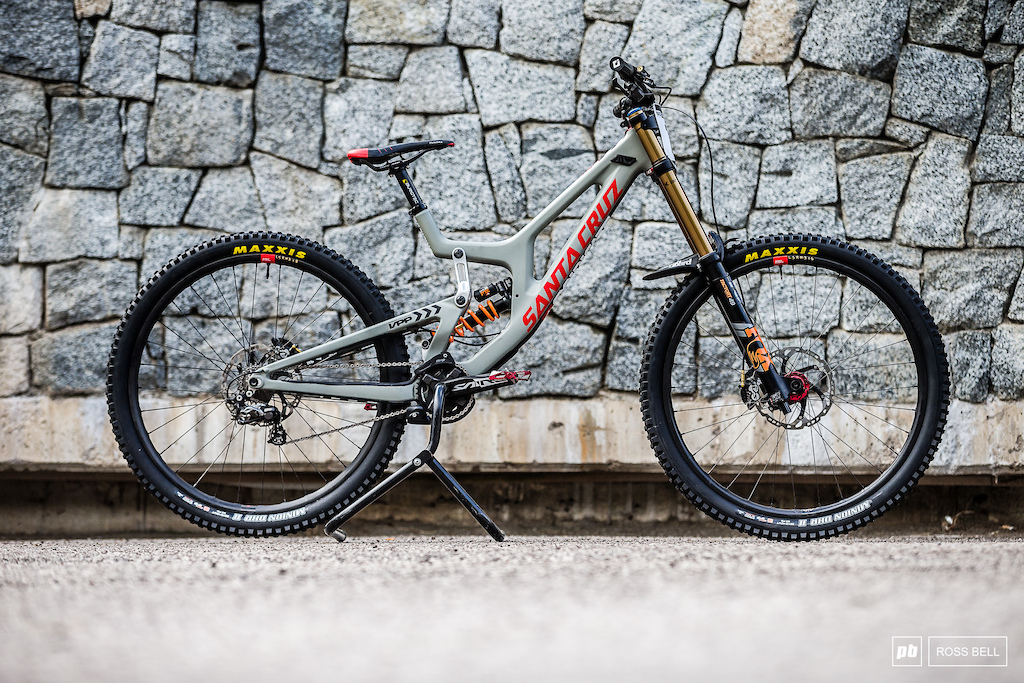 At 6' 1'' and weighing an extra 10lbs, Luca Shaw has a 5'' height advantage over his French teammate. He's also on a large-sized V10 29er, looked after by team mechanic Dougy Hatfield, and without a reach-increasing offset headset, too. He does get an extra 5mm at his stem, with Loris going for the 45mm and Luca running a 50mm unit, as well as an 800mm handlebar that's a touch wider than Loris, and a higher stack height to boot.

So both are on the same large-sized frame, but 5mm there and 10mm here add up to what are probably very different feeling cockpits. 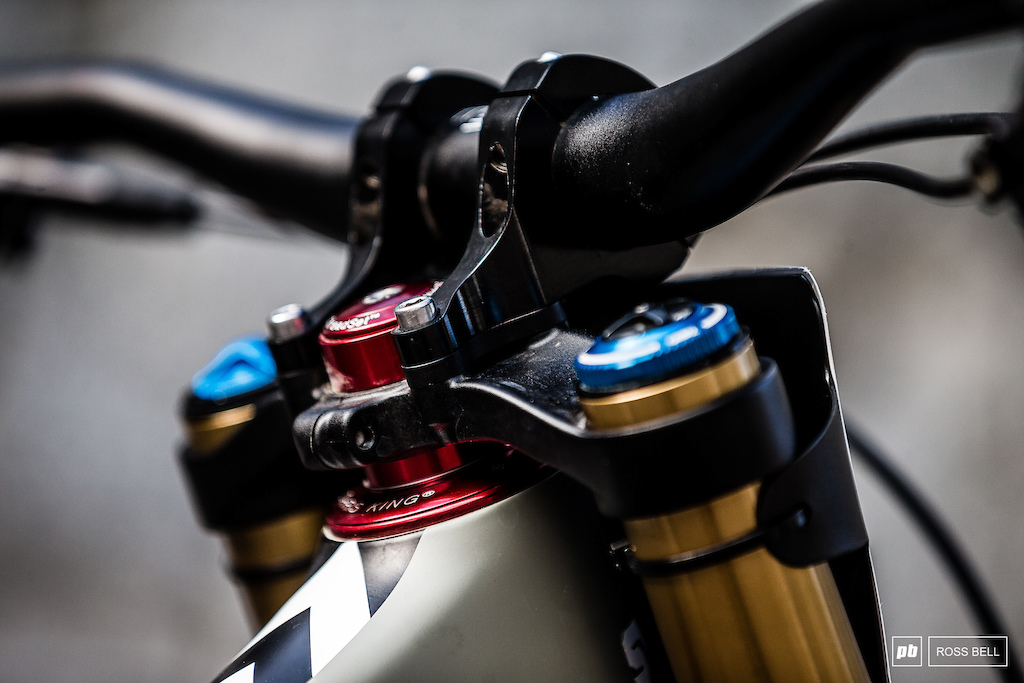 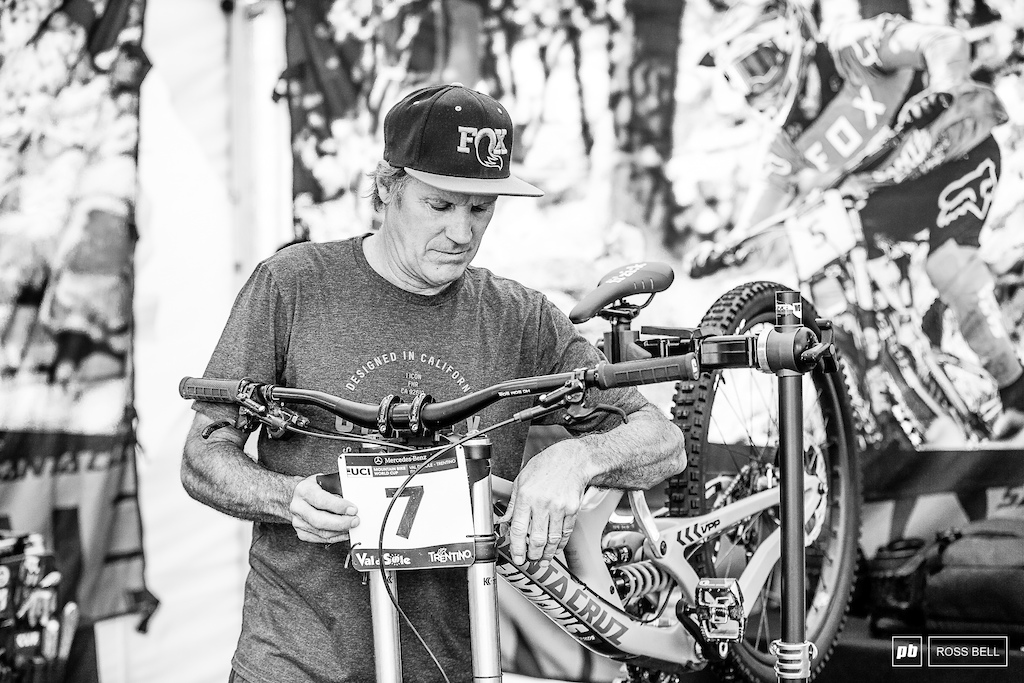 Luca is a bit more settled and consistent with his setup than Loris, Hatfield said: '''Once he finds his setting, he's pretty solid with it and doesn't have to keep changing back and forth.'' So it's no surprise that Shaw's bike is running the exact same suspension as he used for Crankworx Les Gets where his finished 2.04-seconds back of Troy Brosnan. No point in messing up a good thing, right?

Luca's 'good thing' consists of a 525in/lb spring on his Fox X2 when it's in the 'Hi' setting that the team seems to prefer here in the Valley of the Sun. When he does switch to the 'Lo' setting, he also jumps up to a 550in/lb spring, Hatfield said, to compensate for the change in leverage ratio. 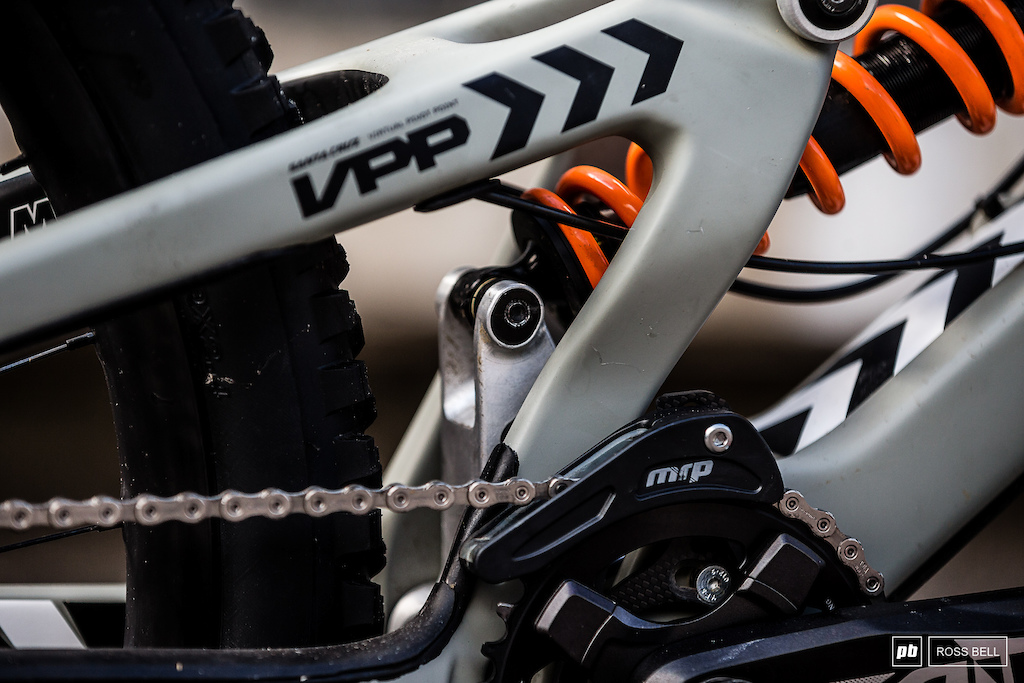 Hatfield keeps all his riders' suspension settings in his own setup bible, but he didn't have it on hand to share Luca's fork numbers with the world. That said, I bet it's too firm for us and just right for him. Funny how that works when you're a top World Cup racer.

When it comes to slowing down, Luca prefers to go full Saint whereas Loris runs an XTR / Saint hybrid setup for a lick more modulation. His guide is from MRP whereas Loris' is a Shimano unit, and Greg uses a Gamut guide. Shaw also has an unmodified 10-speed cassette, so an extra two gears over Loris' drivetrain, and a custom seat from Fi'zi:k that has a cutout rear section to clear the V10's rear tire at full compression. Despite the differences, Hatfield says that all of the team bikes come in at around 35lbs. 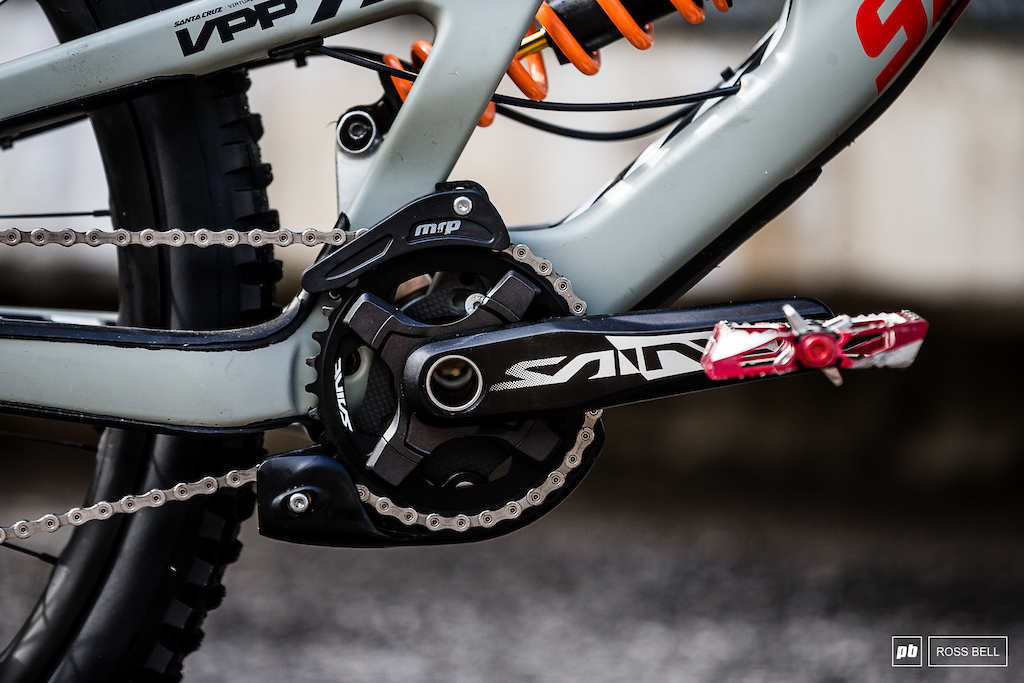 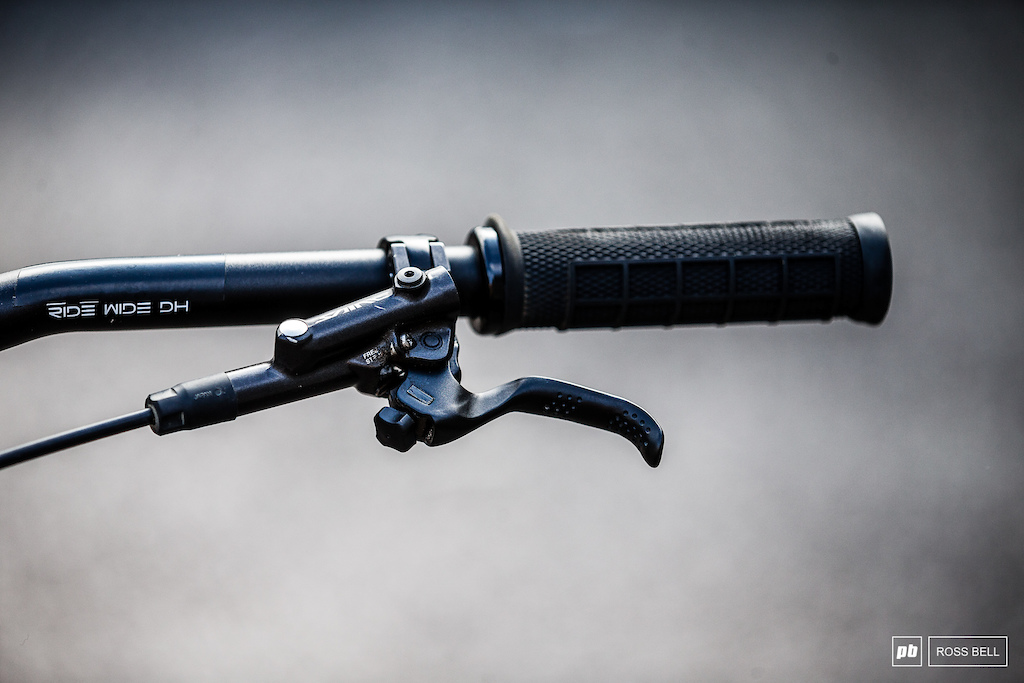 Saint all around for Shaw, with the exception being an MRP guide.

Check the angle, too. Pretty level.

nouseforaname (Jul 5, 2018 at 15:32)
@mikelevy: So French. When I tried to do that it made me ride off the back of the bike so much i kept blowing corners. #notworldcupmaterial

HARv379 (Jul 5, 2018 at 18:24)
@mikelevy: how the heck have I never noticed Loris runs a right side front brake, good info. So odd. Do you have any idea if he's left hand dominate? I've raced and been on moto's over quadruple the time I have been on MTB's, and for whatever reason, I can't imagine running the front brake on the right side unless my left hand/arm was stronger and needed more strength to grab a little rear brake through the rough stuff.

haroman666 (Jul 6, 2018 at 0:50)
Bit confused... Surely the dominant hand (the one with better motor control and therefore brake modulation) is better for the front brake? So "moto" brakes, in my eyes, makes more sense if you're right hand dominant.

It's supposed to be, the rear brake is on the side that you won't use when crossing traffic at a junction.

EG: In the UK, riding on the left hand side of the road and I come to a right hand junction. I stick my right arm out, cross traffic and have the rear brake on the left - if I need to stop, less chance of going over the bars. Apparently.

unclesomebody (Jul 6, 2018 at 1:55)
@mikelevy: I thought it was the lack of servo wave on the xtr race levers that gave more "modulation". The ones shown are the trail levers that have servowave (AFAIK).

maglor (Jul 6, 2018 at 2:41)
@unclesomebody: i'm not 100% but assuming they are the new XTR levers (from the new 4 pot XTR brakes) which are meant to be designed to have better modulation than the old levers.

rchez08 (Jul 6, 2018 at 2:54)
@maglor: They are the current generation XTR, designed for 2 pots. The levers may push a little less fluid volume for a given lever travel, due to a different servo wave profile, hence more control and modulation. The lever piston sizes are identical at 10mm. I may be wrong though.
m.pinkbike.com/photo/16076164

Will-McCurrach (Jul 6, 2018 at 5:11)
@rchez08: from my experience running an xt lever on a saint, the lever throw is the same for both brakes but the pads are closer on the xt as the fluid volume is different. With respect to feel, they feel slightly less grabby but still very much feel like a saint due to the caliper layout of the different size pistons. This difference in piston size means that the smaller one moves further so the pad will contact the rotor at a slight angle and due to the flex in the pad will give a slightly less direct feeling.
I would not deliberately go out and buy an xt lever specifically for this. The Japanese know what they are doing and the stock setup of both brakes are designed for different purposes so will by definition respond differently.
Also I firmly believe that fine motor control trumps having a spongy brake that some people call "modulation"
W

HARv379 (Jul 6, 2018 at 20:44)
@jamesdunford: Who the hell crosses junctions on their bikes that needs to stick their arms out??? Props to these guys. I ride bikes to get away from traffic jams and junctions where I need to tell people where I am going.

srsiri23w (Jul 5, 2018 at 16:03)
Surely Santa Cruz could come up with something better than that hack job on that rear cassette. Put a proper spacer in there already!

nojzilla (Jul 5, 2018 at 23:17)
I'd have thought, at thier level they could get a custom or proto full width 7speed Chris King hub. Especially on niners

Fulgacian (Jul 5, 2018 at 23:56)
Shimano's largest 3 cogs are bound together to the same spider (as far as I remember), so Loris must find the eighth one useful.

maglor (Jul 6, 2018 at 2:44)
Why both spending money and time when a 5 minute hack works just fine, i'm happy they don't waste money on unnecessary custom parts, the less the team costs to run the less the bikes have to cost to cover it (being very hopeful they pass the savings on though)

RoboDuck (Jul 5, 2018 at 21:02)
@mhoshal: I would be surprised if there was a single bike on the circuit under 30lbs. DH brakes and tires with coil shocks on a huge proportion of bikes.

mdrrich (Jul 5, 2018 at 19:32)
That's interesting, the tire will almost hit the seat in full compression. Doesn't sound like a design I can get behind; after all I just might get smacked in the behind.

spaceofades (Jul 5, 2018 at 19:47)
a design that has been consistent over countless bikes... including the current generation of v10

mtbikeaddict (Jul 6, 2018 at 0:30)
Yeah... first thought... A cutout in the seat to clear the tire? Sounds like a tablesaw when the blade rises through the slot... Don't necessarily fancy that under my butt, but hey, so long as it doesn't actually connect...

CM999 (Jul 6, 2018 at 2:21)
Santa Cruz have always made short bike and then had to stuff reach extending headsets in them despite having a history of tall riders. Its the main reason Ive never had one.

aljoburr (Jul 6, 2018 at 0:29)
Well given the choice of a large V10 would go with Luca's bike, or would need stiffer spring if on Loris's bike, but not likely get to try either?

Joejoehut (Jul 5, 2018 at 16:06)
Shimano pro stand, I recently got one and love it
www.pro-bikegear.com/global/en-gb/accessories/Bike_Stands/PRO_TL_BBWORKSTAND