Join Pinkbike  Login
With new partners and a new rider, the team around Olympic Champions, Nino Schurter and Jenny Rissveds, looks towards a bright future. Scott-Sram MTB Racing Team is the new name of Scott's global MTB team for the next four years. Sram has been a great partner of the team since the very beginning in 2002 and now as a title sponsor, the partnership includes RockShox as the suspension partner as well. "We are excited to work with Sram and RockShox towards our long term goal—the 2020 Olympic Games in Tokyo", said Team Director, Thomas Frischknecht. 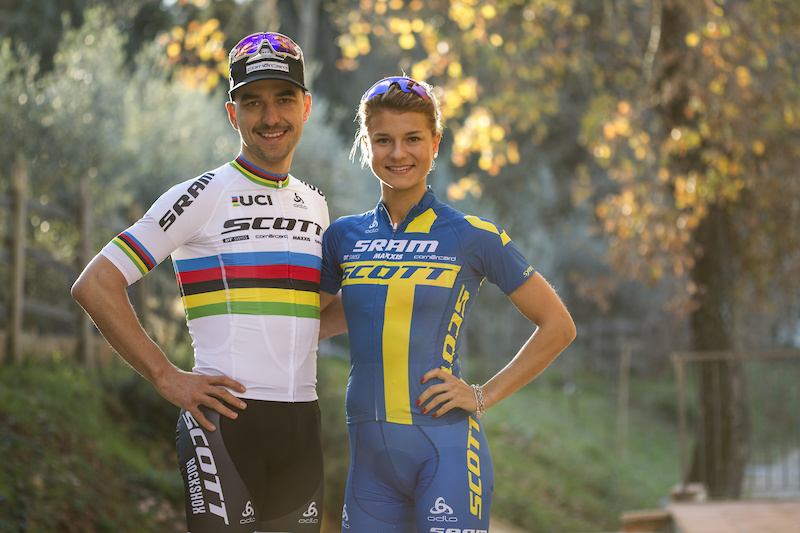 Olympic Champions Nino Schurter and Jenny Rissveds are happy to welcome a new team member as well, UCI World ranking no. 5 Matthias Stirnemann. The Swiss talent will not only be a strong addition to the World Cup races but also ride aside Nino Schurter at this year's Cape Epic, which will be the first highlight of the 2017 season. Andri Frischknecht, who will race in the Elite class for the first year, will team up at Cape Epic with former U23 World Champion Michiel van der Heijden. 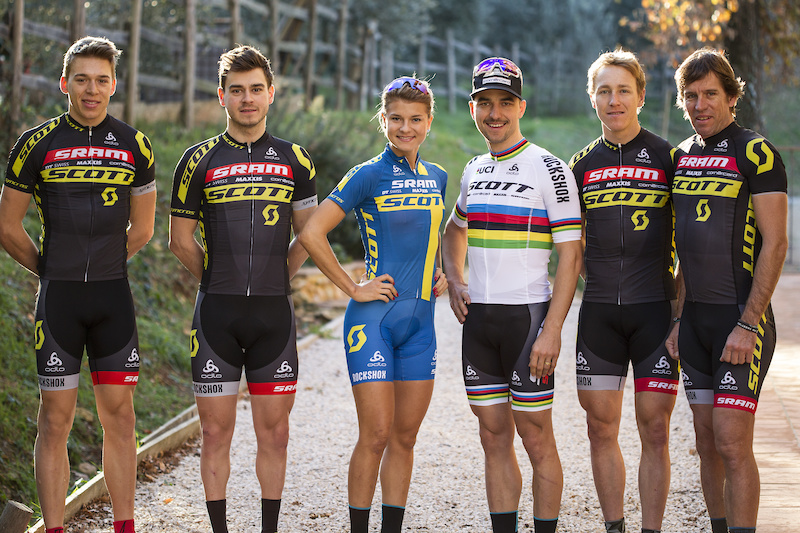 Not shown in the team picture is Marcel Wildhaber. The Swiss cyclocross specialist will also ride in the new team colors. #yanickthemechanic Yanick Gyger will be supported by Kurt Gross, the team's new wrenching force. Also new to the team is physio, Julia Hegar.

The team has already had their first training camp, which was held in sunny Tuscany. Massa Vecchia offered the team perfect conditions to get started with the new equipment, though the team will still rely on the fast wheels of DT Swiss. The new bikes will now be equipped with Syncros components and roll on Maxxis tires. Nino already won the Olympic race aboard Maxxis tires and with this brand, Scott-Sram sees great potential for developing excellent tires for the future. For many years now the team has been equipped with ODLO clothing, on and off the bike and this partnership will continue. Also remaining as a long time sponsor is the Swiss credit card company Cornercard. 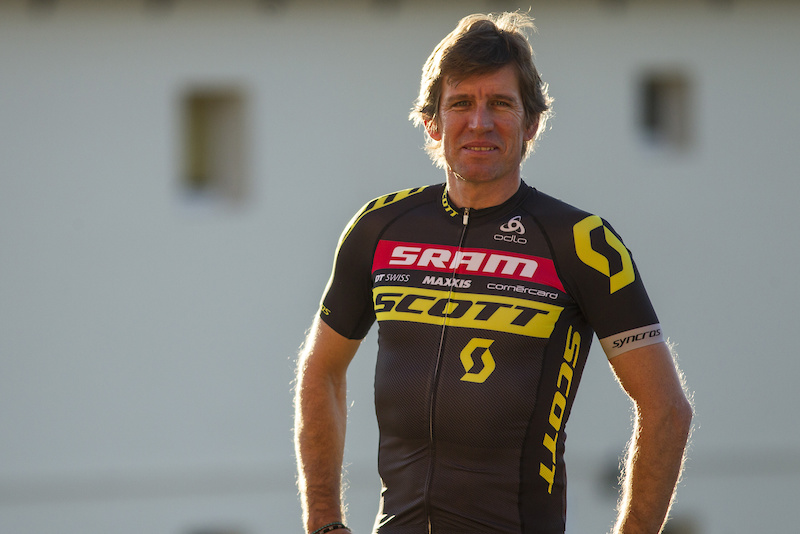 Thomas Frischknecht, Team Director of the Scott-Sram MTB Racing Team had this to say; "After an incredible #gloRIOus year in 2016 with two World Champion titles and two Olympic Gold medals, the goal in 2017 will shift a bit. We do not believe we can repeat this super successful season but try to do certain things a bit different instead. Stay tuned to get more news after our team presentation which will take place in South Africa just prior to the Cape Epic!"

Reto Aeschbacher, Brand Manager of SCOTT Sports said; "Working with living legends like Thomas Frischknecht and Nino Schurter is a true privilege we couldn’t be happier about. Their success and their undivided partnership have formed the image of SCOTT as a brand for many years. Cross-Country racing is the spearhead of development for the mountain bike industry. No other discipline influences the sport of mountain biking more than Olympic Cross Country. To run an XC race team on the highest level requires the uncompromised support of many parties. With the total support of industry leaders such as SRAM, RockShox, DT Swiss, Maxxis, Syncros, Odlo we have the strongest industry players aside our global race team, and we are sure to continuously push the sport and MTB products for the next four years."

David Zimberoff, Sram's VP of Marketing said, "SRAM is thrilled to renew its partnership with Scott and the racing team. New this year for us is the addition of the RockShox brand so we couldn't be more excited. Coming off such a #gloRIOus year, we are committed to providing the best level of service and support to the team and riders, as well as the best performing products for continued success." 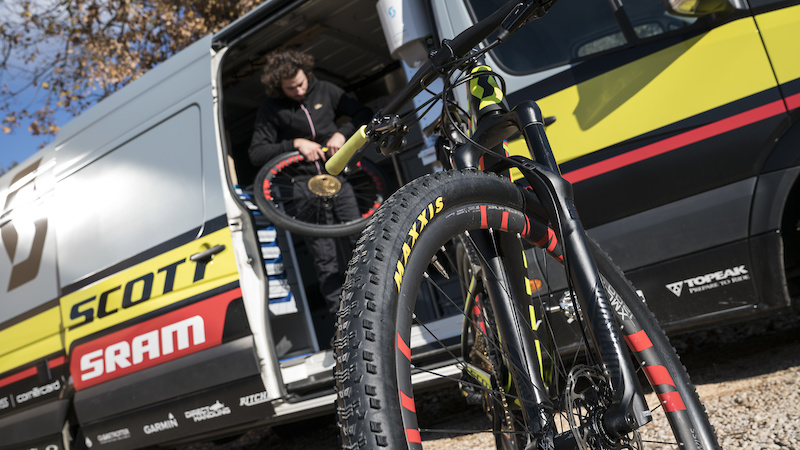 mtnbikeoc (Jan 12, 2017 at 12:26) (Below Threshold)
haha.. I wish I hadn't seen these pics so soon after lunch. An why is Scott bikes sponsoring the "lollipop kids" cycling team?

Speed above all else.

singlespeedman (Jan 12, 2017 at 23:31)
yeah, Thomas Frischknecht is a former world champ himself, still a pretty fast guy and rides with his team...

EastCoastDHer (Jan 13, 2017 at 6:28)
@salespunk: Agreed. When you can give the likes of Tomac, Overend and Juarez a run for their money you can wear just about anything. Fixit is a legend and a true leader.

adrian-montgomery (Jan 12, 2017 at 20:04)
I sincerely hope the industry will migrate away from showing athletes in lycra for team presentations. This applies to the road too. If you've ever been to a road race you see ten guys standing in front of the crowd basically naked and covering their junk. Well, there's usually one guy who fluffed before the shoot and puts his hand on his hips. They spend all season in their sisters undies, no reason to shoot them in kit for the posters and autograph cards and team announcements. I love these guys, Nino is a BA MoFo, and Frischi is a legend... But the race kit is for work days, in the saddle. RIP Team Kit... please.

iamamodel (Jan 12, 2017 at 20:33)
I disagree with your sentiment but your presentation of it is funny, which is what really matters to me. Props!

xcracinguy (Mar 21, 2017 at 22:47)
@iamamodel: I agree with you Iamamodel . every athelete has a uniform. Why is the chimp looking at their junk anyway? weird dude.

Gravityassisted (Jan 13, 2017 at 3:37)
you think those are huge, go google olympic cyclist versus toaster.
www.youtube.com/watch?v=Tn4N55JL5w

Hats off to the team this should be an ace season.

EastCoastDHer (Jan 13, 2017 at 6:33)
@chillrider199: Just wait until you watch your first National Cyclocross race. Some of the fittest folks alive. As in scary fit.

EastCoastDHer (Jan 13, 2017 at 7:37)
@chillrider199: Haha, its not for everyone. I ended up as a volunteer on my buddies food truck at a race. It wasn't as cringe worthy as you think and some of the top racers are also Mtb legends (Todd Wells, for example). If you remember John tomac you should recall he used to race mtb with drop bars. Besides the builds some of the riders have are quite impressive.

chillrider199 (Jan 13, 2017 at 7:48)
@EastCoastDHer: Actually that one race rat boy did recently where they ran throught he corn maze and had huge excercise balls thrown at them and a bunch of crazy stuff, that sounds fun

maxmcculloch (Jan 12, 2017 at 14:19)
What a beast of a team! Two olympic champs. Can't wait for the world cups to start. It's too bad so many people are trying to find the negative side of it. I guess it makes it interesting to read the comments though.

kclw (Jan 12, 2017 at 12:58)
The only thing 6 years old about those tires is the tread pattern. I suspect rubber, casing and width are completely different

Maxxis (Jan 13, 2017 at 5:33)
@WhatAboutBob: Spot on. There's more than meets the eye with our team issue XC tires. The Aspen works really well for modern XCO courses but we found through testing last year that there was a little more speed to be found on a proven tread pattern.

PapaStone (Jan 14, 2017 at 6:55)
@Maxxis: Bring the team issue XC tires to the paying amateur masses. You know all the amateur racers would love to have the chance to race on the same tires Nino uses.

preach (Jan 12, 2017 at 12:59)
Is it just me or in the group pic....do a couple of them look like their heads have been increased to like 1.5x in size and superimposed back on their bodies...especially homie in the white jersey and homie on the far left?

nsteele (Jan 12, 2017 at 16:40)
I know you're probably like me and live more for DH than XC, but um, "homie in the white jersey" is current Olympic champ, Nino Schurter, one of the most bad ass riders around- on any terrain. Prolly good to learn this particular homie's name. Barring injury, he'll be on or near the top of the podium all season once again.

Think you're right about the picture though. The more I look, it all looks photoshopped. Very weird.

crash-brother (Jan 12, 2017 at 18:41)
That looks like the most photoshopped team pic ever. There is no way all those people were there together. Something just looks wrong. Whoever copied and pasted the dude second from the left in cut his ankles soooo skinny! Haha.

I guess that would be more of a challenge to photoshop them standing on the same ground together. Funny pic

Motivated (Jan 15, 2017 at 0:52)
Ms. Rissveds posture just looks painful and I assume she's trying to stand straight - notice her knees are bent and the tilt of her waist - generally not good for back health, but I'm no expert. By contrast, Nino appears so much more natural and lithe. Quite the powerhouse team! Best riders, best XC bikes, best XC components, best manager.

fattyheadshok (Jan 14, 2017 at 6:41)
Why do these XC riders racers insist on wearing all that dumb spandex? At no point in the race do they even begin to hit the speeds that baggy wearing, hair flailing in the breeze, loose jersey flapping, body armor wearing DH racers do. Their not approaching 70km/h so the argument that spandex makes you more "aero" is mute. Drop the spandex folks. You're not road racing. You're mountain bikers for Chris sakes! Have some respect and dignity! You don't need the spandex! You don't need it. BTW baggies are more comfortable too.

willycpc (Jan 12, 2017 at 14:31)
Nino Schurter would kick your a** on any DH course any place. if he was riding a 20 year old hard tail, he would still be at the bottom of the run signing autographs and talking to his fans while you were still riding.