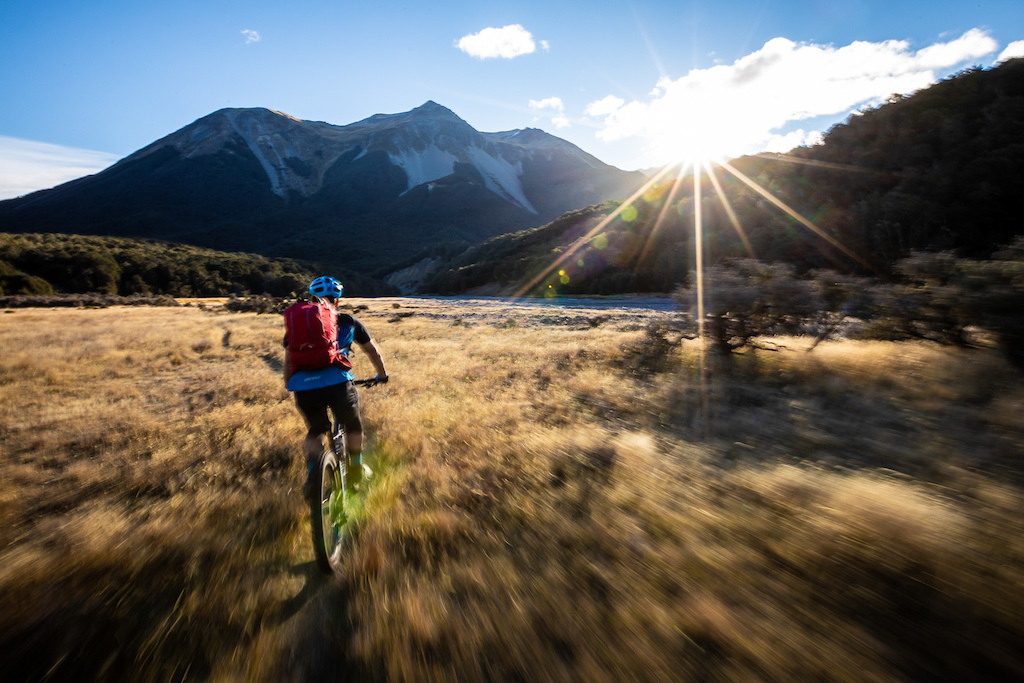 with the Giant NZ Team
Around two weeks prior to leaving, Craig called me up to reserve Anzac weekend for another back-country exploration. It wasn't until the day before we left that we sat down to discuss plans. With the weather looking perfect and anticipating our last chance to get into the hills before winter, we decided to go big. The plan was to pull a shortcut on the Cass-Lagoon circuit by climbing up through Craigeburn Valley ski field and dropping off the back of Hamilton Peak to Cass Saddle, then rejoining the circuit to descend to Hamilton Hut. This way we would skip the 3-4 hour grovel up the creek to Cass Saddle that Craig had previously done and would rather avoid.

To be honest, I was fairly skeptical of the descent off the back of Hamilton Peak. Although I trusted Craig's judgement (having assessed it on the previous trip), I wouldn't be satisfied until I did a little more digging. After a little more scoping on Google Earth and aerial images from LINZ, we both agreed that it was probably a go. So a little over a week later when Anzac Day rolled around, we found ourselves setting off climbing up the Craigeburn Valley ski field road. 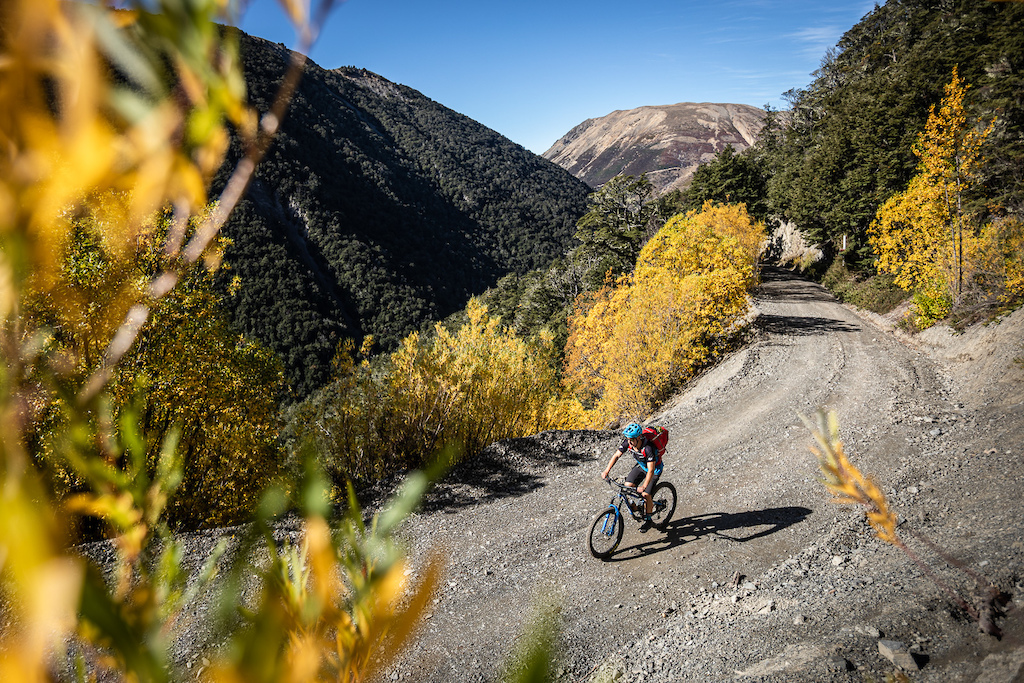 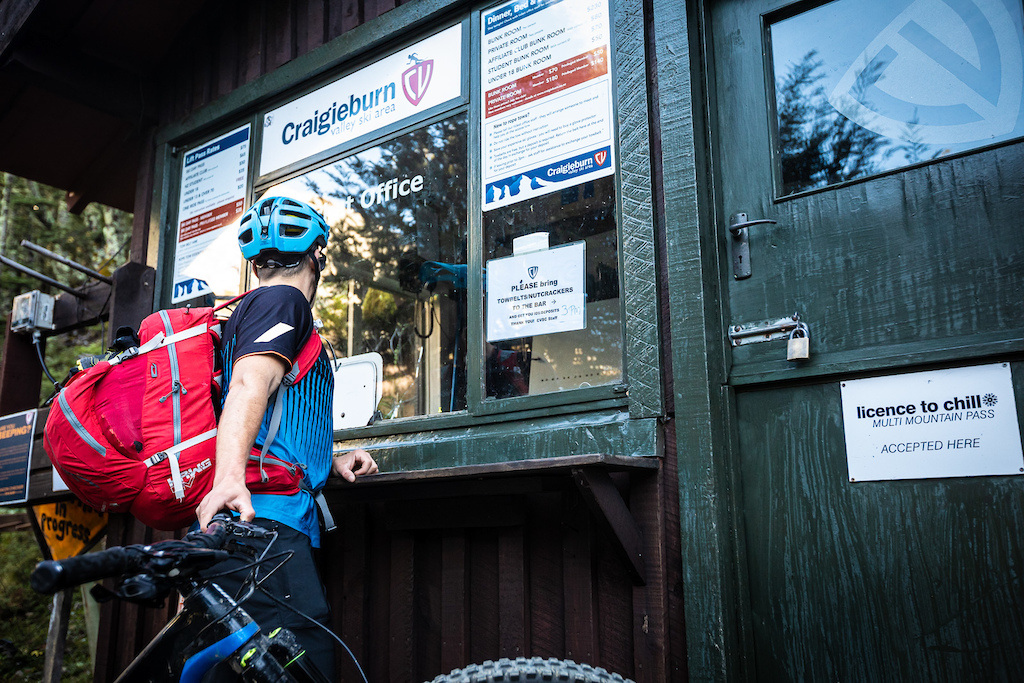 Climbing up the Craigeburn Valley access road was a good way to warm the legs up and gain some easy vert before the pushing began.

After getting used to the heavier-than-usual riding packs, we quickly set into a steady climbing pace and started to make some solid headway up the road. After reaching the start of The Edge we were in uncharted waters, as neither of us had skied at Craigeburn Valley before. This was one of the areas we had scoped on Google Earth, and from what we could tell, there was some sort of a track up to around 1700m. Luckily, Google prevailed, and we found ourselves pushing up a relatively moderate 4WD track. After a short windy push we pulled up to the deck of the day lodge for a welcome reprieve from the wind, and a hearty lunch. From there it was another short push to the saddle where we were dropping off. 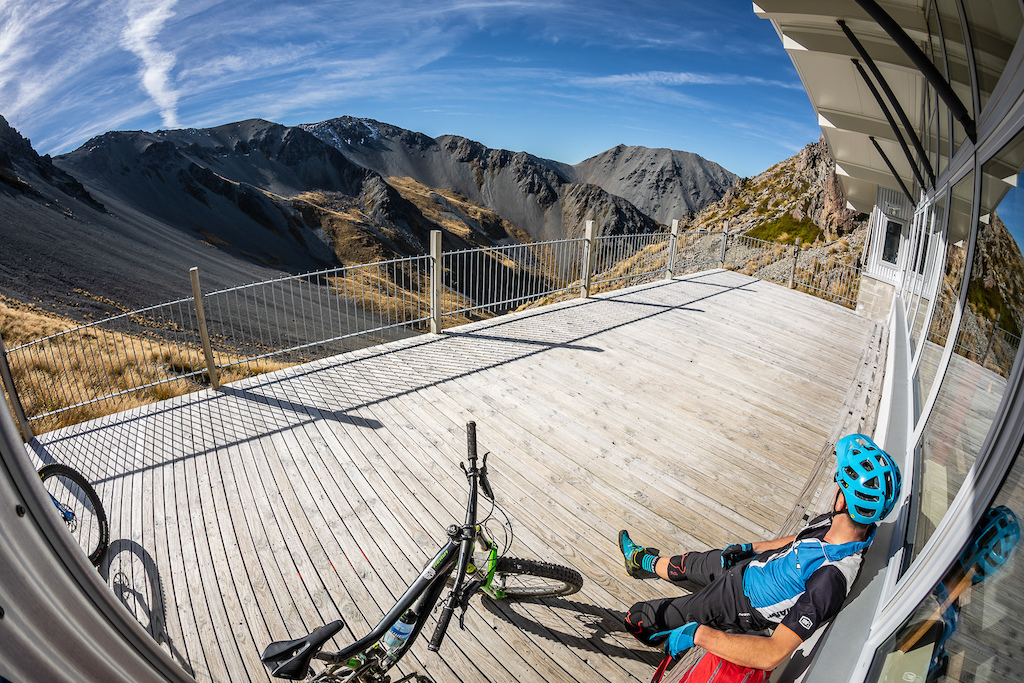 Stopping to take a break out of the wind and enjoy the view at Craigeburn Valley's day lodge. 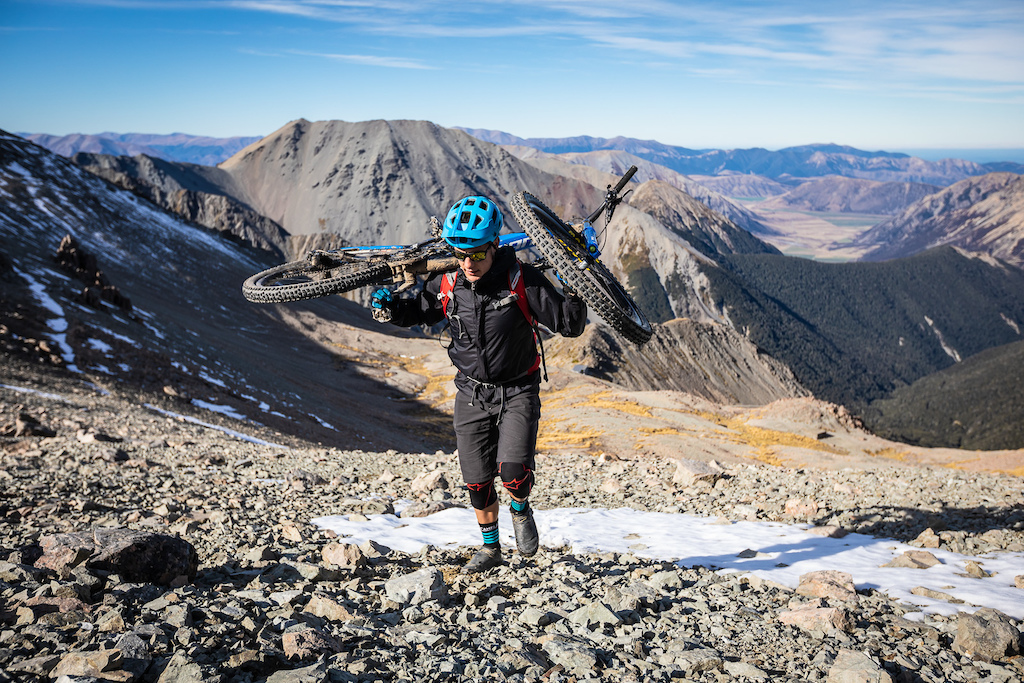 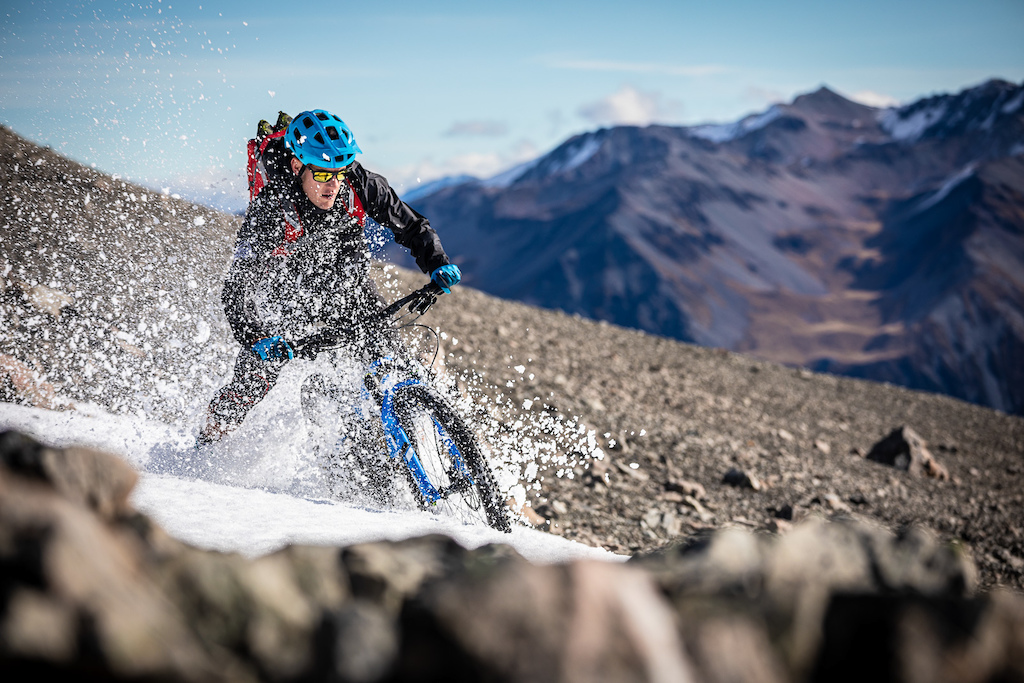 With one last scramble we were at the saddle and the start of what would become an hours descent.

The descent in front of us was the most anticipated moment of the trip, but was also the greatest unknown. Craig was fairly confident based on what he had seen, but there was still some apprehension in both our minds. Coming over the brow of the saddle, we collectively breathed a sigh of relief. The scree looked pretty good, gently rolling away down the slope. Wasting no time to get out of the wind, we swapped running shoes for riding shoes and dropped straight into the face. The first section was slightly too steep to be comfortable with fully-laden packs, so we cruised down, slowly building up confidence. Once past the crux of the face the next 5 minutes of riding to the saddle were awesome, with a scree gutter that dropped us straight onto the Cass-Lagoon circuit. We couldn't believe our luck! 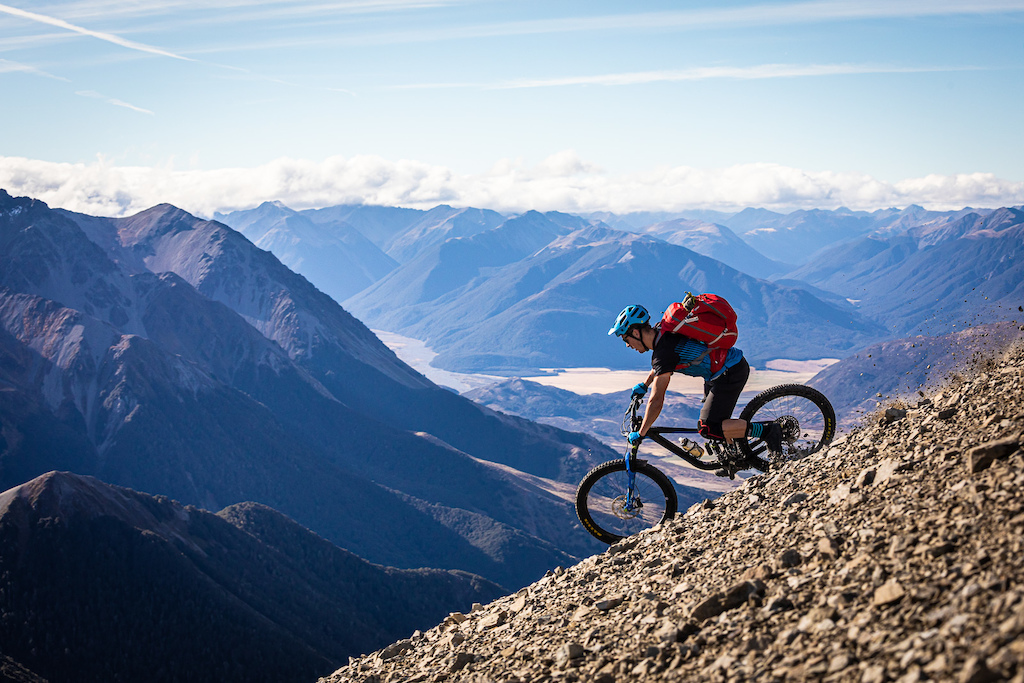 Looking up the Waimakariri towards Mt White bridge was a well-earned view. 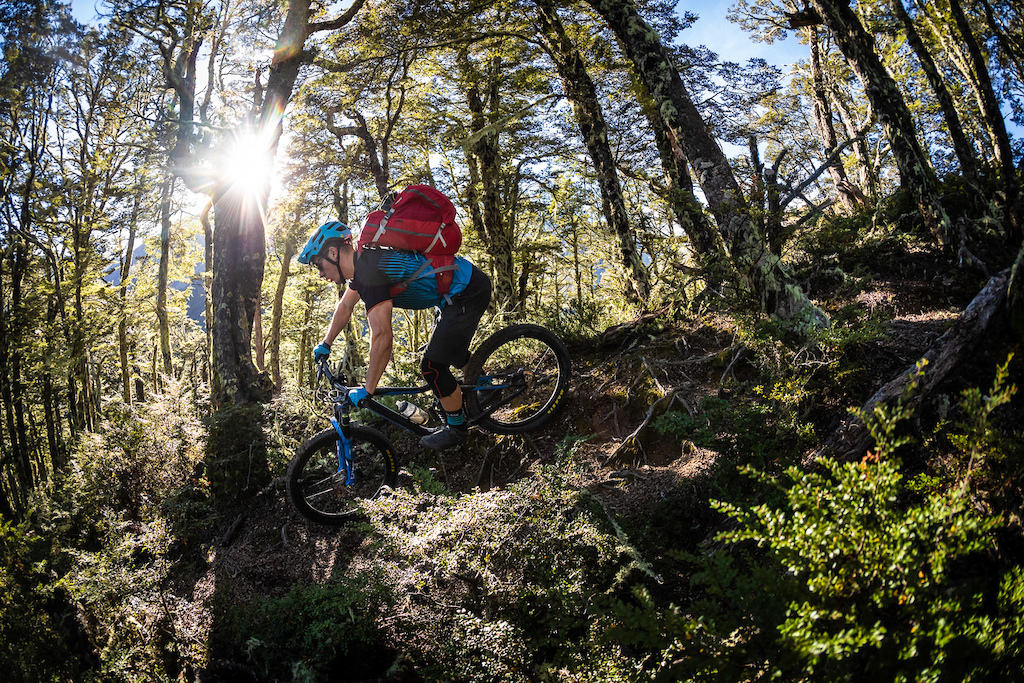 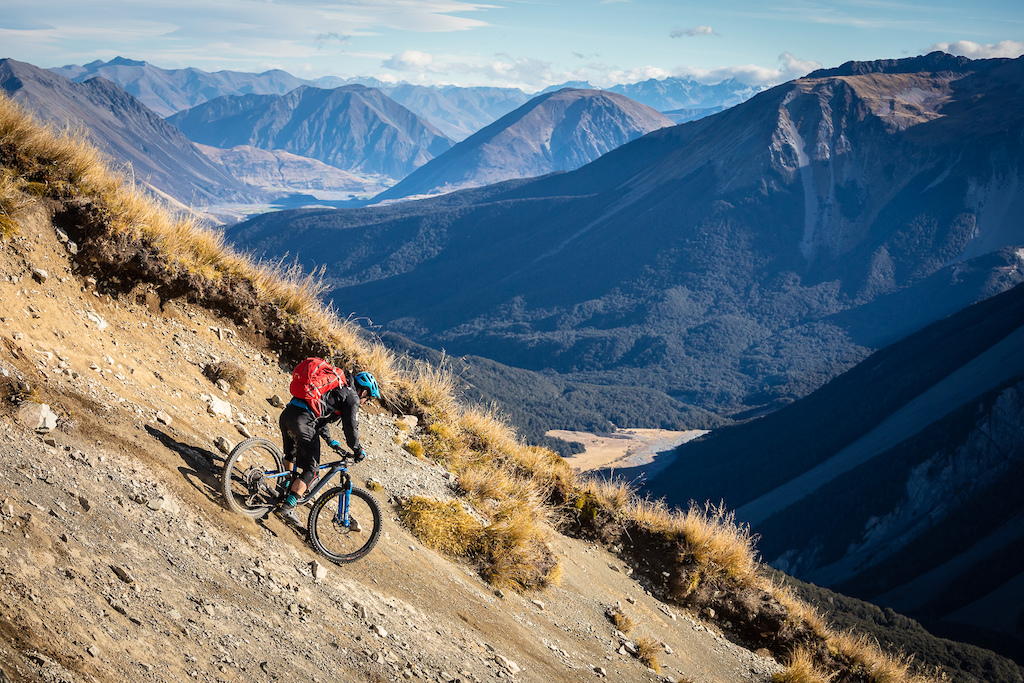 After an awesome descent down to the saddle, dropping into the treeline would have felt a little underwhelming if the trail wasn't as good as it was.

The next hour involved some of the best riding I have ever done in the New Zealand backcountry. Dropping beneath the treeline, a steep 15 minute descent from the saddle started things off well, with lots of gnarly roots and janky corners to work the trails skills. After the initial descent, the track opened up into a perfect mix of fast and wide beech litter, with some punchy climbs scattered in the mix. This lasted for around 40 minutes, until the track abruptly broke out onto a grassy flat leading directly to the hut. Getting to the hut took nearly an hour from the saddle, although it felt a lot less. With only one or two sections that required any sort of walking, the descent felt endless. 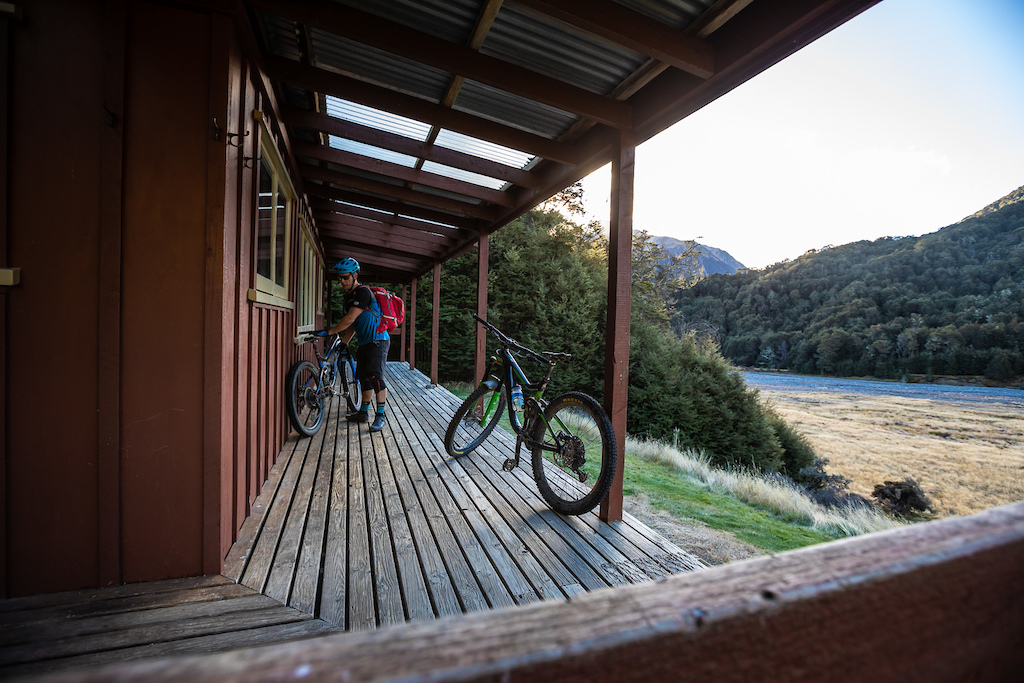 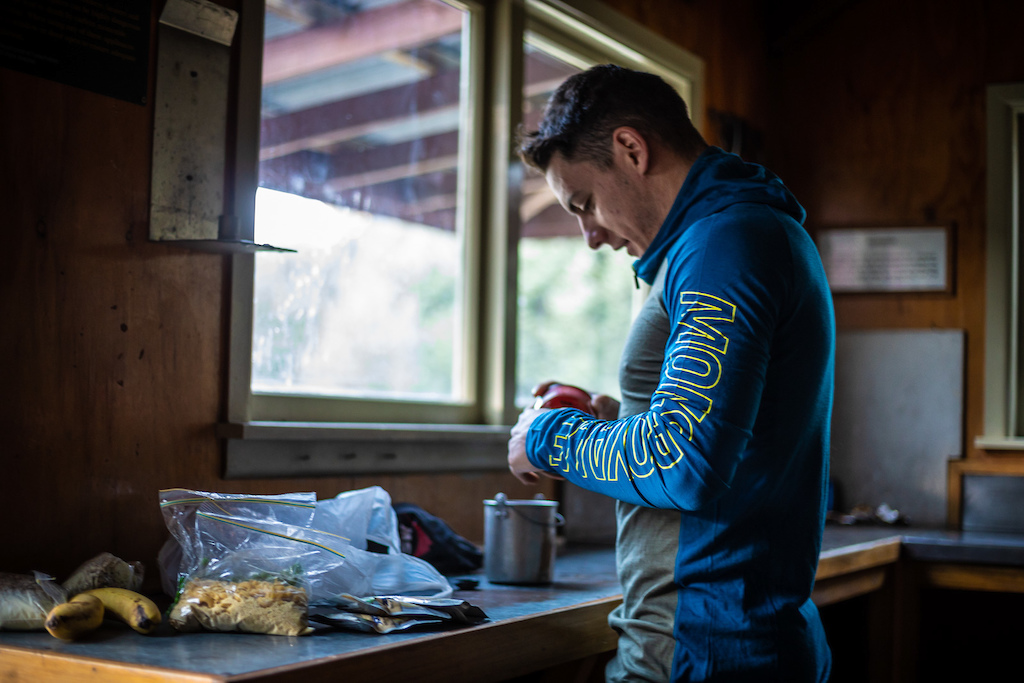 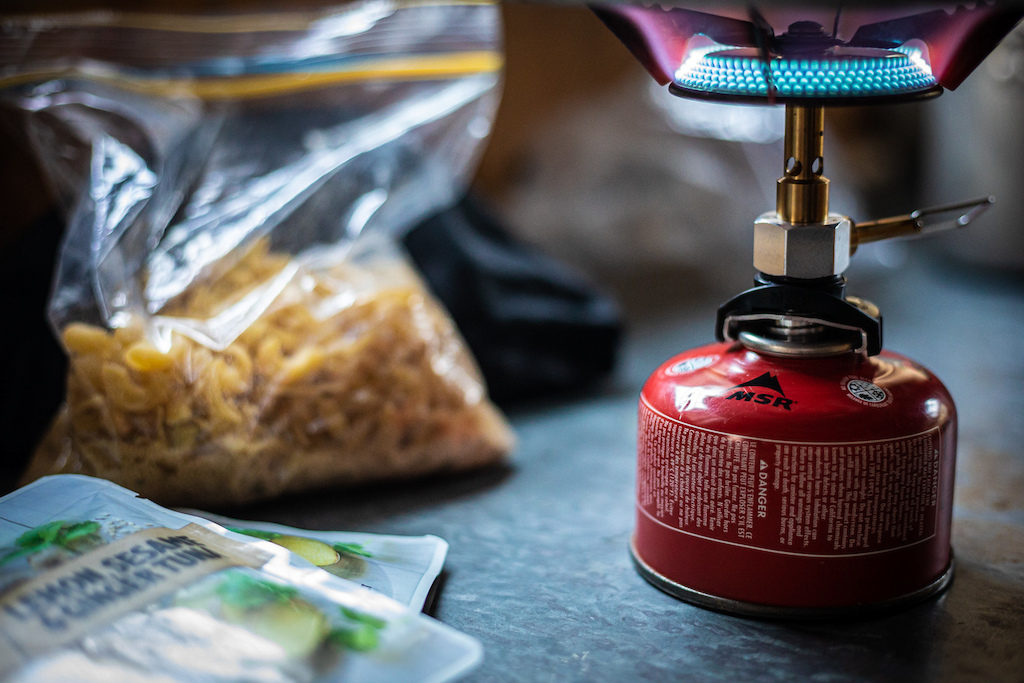 There is no better feeling than rolling up to a hut at the end of the day and been the only ones there. Pretty impressive for one of the busiest weekends of the year.

As we started to get close to the hut, we each had a guess at the number of people we would find inside. Approaching the hut, it appeared we were both wrong, and the hut was empty! We couldn't believe our luck, and quickly snagged a bunk room. Just half an hour after we showed up, we were joined by another party who had walked in from the South. Over a massive dinner of a couscous-alfredo-pasta-tuna franken-meal, we began hatching a plan for the following day.

Craig was dead set on climbing back up the way we had descended but I wasn't convinced. It wasn't until Craig described in detail just how unpleasant the valley walk out was with bikes that I grudgingly agreed. Even so, the prospect of a 500m climb up the face we had descended seemed a little ambitious. On top of this, there was an increasingly thick layer of cloud pushing in from the west, which we thought might make the high route too exposed. Eventually, we agreed that since we were out here, we may as well go for gold and get the most descending we could. With the thought of tomorrows climb playing over in our heads, we settled down for an early night to rest our legs. 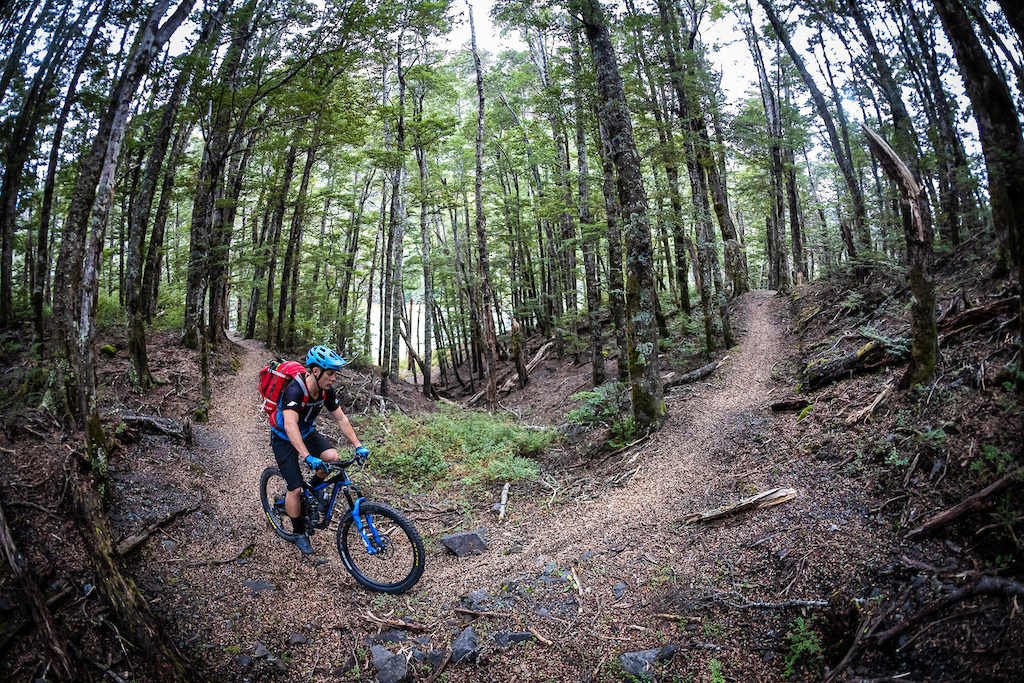 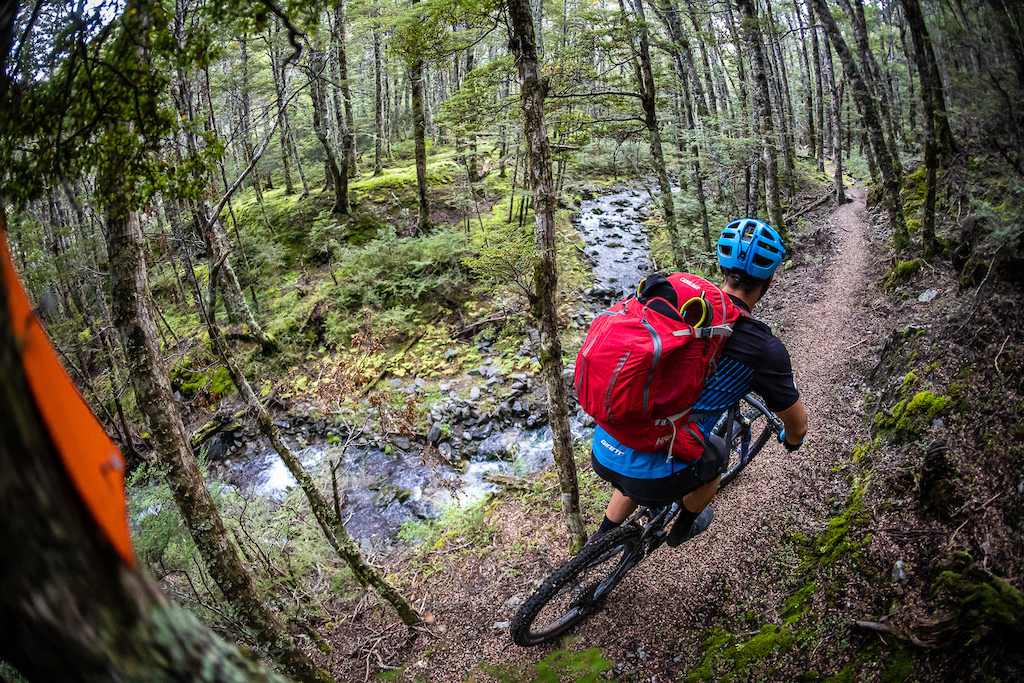 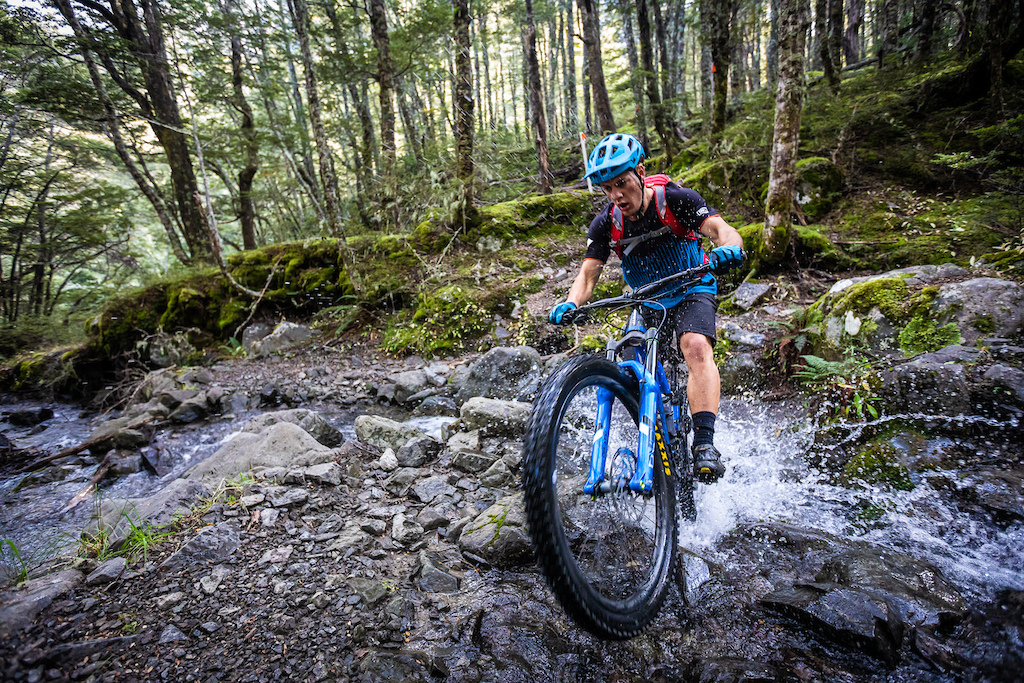 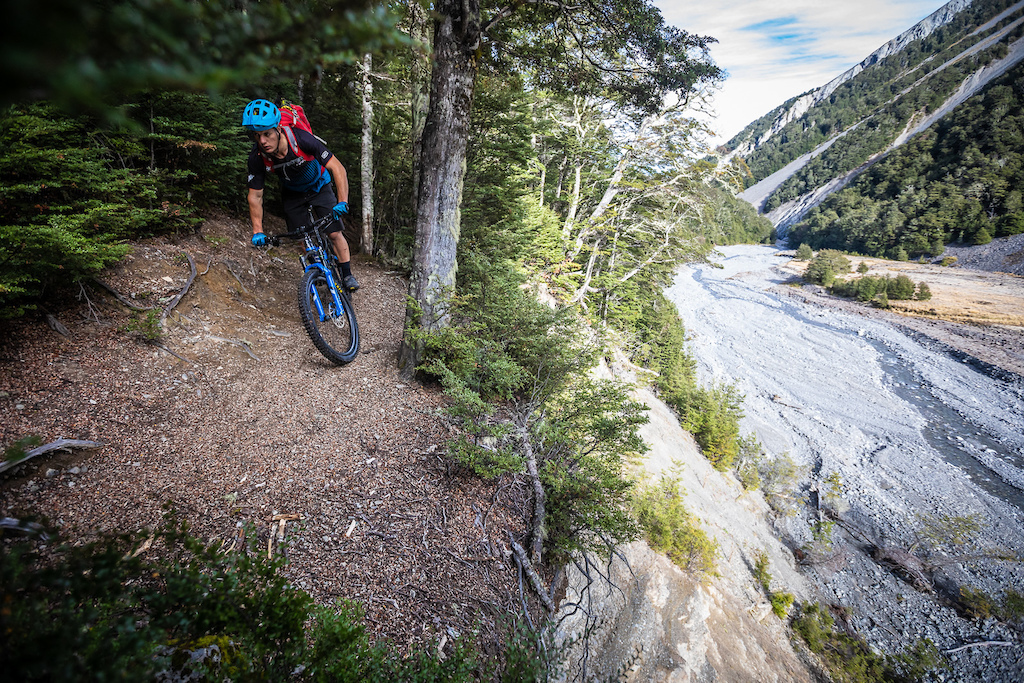 The valley track is more than rideable on the way out too, with a few punchy climbs to break up the steady ascent. Once you get to the base of Cass Saddle it's a short 15 min push to the saddle itself.

Waking up the next morning, the weather showed signs of clearing into the fine day we had been promised. Packing up and moving on early to have a good shot at making it back to a Sheffield pie, we started pedaling back up the valley. All I could think about was the massive hill we were about to climb. Reaching the bottom of the climb to Cass Saddle, we refuelled water bottles, and started the walk back up to the tussock. After a bit of grovelling, we made it to the saddle for lunch. We devoured nearly all the food we had left to make sure we wouldn't run out of energy. This was also helped by a few caffeine uppers that Craig had saved in his pack! 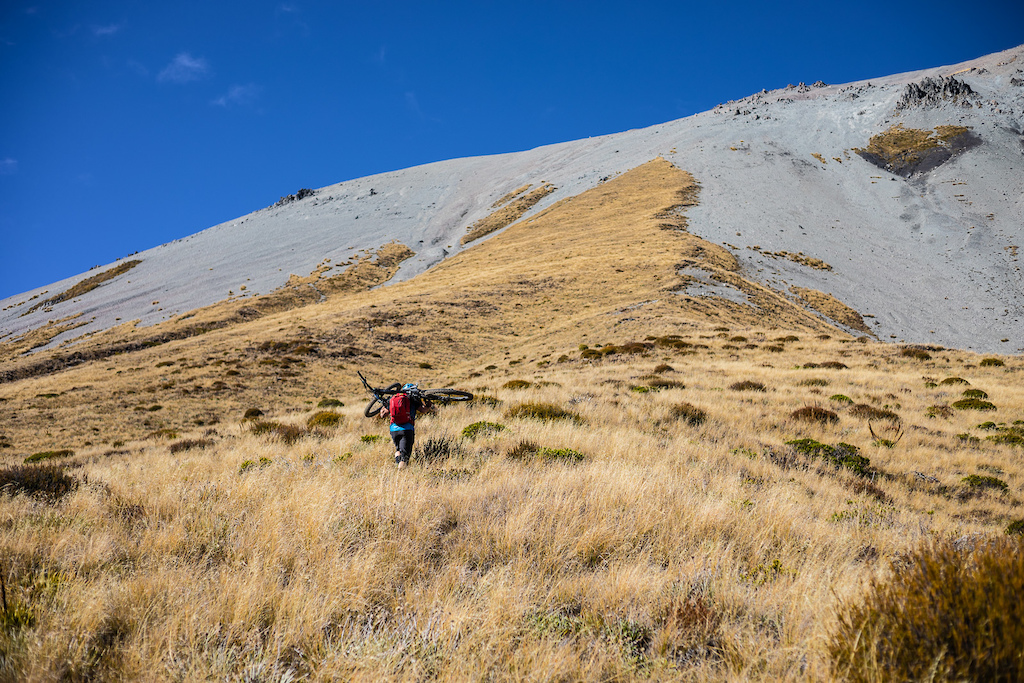 The grassy tongue we followed up only got us about 60% of the way up to the saddle beneath Hamilton Peak. It sure looked like it got a little closer at this point... 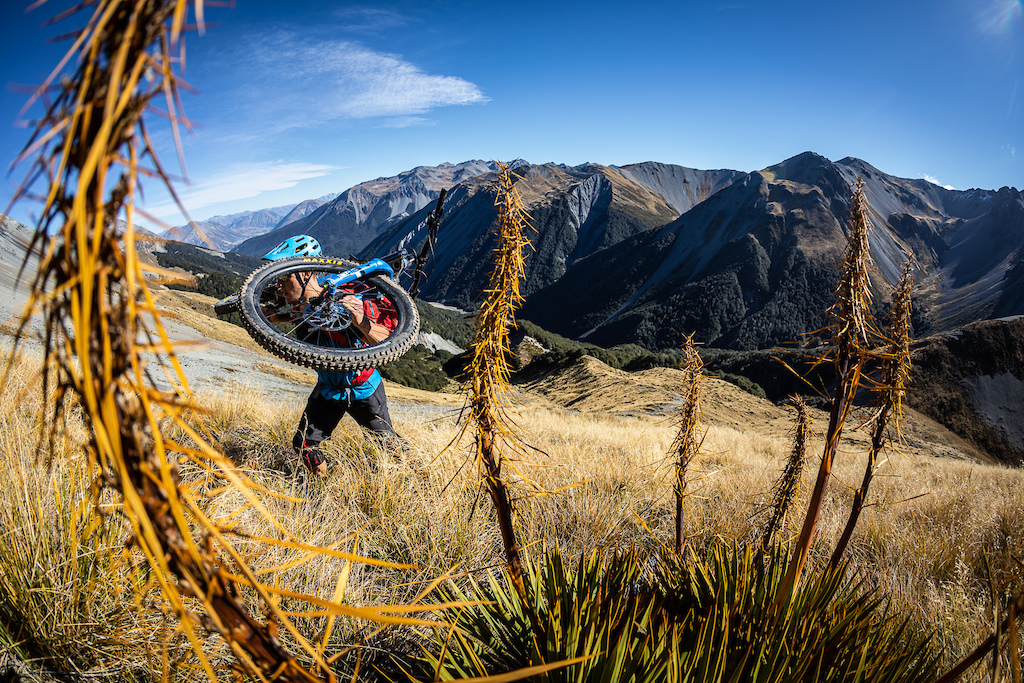 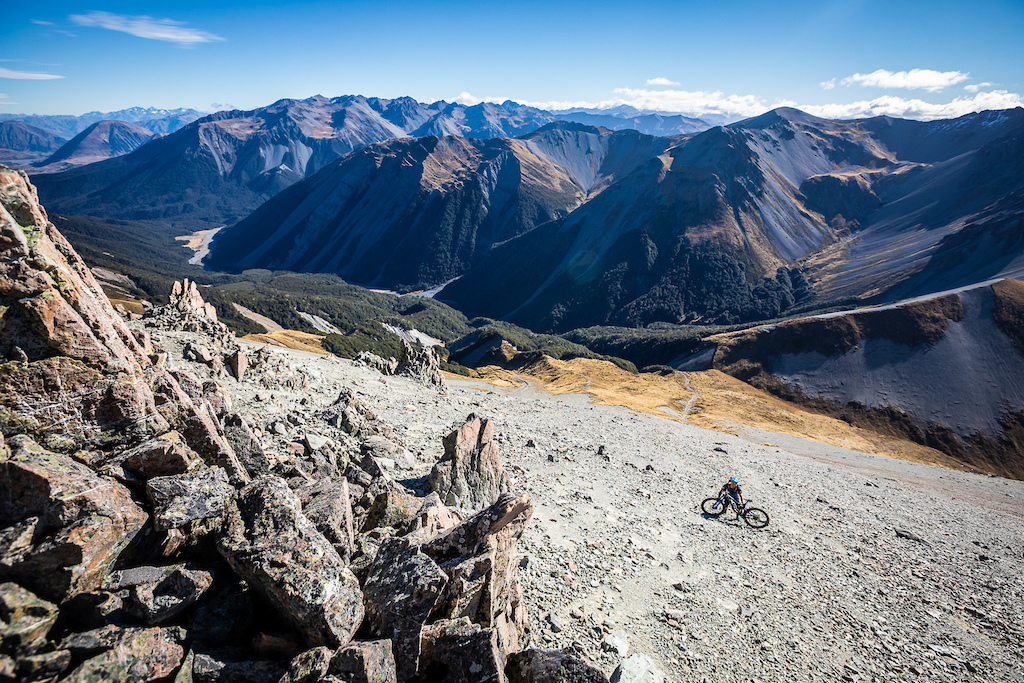 Walking up through the tussock was steep but manageable. Once we topped out into the scree however, it was two steps foward, one step back.

Climbing up through the tussock was easier than I'd imagined. Staying near the border of the tussock and scree, we made steady progress up the tongue, reaching the top in 30 minutes. After another fuel stop which included a lot of caffeine gels we started onto the scree. Unfortunately for us, progress was dismally slow, and a lot slower than we had anticipated. With no other option, we pushed on up the slope, experimenting with a variety of scree climbing techniques (for which the prevailing method was to use the bike to gain purchase further up the slope, pulling yourself up afterwards). After another hour, we finally topped out at the saddle we had descended from just the day before. 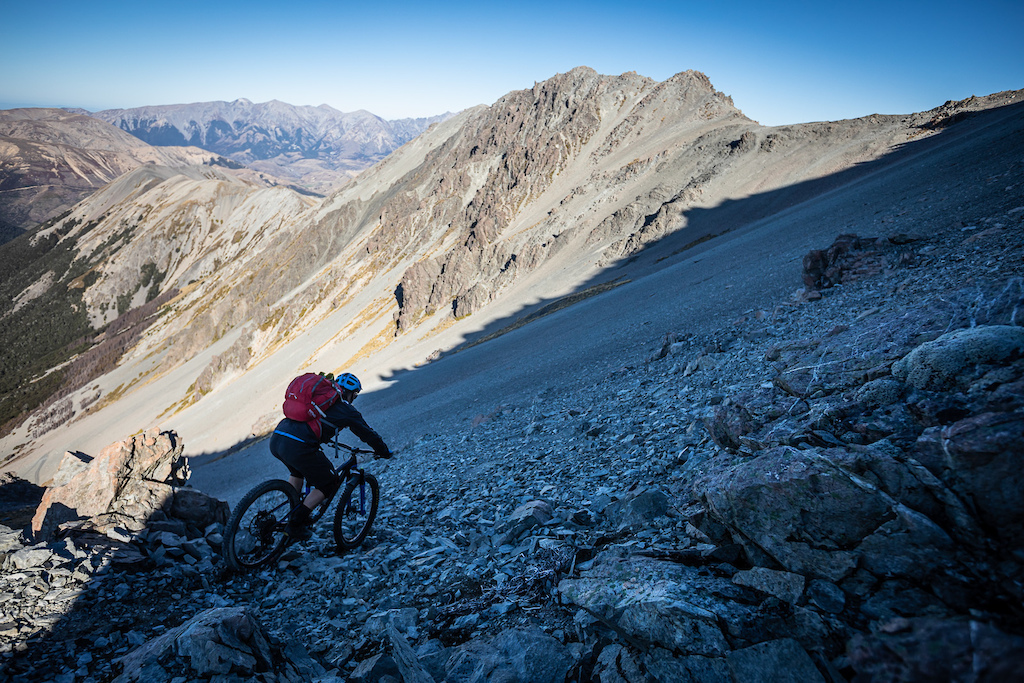 The final plan we had was hatched just the day before, starting as a joke but becoming serious rather quickly. Following a cat track around from the top basin, we popped out at the top of a huge slope, and weren't really sure what we had gotten ourselves into.
On the way up through Craigieburn Valley the previous day, we'd had ample time to take in the massive face beneath Hamilton Peak. Before too long, we started joking to each other that we should ride down it on the way back. Overnight this morphed from a joke into a challenge to each other. Neither of us cracked, and so we found ourselves standing at the end of the ski field cat track looking out across a massive scree field. Dropping in, we found it was remarkably rideable. Aiming for the other side of the valley, we descended quickly down through the top half of the slope. Rounding some bluffs, we entered the lower half of the slope, which produced some incredible riding. It would be an absolutely wicked descent with a downhill bike, and even on the trail bike with a loaded pack it was still a lot of fun. The last few hundred metres to the road were absolutely sublime. 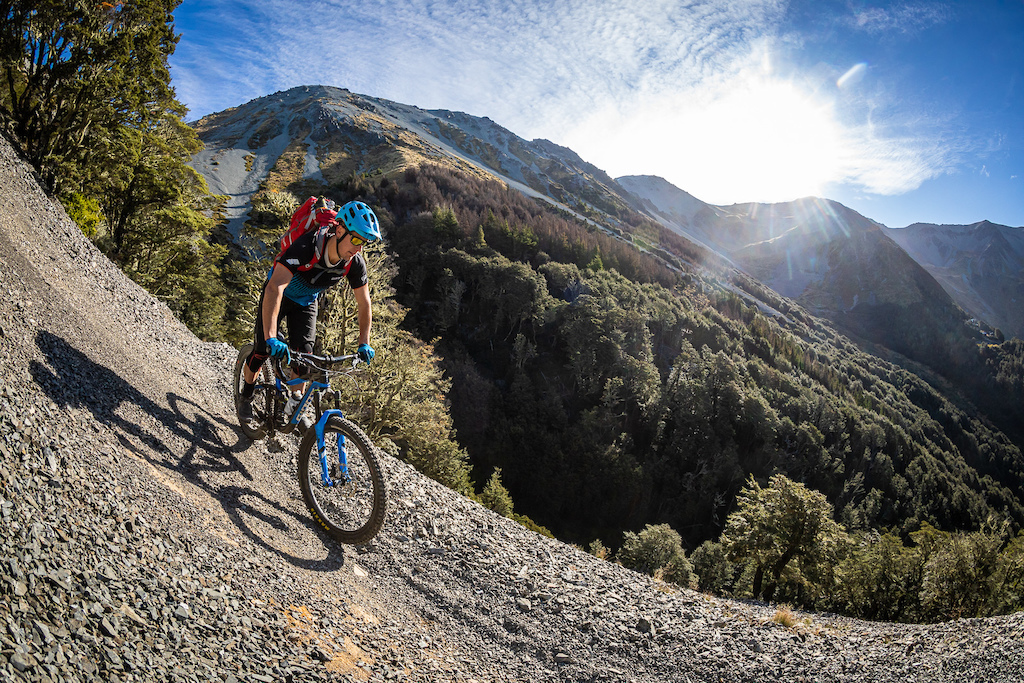 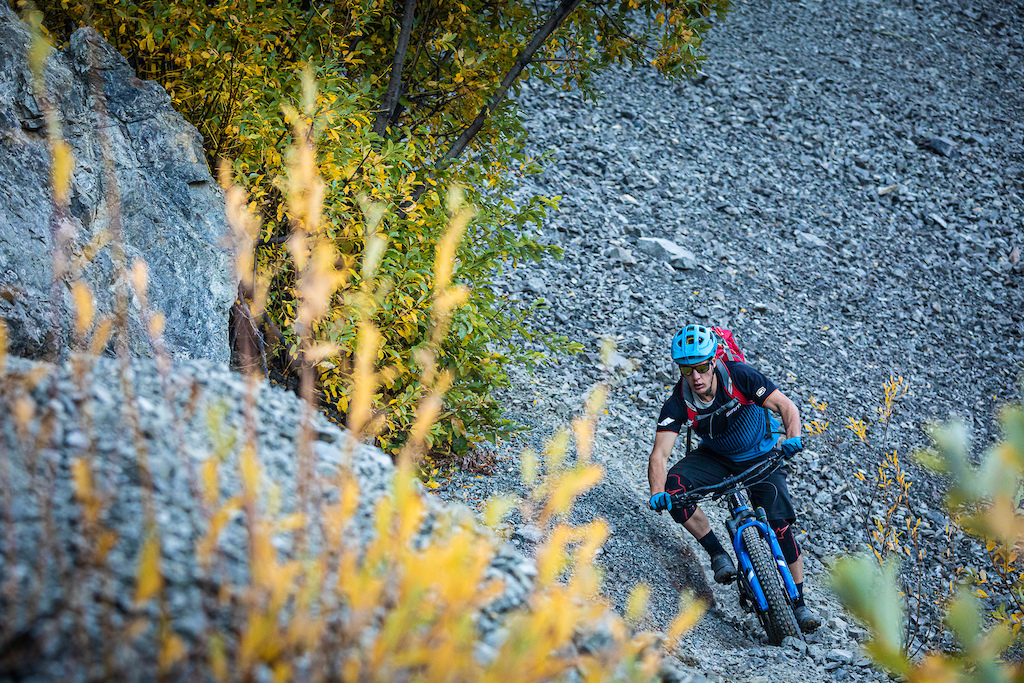 Finishing off the last of the day's vert on Edge was a perfect way to cap off the weekend.

The last order of the day was dropping back to the car. Of course the only way to do this was by dropping down The Edge, a Craigeburn classic. After another 15 minutes of hooting and hollering, we dropped back out onto the access road. With just a short coast down the hill to the car, our weekend was nearly over. Racing back over Porters Pass to make our pie cutoff, we faced our biggest disappointment of the weekend as we were minutes too late to get a Sheffield pie!

Tykebike (Jun 25, 2019 at 0:26)
Thanks for brightening up a dull wet morning in Sheffield, England. Of course during our visits to the South Island we had to call in at Sheffield but have to say that we didn't munch a pie there! Our favourite munchtime was for one of Geraldine's muffins!

RickArmstrong (Jun 25, 2019 at 7:18)
Brings back good memories of riding that part of NZ. Cant beat that beech forest single track!

worldrider (Jun 26, 2019 at 15:35)
one of my favorite rides, unfortunitly I last got up there at xmas and wont get another chance this summer