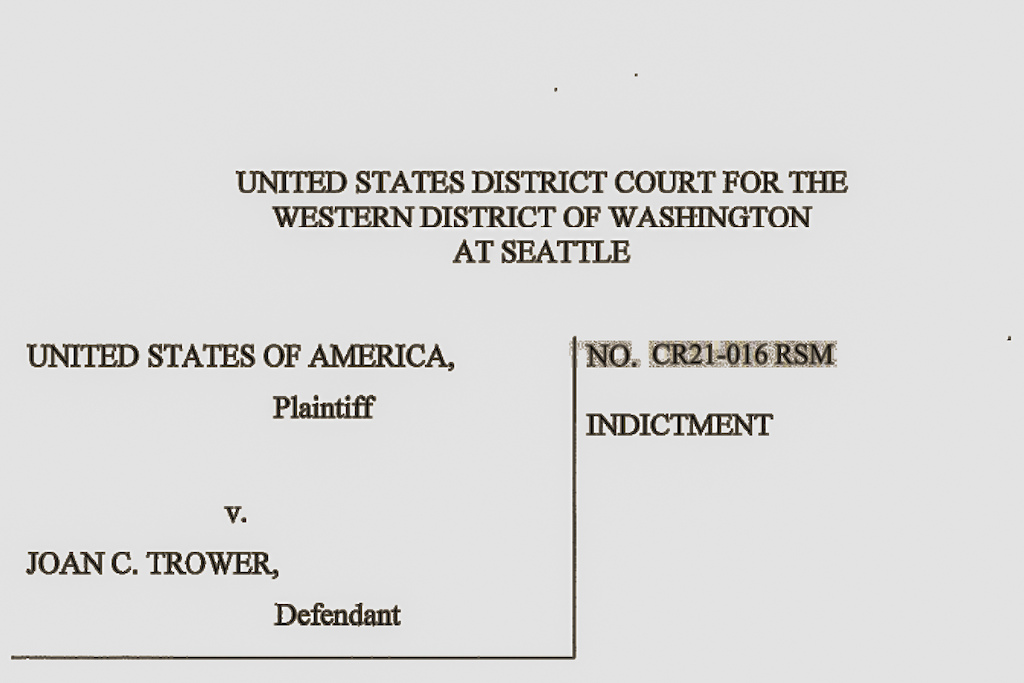 Bicycle Retailer reports that a Seattle bookkeeper was indicted for nine counts of wire fraud, four counts of aggravated identity theft, and one count of destruction of evidence after allegedly embezzling more than $200,000 from a Seattle-area bike company.

Prosecutors said the bookkeeper, Joan C. Trower, 50, forged checks from the company’s accounting software to herself and people she knew, among other schemes. The fake checks totaled $188,000. The indictment also said she transferred at least $26,000 to a fake accounting firm she created. All in all, the indictment said the cost to the company was between $200,000 and $300,000, which she used in part to gamble at local casinos.

The indictment does not specify which bike company is involved, only that it is “a private company that manufactures and sells high-end mountain bikes and related accessories.”

Trower worked for the company on contract from 2015 until her embezzlement was discovered in 2018, according to the indictment. She was arrested Feb. 5 and released on bond with a set of conditions, including a prohibition against gambling.

We have reached out to all the major Washington State bike companies for comment. Kona and Transition have both said it isn’t them. Evil has declined to comment.

This story will be updated as more information becomes available.

i-like-toytles (Feb 8, 2021 at 18:49)
This story is sure to have a big Following soon. I am Wreckoning there will be some sort of financial Offering back to the company as the legal pursuit presses on. I sure hope that woman gets a hold of herself and finds her true Calling in life. If I were in her position I would be Blackout Drunk at those casinos.

kylext (Feb 9, 2021 at 7:42)
@ATXZJ:
On page three of the indictment it says she forged the signature of the company’s COO, initials J.M.
Evil’s COO has the initials J.M.

kylext (Feb 9, 2021 at 10:31)
@kinematix:
Oh that’s a good one! I only recently joined Pinkbike because I was looking to buy my first full suspension bike I did end up buying an Evil Offering frame.

geephlow (Feb 8, 2021 at 20:04)
There's always the nice middle-aged bookkeeper lady who's been working there for like 10 years, brings cookies to the office every Friday and has pics of her grandkids and cats on her desk. And meanwhile, she's robbing you blind and blowing it all on blackjack and coke.

fullfacemike (Feb 8, 2021 at 21:23)
Hey someone's gotta blow all my money on blackjack and coke, and whoever's bringing cookies for everyone deserves to a lot more than I do.

PHeller (Feb 9, 2021 at 7:43)
To be fair to book keepers, my MIL being one with a client who makes the entire bike industry look like the poors, very few of them are shady swindlers. The problem is a lack of accountability. You always need to two people to check eachother's work but not know it.

shredddr (Feb 9, 2021 at 9:14)
@PHeller: separate bookeeper from the banking duties is a starting point

geephlow (Feb 9, 2021 at 10:31)
@shredddr: Or make Gladys finally take that two-week vacation in Hawaii she's been talking about for years so you can have someone else looking at the books. This really is how most of these embezzlement cases are discovered.

Fektor (Feb 9, 2021 at 4:15)
In the criminal justice system, bicycle based offenses are considered especially heinous. In the Seattle city area, the dedicated detectives who investigate these vicious felonies are members of an elite squad known as the Special Victims Unit of cycling related felonies. These are their stories. "Dom Domm"

joelsman (Feb 8, 2021 at 18:53)
Dang that sounds so familiar to a machine shop I worked at in Bellingham, bookkeeper did the same thing writing checks to herself and she was actually taking money from my paycheck as well. She also gambled it away at casinos...my boss pressed charges but I don't know what happened to her.

jaytdubs (Feb 8, 2021 at 21:10)
Its a sad fact that addiction is a present factor in most cases of defalcation, and even worse is that these type of frauds disproportionately impact small businesses that often struggle to stay afloat to begin with.

There's not really a casino culture in the UK. Gambling addiction has traditionally been a male issue and takes the form of betting in the local bookies.

Over the last few years there does appear to be an increase in news stories such as these involving women addicted to online gambling.

Not sure how popular it is in the rest of the world, but online bingo (along with chance games and slots) has gotten huge here. The advertising is hugely cynical and aimed at women specifically. They market the websites as a 'community' where you can meet, chat and play games with your friends (or make lots of new friends in it). The advertising is broadcast on programmes or at times where a large demographic of stay-at-home or part-time-employed mums will likely be watching, trying to capitalise on lonliness or boredom.

The result is the same as above. Become addicted to gambling. Get into debt. Steal money (acounting fraud is a common theme, but borrowing from friends and family on false pretences happens a lot too) to try and clear debt but also feeding continuing gambling.

It's a very sad thing to see. It's easy to villify the culprits. But it's hard not to have some sympathy when the gambling industry is being so blatantly exploitative.

I also take issue with online casinos/bookies that are mainly aimed at a male audience, especially sports-related advertising that advertises betting as 'part of the action' and creates a psychological link between watching sport and betting to make you feel 'more involved in the game'.

I should say that all of the above is based on my own observations and from reading news articles, i have no real insight or experience on the topic (other than feeling quite strongly about it).

JustinVP (Feb 9, 2021 at 10:17)
My best mate growing up developed a gambling addiction about 15 years ago, and still hooked in a bad way. It sounds like it's just as hard to kick as a heroin or meth habit. He says 70% of the people in the local casinos are familiar faces to him and are in the same addicted trap he is. Pretty nuts.

tremeer023 (Feb 9, 2021 at 11:31)
@JustinVP: Same here. Ruined my friend's marriage. I'm not Into gambling at all but get so annoyed with the amount of advertising rammed down our throats - it's everywhere and so easily available online. Gambling addicts don't stand a chance.

DidNotSendIt (Feb 9, 2021 at 12:03)
@JustinVP: I'm very sorry to hear that. From what i've heard, the addiction indeed incredibly difficult to kick. Given how big the casino industry is on your side of the pond, i imagine it holds a lot of political influence which helps them resist legislation.

I believe there are some ongoing reviews of the gambling industry here. Betting is quite common here but i don't think there's a strong enough culture that would result in major public pushback on any tightening of regulations. It's the online casinos and gaming that concern me the most. Particularly the way it's advertised - like the example in my comment above where they blatantly and purposely target time-poor mums that miss their social circle.

I mean alcohol adverts are mostly nonsense - good looking trendy people doing stuff that nobody ever really does. But imagine if an alcohol brand blatantly and puposely targeted people they considered predisposed to addiction problems!

vondur (Feb 9, 2021 at 17:02)
de·fal·cate | dəˈfalkāt, dəˈfôlkāt |
verb [with object] formal
embezzle (funds with which one has been entrusted): the officials were charged with defalcating government money.

Poulsbojohnny (Feb 9, 2021 at 8:53)
@nosmallplans: And Transition and Kona are Bellingham, not Seattle. Probably Evil, but could be Ti-cycles.

Sirios (Feb 9, 2021 at 0:41)
Geesh , what's going on in the bike industry . First we heard about the theft of some prized Specialized bikes , then their offices burn down and now a massive embezzlement of another company . What's next , we order a new bike and it doesn't get delivered for a year or so . Oh wait ,,,,, ,,,, yeah literally wait .

LanceGT4 (Feb 8, 2021 at 19:07)
When I bought my Insurgent there was a bogus charge the next day. I thought it was just sloppy paperwork cleanup.

Jvisscher (Feb 8, 2021 at 19:24)
One of my business professors from college in WA did this as well. Half a million from the company he was bookkeeping for. Not surprising for anyone who knew the guy and took his classes. And I knew the business owner.

Because I did, and a professor in the business department stole over $800k from a local dentist that he was doing accounting for on the side.

jeredbogli (Feb 9, 2021 at 9:59)
I came here for the Puns and y'all did not disappoint. My Tuesday is better now. Can Pinkbike pun masters please head over to BikePortland and over run the comments there with puns.

onlyDH (Feb 9, 2021 at 11:16)
That’s unfortunate. At least it’s not a huge amount, and hopefully the funds are still recoverable

My dads accountant stole $5m from his business over the course of a few years. My mom conducted an audit, and the guy had already moved the money to the Virgin Islands. He did 8 years in prison, his family is living in the Islands, and he’s now dead.

Strangebrew (Feb 9, 2021 at 10:59)
The HR manager for an old company I worked for stole over a mil by keeping terminated employees on the payroll and setting up direct deposits to bank accounts she controlled in the name of the employees.

machchicken (Feb 10, 2021 at 13:28)
This goes a little way to explaining why EVIL does not support the bikes they make.....My dogbones and dead Undead frame must have been part of the missing fund fiasco.

Chuckolicious (Feb 9, 2021 at 8:46)
That swindling bookkeeper who bamboozled me out of my dough is going to the hoosegow for a month of sundays!

Struggleteam (Feb 9, 2021 at 6:17)
This is why my book keeper owns stock in my business. If you gonna rob me you gonna have to rob yourself too!

Struggleteam (Feb 9, 2021 at 6:56)
@Groov-E: She's my business partner and our CFO. You're far less likely to steal when you have skin in the game. You point out all the positive sides of business ownership but not the risk involved.

Lankycrank (Feb 9, 2021 at 8:56)
@Struggleteam: You're right, but still a good idea to have your books audited by an external party... Not all mishaps are intentional. :-)

Struggleteam (Feb 9, 2021 at 10:02)
@Lankycrank: Oh we have a third party audit once per month as well. I've seen this story so many times in so many industries. Always seem to start small and then before you know it........

a-r-c (Feb 9, 2021 at 13:29)
So some lady cooks the books and everybody involved has a meltdown, but the industry gets away with charging 10+ grand for a bike with xt/slx and nobody bats an eye. Who is the real criminals here?

mi-bike (Feb 8, 2021 at 22:36)
@MillerTFb if you dont like it why don't you contribute something meaningful instead of this sob story.

Maybe from being on Zoom so much myself lately.