Oliver Watson has sent what he claims to be the biggest drop in the UK. At around 35 foot down with a sniper landing it's definitely a sizable huck and a bit of a throwback at the same time. It's probably not the most sensible thing to be doing given the pandemic situation in the UK but impressive nevertheless. 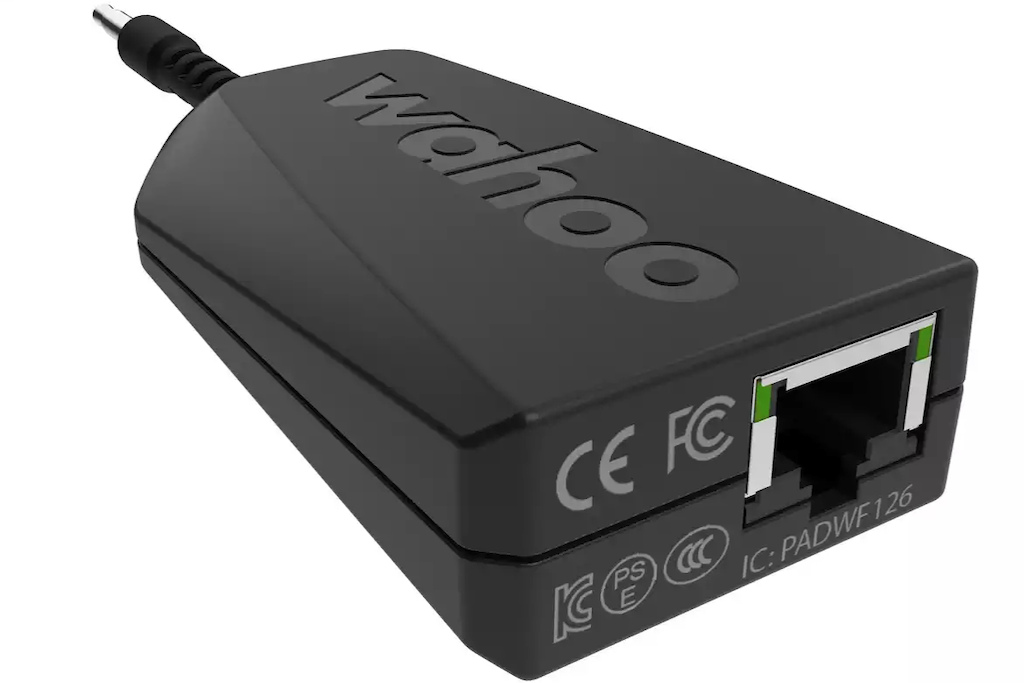 Wahoo has announced the Wahoo Direct Connect Accessory that is designed to ensure a rider's training session isn't interrupted by a dodgy wireless connection.

The wire allows riders to connect their Kickr training bike to the internet using an ethernet connection as opposed to the traditional wireless set up favoured by most trainers. This physical connection should make the signal between the trainer and the internet more reliable and less susceptible to drops, especially for city dwellers whose environment is crowded with other radio frequency signals.

Tyler Harris, Wahoo Kickr Product Manager, said: “While a wireless connection works very well for most riders, those who have connectivity challenges, or those who simply cannot risk a dropout during an important race or workout will be able to ride with increased confidence and reliability by using Kickr Direct Connect.”

As of today, Wahoo’s SUF Training, TrainerRoad, FullGaz, and RGT Cycling are the training programs compatible with the Direct Connect while other platforms are expected to become compatible in the coming months, including the all-important Zwift. The only trainer hardware the wire will work with, however, is Wahoo's own V5 Kickr, not the Kickr Core, Kickr Snap, the Kickr Bike, earlier versions of those products or trainers from other brands.

While the value proposition may be questionable, indoor training is a big part of many riders' off seasons, especially during lockdowns, and virtual racing is becoming increasingly popular with the World Championships running for the first time last year. If you've already spent $1,200 on a trainer and can't get a consistent connection, this will no doubt be a welcome, if costly, addition to many a rider's training set up.

DJ'ing Interrupted by a Bear

Jody Flemming had a close encounter of the furred kind last year when he was joined by a black bear during a livestream. Flemming, 50, was performing at home in Ashville, North Carolina, when the bear wandered by and was separated from him by just a screen door. Flemming turned around apparently thinking it was a neighbour at the door but went to grab his phone for a photo when he saw the animal. Soon after a car pulled up, the bear moved on and Flemming finished his set.

Bec McConnell Hit by a Kangaroo 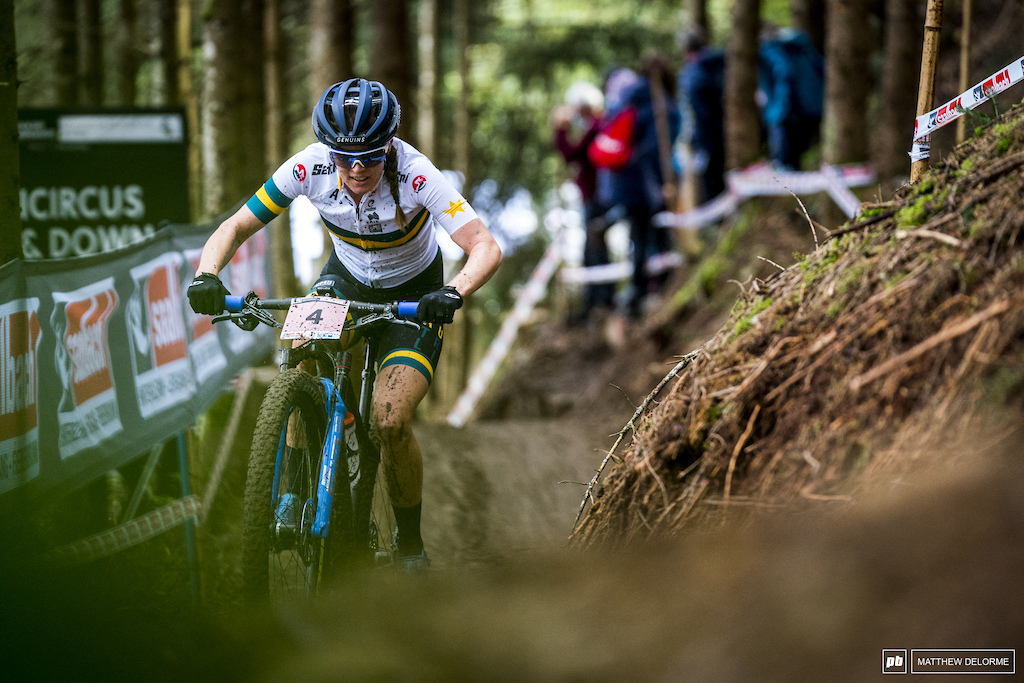 Another week, another kangaroo close call in Australia. This time there's no footage of the incident but World Cup XC rider Bec McConnell has reported colliding with a kangaroo while racing at Mt Stromlo this week. She posted on Instagram: "I was racing the local road Criterium and one of the locals (Kangaroo) decided to jump onto the track. Next second I was sliding on the road. Major pain is my [peach emoji], it took the whole impact. It all happened very fast. I think I will be very sore tomorrow. But very lucky" 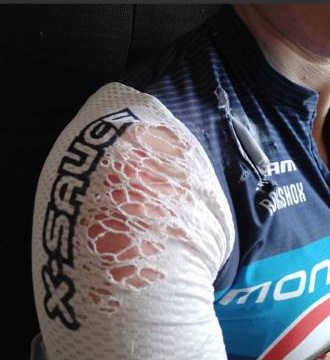 
The Squirrel picnic tables are real by the way, and you can buy one, here.

New Zealand Asks People to Not Travel Under the Social Influence

adrock-whistler (Jan 30, 2021 at 7:41)
So happy to see Jason and Jess are still together. We need more videos from the IFHT Cinematic Universe.

• Oakley has launched Oakley MSK3, a mask designed to work seamlessly with eyewear and fit snugly on the wearer's face.

• The UCI and its partner Santini launched a collection in the rainbow colours of the UCI World Championships, available exclusively at Decathlon.

slayersxc17 (Jan 30, 2021 at 4:05)
Watched the DJ jam sesh, and immediately thought, sounds like something that would happen in Asheville. And turns out, Asheville. Friendly big squirrels

steezysam (Jan 30, 2021 at 6:07)
it's the most Asheville thing I've ever seen. The bear was just dropping off some of his new batch of kombucha

j-t-g (Jan 30, 2021 at 23:21)
$100 for that wahoo thing? That's moronic. If it has wifi and is big enough, it should have a ethernet port. Full stop. The designers who built this thing are unbelievably stupid for foregoing such a feature, and so is everyone who needs to buy such an object.

luckynugget (Jan 31, 2021 at 22:17)
big sends cure coronavirus so I don't think there's an issue with sending that drop right now. Is it really a throwback if people never stopped going big? you just stopped paying attention.

tacklingdummy (Jan 30, 2021 at 12:42)
Squirrel picnic tables are hot right now. Sold out everywhere. Harder to get than YT, Vitus, or Canyon.

rabidmonkfish (Feb 2, 2021 at 14:28)
laughed at the ebike advert but i think this ones better
www.youtube.com/watch?v=yotOZVELSMc

pedalrepair (Jan 30, 2021 at 3:07)
Kangaroo jump ins are no joke! I used to ride Stromlo mountain all the time when I lived there and I bet know exactly where that jump in happened

KavuRider (Jan 31, 2021 at 7:26)
That eBike commercial was awful...
(not against eBikes for the record, although a commercial like that might change my mind)

DoubleCrownAddict (Jan 30, 2021 at 8:16)
The hot dog leg shots are popular cause with just a sun tan and her camera, any girl can make her legs look appealing despite how fat and out of shape she is, or how big her cankles are.

fwiw, all the "THANKYOU NHS!!!11!!!" propaganda is really hilarious here. The goddamned government patting themselves on the back, and paying for it with your tax money. disgusting

sherbet (Jan 30, 2021 at 8:33)
There's been literature explaining why taking risks during a pandemic isn't a great idea, and it's been circulating for almost an entire year. At this point I have to assume you're trolling for responses, not an actual explanation. You'd have to have slept for the last ten months to miss the news.

sherbet (Jan 30, 2021 at 8:41)
I'm not going to debate this one, go hit up several thousand different medical and risk assessment studies. If you don't get it by now, you never will.

sherbet (Jan 30, 2021 at 8:50)
No, I get it, just no longer going through the motions. The information is available if you seek it, but you're looking for an argument, not an explanation.

CircusMaximus (Jan 30, 2021 at 8:56)
@sherbet: are we speaking the same language? I’m NOT debating you. I am simply stating that ALL mountain bike riding is risky behaviour. I don’t need to read “thousands of studies”. Sheesh. Btw I’m off to ride soon. No time for “studies” today. Cheers

platnum (Jan 30, 2021 at 9:27)
@conoatFor sure, because the medical system isn’t already taxed enough with Covid-19. Pull your head out of your self righteous ass!

CircusMaximus (Jan 30, 2021 at 9:33)
@sherbet: word? Fact: flow and jump lines (as in what most inexperienced riders ride) account for the majority of mountain bike injuries. Just ask the Doctor from Whistler. Go look it up. You’ll get there. Too bad you have to sport your holy than thou attitude. Plus, I thought you weren’t going to debate this one?

also, as the point has been made, I would still like you to answer the following:

what is more dangerous/potentiall taxing for the health care system? 1 guy doing one high risk move once, or 100,000 brand new riders?

platnum (Jan 30, 2021 at 11:01)
@conoat: I recently had a one week stay in the hospital for a condition completely unrelated to COVID-19,and yes saw it with my own eyes. When I went into emergency I tested neg. Ten days later I was positive. Hospitals ARE NOT where anybody would want to be right now whether for good reason or for something related to a high risk activity. 1 guy doing a high risk move may motivate others just for clicks on social media. Again, pull your head out of your ass.

sherbet (Jan 30, 2021 at 12:51)
@CircusMaximus: See, there it is. You desperately want this soapbox, you ain't getting it. As said, there's plenty of good literature out there explaining in great depth why you are incorrect. Go look it up instead of trying to bait arguments about healthcare on a cycling website.

conoat (Jan 31, 2021 at 2:13)
@sherbet: the cycling website is the one doing the baiting, with the eluding to a health care issue while reporting on cycling. so if anyone needs to get off their very tall equine, it's you.

platnum (Jan 31, 2021 at 9:23)
@conoat: well I was positive, truly. One of the worst flus I’ve had. Two weeks locked in my room sucked too. And you really got eight tests in five day? f*ck they hand out tests like Halloween candy across the pond. Trick or treat all day long!
My wife works in a surgeons office and was tested four times over the same two weeks, they told her to go away unless she presented symptoms because she was part of the problem, wasting time and resources. Hard for me not to smell bullshit.

conoat (Feb 1, 2021 at 1:38)
@platnum: you get what you pay for. tests aren't at scarcity levels. at all. there are piles of tests. I wanted to prove a point about the efficacy of said tests. I have all the results and time stamps if you want to see them.

it's all horseshit. the number of positives are wildly wrong. my first "positive" they wanted to stop and mark it down(I am sure I still went in as a confirmed case for the stats). I made them keep testing.

Sasquatchumus (Jan 30, 2021 at 4:51) (Below Threshold)
Yeah pretty sad to see the "if it's old it's probably broken, you don't know how to fix it, put it in the bin and buy a new one" mentality with e-bikes. That's a lot of lithium going back in the ground 5 years after it was taken out.

platnum (Jan 30, 2021 at 9:24)
@Sasquatchumus: you have NO idea what you are talking about. Do a little research. There are many organizations that recycle lithium batteries. Shimano for just one.

Sasquatchumus (Jan 31, 2021 at 12:23)
@platnum: I dunno what you saw mate, but in the video I watched he chucks the bike in a dumpster. That's besides the point though; the message in the advert was that used e-bikes are unreliable and dangerous, so you should buy an expensive new one. Not very friendly for ol' mother earth!

platnum (Jan 31, 2021 at 12:50)
@Sasquatchumus: so ,no cell phones, laptops,,bike lights, cordless tools and appliances and most of all electric cars. The environmental argument is complete and utter bullshit mate.
I’m not sure, did I miss any other modern conveniences? Take your organic spinach smoothie and drink it somewhere else.