Enduro Gradec, the fifth round of SloEnduro series, last one before the final, and Austrian National MTB enduro championships, was one of the most exciting and most demanding races in the five rounds of the series. It was not too demanding for the climb during transfers with about 900 elevation meters climbed on bikes and about 650 more in the gondola, but it was very demanding due to the technical and downright brutal trails, littered with rocks and roots. 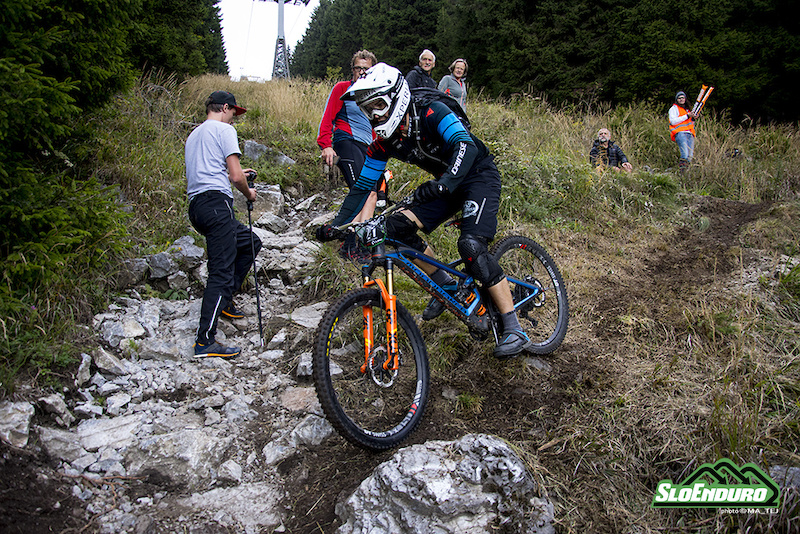 The fight for the victory was epic and in the end, it was the best Austrian downhill racers of the past decade if not all times, Markus Pekoll (MS Mondraker Team) of Schladming who retired from downhill just a week ago, to take it in men’s race. Petra Bernhard (Team Dorrong) was the fastest woman.

On Austrian soil and in the battle for Austrian Championship the Austrian field was stronger than ever in SloEnduro. Slovenian Vid Peršak (Team Dorrong) and Czech Premek Tejchman (Haven, Kellys Factory) were the only ones to mix it up with the best locals. After Saturday’s prologue and Sunday’s five special stages with a total of over 16 minutes of racing Peršak ended just 1.22 behind Pekoll. Matthias Stonig followed in third 3.35 behind and Kevin Maderegger (Ghost Factory Racing Riot) still close in fourth with National Championships overall bronze. Tejchman rounded out the top five. 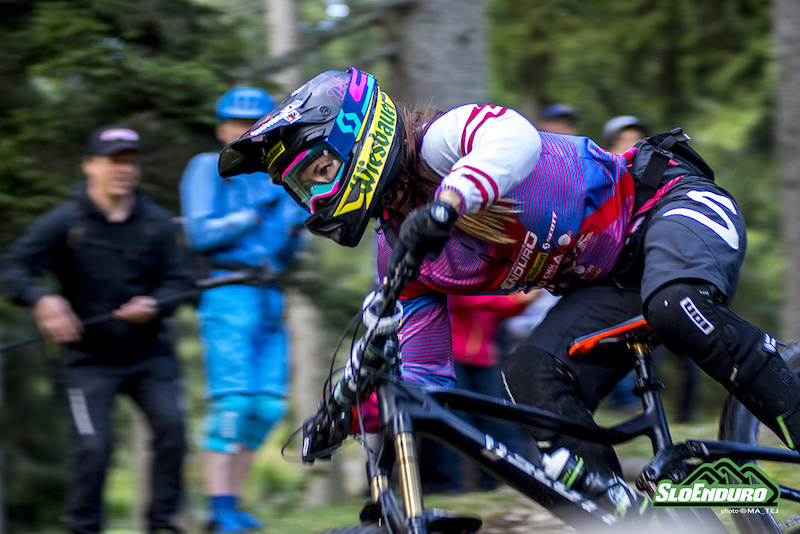 From 6th to victory

Defending champion Gerd Skant (Team Dorrong) was fastest in Saturday’s prologue in front of Peršak and Stonig. Pekoll finished in sixth but just half a second behind. Maderegger started Sunday’s morning best by winning the first stage in front of Stonig and Peršak. Stonig won SS2 from Daniel Schemmel (Cube Action Team) and Pekoll got closest to the top with third. Peršak won the short third stage in front of Schemmel and Tejchman, Pekoll was 4th. Stage four, longest stage and Kenda SuperStage, was a game changer: top five were ranked the same as at the end of the day and they were 8 seconds apart. Schemmel was out of the game with a flat. The fifth and last stage was another short one, Tejchman took it from Pekoll and Peršak. 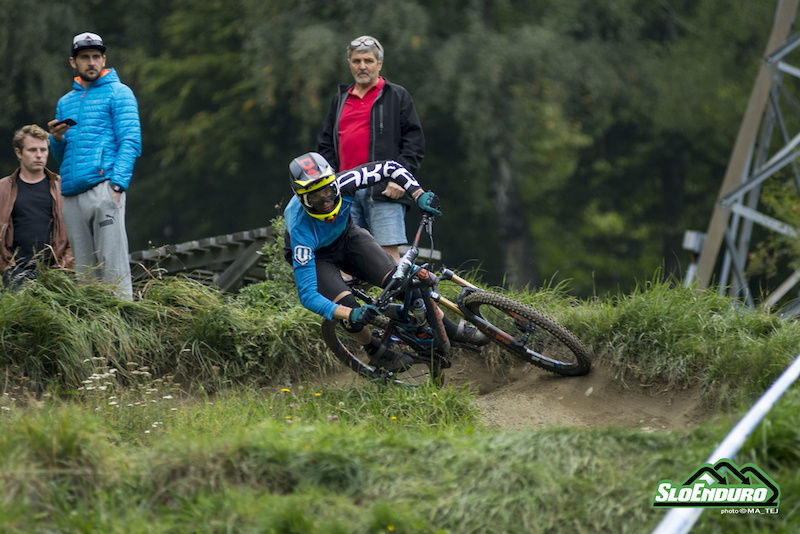 Pekoll is thirty years old and besides winning the overall he is also the master 1 category winner and champion. Peršak was the fastest elite rider in front of Stonig who is also the new elite national champ. Slovak Peter Drabik (Kaktus Bike) in 9th overall was the fastest masters 2 rider. British rider Luke Marshall in 14th overall won the hobbie category and Austrian Max Fejer (Adclub Bikespeak) in 18th was the highest ranked junior.

Petra Bernhard only let 28 guys in front of her and won the women’s race in front of Yana Dobnig (RLM Mondraker Racing Team) and Sarah Gamsjaeger.

Petra Bernhard (Petz) and Markus Pekoll (Peki) already won the national downhill championships in May and can now brag with titles in both disciplines in the same season.

For Pekoll this was the first enduro race ever but it does not seem that the 30-year old would have any goals in the other discipline. He has been doing lots of enduro riding with Stonig, his teammate from 2016, who might have given him one too many advice and finally finished behind him in the national championships… They are also riding same bikes and Peršak, who was unbeaten in SloEnduro for seven races in a row (he missed two in that time), also has one of those. 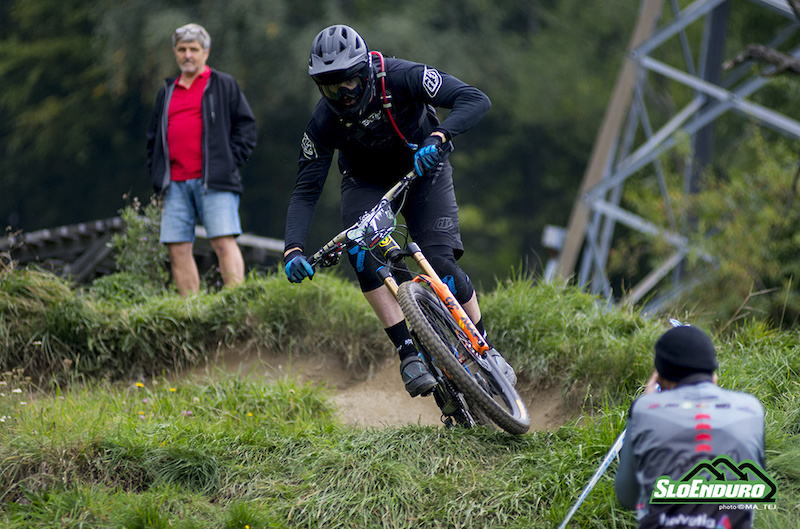 After the race, Markus said: “A very unexpected win. I came without any expectations and just wanted to have a cool day on the bike with friends and see how the whole enduro thing works. I didn‘t make a single mistake on any of the stages. Maybe because I took it back a notch. I wanted to ride smooth and clean, to carry speed. Obviously it worked pretty well. The bike worked awesome. Especially on stage 4, I thought: wow, my bike is marching, let‘s keep the pace high and push hard.”

Petra was also happy: “The weather held back, the tracks were perfect – super flowy with technically extremely challenging parts. Hardcore pedalling on the transfers brought me to my limit. I put all my reserves on the table and gave everything. I liked it a lot, had super lines, was well prepared. But the anxiety before the title race was big. In the end it was a perfect weekend. I’m happy that Peki and I are both double national champions. Routine is key – don‘t count out the racing veterans.” 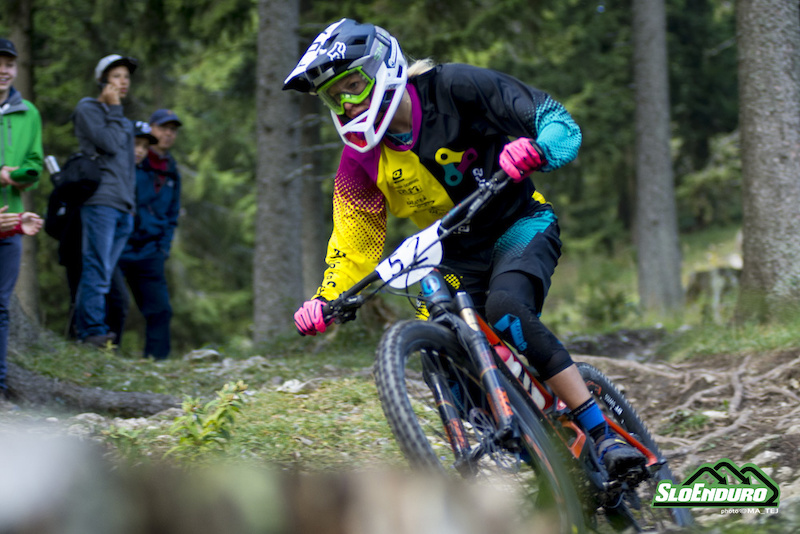 Before the series final in Ajdovščina, Slovenia on October 8th Bernhard and Peršak are leading. Skant who is in second in men’s standing finished 8th this time so Peršak already secured his third consecutive series title while Bernhard still has to keep an eye on Dobnig.

But Vid has another job to do: “This was a great race. It didn’t push it all the way because of the very rocky terrain, it would be very easy to damage the bike. I knew the locals were very fast here and they proved so. My goal was to stay healthy for the final round of Enduro World Series and I managed to do so. I’m looking forward to doing my best in the last race.” 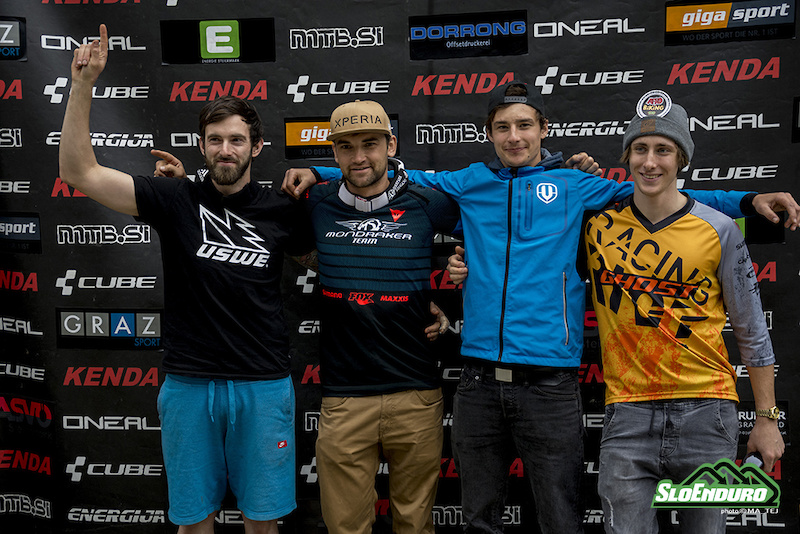 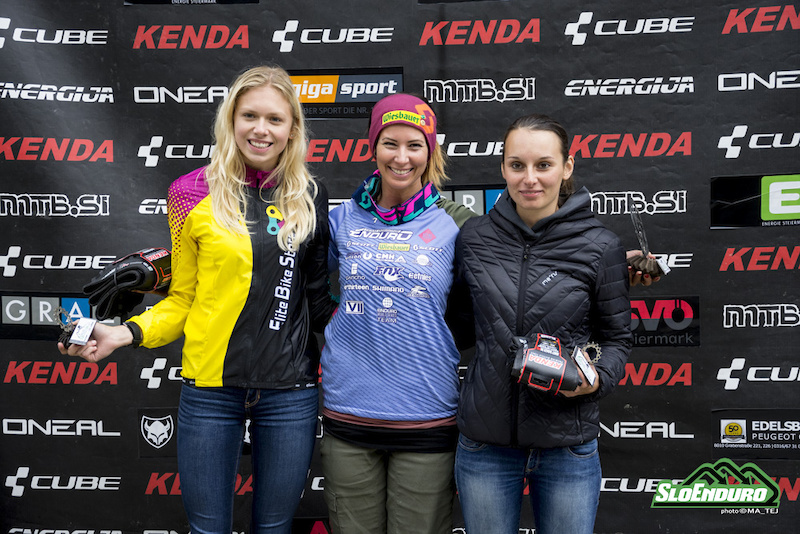 Austrian junior Philipp Freudenberg (Radlager), a Graz local, had to settle for third in his category this time but has comfortable lead before the final. “I had a pretty bad day, still managed to get third and therefore I‘m pretty stoked. The Schöckl is rough as always. Damn hard, no comparison to other SloEnduro races. But it‘s like a dream to have a race here in Graz. Currently I‘m leading the SloEnduro overall ranking with 200 or 300 points. That‘s good. Looking forward to the last race on October 8th. I‘ll push extra hard!” says Philipp. 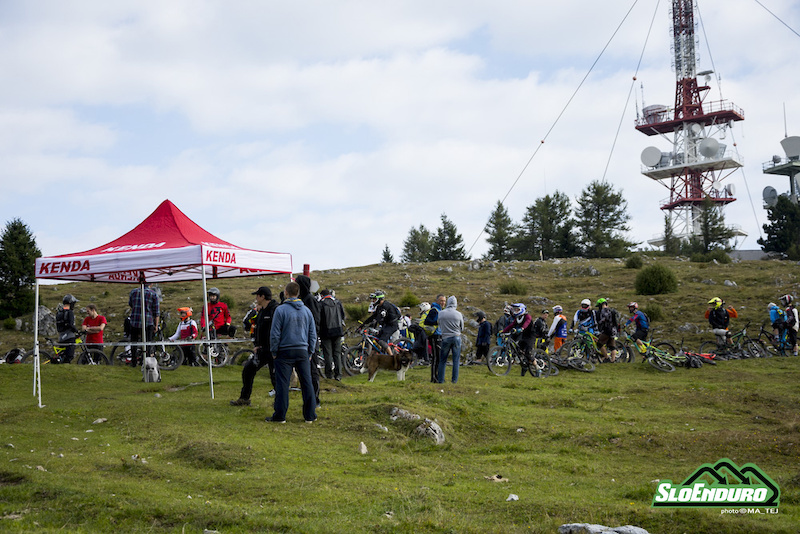