Join Pinkbike  Login
On this Friday, April 18, Snow Summit will re-open its renowned bike park for the 2014 summer season, making it the first and only lift-serviced bike park to be open for the season in all of North America!

“We can’t wait to kick off another great summer season at Snow Summit Bike Park,” said Chris Riddle, Vice President of Marketing for Big Bear Mountain Resorts. “We’re excited to be the first bike park to open for the season, and we’ll be one of the last to close. It’s going to be a long, fun season here at Snow Summit.”

Snow Summit’s first annual Summer Kickoff Party will be held on Saturday, April 19. Saturday’s bash will transform the base area at Snow Summit into a Vendor Booth City, featuring dozens of brands like Troy Lee Designs, Five Ten, Smith Optic, Ryders Eyewear, Marin Bikes, Freestyle USA, and Trek- just to name a few. DJ Slip Matt will be spinning from the Red Bull MXT, and guests can enjoy raffles, prizes and huge product giveaways all day long. Drink specials will be available for the 21 and older crowd. 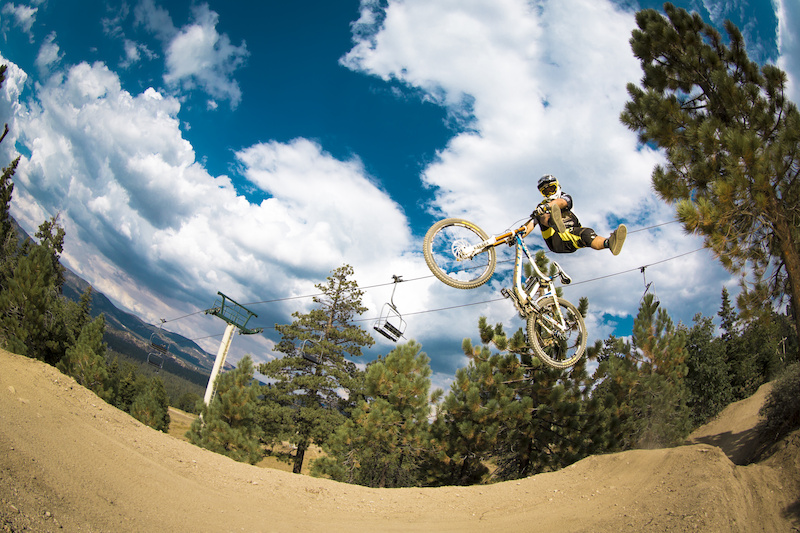 The Snow Summit Trail Crew and Gravity Logic are working on finishing touches of new features and trail designs, including a re-routing of the Westridge Trail. A brand new, top-to-bottom beginner trail is slated to open by July 4. Mountain bikers can enjoy dozens of downhill and cross-country trails, as well as new features that will change throughout the season. It’s no surprise that Snow Summit Bike Park was recently named one of the top five parks in the southwest by MTBparks.com’s “Best Bike Park” survey.

Those who purchase a 2014-15 Screamin’ Deals pass for the winter season will receive half-off the purchase of a summer pass. For more park information and to purchase passes, visit the official BBMR summer website. http://www.bigbearmountainresorts.com/summer/

I might go up there just to ride the lift up and down to check out YOU LUCKY FOCKERS!!!

Sirjboone (Apr 16, 2014 at 20:01)
Im so stoked to buy my first bike park season pass with summit, gonna be doing some backwoods camping to cut costs over weekend trips.

rewob (Apr 17, 2014 at 8:57)
Weekdays were certainly more rideable. Some weekends were worse than others. But I usually started on the first chair up on weekends at opening & rode till about 12 when it got absolutely PACKED then I just pushed up & did some of the jumps over & over to avoid the massive line.

If they do not have the ability to put more than one bike at a time on the lift this year it is going to be the same. This weekend will be an absolute nightmare if they don't put at least 2 on each lift.

shotouthoods (Apr 17, 2014 at 17:02)
I think I will stick with my weekday plan as it seems to work out well and I would be pissed to stand around when I should be riding. Thanks

jrocksdh (Apr 17, 2014 at 7:34)
Ha, try discussing "global warming" to the rest of the country! Record cold temps/snow.
Maybe al gore can chime in about his computer models,..lol

Protour (Apr 17, 2014 at 20:49)
The record colds in the east are due to broken ocean currents which are because of... global warming. We broke the ecosystem. Global warming will make for a longer DH season but a shorter lifespan. Trade-offs....

jrocksdh (Apr 18, 2014 at 12:38)
@scvkurt03...geesh, what a name caller. Guessing you didn't spend much time on the east coast this past fall-current. Freakn frigid.
Now lets ride before the enviros find new reasons to shut down trails!

scvkurt03 (Apr 18, 2014 at 14:18)
The insinuation that the science is wrong because you were cold for a few months is willfully stupid. Sorry to be brash, but it's clear that you don't and/or don't want to understand what's happening to our planet.

jrocksdh (Apr 18, 2014 at 15:14)
Shoots, you know what they say..."the only problem with the other guys opinion is it might be right". Well, lets go shred some dirt before another turtle gets close to extinction!

Go ahead and post any denialist links Fox News viewers, and I'll tell you how and why you are being lied to.

gavisasav (Apr 16, 2014 at 16:50)
dozens of trails? I like the park but really theres two trails west ridge and miracle mile, cruiser is just the upper part of westridge!

treymotleyDH (Apr 16, 2014 at 17:43)
There's other trails besides the trails gravity logic worked on

gavisasav (Apr 16, 2014 at 18:11)
All those got torn out and covered in logs and stuff about halfway through last season I thought

vchawk2003 (Apr 16, 2014 at 18:22)
theres still pleanty of trails outside of the mountain boundaries. some real technical stuff, its pretty good riding. talk to the guys at chains required bike shop, they can point you in the right direction. only issue with some of the trails is u have to ride back to the mountain once u hit the pavement. not a big deal though

vchawk2003 (Apr 16, 2014 at 18:56)
?? it had to been after august then. i was up there then and i rode quite a few off the mountain that i used to ride a while back. damn that sux those were some really good tech trails. some of the sections were pretty close to what youd see on the world cup. well atleast i got to ride them when i did. if your looking for some other good trails go to idyllwild. project x to hellraiser is a great run.

cuban-b (Apr 16, 2014 at 20:55)
they really only covered up upper fall line. if you take the super d route, you can take that other trail (pirates?) to lower fall line and swing around to the camp site. the west side of the mtn also has a lot of stuff.

xjshane (Apr 19, 2014 at 5:55)
They ripped out all the trails last year Part I of the deal with forestry from what I heard However I'm not sure if they are still un rideable a few local guys said they were gonna go go build but who knows

ryanfarner (Apr 16, 2014 at 17:22)
Looking forward to an awesome year at SS Bike Park. I'm hoping they build some North Shore style hits this year. The more like Whistler the better in my opinion!

vchawk2003 (Apr 16, 2014 at 16:07)
i miss that place. the trails were awesome last year i can only imagine what they have in store for this year. im gonna check out highland bike park this year and see how it compares.

catfish9797 (Apr 16, 2014 at 17:02)
You're going to love Highland! Since it is a bike park only mt, not a ski resort trying something else out for summer, and the staff are fully dedicated, they have best trail maintenance and conditions I have seen anywhere, full slope style course, bag jump ramps, jump lines, and an indoor skills center like Whistler's AirDome! Best spot on the East Coast IMO, go early and often!

vchawk2003 (Apr 16, 2014 at 18:19)
snow summit is the only park ive ridden so im not that familiar with the parks other than that. i used to ride idyllwild. (some of Aaron Gwin and Bobby Roots old stomping grounds) but thats not really maintained. im looking forward to highland.

JacobTheDirtJumper (Apr 16, 2014 at 17:15)
So Sick! Getting a downhill bike soon hopefully come out and shred this place

herzalot (Apr 17, 2014 at 6:39)
Don't need a DH bike for SS. I have ridden two full-blown DH bikes there, and a friend's Knolly Chilcotin and the Chili was more fun and more appropriate. I do ride my DH bike there, but unlike other bike parks, it's overkill. PS - I don't jump worth a shit, so take my commentary FWIW. There were only about six jumps built there last year anyway. There was one short rock garden on Miracle Mile, but the rest of the 2.5 trails are groomed smooth. Off-menu trails are another story.

JacobTheDirtJumper (Apr 19, 2014 at 21:09)
Was planning to get downhill bike either way but thanks for the tips very helpful

noyaggro (Apr 16, 2014 at 23:52)
are they open monday-sunday from the start of the opening day? or they will only open during the weekends?

cuban-b (Apr 17, 2014 at 10:23)
they're adding more and more trails that are actually super fun. it's no whistler, but being the only lift assisted resort close to LA and san diego we really got a beggars/choosers situation here.

spunkmtb (Apr 17, 2014 at 10:09)
I am excited but hesitant. I rode up there one day last august. Piled hard. Fractured my wrist. Spent 4 months in a cast and 2 in Physical Therapy. The crash was entirely my fault. I want to go but have a fear of falling on my wrist. Anyway, what is fear......

f*ck
Everything
And
Run

Face
Everything
And
Ride"