Social Round Up: US DH and Enduro Season Opener in Windrock, Tennessee 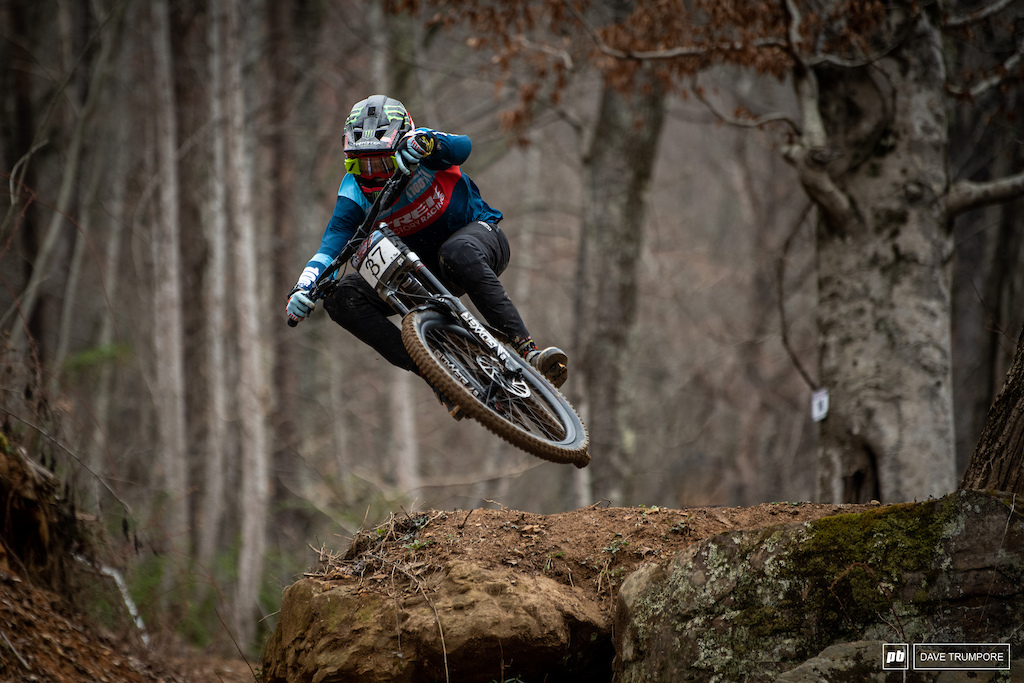 The USDH series kicked off last weekend, as well as the the Tennessee National Enduro, with some wild racing in Windrock. In the DH Elite Men's racing, Charlie Harrison came out on top and Frida Helena Ronning improved upon her second place in qualifying to take the win in the Women's field. In the enduro, Richie Rude and Kate Lawrence both took convincing elite top spots by winning every stage. Check out a social round up from all the goings on at Windrock.

Luca Shaw
Luca Shaw was a favourite to take the win but a snapped chain caused his bike to lock up in a set of whoops within sight of the finish line.

Yeti Cycles Enduro
It was a good day at the office for the Yeti Enduro team with Richie Rude, Warren Kniss and Shawn Neer taking the top 3 spots.

Kate Larence
Kate Lawrence also won all of the day's stages and finished with a gap of over two minutes to second-placed Isabella Naughton.

Aaron Gwin
Not a great day in the office for Aaron Gwin as a small crash took him out of the running.

HB208 (Mar 15, 2021 at 14:35)
It could have been a lot worse. Fortunately he landed on a relatively smooth section on his back. If that was an impact onto his neck he could have been in bad shape. Bummer all around. No one likes to see something like that happen.

Mattysville (Mar 15, 2021 at 15:57)
I took that first video in his post. It was one of the gnarliest crashes I’ve ever seen and I was 5 feet away. I’m surprised he was able to walk away never mind get on his bike and roll to the finish.

ReeferSouthrland (Mar 16, 2021 at 3:04)
Chain growth gone terrible? How do you clean a jump perfect and bing! SC have to work this out for my man Luca who is constantly winning quali. Heal up that was about the worst chain reaction I've seen.

BikesBoatsNJeeps (Mar 16, 2021 at 4:12)
He's attempting to use it to filter banned substances from his water bottle.

BetterRide (Mar 16, 2021 at 9:26)
@makripper: thanks for telling Aaron Gwin how to win! It's nice when someone like you who understands how to win helps a guy with as little experience winning as Gwin has.

rudymedea (Mar 16, 2021 at 3:03)
Hang on, you US guys are going to races, hanging out, having a good time while in the UK despite having vaccinated a shit tonne of people I can’t even go for a ride with 2 mates in the woods?

So did everyone at that event die or is my government incompetent I wonder?

DDoc (Mar 16, 2021 at 5:02)
They used to say "the ocean wasn't big enough".
People came to America to begin with to get away from totalitarian rule.
Common over anytime. Doors open.

onegear29 (Mar 16, 2021 at 7:59)
Please don't include the 35 states that weren't stupid enough to join the other 15 states like Tennessee (Texas, etc) in dropping the mask and social distancing mandates against Government recommendation. The majority of us are doing the right thing in ridding this country of the virus.

With that in mind, I was a little surprised to see some top U.S. pro's at the race this year who are planning to head to Europe so I hope they at least had their vaccination already...

krpduner77 (Mar 16, 2021 at 9:47)
@harmar: We are not close to the highest death rates in the world. In observed cases/fatality were are in the top 25%(the good top) and in deaths per 100,000 population were are 5th from the top(not the good side). Most likely due to more testing in the US affecting the numbers.

HB208 (Mar 16, 2021 at 11:35)
Americans don't like to be told what to do. People would flip if a year out we had the government enforcing that we cannot go into the woods with our friends.

Rudy2455 (Mar 16, 2021 at 2:02)
The amount of excitement with which I looked through these photo epics and searched Instagram for more updates (and repeatedly refreshed the results) indicates that I’m really looking forward to World Cup racing!

Thankfully Supercross is making the wait a bit easier though!

bocomtb (Mar 16, 2021 at 9:14)
She had been crushing QOMs left and right around here. Stoked to see her have success on a national stage!

kirny6 (Mar 17, 2021 at 7:29)
PINK BIKE, It is very cool that all the pros come to the race and you get to see how truly fast they are. There is a lot more going on at this event that I feel should be covered. I think one of the biggest highlights for us mortals is that all of the AM's race the same DH track and enduro stages as all of the pros. For example the DH race has a single crown class that consists of AM's that just want to be apart of the fun along with some insanely fast pros (Walker Shaw). I do not want to take anything away from the pros but it would be cool if there were more highlights noting the AM racers that toughed it out in complete SH** conditions and finished both races. That is just my 2 cents, I tried to type this so that it did not come off as a Bi*** session and just some food for thought.

ObviousAlias (Mar 16, 2021 at 14:23)
They had that same van in Gastonia for the Red Bull Pump Track qualifier in 2019. Red Bull must have a killer deal on Pioneer sound systems - all of the Red Bull busses and vans seem to spec Pioneer sound and DJ gear (the ones with installed DJ gear, that is).

DavidGuerra (Mar 16, 2021 at 14:40)
Damn you're right, I didn't notice at first, thought it was the Pinner. It's not especially close to the Assegai though, looks more like an Hellkat successor.