Social Round Up: Celebrating A Short But Intense Season - Lousa DH World Cup 2020 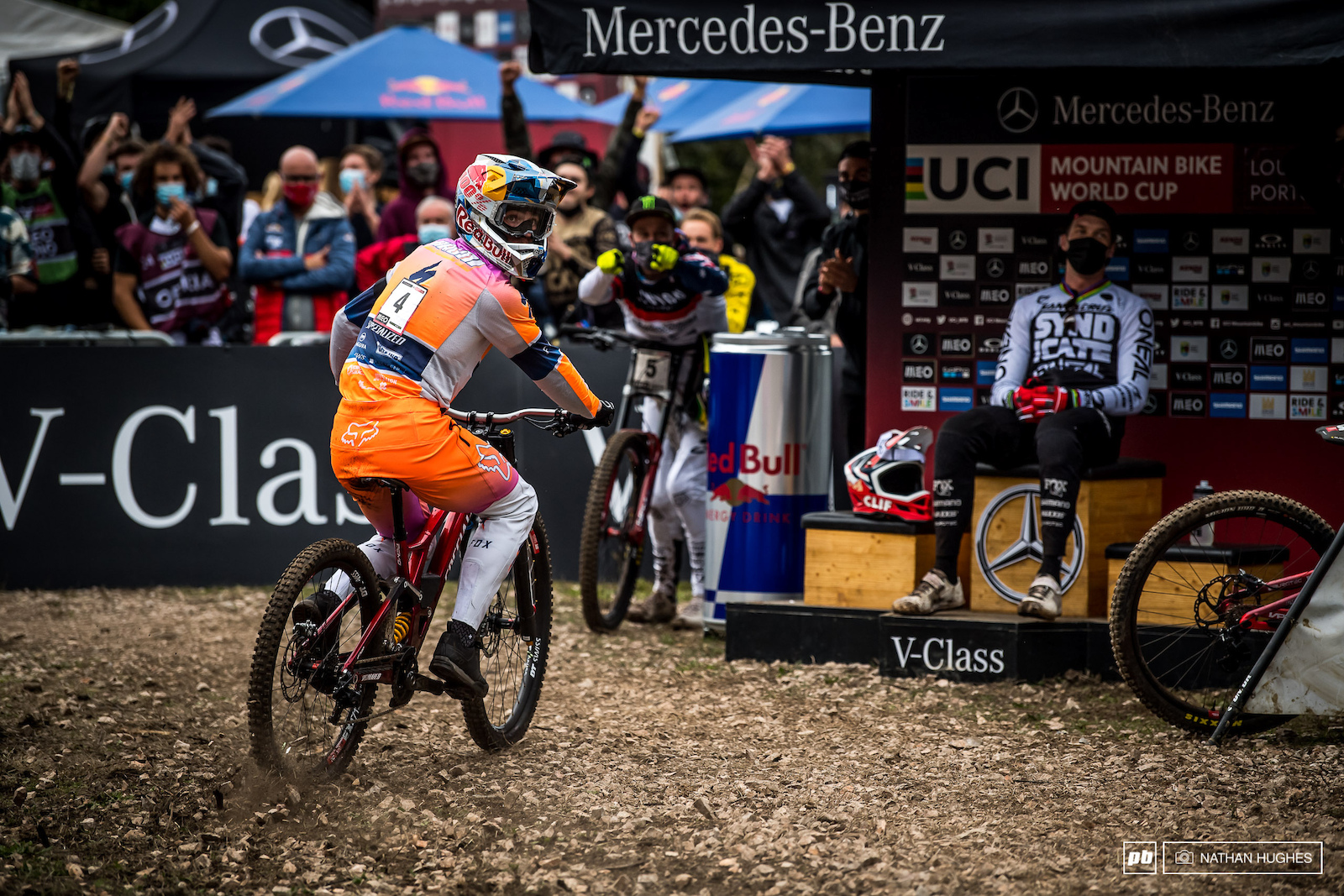 With the World Cup season finishing with a truly nail-biting doubleheader in Lousa, Portugal we rounded up rider reactions from one of the most unusual seasons yet. Follow @pinkbike on Instagram for more.

Safe to say Matt Walker had quite the season in 2020. Matt started 2019 with his first podium, but injury and crashing didn't see him carry on the season the way he started. That all changed in 2020 with two 3rd places, one 4th and one 2nd. Despite not winning a race, Matt clinched the World Cup overall title.

What a ride for privateer Jamie Edmonson, 4th place finish in Lousa and his first podium. Big thanks to the Pinkbike Privateer Ben Cathro for helping Jamie out with pit space. Someone get this boy a contract for 2021.

Phil Atwill hasn't stood on a World Cup podium since 2017, but he pulled out all the stops in and looked to be loving the loose track in Lousa. Quite the result for a privateer and the second on the Lousa podium.

Tracey Hannah left it all out on the track in her final World Cup race and we'll be missing her gutsy race runs next year.

Tahnee finished off the short season with a podium and she'll be looking to get back on that top spot in 2021.

They don't call him Super Bruni for nothing... After losing his World Champion stripes and the World Cup overall, it seemed fitting for Bruni walk away with the final World Cup win.

Myriam Nicole came close to winning the overall this year but it wasn't to be after a crash in her qualifying run left her unwilling to push the limits in the final race of the year...

Marine Cabirou proved she can put down a winning run when it really matters, with a win at the finals in Snowshoe and a win in the final race of the year in Lousa this year. Last year, 200 points didn't get her the win over Tracey Hannah, but this year she had redemption and is your 2020 overall champion.

What more is there to say than G.O.A.T.?

Not a bad season for the Syndicate, winning three out of four races.

A more than impressive season for a first-year Elite...

A win for the young American is promising for 2021.

The future is bright.

Mr. Consistent finished the season with a podium in Lousa and we're not counting him out for many more of them when racing next returns...

It was great to see Gwin back on the podium at the first round in Lousa. All eyes on 2021 to see if he can break Minnaar's record.

OlSkoolJake (Nov 2, 2020 at 17:49)
It wasn't the DH season we wanted... But, hot damn! It sure gave us everything it had, left nothing out. Definitely one of the better and more intense seasons, hands down... I really hope the UCI looks into the B2B racing format... I think this style of event, is really enjoyable, and I don't think I'm alone in that. I know its hard for the riders and teams. But it makes for much better racing. Also.... Lousã.... That's the way a DH track should be.... Hard AF. Bring it back in the future.

flowisforpussies (Nov 3, 2020 at 4:57)
I totally agree and I don't' understand why nobody is complaining about that (apart from Eddie Masters who wrote an interesting article about it).
Motocross, Motogp, Superbike, F1, etc. they all have more than ten races a year (and sometimes two races on the same day).
They keep saying that DH is the F1 of mountain biking, but it doesn't seem so.

flowisforpussies (Nov 3, 2020 at 10:07)
@xTwoSnakesx: Pretty sure I can't write the link (it's on another mountain bike website with a green logo), but if you google: "Eddie Master thinks the UCI is suffocating downhill racing" you can easily find it.

Fifty50Grip (Nov 2, 2020 at 19:42)
The GOAT had to be the jaw dropper IMO, big motivation for all the entire Mountain bike world, lots to look forward to if you stay in shape and take care of your body.

We went through this before.


Thanks for the coverage PB.

ElVenezuelan (Nov 2, 2020 at 19:34)
Counting this year it will make 6 years of World Champs in Europe, Should be the UCI Mountain Bike European Championship. Total joke!!! F.... the UCI and all the governing clowns!!

tylersaurusrex (Nov 2, 2020 at 21:26)
You realize that Europe consists of many individual countries that are different parts of the world. And if it's such a big deal why don't you organize and host them then?

I'm not defending the UCI, but I don't think you understand how this works.
It's not the UCI that asks venues to host it's the other way around. If there aren't any venues outside of the established European ones that want to, or even can host a UCI World Champs then why should they travel elsewhere.

Mitch243 (Nov 3, 2020 at 7:03)
And the 2017 WC was in Cairns, Australia. Based on the location density of competitors, it seems like somewhere within Europe makes the most sense anyway to benefit the biggest number of competitors.
Post a Comment