It’s that time of the year again, the World Cup is over and World Champs is done. Most of the riders are chilling as it is the off season. So Specialized decided to make the Asia Pacific race in Indonesia an annual event. This year they moved the venue from Batu-Malang to the Sebex Bike Park in Mt. Pancar Sentul, West Java. The elevation is not as big as last year, but the course has a bit of everything, steep and twisty in the top section, big drops, rocks, roots, a pedaling section, and few big jumps. 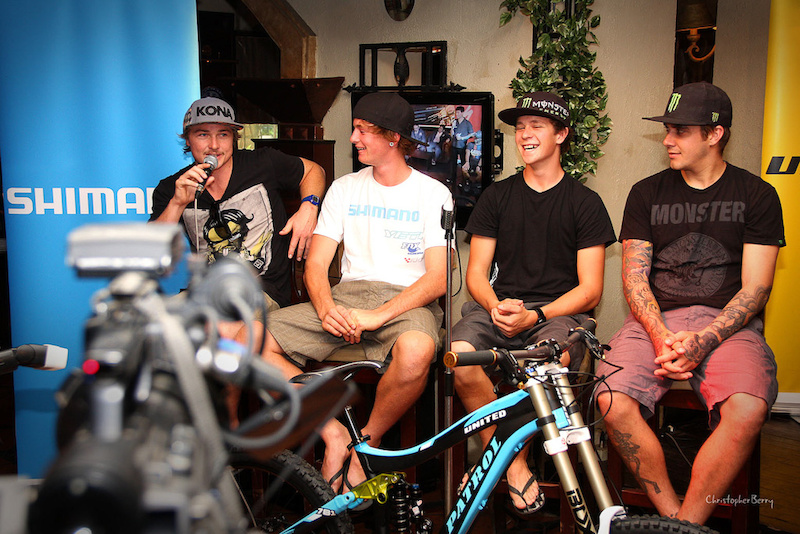 Team Monster Energy Specialized brought Sam Hill and Troy Brosnan, and Yeti Fox Factory team rider Shaun O'Connor and Kona rider Mitch Delfs also came this year. The boys were expecting a wet race as it had rained since they arrived and the forecast was a thunderstorm from Monday til Sunday. Popo Ario Sejati won the race last year and he was really prepared and keen to hold on to his title. Pornomo, the SEA Games gold medalist, was also ready to give the big boys a run for the money. This year we also had some fast Japanese riders, Hajime Imoto of team Love Bikes, Yuki Khusima of KHS bikes Gravity Lab-Ninja TV, and Daisuke Kurusawa Team GT-Fust. Also racing were Adam Ahmed from the Fakawi Banshee team who is the Malaysian National Champ and the Series champ, Tan Hong Chun, the Singaporean National Champ, and Joey Barba, the SEA Games silver medalist from the Philippines. 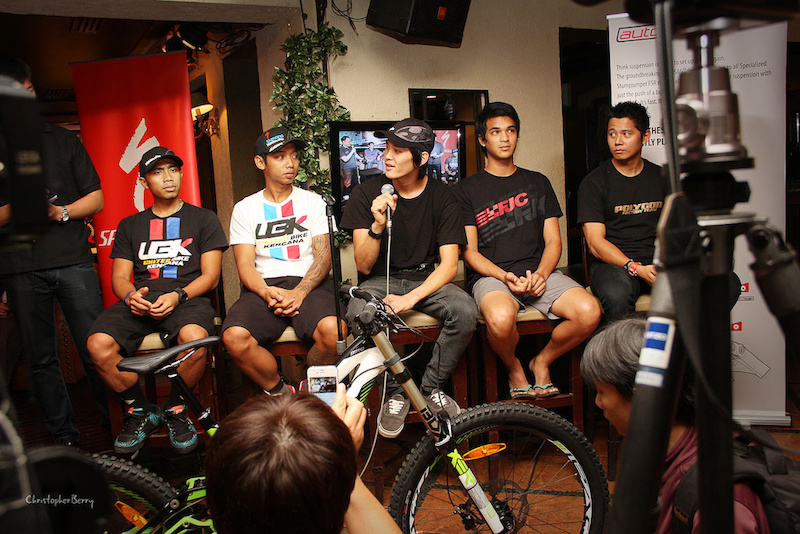 Total rider entry was 157 from Australia, France, UK, Japan, Singapore, Malaysia and the Philippines. Way more riders than last year, and the elite field almost doubled. The riders were divided into the following categories:

Elite
Open
Master Expert
Master A, B and C 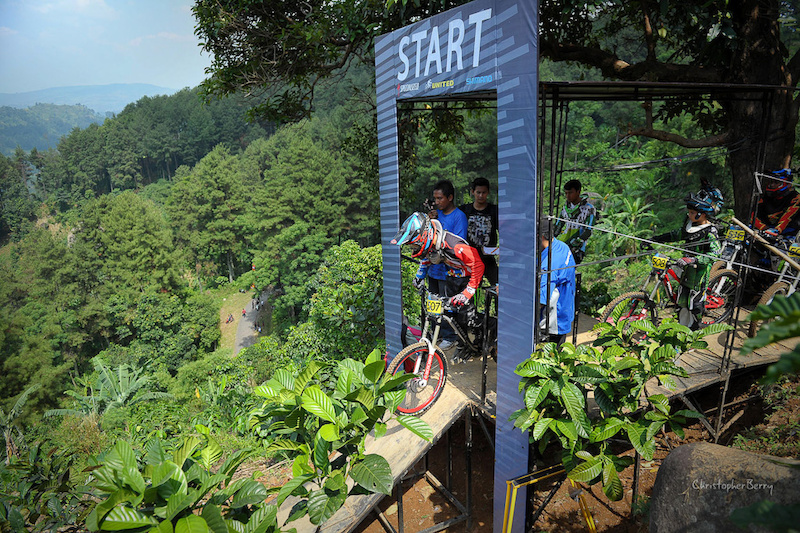 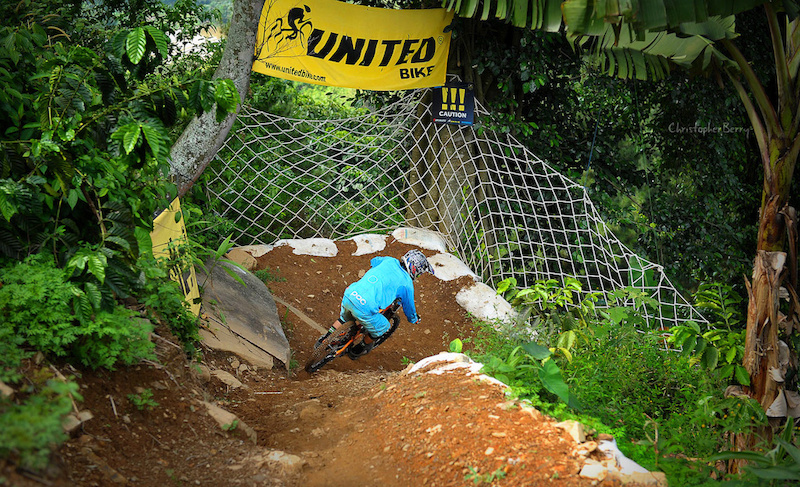 Friday's practice was wet in the morning after the previous night’s heavy rain, but it had dried out by the time the Elite timed practice was run. A few riders were having trouble deciding what tires they wanted to use, changing them after each run. Sam and Troy ran the cut down Storm tires and Shaun was running a proto tire from Schwalbe while Mitch ran Minion's. The boys only did few runs and decided to sit out the rest of the afternoon. Popo and Pornomo also did few runs with wet tires. The track can be a bit tricky for tire choice as the top section is a mix of clay and some small rocks which better in the wet because it has better grip. The mid section is full of rocks and roots while the bottom section is 100% clay with some roots and rocks, which can be very nasty in the wet. Sam got to experience it during his practice run as he went down quite hard. The Open and Masters riders were having some trouble finding grip during their practice run. Luckily not many riders were injured. 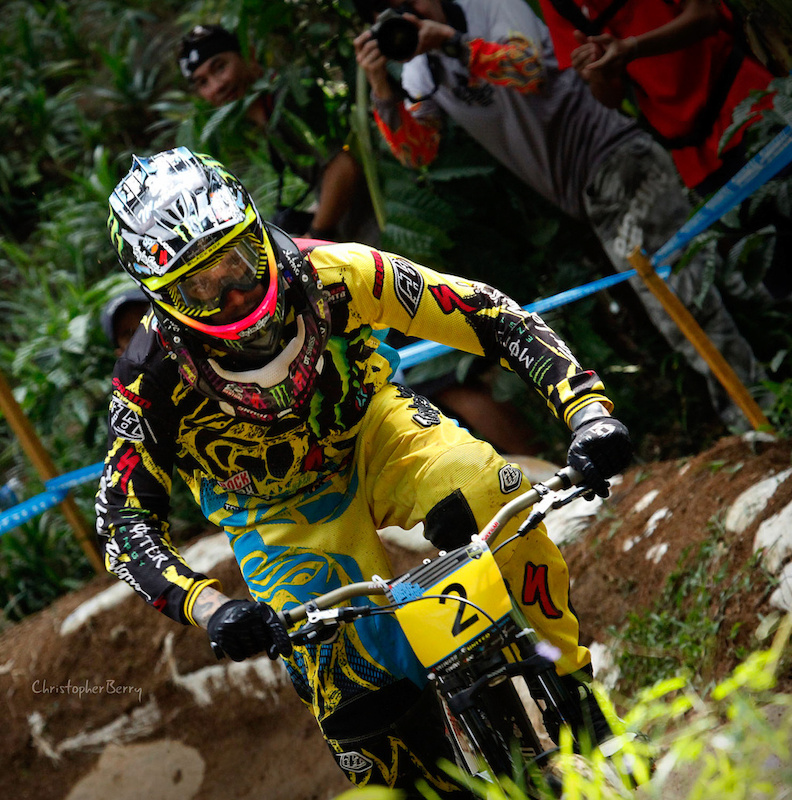 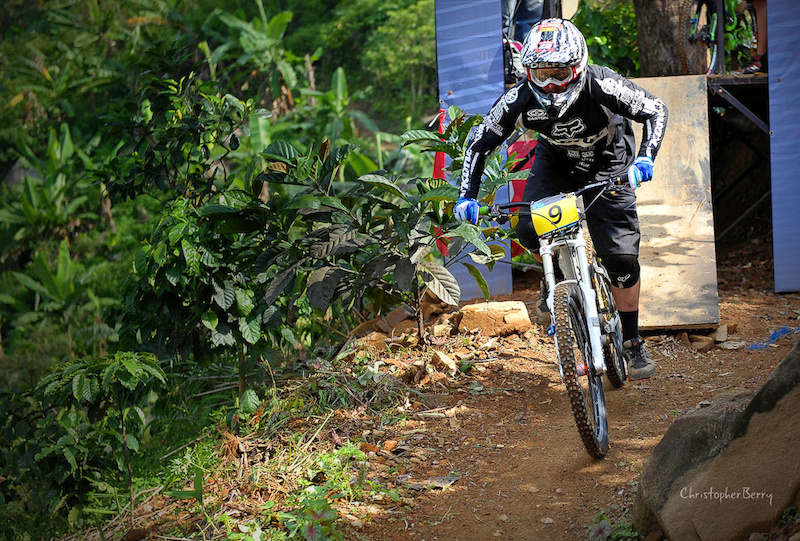 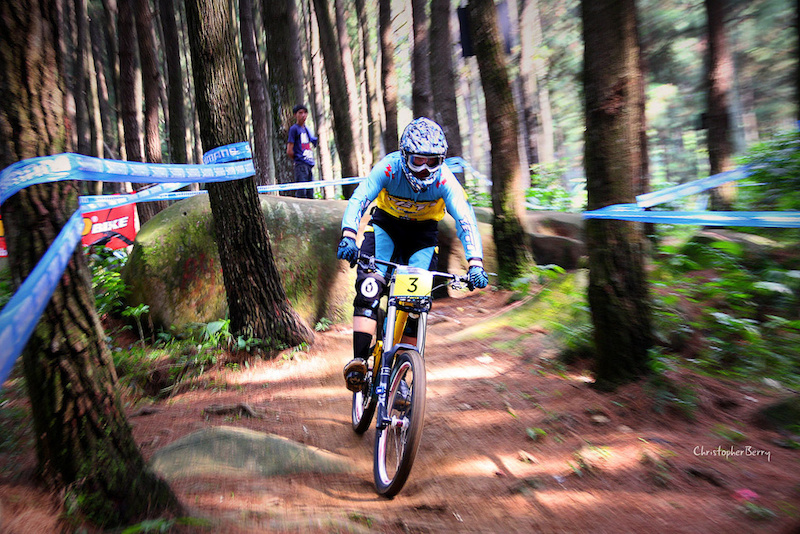 Saturday's seeding run was again wet in the morning from an even a heavier rain the night before. Seeding started at 9AM with running order of Master C, B, A and Master Expert. After lunch the seeding runs proceeded with the Open and Elite categories. The sun was out and the track was better than Friday for the Elite riders. None of the riders changed their tires. Seeding was run backwards from last year’s finish order, and the top 5 qualifiers were, Pornomo, Kamra, Shaun, Sam and Popo, they would start last. Mitch started mid pack and was looking fast until he blew his tires out off the rim just before the road crossing. The 3 Japanese riders also started somewhere midpack, the trio were pinning it up at the top and looked very smooth. Troy went 9th and he was on a mission, he hit the United drop at high speed and was still pedaling in the air as he launched off it like a kangaroo, he came out of there damn fast and finished 2nd. Pornomo was not feeling well but he managed to get 5th. Sam said he was going to do a fast seeding to see if he could beat Popo, but he was not happy with his result as he ended up 7th. Shaun was pinning it all the way down but was also not fast enough and only got 6th, beaten by 2 local riders Ditra and Afos. Popo was really determined to win and he showed it by winning the seeding run 3.58 seconds from Troy. 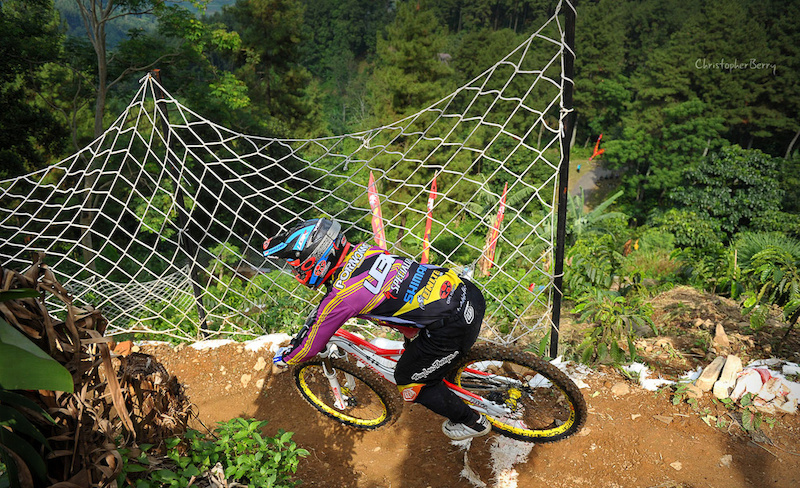 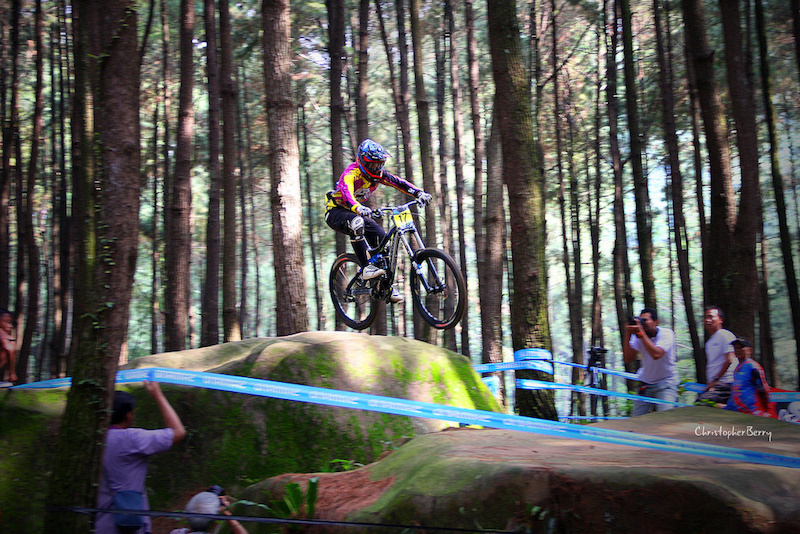 The final on Sunday was really 180 degrees from what everyone had expected. The rain didn’t stop from Saturday afternoon on. The boys came really early to do track walk trying to find new lines or better lines. Sam was really eager to win and he had on his race face from the minute he arrived on the track. Sam has been training hard since he started working with his old coach Tony Davis again. The beer gut is almost gone and he looks fitter than last year, and he hardly even touched the beer, eating well and going to sleep early. Sam, and Mitch didn’t chang tires even though the rain stopped midday just before their final run. Troy changed to dry tires, and Shaun changed to wet tires. 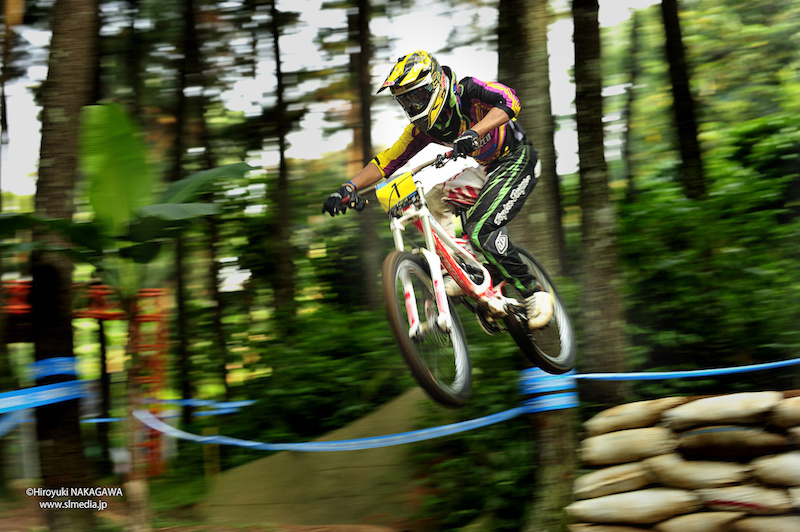 The track condition was dry up top and really muddy towards the bottom. Mitch was the first to come down and he was flying... until he crashed just before the finish line. He still managed to hold on to the hot seat for a very long time and ended up 4th.
Pornomo couldn’t better Mitch's time and finished 5th. Shaun was really pinning it and was the fastest going through the rock garden. He got on to the hot seat and stayed there until the end, finishing 2nd. Sam always seems to pull out an amazing run out of his pocket. He kept his word and got his payback from Popo, beating him by 5.47 seconds. Popo ended up 3rd on the day. Troy had bad luck again just like last year. He crashed hard on the United drop, the gamble with dry tires not paying off. He was lucky to get away without breaking any bones. 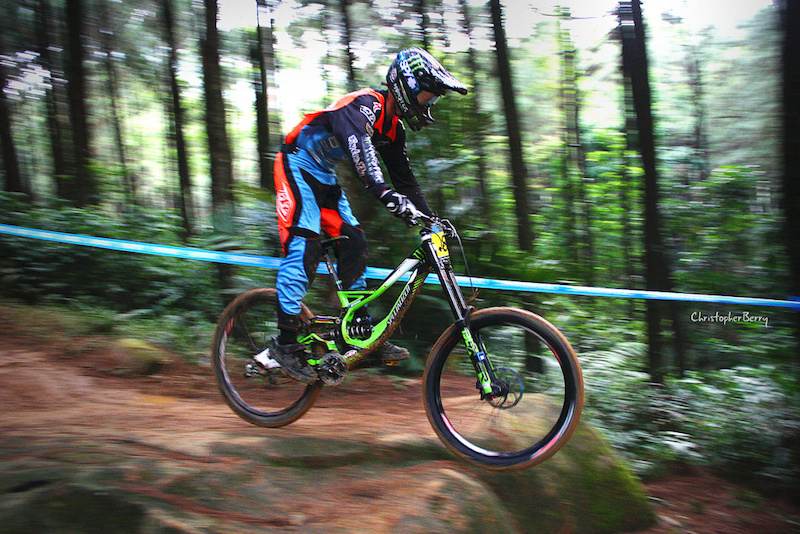 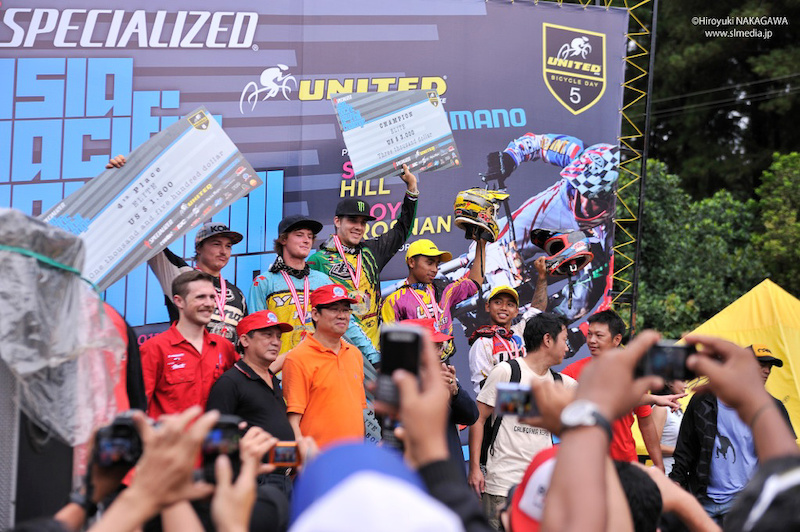 It was an awesome weekend for everyone and hopefully it will be bigger again next year.

See you all next year!

Posted In:
Racing and Events Specialized

cikudh (Dec 1, 2011 at 23:27)
it is not on UCI list. but that 100% doesn't matter as long as local can ride/race along with WC champion, WC junior champion,, winning it and being on top of the list is all that matter .. there are downhill ripper everywhere on the world , and it doesn't mean people with lack of facility and less known, can't be a winner . . . IMO

finnrambo (Dec 3, 2011 at 18:26)
this is true I'm just getting into the sport so i dont know exactly what the UCI does (besides screw everyone) didnt think that large events like this were allowed without UCI santcion...... it is nice though just going to a race and having fun.... I think its pointless putting all of your time into training, thats why i left road

Troy Brosnan's crash. It must have been painfull ! Props to him, he rode out !

bismojo (Dec 1, 2011 at 18:37)
This is THE biggest event in my home country, props to the organizer (andre and friends), too bad I couldn't join the amateur class (My wife is 8 month pregnant, no racing pass for the moment hahaha)

Congrats to Hill, better luck next time for Troy, and GO INDONESIAN DH !!

Benlow (Dec 1, 2011 at 21:17)
Interesting how Hill is now on the "Specialized World Team".... Unless I've missed something, during the World Cups the team was named "Monster Energy Specialized."

Kudos to the Barbas of the Philippines.. I hope we get to have more events here in our country.. It's nice to know we can hang in there with the big guns of Downhill Racing

hotrodmarlin (Dec 2, 2011 at 7:38)
It's so cool that a couple of locals in indonesia can finish strong against the best riders in the world. I also like the way DH races bring the world together- good stuff!

if he's coming in hungry, and Hart, Gee, Minnaar and Gwin are all coming in hungry (along with a number of other young guns) this next season could be a real nail-biter!
Although I would love to see Sam pwn everyone à la 2007... not gonna lie...

Podium finish for sure sans his crash. Stoked to see Troy next WC season. He's boss on two wheels.

samjam (Dec 2, 2011 at 2:22)
Mate my wife and I went on holidays to Bali late last year.Bali is a Indonesian Island that many Aussies go to.You could get up in the morning,put on shorts and singlet,go out all day and go to a top resteraunt then the night clubs in the same gear.No one had covered shoes over there just thongs (flip flops in your part of the world).....We hired bikes and did some XC tours that turned out to be a DH race between myself and a crazy French back packer lol.....wonderful part of the world,if you can ever get there please do....It changed my life seeing how these wonderful people enjoy themselves so much with so little.
While i have not seen too much of the world i can honestly say the Indonesians are the most respectful,resourceful and most loving humans i have met.Check my pics on my profile under "Bali 2010"....I actually get "home sick" for the place when i see the pics hahahaha.

Gruta (Dec 2, 2011 at 3:37)
holy crap ! He went head first into that boulder, although he was not carrying that much speed, it was still head first into a BIG ASS BOULDER!

gazsinead (Dec 1, 2011 at 15:46)
Hardly a world class field, hill wont win the wc next year. And he wont be riding for specialised

gazsinead (Dec 3, 2011 at 18:25)
Haha you dont know but Sam hit a pedestrian whilst drunk in his car coming back from a club, he ran from the cops. Specialised are PISSED about this, and as soon as his contract is expired they wont be renewing it. Its not the image they want!2

gazsinead (Dec 10, 2011 at 5:34)
If you read the internet closely there is many references to Sam doing the same as a Australian cricket player did... which is drunk driving and hitting someone and running away. dirt's site mentions it quite a few times since it happened
Post a Comment