Specialized Hint at New Rider for 2020 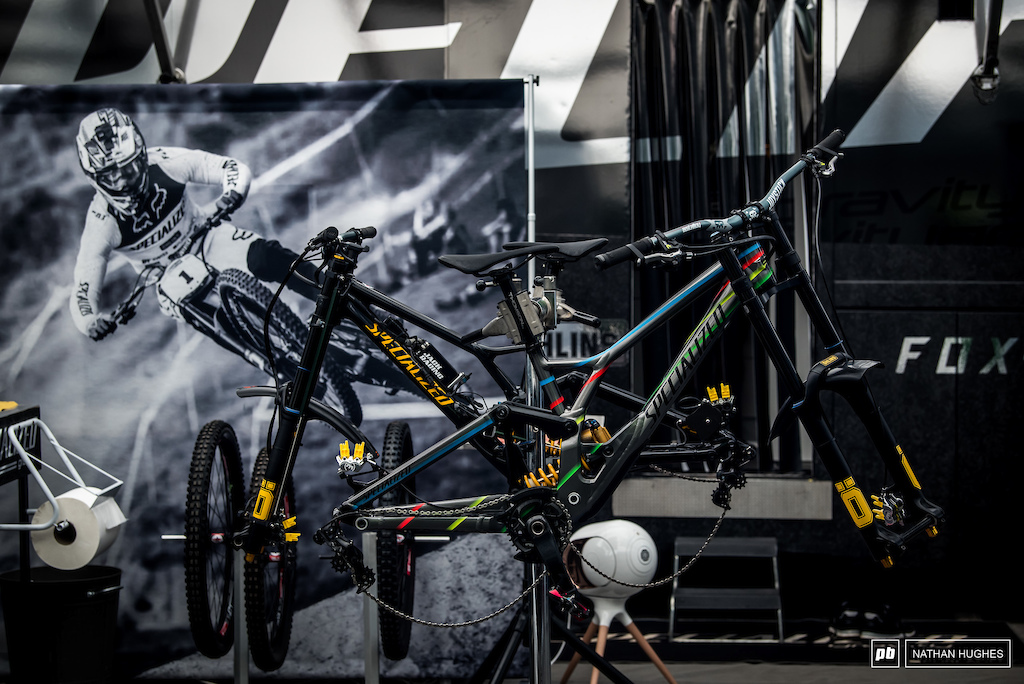 Will another frame be joining these two in 2020?
Specialized Gravity have decided to kick the team rumour mill into gear with a tease that they will be fielding a third rider next year.

Loic Bruni and Finn Iles were the only two riders on the team in 2019 after Miranda Miller left to race enduro for Kona last offseason. The team has today updated the bio of its Instagram page with a blank tag, indicating a third rider is joining the team next year.

The team also posted a story that indicated a new rider was inbound.

At the moment we can only speculate who it might be but with two established podium riders in the team, we can't imagine it will be another Elite Male rider. More likely, Specialized will want to add a development junior to bring up into the senior ranks, as they did with Finn Iles in 2014, or a woman to replace Miller.

We've reached out to the team for further information and will update this piece if we hear anything more. 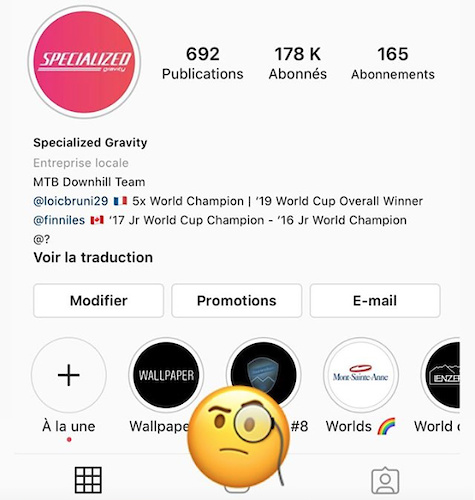 Dropthedebt (Nov 20, 2019 at 9:38)
@RCederholm: Until all the sick f**ks involved in this GLOBAL fiddler network are brought into the light for all to see. Whoever they are and regardless of how rich and powerful they are.
So don't get distracted by the slight of hand of "I'm peach mint" or Brexit and get angry at this instead.
Use your Internet connection to find our all you can about this elite ring, because that's what it is whether you want to believe it or not.
Remember when Cosby was a lovable TV doctor...

up-left-down-right (Nov 20, 2019 at 11:29)
@Dropthedebt: The head of Australians Catholic Church is currently in jail for being a fiddler. Two Ex Prime Misters are leading the charge for his release, along with Murdochs press. This shit goes all the way to the top!

Ps: Dean Lucus is selling his Scott DH bike, maybe he has gone to SPAZ

gnarlysipes (Nov 20, 2019 at 13:01)
@Dropthedebt: Couldn't agree more. These disgusting criminals need to all be imprisoned regardless of their political or religious affiliations and regardless of their power or authority. Unfortunately, this is run like any other organized crime and they've paid off or bought out many of the powerful individuals who could actually do anything about it.

projectnortheast (Nov 21, 2019 at 6:47)
@dropthedebt that comment made my morning... "what do Christmas lights and Epstein have in common? They don't hang themselves"

Dropthedebt (Nov 21, 2019 at 8:11)
@chriskneeland: I have a brilliant line of Heavy Duty Reynolds Wrap™️ Protection available. It come as a set with a blindfold and earplugs making it perfect for those who choose not to see or hear what is hiding in plain sight.
It's the perfect seasonal gift for all in this joyous season of Peace & Love for all mankind.

chriskneeland (Nov 21, 2019 at 8:24) (Below Threshold)
@Dropthedebt: No need...the tinfoil hat will tune me into all the grand conspiracies no one can ever provide any evidence for! Some call it delusion, others...well they don't call it anything because they don't waste time thinking about made up nonsense.

metaam (Nov 21, 2019 at 9:44)
@Radley-Shreddington: No, when it's announced next month it'll be explained by him being a passenger in his dad's car. That way everybody will accept nothing shady has occurred.

scotttherider (Nov 25, 2019 at 14:41)
@chriskneeland: hey just know you don’t have to worry about the clintons with your views. The rest of us are going to go the way of the Christmas lights and Epstein....

Well that's not very nice at all.

Randy riding a Session would be worse.

That would actually be interesting to watch.

Oh. I guess I screwed up my BMX year.

Besides, Adam can handle a one day event with a weeks worth of prep (Rampage) and BMX in one year. We might as well give him 2029 off. He will have had a long run of things beyond the 2022 Ebike year. Hehehe

Niseach1 (Nov 20, 2019 at 6:04)
Can't see it, but that would be sensational. Really looking forward to seeing Cathro race next season. What a reaction he's going to get at Fort William.

iiman (Nov 20, 2019 at 8:03)
Cathro anounced his comeback on youTube wearing a Santa Cruz t-shirt, his sponsor for years.

thesharkman (Nov 20, 2019 at 14:03) (Below Threshold)
From the most exciting rider in Loic to the most boring person involved in DH, cathro? That wouldn't be a very good business decision.

codiiiiiiiiiiie (Nov 20, 2019 at 8:27)
Yeah!!! I agree!! Vali Holl would be an epic addition to the team. I could totally see her training alongside Finn and Loic

tgent (Nov 20, 2019 at 8:43)
Agree, Vali Holl for sure. Was looking for the first person to comment on her, and am surprised it was so far down! I think it makes sense based on her past results as a junior and it seems like her current YT/SRAM team is a big of a hodge podge and Spec would definitely offer her better $ and support.

paulskibum (Nov 20, 2019 at 8:53)
@tgent: Holi is only doing half the season next year and has already confirmed she is staying with SRAM Team

codiiiiiiiiiiie (Nov 20, 2019 at 12:10)
@paulskibum: Ah that makes sense. I knew she was finishing school, but i thought that since she'd be competing out of juniors next year, that some companies would want to jump on her talent. It'll be exciting to see who they go with!

mexicanbikefiesta (Nov 20, 2019 at 8:49)
Plot twist; they don't have anyone and posted this to get the best options out of the comment section.

kookseverywhere (Nov 20, 2019 at 10:01)
@colincolin: the most successful treatment of ligma is injections of updog

westagil (Nov 20, 2019 at 6:06)
Maybe the Denim Destroyer. Maybe because he raced on Öhlins this year and because of his results he got invited.

prenderville (Nov 20, 2019 at 15:14)
Everyone check the burgtec instagram story. They have released a picture with a set of ohlins forks and a scrubbed out frame with the caption “team rumours” It’s just speculation but not many teams run the ohlins forks.

MarcusBrody (Nov 20, 2019 at 6:06)
From a competitive standpoint, Tahnee would make sense, but they seem to want to keep FMD Racing together and this press release doesn't make it sound like they're also sponsoring Kaos's whip off world tour.

BikesBoatsNJeeps (Nov 20, 2019 at 9:32)
TFR doesn't want FMD. Do you think Tahnee would split from FMD? Do you think Trek wants Kaos? I'd assume at this point both of them have had some time on a Trek due to Kade, but that's a lot of baggage for TFR to handle just for one top notch (arguably the best current) elite female.

MikeyMT (Nov 20, 2019 at 13:39) (Below Threshold)
@BikesBoatsNJeeps: If Tahnee was smart she'd separate herself from Kaos. Kid is unreal on a bike but does not seem to have the mental game for racing.

BikesBoatsNJeeps (Nov 20, 2019 at 17:03)
@MikeyMT: meh seems like he has a lot of bad luck. It doesn't seem like he wants to be racing World cups either. He's fast and super talented, but so is Kade and he has a hard time qualifying. I think both those guys would rather be doing Crankworx, Hardline, Fest and Rampage. I know Kade at least has stated as much. But I imagine TFR wants results. Trek already has a slew of "ambasador" type riders, how many are they willing to support. Obviously riders with big social media followings help the brand, and having rad riders also ups the cool quotient, but you already have Cam M., R-dog, Steffi Martin, Semenuk, Casey Brown, and the list goes on of riders that only occasionally, or never, compete.
I guess the question comes down to, what is better exposure, WCDH or social media.

Loki87 (Nov 20, 2019 at 15:58)
@makripper:
That team is probably the most effective marketing tool in the WC atm, besides Bruni and Pierron (as individuals).
I highly doubt they'll let go of Loris.
Also, is his contract even up yet? I believe he still got time left.
Loris' problem isn't the team. He's just young and needs time to sort his mental game out. Shaw was on fire but got burnt and then injured. We need to wait and see how he does after full recovery. I'm pretty sure if those two can't fix their mental game on the syndicate team, no other team will work any better for them.
I would however love to see Lori's and Loic on the same team! That'd be so much fun to watch.

Loki87 (Nov 21, 2019 at 18:33)
@Ieazo:
Didn´t know that either. Still, i´d like to see the two together, just because it would be fun to watch.
For their individual growth it might be the right decision to stay on seperate teams though.

Flavaine (Nov 21, 2019 at 5:31)
Rumour is Prof Mama Jafali is out of contract and looking for a ride (with no sexual preference by the looks of things).

Oxnard (Nov 20, 2019 at 5:41)
Totally thought they were getting a rider for a third world country, disappointed.

GatoGordo (Nov 20, 2019 at 9:16)
Bruni’s Back is sore from carrying the Team. They need a second rider that can actually win! Finn can only milk winking nationals so much.

millsr4 (Nov 20, 2019 at 9:31)
It's definitely not Vali... she already announced that she is staying with Sram and only racing part time this season so she can finish school before going fully professional.

stubestrong (Nov 20, 2019 at 11:27)
Holl working to complete education then did read a post saying university maybe next target so racing a side option

Louisd2000 (Nov 20, 2019 at 12:38)
Their Enduro team is literally three up-and-comers, they also signed Miranda Miller when she was well established but not exactly a champion. If sarcasm was the intended tone then I apologize.

nozes (Nov 20, 2019 at 13:29)
@Louisd2000: It was not.
You are right about Miranda,she won the worlds in Cairns after she entered the team,but the Spec DH team always featured the big champions: Hill,Gwin,Bruni,etc.

bulletbassman (Nov 20, 2019 at 23:25)
@enduroFactory: Uni's can generally be worked around race weekends. High School is a very different story.