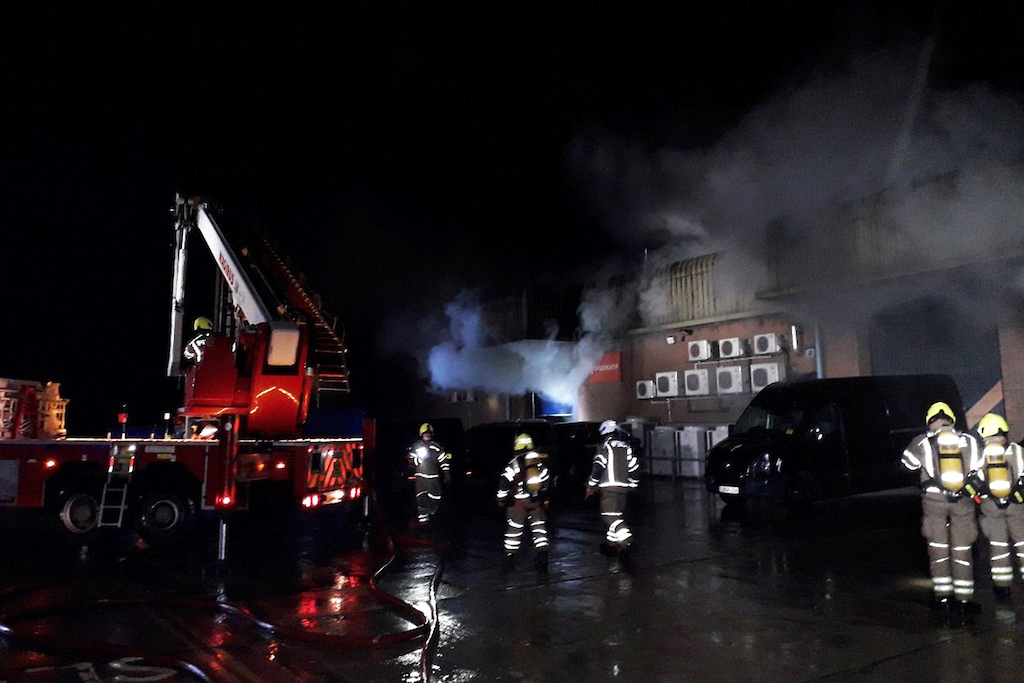 Photo: London Fire Brigade
Specialized's UK headquarters were gutted by fire last night with a four-hour effort by the London Fire brigade to get the blaze under control.

The London Fire Brigade (LFB) were called to the six at 6:36 pm on Saturday where they deployed twelve fire engines and around eighty firefighters to tackle the blaze at the Chessington business park. The LFB found nobody injured from the fire but, a warehouse was destroyed.

UK head of marketing for Specialized, Kirsty Woodcock, told Cycling Weekly: “Last night, we were notified that a fire had affected our UK headquarters in Chessington. Thankfully, no one was hurt, but sadly the fire has had a devastating effect to our offices. There will be some short-term changes to certain business operations, but our warehouse is located elsewhere and riders should not be concerned.”

Neil Guyett, the LFB Station Commander who attended the scene, said: “Fire crews arrived to find a well-developed fire and worked hard to bring it under control in what was a protracted incident. There was thick smoke issuing across the business park."

The cause of the fire is unknown but, the LFB's Fire Investigation Unit and the Metropolitan Police Service are now investigating what could have started the fire.

commental (Feb 7, 2021 at 8:28)
It was an electrical fire caused by a faulty fuse. After an epic 4 hour pitch-ed battle with the fire, LFB have announced the status of the building is now safe, although it may now need to be demo-lished.

harriieee (Feb 7, 2021 at 9:11)
Specialized have taken a big hit in the UK for sure. Events like this can chisel away at a company's foundation even. But I think they'll endure; oh, I'm sure they will.

rcybak (Feb 7, 2021 at 9:32) (Below Threshold)
@DownHooligan: This should be the most upvoted comment in the history of PB! C'mon, where are all the former Specialized owners who have been screwed over by that company?

dllawson819 (Feb 7, 2021 at 20:13)
This news is a little tired, but The Captain spoke from Ground Control and said that the flames were Eliminatored by a Renegade Hillbilly Butcher.

AFunFox (Feb 8, 2021 at 16:56)
I thought I heard a Rumor about this.
They will have fun Chisel-ing away at this.
I wonder what the Status is on this?
What an Epic story!
Seems like a Hotwalk to the door.

Maybe I just need to Levo this to the pros!

Porsche73RS (Feb 7, 2021 at 8:20)
I guess they are just going to have to pass along these cost to the consumer. The 2022 s-works stumpjumper will finally surpass the base price of a base model Tesla.

Porsche73RS (Feb 7, 2021 at 9:50)
@extratalldirtrider: sold that a long time ago when first kid was born. Plus it was an older model that want to expensive and it sold for roughly what I bought it for.

VPS13 (Feb 7, 2021 at 19:30)
@siderealwall2: Unfortunately air cooled have become trendy, I have always wanted to own an air cooled Porsche but no way am I paying market prices, they were attainable 10 years ago but now its just crazy. Guess I'll have to settle for a Meyers Manx style Beetle build with a bike rack on it to get my rear engine air cooled dreams at a reasonable price

meathooker (Feb 8, 2021 at 5:51)
@VPS13: we had my wife’s forester XT for sale in 2011ish as we had replaced it. A guy with an air cooled Porsche wanted to trade for an early 80’s 911 in great shape. I was so excited at the possibility of owning it. A buddy came over to do the test drive and check it out with me. We took it on a 1/2 mile drive and I was so unimpressed I turned around and opt’d out of the deal. Now I race with them occasionally and kind of like the gt3’s but they’re still somewhat underwhelming.

Porsche73RS (Feb 8, 2021 at 7:54)
@meathooker: growing up without much I always wanted to attain one. Then once I did, I agree, it was underwhelming and didn't bring any more happiness into my life than any other car.

VPS13 (Feb 8, 2021 at 19:47)
@meathooker: I just absolutely love the air cooled sounds, its not a powerful car by any means but the sound it makes is just a primal experience. I found the 80s Carrera I drove had a horrendously heavy clutch though.

meathooker (Feb 8, 2021 at 20:09)
@VPS13: my buddy loves goofy air cooled stuff as well but i think i have too much of a performance based mindset to get over the lack of performance. its almost like a harley - a very efficient way to convert gasoline to noise without the side effect of horse power.

Has the sound that brings on the instant eargasm and linear powerband that keeps you smiling all the way down the road. Not to mention you can actually corner and the brakes bring you to a stop now not a half mile down the road.

barp (Feb 7, 2021 at 10:22)
Am I missing something? From the second paragraph, "a warehouse was destroyed" (per the London Fire Brigade); but from the next paragraph, "our warehouse is located elsewhere" (per Specialized). So... Did a warehouse burn, just not one that contained any bikes?

sjma (Feb 7, 2021 at 15:45)
Sounds like it. They may have their HQ in a warehouse building, maybe with prototyping equipment and flexible office space, but the way Spesh explained it makes it sound like their UK inventory was located elsewhere.

revellrider (Feb 8, 2021 at 1:55)
@barp The building that caught fire is mostly offices with a small warehouse area for warranty and servicing.

Their main stock warehouse is at a totally different location. I'm just hoping that all the historic bikes that are located in the showroom area are safe

livehardrideharder (Feb 7, 2021 at 10:56)
The THIRD ebike company headquarters to go down in flames in just a few weeks.... COINCIDENCE?!
Stella, E-bike Amsterdam, and Specialized... am I the only one concerned?

Craigatdescentworld (Feb 7, 2021 at 8:37)
I will cry if the Jason McRoy SWorks and FSR plus kit have been lost - absolute icons of our sport!

2-1RacingUK (Feb 8, 2021 at 3:41)
@Craigatdescentworld , that bike is in the main showroom so unfortunately, if that’s been effected by the fire, it’ll be caught up in it as well.
Guttshot

Wheeeliemann (Feb 8, 2021 at 13:30)
We'll never know, even if it was ebike related, imagine the recall and future sales implications...

VPS13 (Feb 7, 2021 at 19:35)
Once people start modding them for more power like the kids were doing with vapes a few years back they might start spontaneously combusting

MaplePanda (Feb 7, 2021 at 21:18)
@h82crash: It’s firing in the wrong direction. You gotta ride the bike backwards to get that speedz boostz

korev (Feb 8, 2021 at 0:20)
I always wondered what would happen if someone smoked too near a Kirk Precision Magnesium bike...

Chilli911 (Feb 7, 2021 at 8:21)
I believe “the world” is having a really bad year (again!)
Having said that, bikes are selling like hot cakes; Production (and trying to keep up with demand) is the issue

Sirios (Feb 7, 2021 at 11:55)
First their prized bikes were stolen and now a devastating fire ? Hmm ? Their insurance company may be making some inquires .

Dmitry81 (Feb 8, 2021 at 0:01)
wow! looks like the accumulated worldwide hate towards Specialized has finally materialized

thorpey7 (Feb 8, 2021 at 0:43)
Is it a coincidence that the French specialised headquarters burned down recently?

Chrismckernan (Feb 8, 2021 at 6:31)
Seems the Crux is to rebuild the office or Divide the space at the warehouse facility for some added cubicles.

schwaaa31 (Feb 8, 2021 at 7:38)
Serious question. Are the building codes different in England in regards to sprinkler systems?

Dropthedebt (Feb 8, 2021 at 7:56)
They are different pretty much everywhere. Here in the UK our Codes are 'far from optimal' on many fire safety regulations, as the horrific events of Grenfell Tower have shown.

Counsel (Feb 7, 2021 at 14:52)
Specialized is about to collect some insurance money and Brexit right off that island.

pintsize (Feb 7, 2021 at 8:25)
NO, the industry is 30% up and demand is outstripping supply. Most bike companies have sold all their bikes to distributors for the year and most bikes are already allocated to a customer.

rob-chambo (Feb 7, 2021 at 8:58)
Not sure they're all having a great year. I imagine smaller brands are finding it pretty hard to supply anything, and it's hard to make money with no bikes or parts no matter how much demand there is.

DHhack (Feb 7, 2021 at 10:56)
@speed10: majority ownership is still the original founder of the company afaik. Unlike YETI, Santa Cruz and so, so many others.

Chuckolicious (Feb 7, 2021 at 15:21)
@Afterschoolsports Show us on the dolly where the mean S-Works touched you.

iammarkstewart (Feb 7, 2021 at 11:17)
@Dropthedebt: I'm slow with the GTranslate, swapping tabs and all, but good to see English isn't the only place to have a good back and forth.