Spotted: A Prototype GT That Looks Like a Sanction (Updated)

Join Pinkbike  Login
Update: Noga Korem has also shared what looks like the same bike, albeit with different paint, in her last three Instagram posts. A post from this morning has a clear view of the idler pulley. Whether it's a new Sanction or the next carbon Force, it does seem safe to say that this bike will be a long-travel, high-pivot, enduro something-or-other. 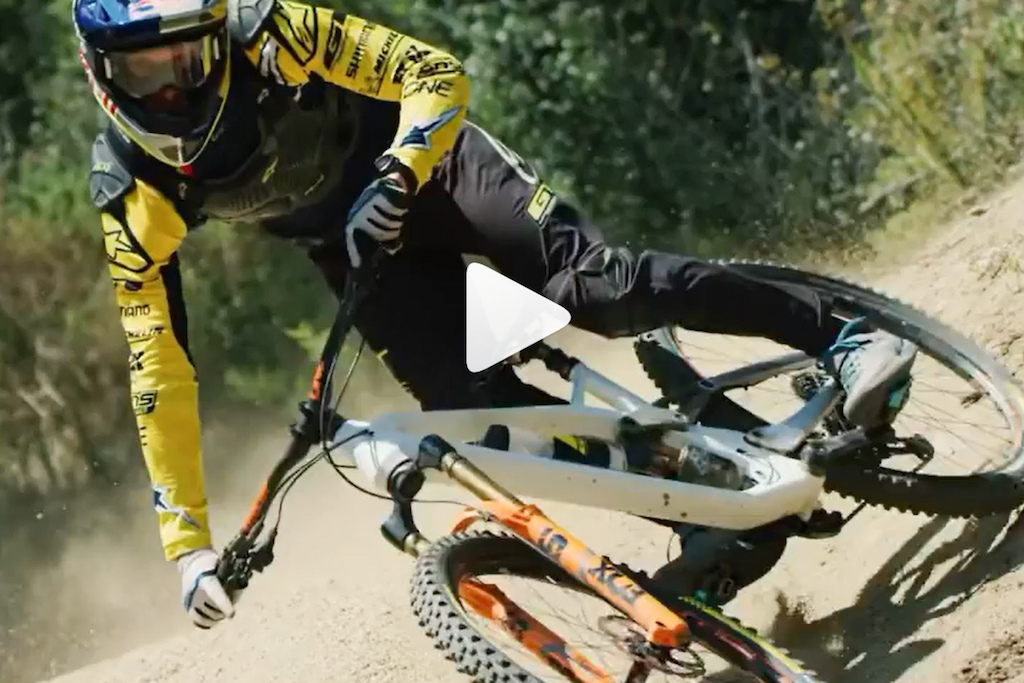 Martin Maes and Wyn Masters have been teasing a new GT frame that we suspect may be a new Sanction, GT’s long-travel enduro bike that hasn’t seen an update in a while.

When GT released the Force 29 in 2020, the bike grew to more or less take the older Sanction’s place as GT’s flagship enduro bike, but in the age of ever better do-it-all setups and enduro bikes with dual crown forks, it wouldn’t be a surprise to see an aggressive new mini-DH sled from GT.

It also wouldn’t be a surprise to see a new Sanction borrow suspension design from the most recent Fury. After all, that’s what happened in 2014.

GT released the second-generation Fury in 2013 with redesigned suspension and a “floating bottom bracket” that allowed for a relatively high main pivot without too much chain interference as the bike moved through its travel. The following year, GT introduced a new Sanction with a pretty similar design. 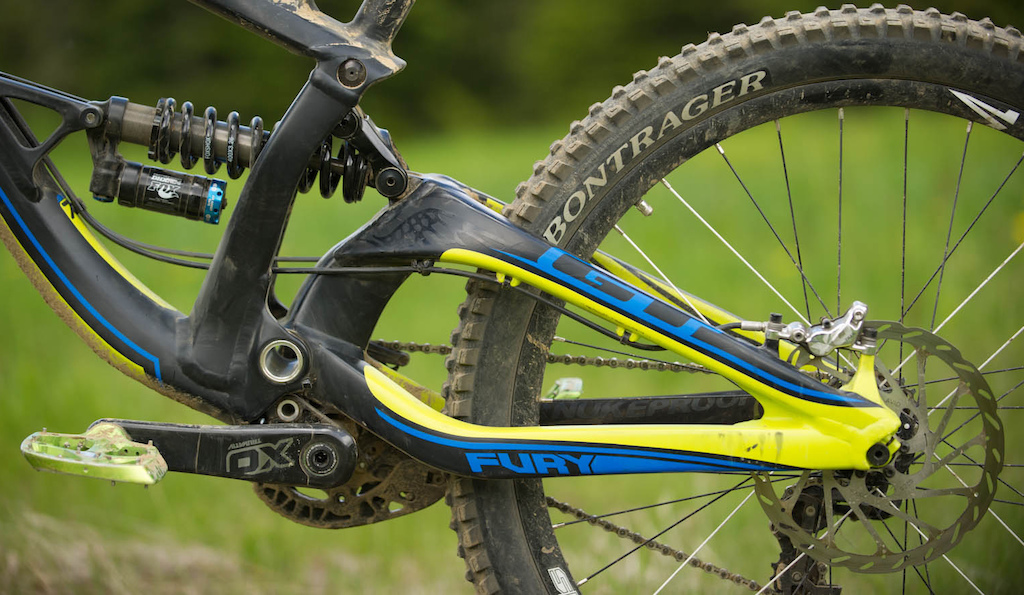 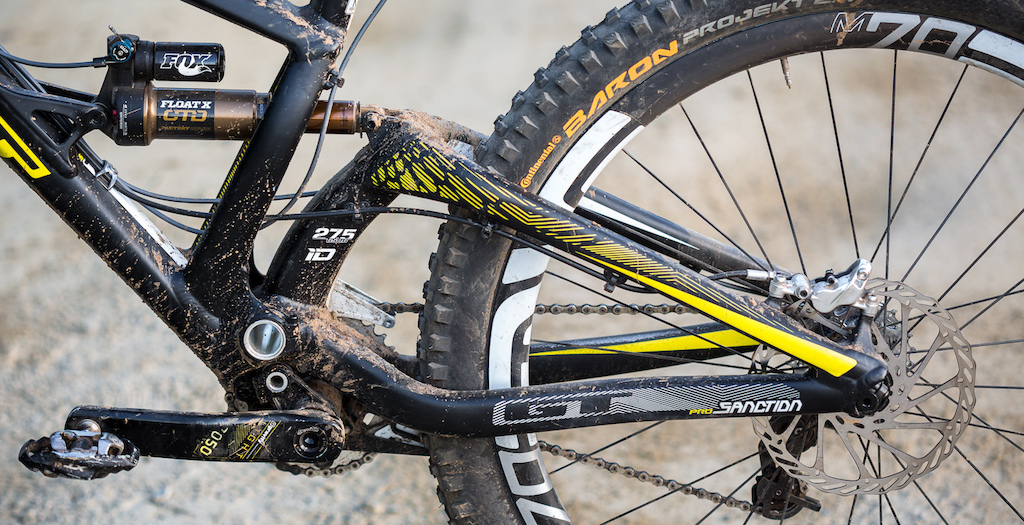 2013 Fury vs. 2014 Sanction.
The 2019 Fury 29 saw a departure from that design with the introduction of an idler wheel to accompany a high main pivot. From what we’ve seen of this new bike so far, it might once again be the Fury’s lookalike younger sibling. 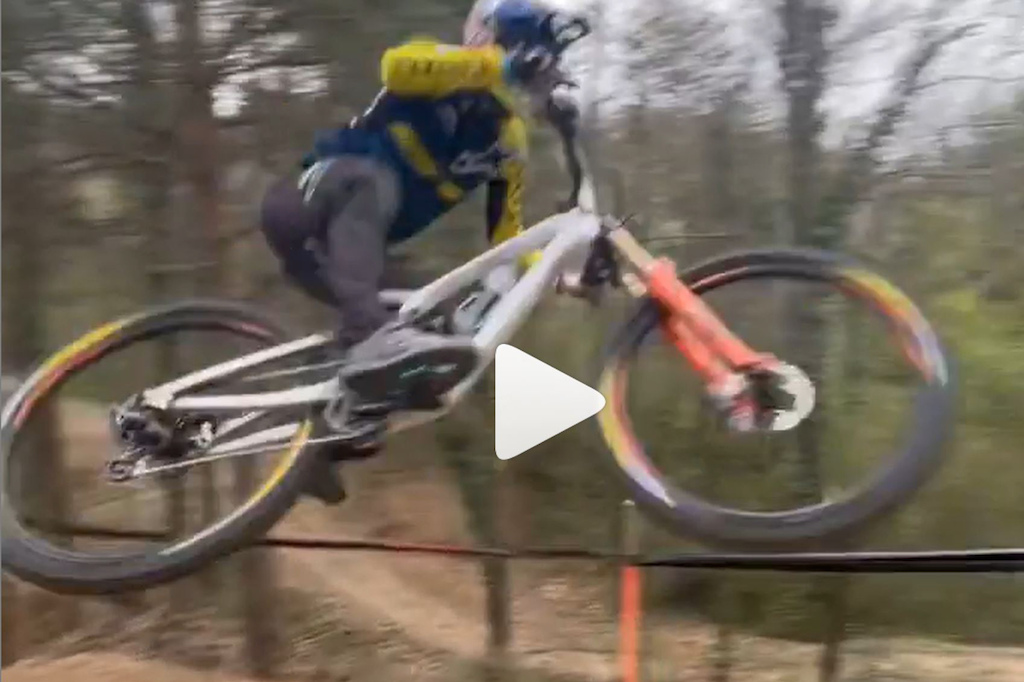 High pivot? Based on the chain here, it sure looks like there's an idler pulley.
All of this is just speculation, but it looks like Martin and Wyn are riding the same frame with forks ranging from a Fox 36 to a Fox 40, again pointing to the mystery bike falling somewhere between the Force and the Fury in GT’s range.

While we're here starting rumors, the fact that Wyn raced downhill on the frame may be an indication of the bike industry's trend toward long-travel bikes that can run either single or dual crown forks, like the Rocky Mountain Slayer and the Yeti SB165. We're not saying downhill bikes are dead, but the industry does seem to increasingly develop these boundary-blurring rigs rather than focus on strict downhill bikes, and we'll likely see several companies (like Rocky Mountain) phase out their downhill bikes over the next few years.

We have reached out to GT for comment and will update this story with any new information.

WRCDH (Apr 12, 2021 at 23:58) (Below Threshold)
The last “video” works! And the DMX track is so right (unlike most MTB Instagram videos with agonizing modern rap that’s cringingly ill-fitting on so many levels, haha). But I was surprised Wyn didn’t pick Ruff Ryders’ Anthem to pay tribute to DMX: youtu.be/ThlhSnRk21E

Unrealityshow (Apr 13, 2021 at 7:52)
@NotNamed: NSMB.com wrote an opinion piece on how it’s shitty of Pinkbike to post spy shots. Pinkbike responded with a podcast saying it’s their responsibility to do so as journalists. Internet commenters took this as the beginning of a feud.

lkubica (Apr 13, 2021 at 8:11)
@Unrealityshow: Not only this. PB posted a spy shot of a bike mounted on a rack, parked in front of some shopping center. Apparently the genius who tried so hard to keep a bike prototype under cover was somehow affiliated with nsmb. So the nsmb wrote an article on how immoral is to post spy shots... I mean, I respect anyone's opinion as long as it is not just made up for some shitty reason.

jaydawg69 (Apr 13, 2021 at 8:25)
@lkubica: the guy with the prototype was not affiliated with NSMB. Way different posting up shots from races than sneaking around to get the "shot". NSMB is enjoying the added publicity for sure.

You mean stopping on the way to/from a ride at the same coffee shop/etc. as some dude who's testing a "secret" prototype who leaves it out in the parking lot on a rack on back of a vehicle for all to see and who doesn't think maybe to cover that shit up if it's so "secret"...

stiingya (Apr 26, 2021 at 15:08)
@jaydawg69: If it was on private land/course, etc. you would have a point. BUT still, long standing "spyshot" norms are that "if" the shot can be taken then it's for the photographer to take. Be that with a super long lens, or walking up behind a truck and shooting under the bumper.

It's not like they were disrupting their training session to get the shot.

bajbus (Apr 12, 2021 at 22:55)
GT has been making very nice bikes lately, force is much nicer than the new session in my opinion where the trek practically copied the GT

tbev (Apr 13, 2021 at 6:02)
Pretty sure I saw some version of this bike in Dupont NC this week. Bunch of GT people and someone on a flat grey bike that had the same general frame shape but no markings. Looked really good in person.

seanb4 (Apr 12, 2021 at 22:59)
I'd say it's probably more likely to be a carbon Force, since that bike is already 170mm travel up front it wouldn't really make much sense to make a new Sanction. Upon looking at these videos, the head tube has the same lines that the carbon Sensor has, making it very likely to be a new carbon bike. It also has the same lower shock mounting point as the carbon Sensor, which is slightly different than the aluminum lower shock mount (I had an aluminum Force so believe me here). If I had to make a bet, I would say it's a carbon Force that they're testing out "freeride" and enduro setups on

Trudeez (Apr 12, 2021 at 23:09)
I dunno, the force is still only 150 out back and I can definitely see their racers wanting something 170-180. I cant imagine Wyn would run a dual crown on something with 150mm rear travel. And, GT don't currently offer anything in that market - where the Sanction used to be.

seanb4 (Apr 13, 2021 at 15:37)
@Trudeez: yeah i mean it's very possible to be a new sanction as well, just seems odd that they would go straight to a carbon version when the current force and the old sanction were never offered in carbon. My thinking is that they used the last two years to test and refine their aluminum force before finalizing it in carbon

Trudeez (Apr 13, 2021 at 16:10)
@seanb4: both the current Fury and current Force 27.5 released as a carbon only versions. Also, Wyn and Marty have both been seen on test mules of this bike for several months so they may have been running alloy versions hammering out the details. Grainy spy photos don't reveal much.

seanb4 (Apr 14, 2021 at 8:49)
@Trudeez: I'm not up on the Fury stuff lately because I don't pay attention to DH bikes much. But I do know that the current Force 27.5 was offered as a carbon/alu frame or a straight up alloy frame, I had a Force 27.5 from 2019 that was alloy. The new Force 29er has been alloy-only for the last two years, so that's why I'm thinking this new bike is a Force 29 carbon. I feel like they would use the alloy bike to test how it works and how well it sells before introducing a carbon version of it

chakaping (Apr 13, 2021 at 0:38)
About bloody time they made a proper enduro bike again. It seemed Martin was compromising or bodging a workable race bike in recent years.

hgrenade (Apr 13, 2021 at 18:56)
I think this whole obsession with the high pivot idler pulley is weird. It's an old ass design. Amaury was fast on the Supreme but I get the impression that he would be fast on any bike. There must be other ways to get some rearward axle path.

Warburrito (Apr 15, 2021 at 11:47)
Floating BBs like those used by Mongoose, GT, etc can have a high pivot without the need for a pulley. My most recent frame purchase is a Mongoose Nugget from around 2010 and I'm super excited to build it up. I'm not sure why they moved away from their FreeDrive suspension. It may be ugly and conplicated but I still like it better than most modern designs. The combo of Freedrive suspension with more modern geometry would be amazing!

DavidGuerra (Apr 17, 2021 at 5:51)
This ingrained idea that newer is better is very strange and makes companies change just for the sake of changing. Where does this idea come from? And besides that, most bikes nowadays run a plain basic four bar design, but no "old ass" comments about that? That's even stranger.

Afterschoolsports (Apr 13, 2021 at 7:41)
A high pivot long travel trail bike is precisely on my shopping list. Bring it on.

hamncheez (Apr 13, 2021 at 7:30)
so whats the point of Cannondale and GT being separate brands anymore, if their suspension technology and general frame layout has completely converged?

send-it-bro (Apr 13, 2021 at 4:45)
Why r u putting pictures with a play button in here???
I got to click play and it takes me to the dumb gallery thing.
Wow, I would think they would have these without the play.

I already have my Giga on order.