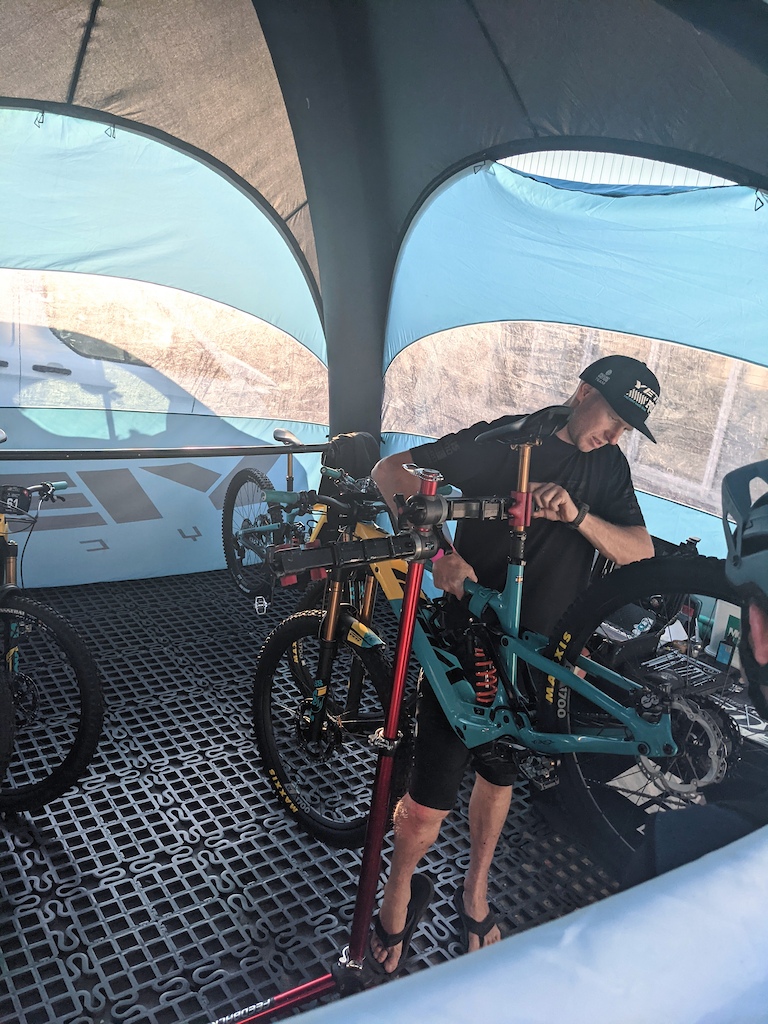 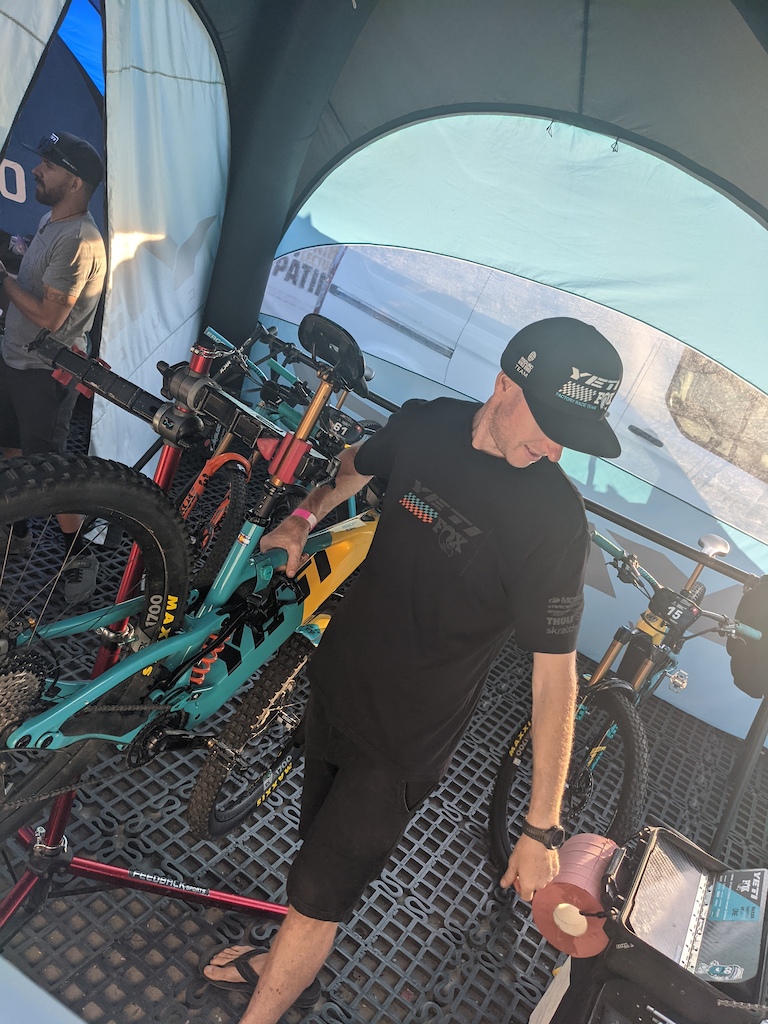 Last month, we wrote about Yeti's new eMTB after multiple readers spotted the bike out and about in Colorado. Now, it's being raced at the EWS-E in Crans-Montana, Switzerland, by Jared Graves, Jubal Davis, and Shawn Neer.

We were sent two new photos of the bike showing better angles. The photos confirm that the bike does use a Shimano EP8 motor and a six-bar suspension layout, with a short link that connects the chainstay to the frame, another link between the shock and seatstays, and then a long link that runs between the upper and lower link. It's reminiscent of the design that Commencal has been experimenting with on their DH bike this year, which Dan Roberts analyzed here.

Zooming in on the top tube reveals a 160e marking, more or less confirming that the bike will be a 160mm travel bike, in line with what most riders will be racing at the EWS-E race this weekend. That puts it right between the SB150, which Richie Rude and Yeti's other EWS racers ride, and the SB165, a 27.5" mini-DH machine that is intended more as a playful freeride rig than an enduro bike.

Jared Graves had a big crash a couple of weeks ago and injured his shoulder so he didn't start at the Loudenvielle EWS last week, but it looks like he'll be back on the race course at the end of this week on the new eMTB, though of course he hasn't officially announced that as the bike is still under embargo. Still, he's on the start list.

Shawn Neer and Jubal Davis are also on the start list, and although their Yeti-Fox Factory Team affiliation isn't included on the entry list, we can expect to see three Yeti eMTBs out on the course.

Note: Yes, some of our editors have had the chance to ride this bike and know more details about it. They have not been able to share those details with the rest of the team, as the review process for unreleased bikes relies strongly on trust. If you'd like to learn more about how we treat embargoed products that get spotted before they launch, click here.

StinkyTO (Sep 9, 2021 at 7:45)
@inonyme: thanks, I know Ram Jam was the original band, I believe the PB user I responded to was asking about the cover used in the NWD series.

Lousicle (Sep 9, 2021 at 17:41)
Carbon mountain bike parts are a terrible idea. Unless you own one. Until you will all crack carbon parts and really hurt yourselves, then you will agree.

DylanHunter (Sep 8, 2021 at 21:44) (Below Threshold)
Can’t tell if this is sarcasm because yeti has been doing this color way for decades

hockeyyetiboy (Sep 9, 2021 at 3:40) (Below Threshold)
wow....yetis been doing that color scheme since the 90's...probably longer than youve been alive or riding

Almazing (Sep 8, 2021 at 15:55)
Kinda disappointed it's not a high pivot with an idler like the Yeti patents. 6-bar suspension is cool, but on a pedal assist, I'm not really worried about pedaling efficiency anymore. Less anti-squat, less anti-rise, and more mechanical progression is the way for e-bikes.

Bhaack (Sep 8, 2021 at 20:32)
The motor looks to be positioned really low to make room for that system. Wonder what the details are and what that means for ground clearance when riding.

rol79 (Sep 9, 2021 at 1:20)
I still do not like the EWS-E an all the E-bike evens. It's becoming to much to follow. It becomes very material intense if you are working with younger riders. It is good for the brands and for normal folks with some a little hight input of beer and food but otherwise it is just to much. Cycling was fun and now we carry batteries through the woods. I think it is silly

SingletrackNinja (Sep 8, 2021 at 16:41)
I couldn't care less about their e-bike, but I am eagerly waiting to see if the new suspension layout filters to their mountain bikes and how they might ride.

sngltrkmnd (Sep 8, 2021 at 18:49)
@LuvAZ: I can sorta kinda see popping for a Turq if your Yeti is meat-powered, but e-powered? Seems a waste. Unless there is more to than couple hundred gram weight savings.

big-red (Sep 9, 2021 at 5:59)
@brandaneisma: Thank you! I know Yeti's are expensive. But part of their reputation is just because they don't do a full range of bike products, just one line of high-end rigs. When I check out Trek's or Specialized's offerings online, their similar-quality bikes aren't crazy out-of-line with Yeti pricing. I just googled a quick example: Specialized Stumpjumper EVO pro is $8.600USD. SB130LR T2 is $8,000, or $8,800 with AXS (to make it comparable). The similarly-specc'ed Trek Fuel EX9.9 XO1 is also $8,000 (without AXS...also for some reason you could save $500 if you could find it in the orange colour scheme). Rocky Mountain's Instinct price points fall above and below at $9800 and $7250, but the spec value appears to be in-line with all the others as well.

The reality is that Yetis and other smaller high-end-only brands aren't that much more money than the equivalent bikes from companies that offer a full range of products. Sure, sometimes there's a small premium to be paid, but not always and not as much as people on PB would have you believe. Now...if you're good at taking care of your own equipment and not too worried about warranty issues, direct-sale brands do tend to offer a noticeably better value. That's where I'd be looking next time I need a new bike.

Almazing (Sep 9, 2021 at 7:04)
Nah. If there's one thing Specialized knows how to do extremely well, it's keeping the highest priced bikes crown.

IanJF (Sep 9, 2021 at 6:24)
Do a search for inflatable tents and/or canopies. They are pretty common for teams that need to travel light.

Staktup (Sep 11, 2021 at 21:27)
Is this the mystery bike that failed horribly on the huck 2 flat? I think Levy, Beer & Quinney said they couldn't talk about it yet but I heard the word "embargo" used in the same or next sentence... Rocky Mtn is breathing a sigh of relief in any event...

crussell (Sep 8, 2021 at 14:26)
I keep seeing them on the Green Mountain trail network in Golden, CO. I think they are being used for lunch rides from the headquarters.

bman33 (Sep 8, 2021 at 16:38)
@extratalldirtrider: Green Mountain basically sits in the Lakewood /Golden border if you are getting that detailed

mcozzy (Sep 8, 2021 at 23:16)
I'm waiting for transition to eat a large slice of humble pie when they release an eeb before their market share dwindles away. Delicious.

b45her (Sep 9, 2021 at 4:36)
@mcozzy: dude any brand without an ebike in the range isn't going to be in business in a few years time, the high end bike market is disappearing fast. probably get 10-15 enquiries about ebikes to every 1 for a regular bike.
outside of like hunting on pinkbike the ebike hate brigade are very much a minority.

DanKaplan (Sep 8, 2021 at 14:49)
I wonder if people in Colorado are going to be telling Yeti to go back to California with this ebike? After all it doesn't fit with Colorado mountain biking culture, at least according to one local I crossed paths with in Crested Butte this summer.

I wouldn’t take a Crested Butte local’s opinion as representative of the rest of the state.

DanKaplan (Sep 8, 2021 at 15:37)
@salespunk: I was giving noah a tow while he was on the Evo. I think that's what pissed him off. Btw Noah managed to destroy the rear wheel at Winter Park even though you had installed Cush core.

extratalldirtrider (Sep 8, 2021 at 16:02)
What are you talking about? I see e-mtbs out here every time I ride. I’m not a fan of them but they’re here to stay and will only gain popularity.

chacou (Sep 8, 2021 at 16:25)
There's still "locals" in Crested Butte!? I thought it was all short term vacation rentals and vacation homes. The prols all live 30 miles down valley in Gunny.

extratalldirtrider (Sep 9, 2021 at 5:00)
@FrostyMugKiller: yes and we’re all some of the worst types of people around. We trash everything and are rude to everyone in our path.

initforthedonuts (Sep 9, 2021 at 7:05)
@extratalldirtrider: so true. So best save yourself the troubles and not visit. Nothing to see here anyway.

extratalldirtrider (Sep 9, 2021 at 8:37)
@initforthedonuts: too late - I already moved to CO from CA and there’s nothing anyone can do about it expect complain and bully online. Good luck, mate!

initforthedonuts (Sep 9, 2021 at 14:32)
@chacou:
Video is so dated. Everyone knows Oklahoma is the enemy these days

coriordan (Sep 9, 2021 at 1:45)
I wonder why they went with official Yeti colours and not the 'mule' colours you see on unreleased bikes (or cars)?

skimons (Sep 12, 2021 at 5:54)
looks like the bike is already part of shimano's new step advertisement in the banners on this site. nifty marketing.

AyJayDoubleyou (Sep 8, 2021 at 15:39)
Someone must have that model of work stand - measure the clamp and scale to tell us the dropper travel please

malobalo (Sep 8, 2021 at 17:45)
Poor Young yeti haters always grow up to be poor old people who keep shouting “guys driving a Ferrari have a small dick” …. Envy is an unfortunate disease that gets worst as you age.

Yeti envy or Envy on a yeti?

itssadbutdrew (Sep 8, 2021 at 19:05)
horst-linkish rear swing arm pivot with switch infinity main pivot. vertical shock.... There is lots more going on there than a motor y'all.

mrfish (Sep 9, 2021 at 1:09)
Imagine a E yeti is going to have a limited marked, after all there’s only so many Billionaires in the world

brass-munky (Sep 9, 2021 at 1:57)
I straight up don't care about a yeti ebike. Upper level doughey rich guys can flex on each other better now, great.

Photo 2 shows:
So heavy that the mechanic has squeezed one out in his pants and needs a wipe.

dexterfawkes (Sep 8, 2021 at 17:14)
@Chives09: thanks for the correction, I had absolutely no idea what you meant without the correction

headshot (Sep 9, 2021 at 6:13)
Woo-hoo an even more overpriced eBike soon to be avIlable
Below threshold threads are hidden

mitch1992 (Sep 8, 2021 at 19:09)
Note: Yes, some of our editors have had the chance to ride this bike and know more details about it. They have not been able to share those details with the rest of the team, as the review process for unreleased bikes relies strongly on trust.

I wonder how Yeti feel about you sharing pictures some tool took by sticking a camera over a tent wall that was put up to stop people from seeing in... Trust seems strong.

When its out in the open, fair game but inside a tent, come on, be respectful.

edfw (Sep 8, 2021 at 21:11)
This is all scripted to create fake hype… Yeti tells Pinkbike when to release such „spy shots“ and supplys the pictures alpng the way!

mitch1992 (Sep 8, 2021 at 21:52)
Well if this is fake hype implemented by Yeti, it would be hypocritical for them to ever get annoyed about people taking pictures over their tents in the future. All this does is condone this sort of behavior. Companies do get pissed when someone points a camera into somewhere that is clearly setup to limit the view of public and takes photos. Yeah they might be "spy" shots but its bad taste. Just wait till the bike leaves the pit. Chances are, if the company doesn't want you to see something, they hide it or disguise it for when it leaves the pit.