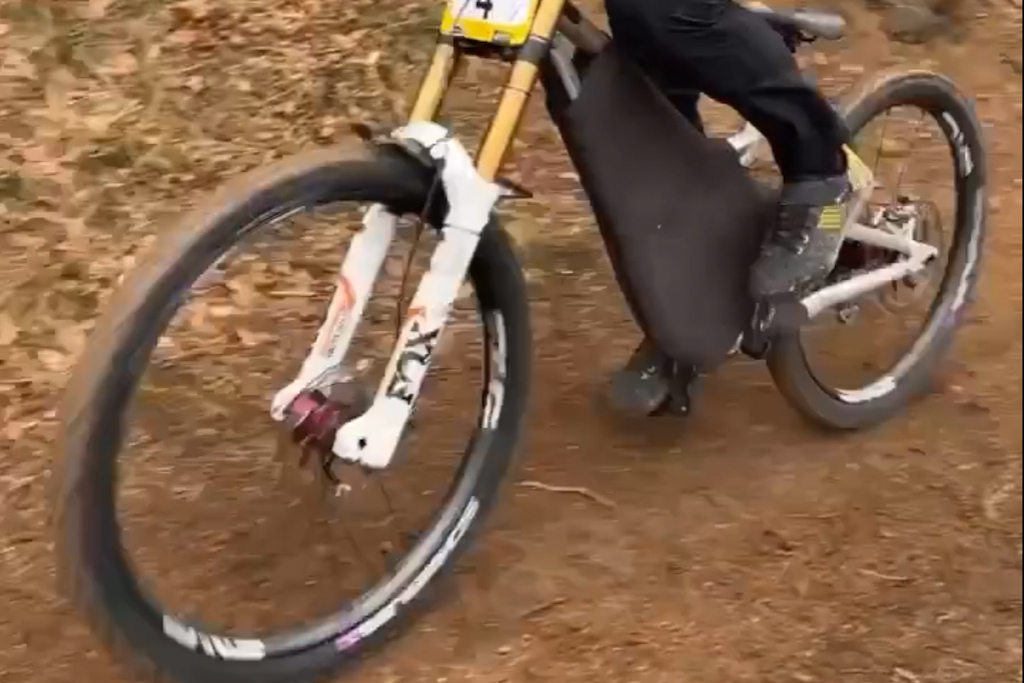 It appears that Commencal may have a new DH ride in the works judging by Loic Bruni's Instagram story this weekend from Spain at the 4 Rider's Bike Park. The bike was well covered up but it appears that the rear end has undergone some major updating.

Comparing the current Supreme DH and the bike Pierron is riding, the stays and linkage are different with the new seatstays running straight. Most telling, there's also now a pivot on the chainstay. Now, at first thought, the axle placement screams Horst link but, it does appear to be more of a conventional chainline than a high-pivot so it could be a bike park bike of sorts like Commencal's Clash, rather than a high-pivot race bike. We have heard that there's still an idler pulley but, it's a bit different placement and lower than the Supreme's.

Our best guess at the moment? It's still a single high-pivot system but with a shock more in a tunnel through the seat tube and the chainstays are one of the links that goes to compress the shock. One more bit of noteworthiness, the chainstay length appears to be adjustable at the axle. 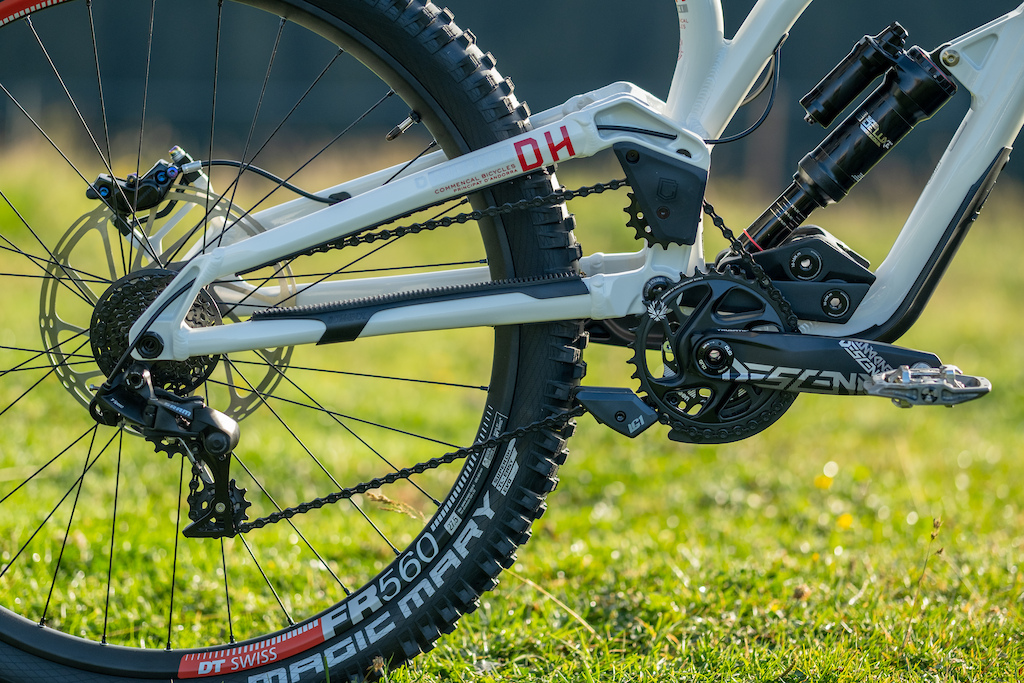 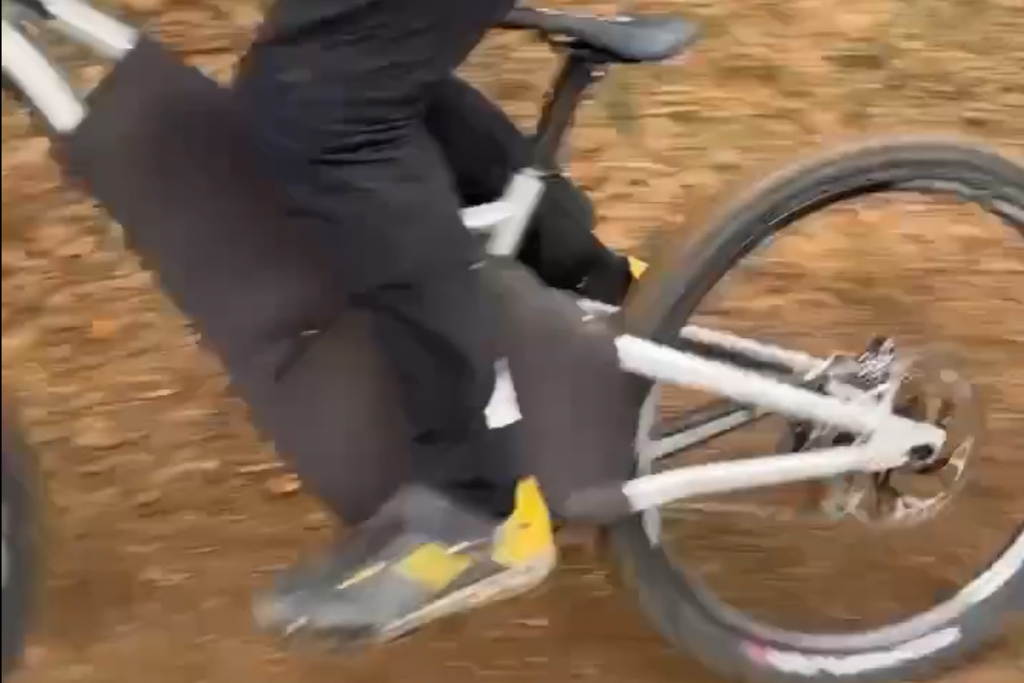 Big differences between the current and prototype in the back end.
Another photo we found gives a better look at the chainstay style pivot and adjustable chainstay as Pierron is folding his rear tire over in a turn. 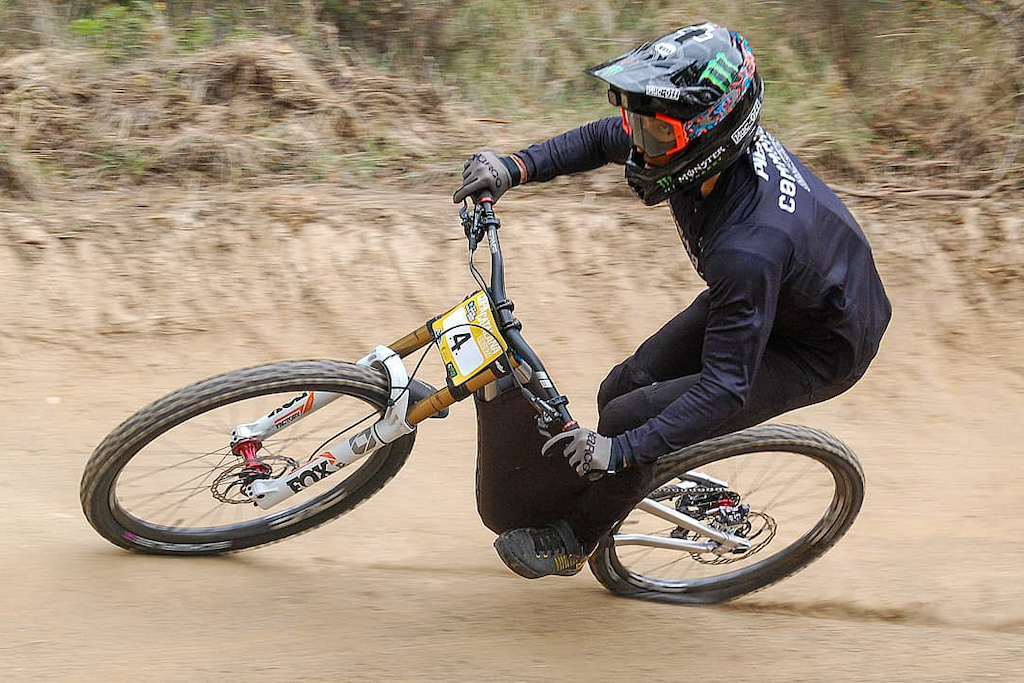 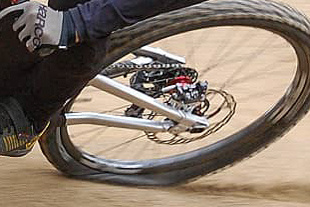 We've reached out to Commencal to see if they have any other details to share and we'll keep our eyes open and provide an update if and when more information emerges.

southoftheborder (Apr 12, 2021 at 8:10)
Plot twist: Because of the Coronaggeddon, Amaury has now a side job as a delivery boy. He carries baguettes and wine in that bickepacker pouch.

mountaincross (Apr 12, 2021 at 8:21)
New design with room for two bottle mounts and a sneaky place to store a banana inside the seat tube

justwaki (Apr 12, 2021 at 8:34)
@mountaincross: now all WC racers must watch the Monthy Python sketch on how to defend yourself against a man armed with a banana.

Theguyfromthealps (Apr 12, 2021 at 9:05)
Plot twist, there's absolutely nothing to hide under there, just taking the piss out of everyone!

dolmen (Apr 12, 2021 at 9:34)
It's clearly a frame bag! Amaury is switching to adventure downhill racing this season.

southoftheborder (Apr 12, 2021 at 11:16)
@SonofBovril: Baguettes can't fit inside any of those tiny compartments. I have no proof, but neither I have doubts!!!

chakaping (Apr 12, 2021 at 8:05)
Haha, a lot of nineties/early-noughties bikes would have been improved by one of these.

Sprockingcrail (Apr 12, 2021 at 7:20)
Looks to me like he's testing a new DH bike packing bag. Probly has a tent, chair, and a bottle of whiskey and some jorts in there.

sjma (Apr 12, 2021 at 8:46)
Man I saw a post on instagram of a guy in the middle of a 90+ mile bike packing trip during a refueling stop on a Meta AM. It might still be on gasstationfoodcyclist's story right now. Careful what you wish for.

FMHUM (Apr 12, 2021 at 6:55)
Nice to see bike manufacturers go the automotive route and cover your damn product if you don't want people to see the details about it.

SleepingAwake (Apr 12, 2021 at 7:42)
The main pivot could very well be on the seat stay. I am working on a bike like this, there are a couple renderings in my profile. Not claiming it is my idea, just can't think of any other bike with this setup right now...

the-vault (Apr 12, 2021 at 7:51)
@SleepingAwake: The Zerode G1 and G2 had that system. The later versions of the I-drive bikes were doing something similar to that also.

justinc5716 (Apr 12, 2021 at 7:55)
It's going to be a seat stay pivot, with the chain stay actuating the shock linkage like on a DeVinci Wilson. They might've run into some tuning limits of the old linkage. I'm surprised the brake is still mounted to the seat-stay as that continues with the very high anti-squat of the old bike. Mounting on the chain stay (again like the Wilson) would allow tuning of the anti-squat to lower values. Makes me wonder if anti-squat values >100% are the way of the future and part of the Supreme's secret sauce.

ThadQuinn (Apr 12, 2021 at 9:51)
@SleepingAwake: going into the way back machine, the GT rts, sunn chippie bike that nico and Anne caro dominated the world on. Devinci Wilson similar concept, but concentric at axle.

grizzlyatom (Apr 12, 2021 at 10:26)
@justinc5716: I think you mean anti-rise (aka brake squat), but I totally agree with you on both fronts. I'm sure this design iteration is primarily based around how the linkage drives the shock, not the axle path. I'm betting it's still a high single pivot bike. I also think higher anti-rise numbers might just be the trend of the future.

SleepingAwake (Apr 12, 2021 at 10:32)
@CustardCountry: never actually ridden it. Was more to figure out if bladder Inflation moulding in composite moulds would work. Gonna make one for the diy mtb tho

F22 (Apr 12, 2021 at 12:21)
@SleepingAwake: Any particular reason why you chose to put the rear pivot concentric to the axle? Wouldn´t it be beneficial for packaging to put it in the seatstay like commencal has seemingly done? Shouldn´t effect suspension much, or am I missing something?

SleepingAwake (Apr 12, 2021 at 13:27)
@F22: yes the idea is to make sure the brake torque does not influence the suspension movement. I already have a high amount of anti-rise with the high pivot design, and as I understand it this could to some degree be counteracted with a different pivot placement, but honestly the whole brake side of suspension is still somewhat of a black box and this neutral starting point made the most sense to me.

justwaki (Apr 13, 2021 at 6:23)
@SleepingAwake: thank you for designing actually wonderfully looking bikes. I applaud anybody doing something on their own but there’s a bit too much whacky steel tubing made by folks who claim their stuff is superior and it looks like it because there were no compromises taken when it comes to geometry and suspension action. Lousy excuse really. Bikes like Zerode Taniwha or Forbidden Druid are excellent examples of taking a unique approach and making it look really good in the process. Then you have BTR and Swarf who took time to make something appealing out of what normally would end up as an ugly duckling. Same with Kingdom Void, they really refined the design. It may be that Steam Punk is just not my thing.

SleepingAwake (Apr 13, 2021 at 7:05)
@justwaki: haha thanks but wait with the compliments until I fleshed out something really. Might turn out all kinds of crooked. Lot of work between the renderings and a final bike. Currently building the cnc I need to make it as well...

Code98 (Apr 12, 2021 at 7:23)
Yall are off the mark. That thing is for big Aero gains , plus strong ground effect for extra grip. Next up is a big fast and furious spoiler on the rear axle.
Maybe turbofan wheels for brake cooling?

onemind123 (Apr 12, 2021 at 7:58)
Advantage of the big carry handle wing is it can hook into chairlifts easier for the ride back up. May become mandatory at all lift access bike parks.

FuzzyL (Apr 12, 2021 at 7:51)
Looks like he’s also off Commencal. Somehow I can’t really believe, they would really switch to a four bar design.

tonkatruck (Apr 12, 2021 at 7:05)
i wouldnt be surprised if they doing the a-la-mondraker style suspension again, with the FSR rear pivots

johnny2shoes (Apr 12, 2021 at 7:29)
I'd absolutely love it if it turns out to just be the current Supreme but by covering it up they've got us all excited

skidrumr (Apr 12, 2021 at 9:47)
Mechanic verifies it is a weighted blanket to both eliminate all vibration and calm the rider

maxxx (Apr 12, 2021 at 7:05)
It is if the main pivot acts on the seat stay and the chain stay drives the shock. Kind of like the split pivot Devinci Wilson but without the linkage being concentric to the axle.

lkubica (Apr 12, 2021 at 8:02)
@ninjatarian: Devinci Wilson is a split-pivot. It has a pivot not on chainstay, but on the rear axle. It's something completely different.

I get that it might be that the main pivot is really on seatstay and it is kind of reversed faux-bar (single pivot with an extra link). But why would they do it?

squarewheel (Apr 12, 2021 at 8:16)
There are at least two different rear ends in this article. One with and one without a chainstay pivot.

maxxx (Apr 12, 2021 at 9:13)
@squarewheel: I think it might just be the motion blur in some of the video stills is hiding some details