Spotted: Danny Hart is Testing a Mullet Set Up on his Cube Downhill Bike 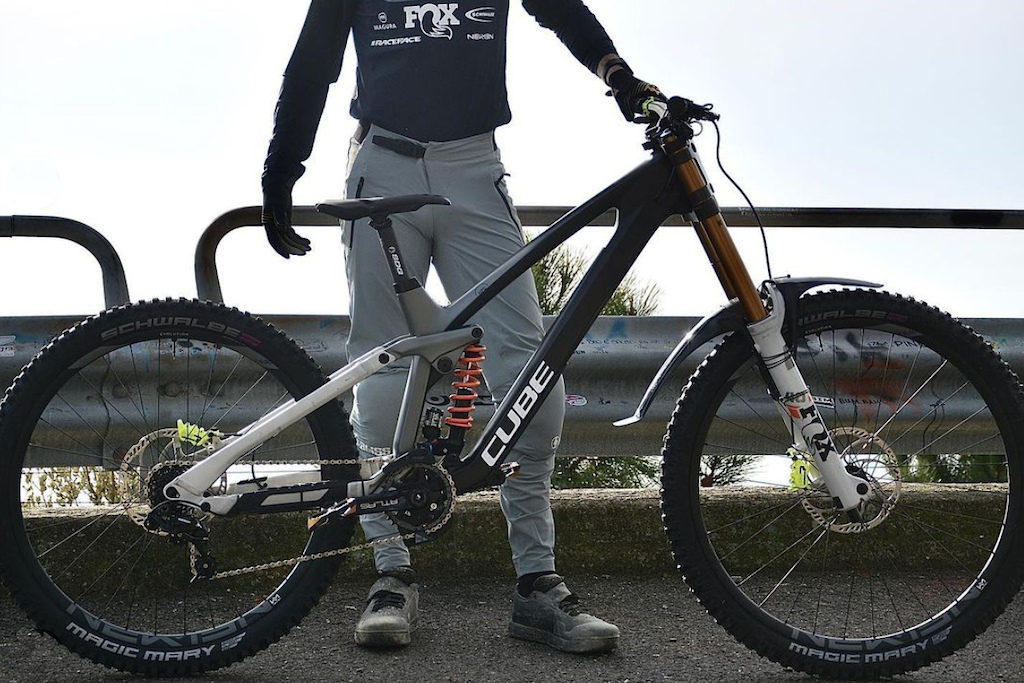 Photo: Danny Hart's Instagram
Danny Hart has managed to escape the snow of Britain and headed down to San Remo on Italy's Ligurian coast for some testing with his new Cube team. Alongside dialling in his pressures and dials on his new ride, we reckon he could be testing a totally new wheel set up on his Two15 HPC downhill bike.

When Cube released the updated Two15 last October, it came in two different guises - a full 29er with a carbon front end called the HPC (High Performance Composite) and a full 27.5er with a full aluminium frame called the HPA (High Performance Aluminium). Noticeably absent was a mullet version of the bike. A lot of downhill bikes released last year, including the Specialized Demo, Mondraker Summum and Canyon Sender, came with a mullet option but not for Cube.

Danny himself first raced a mullet set up at Maribor in 2019 while racing for the Madison Saracen team. He said at the time, "I just felt a little more comfortable on it - the bike's a little bit more agile, and I can get it in and out of the corners better. I'm not the tallest rider, so it seems to work well."

So, what's actually new with Danny's Cube? The carbon front triangle is probably from the HPC model and the carbon link was previously shared by both models so that just leaves the swingarm. We can't tell exactly from the photo posted but we suspect the rear triangle of the bike has been changed to suit the mullet set up on what was already a fairly low slung DH bike with a BB height of 343mm. Whether Cube has made a totally new rear end for the bike or simply swapped in the 15mm shorter HPA chainstays is not clear but there's no doubt something has been done to correct for the change in the geometry. 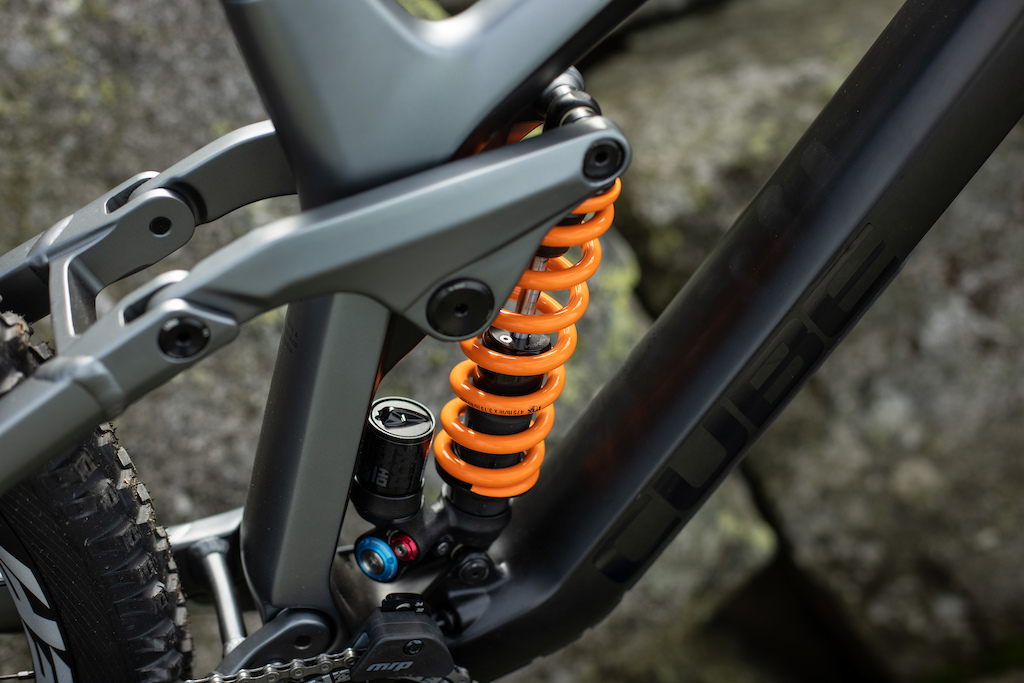 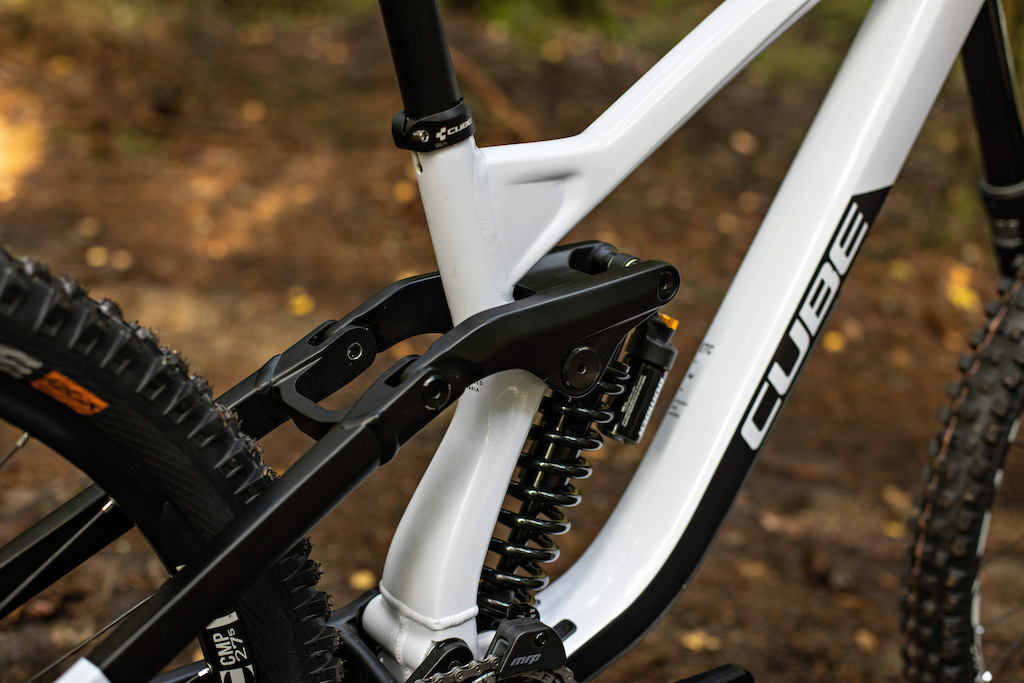 Although they share the same carbon link, the aluminum swingarm of the 29er (left) and 27.5" (right) Two15 is different.
The Cube downhill bike also comes with some in-built geometry adjustment thanks to headset cups that give +/-0.5° of slackness in the head tube. We wouldn't be surprised if the team have taken this further in testing with offest bushings or something similar to ensure the angles of the two bikes are as similar as possible.

It's not yet clear if Danny will take this set up forward to the race tracks or if it will ever be offered to customers either. We've reached out to Cube and Danny for more info and will update the article if we hear more.

caiocrz (Feb 10, 2021 at 11:44)
The saddle has a special shape that allows each ball to comfortably hang on each side, thus allowing for a lower center of mass, increasing performance significantly.

Sirios (Feb 11, 2021 at 4:55)
Wow , that was really new and innovative comment . how did you manage to come up with something so unique and creative .

mi-bike (Feb 14, 2021 at 21:58)
@Sirios: I recommend you look up the difference between "figurative" (as in Warner's original use of the phrase) and "literal" (as in the above -highly creative- comment by @Peskycoots )

privateer-wheels (Feb 10, 2021 at 14:29)
Funny, I came down to the comments to see if anyone else noticed. Good eye, the valve is not framed properly on that one!

Safety first I get it.

maybenotaprofile (Feb 11, 2021 at 0:43)
@zede: The valve usually sits in between two spokes going relatively straight to the hub. When you look at the wheel you can take groups of four spokes to have a repeating pattern. The valve should sit right in the middle of that group. So for appropriate placing the valve should be two gaps further to the right.

zede (Feb 11, 2021 at 1:12)
@maybenotaprofile: ah ok I see, so technically it's the spokes/lacing that are/is wrong then?
Because they can't move the valve hole

two-one (Feb 11, 2021 at 1:31)
Functionally it isnt even that much of an issue, but when a wheelbuilder pays so little attention the valve is wrong... then how correct is the spoke tension? Wheelbuilding is a job for perfectionists. That's why hand-laced wheels are so much better than factory built wheels, or mass-produced wheels from low-wages countries... and more expensive.

wakiisapuddinghead (Feb 11, 2021 at 8:06)
Unless the rim was drilled incorrectly. I have a set in the basement just like that.

bikesbroadcasted (Feb 12, 2021 at 2:03)
@maybenotaprofile: He didn't lace the the front wheel correctly I have done this many times he did the rear perfectly. It doesn't effect the structure on the wheel just esthetics'.

HogtownWheelsmith (Feb 12, 2021 at 5:39)
@zede: The only thing to add to the absolutely correct explanations provided by everyone else is that this cosmetic/attention-to-detail error typically results from placing the “leading spoke” - or first spoke - somewhere other than two holes from the valve hole. On 32-hole rims laid 3-cross and done correctly, you should always have two flanking parallel “columns” of spokes around the valve hole and then opposite it, as well as at 9 o’clock and 3 o’clock. In other words, as with Danny’s rear wheel, those 8 spokes should form a perfect compass: N, S, E, and W.

maybenotaprofile (Feb 12, 2021 at 5:58)
@zede: Yes of course! The rim is allright and the lacing is different/"wrong". It really is just a asthetic manner which is comparable to a tyre not alligned with the valve. Valves are mighty I guess!

ipreferdirt (Feb 10, 2021 at 14:09)
So let me get this straight, the guys that go the fastest in our sport and need to roll over the largest obstacles are saying 29" is too big hmmmm........ you guy really need those wagon wheels on your local trails? nope, not even close

Hmmm, nope no correlation to me #bringback26

giantwhip (Feb 10, 2021 at 12:20)
I wonder how he's liking the size of the frames considering Remy wasn't happy with how they felt

Miko-freako (Feb 10, 2021 at 14:28)
Yeah stopped being happy after leaving cube. Also crashed on the first day on propain frame. Who knows what is he gonna say in few years...

tkrug (Feb 10, 2021 at 19:02)
@remymetailler: you are ruining the fun of talking shit on people because internet with your reasonable responses... please stop.

Or don’t, because I’m interested in your views on the bikes, regardless of who is currently paying you to be awesome.

HogtownWheelsmith (Feb 12, 2021 at 1:36)
@remymetailler: Remy, you drip professionalism. Keep it up! You make anyone collecting an MTB paycheck look that much better these days. Couldn't have been more impressed with the tone you set on @downtimepodcast. How it should be done - whether by a racer, content-creator, or both (in your case). When salaries inevitably rise in the sport down the road, more than a few young guys and girls will owe you a thank you.

jrocksdh (Feb 11, 2021 at 15:21)
@mybaben: it's hilarious to see how riders/builders try to blend those oranges into the build. Then, u may sell ur frame or fork-now ur stuck with orange on the frame or an orange fork..pigeon holes ya.

mybaben (Feb 12, 2021 at 10:09)
@jrocksdh: Yeah, that makes sense. I think a better option is to just embrace and go with the mismatch. Then it looks more custom and factory race IMO. I sort of look at Renthal gold bars that way. I like them because they DON'T match and so look more "pro". In the end though I don't like the white OR the orange lowers. I do dig those root beer ones though.

Bikez1 (Feb 11, 2021 at 7:33)
@grum-p: did you not know . Covid doesn’t go to supermarkets or big warehouses like Amazon . And Covid knows the difference between professional athletes and hobby rider . Covid is smart and knows the difference between you and your mates having fun or a professional athlete travelling with a crew to another country testing and not having fun . TRUST THE SCIENCE