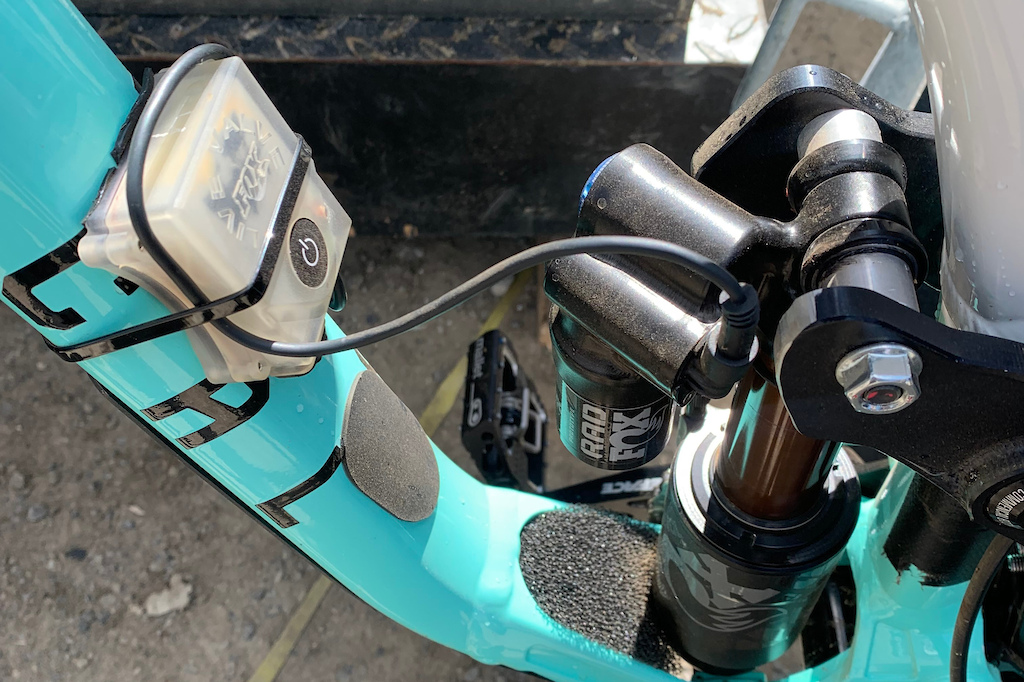 If you haven't seen the race from last weekend, be warned this article contains spoilers. 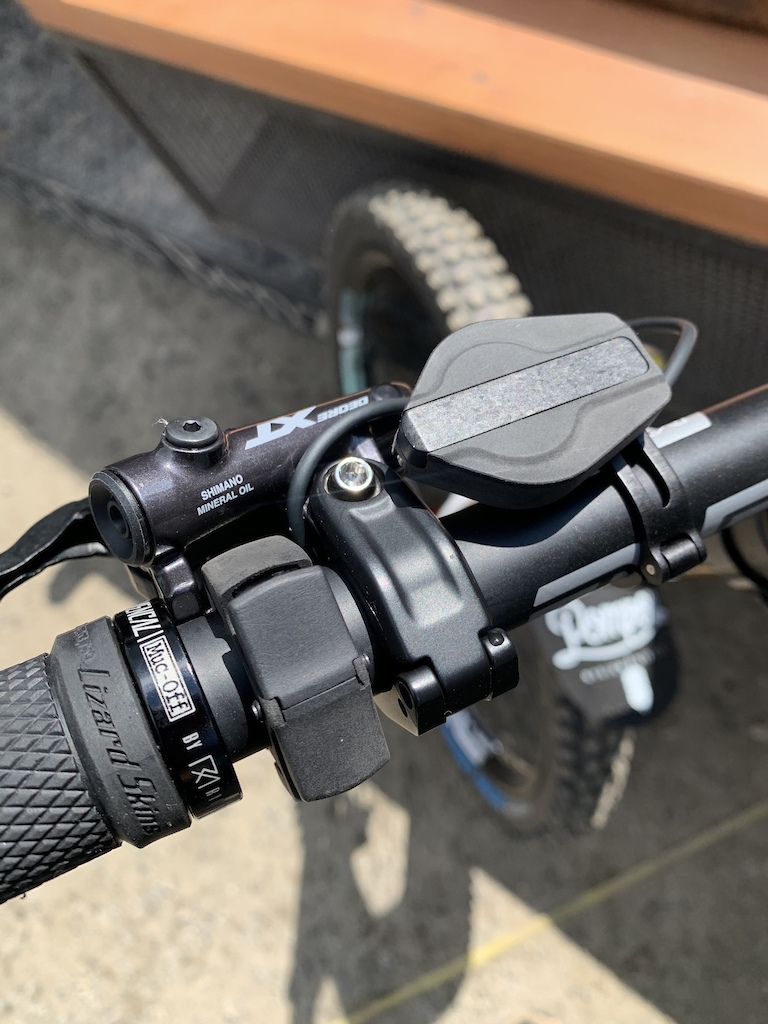 The remote looks borrowed from a Shimano ebike motor and is connected to what could be a wireless transmitter. 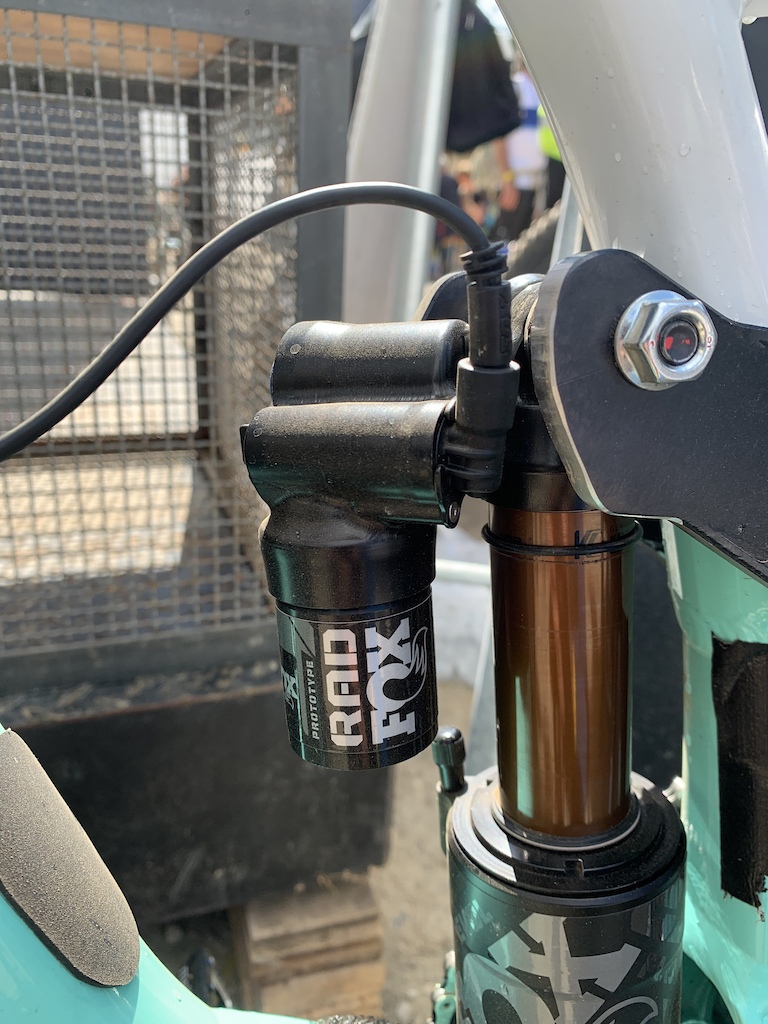 The cable from the plastic box connects to the rebound valve on the Fox Float X2 shock.
There's a box zip-tied to the downtube, connected with a cable to the head valve on the shock. The box has the words Fox Live Valve written on it. Also, there's a remote by the grip which looks like a Shimano EP8 ebike remote, connected with a short wire to something else on the handlebar - presumably a wireless transmitter to communicate with the box. To the foil hat wearers, we're obviously not suggesting this is an ebike-style cheat device, but the fact that Fox has repurposed an existing Shimano remote suggests this is nowhere near production. Sorry, no review tomorrow.

The commercially available version of Fox Live Valve is essentially an automatic lockout which toggles the fork and shock between open and fully locked-out depending on whether bumps are detected by accelerometers. But while we've seen remote lockouts used at World Cups before, any kind of lockout doesn't sound particularly useful at Lenzerheide; also, this system isn't automatic (at least not fully automatic) given the remote on the handlebar. 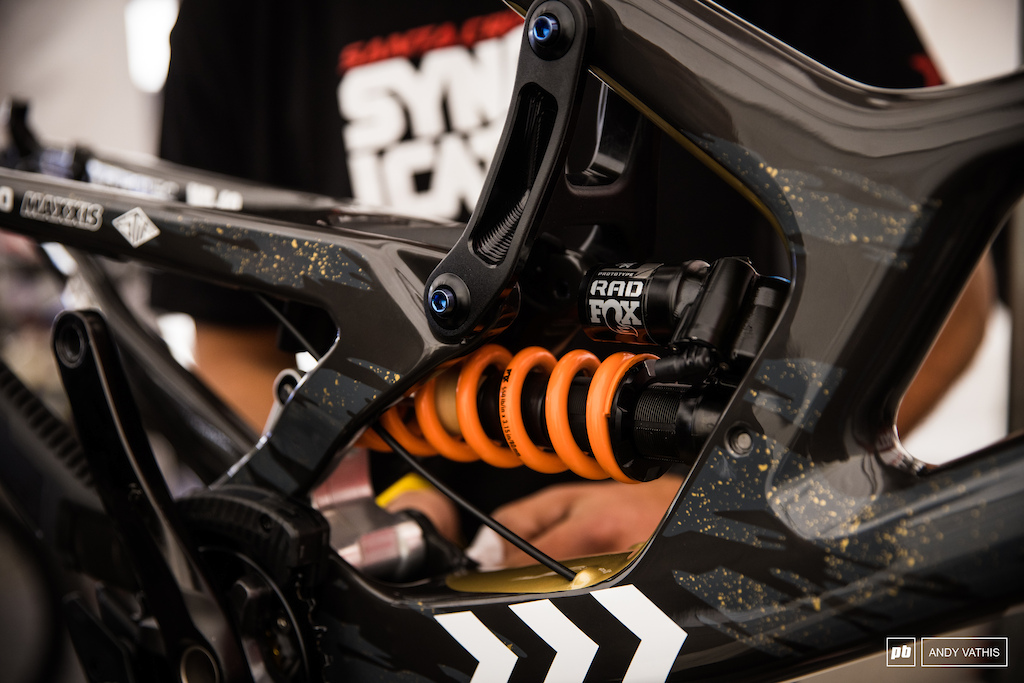 This shot of Greg Minnaar's bike in the pits before the race appears to show a similar cable port on his coil shock, but with no control box.
But look closer and you might spot the cable connecting the box to the shock attaches to the part of the shock that controls the low-speed rebound valving, opposite the red adjuster knob. So perhaps this device is to slow down the shock's rebound for the kicky jumps near the bottom of the track so Nicole doesn't need to compromise the suspension sensitivity on the fast and rough sections. Or perhaps it's to compensate for the inevitable build-up of rebound ferocity in an air shock as the air and oil heat up during a run.

It could be both, or possibly neither - I only have these photos to go on for now as Ross wasn't able to get any more information on the ground. Let us know what you think it could be in the comments. 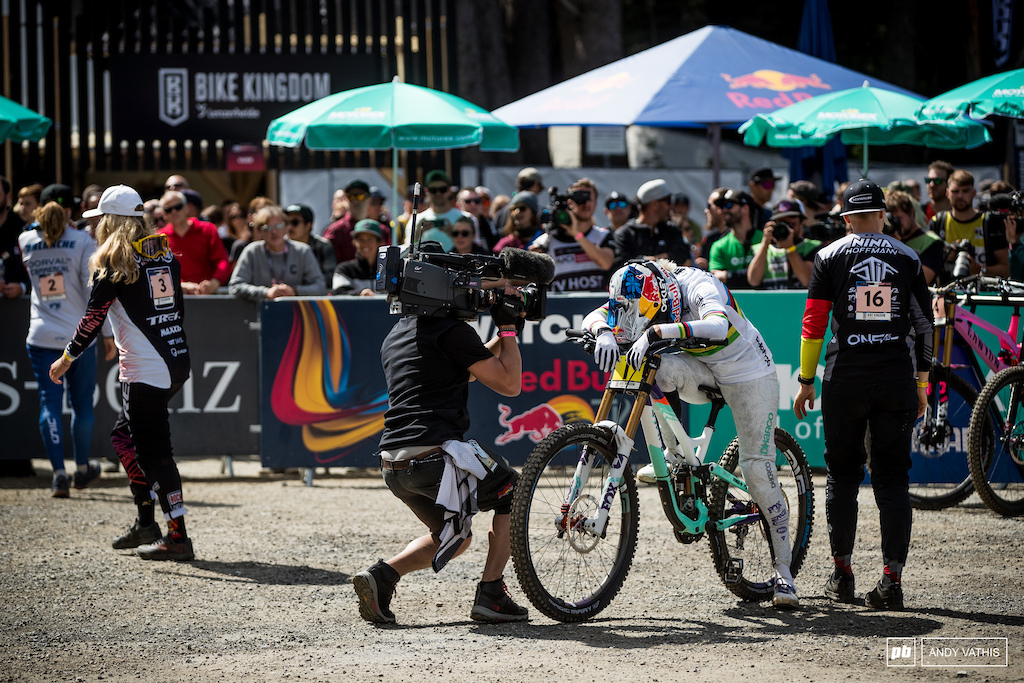 Look closely (right click and open the image in a new tab) and you can see the device was used on Nicole's bike in her race run.

MOBrules (Sep 6, 2021 at 21:16)
It's pretty obvious that the remote button uncorks the champagne on the podium.

FWIW I've seen a few people speculating that it's a lockout but I haven't seen anyone suggesting it's a rebound adjuster.

ndefeo96 (Sep 7, 2021 at 6:25)
Fox mentioned it in a Dialed episode a few days ago. Jordie said it was on Minnaar's and PomPom bikes then. Wouldn't say what it was for though,

VorsprungSuspension (Sep 7, 2021 at 18:56)
@seb-stott: take a look at the other side of an X2, the rebound adjuster isn't in the same place (on a stock shock anyway), it's on the other side of the compression adjusters. Where this sits is between the compression base valve and the reservoir, which (shape notwithstanding) does happen to be right where the lockout also goes on an X2; it doesn't look like it'd connect to the rebound flow path. Could be wrong since it's clearly got a third adjustment module in a custom reservoir bridge, and I hope it's more than just a lockout, but currently that appears most likely.

ozhuck2flat (Sep 6, 2021 at 21:51)
And the way the linkage has been shaved down for clearance, for the cable entering the shock.

ozhuck2flat (Sep 7, 2021 at 3:37)
Prototypes like this are easy to have a dig and a laugh at but I'm really glad when I see stuff like this on pinkbike.
It's not a spy-shot, review tomorrow deal: this looks like a genuine prototype. They may actually be experimenting here and it would be really cool to see a different take on live valve for enduro or DH with different goals to the previous of giving a good pedalling platform. I hope fox does actually talk about what they're doing to find what kind of electronic controlled bike stuff riders actually want.

If it works significantly better, then people will put up with having batteries and added complexity.

fodermonk (Sep 6, 2021 at 22:00)
Not exactly breaking news when the shocks being used on these two bikes were mentioned in a Fox YT video. Admission they were working on something new, but that's all Jordi could say about it.

mfoga (Sep 6, 2021 at 21:28)
Greg made mention of some new telemetry they were using in a syndicate video. I think Myriam also said something about it in a video. Plus in Fox video you can see Greg looking at his phone when talking to Jordy about the shock. Unless all that was elaborate smoke screen then it probably just that not line valve.

Zak-B (Sep 6, 2021 at 22:15)
Pretty sure he was talking to Jordie about the compression/rebound speed data from his Motion Instruments data logging system, he uses it in practice and it plots on their phone app.

Durtwrx (Sep 6, 2021 at 22:20)
So that rocker arm looks like maybe a hacksaw & file
We’re utilized for precise hand machining on a bench vise

The remote is to activate a pump so she doesn’t have to waste time & energy sucking.

cypher74 (Sep 7, 2021 at 12:43)
Or you could watch the Dialed episode where jordi says that Pom Pom and Greg are running some experimental shocks.
He declines to say what it is just that it’s something they want to try which may or may not be used in the future.
A little learning experiment

Meettaco (Sep 7, 2021 at 15:13)
What is the possibility of it also working like the Shockwiz as well? It probably is not - but it has electronics inside of it and it would not be off base to think some of that optimization could be built in. Then the shock can do automatic setting for you. Don't kill my thoughts lol.

ReubenSandwich (Sep 7, 2021 at 0:26)
Time to take out the recycling. Which is not actually part of it but also important.

CFR94 (Sep 7, 2021 at 4:32)
Tech like this will be nice once it can read your mind and firm up when you want it too. I've seen people playing basic video games with two pads hooked up to their temples, I don't see why the se thing couldn't be used to tell a shock to open or close a compression circuit

catweasel (Sep 7, 2021 at 11:03)
People lose their minds over wireless drivetrains, ebikes and twinlock and you want to start attaching stuff to their temples? The comments section would probably crash the internet!

Many of the riders have mix and match sets, from watching the racers YT channels etc a lot of them like the Saint callipers but the feel of the XT/XTR lever. I think Greg runs saints with XTR levers. Just personal preference for a lot of it. They’ve even mentioned mixing pad compounds (resin-metal) depending on the track.

Would it not have been a better idea to put the first sentence BEFORE the large picture directly above...? ‍♂️

KnowMtB (Sep 7, 2021 at 8:09)
It might be a telemetry system. Minaar was reading off rebound speeds to Jordi from an app on his phone.

Darwin66 (Sep 7, 2021 at 10:36)
Xt brakes are bloody fantastic. Every bit as good as XTR to me, not beneath anyone at all. XTR is a bit lighter, but xt is as good as anyone, including world cup riders, could ever need. I prefer the feel of the saints though.

thechunderdownunder (Sep 8, 2021 at 8:11)
Are you allowed to put weights on your bike to keep downward momentum?

englertracing (Sep 6, 2021 at 21:14)
First comment. Perhaps something that allows fast lsr for wheel movement but slow lsr for chassis movement.

RyanVars (Sep 7, 2021 at 1:14)
Anybody else feel that this kind of tech is dumbing down the sport? I'm not saying it is but I wonder where the line is between rider skill and AI skill boost? I think I'd rather see riders progressing and not the processer in some fancy black box.

e-fro (Sep 7, 2021 at 3:44)
People said the same thing about index shifting, suspension, and basically any other technical innovation that our sport has seen.

RyanVars (Sep 12, 2021 at 7:15)
@e-fro: I get that, however this seems different because, unlike index shifting, you now have a computer chip deciding what’s best instead of the rider. It’s the AI aspect that’s under question,

Mattysville (Sep 8, 2021 at 7:20)
Imagine never being fast enough to even qualify for a World Cup despite buying all the highest end components and carbon frames and then seeing the fastest in the world winning on “mid” level components and alloy frames.

mtbtrekracer (Sep 6, 2021 at 23:24)
and for the last time, rebound effects how the suspension decompresses after its been compressed - ie fast or slow, so if your rear suspension rebounds fast at the lip, guess what happens?
Proof? ask jordi, "rebound effects how fast the suspension recovers after being compressed"
Turn your fork rebound to full rabbit an tell me what happens, 100% it will pogo you.. exactly like the shock does.

betsie (Sep 7, 2021 at 2:04)
Well, you have that wrong.
Too fast a rebound will kick you, its pretty simple really.
Dh bike setup is about compromise, live valve is a way to try and blur the compromise line.

Thats why the pros go to 1 guy for advice on setup.

m1dg3t (Sep 7, 2021 at 4:31)
@mtbtrekracer: Who should we trust? Some rando plug replying in the PB comment section, or the suspension guru for WC Champions? I think I'll go with the my pillow guy...

zephxiii (Sep 8, 2021 at 4:20)
Yeah I've pulled off to the side before to slow down rebound cuz it was getting a lil too crazy on the jumps.

jaame (Sep 8, 2021 at 6:22)
@m1dg3t: yeah well Jordi has a vested interest in talking up the effects of suspension. I bet he would be singing a different tune if he went to work for Continental or Maxxis. Just make sure your tyres pressures are within 10% of each other front to back. I know it’s fashionable for the kids nowadays to run much higher rear pressures for schralping and that’s fine, as long as you also increase the front pressure to within 10%. For example, if you’re running 35psi at the back, the front should be 31.5 or more - this is how to avoid being bucked. If you’re running 31.25 rear and 19 front what do you expect?

Bikerdude137 (Sep 8, 2021 at 15:54)
@jaame: kids run low rear pressures to shralp and high pressure to roost (i know huge difference) other than that sounds all good

from a 14 year old who preffers roosts

mtbtrekracer (Sep 8, 2021 at 23:45)
@jaame: that is the dumbest thing ive heard, other than lack of skill its mostly rebound that will buck you. Jordi has helped many DH Pro's win clearly, he knows his stuff - its his job too.

mtbtrekracer (Sep 9, 2021 at 0:08)
@jaame: cool insult. but im right though. you clearly know nothing about bikes then

jaame (Sep 9, 2021 at 3:53)
@mtbtrekracer: I totes recommend you trying 35psi in your back tyre and 20 in the front, opening up your rebound to fully fast and hitting the jumps. Then try again with the tyre pressures within ten percent of each other and rebound closed off to fully slow and see what happens.

why would i do the tyre pressure and then full fast my rebound? that contradicts the lies your spitting out?

Mate clearly your off your chops? are you like the next doublecrown/badboyleroy?
wish we could post memes here, your def the one that the guy smokes meth before commenting

It will buck you less on the second lap guaranteed.
I also ride a bikepark with very steep lips (Silver Star) so the difference is even more notable.