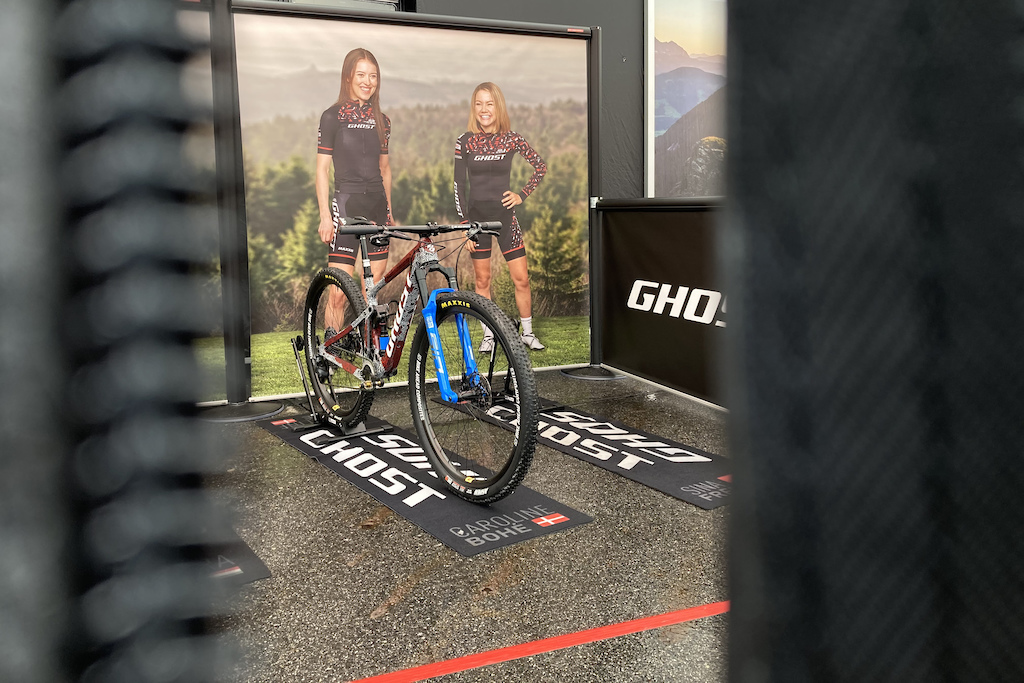 With the Olympics cancelled, this summer saw a deluge of new XC bikes being released with Specialized, Cannondale and even Transition getting in on the action. It seems like that trend might not be finished yet as today we've spotted a new Ghost full-suspension hidden in the pits at Nove Mesto. 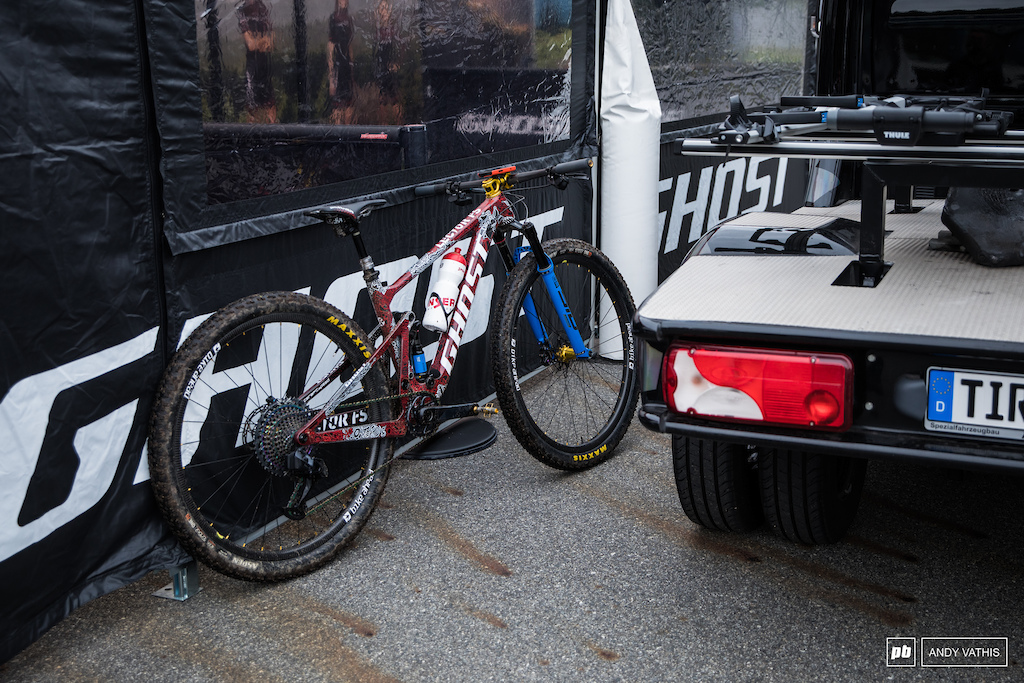 A Pinkbike forum member sent us this shot of the new bike from between the zips of the pit door, and we also saw it in action under Anne Terpstra in the Short Track race last night, which means it will also be raced in the XCO race on Thursday. 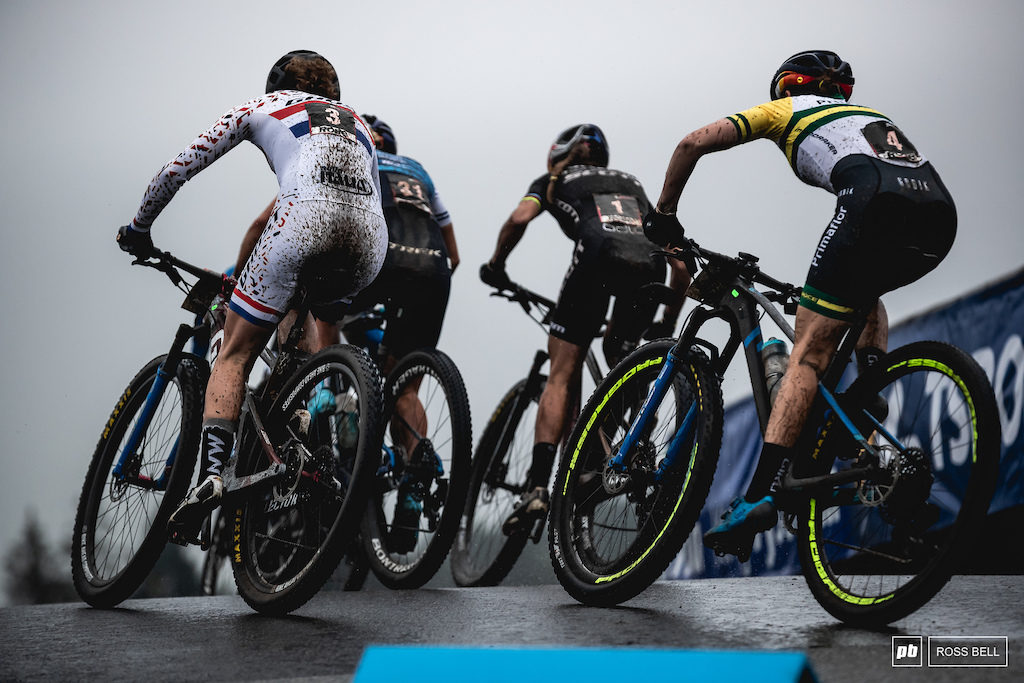 Anne Terpstra (left of shot) cranking the new bike on the tarmac of the short track race.
The Ghost Factory Racing Team spend most of their time in 2019 riding on the Lector hardtail that was released to the public last November. Even when most of the field was using full suspension, Terpstra, Frei and Benko stuck with the hardtail, including here in Nove Mesto and for Terpstra's win in Vallnord. When they did race on full suspension bikes, as Sina Frei did at Worlds last year, they did so on a modified version of the SL AMR, normally a trail bike with 130mm of travel and not ideal for XC World Cup racing. 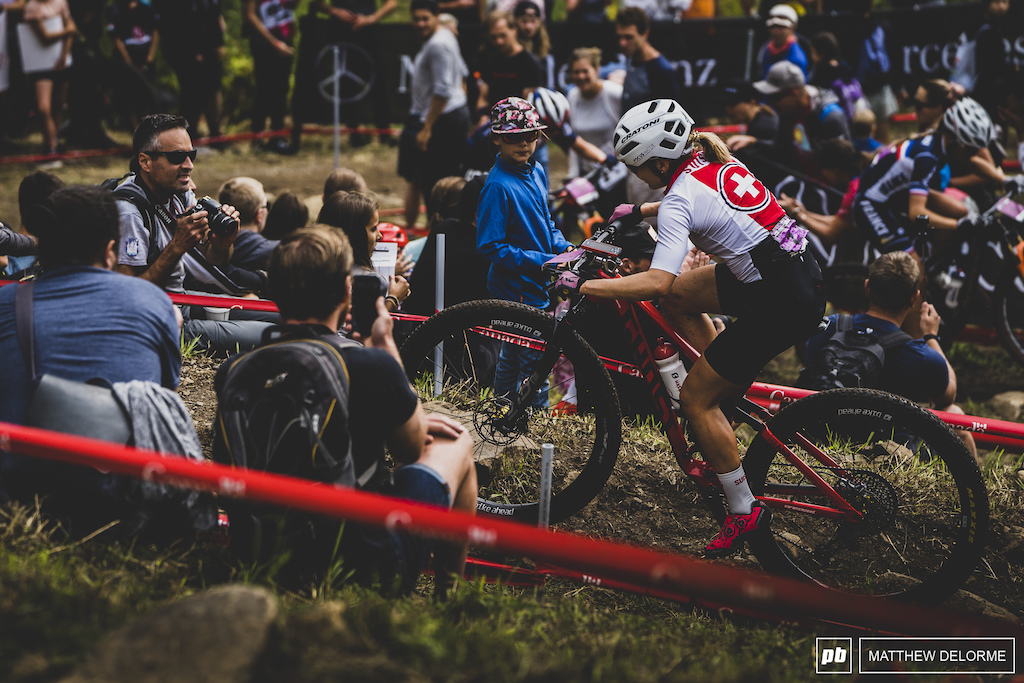 Now they have a new arrow in their quiver, though, which should help them compete on the more technical XC tracks the World Cup circuit has to offer. From what we can see, Ghost are moving away from their tried and true Horst link system to deliver the rear squish on this bike; instead, it looks to us like a short link system with an obvious upper link and then a second link that connects the swingarm to the front triangle that runs above the chainring. 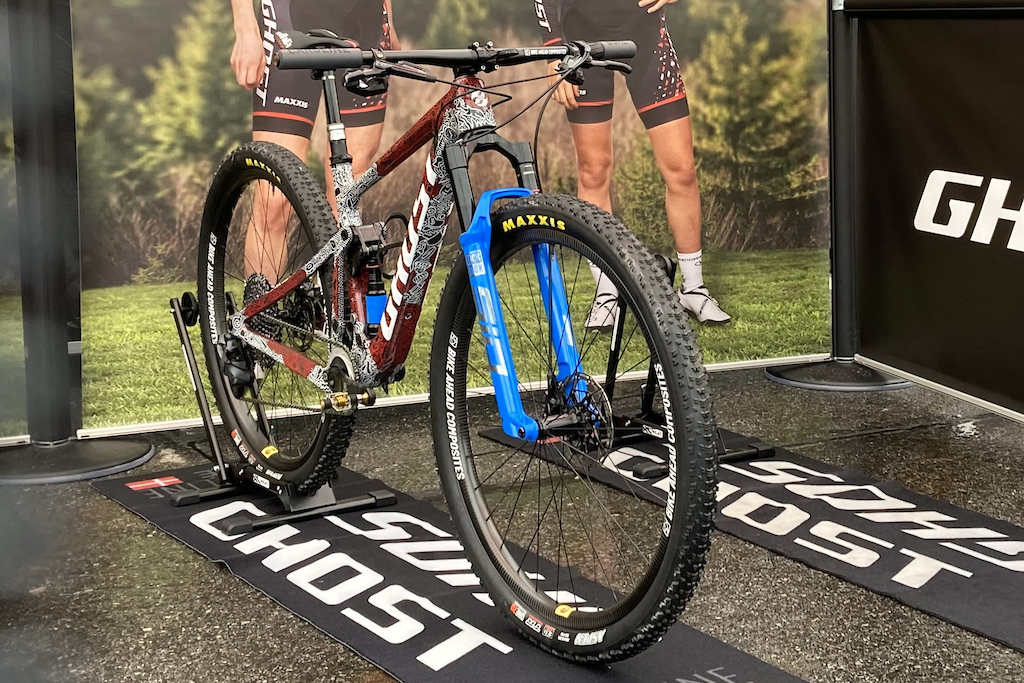 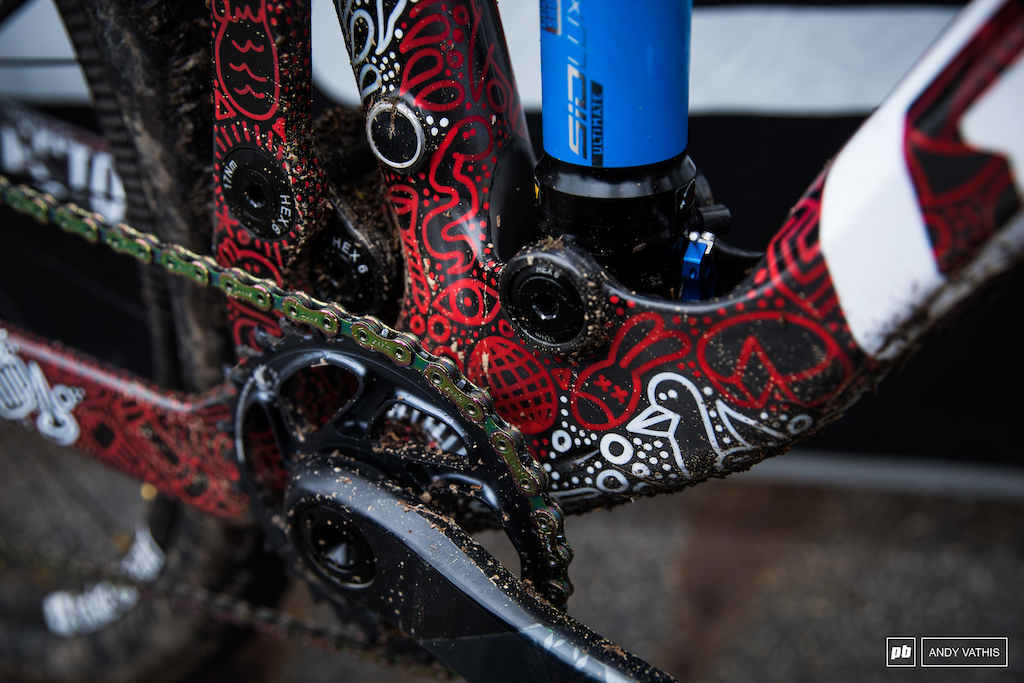 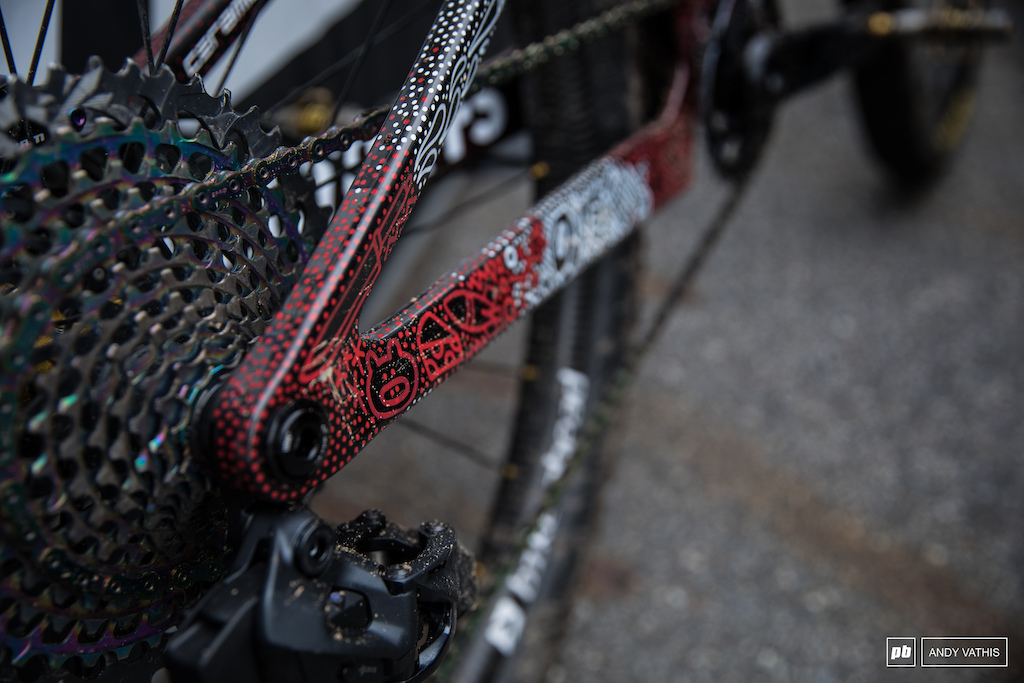 The rest of the bike looks to be kitted out in super-light componentry and we have no doubt the frame will be a featherweight too. There's no word yet on whether the bike will be made in Belgium's Rein4ced factory, as its Lector hardtail currently is but hopefully we'll get some more details on that and the rest of the frame soon.

dldewar (Sep 30, 2020 at 10:42)
If I have made the first comment - it surely indicates the overall Pinkbike communities excitement about a new short travel Horst link bike. Available at MEC, or not?

iammarkstewart (Sep 30, 2020 at 11:18)
Completely guessing but with MEC filing for bankruptcy and it no longer being a co-op under the new ownership I'd say no. If you've been in the downtown store in Calgary it's horrendous stock-wise and with only mediocre deals.

philalm (Sep 30, 2020 at 12:44)
@iammarkstewart: To be fair to MEC, as far as I know every bike store in Canada is pretty much scrambling for stock. I don't expect their problems are helping though.

magnusc (Sep 30, 2020 at 13:25)
@jaakkoyk: Isn’t this TwinLink/VPP like BMC is using? Check the images postet in the link further down in the comments. mtbs.cz/kategorie/mtbs-foto-redakcni-technika/fotka/258446

swenzowski (Sep 30, 2020 at 13:58)
MEC dropped ghost a while back. Cannondale and Intense are the only MTB they carry now, well, they would if they didn't fire half their staff accross the country and then get bought out by americans.

dldewar (Sep 30, 2020 at 14:54)
@swenzowski: Wow - I never even noticed. I never really can say that I specifically have looked for Ghosts recently in the few rare times I have been to MEC. I know someone that has a single digit member number. They were NOT pleased with the direction of MEC in the last decade.

iammarkstewart (Sep 30, 2020 at 15:10)
@dldewar: I've been a member for a long time and it seems it's been downhill over the past couple years (only going by seat of the pants feel in the store).

I got one of the last few Ghost Roket 5.7+ bikes they had. Solid 1x11 SLX build, I quite like it. I'd look at another Ghost if there was a new Canadian distributor when the time comes.

ridestuff (Oct 1, 2020 at 13:49)
MEC's first big mistake, entering bicycle retail! They've sold every brand under the sun at this point now I think...

iammarkstewart (Sep 30, 2020 at 11:20)
I'll call your Black SID with a White SID w/blue decal that matches the shock. Or maroon-y colour-matched decal.

Jango997 (Sep 30, 2020 at 12:34)
For anyone curios, here are some more photos of the bike Terpstra has been riding earlier this season in all black.
mtbs.cz/kategorie/mtbs-foto-redakcni-technika/fotka/258441#.X3TdVmgzaUk

melanthius (Sep 30, 2020 at 13:57)
Thanks for the link! From my quick-and dirty analysis of the suspension, at 0% compression the frame maxes out at 50% anti-squat. I haven't put it through Linkage, but the layout of the short links is pretty unique. The clockwise-rotating upper link that starts past vertical combined with a lower link that is also close to vertical means that the instant center is going to be moving wildly relative to the chainline. I'm really interested to see what they say the design concept is.

melanthius (Sep 30, 2020 at 14:58)
Yep, did the analys and anti-squat goes from 50% at top out to 125% at sag to 220% at bottom out. I think this means that while pedaling the suspension will squat if it's near top out, and extend if it's under heavy compression. If so that means when you're on the gas it should tend to pull towards the sag point. Would this stabilize the geometry?

It's certainly different from any other AS curve I've seen.

mhon44 (Sep 30, 2020 at 21:59)
Ghost have already released a new catalogue, there is a whole new platform Riot for enduro and trail bikes

Side view of Lector FS

nattyd (Sep 30, 2020 at 14:36)
Seems like the XC world has mostly collapsed to Spark clones and Epic clones. Can't complain, they're good designs! At least there are a few options that aren't single-pivot flex-stay.

GaelP (Sep 30, 2020 at 23:40)
I was already interested by this new Ghost XC bike.
It has been seen in Italy recently:
www.mtbcult.it/tecnica/ghost-lector-fs-anteprima-2021
www.bike-angebot.de/ghost-lector-fs-advanced-cherry-red-2021.html

nicktapias (Sep 30, 2020 at 11:39)
How does Rein4ced compare to Guerrilla Gravity’s Revved Carbon Technology?

PHeller (Sep 30, 2020 at 13:22)
Very similar processes. Robotic layup of thermoplastic carbon fiber. From what I can tell, Rein4ced is licensing its manufacturing tech to other companies, or acting like a frame manufacturer for various brands, where as at this point at least Revved is only used for the production of GG frames. CSS Composites of Gunnison, UT is producing Revel's thermoplastic rims under the tech "Fusion Fiber".

I think some of the difference is that GG has implemented a kind of low cost, "thermoplastic carbon layup on a budget" that has allowed them to offer products that the average consumer can actually afford without huge overheads and massive debt requiring huge profit margins.

For example, GG's front triangle ($2200 - $450 seatstays - $400 chainstays (est) = $1200ish) only cost a little bit more than Revel's rims as a pair ($1400) and as of yet, Rein4ced doesn't appear to be making a production run Ghost frame. They've teased that the Ghost Lector was going to be made in Belgium, but when browsing Ghost's website, there is no mention of its origin.

To my knowledge, the only production bike that you can actually buy made by Rein4ced is the Kellys Theos, which starts $5850. Now, that seems like a decently affordable price for an full suspension, relatively high-tech E-Enduro bike, but it remains to be seen what the prices of Rein4ced frames will end up being.