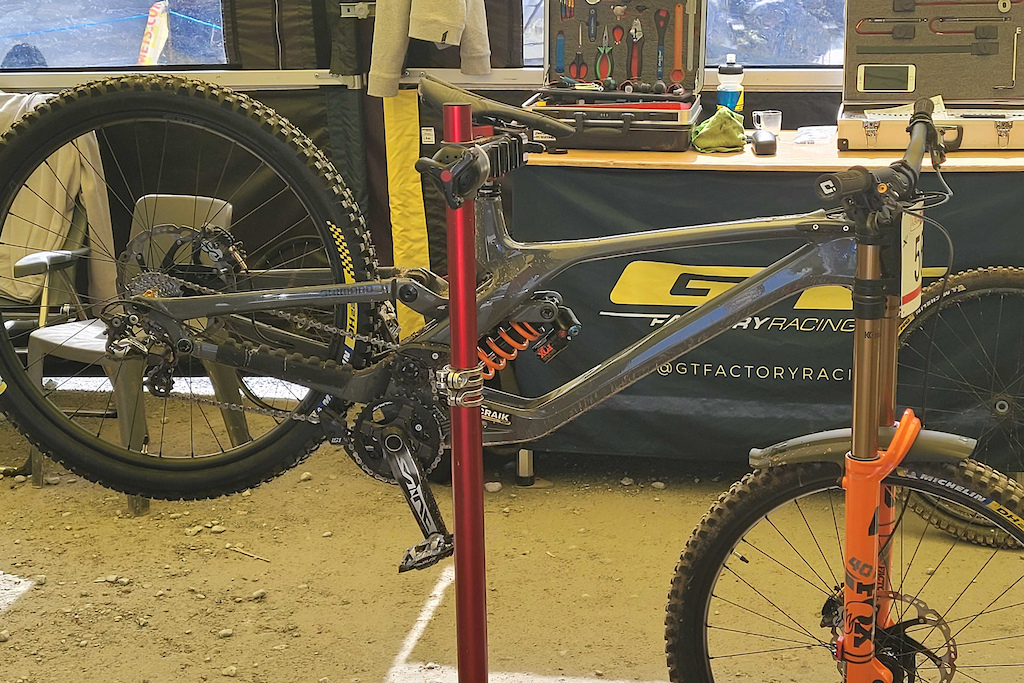 With a stacked lineup of World Cup teams and racers at this weekend's British National DH race at Fort William, it is no surprise that there are some fresh bits of tech being tested out on the rough and rowdy course. One thing we have spotted so far is a new DH bike being ridden by the GT Factory Team.

The bike looks to have a very different frame to the previous GT Fury with a potentially lower pivot and redesigned idler. One of the most obvious changes from the GT Fury we saw the team on at the last World Cup is that the rocker link now goes through the frame with the lower shock mount being slightly further back. The frame still appears to be using the Horst-Link driven four-bar linkage but the overall appearance of the frame is quite different to past bikes. 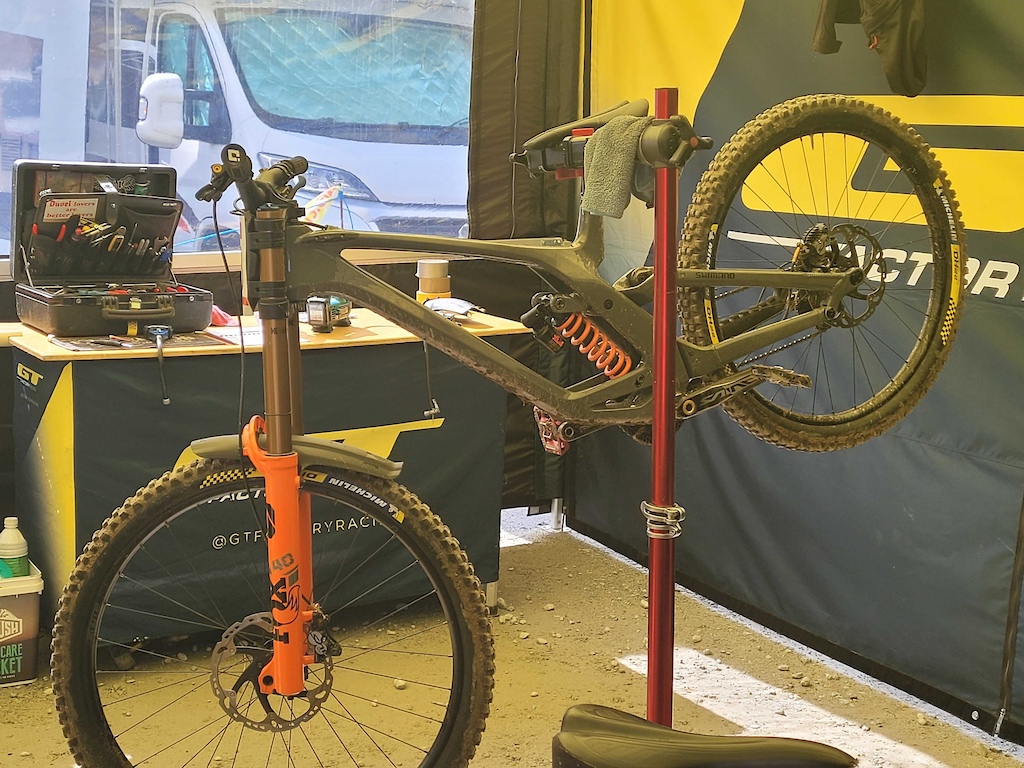 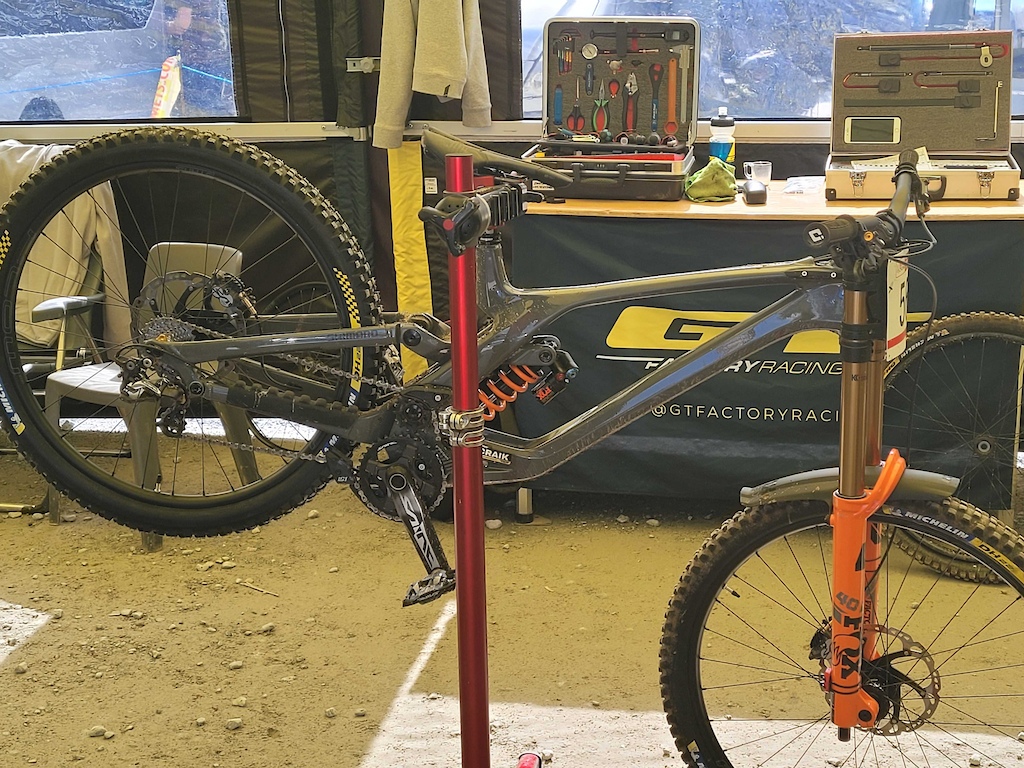 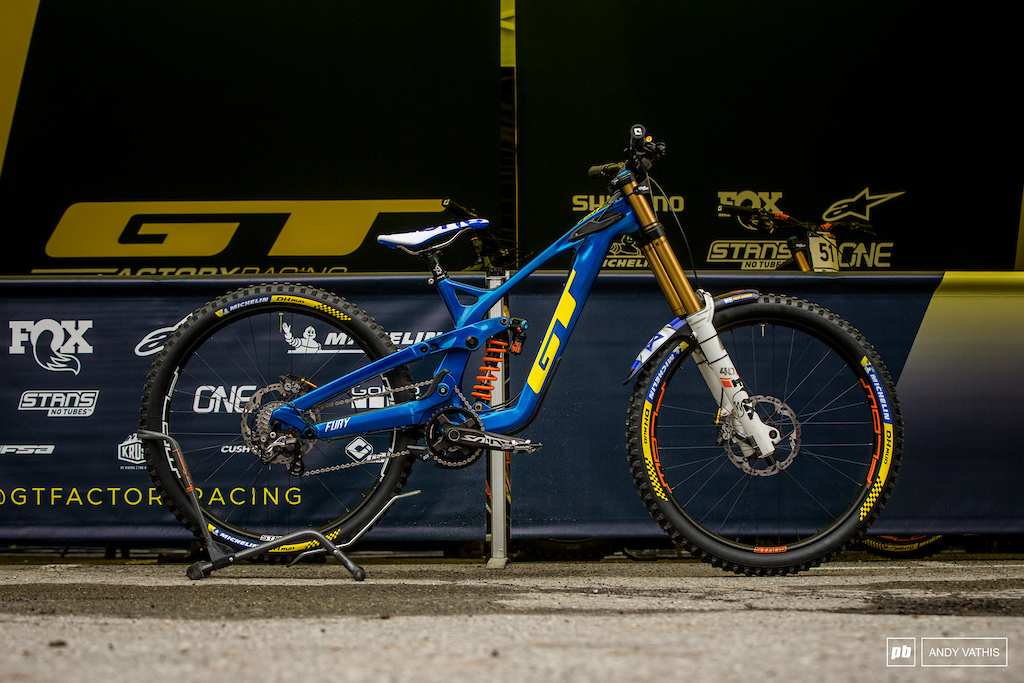 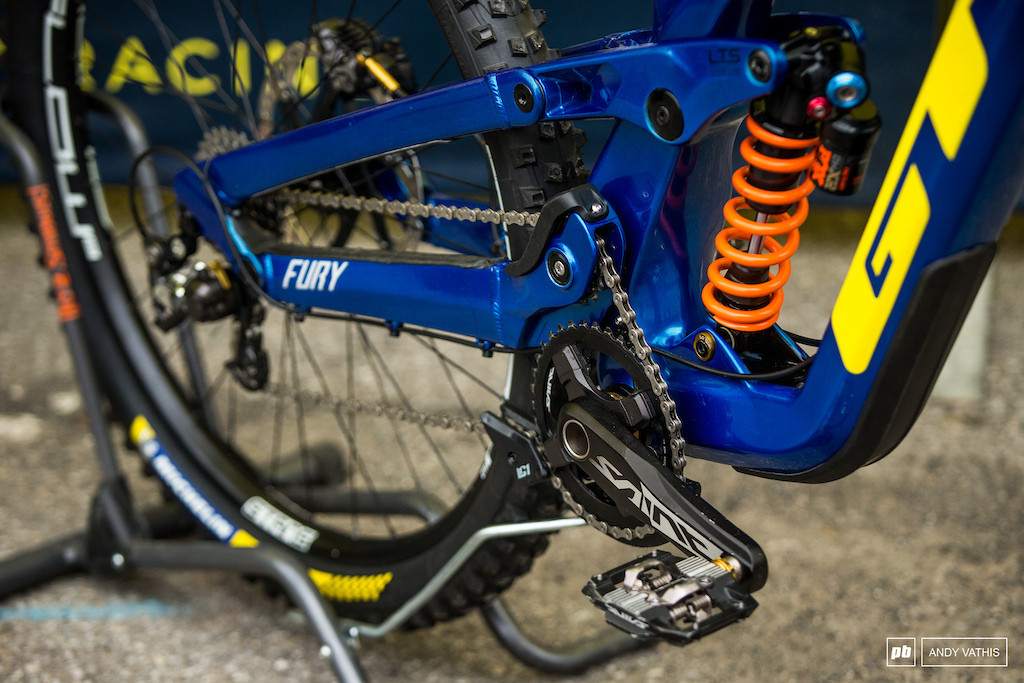 The current GT Fury
One other small point we have noticed is a completely different cable routing setup with cables now going into a port that is placed on the top of the top tube, this should make things easier when you are running a number board.

We've reached out to GT for more information about the bike and will update this piece if they comment.

SterlingArcher (May 8, 2022 at 16:08)
One might argue this bicycle possesses a close resemblance to one trek session

Jakegk2006 (May 8, 2022 at 23:39)
they tried to keep there linkage outside but they just couldnt resist and had to stick it within the frame

Compositepro (May 9, 2022 at 2:01)
i wonder if you took a blind man and made him feel his way round these bikes having never seen a session he would say ........you could even let him listen to unchained melody whilst he fondles

blowmyfuse (May 9, 2022 at 5:40)
You're not kidding. Just looked and there are some insane cropped sentences. WTF?

Cons:
Expensive for base model
Not good in switchbacks
idler is draggy and noisy

veryfastbiker69 (May 10, 2022 at 13:53)
@melonhead1145: Why does everyone say that about idlers? I ride the Norco shore and I have never noticed the "noisy idler," It might create some drag but its nothing significant.

melonhead1145 (May 11, 2022 at 1:34)
@veryfastbiker69: I don't think everyone does, it just seems every review PB does of a bike with an idler they list it as a con, being noisy, draggy or needing more maintenance

Danzzz88 (May 8, 2022 at 13:49)
It's a good looking bike but not sure if I still prefer the looks of the old one...maybe it's just the paint job. I have a Yeti and yet I've always wanted a GT too...there is just something about them...maybe the way they have always looked, something cool about them, but I never considered buying one since the Idrive days as I never thought they were up there performance wise compared to some other brands...but maybe I'm wrong who knows....

(It's a fully rigid single speed).

ob7779 (May 8, 2022 at 14:59)
Yea I just bought a Fury with an idler and honestly its a tank, it'll plow through anything, maybe a bit on the heavier side so not too playful but it is really easy to pop off jumps and get height. It also has to be the quietest bike ive ever heard, no rattling whatsoever

Crankhed (May 9, 2022 at 9:37)
I wish I had a dollar for every frame GT called a PT Wonder how long it’ll be b4 Brage Vestavik is on one of these and shreadin balls like a madman again? Haven’t seen much of em since Rampage accident unfortunately (makes sense after a hard dig like that) although I did see something about a new vid the other day. The guys an absolute animal, kinda miss seeing him bending the laws of MTB physics. They should give one to Brage to test we all know he’ll put it through the wringer
#letVestavikhavealick

SterlingArcher (May 8, 2022 at 13:35)
Really smart design to house everything internally. Can mount the shock anywhere

HundredPerCent (May 8, 2022 at 23:32)
I Like the Look Look! The previous model was also super Nice but they are Not Made for tall Riders

If they Had a Optionen for tall Riders i would ride a GT now.

tajtigabor (May 9, 2022 at 3:13)
Have to admit, this is a very aesthetic and balanced looking DH bike! Simple, but not boring. Thumbs up!

NorthEasternDownhiller (May 9, 2022 at 18:51)
Looks like a bike that also has tubes and wheels. So unoriginal.

nmcmillan (May 8, 2022 at 19:34)
I literally thought they couldn’t make a good looking bike, guess they haven’t picked colors yet though so there is still hope for maximum ugliness.

constantly-broken (May 8, 2022 at 18:15)
Looks like the current Fury just with a split seat tube that wraps around the main upper pivot, which also looks to be "borrowed" from the new Intense prototype.

tonybollock (May 9, 2022 at 0:24)
Where the rocker meets the swingarm it could be one pivot rather than two side by side.