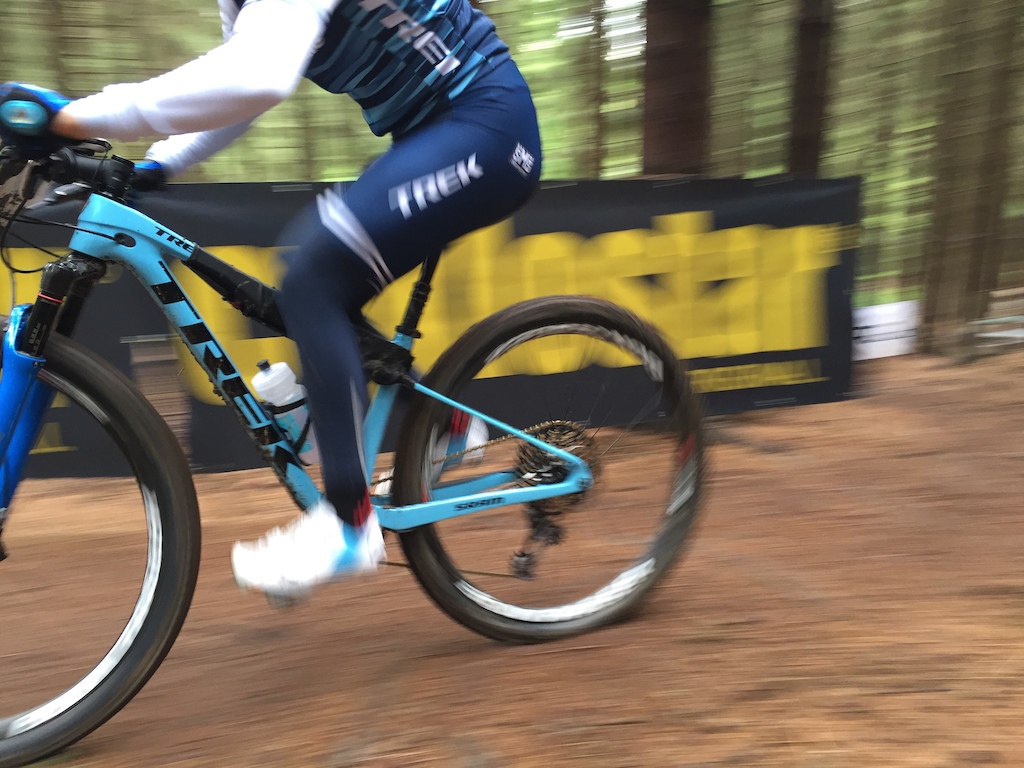 There wasn't too much exciting tech at last weekend's World Cup in Albstadt but Nove Mesto seems to be off to a strong start with this spy shot we just received.

This bike is ridden by Jolanda Neff and our observer said that there are other team riders on it as well but Trek currently seem to be keeping any details under a tight wrap (literally). It's hard to tell much at all from the photo but it's clear that this is a full-suspension bike and that there's a lot going on in the upper part of the front triangle, although there could also be data equipment packaged in there as well. One way or another, this looks as if it would be a fairly large deviation from any other bikes in Trek's full-suspension line that we've seen. It also appears that there is a pivot at the rear axle but it's hard to tell exactly what's going on with the blurriness there. Also on the bike are Bontrager's new 1290g Kovee Triple X wheels, released earlier this week.

We have our photographers on the hunt for better images which will surely surface and we will provide an update when we get them. There has also been a social media tease from the team on Instagram that shows the rear third of what seems to be the same bike:

It’s raining outside, but plenty to do in the tent. Race prep in full effect. 📷 @mdelormephoto @rossbellphoto

theredbike (May 23, 2019 at 8:47)
@DoctorWatson: Looks like her IsoSpeed decoupler broke and she had to tape it together.

endurocat (May 23, 2019 at 6:10)
So, this is the only , out of focus ,photo, you guys came up?
Just come clean and tell the readers about the media embargo so they can understand why you can't show the bike.
#fakenews

I am noticing a trend here. How many more integrated/hidden rear shock bikes will be released in the next 6-12 months? Should be get a pool going here? What are the odds in Vegas right now?

Texicans (May 24, 2019 at 7:39)
@salespunk: What's the benefit to more integrated/hidden rear shocks? Does it extend the service interval and reduce the cost of ownership? Or does it reduce the amount of home wrenching you can do and increase service tickets for the LBS?

salespunk (May 28, 2019 at 7:39)
@Texicans: Personally I don't see a benefit. Only thing I could see is protecting the shock in very sloppy conditions

padkinson (May 23, 2019 at 5:16)
This won't be a Top Fuel replacement (that's coming soon too). It'll more likely be a slightly squishier softail-esque Procaliber type bike. Supercaliber?

Muckal (May 23, 2019 at 5:34)
I'd love a trail softtail with about 30mm of travel to make up for bad line choice and take away those short harsh hits that really get you tired when riding the HT.

pinkrobe (May 23, 2019 at 6:27)
The embargo comes off the new Top Fuel today. It's a good candidate for some downcountry - over-fork it, get some bigger tires.

padkinson (May 23, 2019 at 7:35)
@pinkrobe: Guessing that they're doing away with the full floater? Lighten it up a tad and bring it into line with the rest of the updated bikes. Hoping for no Re:aktiv, that'd save me the bother of having it revalved.

salespunk (May 23, 2019 at 11:55)
There is a pivot at the BB in the IG photos above so definitely not a soft tail. Looks to be a good old single pivot bike most likely with some new RS live valve type rear shock.

wingguy (May 23, 2019 at 8:35)
@bridgermurray: It;s def a full suss, you can see from the shape of the chainstays there's a main pivot near the BB. But it is also clear from the trek insta photo that it's flex stay and there's no rear axle pivot.

wingguy (May 23, 2019 at 9:29)
@bridgermurray: Except if you actually look at the photo you can clearly see the chainstay shape is leading to a main pivot, so not a softtail.

Plus, there's the other leaked photo upthread in the comments where you can actually see the main pivot and the top of the shock

I keep coming back.

WAKIdesigns (May 23, 2019 at 6:00)
Some rider please, cover your shock and linkage, make a few wires stick from underside and see the comment boards go wiiiild!

DoctorWatson (May 23, 2019 at 16:39)
@SectionThirtyOne: Yep. I have the pictures since a week with the specs and the information about the TopFuel i got before christmas. I wait until the lighter Trek is coming.......20lbs full suspension.....

zyoungson (May 23, 2019 at 6:42)
Remember back when people would put a sleeve over their shock (lizardskins?) to protect it, only to find it would catch grime and dirt and completely ruin the shock.

lovetheride990 (May 23, 2019 at 6:22)
So no pivot on the rear axle as they go the route of spesh and others. Interestingly Trek is busy with a big dealer and media event at my local trails , so i assume they are doing a global launch today

TheBearDen (May 23, 2019 at 8:36)
next couple months Trek will be rolling out all their new bikes so stay tuned. The new top fuel is fucking dope as well.

warmerdamj (May 23, 2019 at 9:41)
How much did trek pay to get a blurry picture and no information on their new bike posted? Probably nothing.

clink83 (May 23, 2019 at 20:49)
Besides having a killer women's team do they really have a presence in XC?
Below threshold threads are hidden

youknowitsus (May 23, 2019 at 15:45)
check the newer pb article it's the same fuckin bike they just posted you idiots