Spotted: Orbea Riders Are on a New Rallon Frame at the Loudenville EWS

The Orbea Fox Enduro team has turned up to the Loudenville EWS with what looks to be a new Rallon enduro frame.

So far we've seen that Damien Oton, Laura Charles and Vid Persak are all riding the bike that is splattered in black and white camo. The paint is designed to obscure the design of a frame but, more often than not, draws attention to it.

The current generation Rallon frame was released in June 2017 and then updated in 2019 with the Rally On Linkage that added 10mm of travel as well as increased progression and sensitivity. Two years on from that, it seems Orbea has decided to update the bike again, although from the photos we have it looks more like a case of evolving the current design as opposed to a complete overhaul. 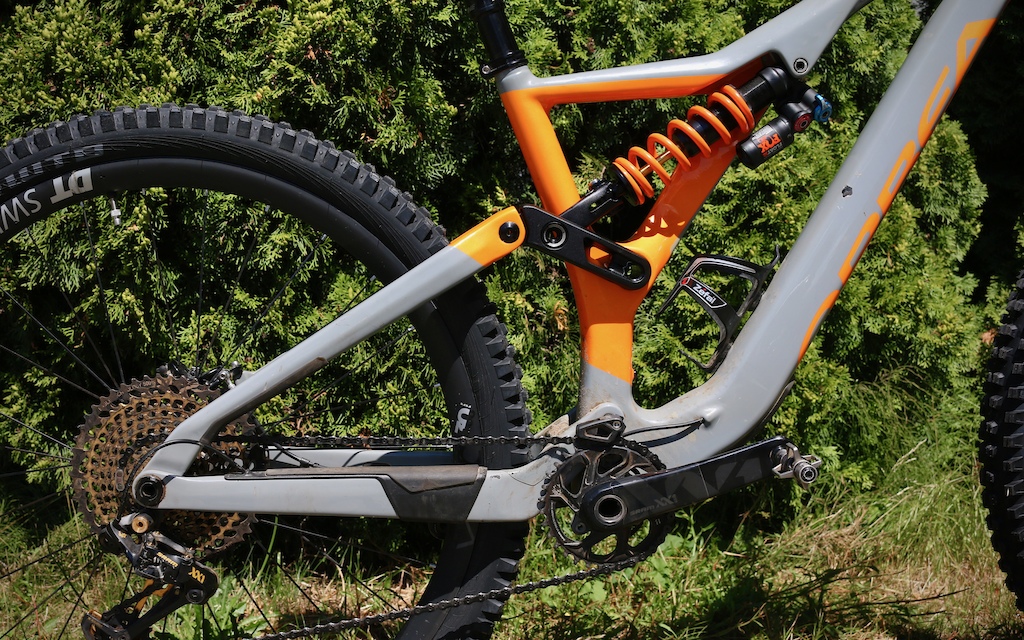 The current frame rear end with a Rally On linkage fitted. 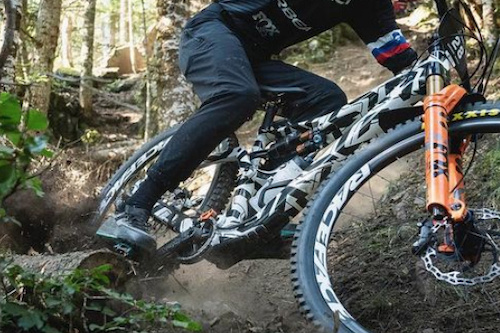 The part of the linkage that is now wrapped in camo used to have a hole hollowed into it but is now one solid piece. This isn't a huge change in itself but does hint at further kinematic tweaks. Photo: Instagram (Kike Abelleira)
It looks like the asymmetric design of the frame remains, but we suspect there have been some changes made to the linkage as the link that connects the seat stay to the seat tube now appears to be solid where previously it had a hole in it. On the front triangle, it looks like there might have been some changes made to the headtube area as well but it's hard to tell based on the cleverly composed social media shots. A GMBN Tech Instagram post also reveals that there’s storage in the downtube and a neat tool that’s integrated into one of the links.

We've reached out to Orbea for more info and have our photographers on the ground attempting to get some clearer, side-on shots of the bike. We'll update this article as new information becomes available.

jstndnls (Sep 1, 2021 at 20:05)
They should just do what every other company does and run a stock colorway on the new bike... Ratboy and the rest of the Cannondale waves crew have been riding the new habit for months and no one has even noticed.

withdignityifnotalacrity (Sep 1, 2021 at 16:56)
I know the current Rallon geo is considered dated, but for me it's bang on. I wish there were more Orbea distributors in the US, I'd be very tempted.

shredddr (Sep 1, 2021 at 17:17)
my buddy has one and has really liked it. why do you need/want better distribution? or do you just want a dealer nearby? he did the rally on linkage upgrade on his own with no problems - just ordered the parts from a dealer online... Orbea seems pro, though he hasn't had issues or reason to contact their support.

ratedgg13 (Sep 1, 2021 at 17:29)
I just added the rally-on linkage to my 2018 - huge props to Orbea for making the upgrade available to everyone to upgrade oldef models. I continue to test other similar bikes, and find even more "modern" ones lacking, other than reach (I'm 5'10 riding the XL to compensate). The fact that the WAO Arrival Geo and kinematics are SO CLOSE says a lot I think.

withdignityifnotalacrity (Sep 1, 2021 at 19:13)
@shredddr: All things being equal, I like getting a bike from a local shop, though my current trail rig is a YT Jeffsy. Not a big deal at the end of the day, but they're just not common bikes in North America in general. Which also makes minty used examples a bit harder to find

lifeofloon (Sep 2, 2021 at 3:45)
Oh they're here all right they just don't care about us. I've had to warranty my old Rallon twice due to cracked chainstay welds and each warranty process has taken months to be resolved and their customer service is non existent. It sucks because otherwise like you said they are great riding bikes.

Vlad-Putin (Sep 1, 2021 at 16:53)
You’re telling me the rocker link is now solid? Or possibly just wrapped? Not exactly earth shattering.

Grantma (Sep 1, 2021 at 17:50)
It looks similar enough to the old model that if they just didn't use the Zebra paint I doubt anyone would catch on that fast

solomtb1 (Sep 2, 2021 at 0:12)
It seems that the linkage is pretty much the same, just wrapped, but the front triangle is different, if you look and gmbn's instagram you will see new mount points for the linkage on non drive side, also seat tube angle seems to be steeper, that's the only selling point for me as my current Rallon STA is slack as... Just built a new Rallon frame in June lol

pball19ac (Sep 1, 2021 at 17:40)
I really like the ride of my Rallon. It's fast, playful and corners awesome. Do everything bike that doesn't feel like a downhill beast. Next to no pedal strikes and a nice long wheel base. I do wish it had some of the more refined features though that you'd find on a specialized. The internal cable routing isn't great, the linkage design works well but servicing it is not as easy as it should be. Their model of purchase is pretty cool though. I was able to get the component spec I wanted for a lot less than a similar specialized.

nematon785 (Sep 1, 2021 at 23:56)
Fancy pants but junk wheels. chinese bearings. All good cause schweet spanish bang bang. I'd buy another just cause learning salsa is fun...wait. Thats another hemisphere. Checking out now.
Post a Comment