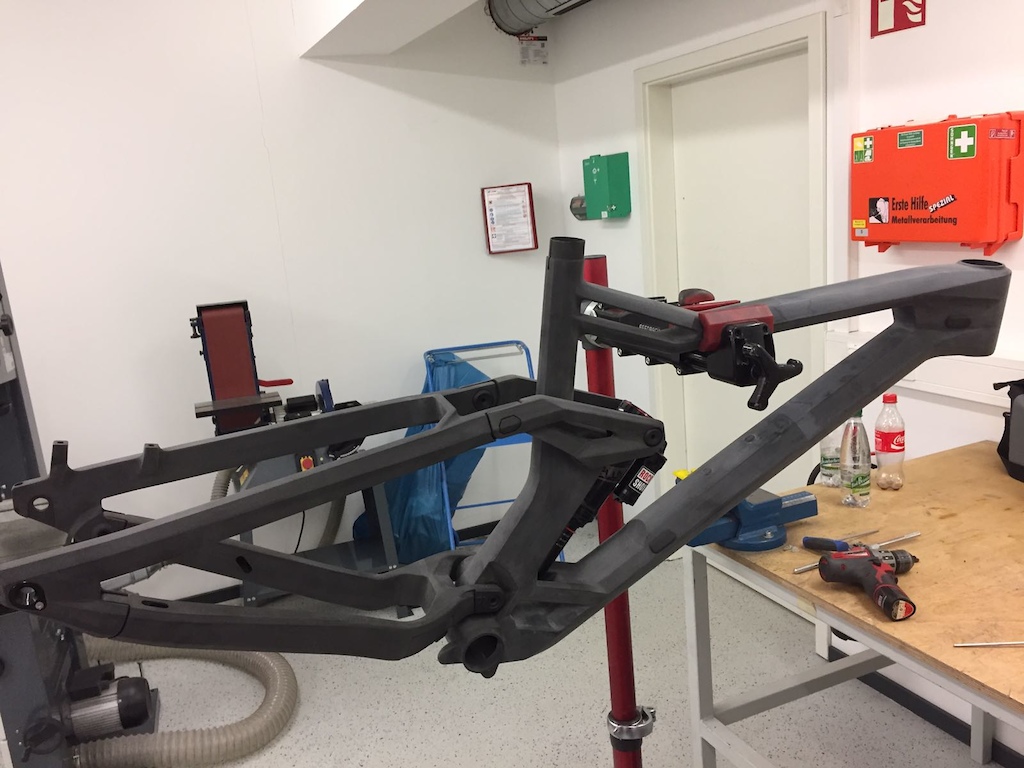 It looks like Radon are working on an updated version of their carbon Slide 160 - a few photos of the new frame shape were recently sent our way. Like its predecessor, the bike still uses a Horst Link suspension design, but the chainstay and seatstay pivots have been designed so that they appear flush with the frame, a look that brings to mind the appearance of the current Rocky Mountain Slayer. The top tube shape has also been altered - the way that the tube splits before joining the seat tube gives it a very unique look.

The Slide's rear shock is now affixed to the swingarm with a trunnion mount, usually a clear indicator that a metric sized damper is being used. There are rumored to be versions in the works for both 27.5" and 29" wheels, although final details have yet to be announced. 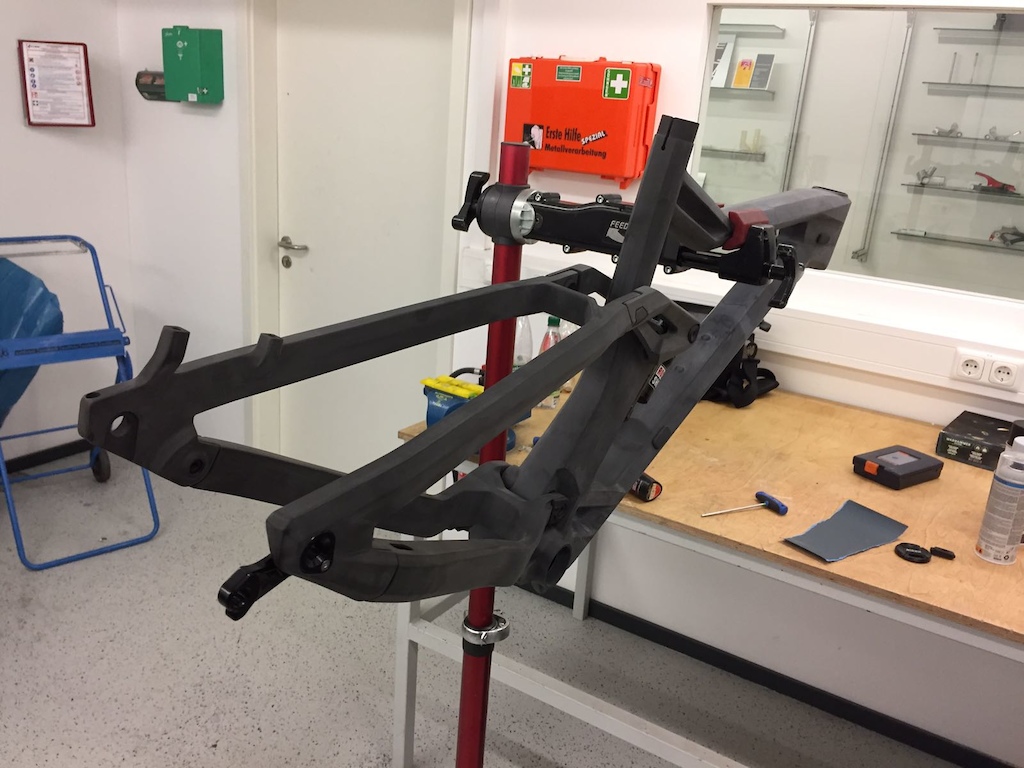 The frame has a very angular shape, a change from the curves found on the current version. 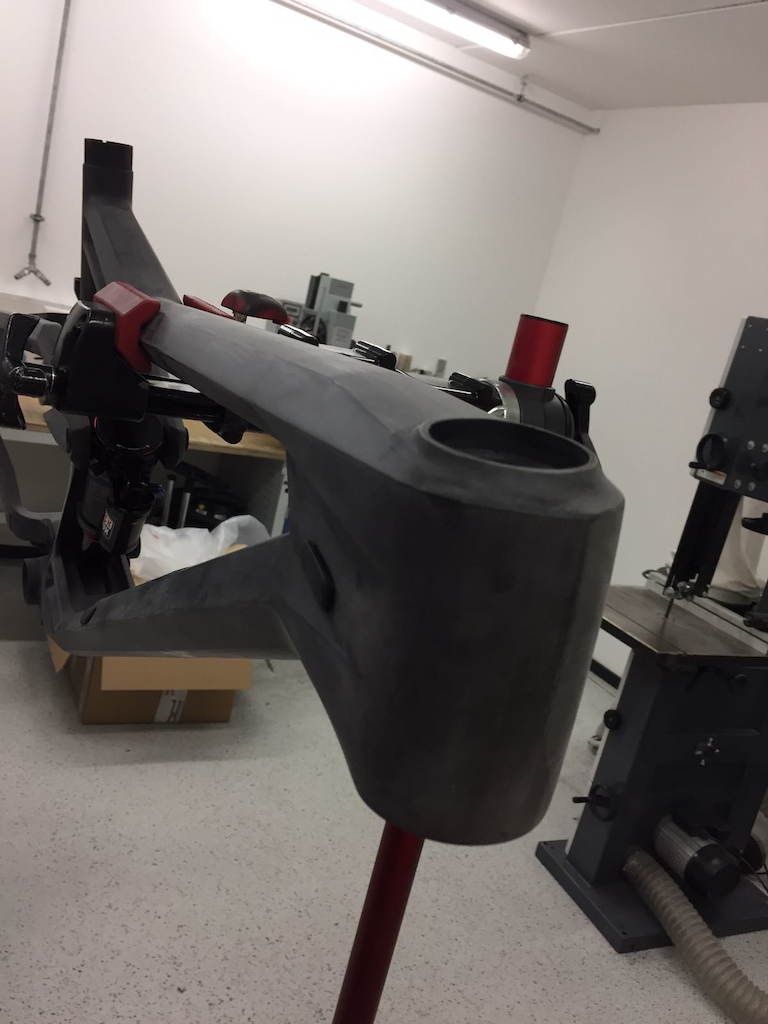 It's not entirely clear whether this is an unpainted carbon frame or a non-rideable rapid prototype, but there's something about the raw finish that makes the bike look extra stealthy.

Is it going to be available in North America is the real question ???

, pretty sure there was a fighter with a similar theme as well wasn't there?

therealtylerdurden (Feb 10, 2017 at 1:54)
I feel like even putting round wheels on it would be sacrilegious..

Timo82 (Feb 10, 2017 at 18:35)
@therealtylerdurden: hahaha that's EXACTLY what I told myself yesterday! But I think an industry 9 wheelset would still be nice! All blue or black with silver hubs! MMmmmm!!

And also not a single one of they re 2017 modells is painted like that!

bigtim (Feb 10, 2017 at 5:21)
@Powderface: How about that time that one of them crashed in the desert but they lost the nuclear warheads and one detonated in a mine underground but the other was later found after a train crash where it was meant to be detonated by terrorists? I've DEFINITELY seen a 108 minute documentary about it....

sd351 (Feb 10, 2017 at 6:13)
@bigtim: I thought it was only one warhead, and the terrorists divided it in 2 parts to give the detonations a nuclear signature. I recall the documentary, and I believe a British secret agent and an uncharacteristically beautiful nuclear physicist joined forces to uncover the scheme.

MTBrent (Feb 10, 2017 at 4:52)
These are actually spy photos of @mikekazimer 's computer screen shot through the office window...

twozerosix (Feb 9, 2017 at 14:01)
Somebody get this frame designer some sandpaper to round out these hard edges. The frame has a good 'stance' but is too brutal in execution, bordering on crude. Carbon fiber doesn't like hard angular edges. Neither do the finishers of carbon fiber bikes. Someone has to push the fabric into the edges of the mold, and then take pains to not sand off the edges when finishing the surface. Those double-tubes at the TT/ST junction and again at the ST/BB area seem like gratuitous mud catchers, unless there's some secret SWAT gear to stash. Splitting the TT in that manner adds weight and complexity without much gains in strength.

johnnygrosso (Feb 9, 2017 at 14:18)
Are people down voting this guy because they disagree with his criticism or because he is not joining in with the gushing? Bike looks really nice but doesn't twozerosix make some points?

twozerosix (Feb 9, 2017 at 14:25)
@johnnygrosso: I think because its easier to push a 'like' or 'dislike' button than formulate coherent thoughts.

frojoe (Feb 9, 2017 at 15:28)
Agreed with @twozerosix all other styling things aside, this is about as bad of a designed use for carbon as you can come up with. All the sharp ridges and peaks, and the pointy 90 degree edges at the end of the members.. add nothing but weight and cost to the design yet no strength increases at all.

Smokewag0n (Feb 9, 2017 at 17:17)
As a guy that works with carbon fiber (among other composite materials) I could not agree more. That being said I am pretty sure this is not a carbon bike rather, a 3d printed product of some sort.

bogey (Feb 9, 2017 at 20:14)
@Smokewag0n: definitely a rapid prototype used to scope out some style cues. I won't be surprised to see the actual frame with toned down lines and edges.

Mojo348 (Feb 10, 2017 at 0:02)
@bogey: So this is a free customer focus group on Radions new free look before they commit to molds? Leak photo of the styling model to PB and see the reaction!

johnnygrosso (Feb 10, 2017 at 1:17)
@Wouldhaveletmego: he made valid points, people down voted, i questioned that, you posted a comment...

twozerosix (Feb 10, 2017 at 7:19)
@Mojo348: yeah, valuable feedback for the design team if there's still time before final tools are cut.
Looking at their other bikes there are design cues in common between this model and others, especially that carbon hardtail. But what's odd about this prototype is the hard edge lines...which is why I thought it was a machined model. Tool builders might want to use a 1/8" ball end mill to create the molds, which will create the softer radii on the edges.

paulcgn (Feb 10, 2017 at 23:17)
"Carbon fiber doesn't like hard angular edges. " Yeah, absolutely right. And those edges won't like rock strikes. I can't think of any benefit from them aside from looks.

SorinGTI (Feb 10, 2017 at 3:11)
Looks a lot more like rapid prototyping than carbon fiber, especially where the rear suspension triangle meets the frame. It's square instead of being rounded. But anyway, really food looking frame. The F117 of bikes in terms of looks.

Hope their doing a raw version!

But maybe Mr. Stahl (CEO) persuaded him on building it.

But what only drawback with will surely be there is that with most 'forwarder brands' the reaches are quite short. Only the Strive CF Race XL has a modern long and slack geometry. But this is a thing of personal preferences so i think we have to wait and see.

The old Slide Carbon 160 was never a fully hardcore enduro to ride on the heaviest on trail. More a allrounder which struggled a bit when it came to really rocky sections!

2bigwheels (Feb 9, 2017 at 13:43)
Looks far stiffer than the SWOOP 200. Hopefully their DH bike will just look like a bigger version of this because this thing is awesome!

Minikeum (Feb 9, 2017 at 13:46)
I don't know anything about carbon, but this does not look raw to me at all (which doesn't mean I don't like that finish). I am not even sure it is carbon : maybe it's just a prototype manufactured just to see if everything fits ? But then again I don't know anything about carbon...
This is raw carbon : pbs.twimg.com/media/CcC8AVTWEAAHTN5.jpg

mikekazimer Mod Plus (Feb 9, 2017 at 13:51)
It very well may be a rapid prototype - it's hard to tell. There are also different types of carbon construction. Some use a woven pattern, like you referenced in that photo, and others are unidirectional, which results in a matte finish without any visible patterns.

miniator (Feb 9, 2017 at 13:54)
That is one type of raw carbon weave, probably 1x1 or 2x2. The Radon is another, which looks like Unidirectional. There are many different types of carbon weave available!

twozerosix (Feb 9, 2017 at 13:54)
My first reaction also. Thought it was a CNC'd foam model. Could be the unidirectional material with extensive sanding overall.

jzPV (Feb 9, 2017 at 14:14)
@mikekazimer: with unidirectional carbon you can still see different layers (at the junctions). I'd say this is a rapid prototype, too. the BB area and pivots seem rather imprecise...

Bigwill13 (Feb 9, 2017 at 14:17)
Have a look on my profile at the evil undead that's raw carbon unidirectional, it looks kind of dirty in the sun but so nice

enki Plus (Feb 9, 2017 at 20:13)
Not necessarily. Other responses have suggested UD carbon, but it could also be carbon veil over uni or twill. It could also be a matte paint coat over otherwise not so pretty carbon.... I vote for a mockup, hand finished and prepped for paint.

downhillnirvana (Feb 10, 2017 at 11:06)
I know it's a prototype and the finish is down to the material used... but mimic that finish on the production bikes with matt black graphics and the Pinkbike will comments section will look like money.

beeboo (Feb 9, 2017 at 22:21)
This looks awesome! Liking the squares edges and sharp angles over the industry standard flowy and curvy!

himwiththehair (Feb 10, 2017 at 6:39)
That's epoxy tooling block. It's usually green or pink but depends on the formulation

mjcutri (Feb 9, 2017 at 13:43)
@stumpymidget: He was trying to make a joke that the disc brake posts are in the wrong place for cantilever brake studs...

JMBMTB (Feb 9, 2017 at 14:30)
@nicolai12: to be honest i couldn't really tell you although supposedly the whole point of ABP is for improved braking over the classic horst design so i can only assume ABP is better however wether you'd actually notice that much of a difference when riding is debatable

Loamhuck (Feb 10, 2017 at 8:12)
@JMBMTB: This is the big question - looks sick, but does it perform better...that's really what matters...although designers can get different designs to acheive nearly the same leverage ratio, anti-rise etc. Should be interesting
Post a Comment