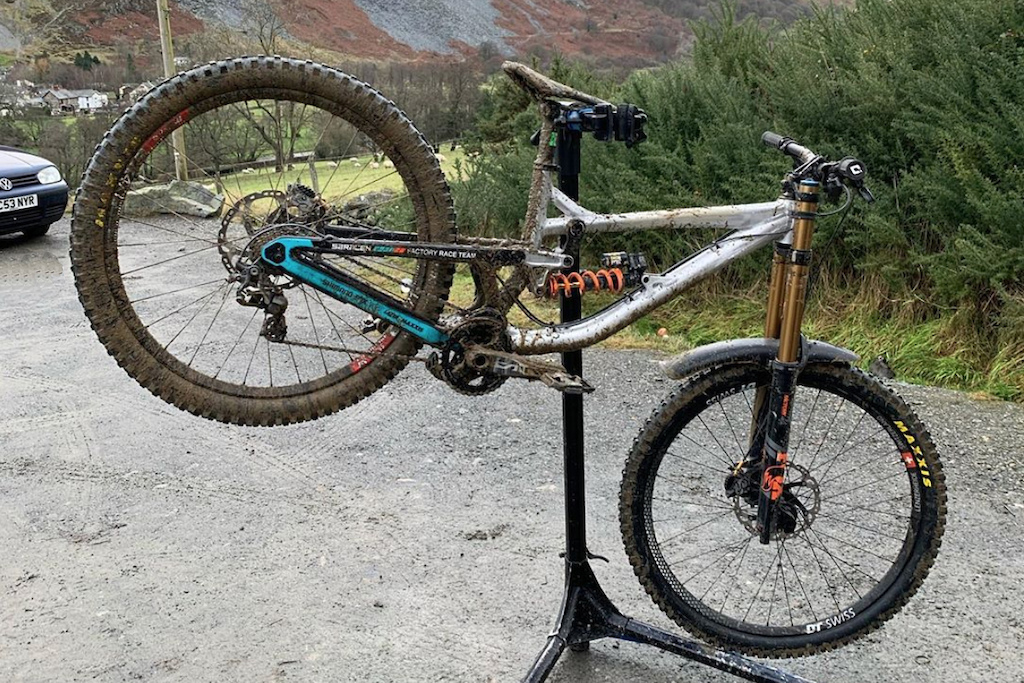 Saracen have got back to us to let us know that this isn't a dedicated mullet bike as we suspected but Matt is in fact testing a longer, 'XL' version of the Myst 29 as carbon Myst frames only go up to size Large. This frame has an extra 20mm of reach, bringing it up to 480mm, which should give Matt a bit more stability and potentially a bike that fits him better.

At the moment he's still experimenting but there's a possibility we could see this bike in Lousa if he likes it enough.

Self-snapped out in the Welsh winter during off season training, Matt Walker is on a Saracen Myst 29 with some differences to the bike he was riding at the end of last season.

Donning our Sherlock Holmes hats, we can see that it looks like the swingarm and upper short link are stock items, but the aluminium main frame and non-stock floating link look to be new pieces.

The floating link is similar to the ones Danny Hart and Alex Marin were sporting for the season with their mullet bike setup. When we spoke to Danny about his bike in Maribor last year, he told us the link was mainly to correct the geometry changes that the smaller rear wheel brought. There's no news however on any suspension characteristic changes with this new link. 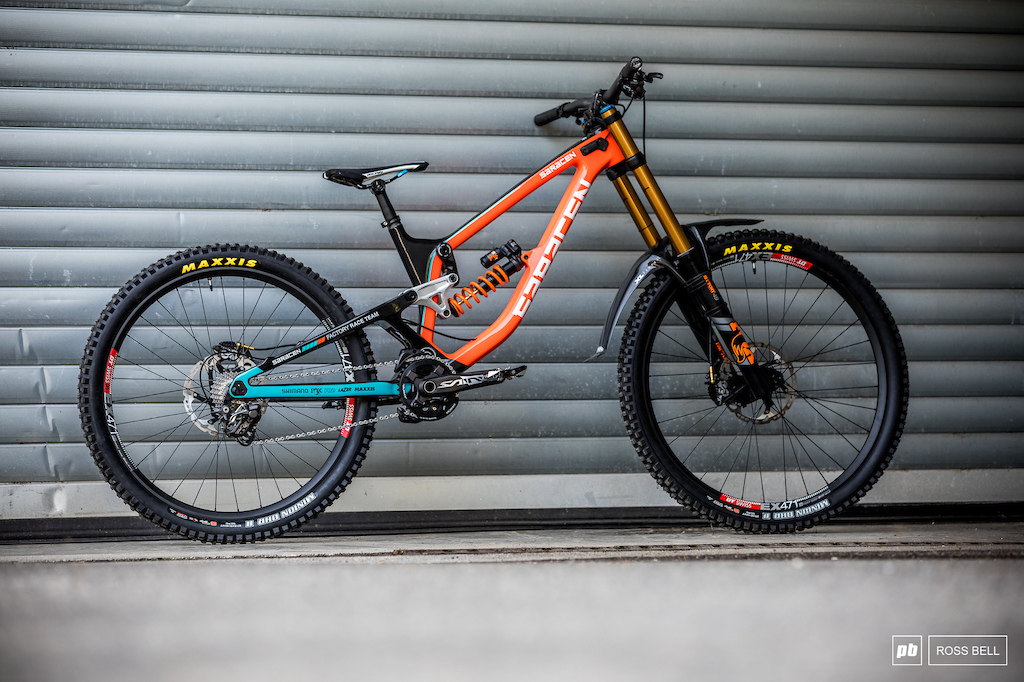 Danny's 29/27.5 race bike from early 2019.
The main frame sees a switch to aluminium from the production bike's carbon fibre version. It's fair speculation that Madison Saracen are experimenting with geometry changes if they've made the switch back to aluminium. It's hard to see what exactly has changed, but it's possible Matt is trying out a dedicated mullet setup. The switch to an aluminium front triangle could also open up options to adjustments in the suspension too, with the main frame housing the upper link pivot, shock mount and main pivot - although it looks like the main pivot remains close to the chain line.

Wheel size is nigh on impossible to deduce from the photo, or read from the wheels. Next time you post a photo, Matt, can you clean your bike? Although we did notice that Matt, like most of the top-level DH racers, continues to run the out-of-trend, narrower 471 rims from DT.

One notable absence on Matt's bike is the floating and adjustable brake arm we saw last season. The floating arm mounted the brake on an extra member of the suspension system to reduce the brake's effect on the suspension. The floating arm looked to be adjustable to suit the 2 chain stay length settings of the bike, even though we've only ever seen it run in the long setting (Matt looks to be running the shorter chainstay setting on his new prototype). Whether the team continue with a floating arm or carry this into any future designs, we'll just have to wait and see. 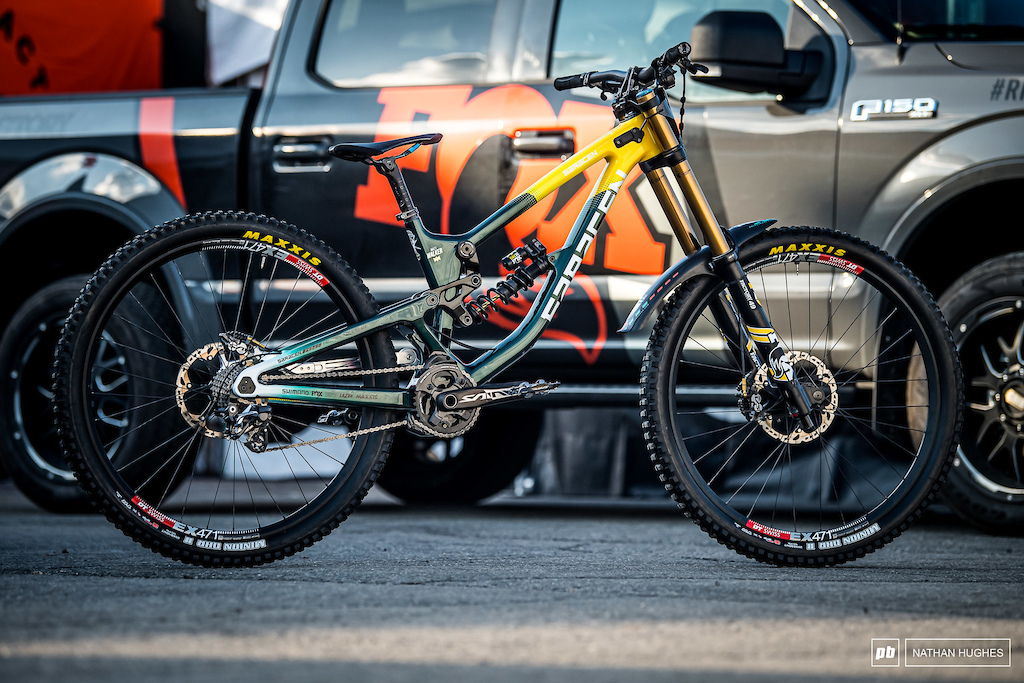 Matt's Saracen Myst from last year ran 29"/29" wheels and was in the longest chainstay setting. The aluminium prototype rig looks to be set in the shorter chainstay setting for now. Is that an indication of a smaller rear wheel?
We've reached out to Saracen for further details and will let you know if they give us any further information.

Now hey, my little princess is named Madison so we’ll have none of that talk

nyhc00 (Jan 6, 2020 at 7:44)
I rented a Myst this past summer for a day at Morzine and i really liked it. Haven't rode a dedicated DH bike in a few years and it was comfortable right away. Not the best jumper in the world but then again i didn't spend much time dialing it in.

They are only 25mm internal, but I really didn't notice a huge difference when going to 30mm rims. (though I'm not racing WC DH).

Plus, that Gwin tire-less run was insane, and the rim held up.

preston67 (Jan 6, 2020 at 11:19)
Question for me is if tough/light is the primary recommendation or if there is a performance preference for the narrower footprint ? I really enjoyed the move to wider rims on my trail bikes and have been surprised it hasn't caught on in DH. I"m just about to order some new 29" DH rims and was fairly inclined towards 30mm. It makes sense to buy what I think works best for me not pro racers but it does have me 2nd guessing.

stumphumper92 (Jan 7, 2020 at 6:23)
@zyoungson: Exactly... Everybody's a weight weenie but really it only matters if you are racing, specifically xc. Enduro and trail and especially DH do not make much of a difference, if any.

Niseach1 (Jan 6, 2020 at 13:06)
He was at Revs yesterday with his girlfriend. Shared an uplift with them. There was that much slate and muck covering the bikes, it was difficult to tell who was riding what. Great day though at a top place.

shedsidechuck (Jan 6, 2020 at 12:12)
like most top-level DH racers, Matt continues to ride the out-of-trend narrower 471 rims.....ok, well they seem to work for riders not following the trends, and probably not for those riders who follow the trends?

TheBearDen (Jan 6, 2020 at 7:42)
You would think with an test mule alloy frame you would build it to be able to use an adjustable headset.

TIZZASPAIN (Jan 6, 2020 at 8:46)
sometimes carbon components are so hard, not comfortable to ride, just can be a reasson.

davechopoptions (Jan 7, 2020 at 13:20)
@TheBearDen Looks like it does - similar looking cups to the production carbon bike which comes with a neutral and a +/-5mm set off cups.