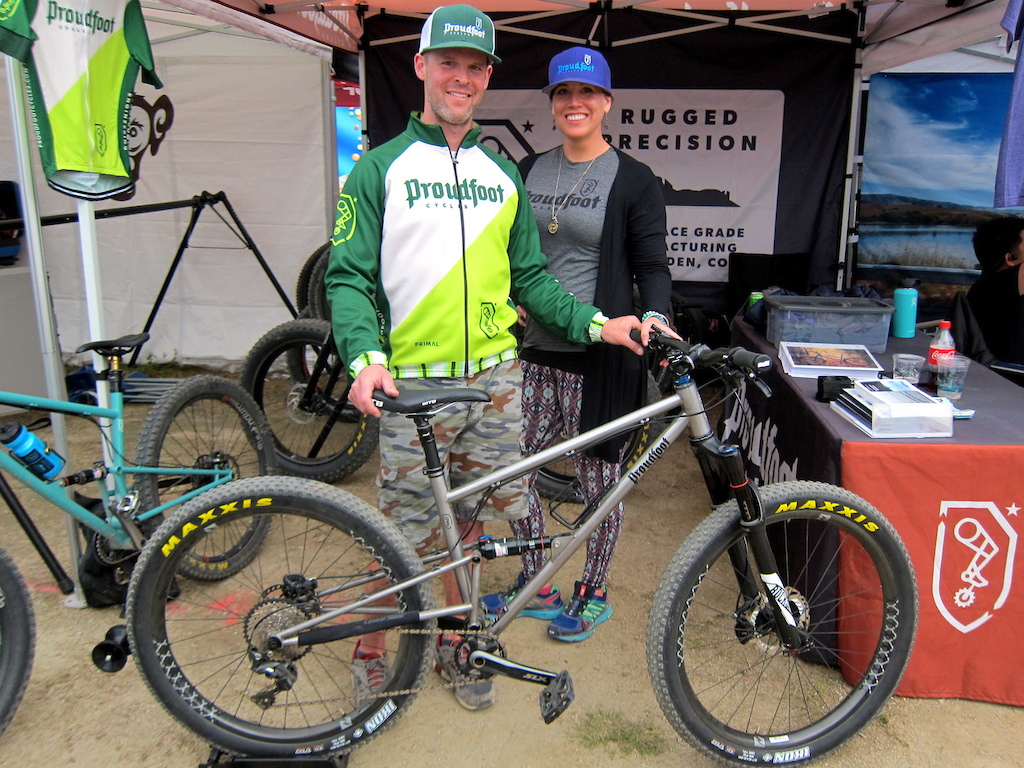 The 125-millimeter-travel Prime is one of two dual-suspension designs offered by Proudfoot Cycles in Golden, Colorado. Founder Jon Acuff came from the aerospace industry in Southern California. Jon decided to try his hand at frame building, which struck a chord and inspired he and his wife Erin to found Proudfoot Cycles and move to Golden Colorado. Jon says he is directly related to the Wright brothers, who also were bicycle makers, and his creations reflect the famous duo's pension for meticulous construction as well as their distaste for nonessential accouterments or ornamentation. Proudfoot's philosophy is "Rugged Precision," and their choice of material is chromoly steel. 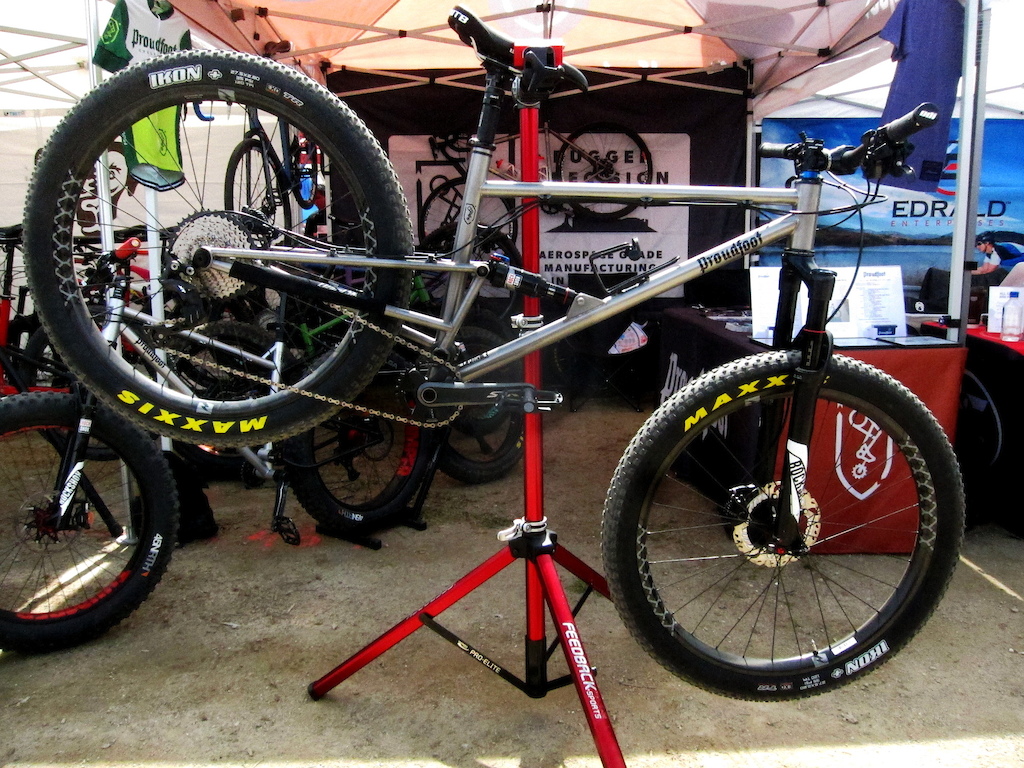 The five-inch-travel Prime chassis has a single-pivot rear suspension that pivots on a sealed-bearing Cane Creek headset. The elevated chainstay design, says Jon was chosen because it allowed him to use straight tubes to construct the triangulated swingarm. Smaller diameter frame tubes optimize the strength of the material, and external guides for the cable-housing and hoses ensure that the tubes will not be compromised by drilling holes to route them internally. The bottom bracket shell is threaded, which should make traditionalists jump for joy, as will the provision for a single water bottle. Welding and construction is excellent and, in spite of its simple design, the chassis looks sharp. 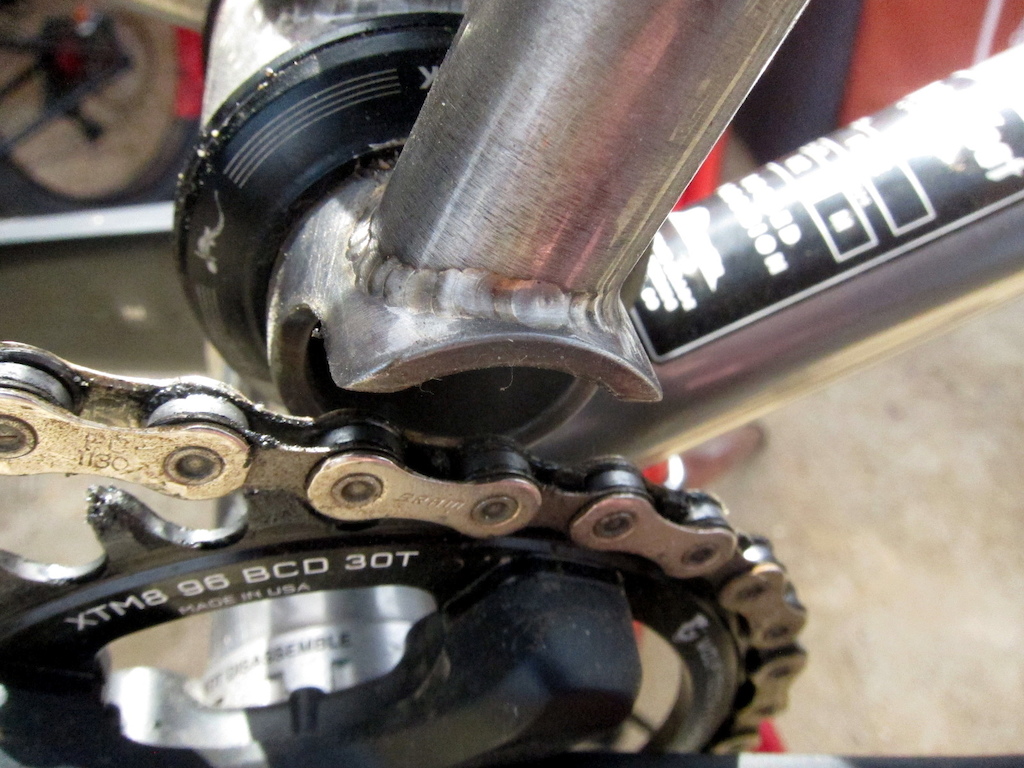 Cut-away swingarm boss and a look at the Cane Creek headset pivot bearings. 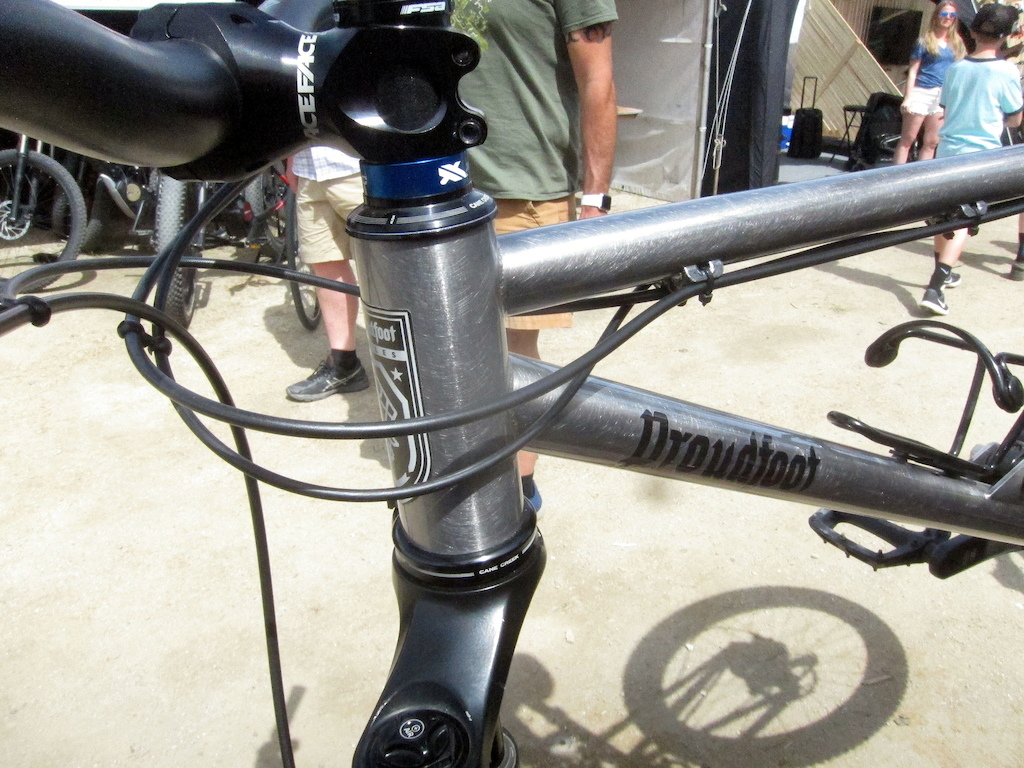 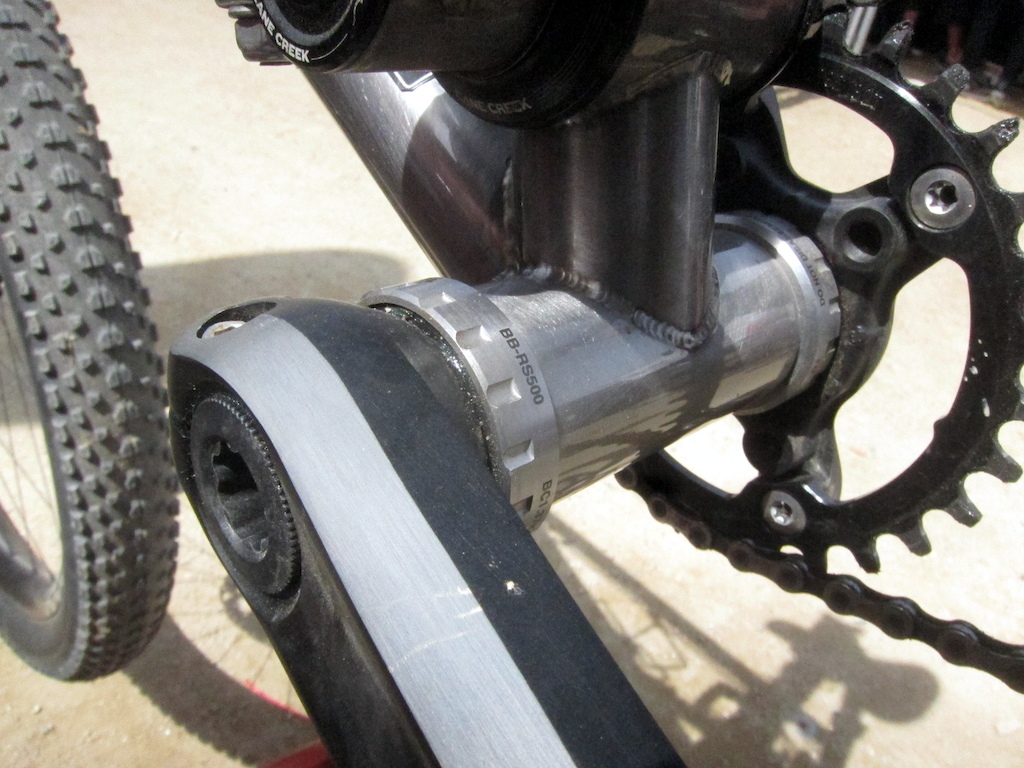 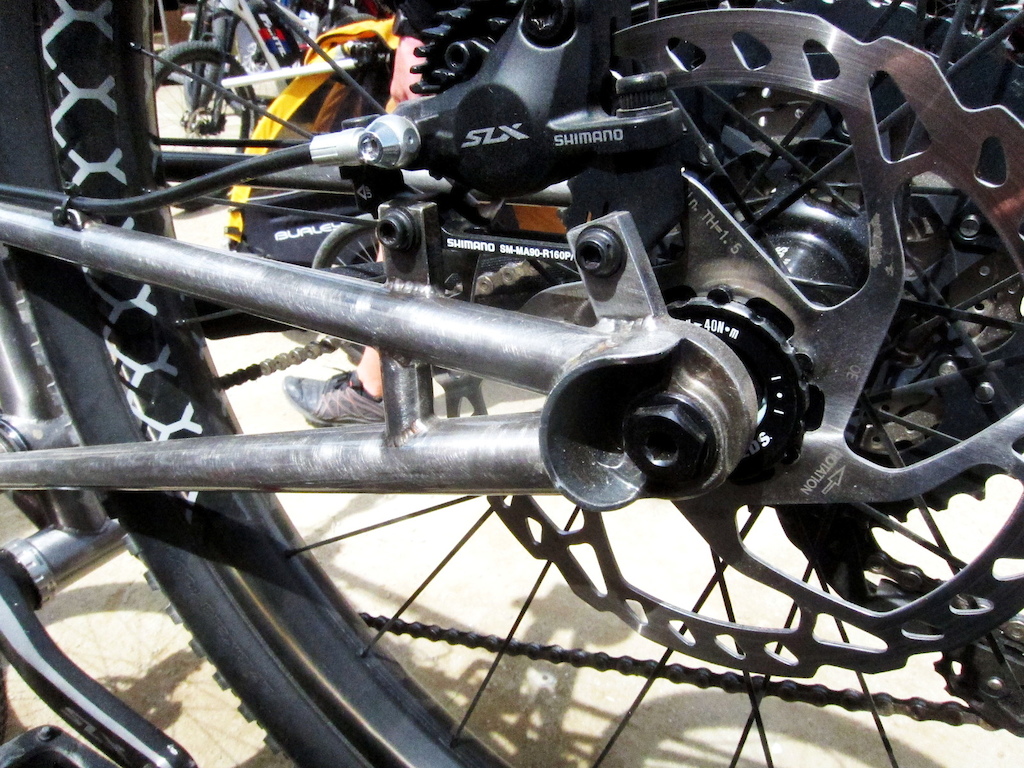 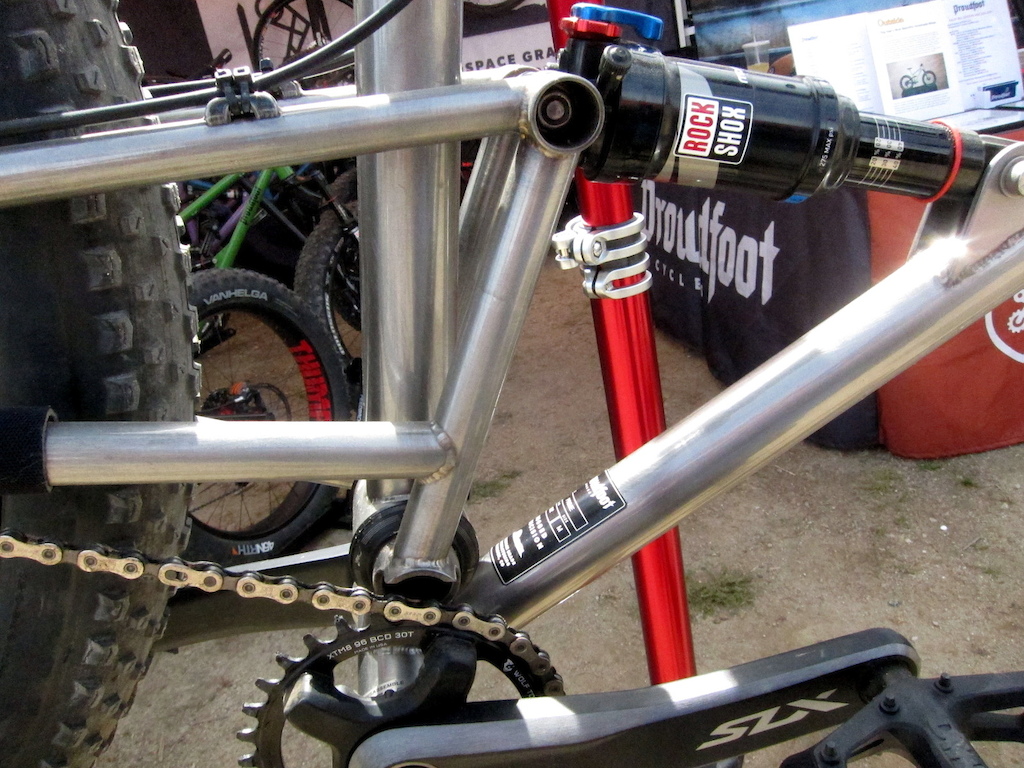 The right stay is elevated to clear the chain,and help provide tire clearance.
Jon says that the Prime is convertible from 29-inch wheels to 27.5+ and the rear axle spacing is 148 Boost. With its RockShox Monarch damper, the medium sized frame is said to weight 7.25 pounds (3.3kg), which is quite respectable for a steel suspension chassis. Frames run $2750 USD and three builds are offered, which run from $6510 for the Race model, to $5050 for the Adventure option. Sizes are small, medium and large and five colors are available, including clear-coated raw steel. Proudfoot Cycles sells direct to customers through their web store. Riders searching for a simple to maintain and rugged trail bike should check out this one. 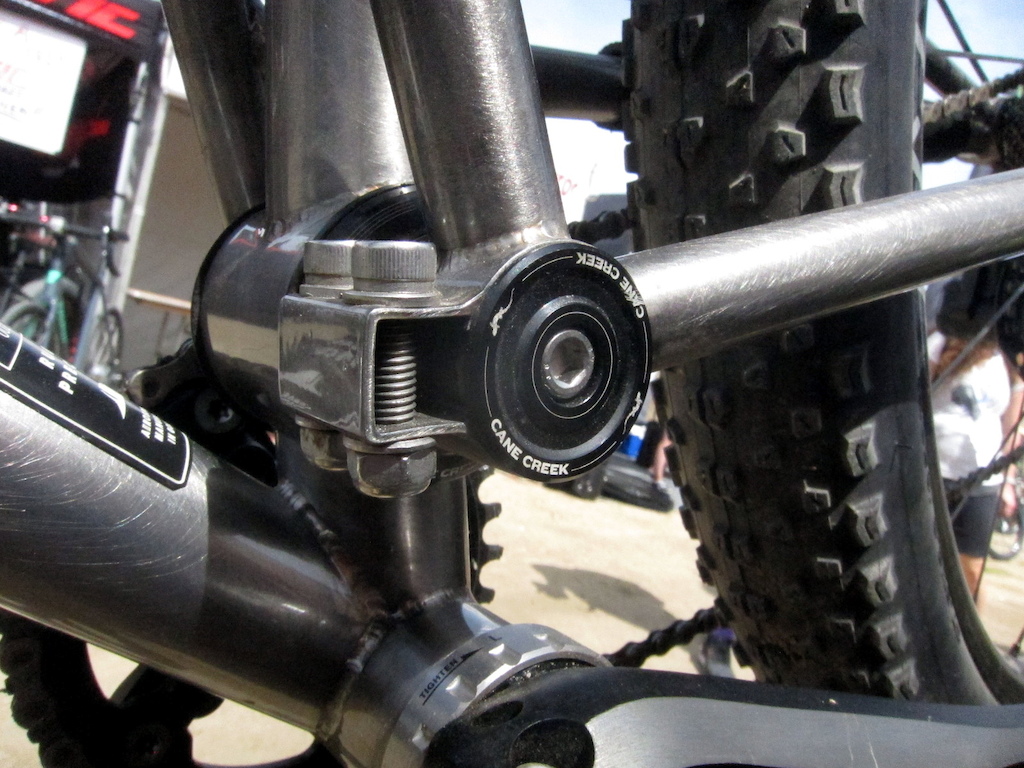 A look at the lightweight clamp that retains the swingarm's pivot shaft.

XIVXV (Apr 23, 2017 at 2:10)
Steel is more alive than in the past few years as more people realise most aluminium and carbon frames only seem to last until the warranty time is over.

Boardlife69 (Apr 23, 2017 at 3:36)
Steel is real. Might be my next frame material. Actually I have a problem of components wearing out before the frame. Then the cost to replace the worn components exceeds the price for brand new bike. Still, I might just steal a steel frame. Old school meets new school sexy.

vikb (Apr 23, 2017 at 8:45)
My Al all-mtn frame is still going strong 9yrs later. My carbon all-mtn frame is entering year #4 with no issues. I just got a new AL frame that will likely last more than a decade.

Singletrackmac (Apr 23, 2017 at 8:58)
It's also faster, lasts longer, looks better and can be repaired easier. I have been waiting for a long time for some quality full squish steel options.

Not sure why pinkbike hasn't done an article on the starling murmur yet, but I have yet to see a bike on this site I want more than the murmur.

bigbadbikeman (Apr 23, 2017 at 9:33)
Because typical steel alloys have a much higher infinite fatigue life then comparable aluminum and carbon materials

If a company built frames that didn't break, they'd be 1-2 pounds/500g-1 kilo heavier than they are today. While some brands DO push that limit too far (and they usually have a garbage warranty-looking at you Big Red S!) on balance, having a light frame that rides well is what we all want. If you're a strapping 200lb/90kg rider who rides big lines, yes you may want a custom frame built with burlier tubing.

I'd rather have a reasonably light bike for my 160 lb/73kg frame. The rear end on my Giant Trance cracked last year, and (bonus to Giant, they have a lifetime warranty) I had a new rear end bolted on within a few days (also a reason to shop your LBS).

Steel is a good frame material, but on full suspension bikes in particular, the cost and weight of building a reasonably strong chassis make is less than ideally suited. That said, on a nice hardtail or roadbike, it can ride nicely and be pretty durable. However, any material is only as good as how it's utilized.

The renolds 853 cromo bikes where the best cromo ever built

XIVXV (Apr 23, 2017 at 13:27)
@peleton7: I agree - I also want a bike that is light and does not break. And I am willing to take the 500g extra when I can be sure that it will last longer than just two years - and I think anyone would expect that from frames that cost as much as a used car.

Recently my not overly light 3.4kg alloy trailbike frame broke after 2 years (and I am way below 200lb) and I decided that I would only go for something with a better warranty. I mean not some ridiculous warranty like I've read at some manufacturer that is void if I change the seat of the bike. I mean something where the manufacturer trusts in their products.

As it is quite hard to find a manufacturer that seems to really trust their own products (which means a good warranty) I thought maybe at least the material (steel) would be some kind of a warrant for not breaking all the time.

Singletrackmac (Apr 23, 2017 at 14:19)
@peleton7: Yes, the material must be utilized correctly, or in other words, the frame needs to be built well. Keith Bontrager was talking about steel when he said "strong, light, cheap... pick two" which to me means steel needs to be built right to work well.

I own quite a few old late 80's/early 90's steel MTB frames including a Bridgestone MB1 (Japenese made with Japenese made Tange Steel) and a Bontrager Race (American made with American made True Temper Steel). The mb1, while very compliant and lovely to ride, turns into a wet noodle when pushed while the bonty remains responsive and lively when stressed and my XXL bonty weighs in around 23lbs. I am 220lb so i am pushing these old bikes pretty hard.

es7ebanlv (Apr 23, 2017 at 16:09)
@XIVXV: speaking from my experience, Trek replaced for free my old 2006 frame for a new 2013 when the old one broke. No questions asked. And that's in Mexico, where you usually have to suffer with stores and authorized dealers.

pinhead907 (Apr 23, 2017 at 4:17)
Sort of agree. I think the idea of using a headset as a pivot is literally genius - but the last pic looks a little too home-brew for a bike that expensive. Seriously - you can go to any bike shop and get a headset. Great idea.

maxyedor (Apr 23, 2017 at 8:14)
It was the brake calipers mounts for me. Those would be $5 to have waterjet cut with a nice radius. Why oh why did they choose to slap some crappy bits of flat at on there instead?

The welds are a little goobery too. Love seeing small shops building cool frames, especially when they do innovative stuff like the headset bearings as pivots, the the level of craftsmanship needs help

bikemonster2 (Apr 23, 2017 at 6:21)
looks like a garage build i cant see why you'd want to buy this for 7k considering the really amazing carbon offerings and orange bikes or the sc heckeler if you want a more refined single pivot.I cant see the value proposition here? more expensive not as good dosen't make sense

whitebullit (Apr 23, 2017 at 10:29)
@mhoshal: im just a bit sour from their lack of customer service and general deniability. an american company that doesnt stand behind their product leaves me no reason to support them and quite frankly im against company bashing when shit breaks but they are on a different level.

naisemaj (Apr 23, 2017 at 5:52)
You had me until that suspension clamp, surely that is a bad way to do that. The bearing interface doesn't even look machined!

AyJayDoubleyou (Apr 23, 2017 at 3:22)
Suspension experts - orange bikes (set aside your opinion on their appearance) have been refining their single pivots for decades. And they have gone for a pivot forward of the bottom bracket. What difference does this make? And is it good?

HardtailsAreGnarly (Apr 23, 2017 at 4:11)
Pivot location makes a big difference in varying factors that dictate how the bike rides, such as anti-squat, leverage ratios etc etc. I'm no expert in this at all, I'm only aware of what changes when you move the pivot location. If you want to see for yourself what happens when you move it I would recommend installing linkage (you can get the demo for free) and having a play around with pivot locations, and then looking at the graphs produced.

ibishreddin (Apr 23, 2017 at 6:53)
Look up "andrextr suspension" on YouTube. He thoroughly explains everything about the location of pivots, leverage ratios ect

jason475 (Apr 23, 2017 at 6:50)
I really enjoy seeing these small shop bike creations. If you are passionate about something and dont like the offerings, than make it yourself. Always intresting to see someones own fix or idea for a bike industry standard. But $7000 is pretty steep for a bike as raw as this. unfortunately, you have to gamble whether the small shop will be in business next year or not to take care of any warrenty work. And that is alot of money on that gamble. Very cool bike though.

slayersxc17 (Apr 23, 2017 at 5:57)
Check out Daambuilt cycles. Steel FS out N. Vancouver. I miss my steel hardtail, now I love my aluminum FS, but miss having steel. One bike for me, now with these low and slack steel FS, I may have to start shopping around.

I really like what you've done with the frame. Can you speak to the hoods above the BB and at the rear dropout? Can you still use a QR rear? What is the limit on the size of the front chainring?

Proudfootcycles (Apr 25, 2017 at 17:38)
The hood over the chainring is the main pivot axle notched to clear a 32 tooth ring max and the suspension kenimatics are optimized for a chainring of 28-32. The hoods on the back are Paragon round thru axle dropouts. The rear axle spacing is boost (14

so that limits the axle choice to the thru type. We do custom work also so if you can't find what you want off the shelf we can make it happen. Cheers!

NoahWeimann (Apr 24, 2017 at 8:30)
The whole idea of a startup, minimalist, bike is cool, but it just seems poorly done, and the unsupportive small brand thing gives me bad vibes. It's creative, ill give them that, but the headset as suspension pivot will wear out after a few days of legitimate, rough, trail.

watchtower (Apr 23, 2017 at 4:02)
Top stuff, seems to be a resurgence of steel suspension bikes getting made, the brake tabs and swingarm pivot clamp could be neater but that's easy to sort. Good luck in business Proudfoot.

Proudfootcycles (Apr 25, 2017 at 17:58)
You are correct. This frame will only fit a 32 currently. As with most FS bikes the chainring diameter affects the chain line which then determines the anti-squat behavior. It is unrealistic to promise one frame design that can utilize a large variety of chainring sizes without compromising the suspension performance. Our home trails in Golden Co have some really steep and technical climbs so we optimized this design for that.