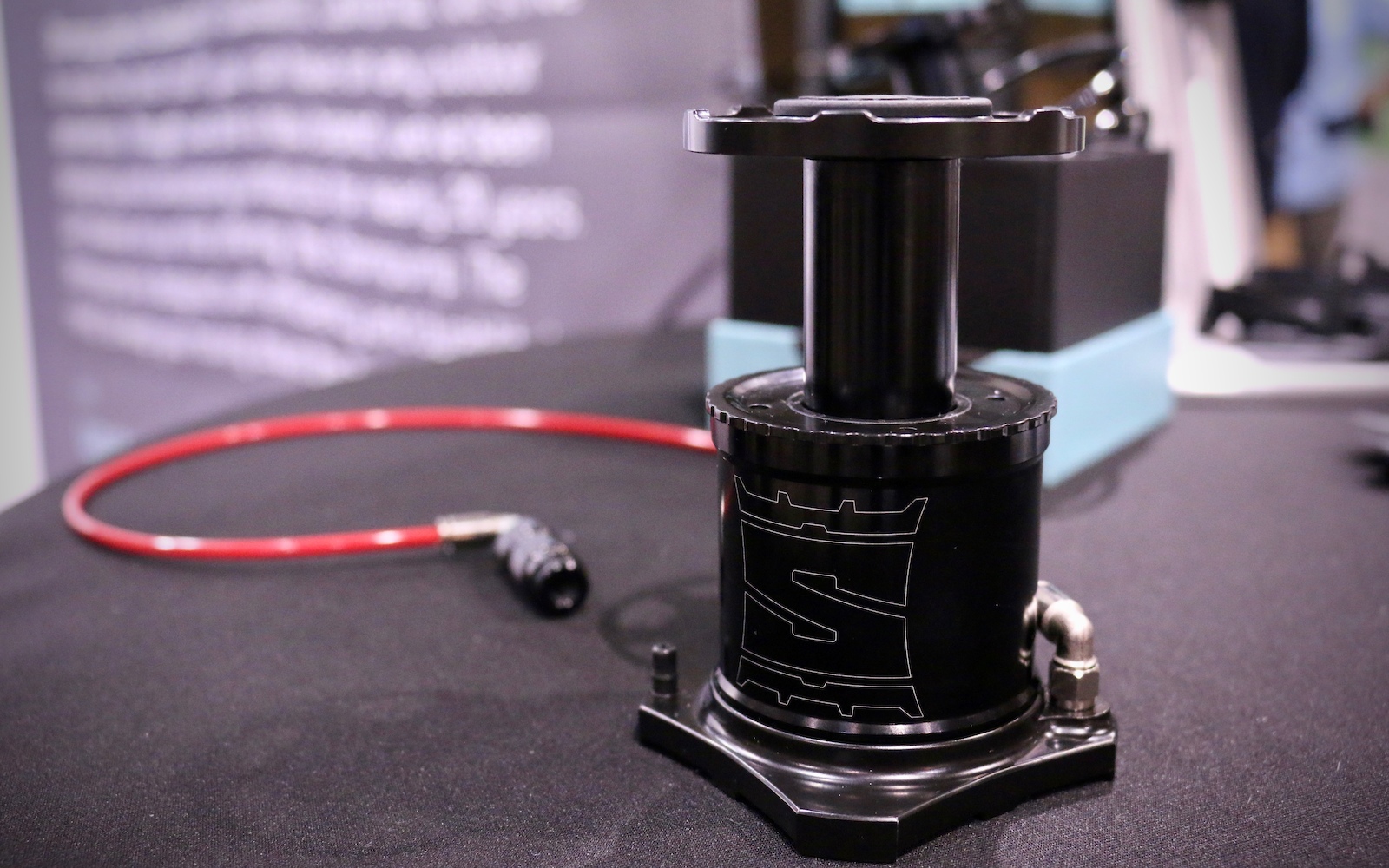 Alright, I realize that this is a mini-pump, and I know you guys want to see photos of new and previously unseen downhill bikes, components, and anything made by a CNC machine, but things are pretty slim here in Reno. Also, this foot-operated pump from Stompump is actually pretty cool and intended for high-volume, low-pressure mountain bike tires. You know, like the kind we use.

The company crushed their Kickstarter goal by getting 745% of the funding they were looking for, and they're only a couple of months away from production units that will go for somewhere around $90-ish USD.

Stompump is saying that their foot pump will inflate tires up to three times as fast as a normal mini-pump, and you might be wondering how it's able to do that given that it's much, much shorter than a traditional pump. The answer is that while it's short, it's also very squat, so much so that the massive piston inside the air can pushes more air during a shorter stroke than most pumps do with a much longer stroke. Also, you're doing the pumping with your leg, which is full of much stronger muscles than what's in your arms and shoulders.

Air moves through a long, thin hose that's connected to the pump and chuck via quick-release pneumatic fittings; all you need to do is push the small spring-loaded collar and the hose comes off. When not in use, it's wrapped around the pump's air can.
Stompump 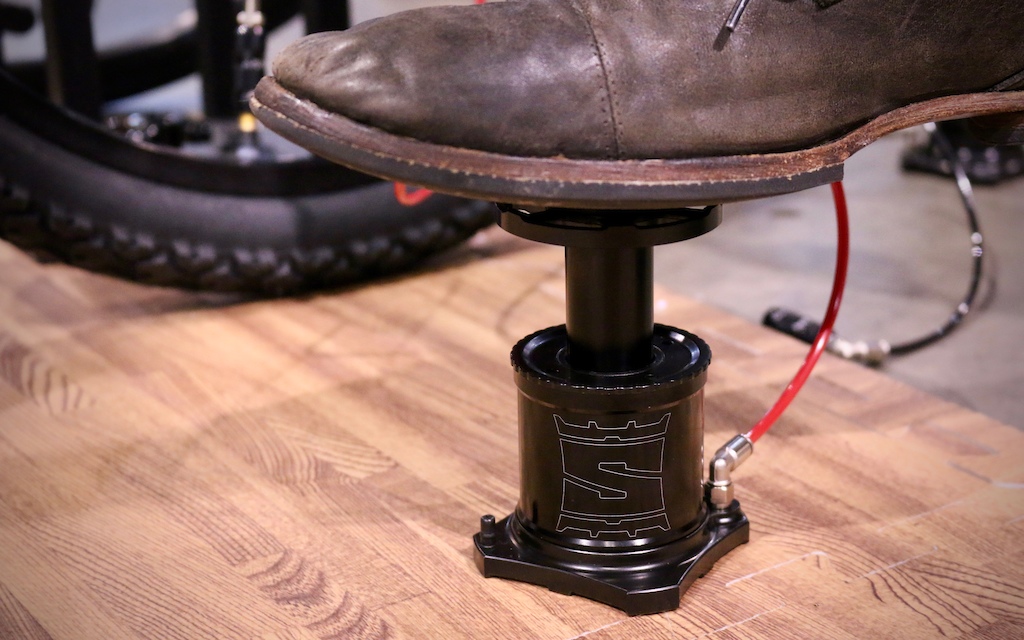 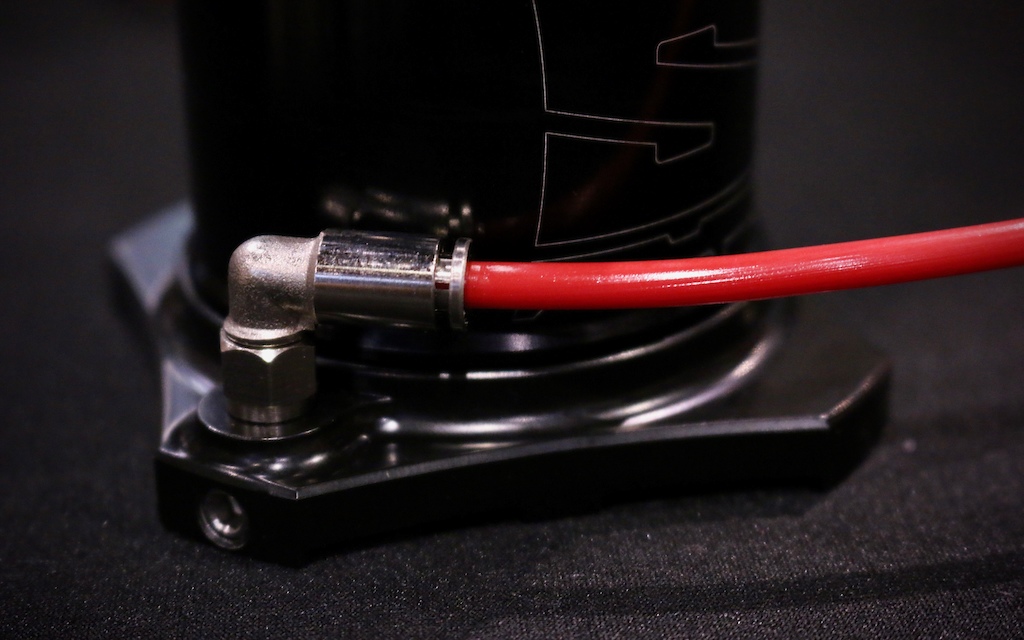 The foot-operated Stompump is small but quick, with the high-volume air can and huge piston moving a load of air up to its 60 PSI maximum.

The stubby Stompump is mostly aluminum, with a Delrin piston and steel return spring hidden inside of the large-volume air can, and the rubber cap for the hidden storage compartment in the top of the pump. There's a filter just under the top cap, too, but not to keep you from filling your tires with dirty air. Instead, it's so that the pump isn't pulling in dust and grime that could eventually damage the seals. Like most pumps, it's also easy to take apart, clean, and reassemble without any tools. I know ya'll are totally out there rebuilding your mini-pumps, right? Yeah, me too.

Stompump says that their little guy will top out at around 60 PSI unless you really put some muscle behind it, so it's mostly intended for mountain bike use more than anything. It comes with a bottle cage-style mount, but you can't use a cage and mount at the same time, unfortunately. Instead, there are two slots in the mount for zip-ties, so you can put it somewhere else, too.

The pump goes for $99.99 USD on their Kickstarter page, but they say that it'll probably come down to $90-ish USD when it's available in a few months from now. That's a big chunk of money for a pump, especially when there are all sorts of options out there for much less money, but I can see it being a success regardless if it really does inflate tires three times as fast as a normal mini-pump. It also feels like a high-quality unit in my hands, unlike that countless and nearly disposable tiny pumps out there. 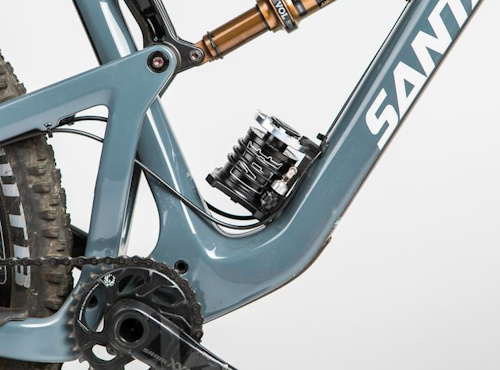 It's not nearly as inconspicuous as a traditional mini-pump. 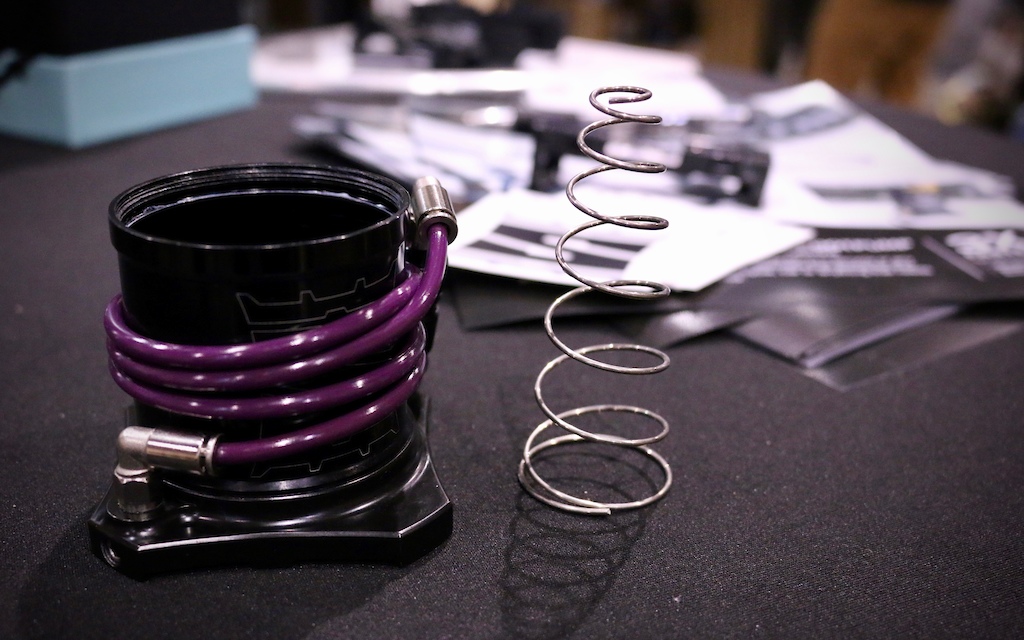 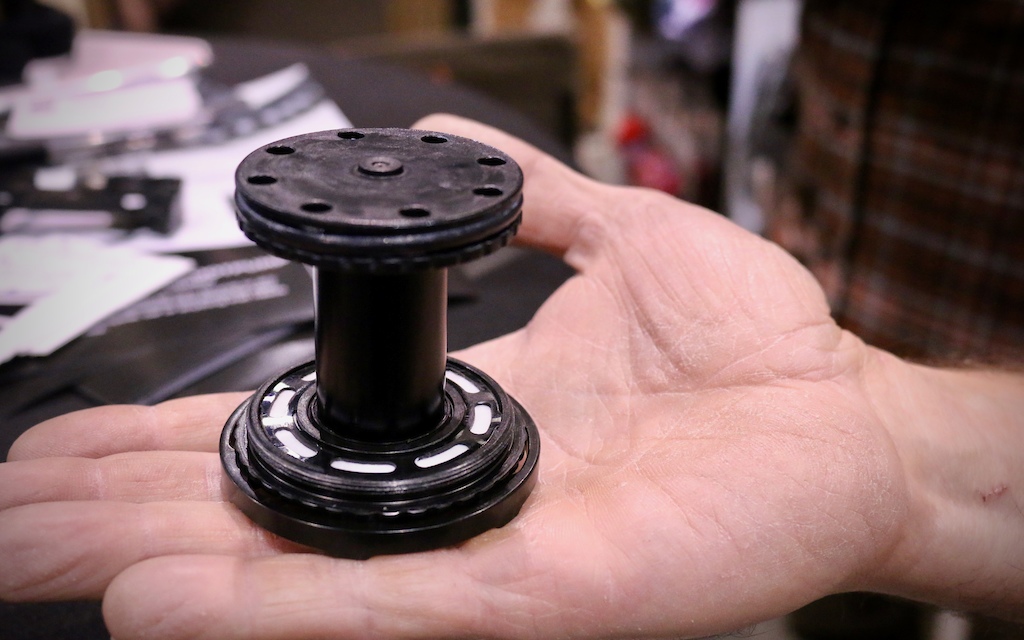 You don't need tools to open the Stompump up, and a filter under the top cap should keep it clean for a long time.

Nearly $100 USD is a big chunk of money to shell out for a mini-pump, no matter how neat it is. But if it works as well as they say and proves to be reliable, would you consider buying one?

schighball (Sep 18, 2018 at 18:07)
I won't be needing this, I've gone full enduro and completely filled my tires with overpriced pool noodles.

westcarlson (Sep 18, 2018 at 18:11)
Its not about pumping up your tire its about showing our friends how cool you are

scott-townes (Sep 18, 2018 at 20:50)
I fill up my enduro tires for my enduro bike which is used on enduro trails with my smugness and tendency to misuse terms in order to sound unique.

felimocl (Sep 19, 2018 at 13:10)
While fitting some of the new Vittora tire inserts in work thevother day, we all came agreed that a noodle would do the same job!

scott-townes (Sep 18, 2018 at 20:53)
@Buc-Nasty: hipsters never get flats. the tire usually loses pressure due to manufacturer defects in the tires, rims or tubes so its up to the local shop to fix it for free while the hipster tries to get compensated for its precious time lost.

fred-frod (Sep 19, 2018 at 13:47)
I think it's more a physical limitation, since you propably do not weigh enough to achieve that pressure. Like the diameter of the piston is too big.

rellinger (Sep 18, 2018 at 18:34)
With all the bitching and moaning about water bottles these days this seems counter productive. I have one water bottle mount on my Enduro. With a traditional mini pump and a offset mounting bracket I can have both a water bottle and a pump on me at all times. Although I could see a slightly larger version of this being a good replacement for my floor pump. Skinny wrists, weak child arms and all...

blowmyfuse (Sep 18, 2018 at 19:56)
If they made this the center of a front hub, you could just take your wheel off, run the hose from the hub to the rim valve and pump. You'd never have to carry a pump again. Granted, you'd have to take your front wheel off to use it as the pump for your rear wheel, but basically, you'd only have to carry that hose and valve chuck.

fattyheadshok (Sep 19, 2018 at 22:17)
Uuuum really? So... that front hub thingy needs like bearings and an axle thingy inside of it that could take up the space where the pump’s piston would go. Could pose an issue.

ehvahn (Sep 18, 2018 at 19:53)
Specialized makes a sweet floor like pump that comes in a little case that I keep in mine. Alot better for that application, and cheaper.

Kitejumping (Sep 18, 2018 at 18:17)
Looks cool and probably very well designed, but it's still heavy, gets rid of your water bottle cage, and is expensive.... Why would anyone pick this over carrying a couple co2 cartridges and a small hand pump as a backup? Could have been more functional too if the cage also had some storage built-in to carry a tube or tire plugs, but some overpriced rebranded bike specific ski straps work fine for that too.

Sshredder (Sep 19, 2018 at 9:37)
Try fitting that in your fanny pack jack. It's a micro fatty pump. Easy to miss place in the shop. Odd shape for putting in a pack. Looks very cute mind you. If only they had an anodized purple version it would make an exelent paper weight for my desk.

TucsonDon (Sep 19, 2018 at 14:25)
About ten years ago, maybe, but I can't see spending this much, or carrying something this unwieldy around for the one flat I get every three years or so since I've gone tubeless. I just carry a CO2. I haven't had to use one on my mountain bike in over two years though.

sspiff (Sep 18, 2018 at 18:15)
Yeah right! I fought long and hard to use those two bolt holes for a proper hydration vessel. On the other hand, this might do well in the front triangle of a Jeffsey.

pacificnorthwet (Sep 18, 2018 at 19:01)
I have no idea why I would want something so heavy, bulky, and expensive, and yet for some reason I really like this idea...

@mikelevy I know what you mean, I much prefer the feel of a high quality unit...

shedsidechuck (Sep 19, 2018 at 16:24)
a pump? I am totally unable to pull my tires off my wheels even with steel core levers inless I have soapy water,
some motley crue playing in the background, and 20 minutes! 30 minutes for the DD casing in the rear!

Muckal (Sep 18, 2018 at 22:59)
During my moto days i always wondered what a piston return spring looked like. And there it finally is!

vinay (Sep 18, 2018 at 23:09)
It isn't too nice for those who invested in the project on Kickstarter if they had to pay more for the pump than those who buy it afterwards.