Join Pinkbike  Login
I go through a lot of different bike parts and gear. Some of it wears out or breaks, some of it I really regret buying, and some of it I swear by. Stuff Mike Rides will show up every now and then whenever I get around to writing it. All of the stuff that I don't feel like writing a 9000 word review on will be in one of these. More than anything though 'Stuff Mike Rides' will be about how things held up over the long haul.

Edition #1 has got some Syncros Mental pedals, Crud Catcher fender and Troy Lee's SE glove. Enjoy....For me there is really only one choice when it comes to pedals. I bought a set of Syncros Mental pedals nearly two years ago now and despite my constant urge to buy new things I can't justify ever using something else....Or even buying a new set of Mentals as these things are built for the long haul. Like many other riders, I've gone though a lot of 'regular' pedals over the years. It's common knowledge that set screw pins bite a lot more than regular flat-top pins, and that a slight concave helps to keep your feet planted. Syncros took it a step further by using a sort of split steel screw that creates the grippiest pedal on the market. All Mental pedals come with two sets of pins, a regular length and a slightly longer version. I can't imagine wanting the longer pins but they are there if you need them. 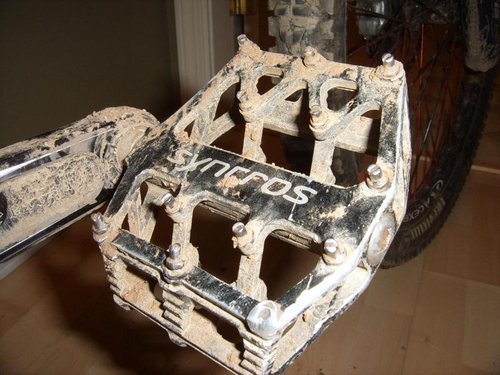 Don't be a noob like me, wear shin pads

They spin on one 12mm needle bearing, a 20mm split bearing, and two cartridge bearings. After two years of shit kicking I have yet to rebuild them as they still turn smooth! I run the aluminum Mentals (503gms), but there is a sweet white magnesium version (472gms), and two steel versions (800gms+). My aluminum pedals have hit the ground way to many times and they are still truck'n, so I'm glad that I didn't take the nearly 1 pound weight penalty for the stainless or cromoly versions. The only downside I can think of is your smelly kicks may not last as long as they are a little hard on the soles, which is ok because you're riding shoes are haggard anyways!

The Mentals are nearly bombproof and provide an amazing amount of grip. Great pedals.

I don't like fenders. I don't think many riders do, especially the ones that remember those god awful moto inspired hunks of garbage. But there are times when I wish I had one. Not the big over done things from the past, but a nice little mud guard that keeps the spray out of my eyeballs. One particularly nasty day at Whistler this year I caved and strapped on a Crud Catcher ZX. Best thing I could have done. 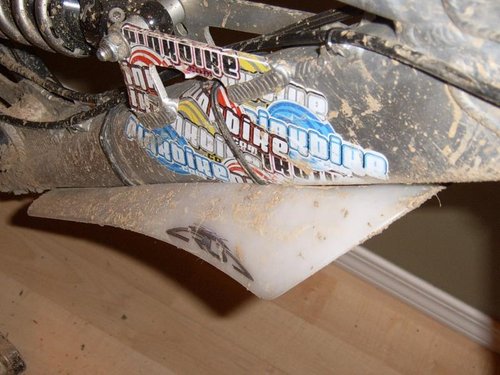 Does more catching than Tyler

It's a neat little unit that sits under your down tube and is mounted with two O-rings, I can't think of a bike this wouldn't fit. At only 52 grams you can make up more than that by sitting on the pooper before going for a ride! It keeps my googles cleaner, doesn't make a racket like a lot of fenders do and most importantly, it comes off real quick when it starts to dry out......It is still a fender after all!

It's Fall, so it's going to be wet. Put the Crud Catcher on and then go out and play.


I'm not too picky about anything really. Food, weather, or women, it's all the same to me. One thing I am choosey about is the gloves I use. Lately I've been rocking a pair of Troy Lee Designs SE Glove. After years of running other brands, I am pretty stoked on the SE. As with all the parts and clothes that I use, looks are far more important then function (that's lesson #1 kids). These mitts don't let me down. Bright red tops with flashy blue rubberized moldings and a big 'ol TLD logo on top just in case you forgot where they came from. There's a small Velcro enclosure on the cuff and a nifty little pull tab on the underside to pull them on with. Best of all, they actually say "pop wheelies" on the cuff. Wear them with black kit and at least you'll look fast! 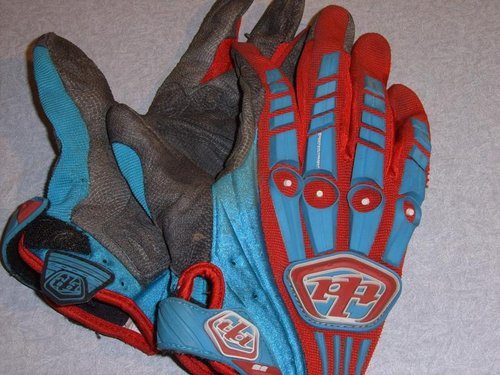 As far as gloves go, these are pretty glovey (ya I made that up). A glove's palm makes all the difference for me. When a glove has a load of padding on the palm it doesn't give me that up close and personal feeling that I like, I feel detached from the bike. The SE has no padding, only double layer Pittards leather, so it's tough but at the same time I don't feel like I'm holding onto the big end of a baseball bat. After months and months of riding and washing they are still going strong. Despite having some Air-Prene, I do find them a bit warmer in the summer than some other gloves, but these do have a considerable amount more protection on the tops so that makes up for it I guess. If you don't mind having 'sexy hands' and want a nice thin palm then check out the SE's from Troy Lee Designs

Stuff Mike Rides part deux will most likely have an SDG I-Beam seat and post, Troy Lee D2 carbon helmet and MRP's carbon chainguide. Don't wait around as it may be awhile....

skitchin (Oct 19, 2007 at 19:24)
ive been riding those syncross mentals pedals for years also!!! ill never ride anything else again, nothing can compare to these things, they are alway grippy! no matter what! i highly recommend these pedals!! ( wear shinpads...or you better be a pretty tough player)

dhcyc (Oct 20, 2007 at 8:31)
I ride some similar in construction NorthShore legeaters pedals since about 3 years and they still do great! have never had to do any service, spinning and gripping well, defo tough and still have all the pins, not remains but the long ones. 3rd pair of shoes is now being finished...and I'm the lucky one cause I ordered these tld se gloves...waiting 4 em right now

thekonakid24 (Oct 20, 2007 at 16:19)
Hey, just a warning for ya, I bought the 661 Cedric Gracia signature gloves. They look tough and indestructible....GARBAGE. The seams are coming undone, I have one of my gloves almsot entirely held together with black electrical tape. I've loved all of my other 661 gear (helmets, armor, etc) but these gloves let me down big time. I'll have to get a pair of those TLD. Pop Wheelies...how cool is that?

billygoatsgruff (Oct 20, 2007 at 15:24)
I Don't think you can do better than DMR V12 magnesium for grippy pedals. Sometimes you want your foot to move around, sometimes you don't. 40quid from CRC

thekonakid24 (Oct 21, 2007 at 19:22)
Purdy. How does their inner-chain guide work exactly? What keeps the chain in the space between the guide and the bash gaurd? Just tension?