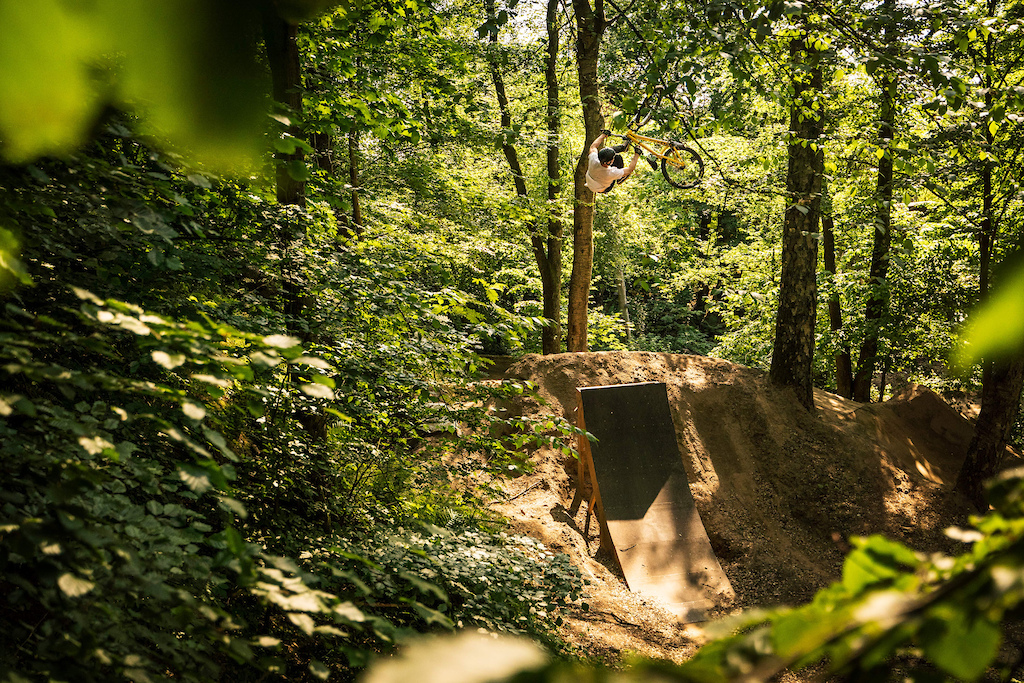 Felix Törnqvist airing it out while filming for Red Bull's Swede Shreds. Photo: Hanna Jonsson / Red Bull
Kallebäcksdirten is a well-known dirt jump spot in Gothenburg, Sweden, and perhaps its greatest claim to fame is it's the place where Emil Johansson spent his weekends as a teenager working to become the slopestyle rider he is today. Now, Gothenburg City has made the decision to demolish the jumps with no known plans for how the land will otherwise be used.

Mountain bikers in Sweden and beyond have protested the demolition and have started a petition, especially as there are few dirt jump spots in Sweden and this change will dismantle an entire community built around the park. "Almost every weekend, all year round, a bunch of bikers gather here with an age range between 5 - 50 years to shred together and learn from each other," the petition organizers wrote.

The petition has collected 2,346 signatures at the time of this writing and is available here.

G-Sport (Nov 16, 2021 at 10:58)
FFS. When are councils going to start realising that all the crap they spout about encouraging healthy recreation is a waste of time if they turn around and demolish these amazing assets. Off to sign the petition.

Upat1intheMorning (Nov 16, 2021 at 12:52)
@HB208: Or thousands of dollars into a pumptrack that gets fenced off for no flyouts and has a bunch of tiny kids ride around, crashing into each other and the ground and then parents and councils yelling at the "grown" bikers that they're being dangerous and inconsiderate in its use. *True story*

Lineofbestfit (Nov 16, 2021 at 20:34)
@Upat1intheMorning: My city even has both a "large" pump track and a "kids" pumptrack, but parents don't bother taking Jr. to the appropriate one because it's 100 meters further from the parking lot.

motts (Nov 17, 2021 at 7:40)
@Lineofbestfit: Maybe they can put a small gap into the pump track?
Our city bike park gets a bit overrun by kids, but the intermediate and advanced lines have small gaps off the roll-in as a strainer and boulders on top of the table tops. Keeps out the kids and the people who aren't ready to gap a jump.

Upat1intheMorning (Nov 17, 2021 at 7:45)
@motts: Thats actually quite a good idea, kind of like a set of dirt jumps with gaps... community councils smh... Is it a dirt or asphalt pumptrack?

Upat1intheMorning (Nov 17, 2021 at 8:47)
@HB208: Yo that park looks fun though! Thats a rad set up with variety. Totally see your point on the pump track and whatnot and man oh man I can only imagine how many kids stand on those lands of the jumps.

feeblesmith (Nov 16, 2021 at 11:59)
I used to dig jumps there 20 years ago and the spot had been used for simmilar purposes by local kids as long as anyone could remember even back then. I guess the use of wood puts it in some kind of building permit territory and pencil pushers have to pencil push.

SimEd4 (Nov 16, 2021 at 11:14)
Thanks for signing and don’t forget to validate your signature in the link that will be sent via email (keep an eye on your spam folder).

G-Sport (Nov 17, 2021 at 4:53)
@aljoburr: Oh, and proving you aren't a robot means googling what you are supposed to be identifying in the photos, chimneys for me.

aljoburr (Nov 17, 2021 at 6:22)
@G-Sport: So robots cant use google?
I would have thought since it is computer controlled, they would have no problem with other languages!

Jolinwood (Nov 16, 2021 at 23:04)
For fucks sake, kids of Gothenburg should sell drugs and join the gang wars. Have this playground demolished already.

haighd2 (Nov 17, 2021 at 2:39)
This narrative needs to stop, its such a bad argument.
A) Adults ride bikes too
B) Bike riders are disproportionately middle class
C) Sports facilities do not need to justify their existence through appeals to social justice. Do you see planning applications for golf clubs stating “If these men don’t have a space to swing their golf bats around they might become football hooligans”? Of course not because it makes it seem that your providing facilities for dickheads.

The argument should be the people that have built this are good people, they are sorry for having taken over someone’s land but they deserve the opportunity to show they can run it properly. This is the approach we took at Brockham Trails and it worked.

Jo-rides (Nov 16, 2021 at 12:02)
Cities need people with a plan. Insurances? Security? Development plan? Funding? Who's responsible? Sorry but a bunch of friends building stuff with a sense of community won't be enough. If you really care, organize yourself and plan ahead, that's your best chance

gatesaver (Nov 17, 2021 at 7:53)
It's been around for 40 years, it has been surveyed and passed many times by the Parks & Nature division, but now all of a sudden they want to f*ck us again, they made plans into motion to f*ck all mtb users in our area by making the biggest trail system offline for us during the winter but not for horse f*ckers. Those who build at Kallebäck are very down to earth and humble, the guy who mainly builds is @felix_tornqvist and he could be out competing in the FMB Tour or Crankworx but he instead chooses to spend his free time slaving away at the dirt jumps.

Bourdeau (Nov 17, 2021 at 3:22)
Saw there was a dirt jump spot in Pennsylvania US that ended up getting insurance and a web page to maintain the trails. It has the ability to donate to help with the insurance costs and tools. Good luck and hope they stick around.

EmilioGC (Nov 18, 2021 at 4:27)
Signed and confirmed. I have a good friend in Gothemburg who I guess learnt jumping in this park. And trust me, he learnt well. More spaces like this to teach our kids to enjoy cycling and the value of sports. Cheers to the Swedish bike community

mlangestrom (Nov 19, 2021 at 6:55)
UPDATE: The demolition has been paused/postponed/cancelled for now. It seems Parks And Nature wants to find a solution

houttemanj (Nov 17, 2021 at 6:34)
The exact same thing happened where I live, the town demolished an existing dirt jump spot. They did add a paved pump track as a consolation prize but it still isn't the same. Was sad to see it torn down.