Bettmümpfeli - Crans Montana is one of the biggest ski resorts in Switzerland; a country known for skiing. The area is actually a tourism region built around the two regions of Crans and Montana. While known mostly for skiing Crans Montana actually has a decent size bikepark and, as many other Swiss regions, many hiking trails accessible by lifts and bikes. Located on the north side of the Valaisian Rhone east-west valley the bike park and many of the trails have southern exposure and consequently open for biking fairly early in the season (the bikepark opens in late-May). It's a huge area boasting "117 km of marked pistes, two downhill runs and the Kona- Bikepark" (per Tourism Switzerland)

The two villages are located at 1500m far above Sierre at 533m at valley bottom. There are buses which take you to the Crans Montana resort but of course there is also a funicular railway taking pedestrians and bikes to the top. Unlike our previous destinations of Val d'Anniviers and Val d'Herens, Crans Montana is more touristy. In itself, this is not necessarily bad but come here expecting a more packaged experience as opposed to a choose-your-own-adventure type of undertaking.

On our first day here our weather luck is not for the best. The rain and low temperatures scrapped plans for us to do a ride to the valley. Instead we tried to time a weather window and sample the trails of the bike park. As of summer 2014 there are three trails, each between 5-7km long. We took the 6 km long Mont-Lachaux track which is a flowy, bermy trail with optional easy lines for beginner/intermediates. Unfortunately by the time we got to the top our weather window was gone, it started to rain HARD so we just booked it out of there after giving our Alpine-Trails bikes a good thorough mud-bath. What we saw of this bike park was encouraging. Views were splendid. Even though it was late in the season brake bumps were not too bad and the trails were in pretty decent shape. There was not the half-hearted genericness which we've seen in so many Euro bike parks and instead, dare I say, there was even some flow. You can also see some excellent photos by Alex Boyce who got a weather window earlier in the morning here.

Top of the trail 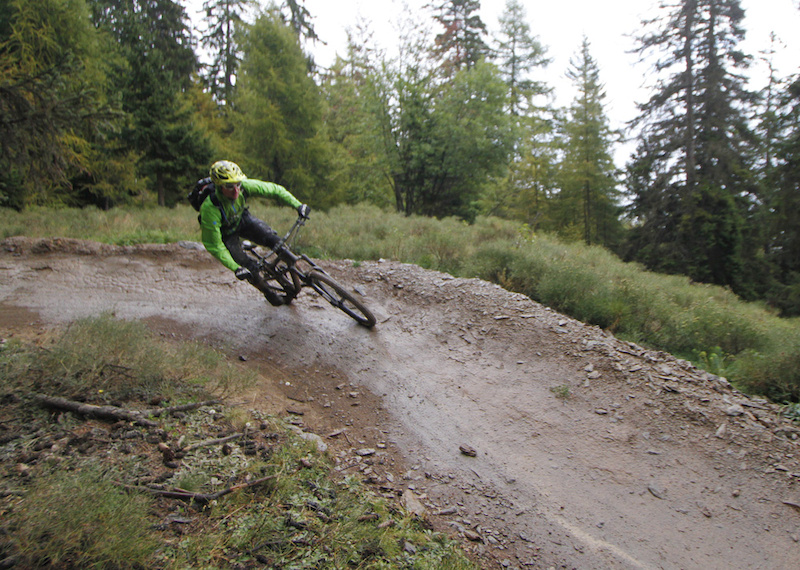 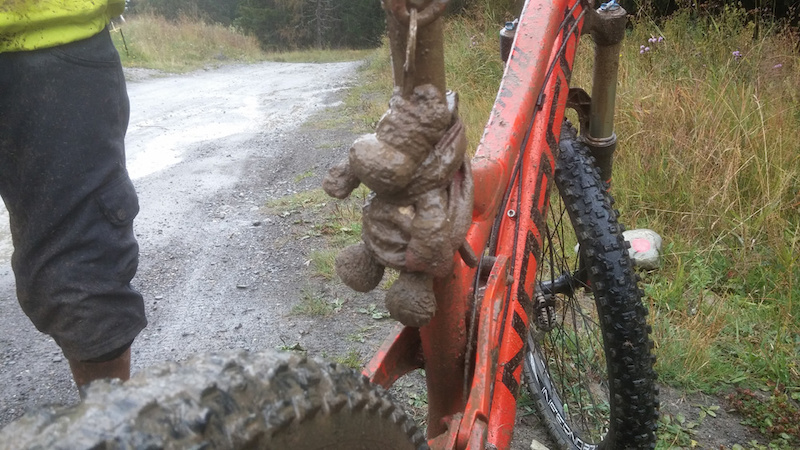 The next day the skies were blue, the air crisp. We decided to attempt the ride from the Plaine Morte Glacier to Sion.  Plain Morte is a glacier located at about 2750m (it keeps receding so this height keeps changing). In winter it's accessible by gondola and cable car but in summer all one gets is a gondola assist followed by a long bike ride with some hike-a-bike on ski-hill access roads. We took a chance to see how much snow there would be. Our first clue that this ride might be challenging was on the 700m gondola ride from Montana to Cabane des Violette at 2200m. The mountains not far above us were already pasted white. 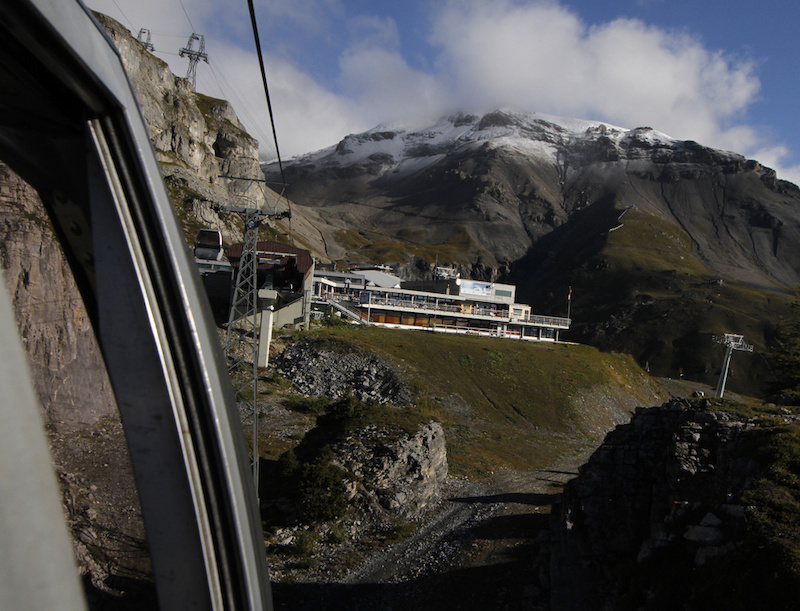 The Gondola to Cabanes des Violettes 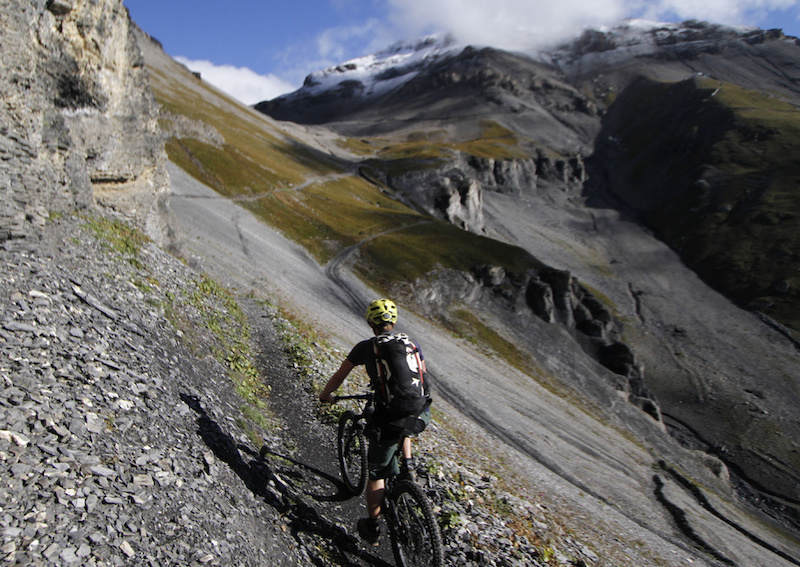 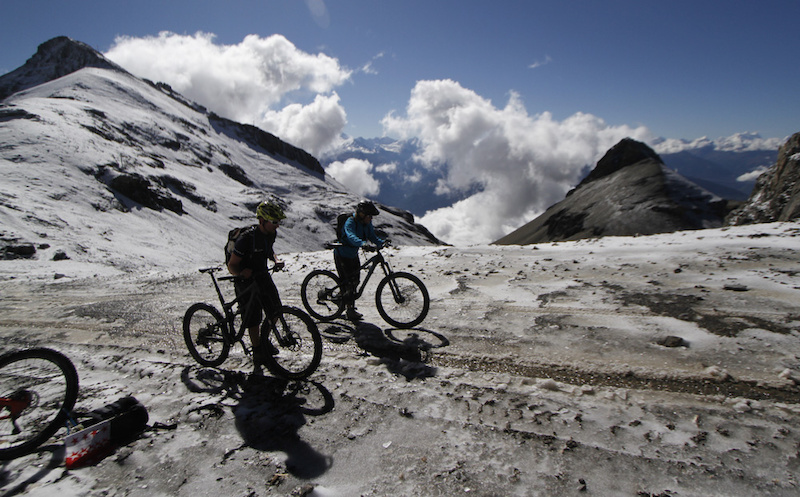 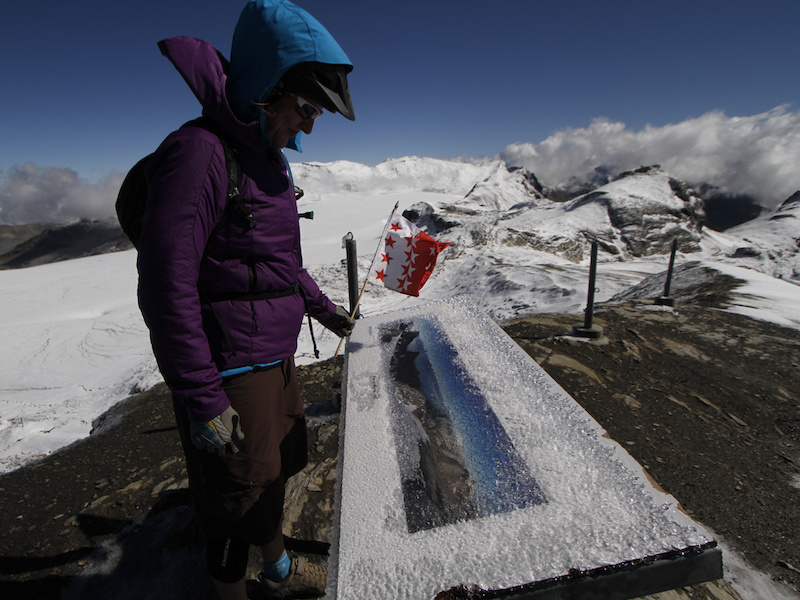 2927m, BRRRRR. We decided here to not go further as it was pretty icy


After arriving at the top of the Funitel gondola and peering into the windows of the luxurious 2900m elevation restaurant (closed as it was late in the season) things looked spicy. There was certainly enough snow to make the high alpine rocks icy and sketchy thus dashing my dreams of riding what has been described as "the longest single trail of Switzerland". We pressed on a little further past the Funitel so we could look down on to the glacier. It would have been quite the sketchy traverse in bike shoes and with little margin for error the decision was made to turn back.


This was filmed on the Plain Morte to Sion descent. Hope we get to do this one day. 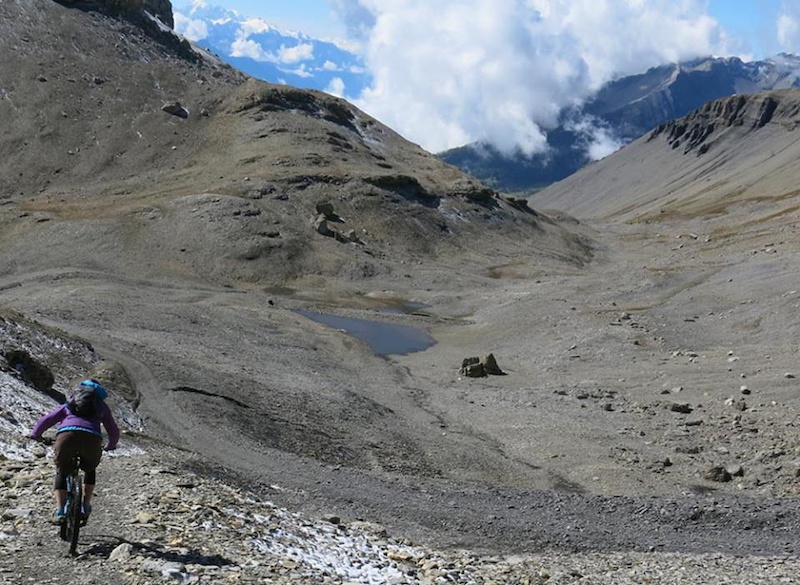 So we head down 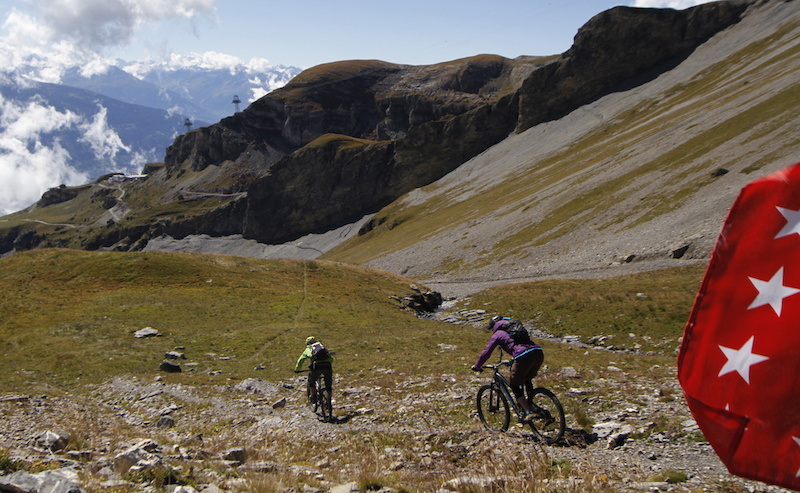 To the sub alpine we go 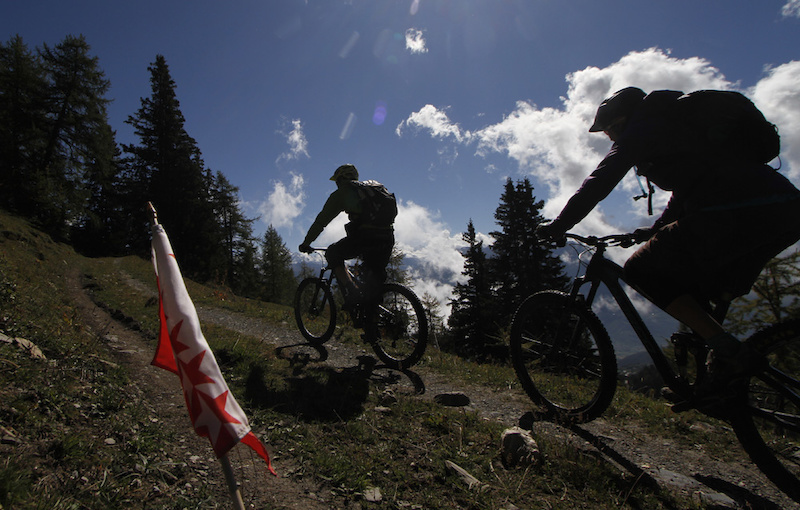 A lot of elevation drop - a different world


After losing substantial elevation very quickly we were back down at treeline. It was still cold but snow was absent. Unfortunately our route meandered through some lower forest trails which unfortunately had gotten the double whammy of getting wet then getting hit by cows so we got to practise saying chue scheisse, chue flade, merde de vache, merda de la muca. All was not lost though as we got to check out some classic Valaisian culture at the Cave du Sex and ambled by some of the fabled fighting Valaisan cows fortunately without getting into any fights. This route ended up descending some exceptionally scenic and gorgeous singletrack to the town of Salgesch where we found a nice car wash to clean muck of our bikes before the road ride back to Sierre and the funicular back up to Montana. 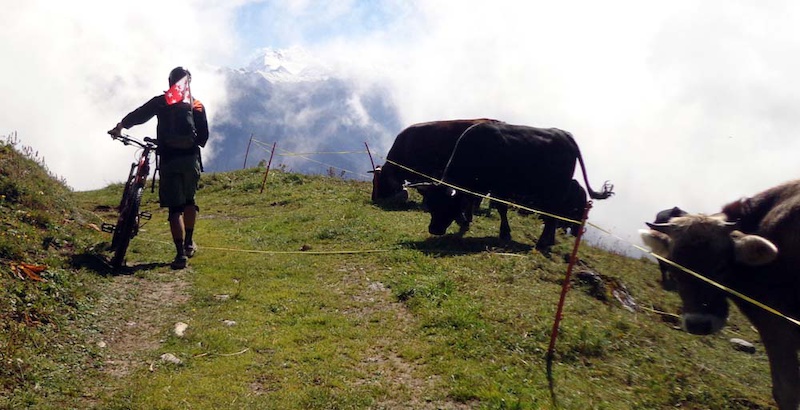 We go through some muddy cow pastures, the rains the day before sure didn't help 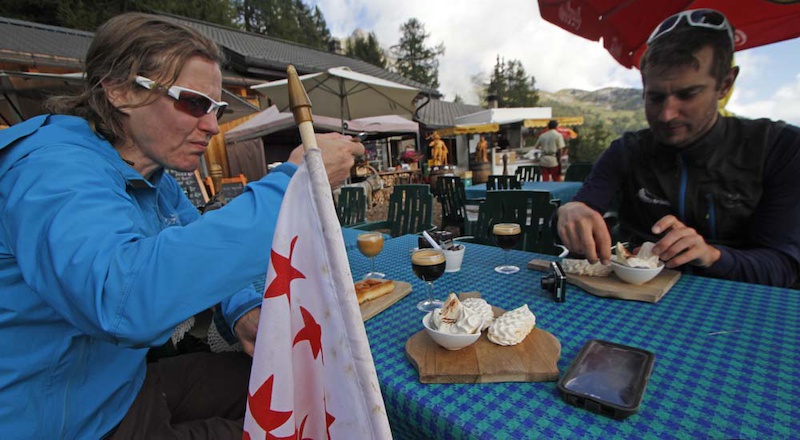 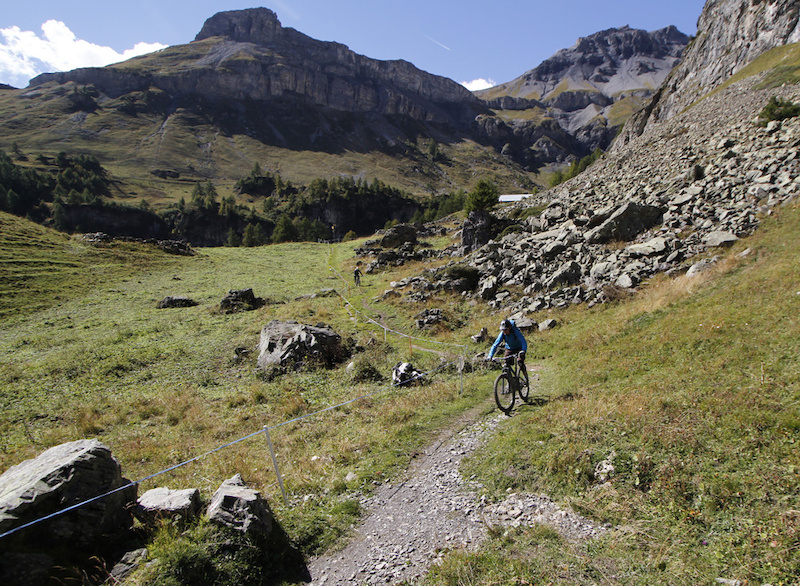 Then we head down to the forest trails 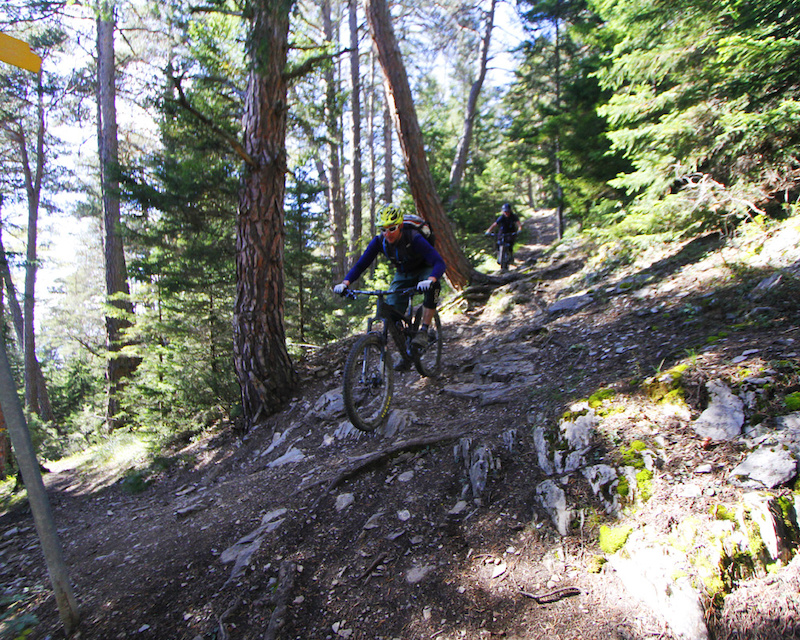 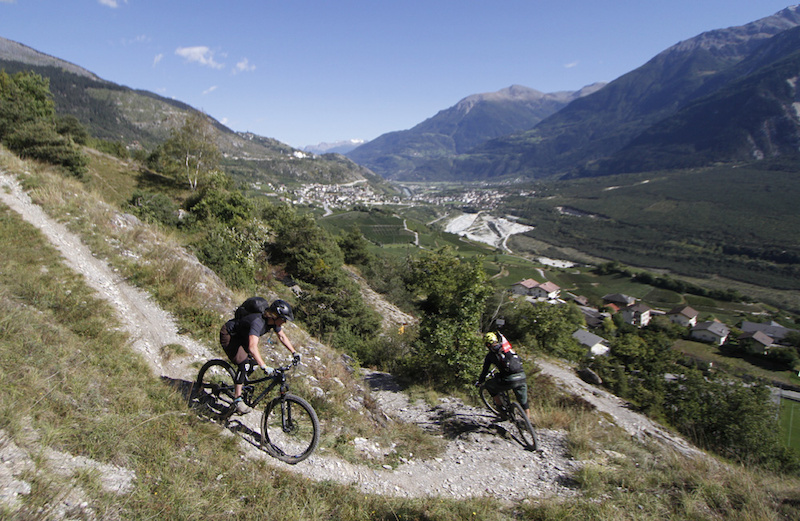 We stayed at the Hotel Olympic. Check out the Tripadvisor reviews here. On balance we wouldn't recommend staying here. Although it was a convenient location close to amenities in Montana, staff were indifferent at best and not at all helpful either at checkout or during dinners. 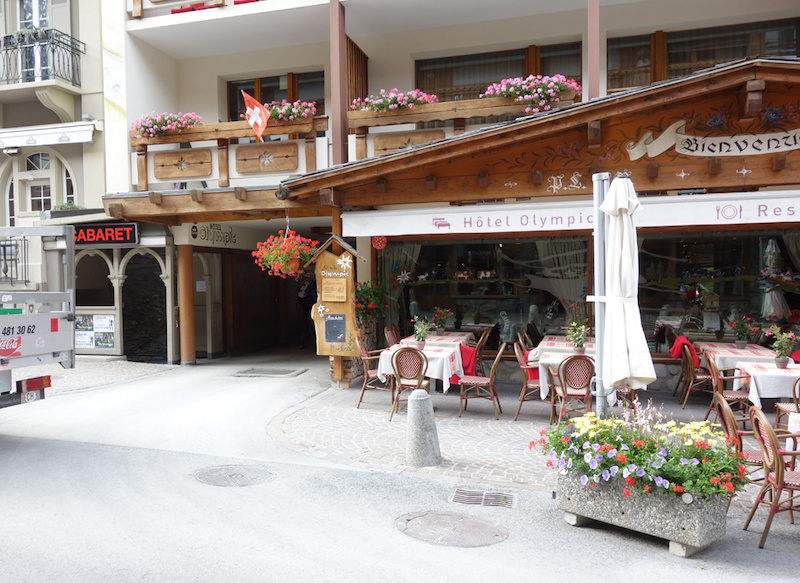 Nice location on the main street. Quiet but then it was not the busy season 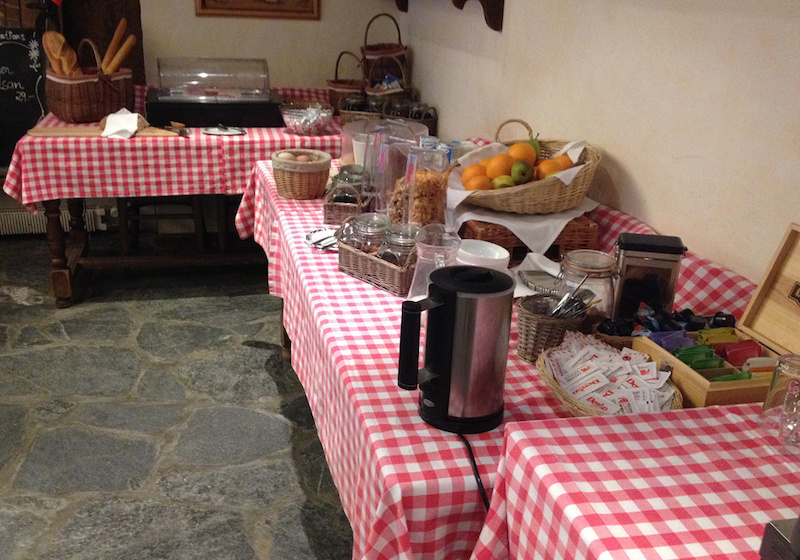 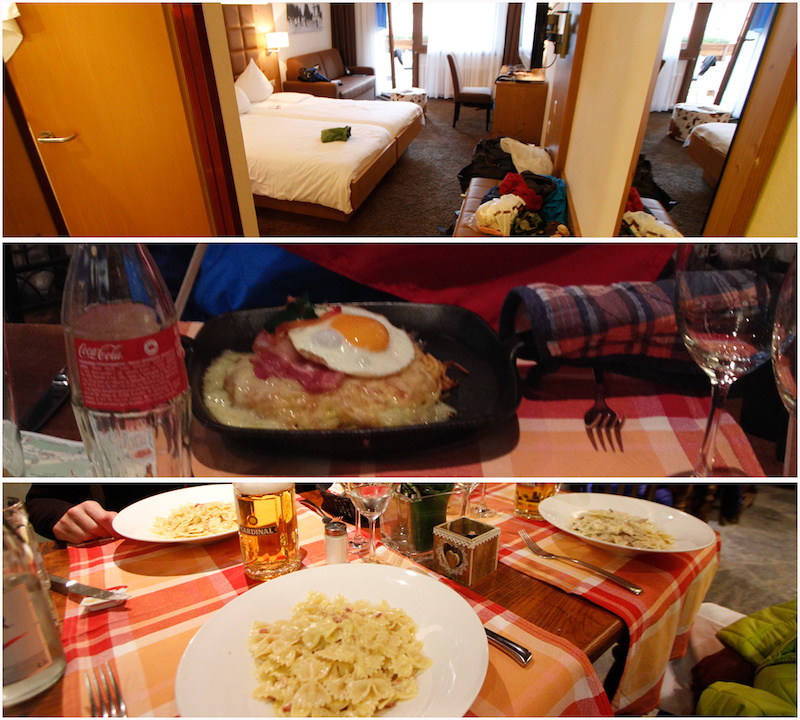 Nice rooms. We had the half board meals which were ok. It seemed to us like it was a chore for the waitress to serve us though

UncleGroOve (Apr 5, 2015 at 2:51)
Plan B for those *rainy* days (or after that strenuous day in the saddle)...
Head out to Leukerbad (Loche-les-Bains) and buy yourself tickets to the local thermal hot-water baths.
Thereafter head into the center of the village and have some seriously good cheese fondue
:-))
www.myswitzerland.com/en-ch/leukerbad.html

survivor (Apr 6, 2015 at 14:08)
One of the bike park tracks mentioned is an IXS track and one of the best I've ridden. So fast and littered with rock and well built features. Amazing. We had a get day there and were gutted come lift closing time.

Sshredder (Apr 5, 2015 at 10:26)
How could a server be rude to Canadians? Are there bike friendly hostels for the cheap tourist like me?

boxxerace (Apr 6, 2015 at 16:46)
Yes (in general). There are uber amounts of yurts, cabins and mountain chalet's that are pretty affordable and require riding your bike or hiking to. Some don't even have running water, electricity and have food delivered by donkey. Check that off your bucket list

leelau (Apr 7, 2015 at 8:50)
To be fair the server and front desk lady were rude to the Singaporeans and the local guys from Visp so it wasn't personal. Maybe just a bad weekend for them and cranky

Sshredder (Apr 7, 2015 at 9:04)
Sometimes peeps are just having a bad day. I have to deal with clients every day. I try to keep my personal feelings at home and put on a happy face.

when i was biking mostly, switzerland is beautiful place for mountainbiking.