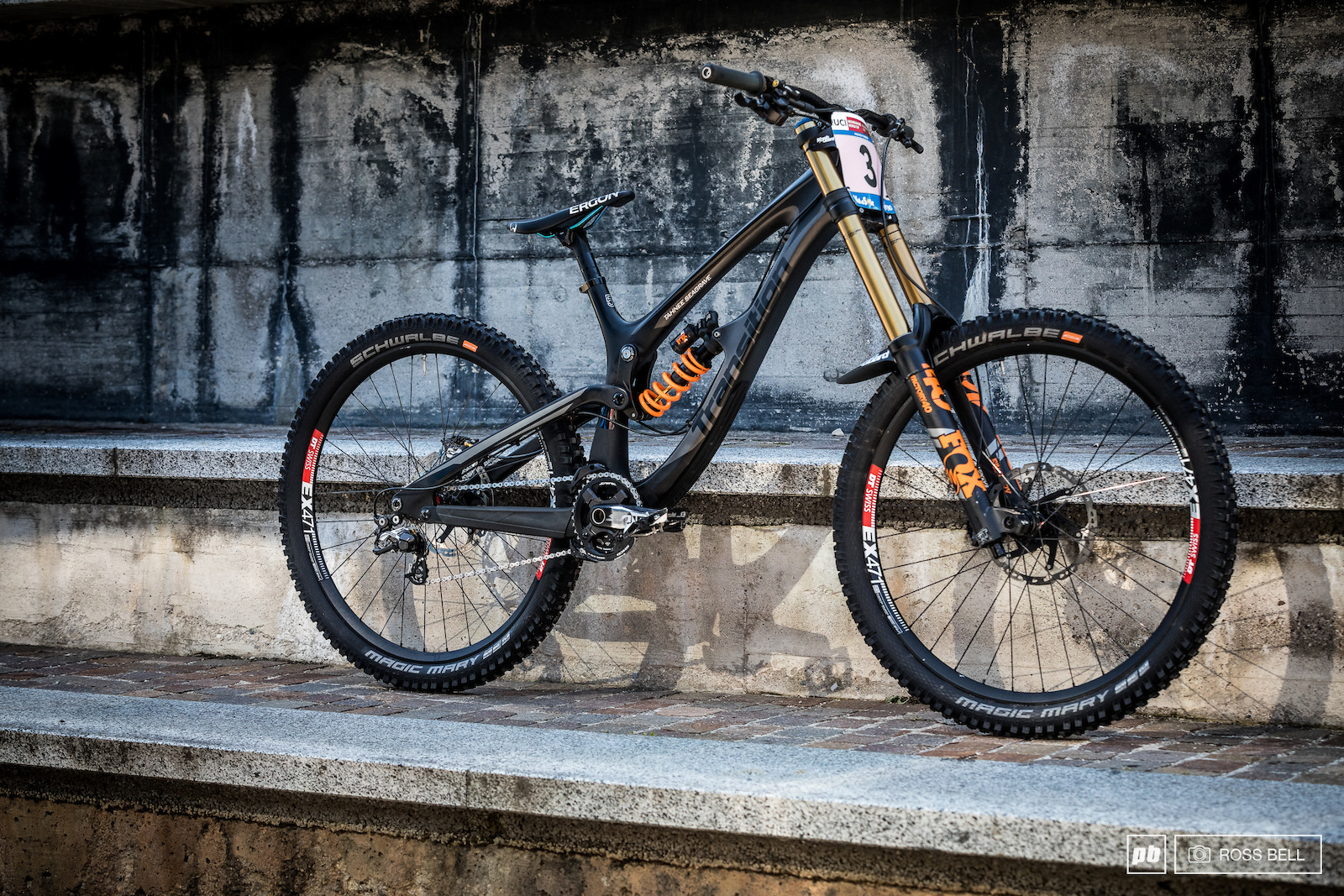 A carbon downhill bike from Transition? The Internet went nuts for a few days, earlier this season when photos of Tahnée Seagrave piloting the new TR Eleven made their rounds. Her wins aboard the bike didn't hurt either. For its part, Transition officially launched the TR Eleven a few weeks back. Photographer Ross Bell caught up with mechanic Matt Allingham and got the skinny on the new bike—there’s a lot more going on here than a mere swap in frame materials. 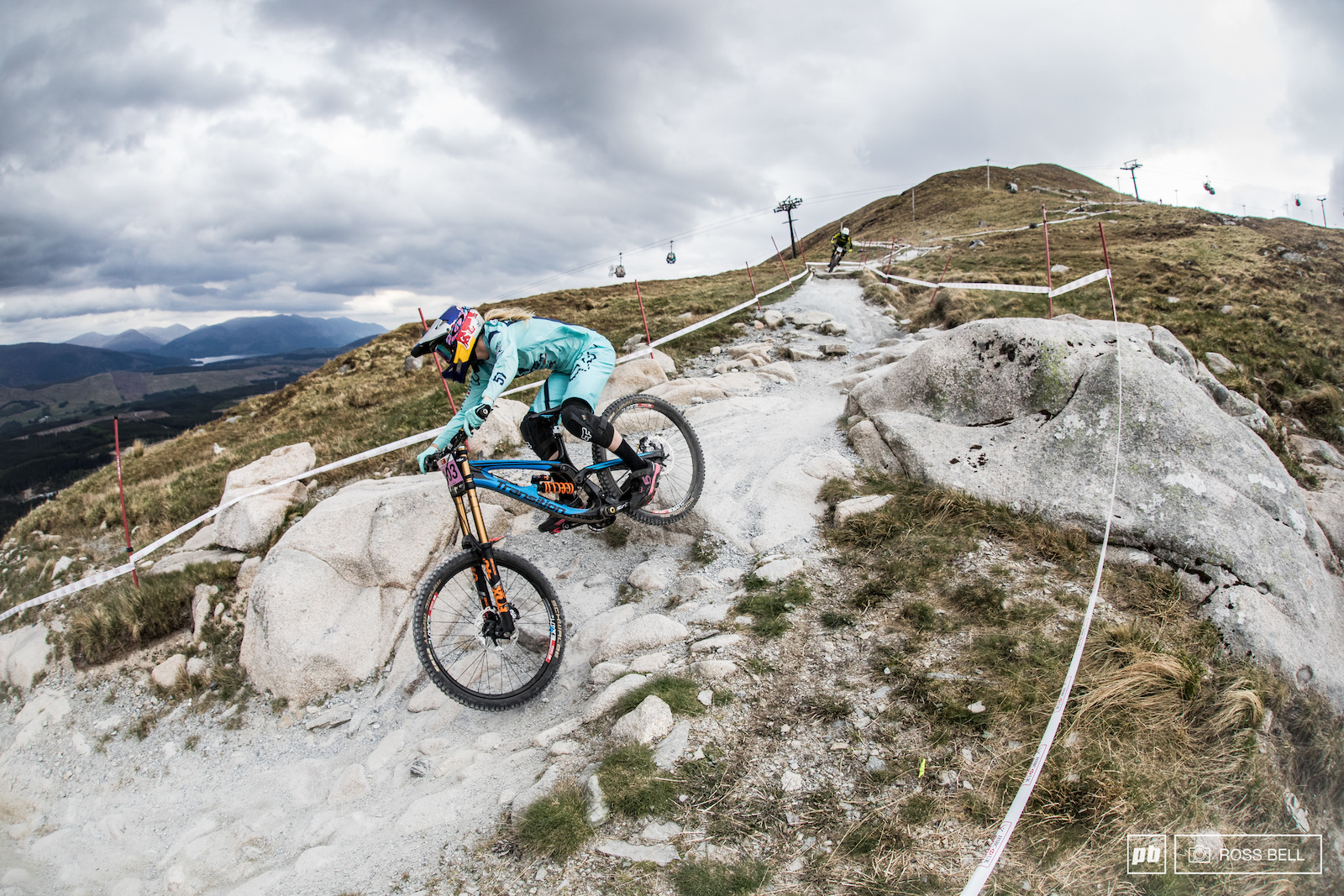 Seagrave piloting the TR Eleven at its debut at the Fort William round of the British Downhill Series.

So, Tahnée has been on this frame since Fort William round of the British Downhill Series, right?

It’s exactly the same frame. We had two sent over. Despite what’s been written in some places, it was actually a full production frame, just from the very first batch of them. so Yeah, we were lucky to get them quite early in the World Cup season. We did a week’s worth of testing before the Fort William BDS, just to get it all dialed in, but we were already comfortable with the bike since we’d already been testing it last summer. It’s an amazing bike. We’re all so stoked to have it.

How heavily involved was Tahnée with the development of the bike?

There was a lot of feedback given. We did a week of testing on the bike last year, in Canada and we ironed out some issues. Transition was really good at getting the production bike sorted out as quickly as they could. 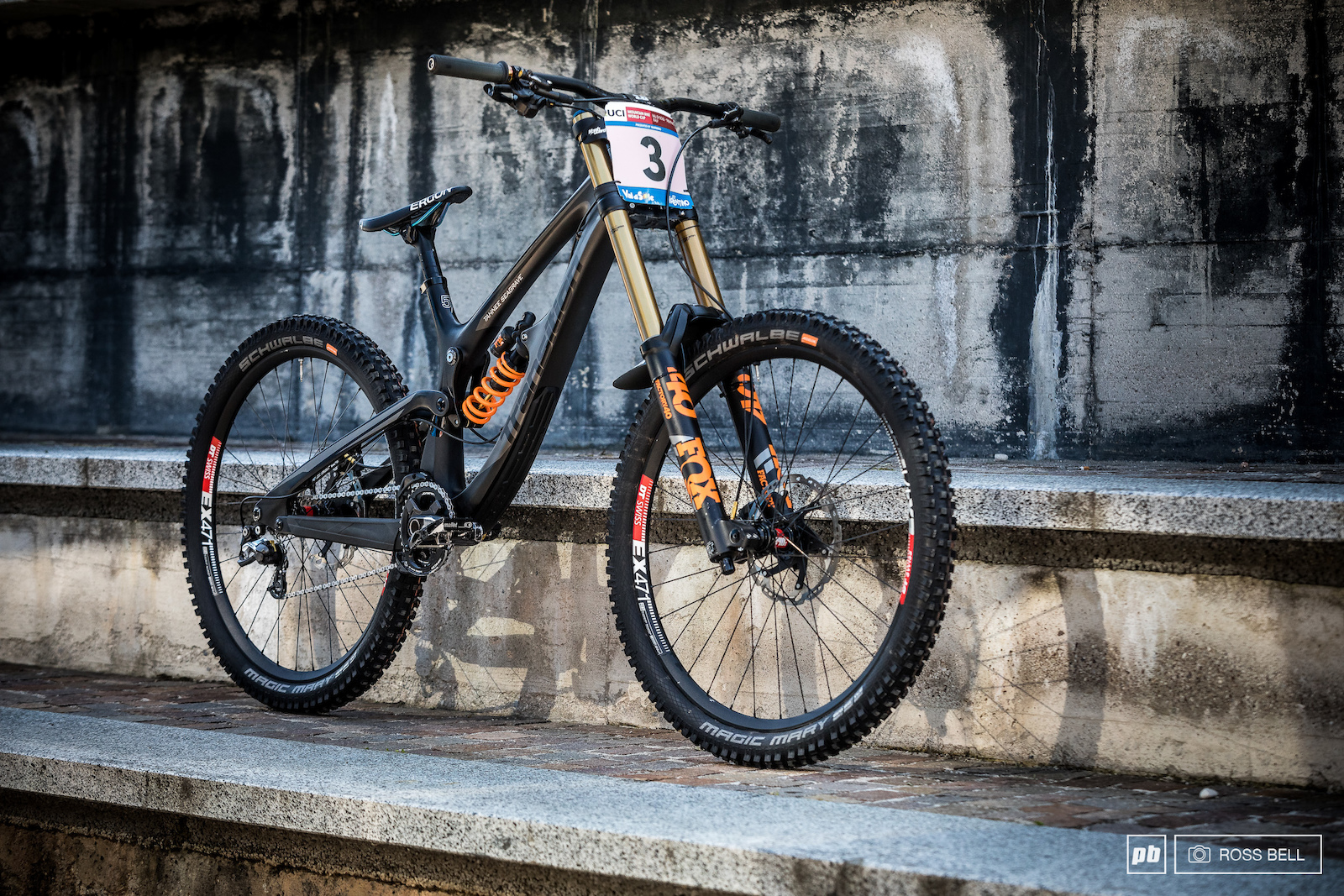 What's different? A lot. There's the GiddyUp (aka, Horst Link) suspension system. And then there's the weight, or lack thereof. The TR Eleven is a solid 2 kilos (4.4 pounds) lighter than the TR500 it replaces.

What are the key differences between this bike and the old TR500 that it replaces?

Well, the carbon fiber, for starters. There’s a massive difference in the weight of the bikes. We calculated—using roughly the same components as last year—and the new bike is almost 2 kilos (4.4 pounds) lighter. It’s just a massive difference, really. It's not just the swap in frame materials. The paint on the TR500 was also one of the factors, whereas this is a raw frame.

Then there’s the Horst linkage or GiddyUp linkage as Transition likes to call it—it tracks the ground amazingly well. It’s just such an efficient bike to ride. It also has a more modern geometry with a longer reach as well. Tahnée is running a Small frame, but the reach is quite a bit longer than on last year’s bike, so this Small is actually a little bit longer than last year’s Medium. We considered experimenting with a Medium frame for Tahnée, but the races are so tightly packed this year that we decided to just stick with something that is closer to what she was comfortable on last season. We’ll probably give the Mediums a bit of a test during this coming off season. 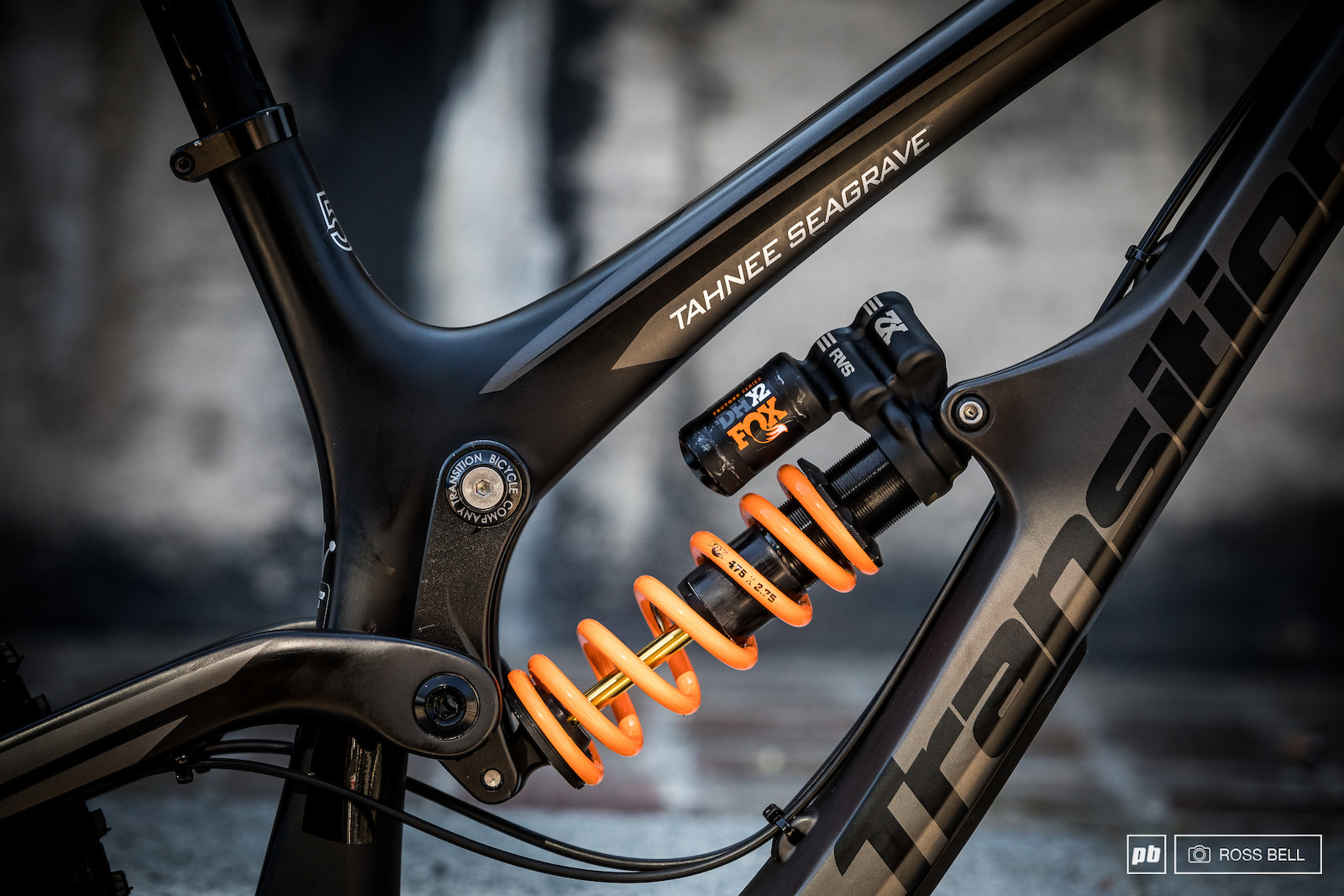 In terms of the suspension kinematics, how does it differ from the TR500?

It is a very progressive design now. A coil shock works really well on this bike. You don’t need to run an air shock with bands in it to get proper ramping.

So was Tahnée on an air-sprung shock on the old bike?

Nope, she never tried it. The TR500 was fairly progressive as well, so there was no need to try an air shock on that bike either. 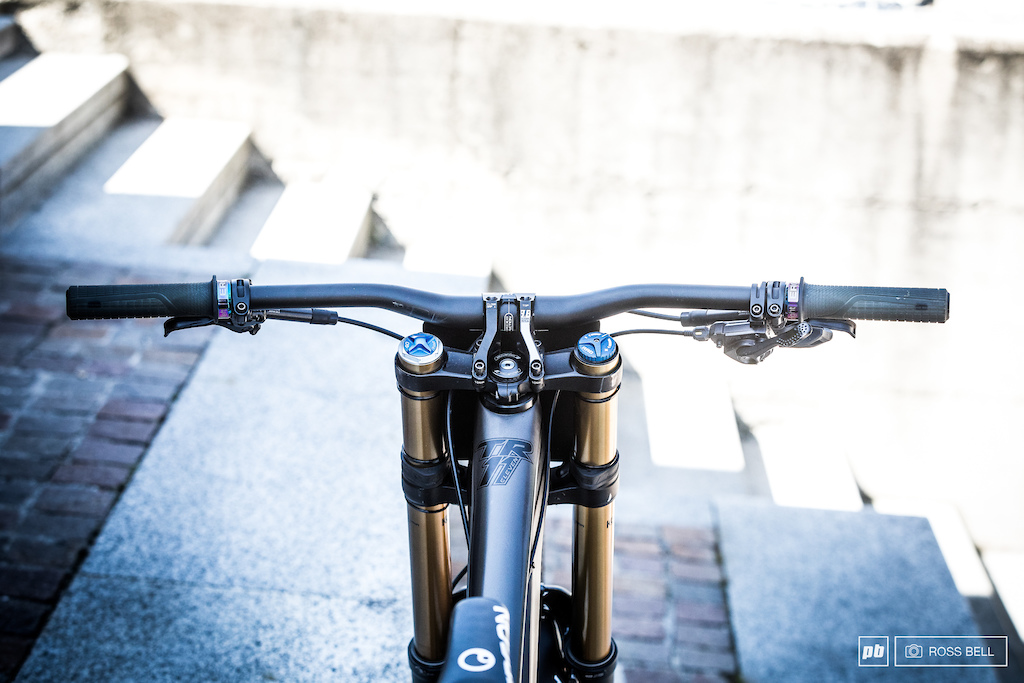 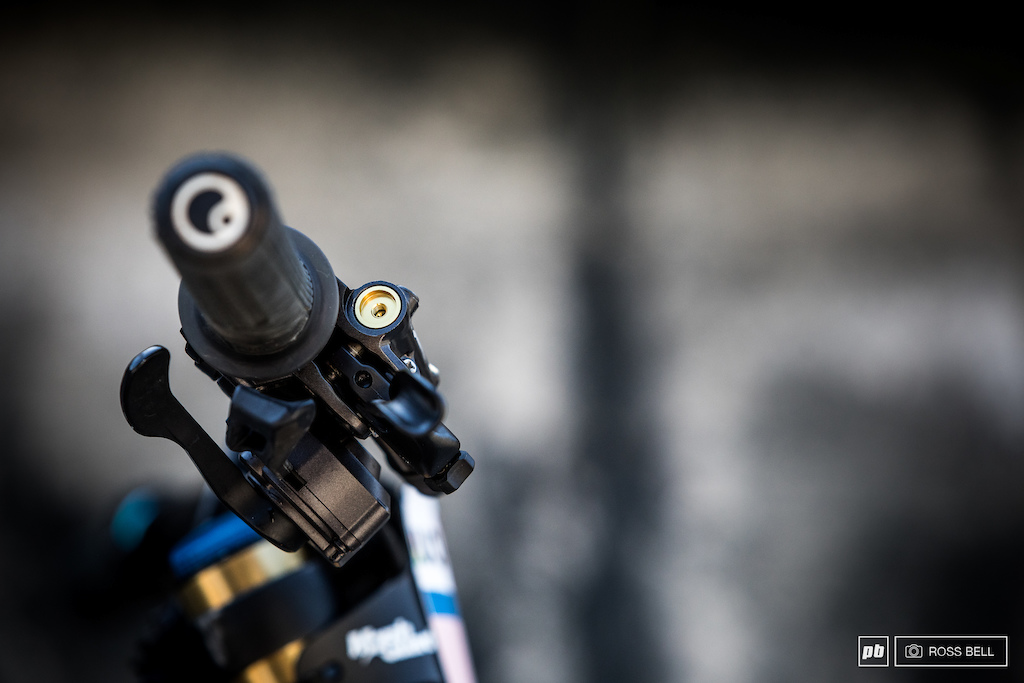 We’ve messed around with the angles of the levers a bit, but we pretty much get the settings dialed in at the beginning of the season and then just replicate it if we need to swap frames at some point. 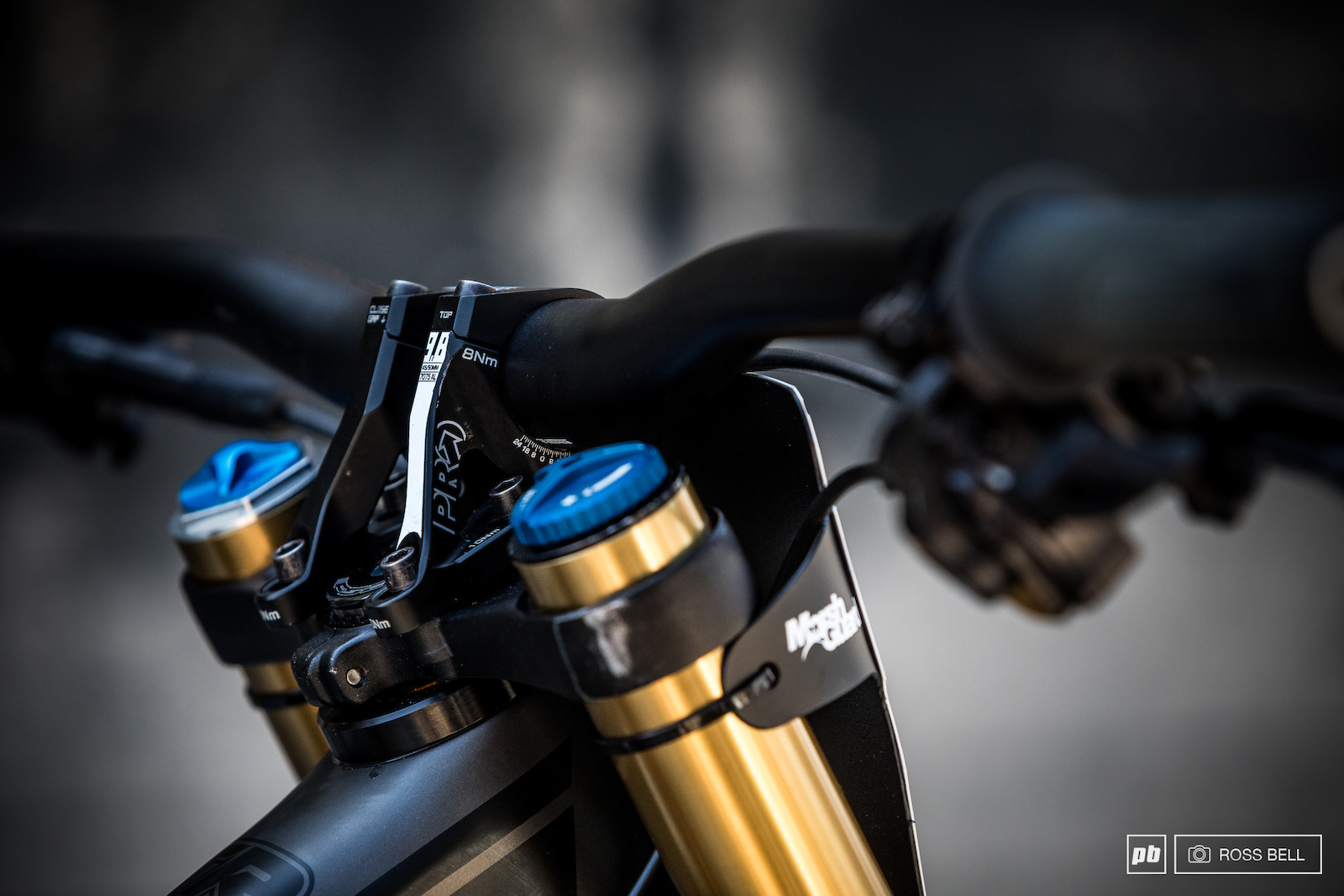 Val di Sole's unforgiving terrain will lead some riders to mess about with the height of their front ends. Seagrave, on the other hand, pretty much slams the stem and keeps it there all season. And yes, the Fox 40 gets a RAD damper.

Does Tahnée play around with stack height at all?

No. It’s pretty much always slammed. Tahnée pretty much just gets on with it and doesn’t change her set up much from track to track. She’s pretty comfortable with her settings and then just adapts her riding and her style to whatever track she’s on.

Anything unique going on with the components?

We modified the cassette a bit and went 8 speed. But other than that, the components are all pretty much stock—stock DT Swiss hubs, stock rims, stock Shimano Saint… the Fox forks are on the RAD program, so we have the RAD damper on that, and then some really cool, one-off Ergon kit. 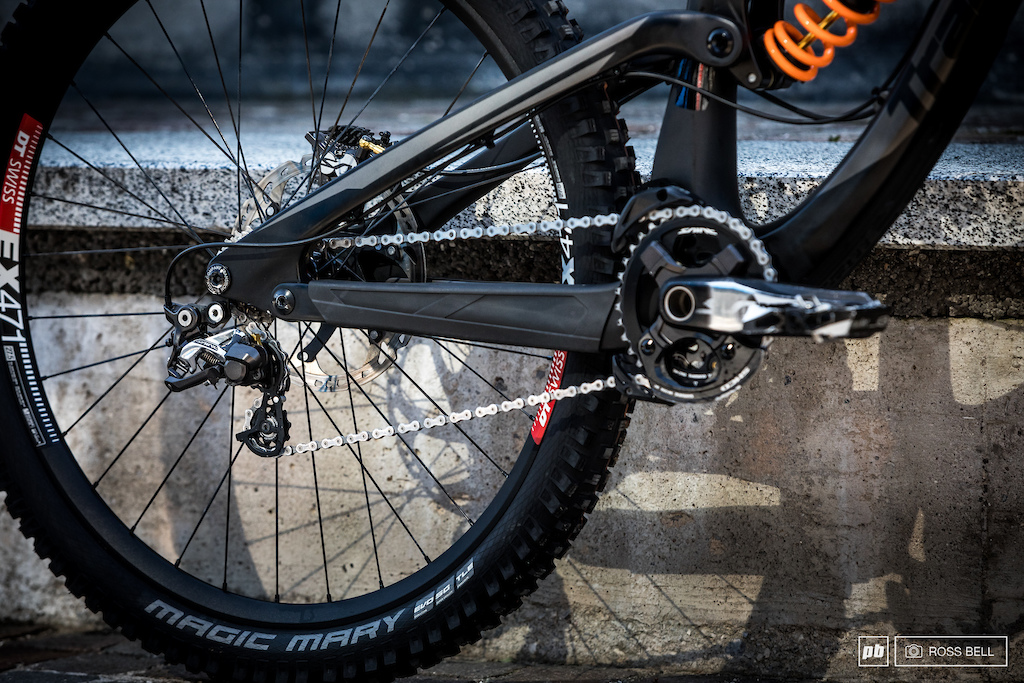 In terms of set up, how fussy is Tahnée?

She’s not very, but she knows what she wants. Tahnee is really easy to work with. If something isn’t right, you’ll know about it. A change is made and what’s done is done. There’s not a whole lot of puzzling going on. The changes get made quickly and then she just goes out there and gets on with the job. 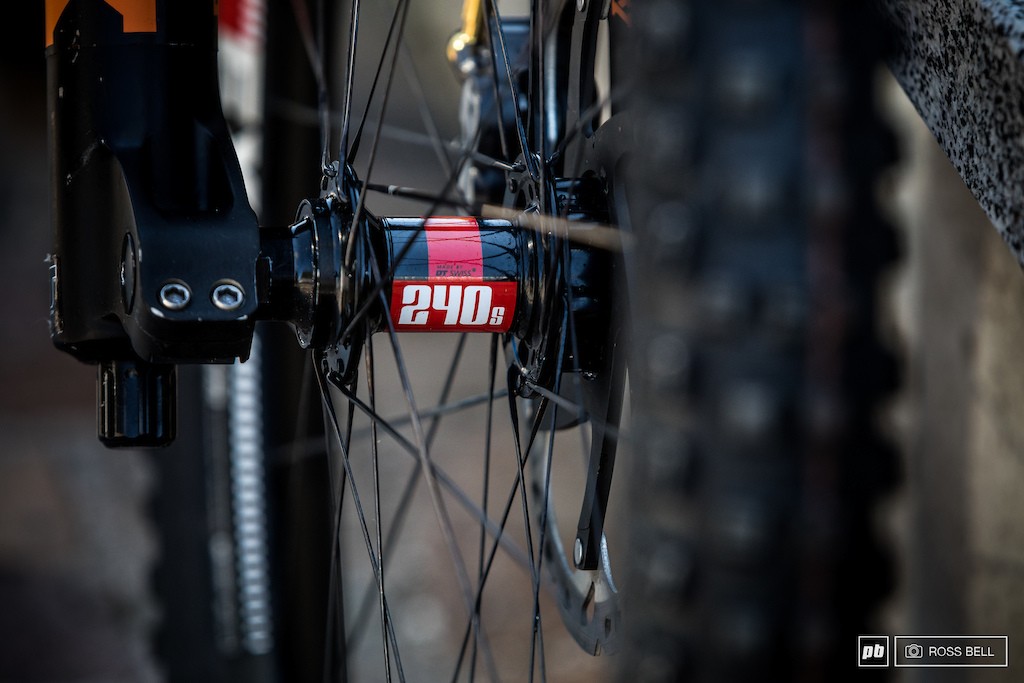 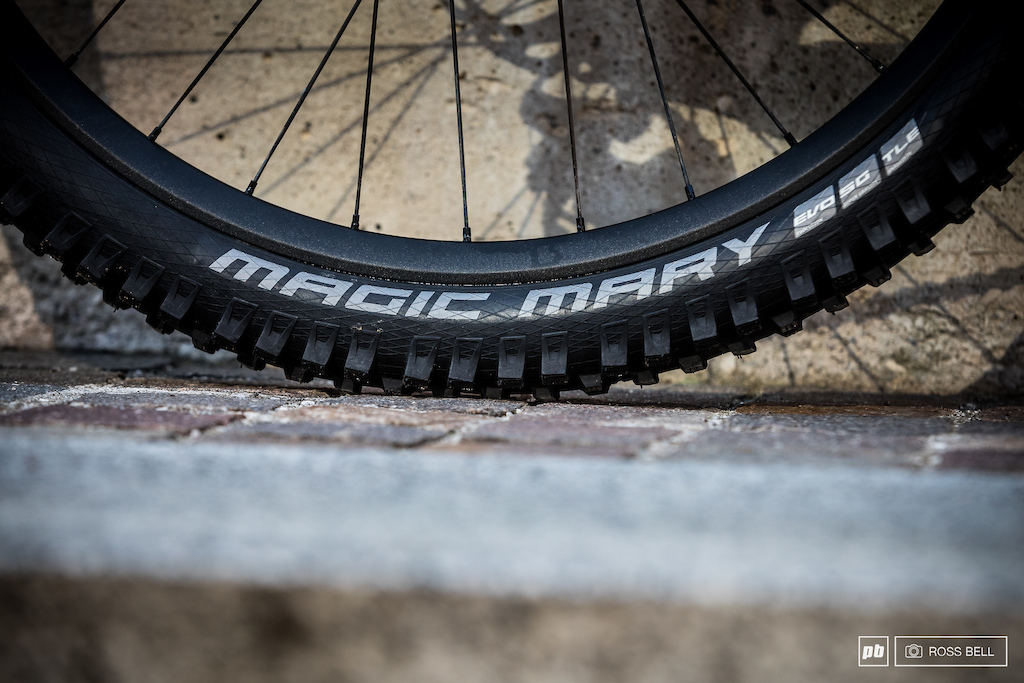 Tahnee's TR Eleven rolls on a tried-and-true combo: DT Swiss 240s hubs mated to the company's EX471 rims. While DT Swiss positioned that 475-gram rim as more of a hard-hitting enduro offering, it's proven a mainstay in the World Cup pits. Magic Mary's round out the rubber end of the equation. 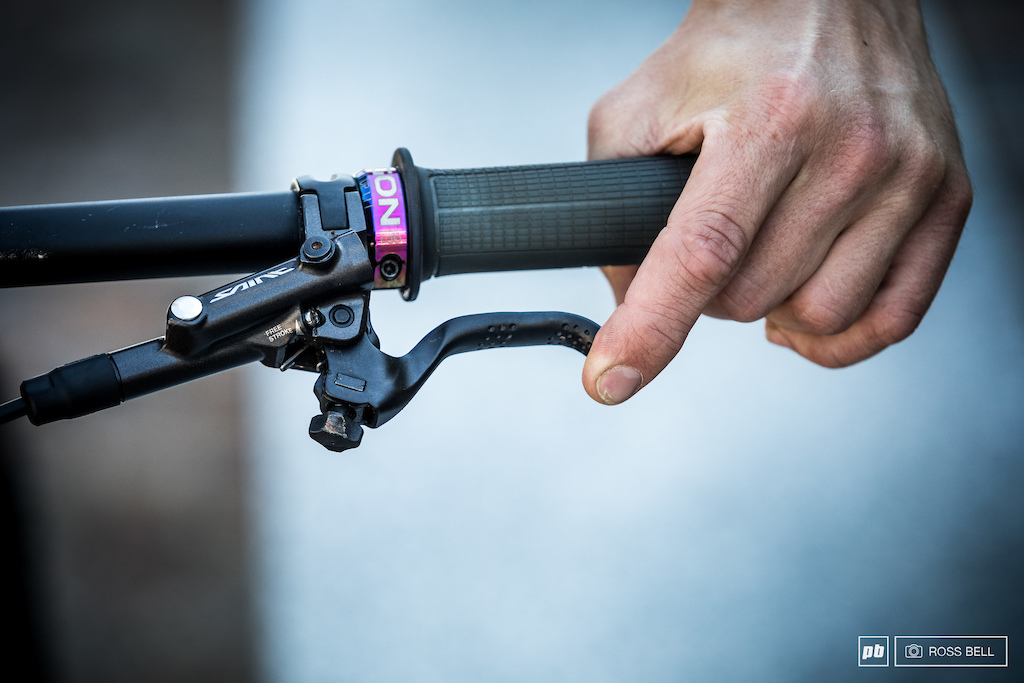 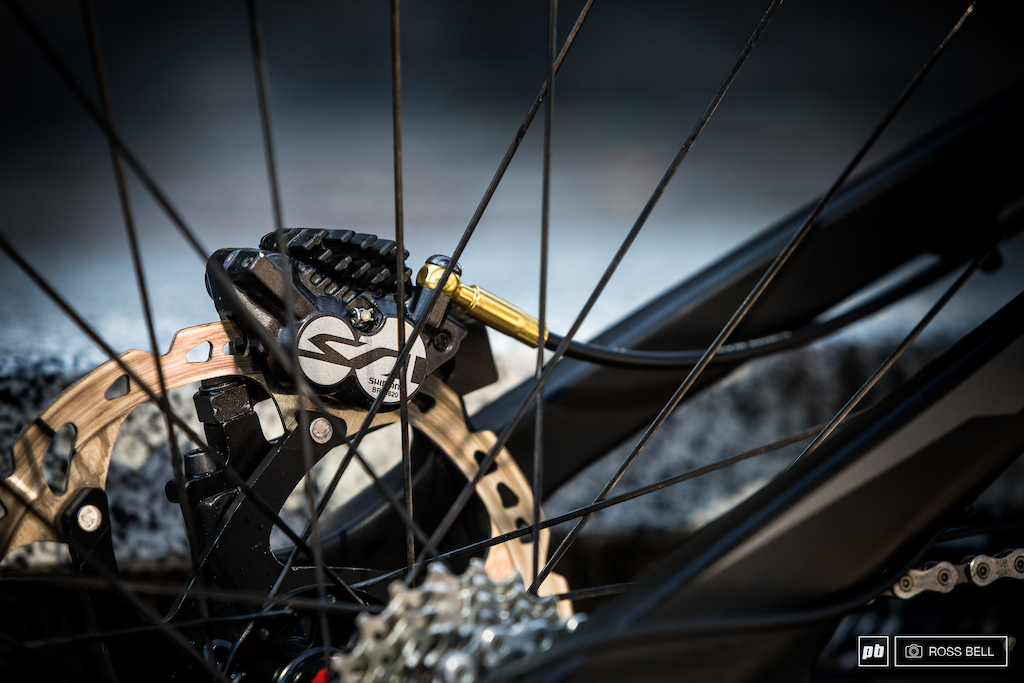 dvbwn (Aug 24, 2017 at 20:02)
I ride a Transition trail bike, but have never considered them for a future dh rig. This bike definitely changed that for me.

It is a very progressive design now. A coil shock works really well on this bike. You don’t need to run an air shock with bands in it to get proper ramping.

So was Tahnée on an air-sprung shock on the old bike?

Nope, she never tried it. The TR500 was fairly progressive as well, so there was no need to try an air shock on that bike either.'

pedrosalas7 (Aug 24, 2017 at 16:16)
Very progressive vs fairly progressive, I did let out a chuckle reading that though.

Motoracer31 (Aug 24, 2017 at 21:58)
I don't think there could have been a worse 2 questions in an interview. She likely didn't try it cause transition said the x2 doesn't fit the 500. You can modify the linkage to make it fit in the longer travel setting. But that's bad marketing

twozerosix (Aug 24, 2017 at 17:20)
The good looks of this frameset and built bike result from a productive collaboration between engineering, industrial design, and the carbon manufacturing whether in-house or outsourced. Also Transition benefits from having a very small team of enabling decision-makers to cut out the bulls**t.

There are only so many ways to connect the hard points of four or five sizes of bike frame, yet the temptation of a formable material combined with the ability of CAD to generate all kinds of surfaces can often yield bikes with silly features and awkward stances. That is not the case with this bike, or with this design and engineering team.

TR11 has a purposeful, minimal, and still attractive appearance, taking into account the practical applications of the carbon fiber material and filtering that through the brand lens of what Transition stands for. All that, and it wins races too. Congratulations to all involved, well done.

TyroneM (Aug 24, 2017 at 17:30)
Yeah...hey Transition, gonna need you to stop pumping out amazing bikes and sponsoring talented athletes. All this positive press is making me worried I will not be able to get my hands on a 2018 Scout!

I ride TR500 and love it but it amazes me that Transition no longer intend to produce an Ali DH bike. For a brand that market themselves as the "brand of the people" and "by riders for riders" it really seems against their ethos to only produce a boutique carbon race bike that is out of reach for most people.

They seem to be moving away from producing bikes for the masses to the few who have very deep pockets. A real shame imo

The geometry got better, but the suspension got worse. It went from being pretty progressive to almost linear and it meant that despite repeated shock tuning, I never managed to get the back end working very well.

If this TR11 is a return to progressive suspension AND further better geometry AND miles lighter, I'd definitely take another stab at a Transition DH bike

jaame (Aug 25, 2017 at 2:53)
Interesting what he says about the rims. They are a mainstay of the world cup and ews. Richie rude uses them, and he must be getting on for double Tahnee Seagrave's weight. I would be putting her on lighter rims to be honest, perhaps the xm421. Another 100g could be saved there.

BobbyEnglish (Aug 24, 2017 at 15:13)
Not just Kona that have issues with brake/rear mech cables rubbing off the paint then.

BenPea (Aug 25, 2017 at 2:55)
Sad that all the beautiful bikes coming out still have to have a frigging derailleur bolted onto them.

I'd be interested to know just the frame weight (and compare that to the old frame weight). You'd think they'd have those numbers handy. So disingenuous.