Join Pinkbike  Login
I won't kid you, even after a couple of years of working for Pinkbike I am still baffled by rear suspension. I've illustrated articles about it and I've had coaching from the editors but my brain still struggles. I start reading about sag and anti-squat and what all those different knobs and switches and pressure settings do and I decide to get another hardtail.

However, much to my astonishment, Santa Cruz recently set me up with their 5010 model. I have it propped up under the best lighting in my dining room while the snow falls outside. It is so cool looking and so I've decided that this winter I will make a real effort to understand how it all works. Before I get too bike-smart I decided to draw what has been playing through my boingy-bits illiterate mind whenever my friends have tried to explain suspension designs to me.

Corny comics for your entertainment... 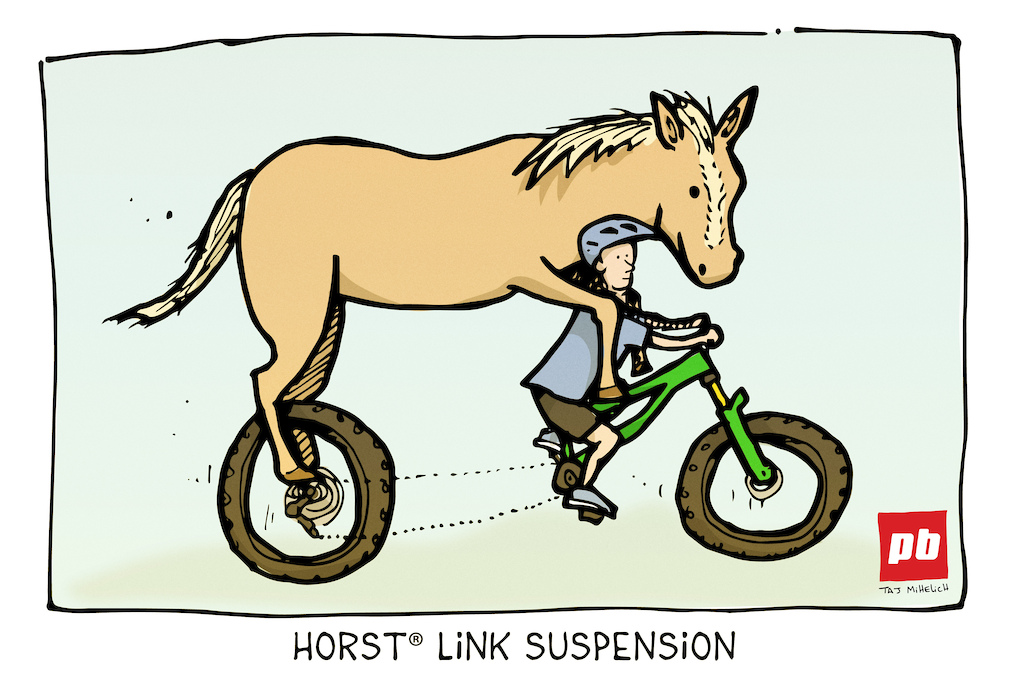 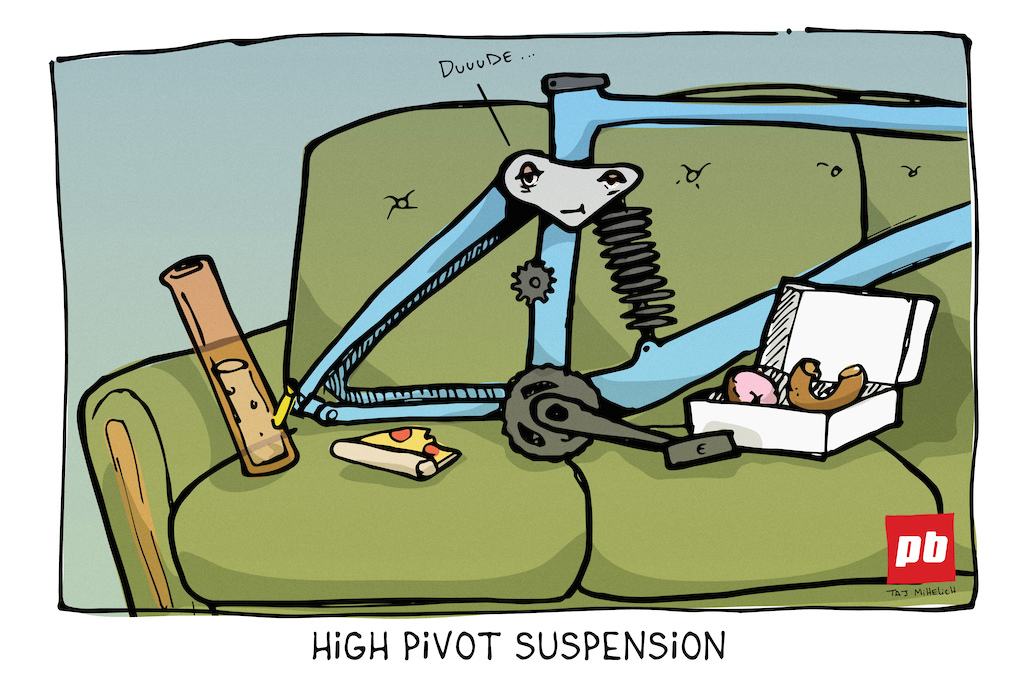 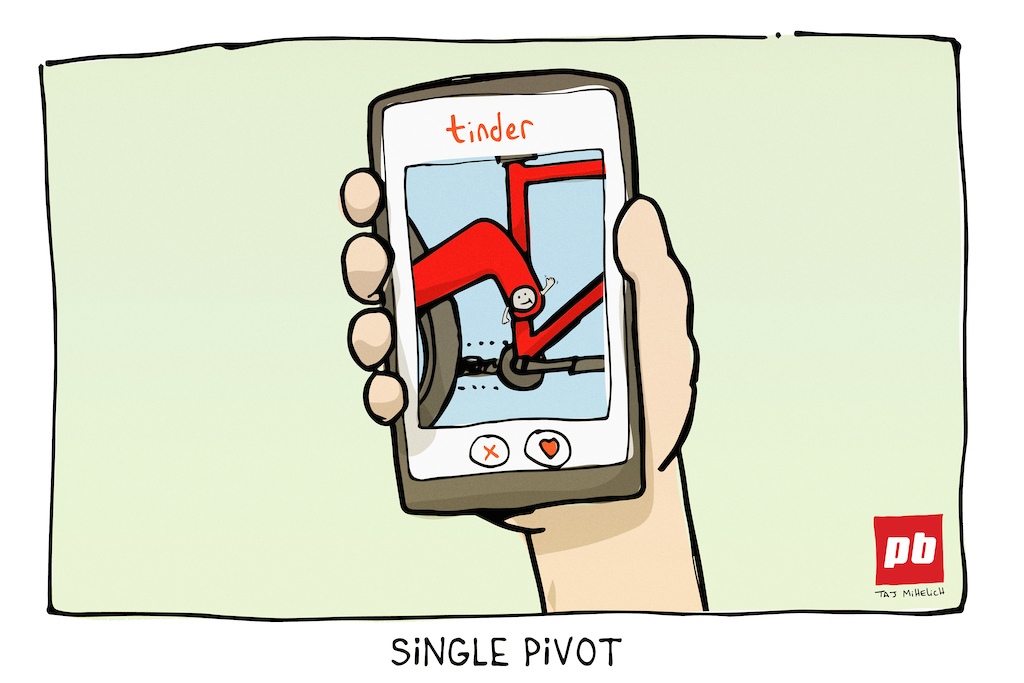 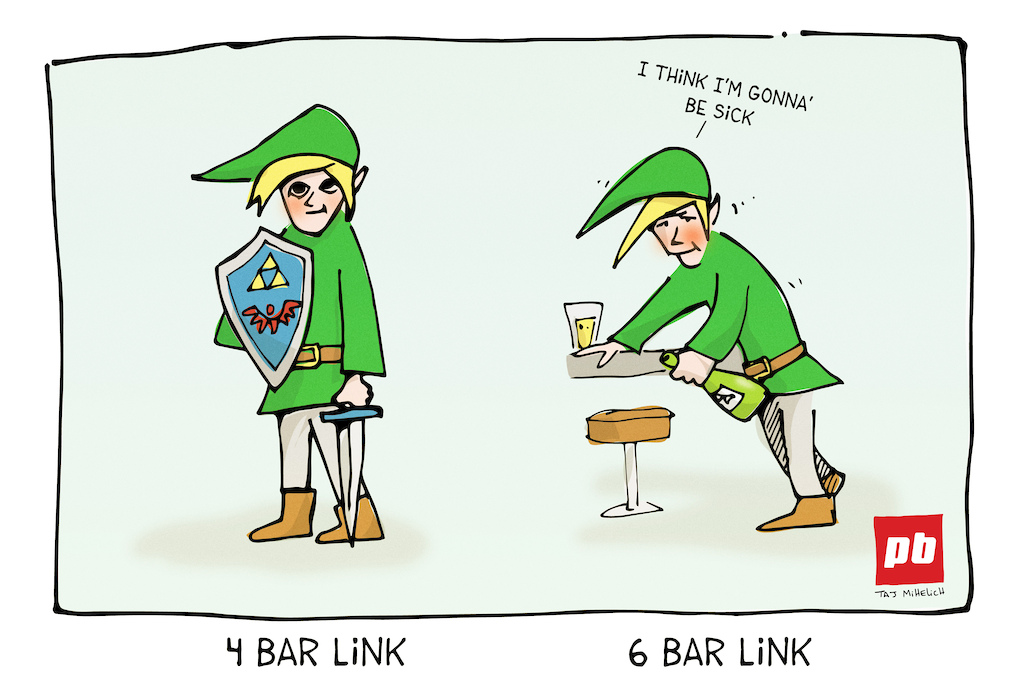 Mugen (Dec 13, 2020 at 5:43)
Looks like I get to be the party pooper that points out that the high pivot isn't a high pivot layout. Still got a good chuckle out of all of them

BenPea (Dec 13, 2020 at 12:02)
Only thing I noticed is that the bong water is defying the laws of physics. Also something about weed making you idler (not my belief, but a pun's a pun).

mtbikeaddict (Dec 13, 2020 at 12:41)
While we're there, the "Horst link" actually has... triple suspension? With no rear triangle and no support for the center/front triangle, the only thing keeping that workable would be the horse's front legs pulling the rider up... plus there's the fork and the horse's rear legs. Next level supple/sensitive/terrain-reading whatever.

Although with the horse holding you up yet being above you and several times your weight, while effectively riding a unicycle, ... ... ....
But at least the equestrians couldn't be nasty about mountain bikers anymore, cause we'd have horses too! And everybody would have to yield to us!

JustAnotherRiderHere (Dec 13, 2020 at 5:19) (Below Threshold)
Unfortunately, it is thematically identical to many of the folks taken away by ambulances every week (that we then need to figure out the bikes as ambulances do not transport bikes)

Mitch243 (Dec 13, 2020 at 11:31)
@JustAnotherRiderHere: it'll take just one single coherent sentence to convince me you weren't one of those guys

JustAnotherRiderHere (Dec 13, 2020 at 13:19) (Below Threshold)
@Upduro: Oddly, just a while ago....well, another drunk and high guy on the jump line with a broken arm...seems to be a common thread, in general with the folks leaving in ambulances and the help of EMS, Forestry and State Park staff...well, they are high and or drunk...generally. Simply, being a braggart about something so stupid is never, not ever a positive attribute. Well, not for those of us with careers and families.

Waiting for EMS there was a discussion about "Friday Fails". Seems that the folks on the jump line don't roll with GoPro's so much (spend their money on drugs and booze?)

Bigger picture. A mention from locals is that the more people crash and need assistance WHILE INTOXICATED in a park where alcohol is not allowed...with open containers, puts the rest of us in peril as they may just close trails altogether. It is an every weekend thing. We have over 90mi of trails to maintain and keep folks safe on. Substance abuse is not helpful to anyone on the trails (riding, working, walking running or rescuing).

JustAnotherRiderHere (Dec 13, 2020 at 15:27) (Below Threshold)
What this does, week after week EMS (three weeks ago it was four ambulances in three hours) is bringing attention to the behaviors of the riders, the tax burden of the trails on public land, and the cost of EMS response for these people. A majority of the folks going in for XRay and whatnot are at least an hour from home (last Sunday it was three hours from home).

This now brings into play transportation, getting their bike to them, getting their vehicle out of the park before the lot is closed and it is towed (from one of many lots over two counties and over 50 miles), and on and on and on. It does become burdensome for those of us who are part of Trail Patrol and other volunteers who make sure everyone gets out of the trails as safe as they can, assist in getting EMS into a trail and knowing the fastest way into and out of a trail region.

While I do not expect an educated response @Upduro , I do hope that you are aware that we all must be there for each other when the shit hits the fan. We need to be smart enough to not ride double black trails without the skill set to ride them - we also should not be hitting those trails while not fully able (chemically) to be safe on the trails. A broken arm on the trail affects far more than just the rider.

As the other guy said, it will take at least one coherent sentence if you want anyone to take you seriously.

JustAnotherRiderHere (Dec 14, 2020 at 2:59) (Below Threshold)
@robw515: Next time a drunk and high jump line f*ck breaks himself....we should just go the other way, ditch their bike in the trees and call crime stoppers for the drugs ..maybe child services about the kids. Oddly, it is only the (generally white trash) jumpline guys with these issues...apathetic addicts..
.

You know more than you think you do about suspension. Great comics, I look forward to seeing more of these on Pinkbike’s homepage.
Thank you for a brief moment of levity in a crazy year.

ridersmitty (Dec 14, 2020 at 14:34)
I think you want your pedaling to be decoupled from suspension action for optimum performance...

Cspringsrider (Dec 13, 2020 at 13:48)
Sunday comics are the best! Thanks Taj they were all great. Your comics always make my week.

This one was fantastical Taj.

Molesdigmyjumps (Dec 13, 2020 at 5:07)
So it's a clever Santa Cruz advert, nice . The Zelda one is pretty good
Below threshold threads are hidden