by yinro
Views: 7,979    Faves: 67    Comments: 4
Since 1999, the Santa Cruz Team MIA has had this great tradition - leaving the cold French winter and travelling to an exotic destination to celebrate the end of the season. This year they have decided to explore the Kingdom of Thailand off the beaten path. After few days in Shenzhen, Maurin and Maxime leave China on December the 1st, a long journey to Northern Thailand which starts in a stifling atmosphere (compare to the cold cold French winter), with an hour taxi drive between the airport and the bus terminal where they board a night bus to reach Chiang Mai, 800km up north. After 10 hours the bus reaches the Rose of The North. 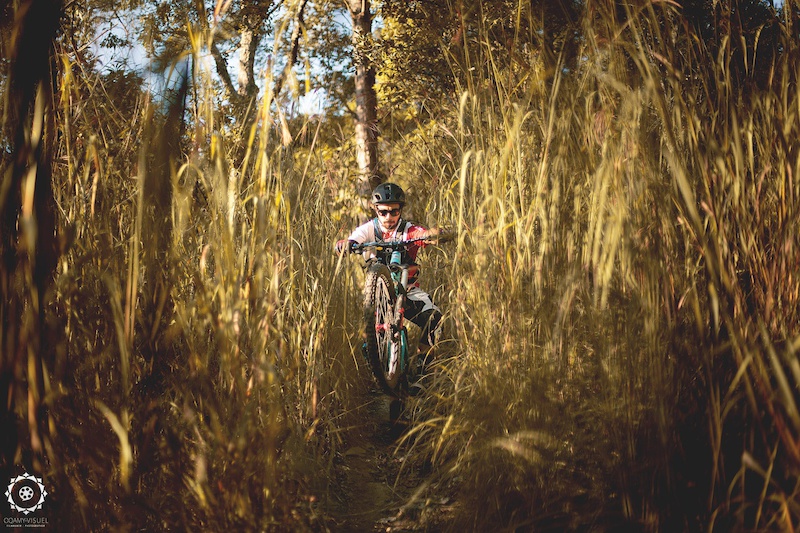 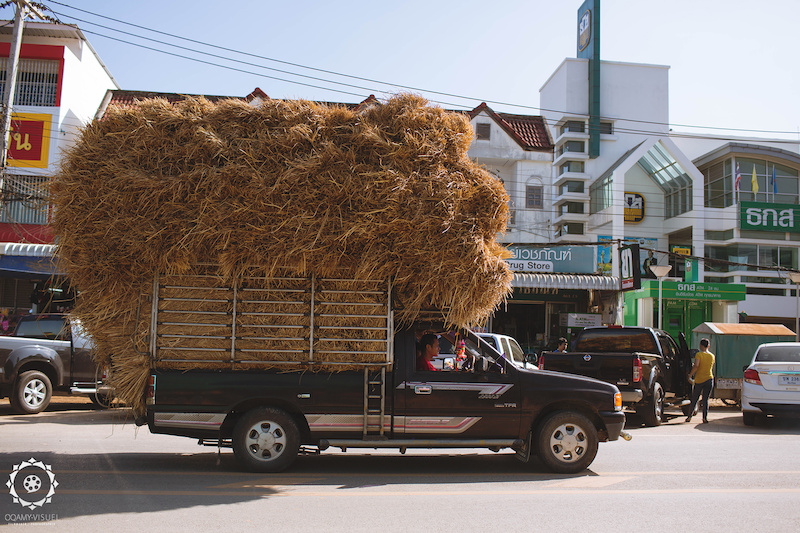 It’s time to build their bikes while waiting for the rest of the crew. Antonin Pergod aka OQAMY (our video maker & photographer) flying directly from France and Thiromana Yin aka Romana (founder of Adventure We Like) who managed all the logistics for this expedition. Romana has been working in the MTB industry in Europe for a while before moving back to Asia a few years ago. He’s been exploring the area extensively with his MTB (from Thailand to Indonesia) and shares his experience with fellow travellers eager to ride some of the most exotic destinations. His local partner in Thailand is Damian Mulligan who left Australia for Chiang Mai something like fifteen years ago. The man knows that part of the world very well and offers his mountain bike guide services through Mojo Adventures. Together they have been planning the trips for months and will take the two riders Maurin and Maxime to the most beautiful trails of Northern Thailand. 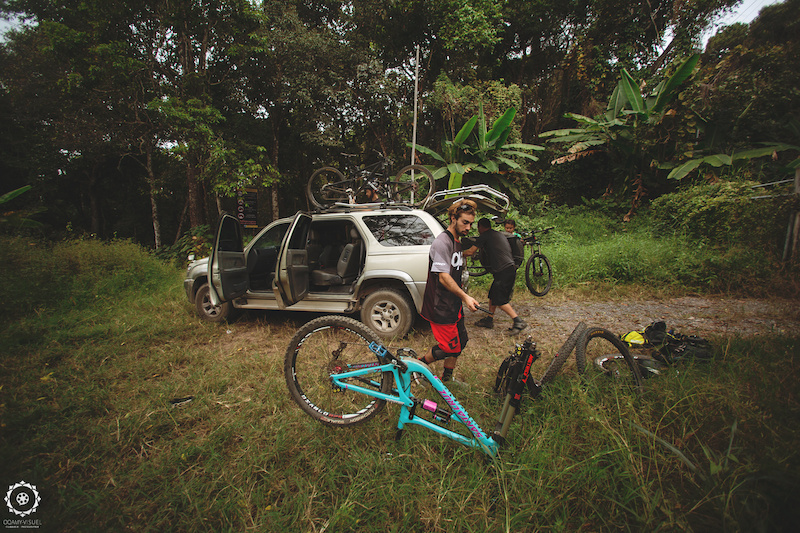 Let's get the bikes ready. 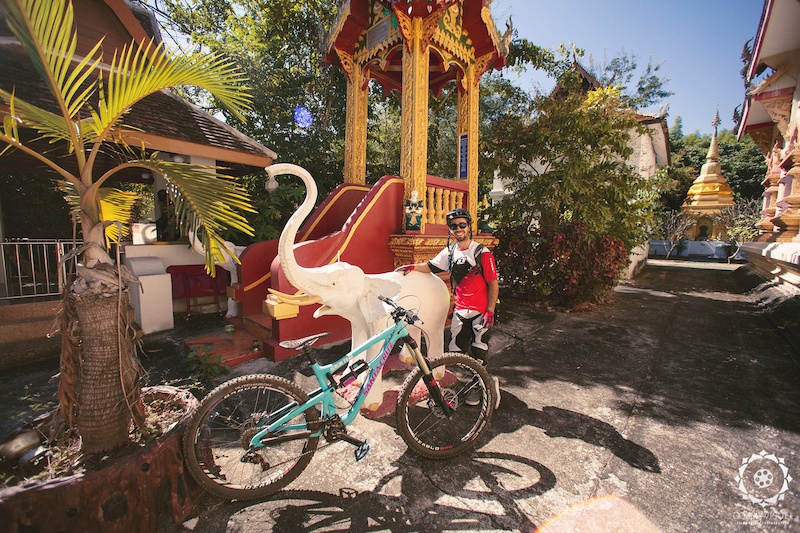 Pick up your ride.

If you are into proper mountain biking, the trails in Chiang Mai are amazing. From mild to wild, some as long as 14kms of DH, yes you read that right! The trails are all natural trails since they are all in a national forest so nothing is man-made and the conditions of the track changes after a heavy pour down of rain. The trails are through some dense jungle, bamboo forest, rock gardens, and some fire roads. 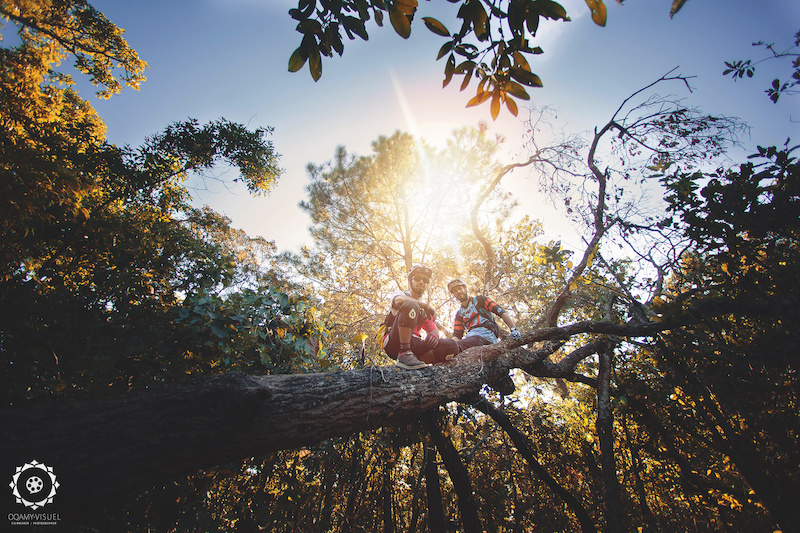 Max and Maurin can virtually ride anything! 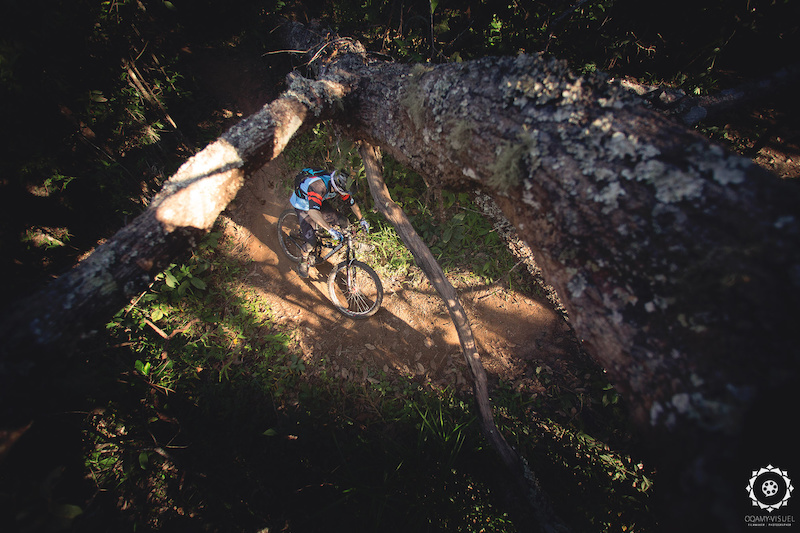 Maurin between light and darkness. 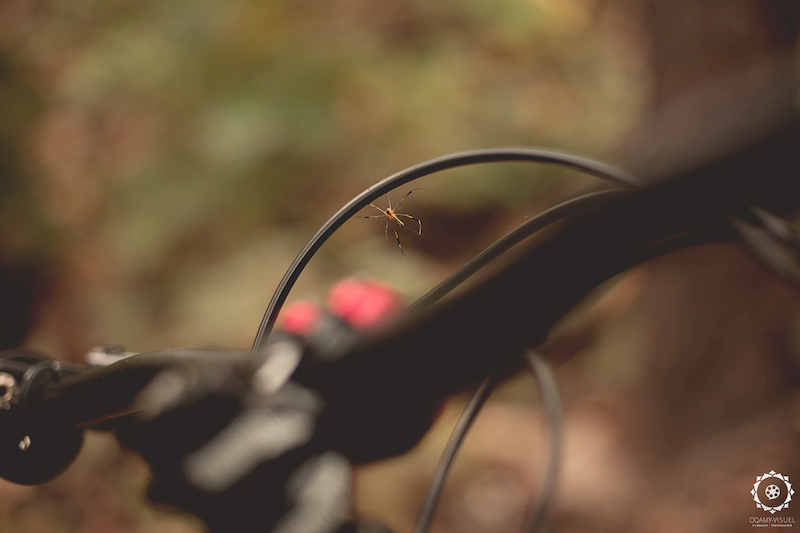 Don't mess with the locals.

Some of the trails can be tough and more suitable for those with downhill experience but no worries there is always someone 'sweeping' behind. You will find all you could ask for, steep techy sections, rock gardens, flowy sections, drops etc... The locals usually have three runs a day which add to 20.000 ft of descent a day! You won't be disappointed with the trails. 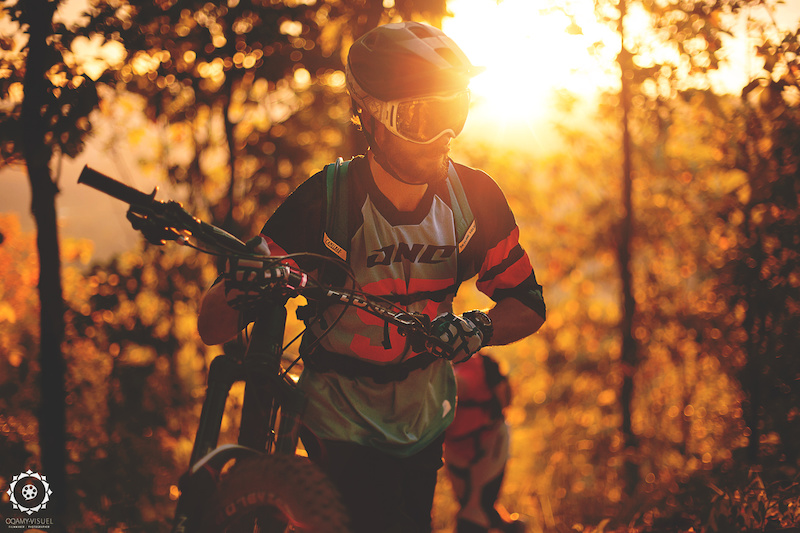 Our favorite trail goes by the name of Bamboo trail. It’s only about 10km but it's by far the smoothest run, imagine more than 10 km of trail with some natural jumps on the very first part and then a long flowy trail through a bamboo forest. 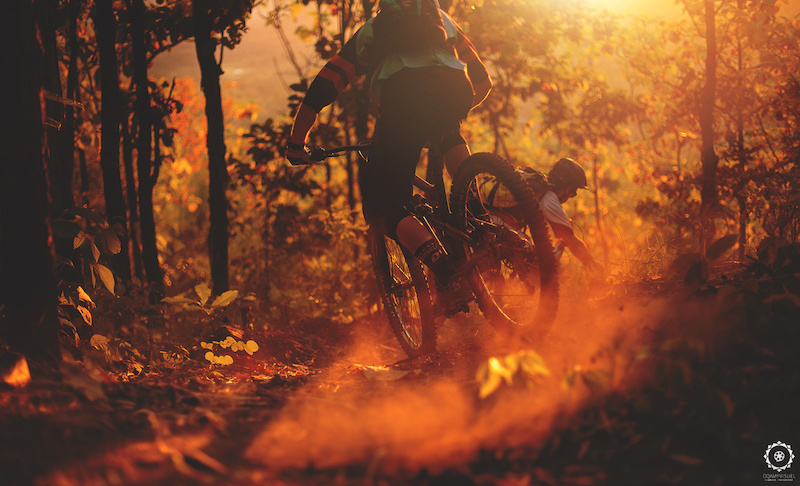 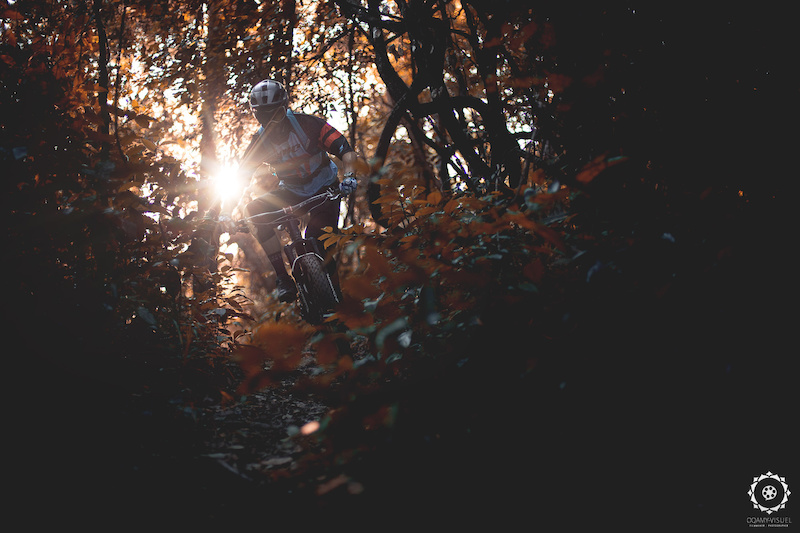 Maxime and Maurin had to ride until late to make our photographer happy.

The second favorite trail is Ghee’s house, located on another face of the same mountain. 16km down across dense forest, typical village, coffee culture and red chilli pepper plantation, usually a one hour ride. We stop at one of those orchards and got the opportunity to taste them … raw ! Not a really good idea, thank you, Damian! 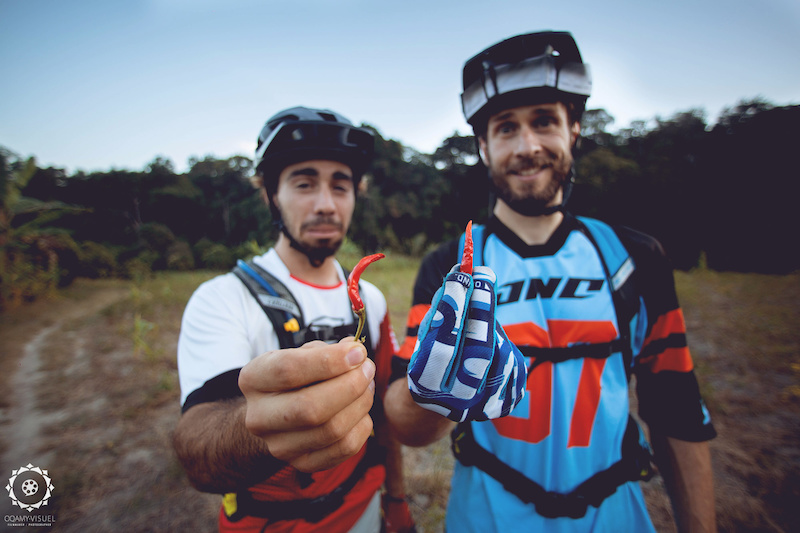 Would you dare to eat some raw chilli? 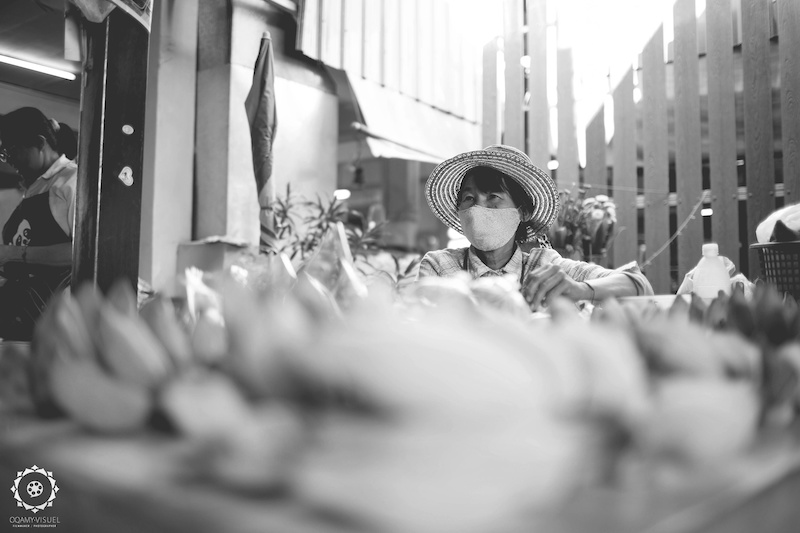 Another day, another spot

Once we were done with all the trails in Doi Suthep we went to a different location, about one hour drive from Chiang Mai where races are organised every year, the track was handmade and features nice berms, a few big jumps, some steep sections and rock gardens. 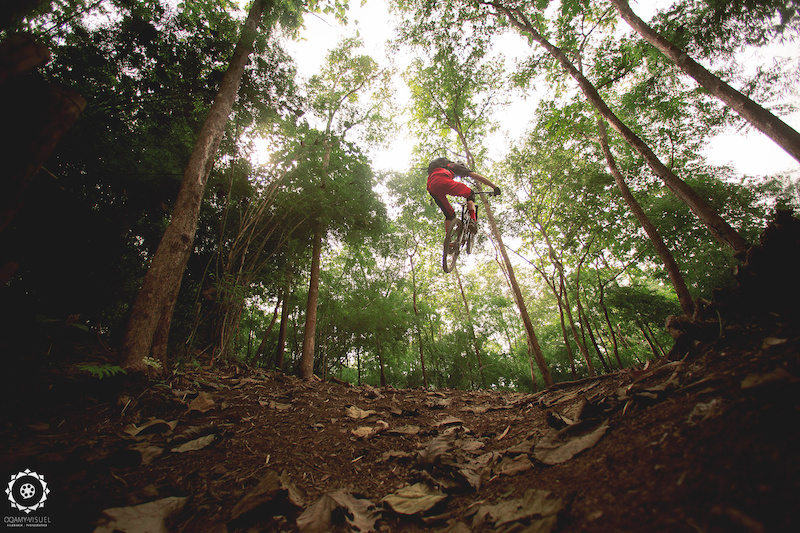 Maurin getting some air on one of the local downhill tracks. 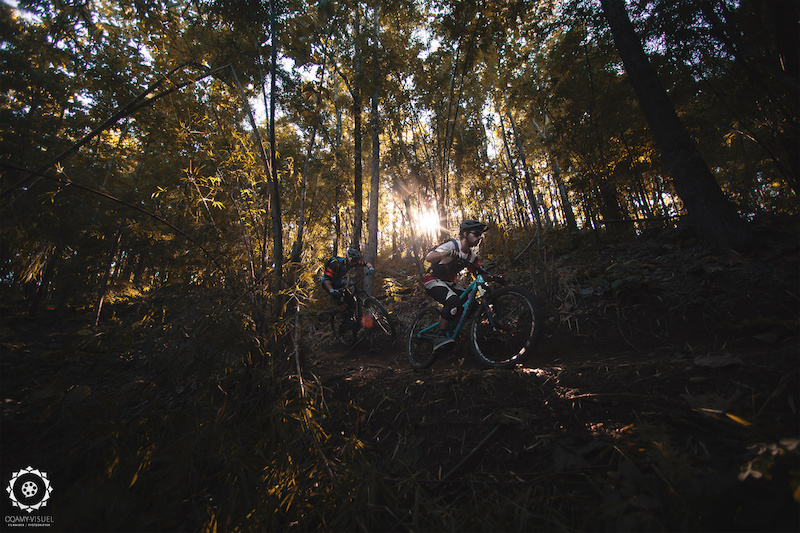 Max and Maurin shredding every inch of the trail.

A very decent three to four minute run through bamboo forest, with a few table jumps at the bottom, where the local kiddos are riding wearing flip flops and a pretty old bicycle. 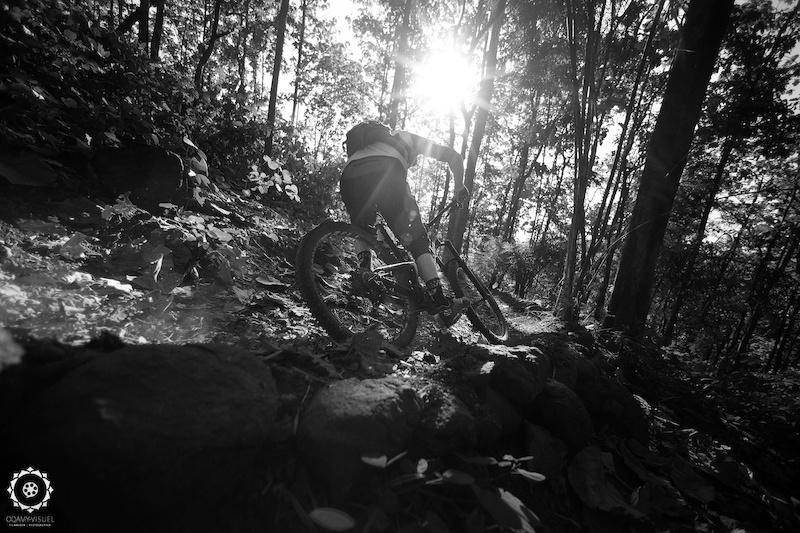 Off The Beaten Path

Romana and Damian kept the best for the end of the trip by taking us to the top of Doi Inthanon, 2279m high, the second highest peak of Thailand. 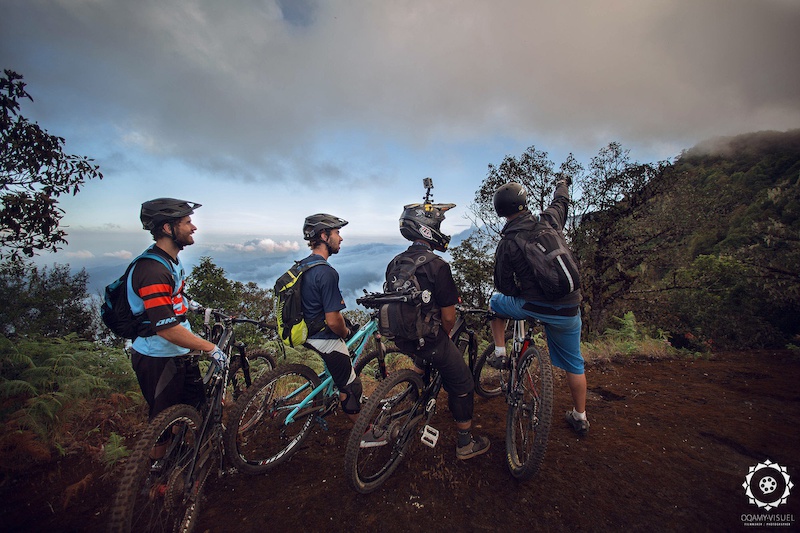 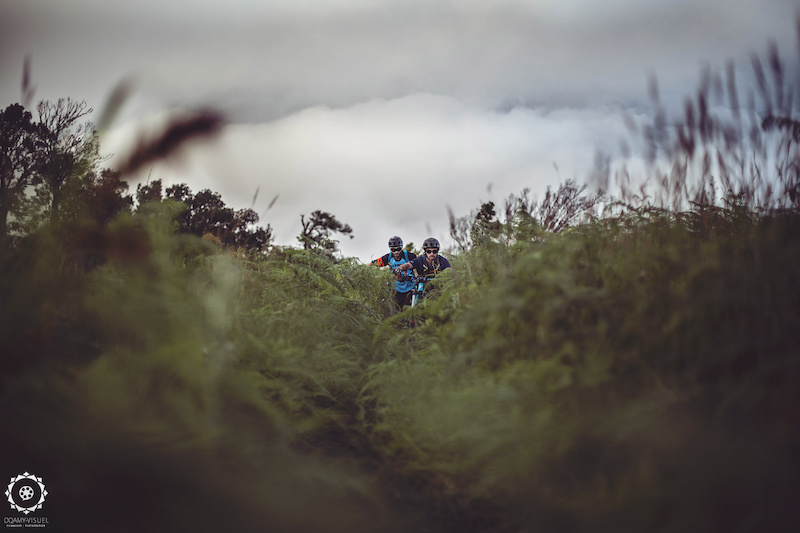 On our way to the highest point in northern Thailand.

We had to hike/pedal/carry during a three to four hour walk up the 800m elevation with our bikes, cameras, and video equipment. 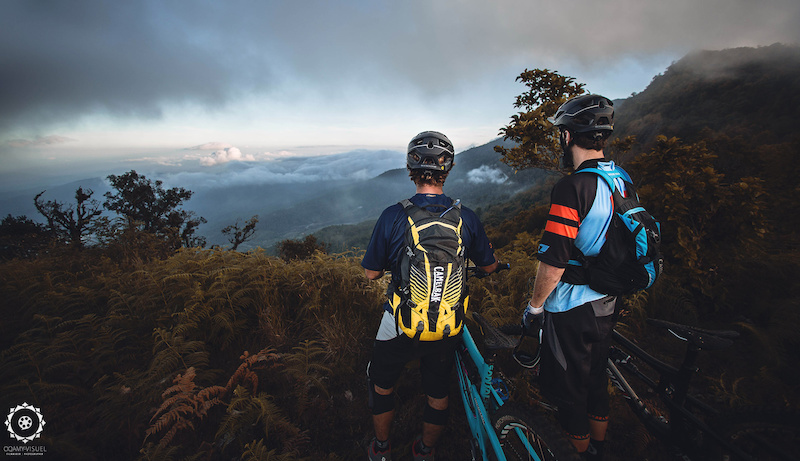 After a few hours climb, we are getting closer and closer to the top of Doi Inthanon. 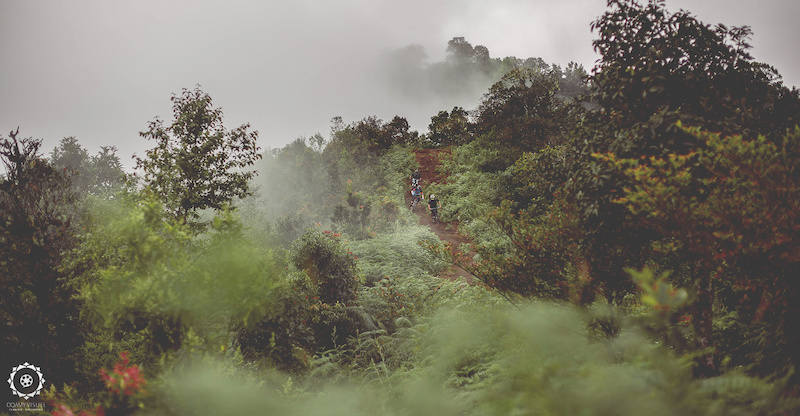 The reward after a long climb, riding down Doi Inthanon (2100m above sea level).

The reward is a wonderful unobstructed crest, 5km long through ferns and lush forest! This area was spotted by Damian few months before, and very little people get the opportunity to come here with a bike, what a chance for us to finish this trip in this extraordinary place. 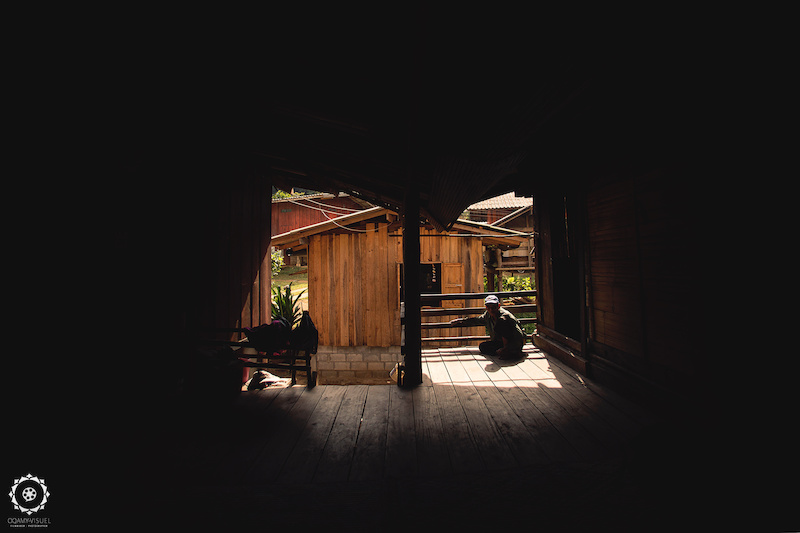 One of the highlights of this expedition in Northern Thailand, the hospitality of the Bak Kon Yaw tribe. 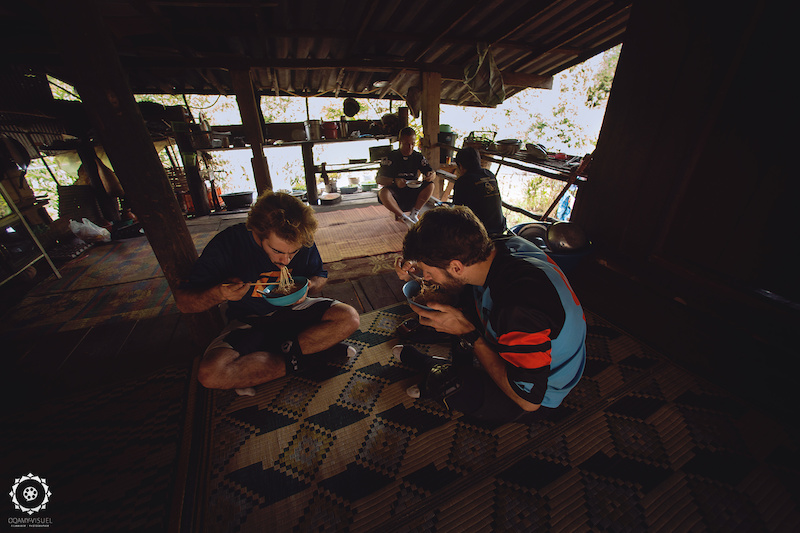 Traveling with a knowledgeable guide is the opportunity to uncover and explore a destination through the eyes of a local. Damian and Romana took us to some places we wouldn’t have gone, far from the crowd and mass tourism, the highlight was the four faces Buddha temple in the middle of the jungle or the local restaurants where you can eat big portions of local food for few hundred baht only, what a bargain. 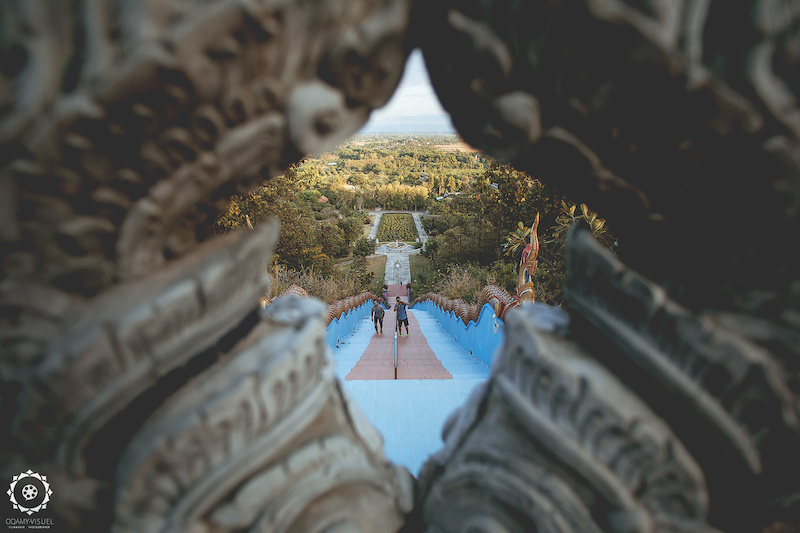 In Thailand, most of the Wat (Pagodas) are built on a hill. 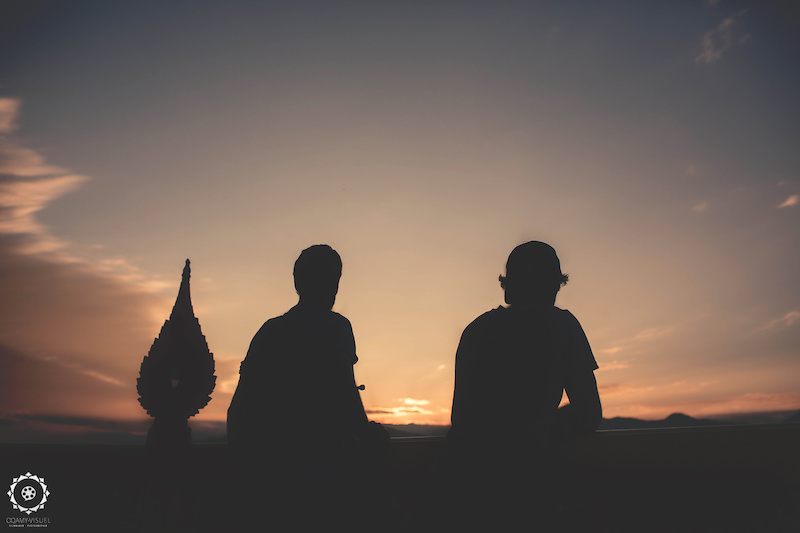 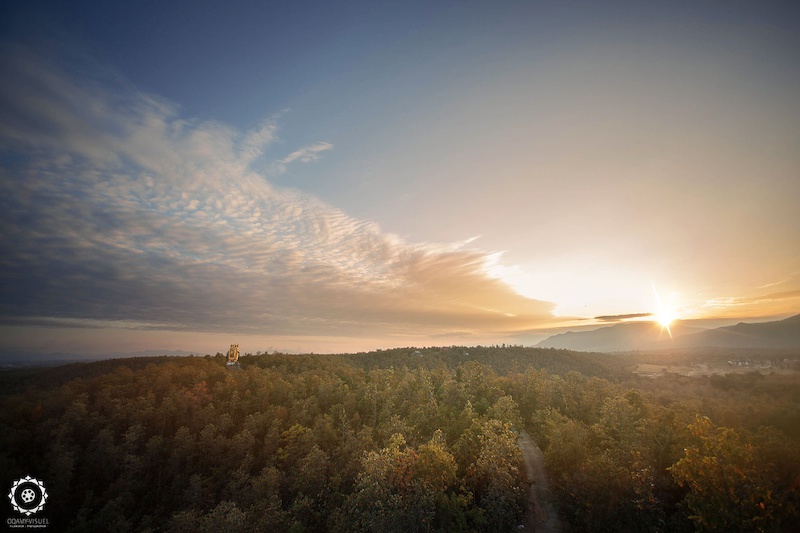 A special thanks to our driver who had to keep up with our f... jokes all day long and a big shout to everyone involved in this trip. 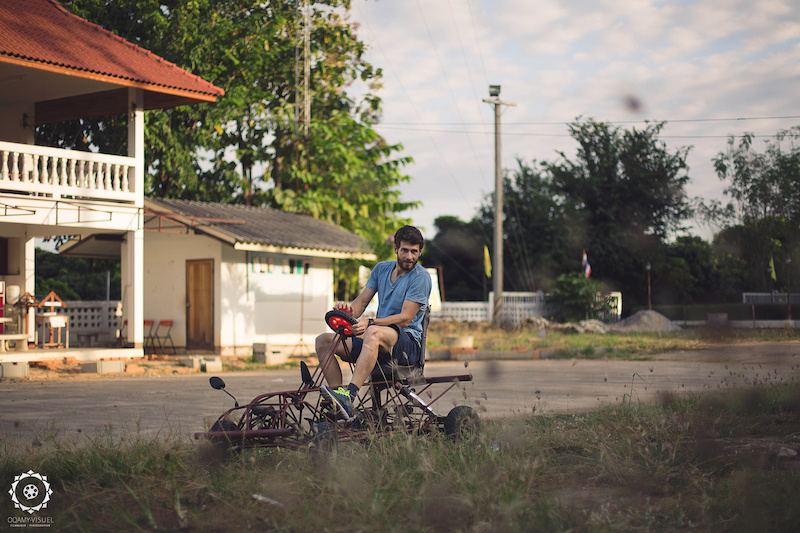 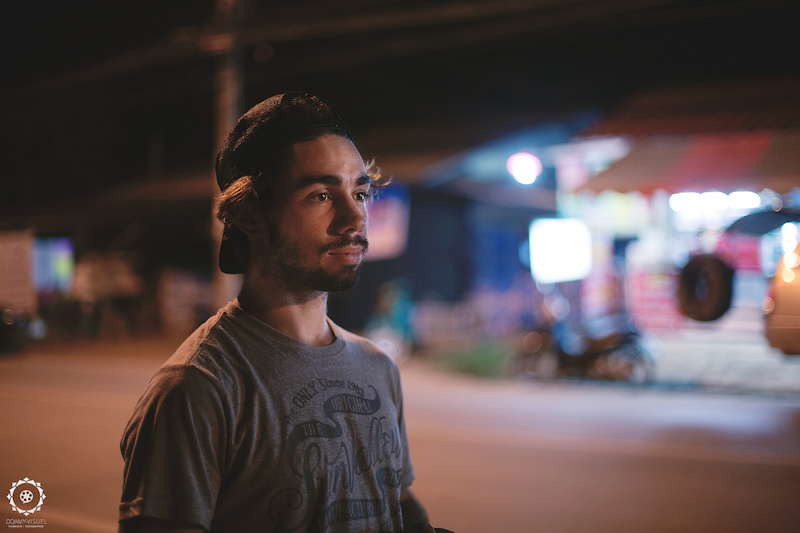 Maxime meditating on his trip.

Danielmbowyer (Apr 24, 2016 at 1:16)
Everyone wants to go to the beaches in the south. If your going to Thailand, don't skip the north, its rad! Chiang mai is an awesome destination. Great food, daily adventures, very chilled out place to just exist for awhile. Then, go south, 'cause its cool too.

spankthewan (Apr 24, 2016 at 21:37)
I recommend taking a motorcycle from Chiang Mai to Pai and doing the whole Mae Hong Son loop. Make a week out of it, and do some downhill biking with xbiking Chaing Mai when you return. Jet down to the south and beaches after surviving their unsterilized trails.

Mattin (Apr 24, 2016 at 13:04)
@timrippeth: same here, the travel stories are my favorite articles. Reminds me not to spend too much money on my bike and rather spend it on taking my bike to amazing places.

jackyboy (Apr 24, 2016 at 20:03)
Yeah, was there a few weeks before and didn't try the bike trip (unfortunately). I remember the prices for a full DH-day, with bikes, guide and shuttle, it was something like 1000/1200 Baths. 10 hours bus trip from BK to CM is someting like 800 Baths, Chiang Mai is very special, touristic place without the bad experience of the Southern Island which are overcrowded. Loved it. Love Thaï people! Actually in Shanghai (CN), and it's not the same...

TheUnknownMTBR Plus (Apr 24, 2016 at 3:34)
y u no drink north Thai mountain moonshine, u 2 healthy south is a crime infested cesspool, chiang mai is best for real thai food and cultural experience

nsteele (Apr 24, 2016 at 7:57)
Thought this was gonna be Greg and Ratty taking some vacay after their poor showing at Cairns!