Team MIA SANTA CRUZ rips the trails in the Philippines

So as not to lose some good habits, part of the MIA Santa Cruz team set off to spend winter in the Republic of the Philippines, the south East Asian island state, located in the Pacific Ocean. 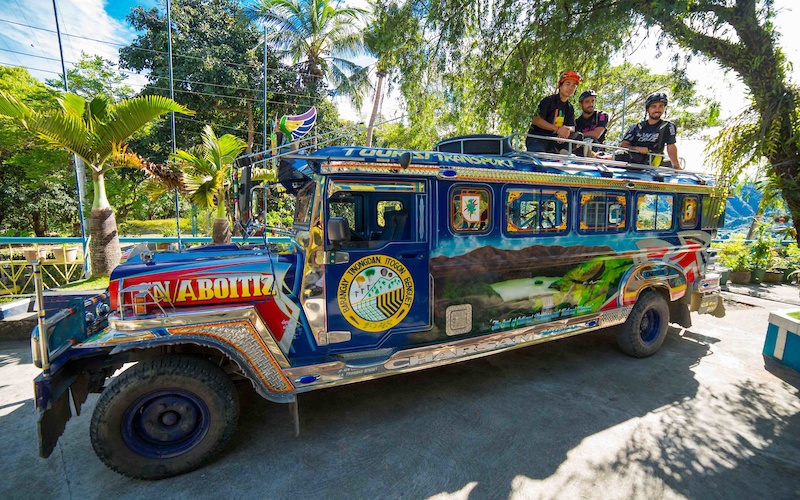 Traveling with their Santa Cruz, heading for this quite unusual destination for us mountain bikers were the riders Maxime and Yohan, accompanied by photographer friend and video maker, Will Camus. While Thiromana Yin, founder of “Adventure We Like” was in charge of logistical planning.

Heading for Baguio, seeking out the first mountain biking areas.

At 200 kilometres north of Manila, Baguio is a town of 300,000 inhabitants, situated in the Province of Benguet, at 1500 metres elevation. In the middle of the town, you can find the John Hay Camp wildlife reserve, which in the last century was where American troops stationed there, spent their free time. While today it is a place which all Baguio citizens can enjoy. Easily reachable, with its vast network of purpose built trails for mountain bikes, it is a little paradise for the many riders who go there. 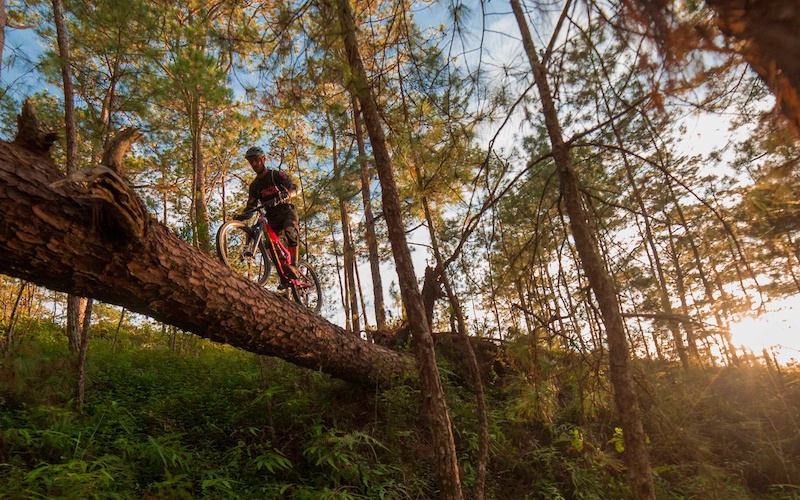 Yohan is given a free rein to unleash his passion for street trial riding around most of the reserve, jumping from one tree trunk to another or performing 360 nose picks from walls. Pretty challenging!

And now, on to the Flow
In Trinidad, close to Baguio, is the Flow, a bike park built by a group of desperate riders using picks and shovels, on the hill overlooking the town. In the high part of the trail, you can find the most awesome jumps, some as long as 10 metres, all perfectly shaped. 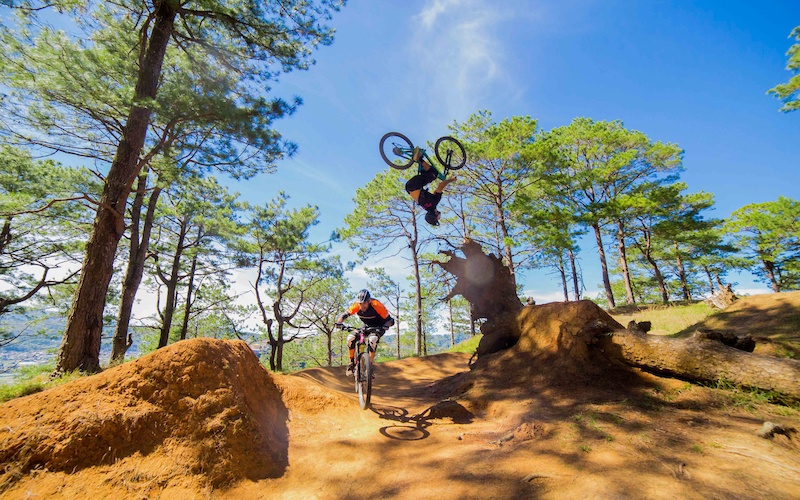 Two lines cross one another, one is straight with high jumps, while the other is a series of turns and small jumps. Guaranteed fun!

On with the adventure!
Accompanied by Jordan, one of the famous “desperate pick axe bikers”, we set off early in the morning for a natural location which he himself has recently discovered. A three hour drive to start off followed by a four and a half hour climb on our bikes. 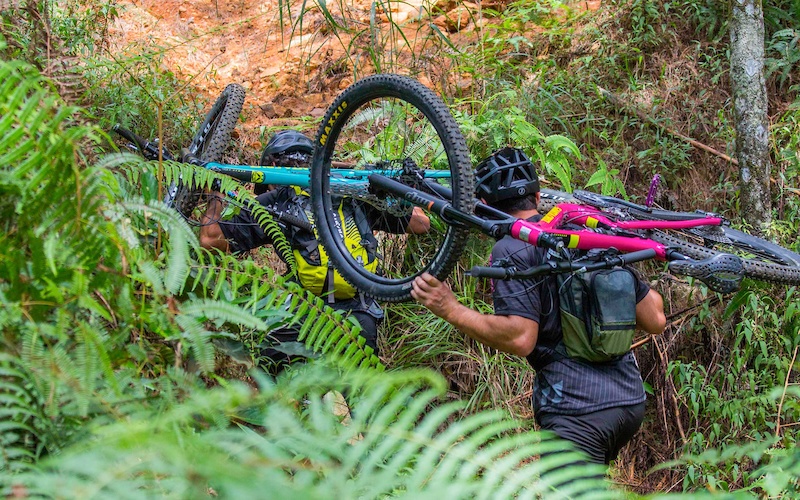 With long hike a bike sections in the middle of the jungle with leeches clinging to our legs, in the rain… we wanted adventure and we found it!

After reaching 2150 metres elevation, we had a short break to admire the spectacular views. A 14 km descent awaited us; we were not going to miss out on anything! The first part of the trail had awesome flow which took us to a ridge, where the trail turned into a really technical singletrack. What bliss! Our morning’s efforts were being repaid way beyond our expectations. Lower down the atmosphere changed again. We went through a rice field, passing by cattle and horses grazing freely. 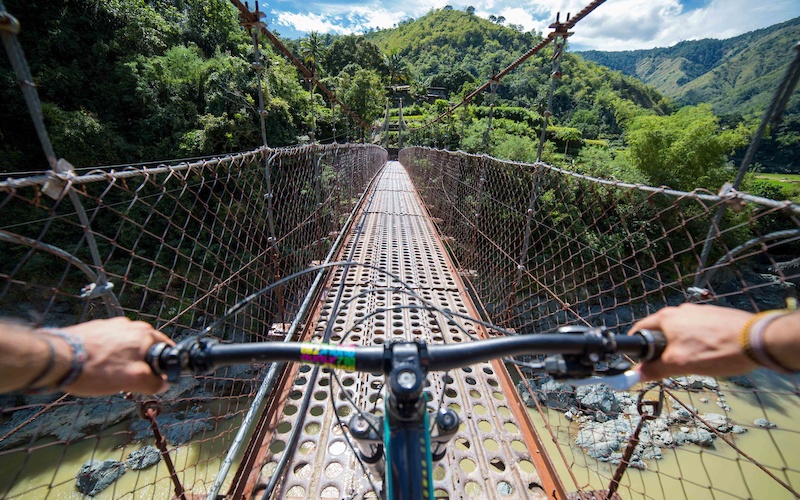 When we got to the valley floor, a suspension bridge took us across a river.

Despite our efforts, the ride was very long and tough, and it is dark by the time we arrived at the “excursionists’ house” in a little mountain village, where we were in for the warmest of welcomes.

News about our arrival has spread and many local riders come to join us. A shuttle service is improvised and with just a few pesos, we climb Monte Samat pulled by... side cars!!! From its peak, you can see a 90 metre high cross, erected in honour of Philippine and American soldiers killed during the Second World War.

It is time to get the bikes out and take off to discover the routes prepared by the B.E.E.R team riders. The trail, just like a DH, offers all kinds of biking challenges, including roots, steps and rock gardens. 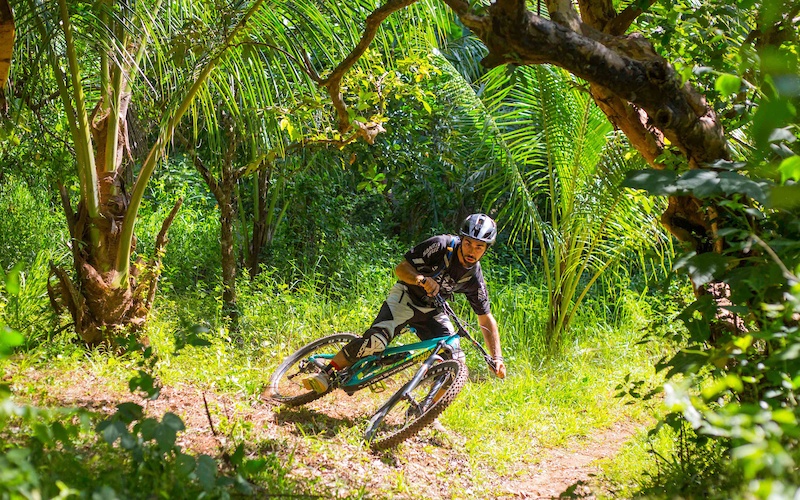 It twists and turns through banana and coconut tree groves. It would be hard to find anything more exotic.

The day flies by, with heart-stopping descents and climbs. The trip comes to an end in the evening, with an incredible dinner of fish and seafood on the beach.

If you want to cut short your winter, think about the Philippines, it was a marvelous discovery for us. We would like to thank Thiromana Yin – Adventure we like – for the logistical planning, all the riders who accompanied us during our stay, the sponsors of the MIA Santa Cruz team and Race company.

DirtboxTom (Jan 18, 2017 at 2:28)
Is November a good time to visit the Philippines? I have a two week trip to book up later this year and seriously considering visiting - looks like an incredible country.

KahMoTeQ (Jan 18, 2017 at 4:08)
@DirtboxTom: It's the tail end of our wet season so it'll be a mudfest in most of the off road trails. If you are planning on some bike touring November to January would be the best time if you don't mind the occassional downpours because these months are the coolest times (high 20's-low 30's) in the country.

KahMoTeQ (Jan 18, 2017 at 8:44)
@Bradleym: Do you mean are there bikes for hire/rent in the Philippines? There are some places/facilities that have rent-a-bikes. These are rare. Rental bikes, if you can find one, are usually low end bikes.

DirtboxTom (Jan 19, 2017 at 2:52)
@KahMoTeQ: Thanks buddy good to know. I'm planning a trip with the girlfriend, who doesn't ride sadly so not much biking planned (the mud wouldn't put me off - I live in the UK!

Thanks for the heads up though. Take it easy

starpak (Jan 17, 2017 at 1:50)
Santa Cruz has succeed in every way. Great bikes, great riding, great promotion, great teams and all but the most important is this: great ambience, laid back attitude but without lacking any skills. I cannot think of any other brand that has succeed in this. No matter the high prices of their bikes, you still want one! You want one in the sense that you'll be a part of this (no need to say how good they are). Good for you Santa Cruz!

geoffmorales (Jan 17, 2017 at 0:04)
Beautiful baguio , never knew there were awesome trails there! Hope to visit soon!

arna86 (Jan 17, 2017 at 16:01)
When I was passing through Baguio a few years ago, I saw so many mountain bikers on high end bikes. I'm moving within a few hours flying distance this year so I'll definitely be taking the bike for a few trips

KahMoTeQ (Jan 17, 2017 at 2:32)
@dovahkiin13: Good job bro. Didn't know what they REALLY were until some years ago although they were ubiquitous here in the RP.

Zuman (Jan 16, 2017 at 22:46)
More features on the local trails might lead to more trail developments and maybe local business plus government support.

sellcrackcocainetofundhobby (Jan 17, 2017 at 15:23)
Was thinking how the fuck guy on blue bike sponsored most way through this it was almost like a guy tagging along then last 20 seconds I seen why. Both got skills

KahMoTeQ (Jan 18, 2017 at 1:56)
I am a local and I AM quite disappointed that we don't have as many trails like this here in the Philippines. We have to make do with unpaved roads and foot trails most of the time.

KahMoTeQ (Jan 19, 2017 at 14:48)
@rael: IKR. I used to volunteer at maintaining and building trails when I was out of the country as an OFW. I've been trying to get some local riders here to start digging but has only met tepid assurances of cooperation if not out right resistance. Don't even get me started at getting approval from the LGU's. Might as well do a guerilla digging.

rael (Jan 19, 2017 at 22:08)
@KahMoTeQ: If it is as you say, then it's quite unfortunate. I thought we as a people with the so called "bayanihan" culture could be more cooperative. Here in and around Metro Manila, we can't really do anything. Trails are built by private land developers. I'm not sure how it is in the provinces.

cowpatchman (Jan 20, 2017 at 2:47)
@rael: We built the jump trails these gentlemen rode on up north. It is quite understandable why some don't commit to building such. It takes so much time and a lot back breaking work with basic tools. Some jump ramps take weeks to build because of the digging and dirt moving. We're lucky as a team because each one of us are very passionate at what we do. In and around Manila, there are a lot of guys as well that invest in such building. We hope this vid would spark inspiration for lot more bikers to start building trails.