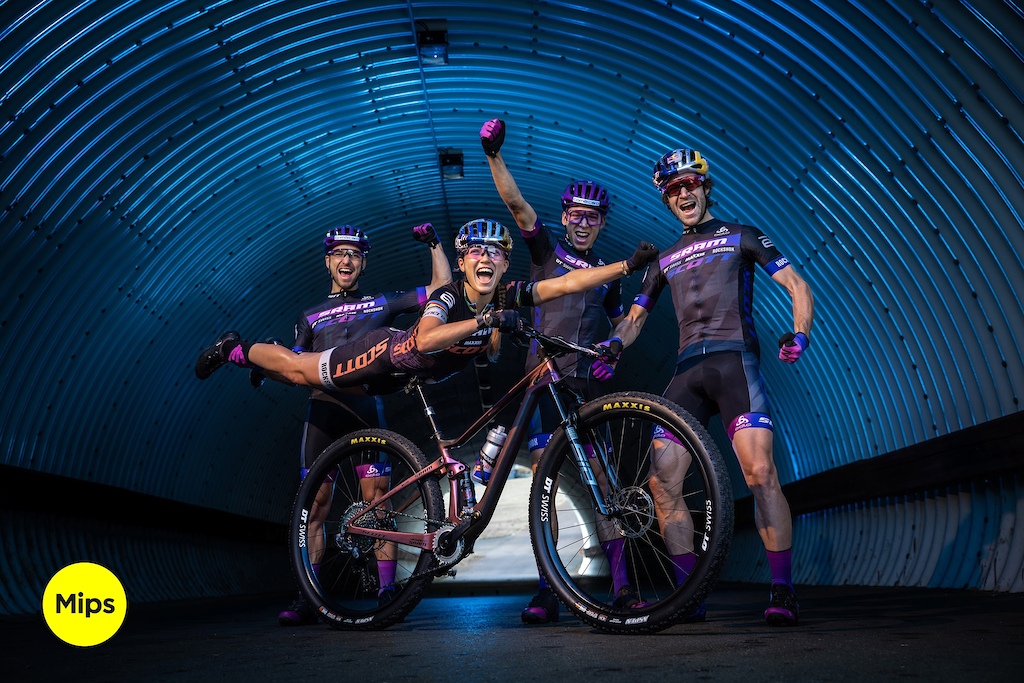 Brandon Semenuk announced he was joining Team MIPS in December and now MIPS has announced the latest addition to Team Mips - the SCOTT-SRAM MTB racing team. Team MIPS says that their core mission is to raise head protection awareness and the athletes signed, above all, will draw upon their own experiences to encourage all people, regardless of age, skill level, or preferred sport, to make the right decision when purchasing a helmet.

Courtney is among the most outspoken athletes when it comes to brain injury awareness. For her, the decision to join Team MIPS reflects her passion to educate people about the dangers of brain injuries, how they happen and what you can think about as a rider.

About Team MIPS
Kate Courtney and the SCOTT-SRAM team represent the third member to join Team Mips. Henrik Harlaut, the Swedish freeskier who is the most decorated skier in X Games history, joined in September 2020; Brandon Semunuk joined in December 2020.

Team Mips is a global force of helmet safety advocacy led by athletes from around the world, spanning a diverse range of backgrounds and professional sports including cycling, skiing, motorcycle/motocross and more. The core mission of Team Mips is to raise head protection awareness and lead the world towards using safer helmets. Its athletes, above all, will draw upon their own experiences to encourage all people, regardless of age, skill level, or preferred sport, to make the right decision when purchasing a helmet. Many of the athletes have either experienced a head injury personally or have worked in close proximity to those who have.

nskerb (Mar 24, 2021 at 13:46)
@EnsBen: I agree. The dude is goofy and his passion for skiing is unparalleled. I don't think there is a much better example of someone who has stayed so truly themselves while climbing to the top of their sport. Dollo is the peoples champ.

sarahmoore Mod Plus (Mar 23, 2021 at 12:06)
My understanding is that by joining Team MIPS, athletes are committing to advocate for head protection and brain injury awareness.

snl1200 (Mar 24, 2021 at 8:24)
Yeah- It think it works like this: They get paid money- they wear the logo and help promote it- MIPS continues to be the Gore-tex of the brain bucket game. No hate though- glad to see they put money in the game, have some of the top athletes in the sport promoting brain protection, and hopefully keep refining products to help our brains last longer.

samnation (Mar 23, 2021 at 13:34)
MIPS needs to do a better job of getting out in the communities now, having riders like Courtney and Semenuk is great for the news but the family who are trying to decide if their child's helmet will come from a bike store or Wal-Mart probably don't know who these people are. That same family however, gets the recreation guide from the city every year and reads it for the swimming lessons, hockey, and soccer schedule every year.

*Son: Right there, behind that massive bike... no right there... behind the woman that's laying down on that bike like Wonder Woman... No to the left of the man with mutant sized legs... ah forget it.

iamamodel (Mar 23, 2021 at 21:42)
I have had three MIPS helmets and they have all been, by far, sweatier than my previous bazillion helmets. Looking around or g-outs cause sweat to drip into my eyes, making it more likely that I'll crash. I avoid MIPS now, and that's getting harder to do. Prevention is better than a cure.

Although I appreciate the work and research done to reduce brain injury and I’m not generally a conspiracy theorist. This paper suggests that they have merely fixed a laboratory problem.

If this is the case the truth then becomes financially inconvenient. I worry that funds are then spent protecting their market share using the same testing methods rather than advancing models that will make a real improvement to safety

iamamodel (Mar 25, 2021 at 3:14)
@Mikevdv: Hmm, I'm not trying to oppose any claims that MIPS works in reducing brain injuries. From the standpoint that it does work as advertised, I'll still avoid it as I am more likely to crash wearing a MIPS helmet since there's more sweat getting into my eyes.

Mikevdv (Mar 25, 2021 at 5:55)
@iamamodel: understood,
You can probably just feel better about it now.
My favorite helmet is only available in non mips.
I felt I owed my brain a better one until reading that article.
Now my brain says it's OK.

ReformedRoadie (Mar 23, 2021 at 19:49)
Kinda funny Nino is just lumped into the SCOTT-SRAM team...
What’s a guy got to accomplish as a racer to get called out by name?