Join Pinkbike  Login
Go for a quick walk around the paddocks of the Frew Farm and you'd spot a few familiar faces with their chosen weapons to ride the hand-built jump line at this year's Farm Jam. Have a quick look at what the boys are rolling down the course on. 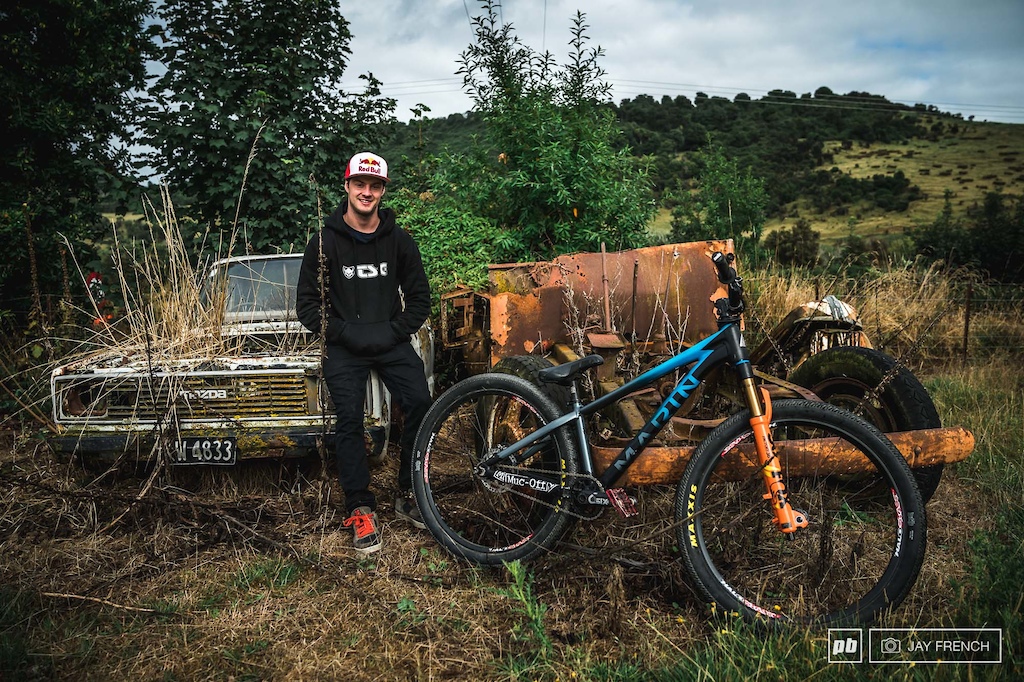 Matt Jones and his self designed Marin Alcatraz 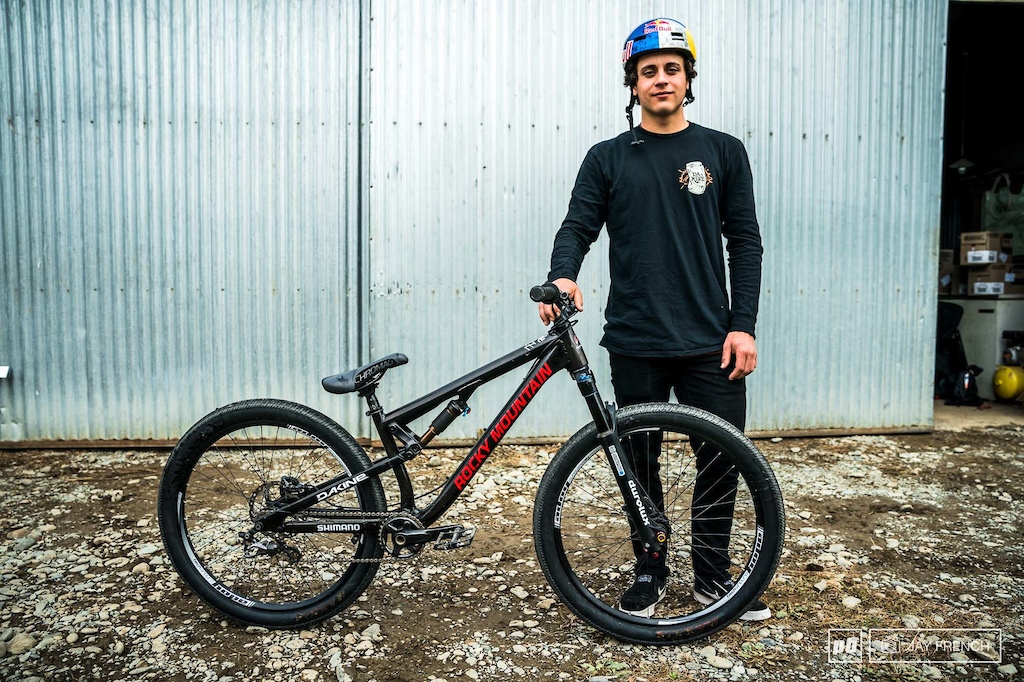 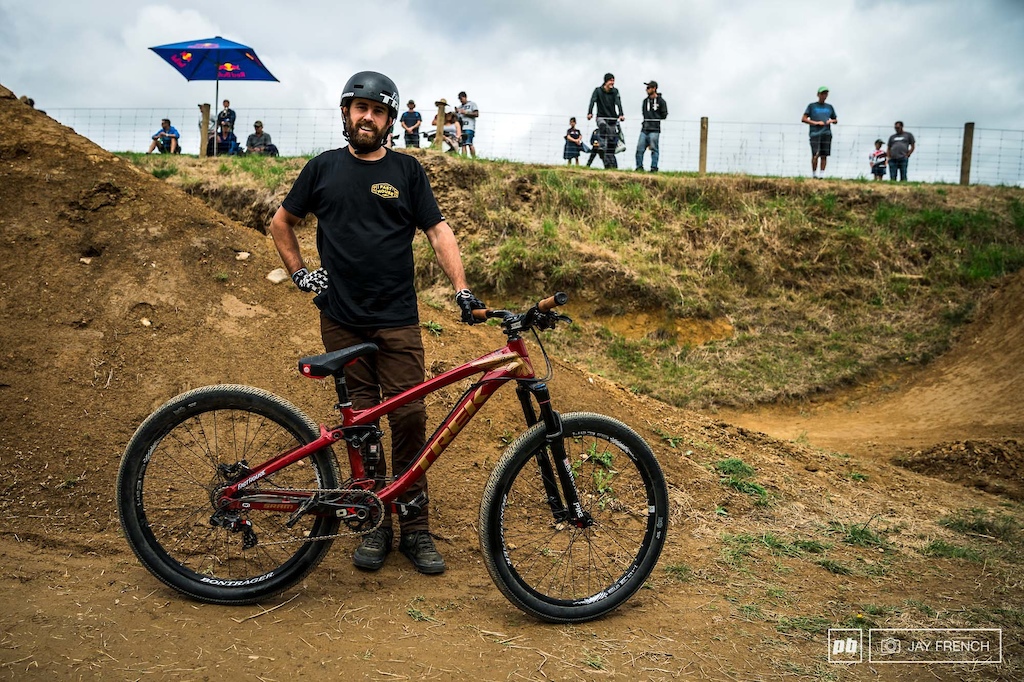 Ryan R-Dog Howard with his Trek. 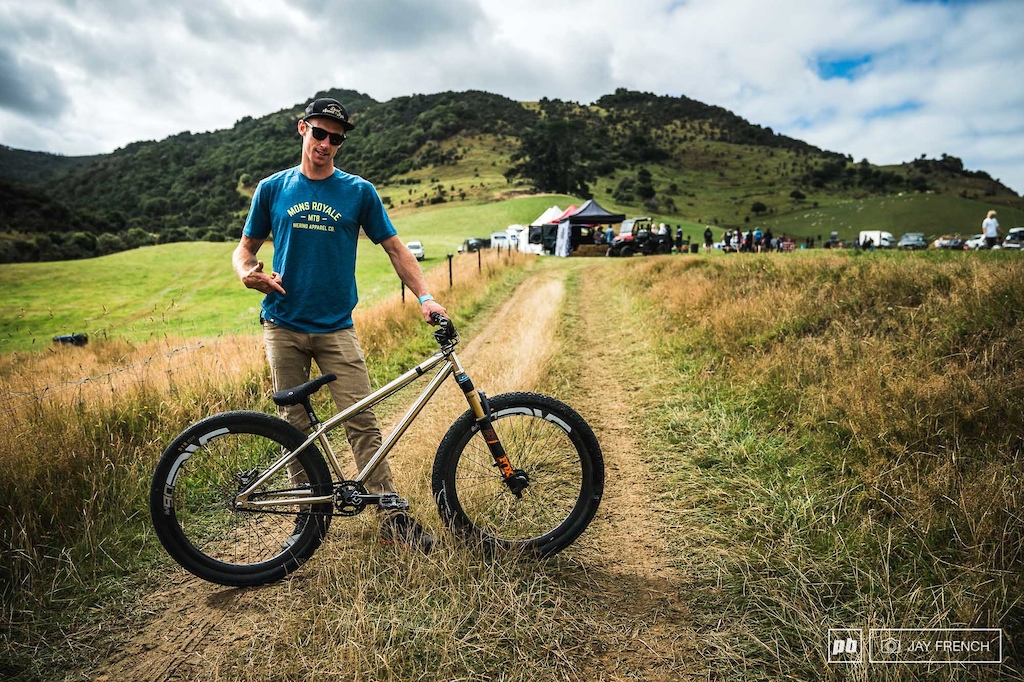 Conor Macfarlane and his "mate built it" bike 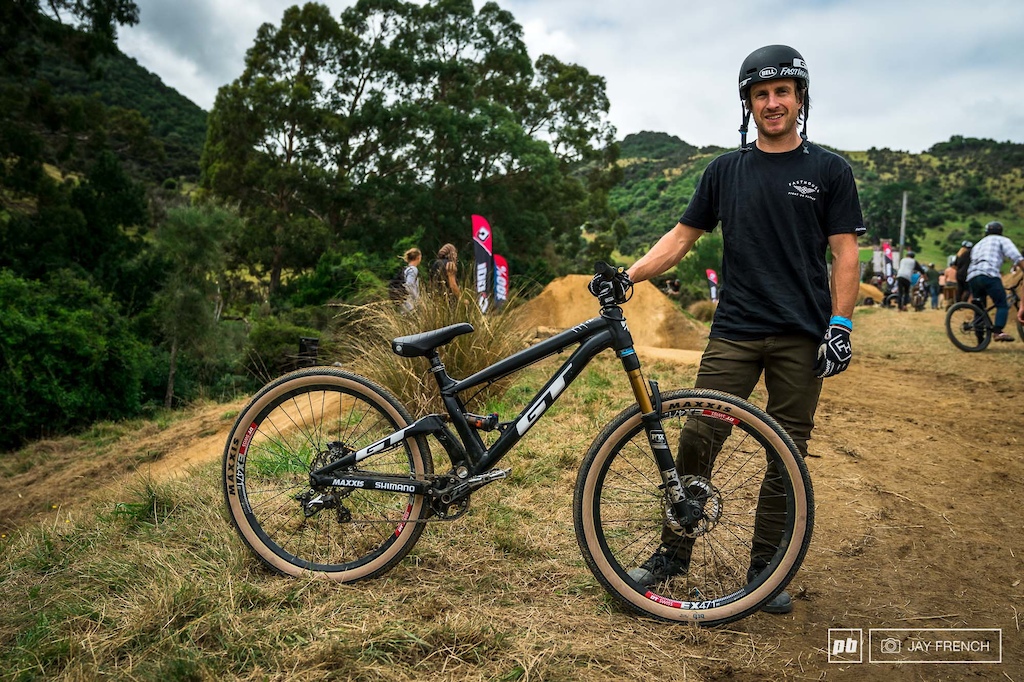 Tyler McCaul with his GT 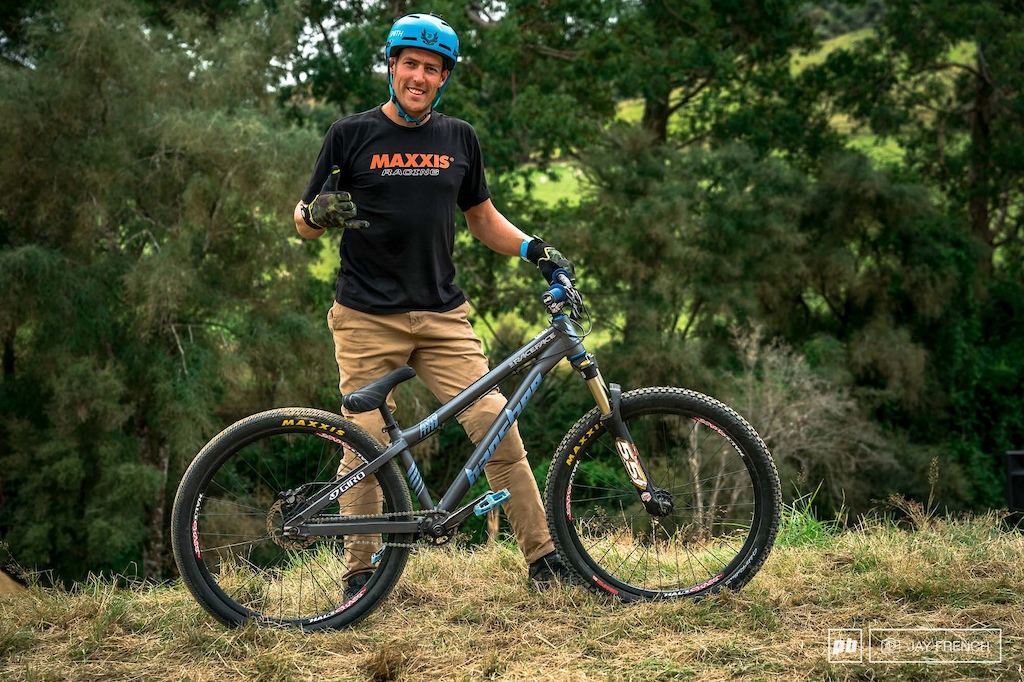 Emmerson Wilken and his Banshee 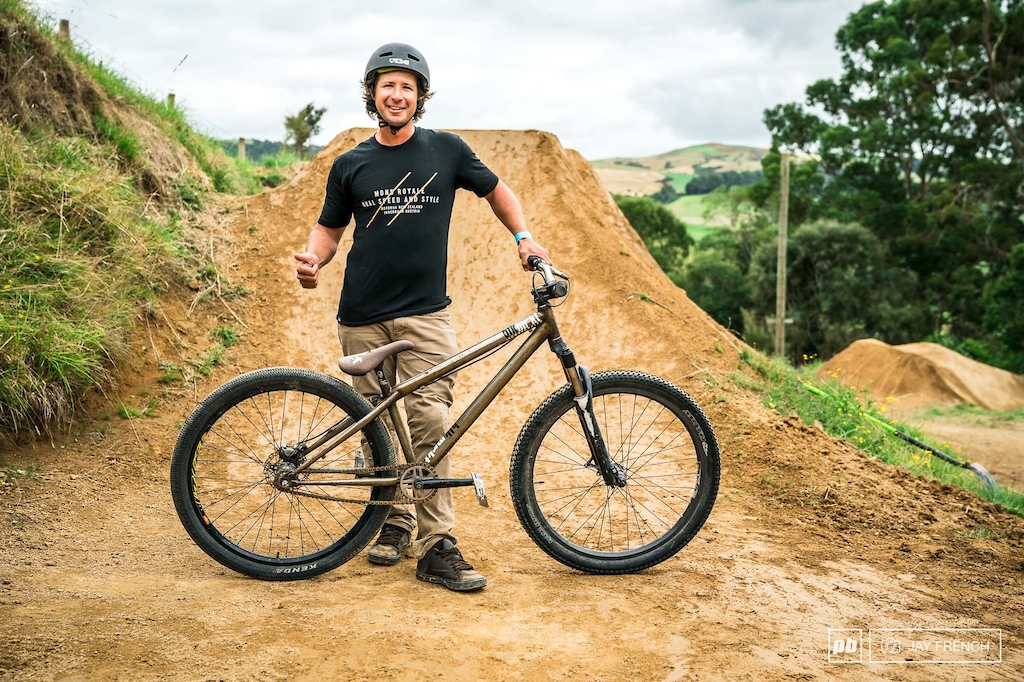 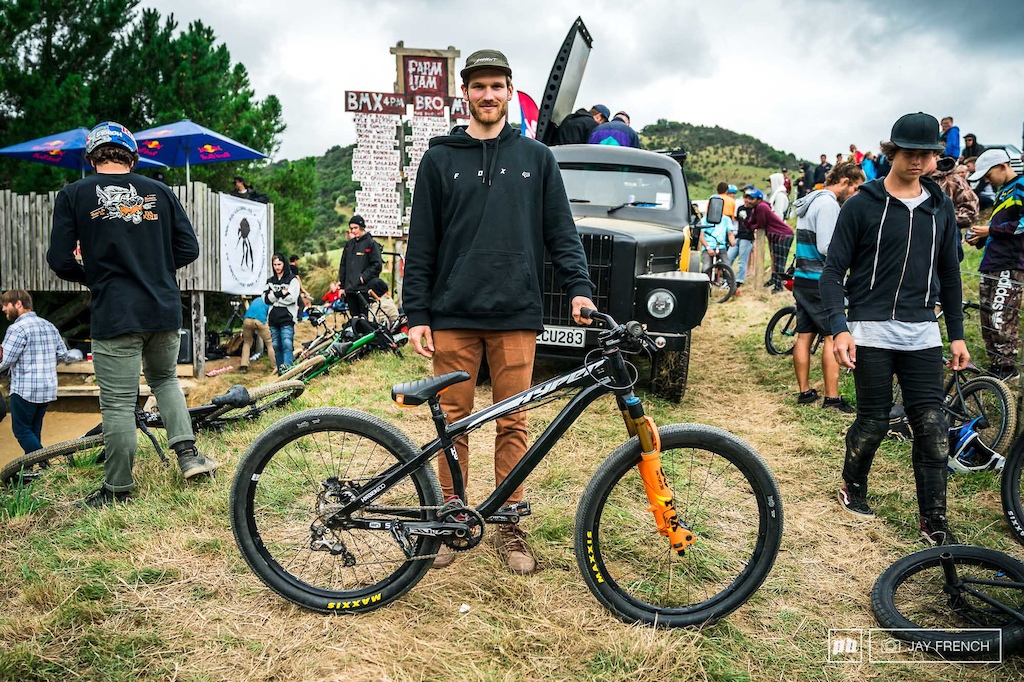 Bas Van Steenbergen and his Hyper. 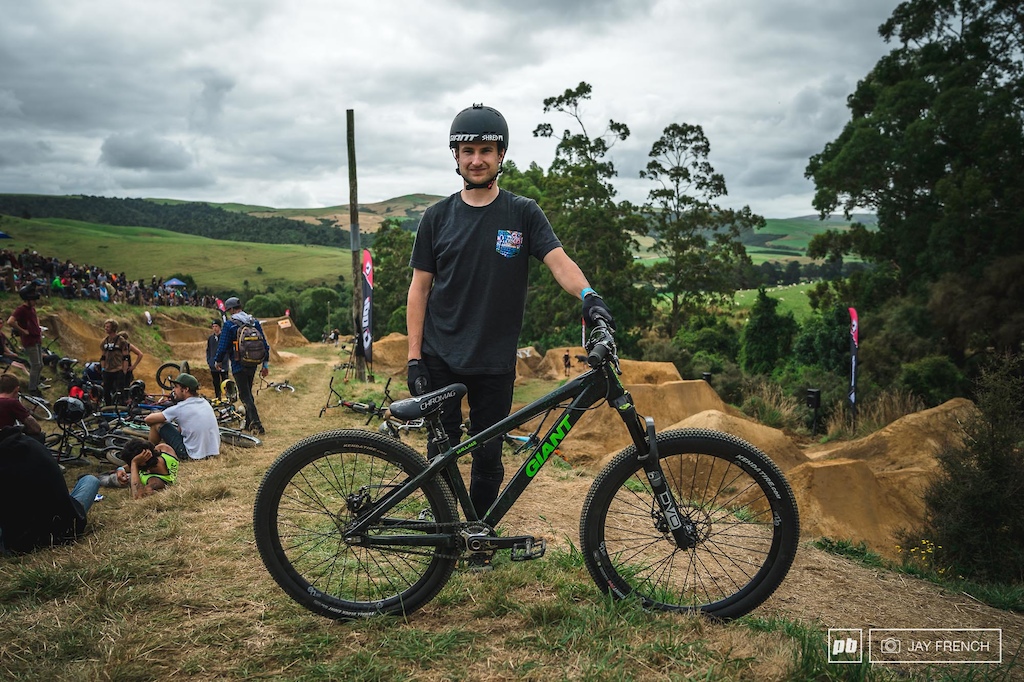 Reece Wallace with his Giant 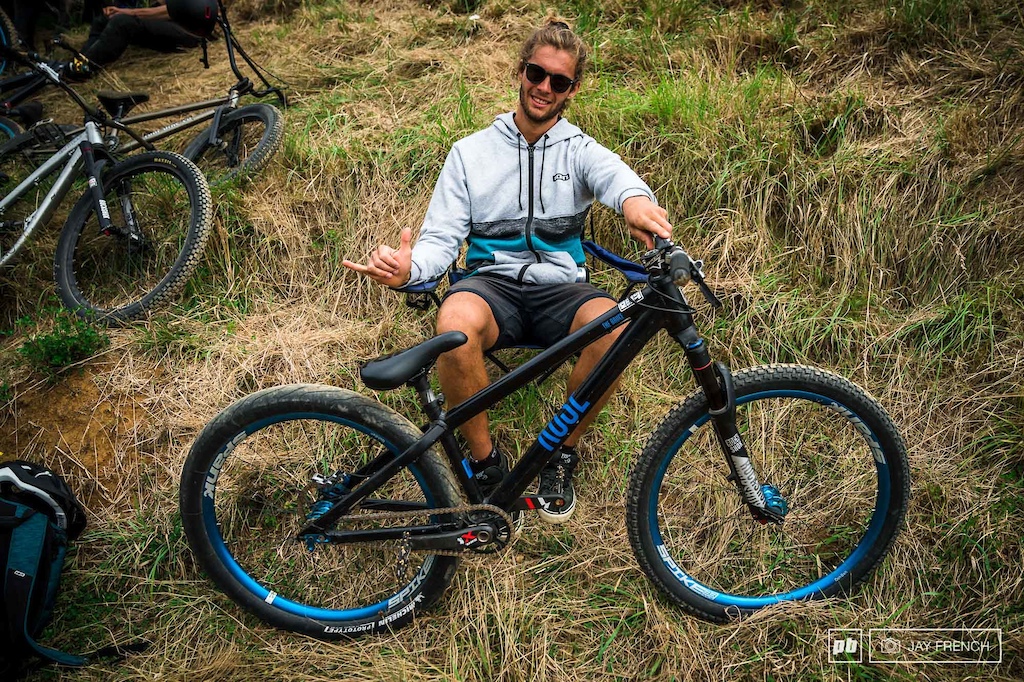 
Posted In:
Reviews and Tech

Patrick9-32 (Feb 5, 2018 at 1:35)
The problem is most of those brands don't make a dirt jump bike. They are either hacked together from other bikes or rebranded other machines or just quickly built without the time taken for styling.

carson-storch (Feb 5, 2018 at 18:07)
@Sokolowski: no sir, it’s version 3 of a prototype slope frame. Now based off of the new altitude’s tubing/ suspension platform, with custom geo.

N-60 (Feb 4, 2018 at 21:25)
@vinay: I guess, but it does indicate that slope/dj bikes are on the decline, which kind of sucks, they're mad bikes. That being said, I've never bought a true jump bike, so it's a mildly hypocritical complaint.

vinay (Feb 4, 2018 at 23:49)
@N-60: Yeah, but going back to your original comment, I don't think it matters too much that these riders ride non-standard bikes. In DH athletes have started to ride more "production" bikes and the production bikes are actually similar to the WC race bikes (unlike Commencal in the Atherton era or the Iron Horse Sunday Sam Hill was riding). But in DJ, I don't think these riders on their non-standard bikes really have an equipment advantage over someone who rocks up with a production bike. Then again if you meant to say, companies aren't interested in selling the bikes showcased by their sponsored riders then yeah that is a bit awkward. But it also depends on where you're looking. It seems like certain German companies are still releasing loads of these. Isn't YT bringing back the Play too? And more of these brands are coming to North America too. Then again DMR seems to have shifted their focus. Which isn't too odd when you think about it. They always claimed to make the bikes they wanted to ride themselves. So as the owners grew older, wheel size and suspension grew along.

But my point was, you still have plenty of choice and we still vote with our wallet. If more people buy these, more companies will start making them again. Personally yeah I have bought a dj bike to safe the vulnerable bits of my mountainbike from the abuse. But agreed I don't use it that much anymore. One because I don't ride dirt or street often anymore. And two because a bmx (which I have too) quite simply often proves to be good enough too.

makdthed (Feb 5, 2018 at 3:30)
@vinay: Events and sports, like this and downhill etc, are showcases, to get the brand name out there - these sports are watched by a wide variety of riders, most of which won't be or want to be dirt jumpers, but will take note of the brands being showcased and what and who the riders are sponsored by, and thats the end goal, not to get people dirt jumping, but spread the brand name.

WAKIdesigns (Feb 4, 2018 at 22:57)
Can someone throw me a bone over this: aren’t carbon rims quite bad for relatively high pressures used in Dirt Jump bikes? Connor MacFarlane has Enves over there. Wouldn’t 50psi + make the rim explode from the inside considering majoroty of fibers used in it are unidirectional?

davidrobinsonphoto (Feb 5, 2018 at 3:11)
Not sure it applies here, but people are running 110psi in carbon roadbike clinchers...

Triber66 (Feb 5, 2018 at 5:24)
Well,(can’t believe I’m saying this) Waki may be right. I recall seeing something along those lines, not to run too high a pressure with a carbon rim, I can’t remember which brand it was though. @Smokey79:

WAKIdesigns (Feb 5, 2018 at 6:15)
@davidrobinsonphoto: yes there is a theoretical difference and that is the tyre volume and rim width. However I would like to know if someone had experience with this. Like a mechanic who has seen a lot

For what its' worth I now run 65PSI in my 2.3 tyres on ZTR Arch MK3 rim while max pressure according to ZTR is 39. But alumnium is a different beast.

WAKIdesigns (Feb 5, 2018 at 9:36)
@aw-gooner: dunno, but the Killswitch is one of the best looking mountain bikes ever, off course in my books. That Goldie Mercedesy Trek belonging to Semenuk looks tits, but Killswitch has the pure function bad assness about it. And then they made the Roam that takes all 3 wheel sizes... it kills business.

da-gooner (Feb 5, 2018 at 11:07)
@WAKIdesigns: I hate to admit it but I couldn't agree more. Blk Mrkt was killing the game at one point. Too bad Carter made some business mistakes and failed to keep riders on his team. I hope it isn't too late to see a comeback.

carson-storch (Feb 5, 2018 at 18:05)
The first two Prototypes were based off of the 2016 aluminum thunderbolt, with the stock front triangle & custom chain stays/ rear end. This prototype actually used the new altitude tubing and rear shock platform, and is full custom geo... just same tubing! Cheers

bilsmy (Feb 5, 2018 at 6:51)
Maybe it's just me, but look at the slack in his chain, I'm surprised it doesn't fly off. I do like that it gives a feel of "run what you brung" reminds me of my drag racing days and our crappy old cars. Did it because you loved it, good times!

southoftheborder (Feb 4, 2018 at 18:29)
Has anyone seen a Hyper bike in the flesh, besides the ones being ridden by their sponsored riders?

da-gooner (Feb 5, 2018 at 9:21)
@lumpy873: theres a few out there that DVO actually made as a Diamond DJ. But I've seen people do it themselves.
Below threshold threads are hidden

FrozenTreads56 (Feb 4, 2018 at 17:17)
Bizet didn't feel like riding because he was still upset about getting robbed at rampage? hahaha
anyway sick like up and good bunch of guys