Terrace is a Central BC town of approximately 20,000 people that most people think is in the North. Known by outdoor recreationalists for its fishing and Shames Mountain - a small ski area with incredible backcountry terrain run as a coop. What most people don't know is that Terrace has some pretty great mountain biking trails!

When we first visited North Central BC and wrote about it in the longest trip report on Pinkbike ever Terrace only had a limited number of trails on Terrace Mountain and a bunch of older (but beautifully maintained) legacy trails in Copper Mountain. Since then the Terrace Off Road Cycling Association (TORCA) (general info and TORCA facebook) has been busy! The Terrace Mountain trails are pedal accessed and have been expanded under TORCA's efforts with aid from the provincial government and the City of Terrace which has supplied funding for paid trailbuilding to augment volunteer efforts. TORCA is also making efforts to inventory trails in the Copper Mountain area which will open the door to more funding and more help from local and provincial government to further expand trails. Truly a success story in governments working with private volunteer mountain biking groups to make things happen.

With sun in the forecast and with the support of Northern BC Tourism we booked a flight on HawkAir and headed from Vancouver to Terrace on a short flight for a long weekend.

Big lines at the competition, none at HawkAir - fly those friendly skies.

Great views of the Coast Mountains on this flight. In less then 2 hours we were stepping out onto YXT - Terrace's airport

In Terrace we met up with our friend Tyler Wilkes who (along with many other young, hungry British Columbians) made the move North to build careers in the resource boom. Tyler's been steeped in trail advocacy through our efforts and is the trails director for TORCA helping coordinate funding efforts among other things. We managed to instill a liking for exploratory hike-a-bikes in Ty so he was keen to do some pleasant rambles to lesser known areas.

Our first ride took us 32km up the Nisga'a/Nass Highway to Maroon Mountain - a popular trail that accesses alpine and also purportedly has great views of the Wesach group and Kalum Lake. . Tyler assures us there is a good trail there into the alpine! And it was a good trail. A note that there is one section that was destroyed by blowdown from an icestorm from a couple of years ago which makes for a sporty bushwhack. There's some other random blow down also on the trail but all-in-alll its a nice mostly hike to the sub-alpine interspersed with the odd pedalling section. We pushed/rode up 1000m in 6.4km, then we rode down smooth buff fast trails with the odd bit of chunk!

The alpine reward is a long traverse around Maroon Mountain to a small lake which is apparently cold but is worth the swim on a hot day. Unfortunately we started late and felt weather coming in so cut short the traverse halfway leaving further exploration for Tyler's next trip.

Maroon Mountain - Terrace BC from Lee Lau on Vimeo. 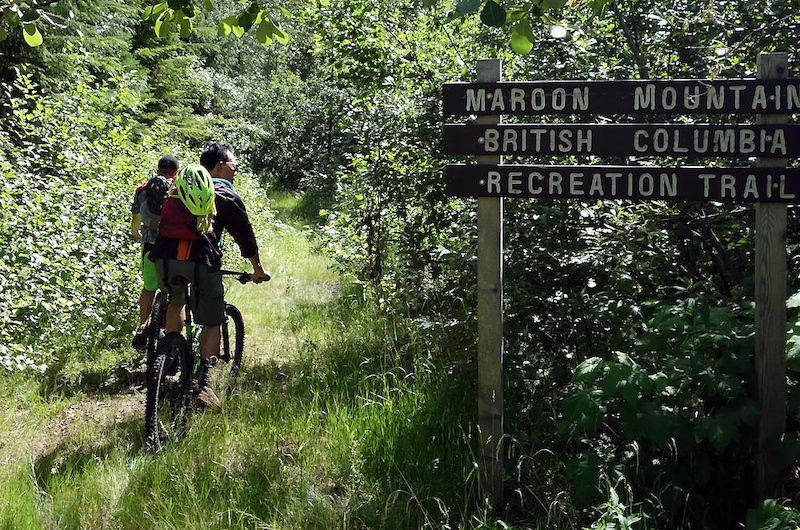 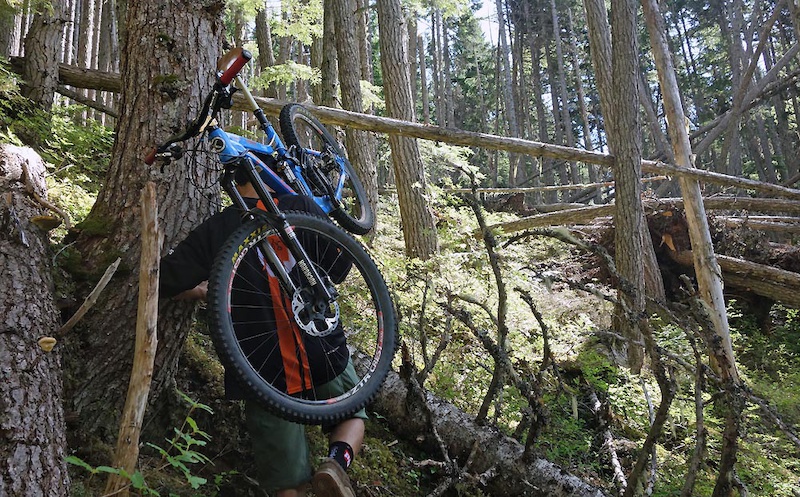 Big blow down due to an ice storm in 2012 that at first glance looked like a massive avalanche went through the area. 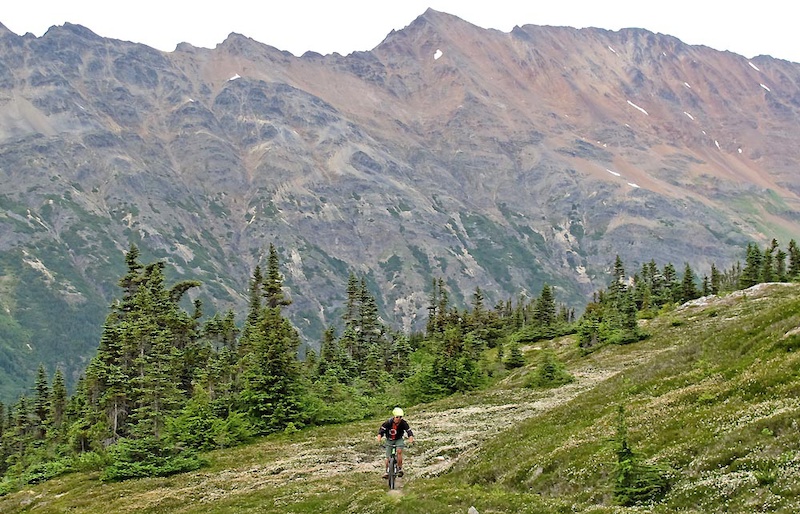 Nice view once out of the trees 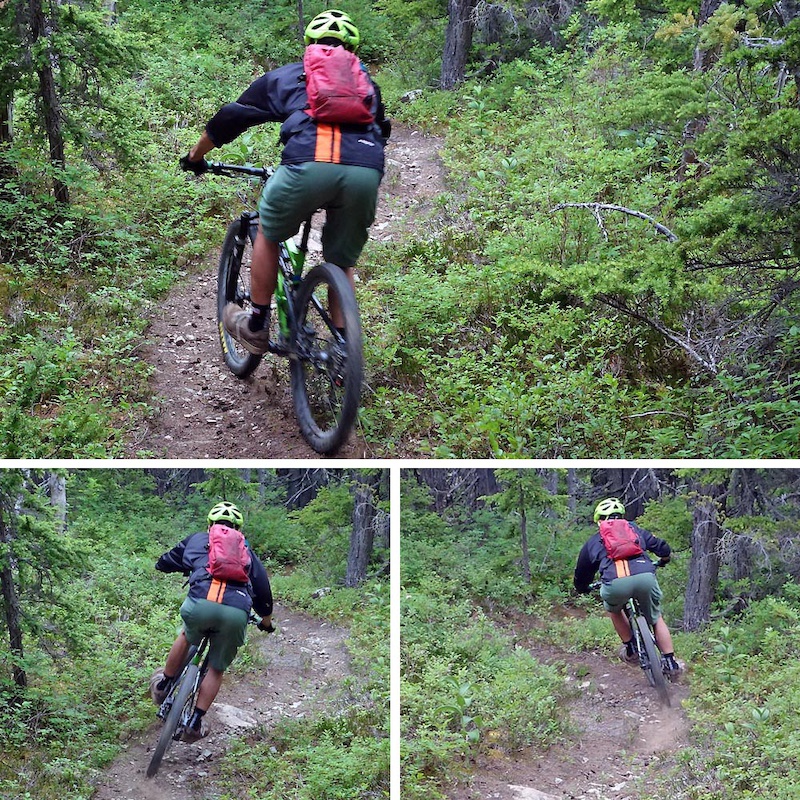 The next day we checked out the new Steinhoe Ridge trail. As a sidenote it's worth expounding more on something we touched on in the article about Economic Impacts of Mountain Biking Tourism. Will the Steinhoe trail be a draw for tourism? Will Maroon? It's doubtful. People come to Terrace to work (the economy is booming) but its our submission that people choose to stay in Terrace because of trails, because of the ski hill, because of the fishing. Generally speaking people who live here like the outdoors. Trails help build a community; they attract engineers, skilled trades, families and small business-owners. The bike culture in Terrace was already there. With the support of TORCA by local government the local bike scene and bike culture will become stronger; the trail system larger and more diverse. More people will get into biking and that will then reap benefits in community participation..

Speaking of community support the Steinhoe trail's construction started in 2011 with funding from various groups such as the City of Terrace's Community Forest Fund and sped up in a big way by a $ 120,000 grant from a Province of BC job creation program. Most of the trailwork was finished by hand. Trailwork is now supported by many parties including a local provincial government champion, Carl Johansen of the Ministry of Forests which has allowed TORCA to hire with paid trail builders and a mini-excavator machine.

TORCA hopes to have the Steinhoe trail finished this year. The list of builders and supporters is a who's who of the local bike community; Tony Moore and Dave Stewart (both 20 year builders, Kim Hayworth, Shane Spencer and Ted Mccreary; among other notables, . This 7.2km trail climbs 306m and descends 242m from Springcreek Ave to Kitselas Rd adding an accessible number of loops to trails close to Terrace and joining other trail systems that were formerly stand-alone. This includes the Terrace Mountain trails and the 7.5km Flathead loop; the go-to quickie ride from town which we rode last time around. 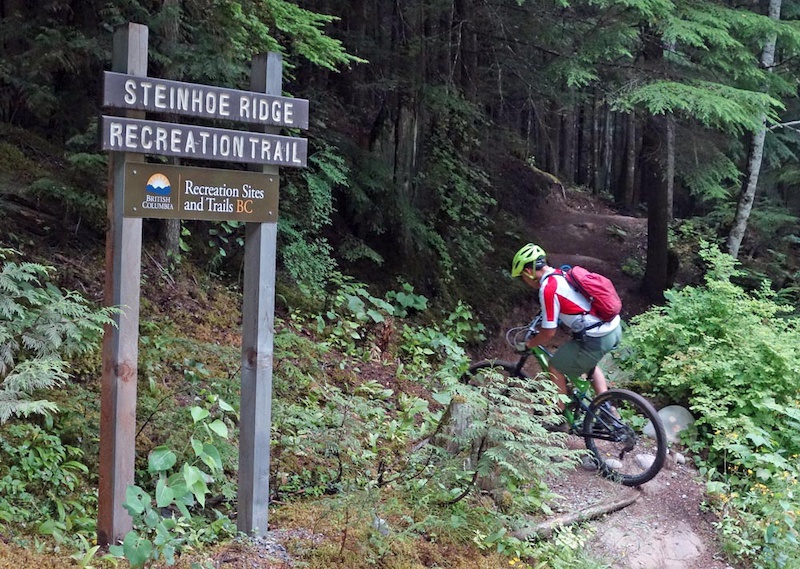 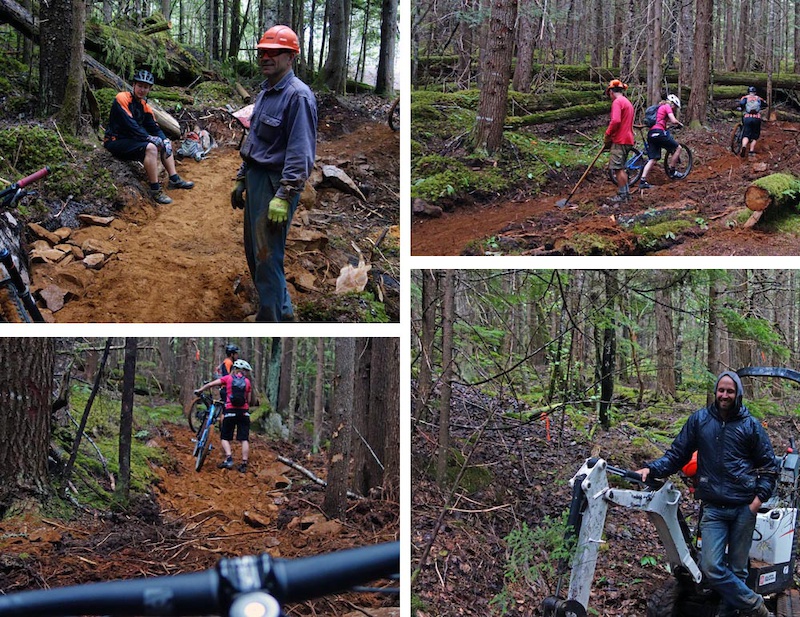 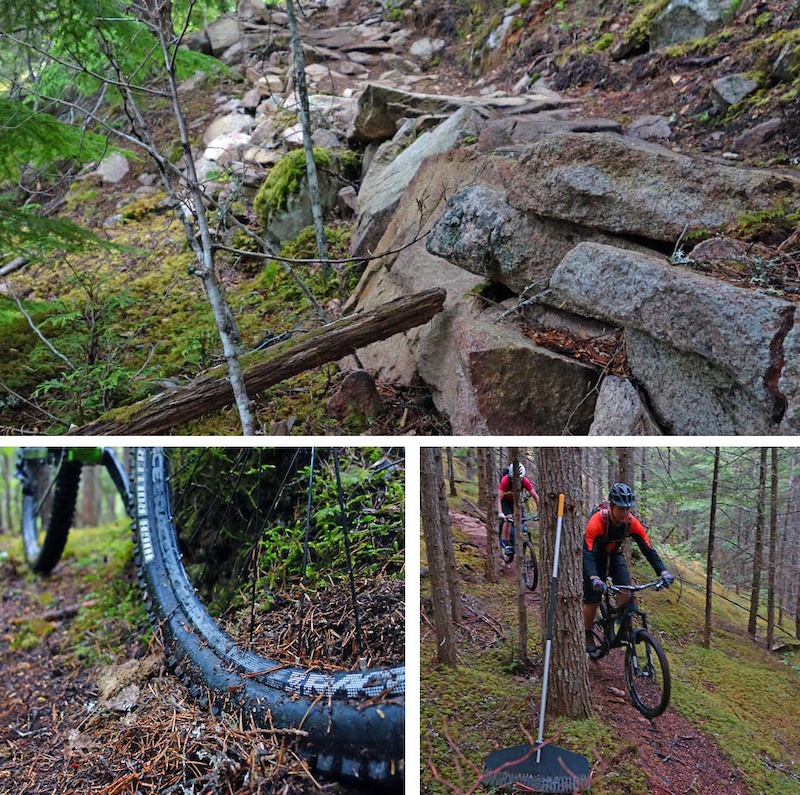 Bomber rock work, trail in progress! Duffey section. The rake is so appropriate 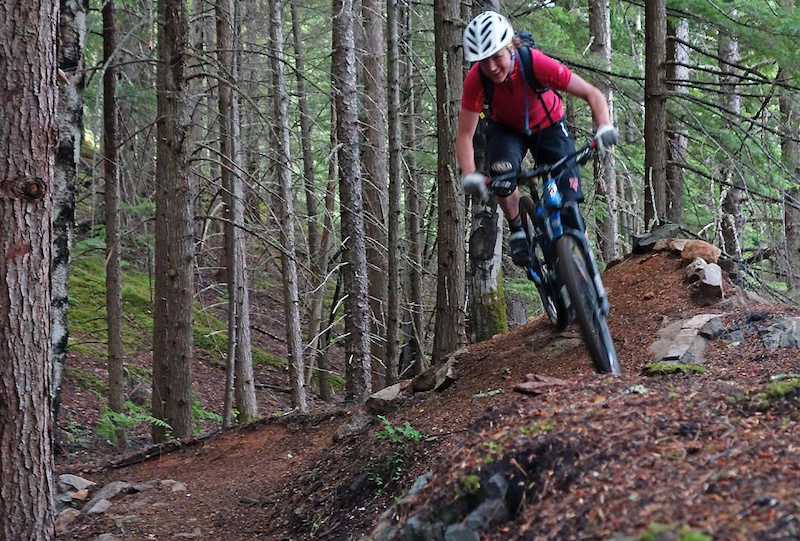 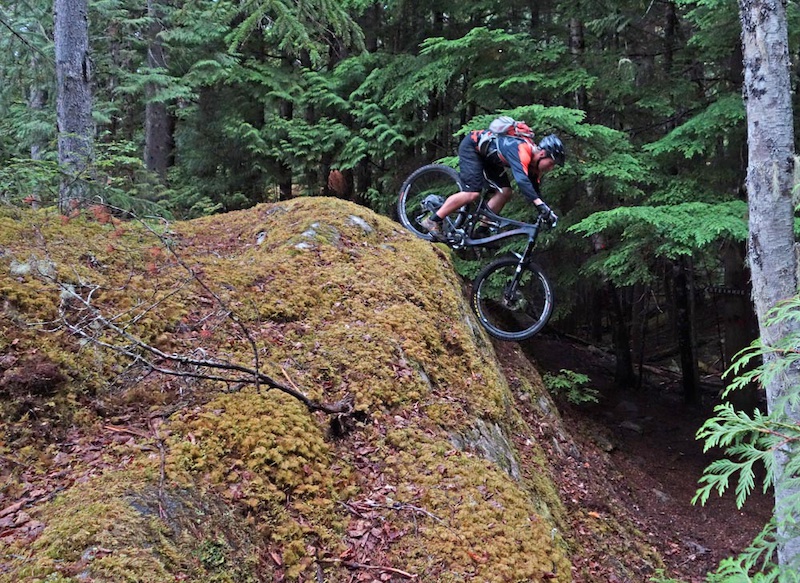 Tyler showing off for the camera 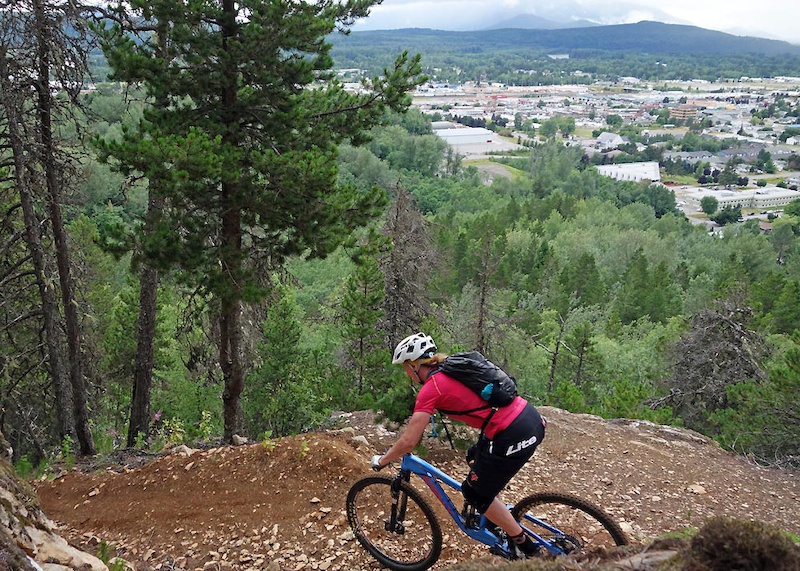 Wheel of Fortune descends back to town. The soil changes remarkably quickly from loamy buffness to rock slab tech 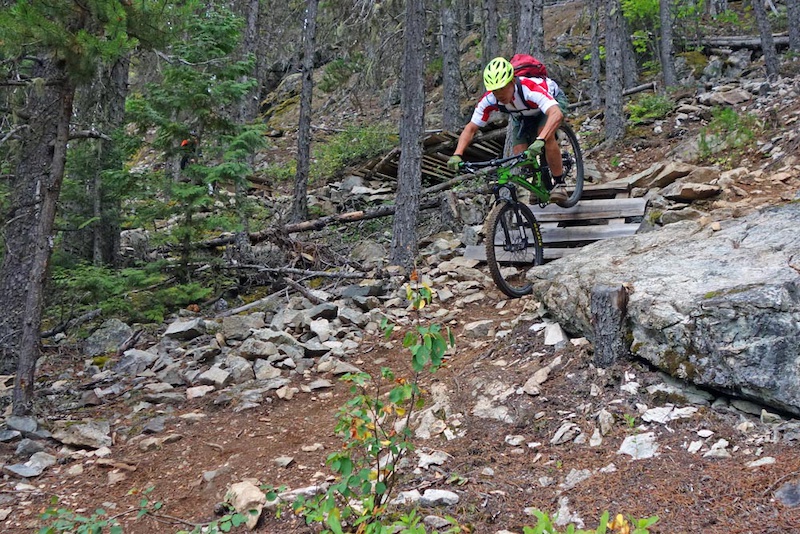 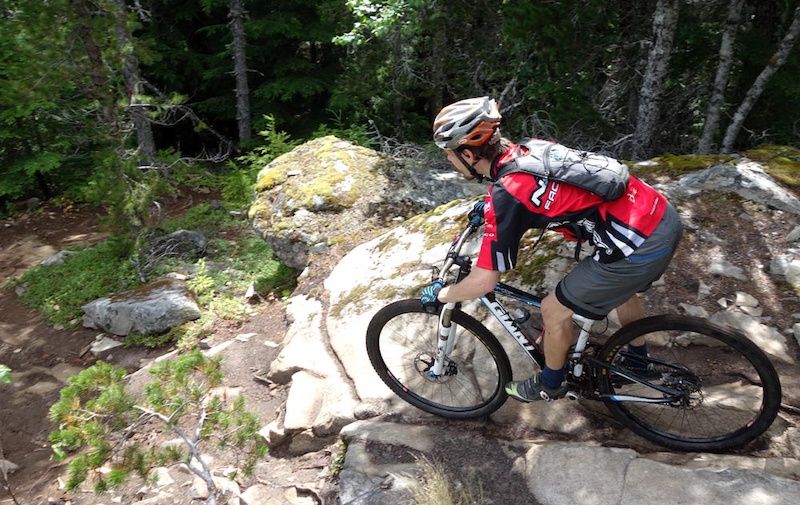 In the subdivision of Thornhill is a small area called Copper Mountain (doc files). There are 18 named trails. Dedicated maintainers include Richard Blanes, Wade Muchowski and others. The builders and riders have been active here for over 20 years; the trails are STEEP and since there aren't a lot of people who ride Copper Mountain they're in great shape!

It's hard to describe how special these trails are. To North Shore old-timers the hardest Copper trails are like the old steepest trails but with soft pine-needled duff carpeting the fall-line. Bombholes are pretty much non-existent (you need crowds to cause bombholes). The trails have rooty tech so that keeps all but the kamikaze suicidal off the steepest when its wet and with lots of snow in town the entire system is shut down for half the year thus relieving even more erosion concerns.

We rode Copper twice both times as odd-man out shuttles. A vehicle that is capable of decent off-road performance is a nice-to-have since the access road is pretty loose and steep.

Copper Mountain Terrace BC July 2014 from Lee Lau on Vimeo.


On our first day we rode

On our second day we rode 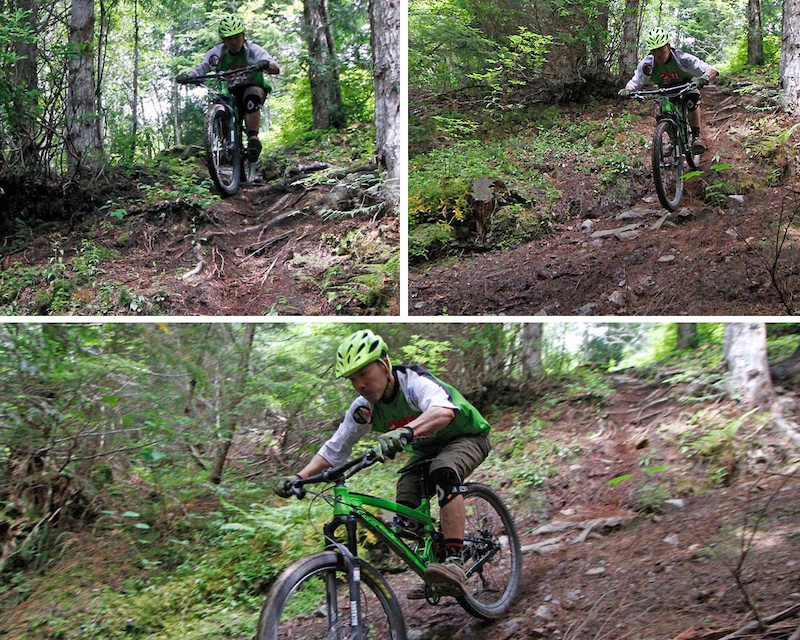 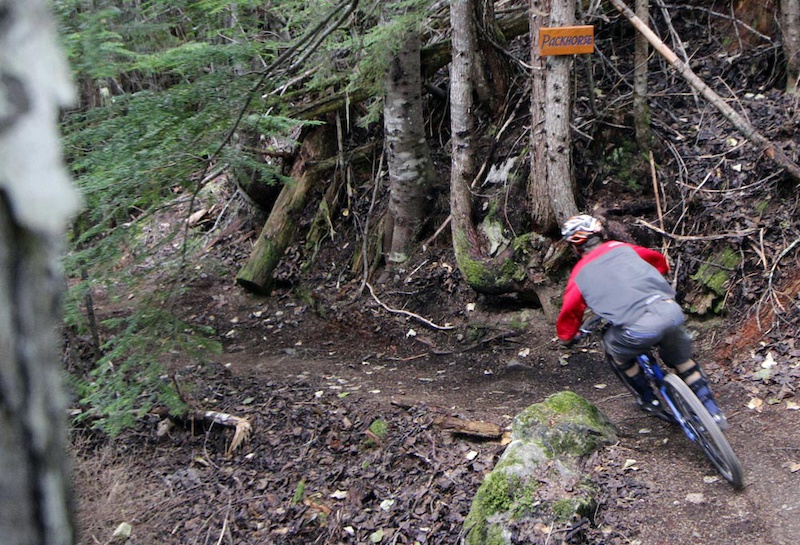 Maps of the areas that we rode

You can easily spend a good part of a few days exploring the trails of Terrace. The Terrace Visitors Centre website can give you ideas where to stay and eat. McBikes of Terrace can provide trail information as can the TORCA Facebook. Hawkair can get you to Terrace (or Smithers or Prince Rupert) from Vancouver.

Copper Mountain is on the lower right hand side. Steinhoe to T2 and the Terrace Mountain trails are in the centre

CMDS (Aug 31, 2014 at 8:51)
Loved this article! Being from Prince George, I didnt realize the scope and variety of trails so close to home. Awesome work guys!

wideload46 (Aug 31, 2014 at 12:49)
Ahhh Terrace, unfortunately I haven't biked there yet but the skiing is unbelievable & the people are incredible. I echo SithBike, if you're going to make a road trip out there, you gotta hit Burns Lake & Smithers (not too sure what Houston has but I'm guessing that there's something there, anybody know?). Great article & pictures!!

dikhammer (Sep 2, 2014 at 9:43)
from what i understand houston just went through a planning development stage and has a trail network planned. as far as existing trails im not sure what they have to offer

ragin-sagin (Aug 31, 2014 at 10:06)
I lived in Kitimat for four years - riding on terrace mountain and copper was a treat. Some of the funnest trails I have ridden in the world. A hidden gem made possible by some hard working local shredders and advocates such as TORCA.

zokinjo (Aug 31, 2014 at 13:59)
Hi guys, for the last 10 years I am coming to heliski in this part of the world. Actually to the Last Frontier. Usually we land in Terace before we drive to Stewart BC and I was wondering what the mountain biking could be here in the summer. After this article could be that I will start to travel over sea also in summer... You made my day. Thx for this nice article!!!!

leelau (Aug 31, 2014 at 14:31)
Last Frontiers' terrain is mind blowing. You will have a great time. Northern BC is incredible; you have excellent taste

cerealkilla (Aug 31, 2014 at 14:19)
Um, the town is closer to 12,000 than 20,000. Come on guys, just a quick google search to avoid some embarrassing edits. TORCA is awesome. After ride, grab some locally sourced tex-mex inspired food at Don Diegos, or some Indian food at the Hothouse! Great pie at the Bear Country Inn!

leelau (Aug 31, 2014 at 14:24)
Cereal. From Statscan the City proper is approx 12,000 but including areas outside the City the total population is approx 20,000. That number doesn't include Kitimat, Prince Rupert fyi

cerealkilla (Aug 31, 2014 at 16:52)
I have never made a mistake in anything I have ever written. Leelau, you should be flogged. I am sure the people of Terrace are furious

Great write-up though, the place deserves the attention you give it. People are so nice, they often greet strangers on the street. Btw, if you include the two census districts that cover Terrace, Kit, and PR, it's about 37-38,000 I believe (Smithers is outside this zone). And, the only really well developed riding in the area is in Terrace. Just a few roughed in trails in Rupert, so anyone that loves to ride in the region does indeed come to Terrace. Fly up, catch a fish, paddle a creek, pedal a line. It offers a lot to the multi-sport escapist.

SithBike (Aug 31, 2014 at 23:00)
But you can't forget Moab & South Cal either, and everywhere not mentioned. Because that is what free ride is all about. If you say one place is better than the other to mountain bike, then you are just not getting it.

dikhammer (Aug 31, 2014 at 10:43)
great article lee! if anyone ever makes it out this way and wants to check out copper you can get a copy of the trail map from my pinkbike page or hit me up on facebook- richard blanes

mammal (Aug 31, 2014 at 8:31)
Thanks for opening up the rest of BC to us, Lee. I love the perspective into the corners of BC I may have never explored. So much great riding everywhere!

boomforeal (Aug 31, 2014 at 10:10)
why write an article about riding in north central bc and only post videos and pictures of yourselves on cbc?

Bigdave46 (Sep 1, 2014 at 18:37)
best advertisement for home trails! nice idea! trails look like they would have a lot of fun optional lines

dikhammer (Sep 2, 2014 at 9:47)
if you wanna see your mom trail, go to youtube and type in the search copper mountain terrace bc

leelau (Sep 3, 2014 at 9:08)
EIT's are in demand but I think that much of the hiring is Vancouver but some is local. Stantec, SNC, Golder are in the area. Send me an email via PM

wideload46 (Sep 3, 2014 at 12:25)
Racerface; What is your discipline? Mechanical, electrical, civil, chemical? Tons of jobs coming up in Kitimat if LNG goes full hog like it's suppose to. Not a whole lot in Terrace itself or Smithers but there are mines in the area. Further east in PG there are 3 pulp mills & a couple of chemical plants.