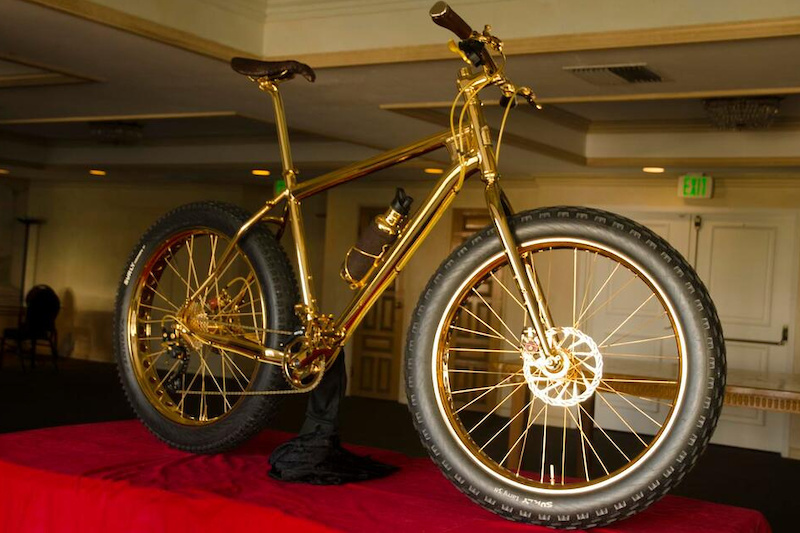 The base frame is a Salsa Mukluk fat bike (current MSRP $2,799 USD) that is overlaid with 24k gold. On top of the frame, you get a menagerie of finishing details including Italian red leather in the rim, brown chocolate alligator skin on the seat, brown chocolate cowhide grips and a stingray skin water bottle. Finishing off the bike is the emblem that has 600 black diamonds (6.0 carats in total) and 500 golden sapphires (4.5 carats in total) embedded in it and is designed to be a standalone piece of jewelry. There's also a signature piece of 24k solid gold at the back of the headtube that features the signature of the creator. 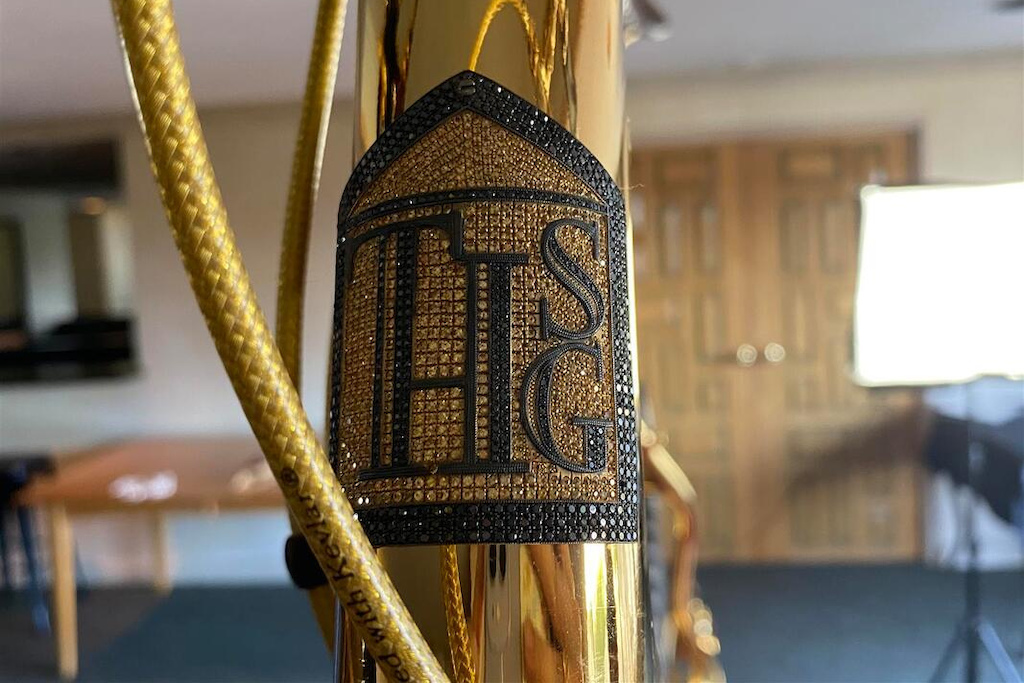 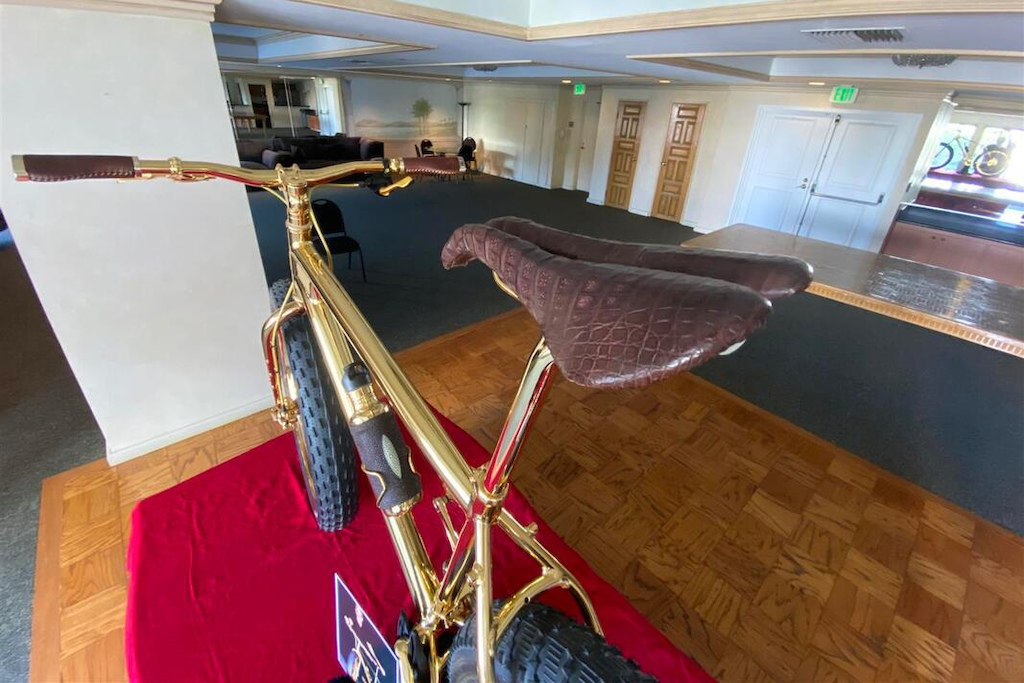 That creator is a man named Hugh Power. After a career working as a deep-sea diver in Alaska, the Gulf Of Mexico and Tahiti, he returned to Beverly Hills to being creating Tahitian pearl jewelry then later used his knowledge of jewelry to found The House Of Solid Gold and Gifts Of Gold. These companies both specialise in producing golden objects and his piece de resistance was this golden mountain bike.

The whole thing came together over 2 years with 750 man-hours of work invested into it. At the time it was reported that 13 of the bikes would be produced however subsequent stories about the bike have called it a one-off so we're assuming only one of those ever got made.

So, what happened next?


Well, the bike is still for sale and it's still for 1 million dollars but this time it's not being sold by Hugh Power. Power passed away in 2017 at the age of 51 and left the bike behind without a home. It seems his son has now taken on the task of trying to sell it but instead of trying to entice a rich sheikh or tech billionaire, he's instead donated it to charity and it will be sold in aid of the Institute for Education, Research, and Scholarships (IFERS) and the Personnel Efficiency Foundation (PEF). 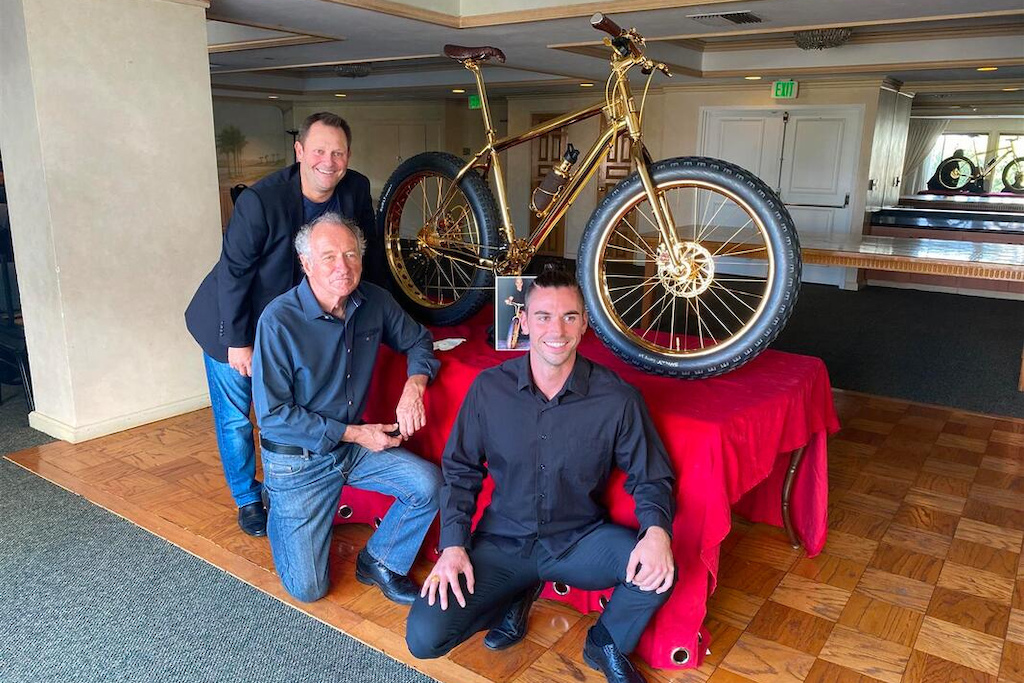 IFERS was founded in 2004 and describes itself as a "nonprofit public charity organization dedicated to improving society by conducting scientific and social research." while PEF "helps to revive the economy by increasing personnel efficiency at workplaces, and to help civic groups to improve the communities." The advert does not make clear how much of the sale of the bike will go towards funding charities but it does stress that the sale proceeds will be 100% tax-deductible in the U.S.

The bike is apparently fully functional although it will probably be left as an art piece if it does find a buyer. Anyone interested in purchasing it should email or phone IFERS.

fullfacemike (Oct 2, 2020 at 9:09)
I feel like $1 million and 750 man-hours could do a lot of good in the world if it didn't need to pass through a gold-plated fat bike first. I'm glad it's eventually going to charity but... It could have just started there.

lognar (Oct 2, 2020 at 9:44)
@plyawn: total collective playtime for the CoD franchise was 25 billion hours in 2014. The Modern Warfare game had 500 million hours of play time just 50 days after launch. I bet the franchise is closer to 50 B now. I cant find current numbers so... if anyone does im real curious

Curse-of-the-foot-long-sub (Oct 2, 2020 at 15:21)
i feel like the sales pitch for a million dollar bike could've been slightly better

slimboyjim (Oct 2, 2020 at 11:14)
If it was a fatbike to be used in the real world I'd get it - people want simple mechanical repairs when in remote locations. Plus if it was to be used across both hot (sand) and cold (snow) locations would the variation in temperature play nice with hydraulics?

Maestroman87 (Oct 2, 2020 at 13:53)
@slimboyjim: It's a non-issue for the dot fluid in my Hope brakes on my fatbike. -20C vs 30C doesnt feel much different except for the first pull maybe. Shimano mineral oil does feel a bit sludgy at the lever in the. None of this really matters though because they both still work fine.

the-one1 (Oct 2, 2020 at 11:22)
ahhhhhh, they look so proud of their creation....kind of like the 5 year old who shows his mommy the macaroni art he made in kindergarten, it looks like shit but the 5 year old thinks its a Picasso.

Finally a bike out of reach for dentists, unless the have won a lottery or something.

salami (Oct 2, 2020 at 10:47)
I saw three of these parked outside the local Starbucks this morning, which tells me only one thing. There's too many self-Indulgent wieners in this city with too much bloody money!

YoKev (Oct 2, 2020 at 21:53)
The Guinness Book I think would confirm, on display here(not even including the 'bike') is the highest concentration of douchebagery ever assembled in such a confined space. Starting with the name 'Hugh Power', followed up with DB #2's pose in the opening still in what appears to be a video, followed by DB #3's 'do, and sliding into home plate with their collective expression(s) in the final photo, demonstrating that they are TOTALLY oblivious as to just how big a piece of petrified dog shit they have there

This is what proceeds from the sale of it are going to. Am I the only one who's picturing guys in tanks like with wolverine out of x men?

vjunior21 (Oct 2, 2020 at 9:16)
The people that decided to make that bike would likely be the commentators for NBC if we have to watch the world champs on NBC and not Red Bull TV. I.E. they don't know anything about bikes.

usedbikestuff (Oct 2, 2020 at 11:45)
I’m sorry but even my modern art needs modern geometry. This just looks too dated to even display.

disruptiveone (Oct 6, 2020 at 15:25)
Kevin and his "seal skin" pitch is fkn annoying, Perhaps he should ride a mtn bike and not try and be a TV commercial guy. I skipped part and when I got to his fkn annoying "seal skin" water bottle..that was it. Enough of this crap. How about auctioning off the bike starting at $100 and selling for what you can get for it. I doubt you'll get $1M for this. Gold plating rubs off, tarnishes or fades so really, take what you can and run.....